At Thursday’s Board of Education meeting, about 20 people gave feedback – good and bad – on impacts of the new school start times.

Though there have been just eight full days of school since the change was implemented, parents had strong views.

But despite kinks in the bus scheduling and challenges scheduling sports practice and competitions in other towns, feedback was overall very positive on the benefits to students of the extra hour of sleep. 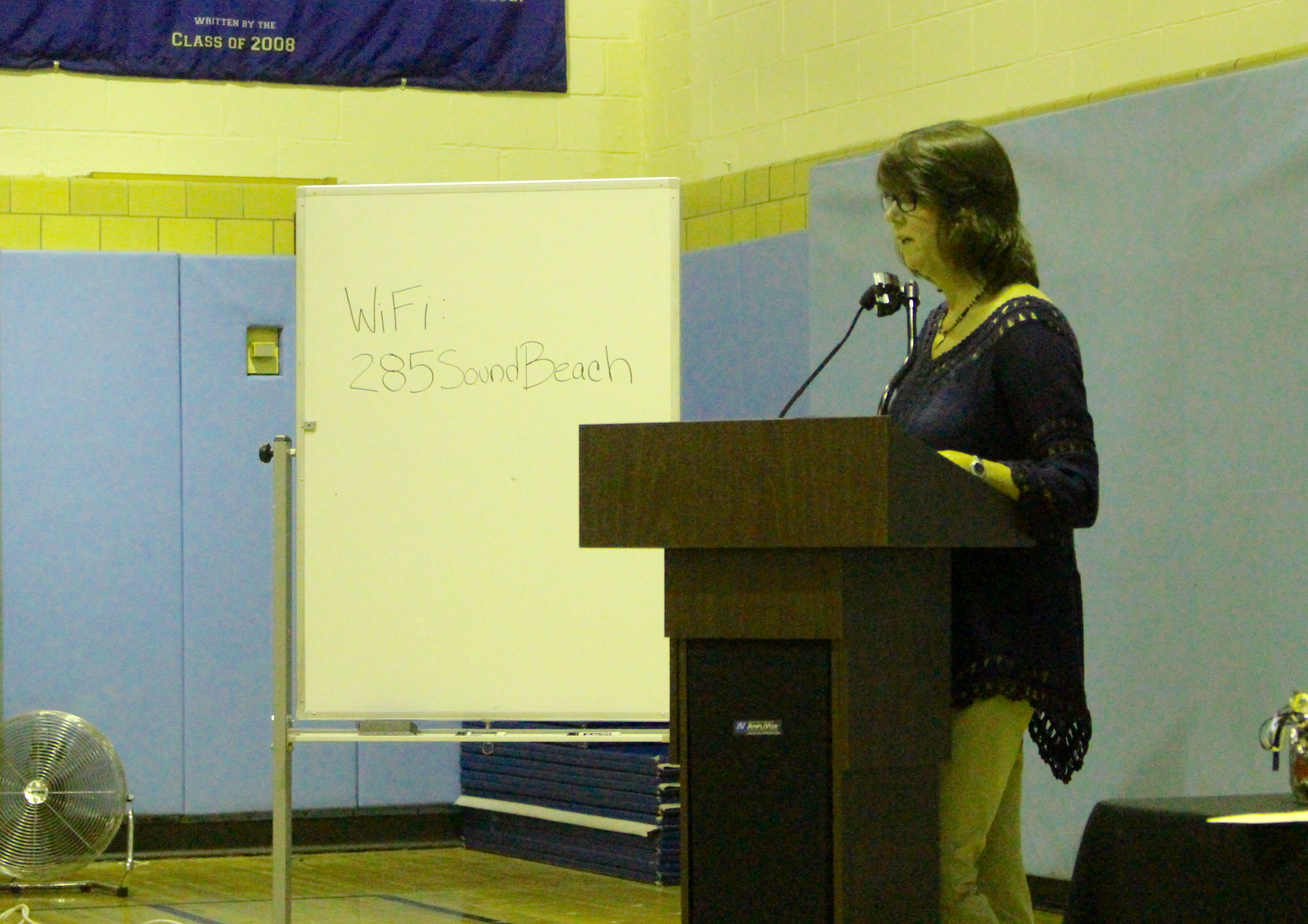 Debra Smith, an English teacher at Greenwich High School who has a sophomore at GHS as well, recalled all the times she spoke at hearings in favor of changing the start time and her conviction that sleep deprivation was a detriment to student learning and health.

“It was all theoretical,” she said. “I had yet to experience it firsthand. Now I see a difference in the classroom,” Smith said. “I see students who are more energized and awake.”

“While I recognize there are traffic frustrations during this period of transition, and I hear from parents of athletes, I feel confident we made the right decision,” Smith said.

Rich Comizio said the school start time change should have been implemented at the same time as an upgrade to lighting at school fields.

Comizio said the spirit of competition is an important part of a high school education, and that competition benefits athletes as well as spectators. he argued that Greenwich has a disadvantage versus schools in other districts that have better facilities.

“It’s vital for us to find a way to light up the whole high school,” Comizio said. “I can’t imagine how this town became handcuffed by this individual.”

Comizio referred to Bill Effros, a GHS neighbor on Old Church Road who sued the town. As a result, Cardinal Stadium operates under a set of lighting restrictions that stem back to the lawsuit that was settled back in 2003 in Stamford Superior Court.

Valerie Erde said her son, a GHS senior, had wanted to speak at the hearing but had decided since he finished his homework early, he would work on his college applications.

“He said, ‘I’ve been in a diversity of classes and you can tell people are less groggy and more focused at the start of the day, and they feel like talking.’ ..They’re rubbing their eyes less, slouching less and they’re talking more. You can see in class that they’re more focused.” 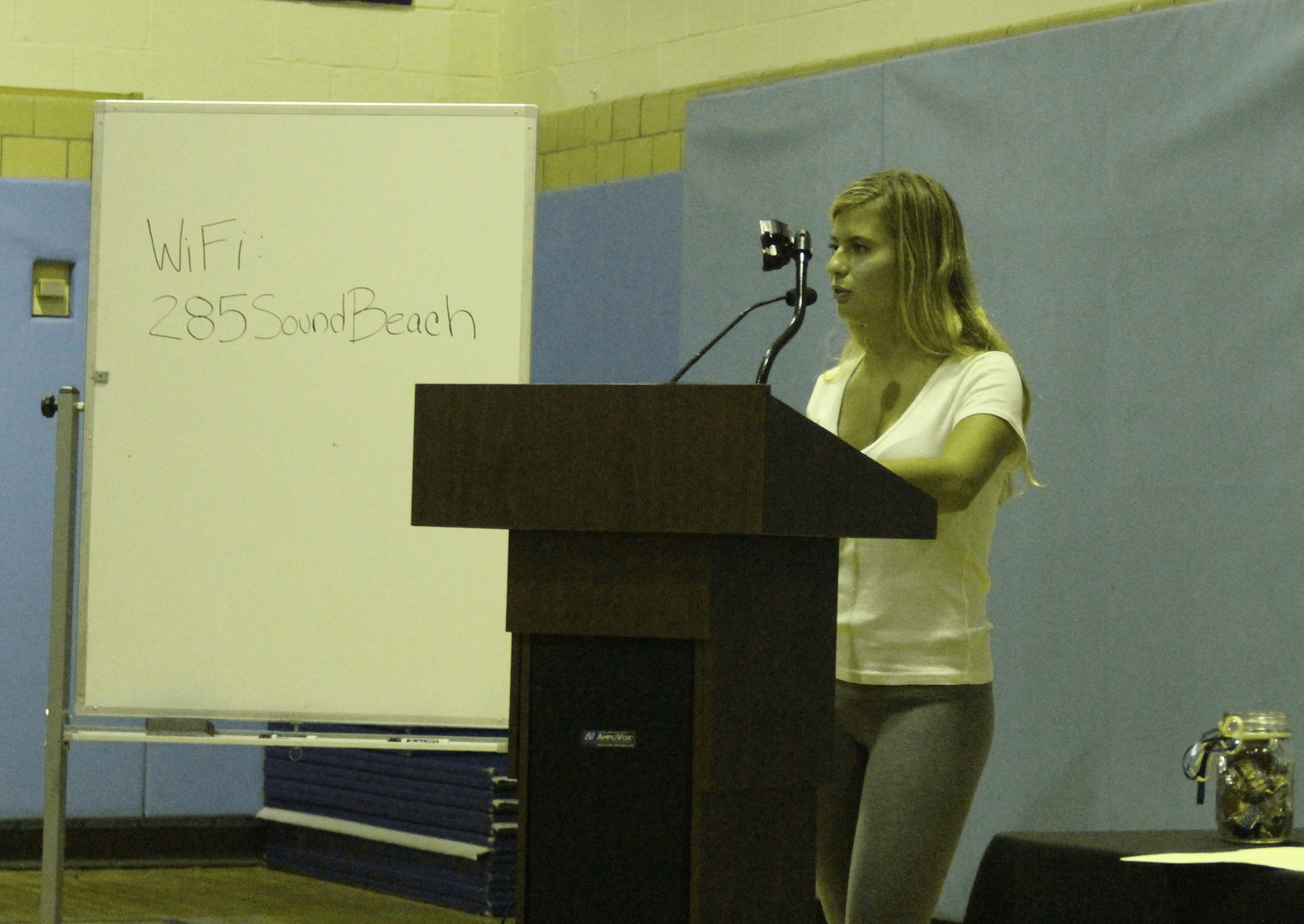 Isabella Ross, a student at GHS, said that last year she would arrive at school groggy and anti-social.  “Sometimes this tired feeling could last all day and I’d come home too exhausted to focus on my homework,” she said.

On the days she had first block open and got an extra hour of sleep, she said she could pay attention more easily and had a better attitude toward her peers. “On those mornings, I was generally happier and wanted to talk to people. And I was more productive.”

GEA president Carol Sutton worst case scenarios have not materialized. “Predictably the strongest supporters are emphasizing the positives. The naysayers are saying naye.”

“The mission was never just about sleep. The mission is to improve the health and well being of our students.” – Carol Sutton, GEA president

Sutton said there has not been a mass exodus of teachers, and that traffic issues are being addressed quickly.  She said it is now time to look at why students are lonely, depressed, anxious and overwhelmed with school and life. 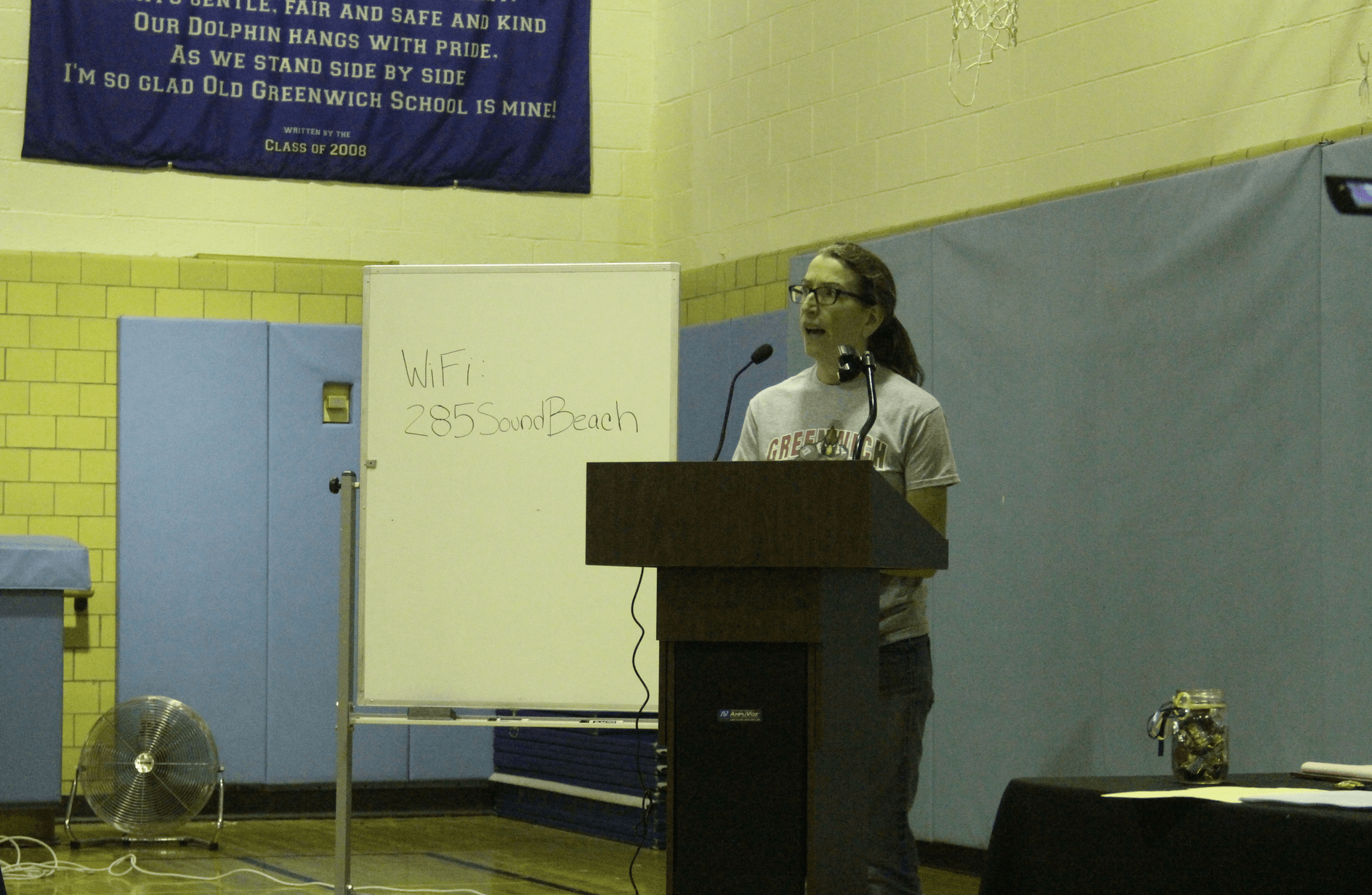 Dawn Stevens, a parent of several student athletes said she was concerned about impacts on practice times and games. Sept 14, 2017 Photo: Leslie Yager

A parent, Dawn Stevens said student-athletes’ time in the classroom is being jeopardized. She said that whereas that last year none of the football teams missed a last period class to get to a game, that may change out of necessity.

“Last week, the junior varsity team did not leave early because they did not want to pull them out of class,” she said. “They had a 90 minute bus ride to Trumbull and got there just 5 minutes before their game started.”

“I think that’s not a great way to start a season and it’s not great for the kids,” she said. “They may rethink that and pull them out of that last period class, that 7th block.”

Sam Stewart said school start time was personal to him because he had two seizures that were diagnosed as sleep related. “I know some students want to do sports at this school. That is great, but that is their choice. I don’t think the majority should have a tough time through the whole school day to make their day easier.” 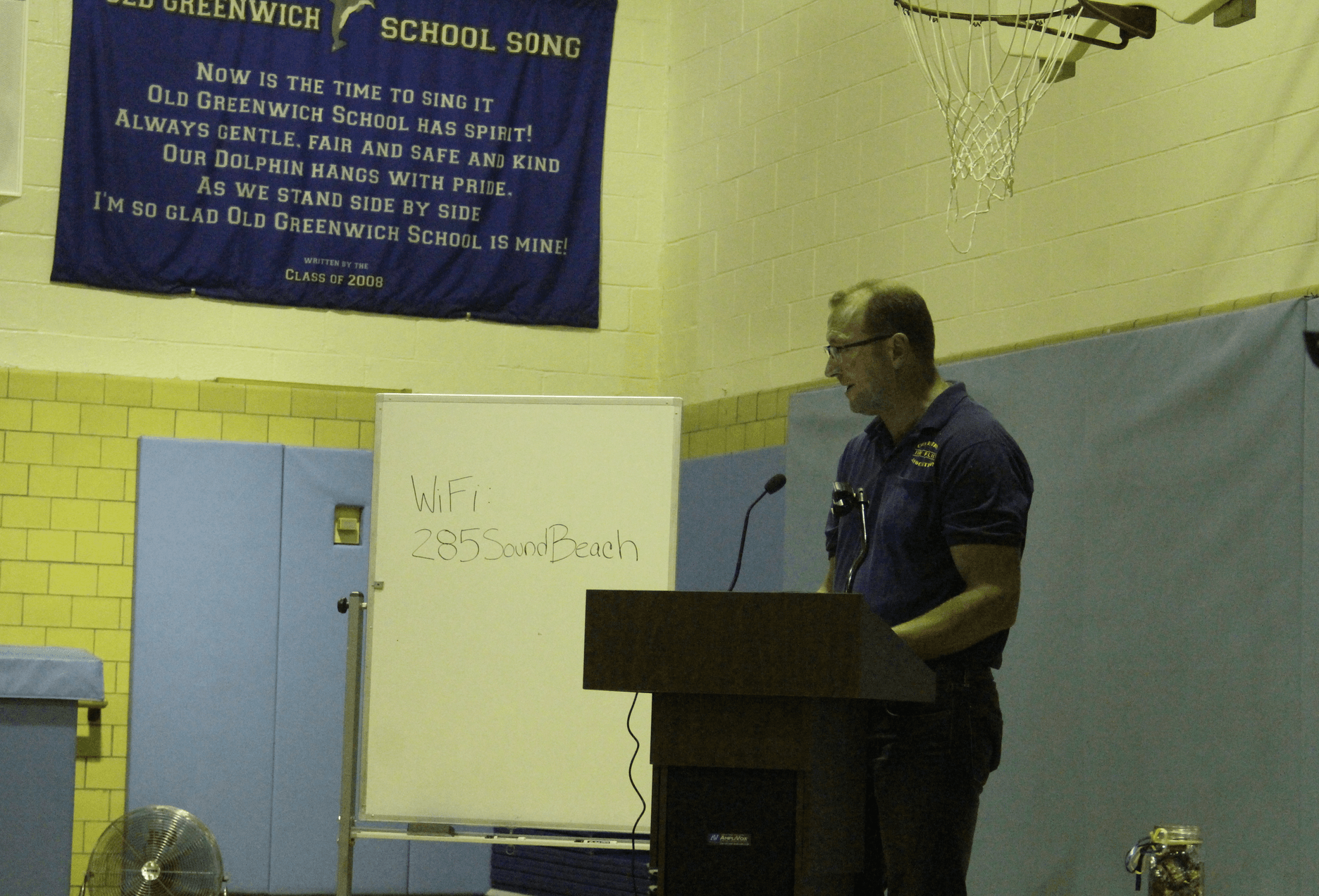 Ken Pond addressed the Board of Education on Sept 14, 2017 Photo: Leslie Yager

Ken Pond, a parent, said the late school buses shouldn’t be a surprise, but, he said, “Our bus from Parkway School has been consistently 20-40 minutes late.

“We are the first stop. The ‘excuse letter’ we got doesn’t make much sense to those of us in that area because the buses don’t cross over toward Stanwich Road or Dingletown Rd, or encounter any of the traffic from construction in town. We’d like to know why,” Pond said. “We’d like to know why kids are getting off a bus they’ve been sitting on for 40 minutes like a sauna in this unusually hot weather.”

Mr. Pond said that last year he received two refunds for late buses at Parkway School. Noting that there have only been eight full days of school this year, he said he was already prepared to ask for refunds.

“Iron out the wrinkles and get it fixed,” Pond said emphatically. 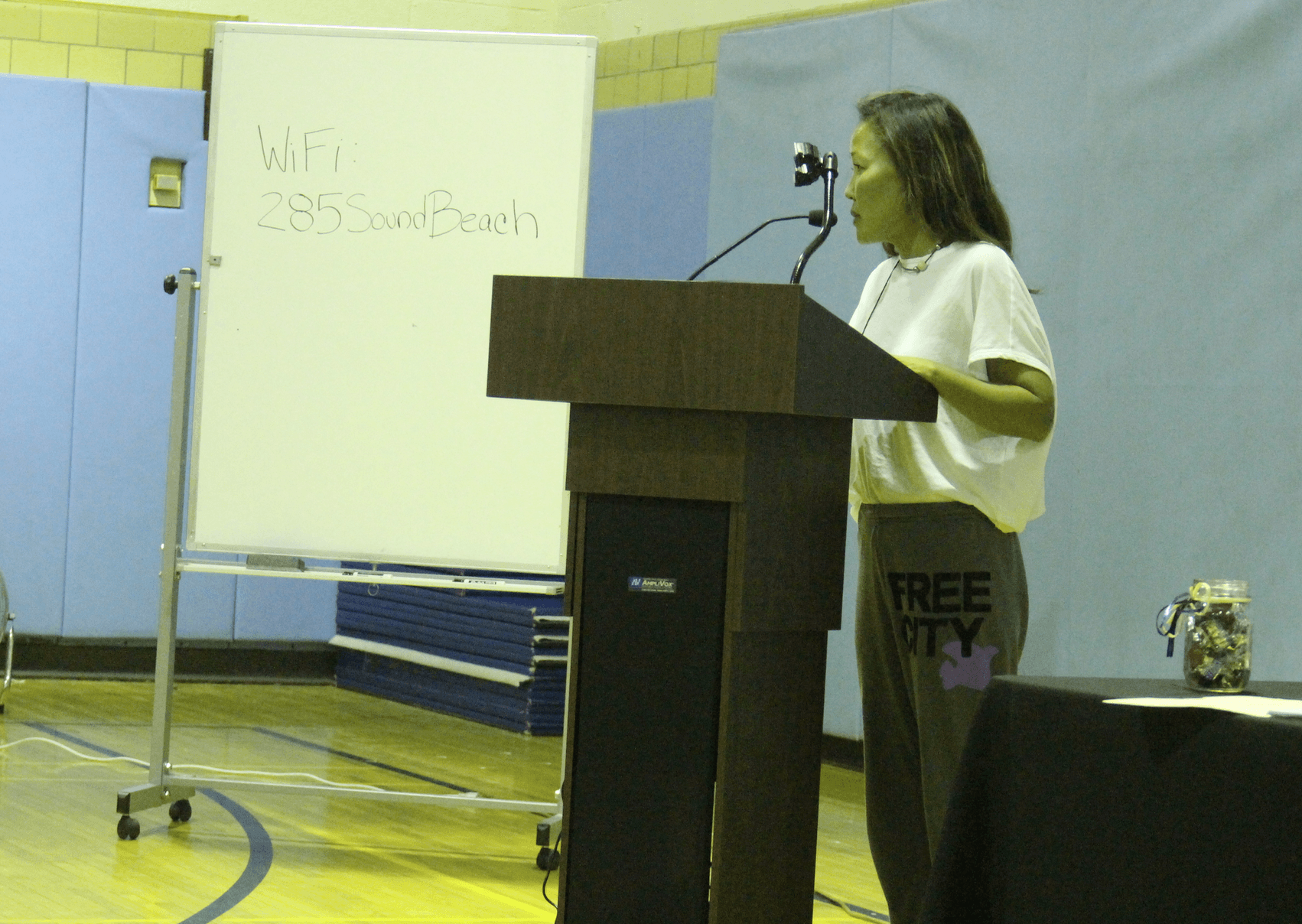 Sharon Sunoo, who spoke vehemently against changing start time during previous hearings, asked whether it was true the district was planning to disband the start time subcommittee within two weeks. “I would hope that the subcommittee does not disband,” she said. “There are a lot of good ideas out there to make this work. When you leave a mess for the administration to deal with, you’re being disingenuous.” Also, she said, “I’m not sure how you are evaluating, above board, what is happening in our district.”

Greenwich Schools superintendent Dr. Jill Gildea said the subcommittee, chaired by BOE member Dr. Gaetane Francis, had met earlier in the day, and that they have 8 meetings planned for this year.”We will not be abandoning the committee,” she said.

“There will both be the ad hoc work as well as our parallel administrative work,” Gildea said. “But we believe we can move it over to administrative.”

Dr. Gildea said the transportation system had been overhauled as part of implementing the new start time and that bus routes, stops, numbers of buses, and new bus drivers were all factors in the project. She said ongoing construction had delayed travel time, but that school bus ridership had increased overall.

Gildea said that the first week of school, there were 200 calls a day about transportation issues, with about half being in reference to a late buses. She that the number of calls had reduced to 35 this week.

The superintendent said the Dept of Public Works repaired the Hillside Road driveway so that buses will no longer bottom out as they exit the campus.

“We’re grateful for the communications from parents and also their patience. While we see daily improvements overall, it will likely take at least 60 days for us to fully review and assess and implement all recommendations  for smoothing the transportation system.”

Gildea said it is likely the solution will involve additional buses.

She also thanked Elmer from STA and Vicki Gregg the new transportation director who took over from longtime director Janice Domiziano for their good work.

The superintendent said that this year students, staff and community stakeholders will be surveyed to assess the impact of the start time change on academics, athletics, extra curricular, faculty, transportation, food service, family engagement, and student & stakeholder impact. “Ideally we are targeting school buses to arrive about 15 minutes before the school start time.”

Superintendent’s School Start Time Recs: I Will Not Be Here. Someone Else Will Have to Do It… I Have Hope