The Board of Education held a special meeting in the Central Middle School gymnasium on Tuesday night to hear public comments about whether or not to enter litigation to reopen the 2003 court judgement with a neighbor of Greenwich High School that limits use of lighting on Cardinal field (field 1) to 10 games plus 6 practices a year, and precludes just about any alterations, such as the additional lights on other fields, addition of bathrooms, changing rooms or upgrades to bleachers.

At the end of the two hour special meeting, the board, including Lauren Rabin on speaker phone, voted 6 to 2 to have the town file a motion to reopen the 2003 court order.

The board decided to let everyone who signed up to speak have 3 minutes apiece, and of about 15 speakers, most pushed for litigation. One speaker of particular note, Toni Natale, said she was involved when the town reached the 2003 settlement.

“I started the crusade in 1996 to put in lights in Cardinal stadium. We finally got them up in 2003 and we did a lot of compromising – the height, the number of times they can be put on, the number of games, and for how long,” she said, before offering her advice.

Many parents spoke about Greenwich’s athletic facilities in less than glowing terms, and even the superintendent echoed that sentiment, saying poor facilities are not a GHS problem, but rather a town problem.

Peter Carino described the town’s facilities as a blemish.”They’re sub par,” he said. “To other people it’s almost laughable.” 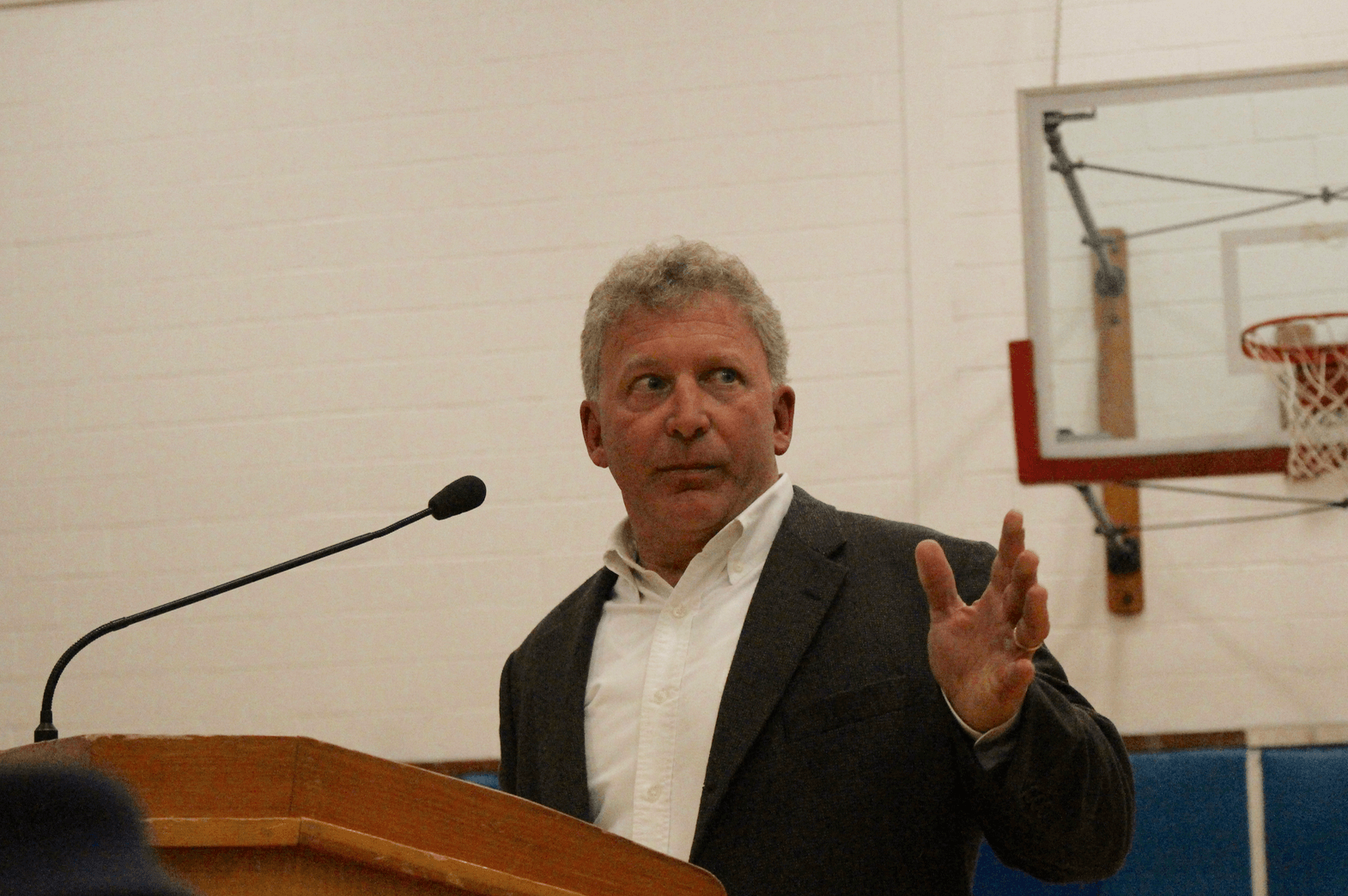 Rick Kral, who said a decision to go straight to the legal route was premature, added that he was also part of the original group to work on getting lights and turf at GHS.

“We have neighbors in the areas of GHS who have concerns and haven’t been able to speak in proper forums,” he said, noting that the first forum of that nature was the previous night. “We need to respect them.” 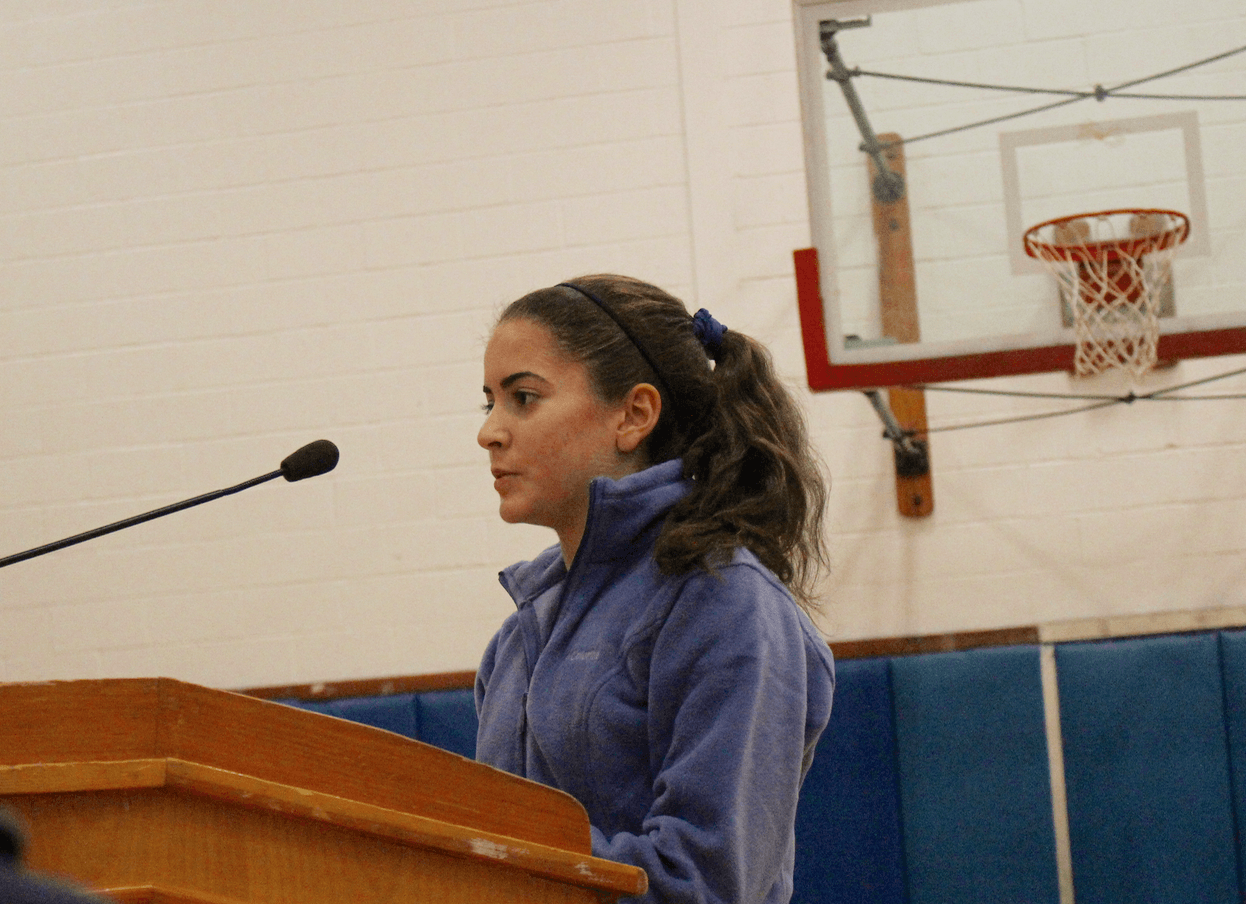 Emily Philippides, a GHS student who is captain of the indoor track team said the school start time change and ensuing decrease of light for practice impacts more than teams who use Cardinal field. “People often neglect indoor track. People think we practice indoors, but we practice outdoors,” she said. “With the start time change we can’t go on the roads any more because it’s unsafe. We’re forced to stay on the track,” she said, adding that 200 athletes do indoor track and they practice through December and January.

Marianne Iuteri Charles said a group was being formed called Parents for the Greenwich Student Athlete (PGSA), a group that is drawing GHS football parents and GYFL parents, as well as parents from a variety of sports. The group’s goals are both long and short term, including finding alternative fields for players immediately.

“Our mission is to ensure there is an even playing field,” Iuteri Charles said. “Our board has failed to provide that. Our varsity football team had to sit on a bus to go to practice in New Canaan today.”

Ms. Iuteri Charles, an attorney herself, said litigation should have begun when the approval began for changing the start time.

“We demand solutions and that the board commence litigation. Let the lawyers do their job without interference from the board. Let the superintendent who inherited this problem do her job.” 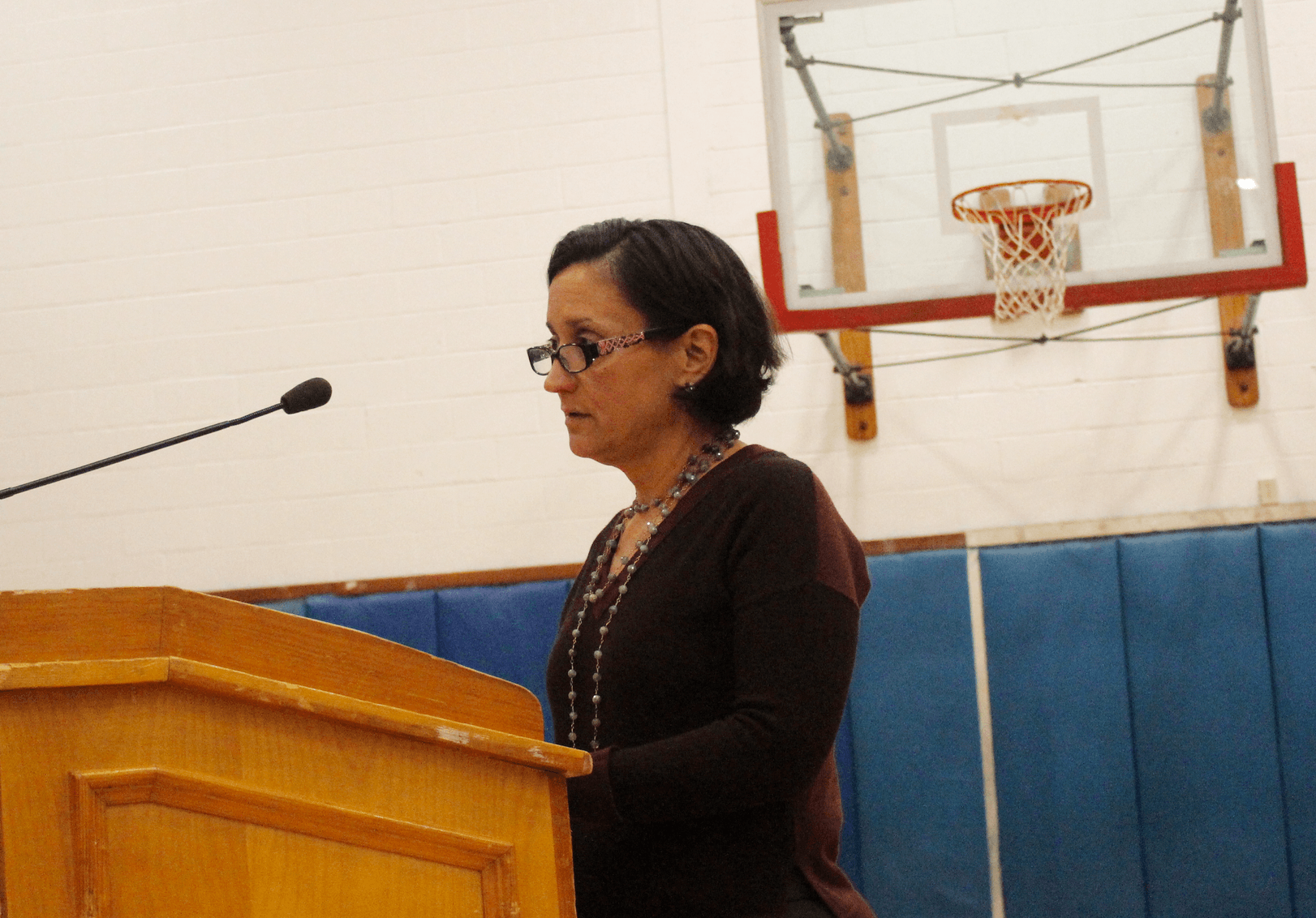 Victor Ceci also spoke in favor of litigation. “We have not kept up with changes in other town,” he said, adding, “We should no longer worry about whose feathers get ruffled. We need to take a stand for our children so they have the amenities other towns have.”

Robert Sisca introduced himself as a real estate attorney who works throughout the county. “When I talk to a prospective purchaser about where they’re moving and why, they say they’re leaving because of the poor state of sports facilities in Greenwich. It’s really a shame.” 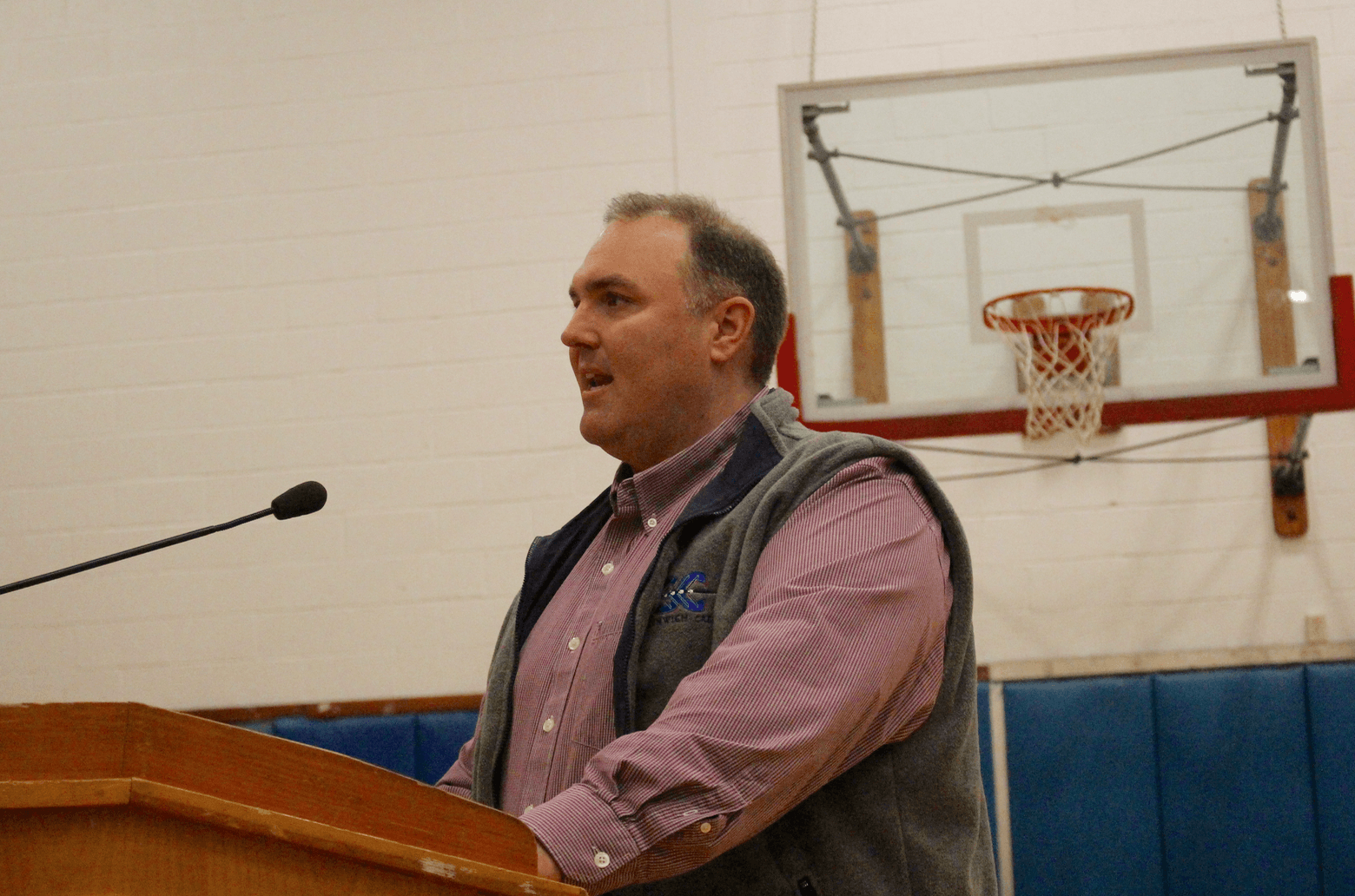 Marc Ducret said he was in favor of the later start time. But, he said, “It is incompatible with fall sports. It’s just not fair to our kids. Our fields are a disgrace.”

Mr. Ducret described a time when a visiting soccer team came to play in Greenwich. “They thought it would be fantastic. They canceled because the coach said it was unsafe to play on the fields in town. We don’t want to go to court, but we need to push this through. If we’re going to have these later start times, we need to have lights.” 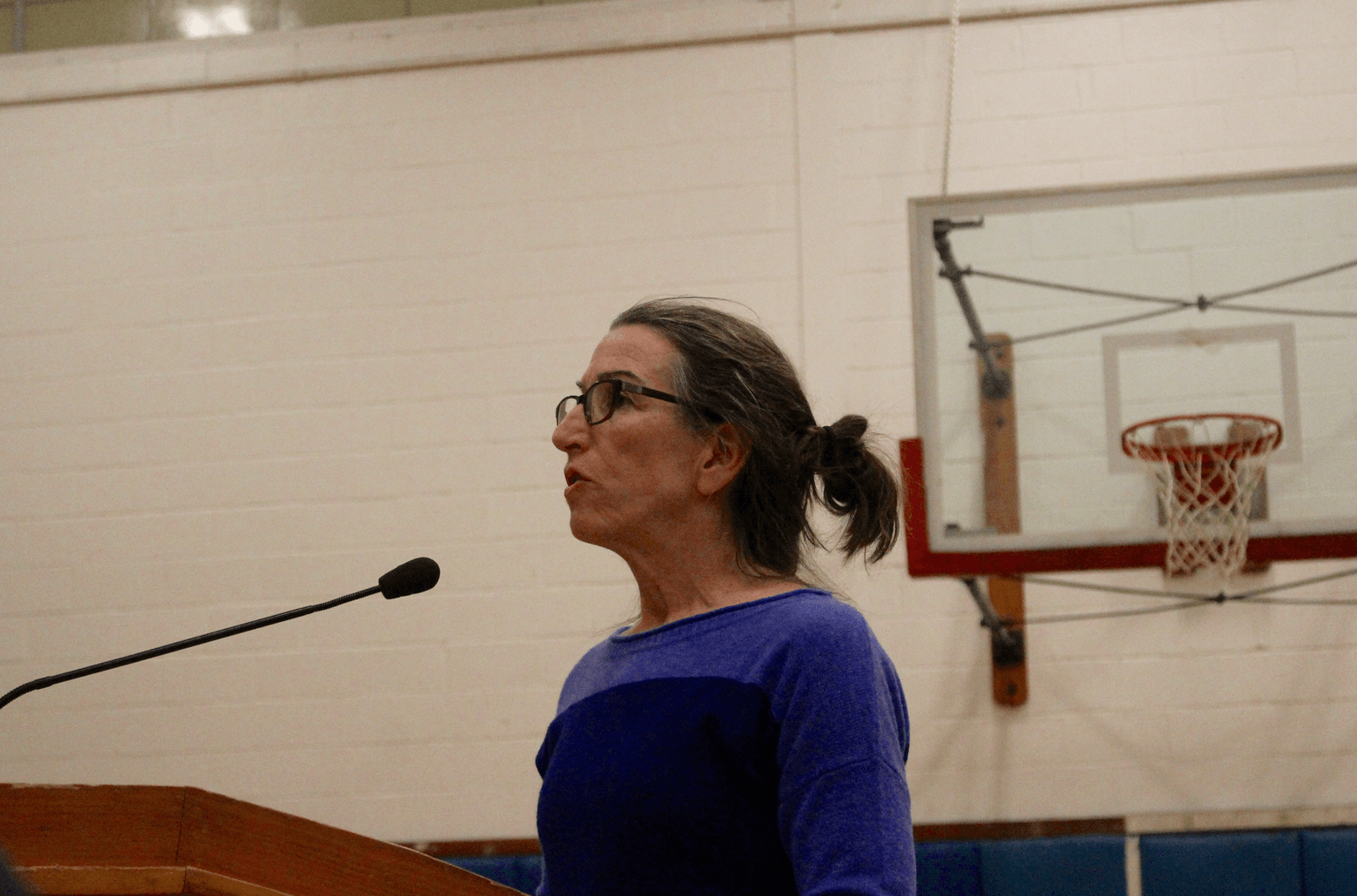 Dawn Stevens who has two children at GHS who each play three sports, and a graduate of GHS who played three sports for all four years, said athletic facilities haven’t kept up with the times. She noted AP courses have been added, AVID and Innovation Lab have been created, and MISA has been built.

“We changed how we teach children. …Our athletes are left behind. Our facilities – everything about it is 1999,” Stevens said.

During discussion among the board members, Dr. Gaetane Francis was the first to speak in favor of litigation.

“Going to court is not to avoid the Municipal Improvement process, P&Z, and discussions with neighbors. All that has to happen,” Dr. Francis said, adding, “It’s clear that even minor changes cannot happen with the current agreement. We need to go back to court for any change, that’s why I support it.”

Jennifer Dayton said she wanted to take care of the GHS neighbors, but, she said, “The only way to have a conversation is to go to the court.”

“Some matters with regard to children’s safety can only be resolved by going to the court system. If we don’t open the stipulation, we can’t get any forward movement,” Dayton said. “We can’t we even put up a bubble to shield the neighbors and have continuous lights for practice.  …We are required to explore it through the court.”

Mr. Bernstein, an attorney, said that any changes would have to start with court.

“If we’re granted relief, only then can we start the town process that involves the Selectmen, RTM, and others,” Bernstein said. “Last night was only the first of many opportunities for open discussion and constructive dialogue. The motion tonight is just the start of the process.”

Laura Erickson and Barbara O’Neill both disagreed. “It is an embarrassment when visiting teams come and see the types of facilities we have,” Ms. Erickson acknowledged. “The fact we don’t have bathrooms, lights or handicapped facilities is inexcusable.”

But, Mrs. Erickson said, Monday night’s meeting with neighbors was just the first. “There were people starting to realize this new technology is pretty good. ‘Oh, if you light 1 or 2 fields, could they might not be adjacent.’ There was starting to be an understanding of the issues we’re facing. …The first thing a judge will say is, ‘What conversations have you had with the neighbors?'”

“It’s premature to decide tonight,” Erickson said. “We need to be more respectful of neighbors. I’m not in favor of the  motion tonight.” 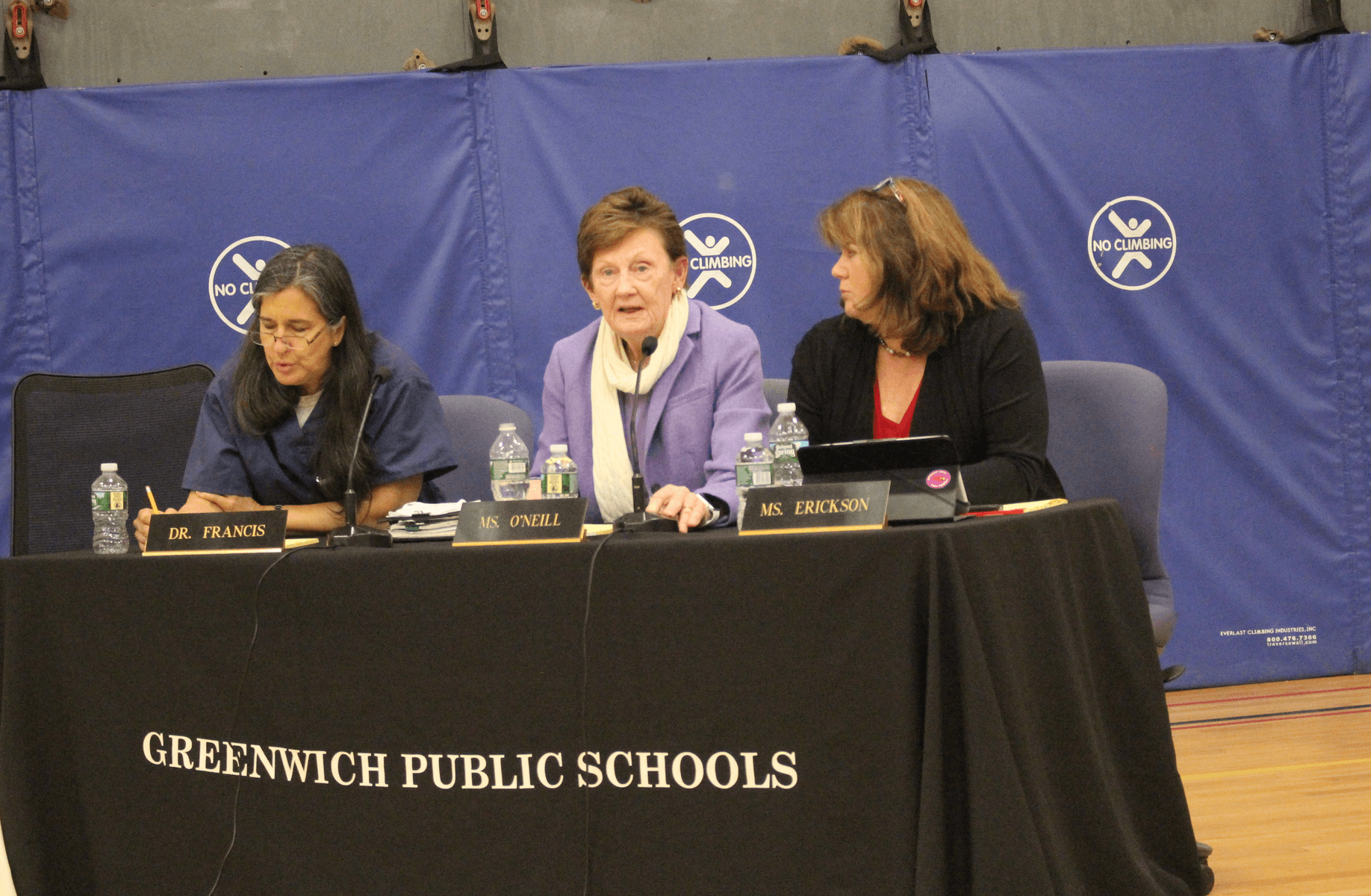 Mrs. O’Neill said she had headed to Monday night’s meeting with neighbors thinking litigation was the answer, but left feeling otherwise.

“I’m not sure we know what we want to ask for. …If we don’t have a relationship with the neighbors, then we’ve lost an ally. This also has ramifications with those who are neighbors of other fields in town.”

Mrs. Appelbaum asked the superintendent several questions, as she was torn between being respectful and patient with neighbors, and realizing the situation needs to be addressed quickly.

BOE chair Peter Sherr said, “The lights now are offensive, I wouldn’t want to live near them.” Sherr said state-of-the-art technology that would improve GHS’s position as a neighbor. “It’s understandable that the neighbors are skeptical. We’ve heard from neighbors what a horrendous experience this was the first time.”

Mr. Bernstein said that with litigation, “We meet with the judge …they may ask you to go to mediation. All these are possibilities, but until you file with the court, that process doesn’t start.”

“This is a town issue, start time might have made this more fixable, but it would have to have happened anyway.” – Dr. Jill Gildea

Mrs. O’Neill said that at a meeting with the BET, her interpretation of the feedback was for the BOE to return with a firmer grasp of priorities. “Didn’t they say we need a bigger look at the whole situation? And think about another paces where the stadium might be? They didn’t support the ‘ask’ for the funds. I got the message we didn’t quite have our priorities in right order.” 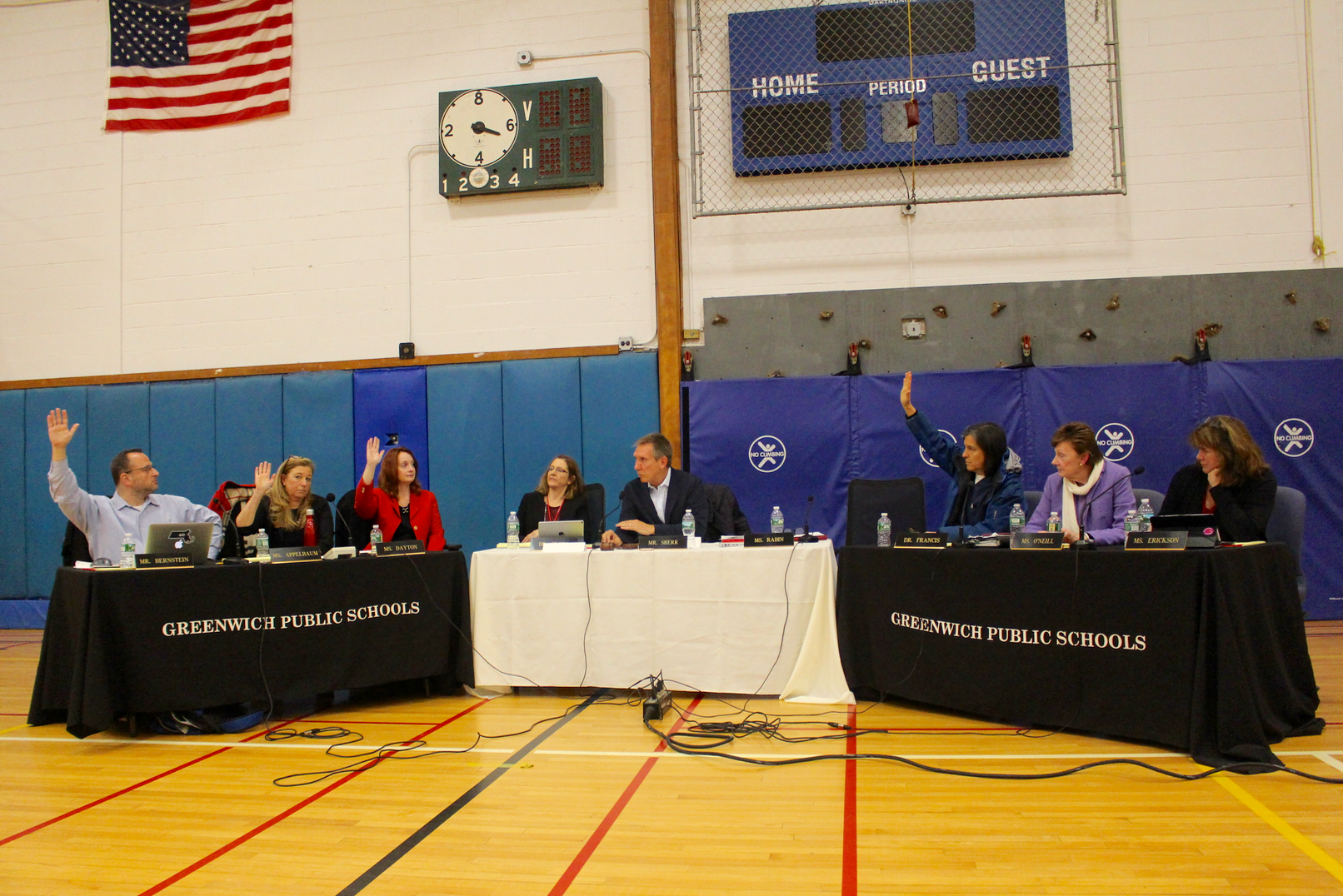 Dr. Gildea addressed the GHS neighbors – and many of the faces from Monday  were visible in the audience, she said, “We’ll have planned meetings, and you’ll get more than 3 days notice. We’ll have ongoing dialogue. This will be referred to Board of Selectmen agenda on Nov 30th. They may take it up. They may not. Then it goes back to town attorney to continue. That doesn’t impede talking to neighborhoods and fine tuning the ‘ask’ we have that includes height of the light poles, etc.”

Dr. Francis, who is the board’s member of the school start time committee, is spearheading the ongoing dialogue with GHS neighbors. She said she is working on setting up a second date for a meeting.

Ms. O’Neill, who said she preferred to have a dialogue with neighbors before launching into litigation, asked, “What are we trying to accomplish with the next meeting? Will be all lawyered up? Will they say, ‘We’re not going to say anything because we’re lawyered up?'”

“What I heard last night that a motion to sue after the first meeting would be viewed as a hostile and aggressive act,” Mrs. Erickson said. 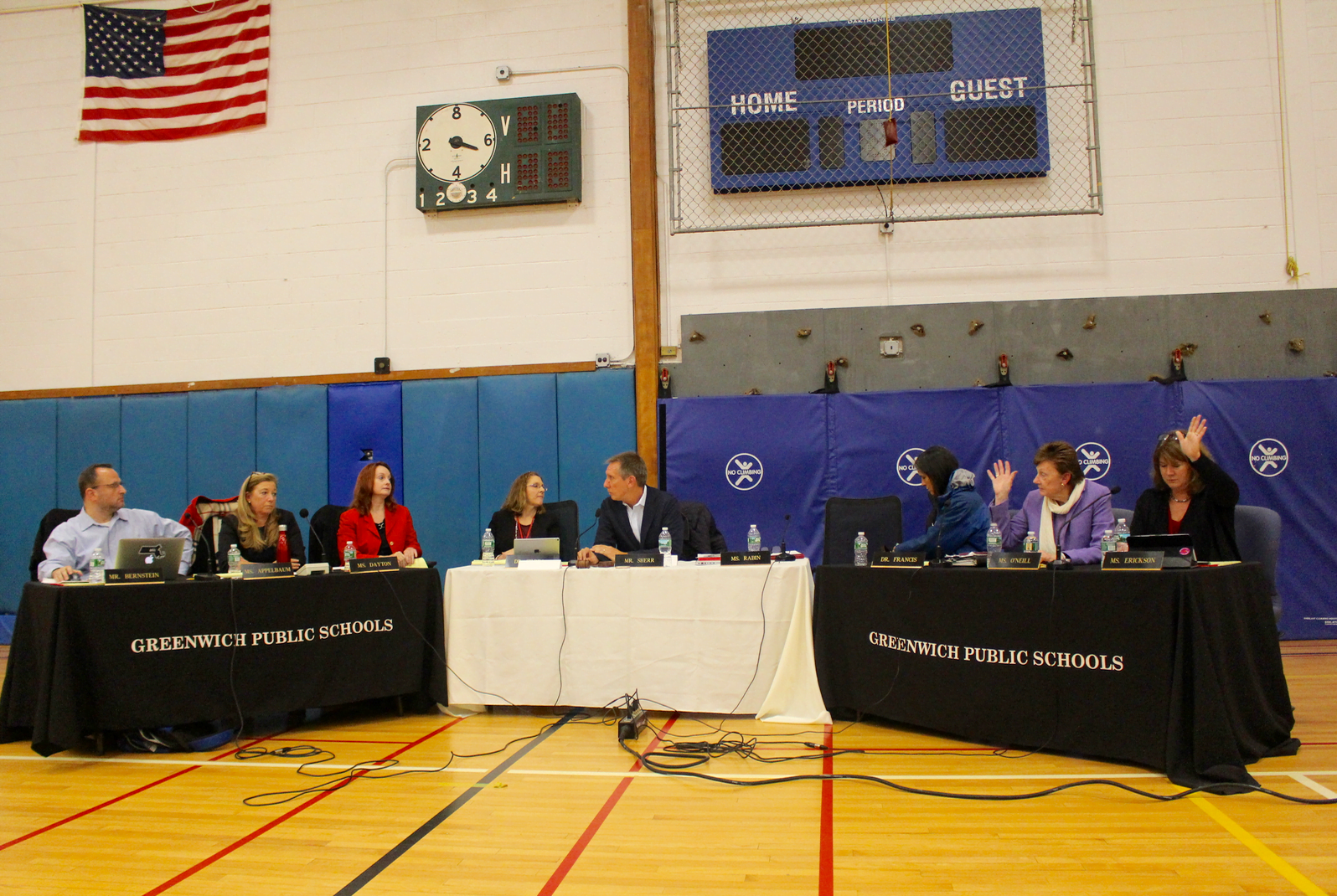 Mr. Sherr argued that upgrading lighting in a “reasonable and friendly way” at GHS would work toward solving the problem. “Also, creating world class sports facilities at the middle schools, bubbling at GHS, building new facilities at Eastern Greenwich Civic Center, Havemeyer (which features the original GHS field and track), or other Parks & Recreation facilities.”

Mr. Sherr said there was confusion over exactly what agreements the town has entered with regard to GHS neighbor Bill Effros.

“We have Effros telling us there are five agreements. Neighbors are talking about ‘iron clad agreements,’ some going back to the 1960s. I don’t know how to figure out which way is up,” he said.

“Eventually we have to resolve all of the claims and get to the bottom of what we can and can’t do at the GHS property. If the neighbors are right because our predecessors made five agreements, so be it. Then the parents need to know that.”

“The ‘ask’ is reasonable in my book. We’re not trying to turn it into Yankee stadium.” – BOE chair Peter Sherr

“Neighbors need to know if they’re talking to us, that we’re authorized to talk. It doesn’t mean hauling off and suing everyone tomorrow,” Sherr said. “We need a plan B for student athletes by September 1, 2018. It’s time to take some action.”

The motion the board voted on was to authorize the town attorney to initiate litigation to modify the 2003 judgment to consider lighting on GHS property, and resolve that no litigation can be initiated until the Board of Selectmen also authorize the same on behalf of the town.

The vote was 6 in favor (Bernstein, Appelbaum, Dayton, Sherr, Rabin and Francis) and 2 opposed (O’Neill and Erickson).

The motion passed and the meeting was adjourned.