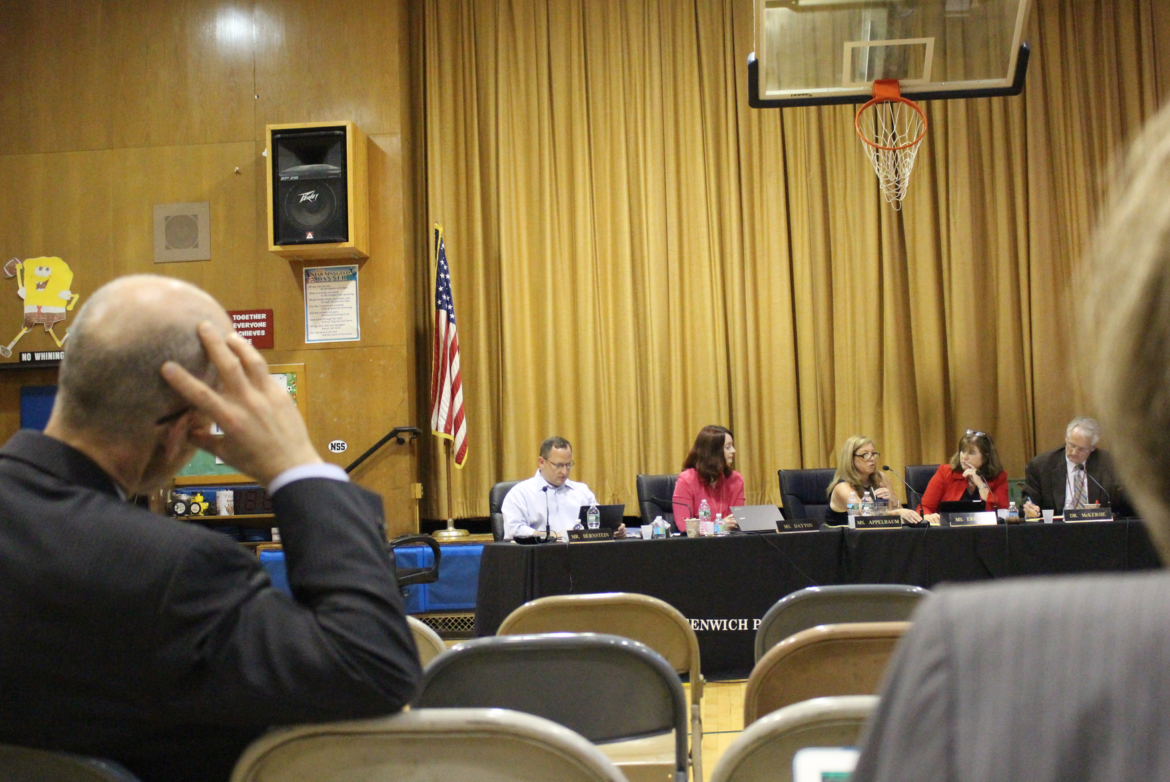 Greenwich Schools Superintendent Dr. William McKersie issued his recommendations on changing school start times to the Board last week. There was no drama surrounding the recommendation on Thursday night. His recommendations were essentially a winnowing down from eight bell time options to just three, having incorporated feedback from a recent survey of Greenwich Public School families.

McKersie said that feedback from parents parents was to please to keep elementary and middle schools start times as close as possible. He said they were also looking for a standard elementary school start time, which all three options feature. (Currently the 3 Title 1 Schools start a half hour earlier than the others).

McKersie said that after the Board of Education takes a vote that School Bus Consultants (SBC)  would build the “blueprint for change,” but that until a single option is selected, there was no point to further refine the options.

Knowing that any one of the three options would need to be further “refined and optimized”, Board of Education members ventured their opinions and concerns.

Peter Bernstein said his concern was for elementary school parents stuck needing a place for their children to go in the morning when they needed to be at work.

“I think we need to address that concern of parents who are working,” Dr. Francis said. But she said just as there are many after school programs, similar activities could be created in the before school morning hours.

Peter Sherr said he was disappointed that after a full year that the study committee had tackled the issue, so many questions remained unanswered. But he said, “If it was that big an issue they didn’t think they could solve, I think we would have heard from them by now.”

“I can’t remember a single issue at this kind of price tag that had this kind of opportunity to impact thousands of kids, on something we’ve declared as a board is critical: The social emotional health of children we just last June declared that as a major strategic goal of the board,” Mr. Sherr said.

“Now, something shows up with the possibility to impact thousands of kids…. We’re talking about 2,500+ kids at the high school,” he continued. “A million dollars in a $150 million operating budget – that’s less than one percent.”

“There are 1,900 middle school kids that are basically left out in the cold,” warned Mr. Bernstein. “If we’re talking about thousands of kids, let’s talk about the entire population.”

“We have to set aside previous misconceptions,” McKersie replied to Mr. Bernstein. “I’m looking at several people who aren’t administrators, who are incredibly important to this process,” he said, nodding to Greenwich parents, including Amy Badini and Valerie Erde.

“We have to let go of the idea that this is only coming from the administration,” McKersie said, adding, “We’ve heard from a lot of people.”

“This district will only move forward if the Board of Education, administration and parents come together,” he said. But, he pointed out, “I’m not going to be here – somebody else will have to do this.”

Dr. McKersie has not sought to renew his contract with Greenwich Schools, and will head to Weston Public Schools to be their superintendent.

“This is a very bold recommendation, brewing for a long while, with a lot of input…There has been good, healthy debate. There are several logistical issues that I am confident we can get around,” McKersie said. “The middle schools have not been left behind.”

McKersie said that there are opportunities to work with local independent schools. “We’re all working toward a sweet spot that’s a challenge. There has been reporting that they’re unwilling to cooperate. That is false,” he said.

“On June 14, as a board you have to decide: Are we going to move forward or not? Are you committed to this? Are you willing to move ahead?” McKersie said.

“I have hope,” McKersie said. He said Greenwich Schools had undertaken another bold, expensive move: digital learning. “It’s been a bigger money amount a yet – we have done this before, Greenwich. We found a way with town budget leaders to make it work.”

Dr. Francis had the last word. “We have a moral obligation to do what’s right for the health and well being of our high school students – And, yes I hope we can get that for most students as well, but this is something that we must commit to.

The issue of our strategic plan – I do not know how we can ask for a stated goal for our students ‘to care for themself and others’ if we cannot do that for them. I cannot speak more strongly of my feelings. This is something that we must do, because otherwise, we are turning away from the health and well being of our students.” – Board of Education member Dr. Gaetane Francis.

A second set of Community Engagement Sessions will provide the public another chance to discuss the recommendation and the plans for implementing changes to bell times, if applicable.

• May 23 at Central Middle School