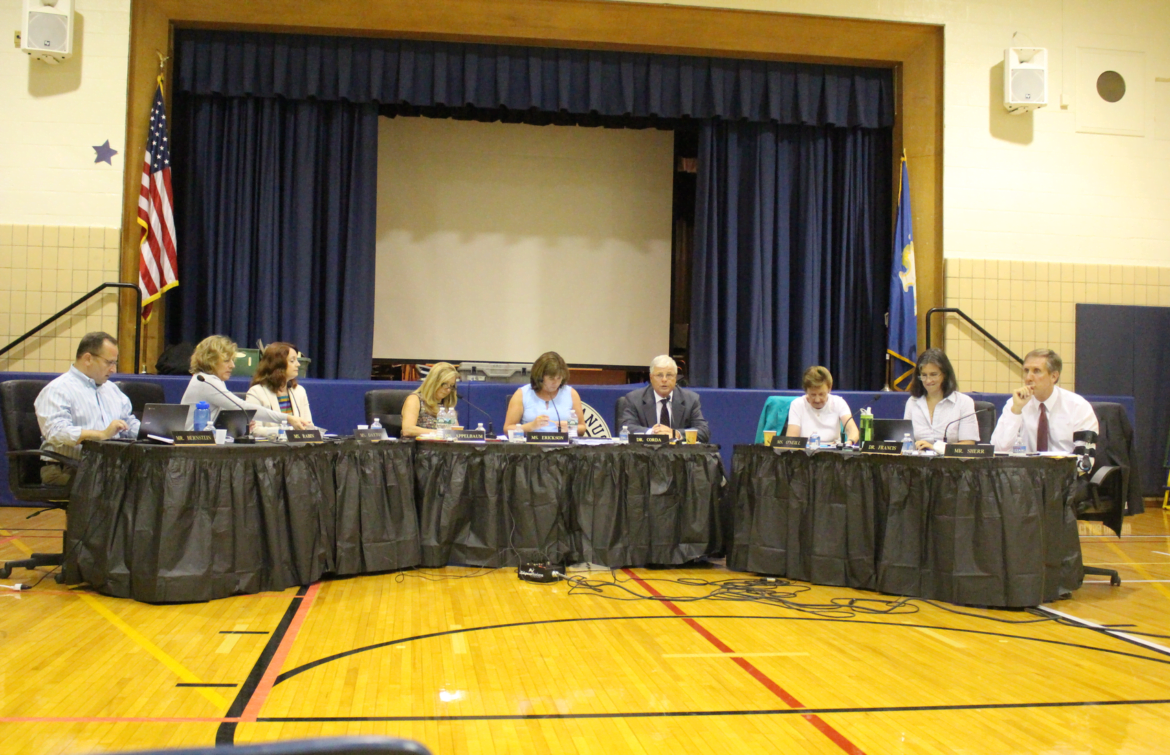 Thursday night’s Board of Education meeting started off with a glance at the clock at about 8:00pm when it was announced that 46 people had signed up for the public hearing, and that each had a 3 minutes to speak.

Though some of them declined to speak as the hour grew later, many took their turns at the microphone, including several teenagers who were allowed to go first.

After everyone had their say, Dr. Gaetane Francis who had run for her seat on the Board last fall on a platform that included changing school start time made the motion to start school later, beginning next fall.

Among the supporters of school start time change, many dressed in white, were some compelling remarks from students, including Emma Schuren, a Greenwich High School sophomore who said, “I find it pretty ironic that you teach children to have a healthy lifestyle – eating a healthy breakfast, drinking lots of water during the day and getting a good night’s sleep. We’re teaching these lessons, but we’re not able to act on them. ”

“Obviously teachers do have their own life out of school, but if you were applying to any other job that was 9 to 5 and said you have another commitment at 4 o’clock. Guess what? You don’t get the job,” Emma said.

“Overall this is an academic issue. Extra-curriculars are obviously fun and enable you to do stuff you’re interested in. Unless you’re relying on a sports scholarship, sports aren’t going to make or break your future. They’re called ‘extra’ for a reason.” 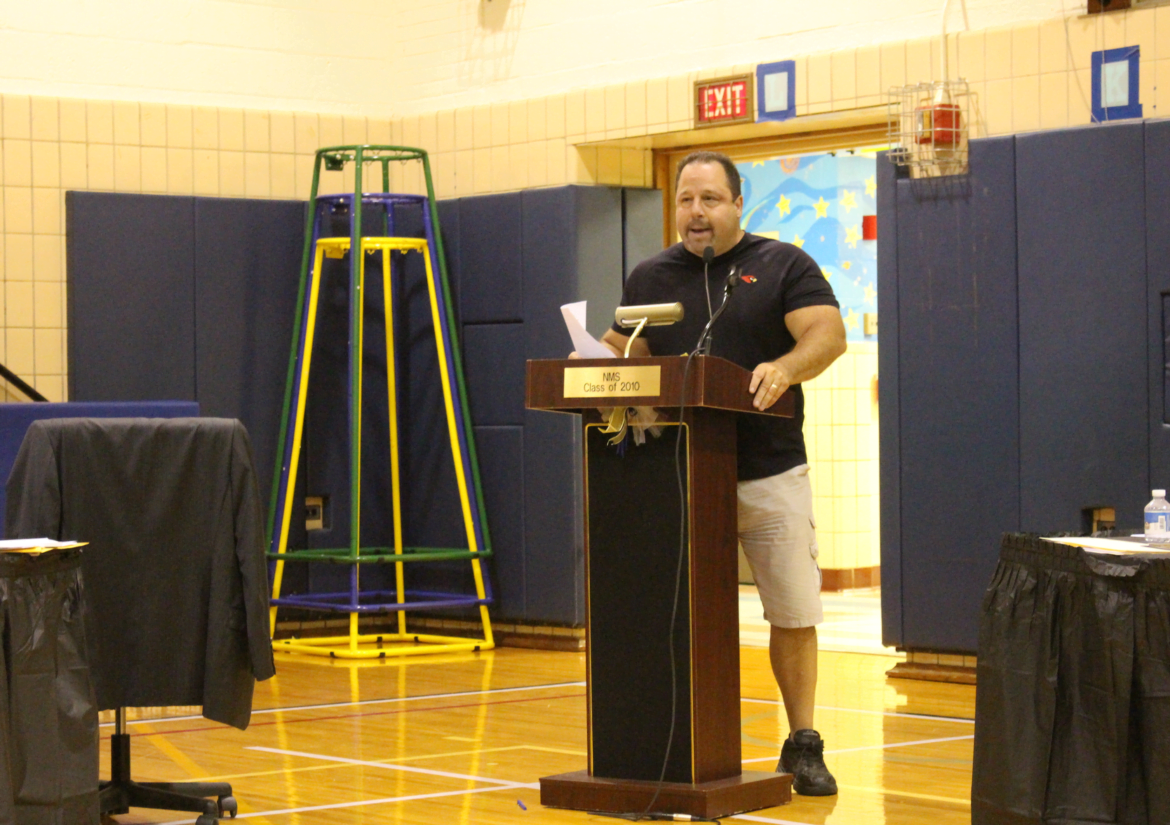 Tom Waurishuk, a football coach who arrived late to the meeting because he had been coaching a football practice offered to read aloud State Rep Fred Camillo’s statement in his absence, but instead spoke against a change in start time.

Waurishuk drew some laughter when he challenged others speakers who had described children having headaches and gastro-intestinal ailments caused by sleep-deprivation. But he was cut off when he used an expletive to refer to those parents. “Stop babying your kids,” he shouted.

Jack Eschricht, a GHS student, said that earlier in the evening he had come home from after-school soccer practice and attempted to start homework.

“As I sat down to do my homework I could feel my eyes start to get heavy,” Jack said. “I think we should have later start times just because we’re tired.” 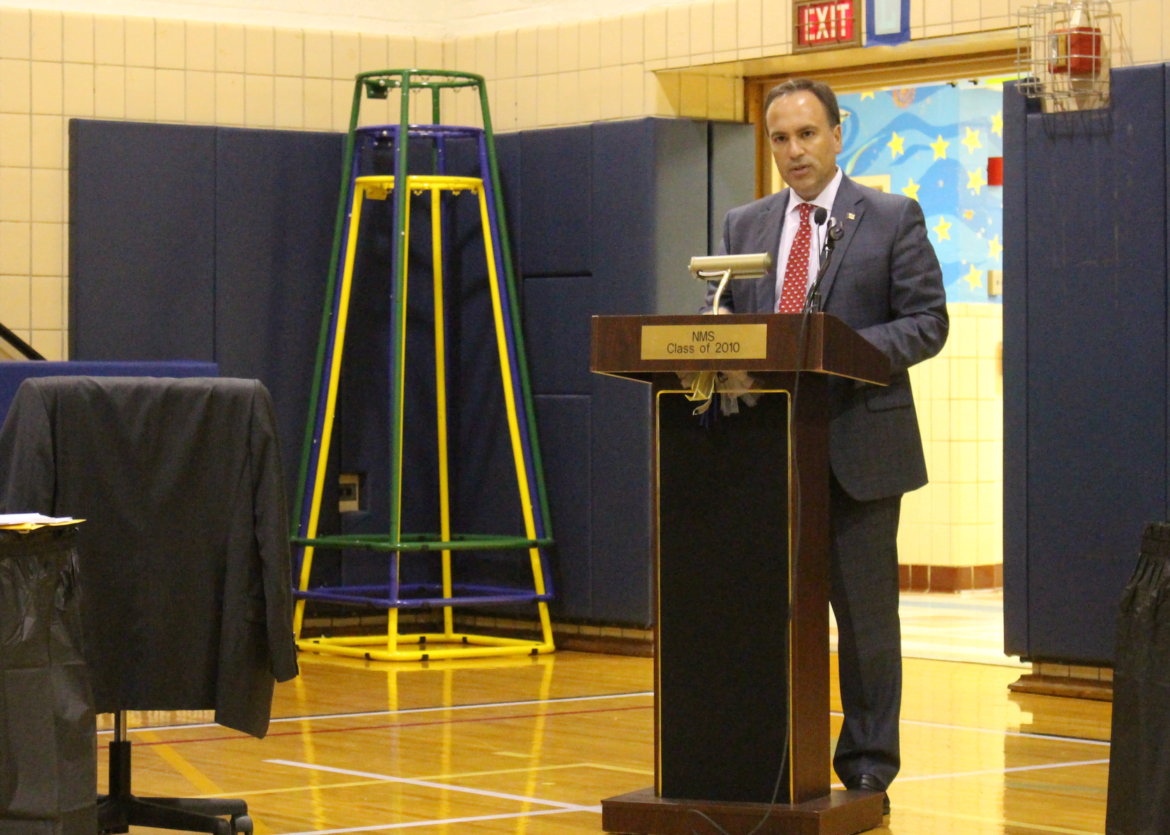 “My sense is that money should not be the obstacle in achieving this. You cannot put a price tag on one’s health,” Tesei said. “Children don’t get a do-over when it comes to education.”

“So I’m speaking in part as the town’s chief official, and in part as a parent of two elementary school children,” Tesei said. “I think this will have an impact. And that’s what’s most important.” 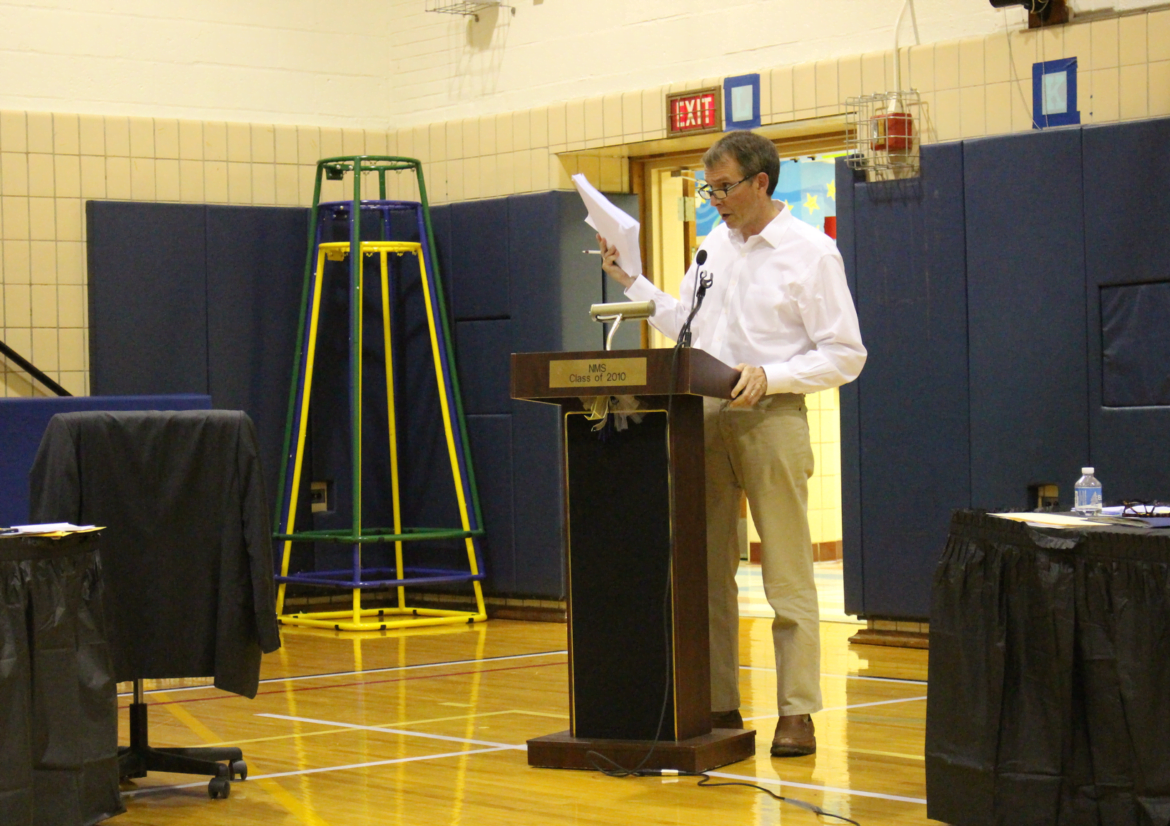 Wheatleigh Dunham presented a petition signed by over 2,000 people in Greenwich who support the change in school start time.  “Please do not ignore these voices. These are voters. These are citizens. These are tax payers,” he said.

Mr. Dunham thanked Mr. Tesei for testifying for the third time before the Board. “Please, I implore you to listen to him,” he said. “Criticism of how this will kill sports, to me, does not ring true,” he continued, adding that his sons play varsity sports. “You’ve got the facts wrong.”

Mr. Dunham said Dr. Toni Salvatore at Greenwich Hospital told him there are children in Greenwich being misdiagnosed and mistreated, given medications for conditions that are sleep-related.

“This is a ticking time bomb. It’s a matter of time before a parent files a lawsuit and takes this as an issue,” he warned. 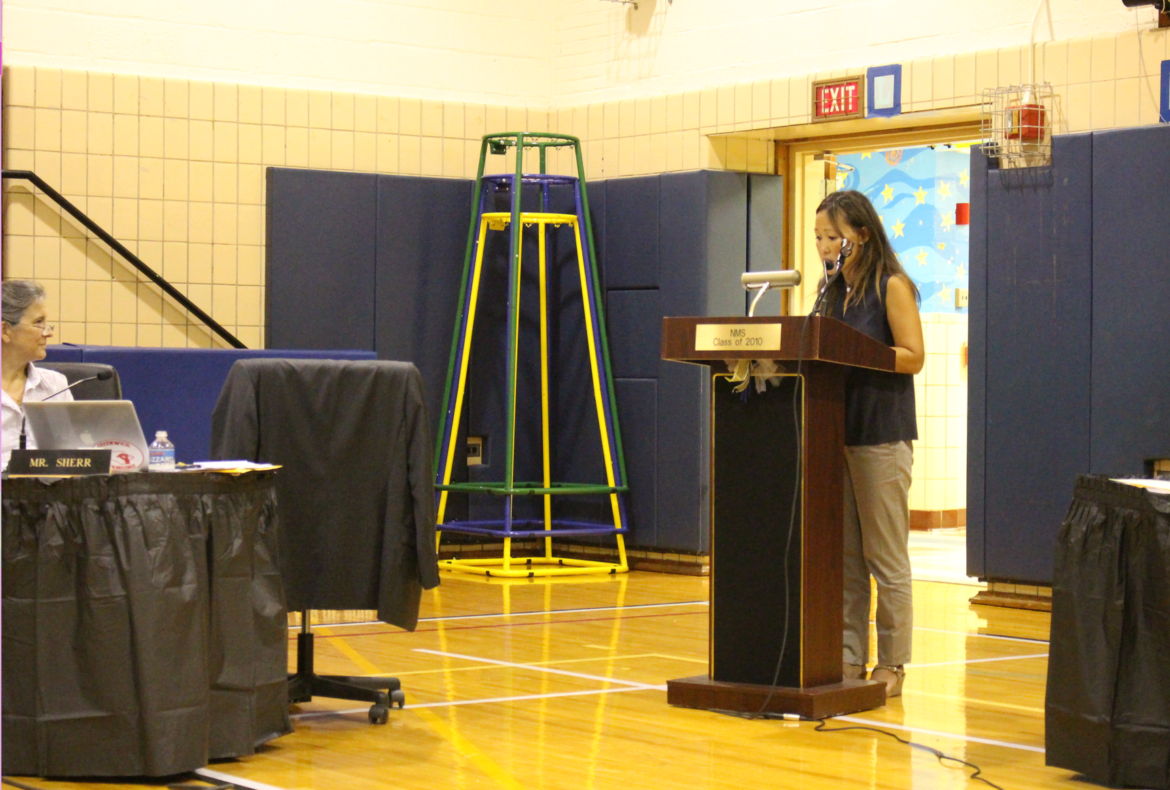 Sharon Sunoo said there hadn’t been enough vetting of the issues. “What’s fallen through the cracks is due diligence. We all agree that doing the research cannot be ignored. Surveys of teachers, parents and students were done. Tonight I feel that you are ignoring them.”

Sunoo said that high schools that have implemented later start times have lights on their fields.  “Build the infrastructure first. Then change the time to 8:30am,” she said, referring to the Effros Stipulation, an agreement between neighbors of GHS and the Town that severely limits the number of nights the stadium an be illuminated.

Kathleen Bernstein voiced concerns about athletes having to leave even earlier from school to go to sports competitions than they do currently. “This will directly effect the opportunities that my children have at Greenwich High School,” she said. “If we consider cutting into their extracurricular time as well as their class time, we’re drastically changing what their college applications will look like.” 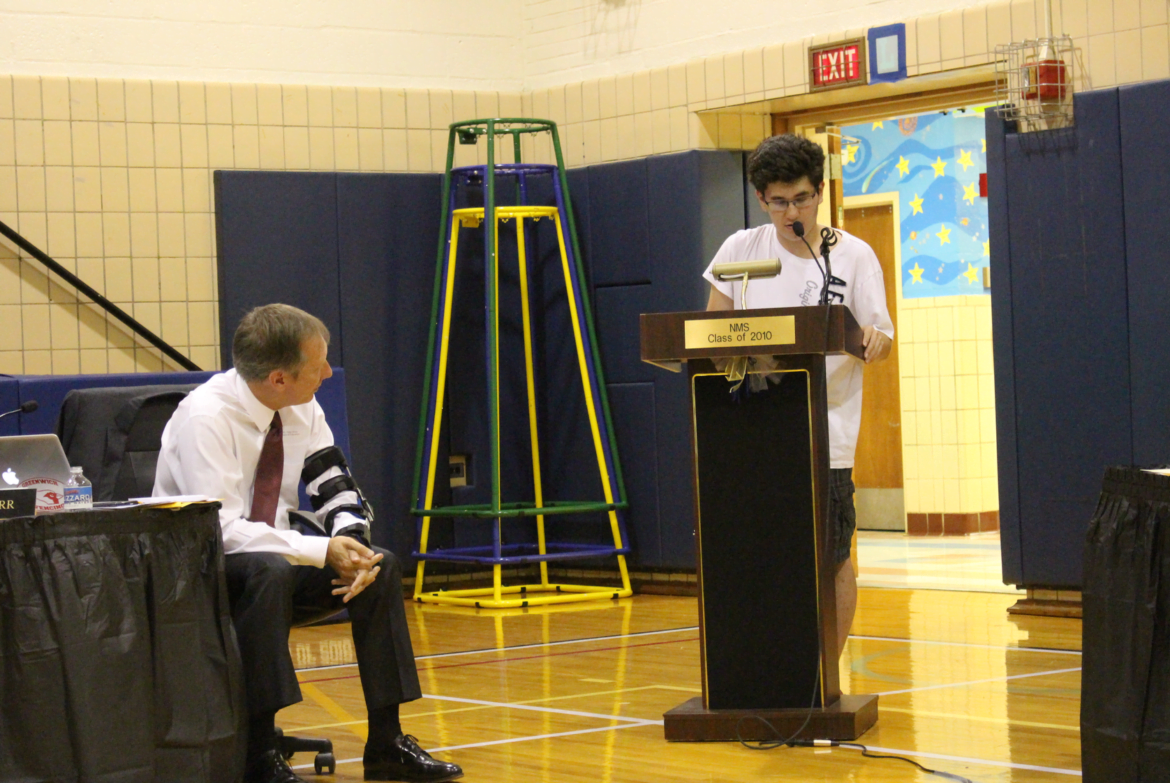 Sam Stewart, a GHS senior, said he had suffered from seizures that were diagnosed as stemming from sleep deprivation. Sept. 22, 2016 Credit: Leslie Yager

Sam Stewart, a senior at Greenwich High School said that in May 2015 he had the first of two seizures at school and was taken to the hospital. He said he’d been told the seizure was caused by sleep deprivation. Though he was fine over the summer, he the seizures resumed when school resumed. “Please be courageous and make a wise decision.” 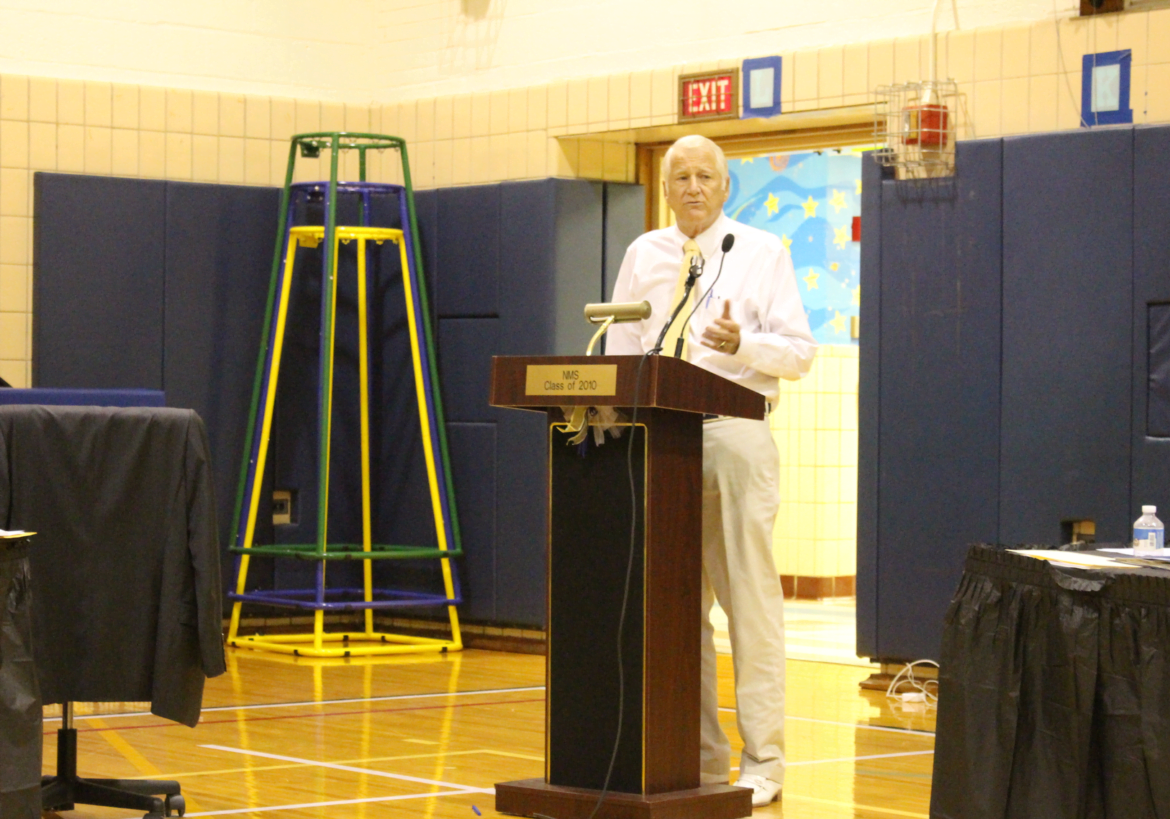 “I’m confused. I keep hearing these anecdotal suppositions put up against concerns of health and education,” he said. “We have heard of three clear cases of life and death situations and we’ve had tons and tons of expert testimony.”

Mr. von Keyserling pointed out that teens have their REM sleep between 5:00am and 7:00am, where as for adults REM sleep comes between 3:00amand 5:00am. “That’s when they process what they learned the day before,” he said. 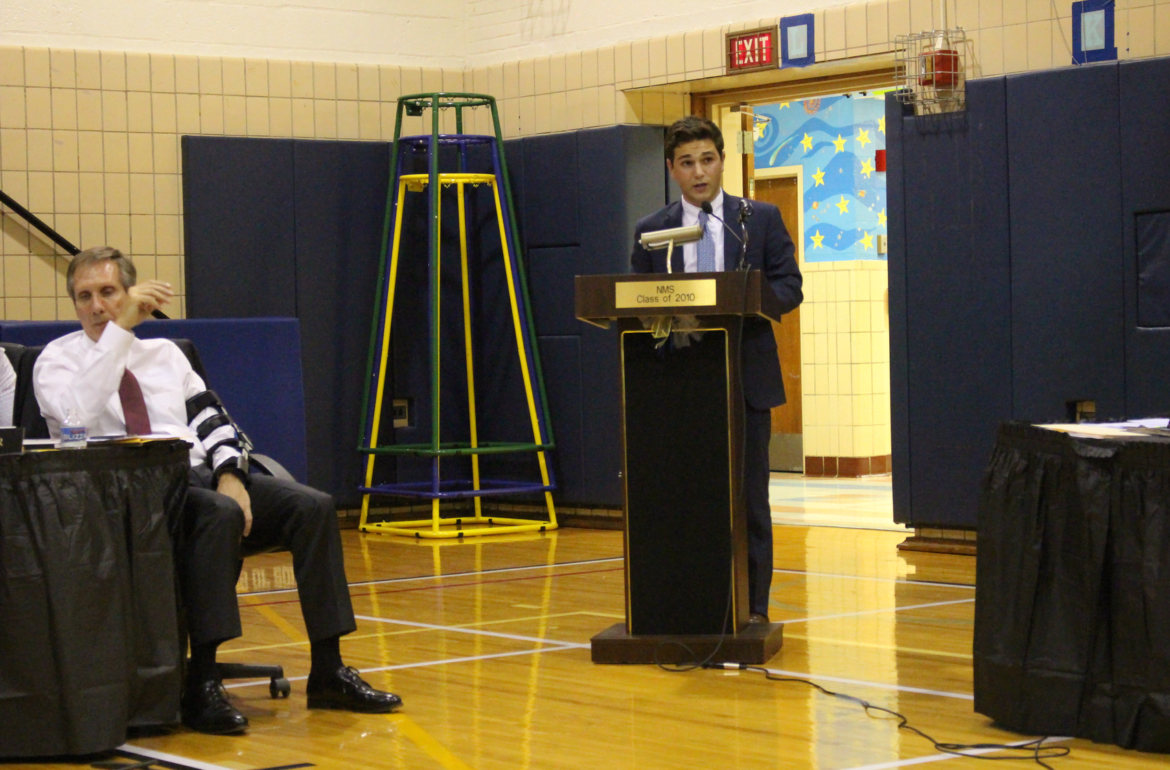 Student body president Joseph Migliaccio, said students Greenwich High School students had been surveyed last year. He said 38.1% were in favor of starting and hour later and getting out an our later, 17.4% said they were neutral, and 44.6 % had a negative opinion of the one hour delayed start. However, he said 58% of students had a positive opinion on starting just a half hour later.

Superintendent’s School Start Time Recs: I Will Not Be Here. Someone Else Will Have to Do It… I Have Hope