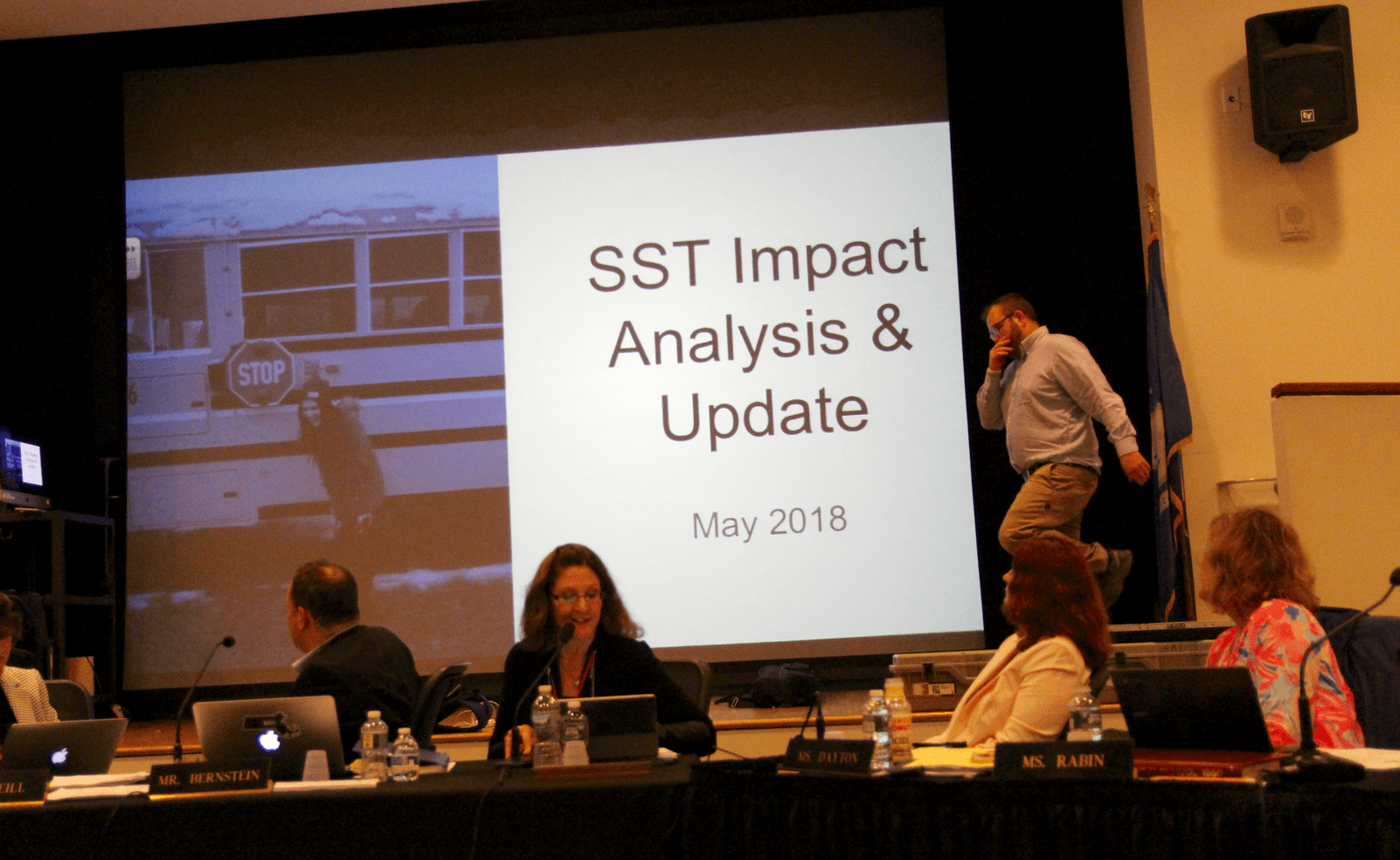 After trying to quash weeks of rumors. After convening a school start time steering committee and collecting input from relevant town departments – some that had been overlooked in past – Superintendent Dr. Jill Gildea, who inherited the task of implementing new school start/end times, surprised a few people on Thursday night when she introduced the concept of an “opportunity block” at the end of the day at Greenwich High School.

In a packed gym-auditorium at Hamilton Avenue School, Dr. Gildea said she’d boiled down three options for a potential fix that would address in particular, the end of day traffic and athletes’ travel schedules, as well as extra-curriculars, volunteer, work and family commitments.

She said she settled on the option that retains new start and end times, but rejiggers the lengths of blocks to create a new non-rotating block at the end of the day, an “opportunity block.” 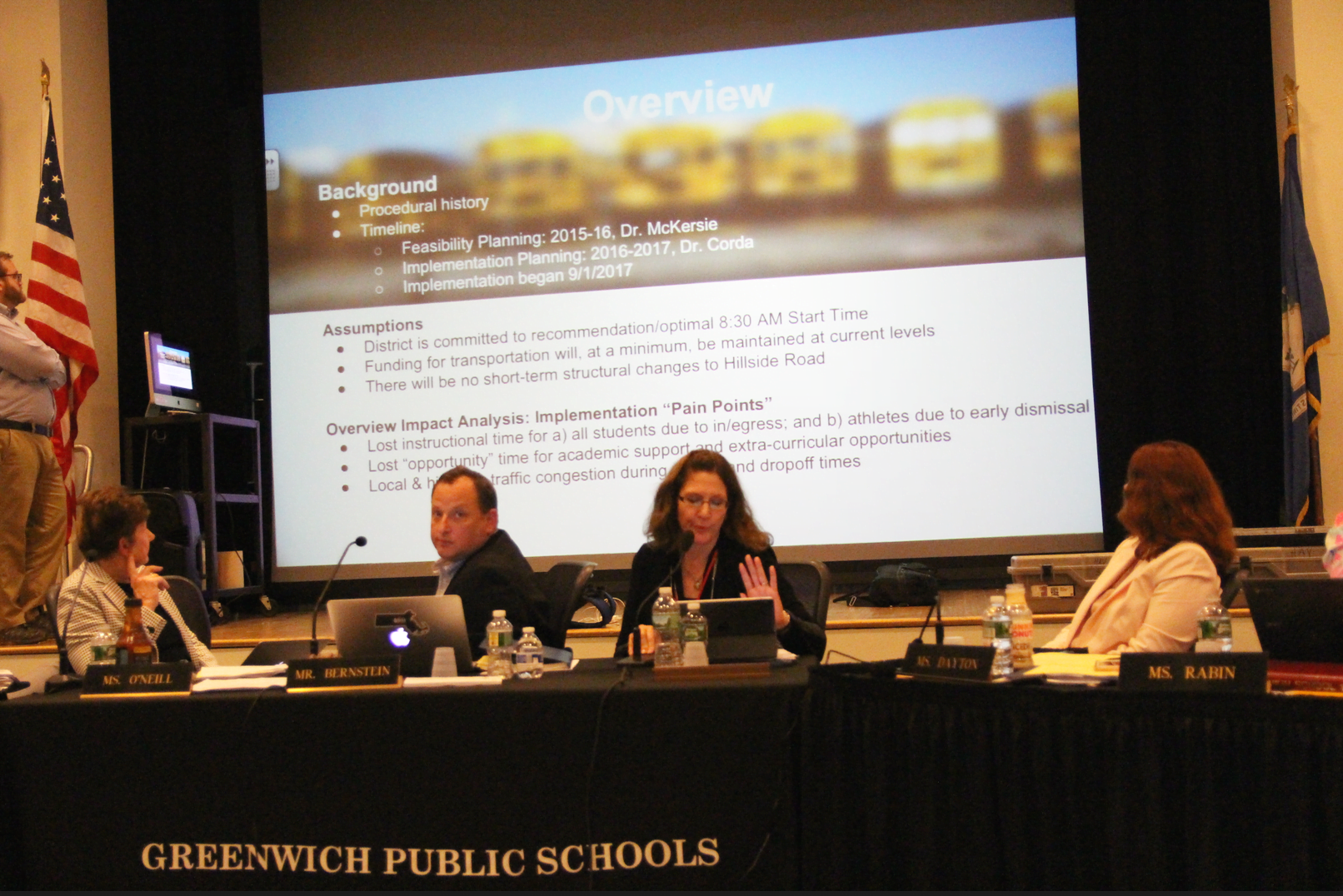 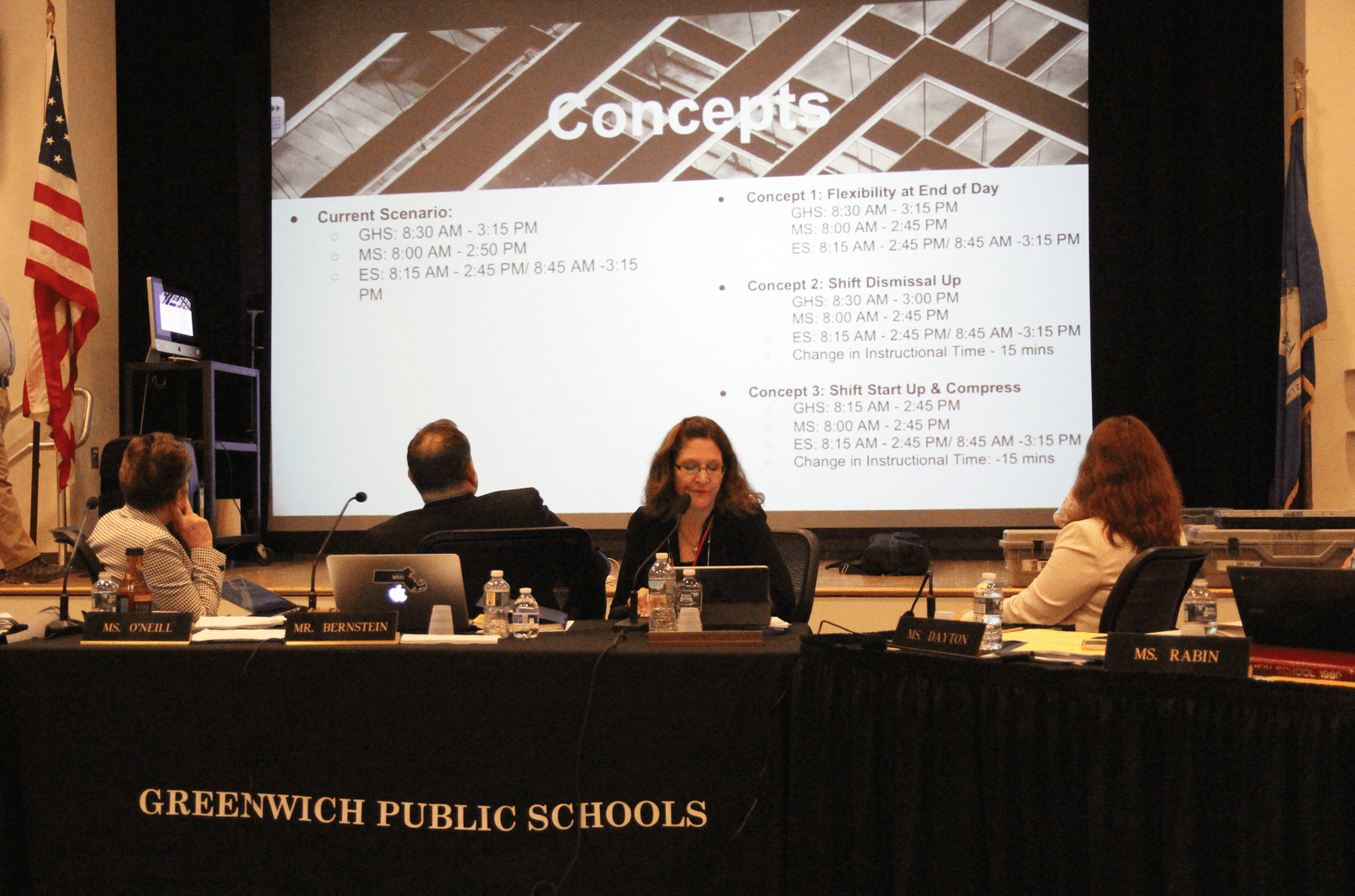 Gildea went through three scenarios. One would shift dismissal to 3:00pm from 3:15.

A second scenario was essentially one proposed by GHS headmaster Dr. Winters’ in his May 14th editorial suggesting a “common sense compromise: shorten the school day by 2½ minutes per instructional block (15 minutes total per day) and move the start time back to 8:15am.

Gildea noted that Winters’ idea was one that responded to students.

However, Gildea nixed that idea, saying, “The district is committed to the optimal 8:30 start time.”

Instead she recommended a scenario that would maintain both start and end time, but add flexibility at the end of the day.

(In all three scenarios middle school dismissal would shift from 2:50 to 2:45pm to give the buses 5 minutes more. “Historically middle schools have been five minutes longer; we don’t know why,” Gildea said.)

Gildea recommended maintaining the GHS 8:30am to 3:15pm school day and its rotating block schedule, but shaving minutes of each block to create a permanent “opportunity block” at the end of the day.

She said it the “opportunity block” would ensure athletes don’t miss a heavy academic class, factor in traffic and build a model program at the high school that permits students flexible entry and exit in the afternoon.

Gildea said GHS is well above the five hour minimal instructional day, and by shaving off minutes from each block, GHS remains in compliance.

Gildea said the “opportunity block” would engage students and staff with enrichment and enhancements, as well as provide opportunities for catching up.

“It would ensure staff and students have time to connect, close opportunity gaps, make up work related to early egress for student athletes, and give us a place to really do some of the innovative work we’re doing as a district,” Gildea said.

The superintendent pointed out that the future of education is more personalized learning and possibly some online courses.

“Envisioning future schools, coursework will be offered in a variety of ways and formats in an anywhere, any time learning environment,” she said, adding that in the future GHS may have partnerships with places like JM Wright Technical High School or Norwalk Community College, or even college courses coming in to GHS.

With an added block at the end of the day, there is potential to bring in a coding class, a personal finance class, personal branding, test prep, college visits, health fairs and assemblies.

“We’re working to maintain the principal of an 8-1/2 to 9 hour sleep cycle, understanding that the later high school starts, the easier it is for most adolescents to maneuver,” she said. “I’m sure you’ll see continued improvement of the implementation,” she said.

Board members reacted with surprise.

“Thank you so much,” Jennifer Dayton exclaimed. “I’m very encouraged that you have found a solution that is going to work for as many students as we can accommodate. …I think it fits perfectly into a personalized learning plan.”

Dr. Francis and Peter Sherr said they were very pleased with the solution.

However, Ms. Stowe and Ms. Olssen voted against it, stating that they had not had enough no time to consider the idea, given that it was a surprise to them on Thursday night.

Voting against were Ms. Stowe and Ms. Olssen. 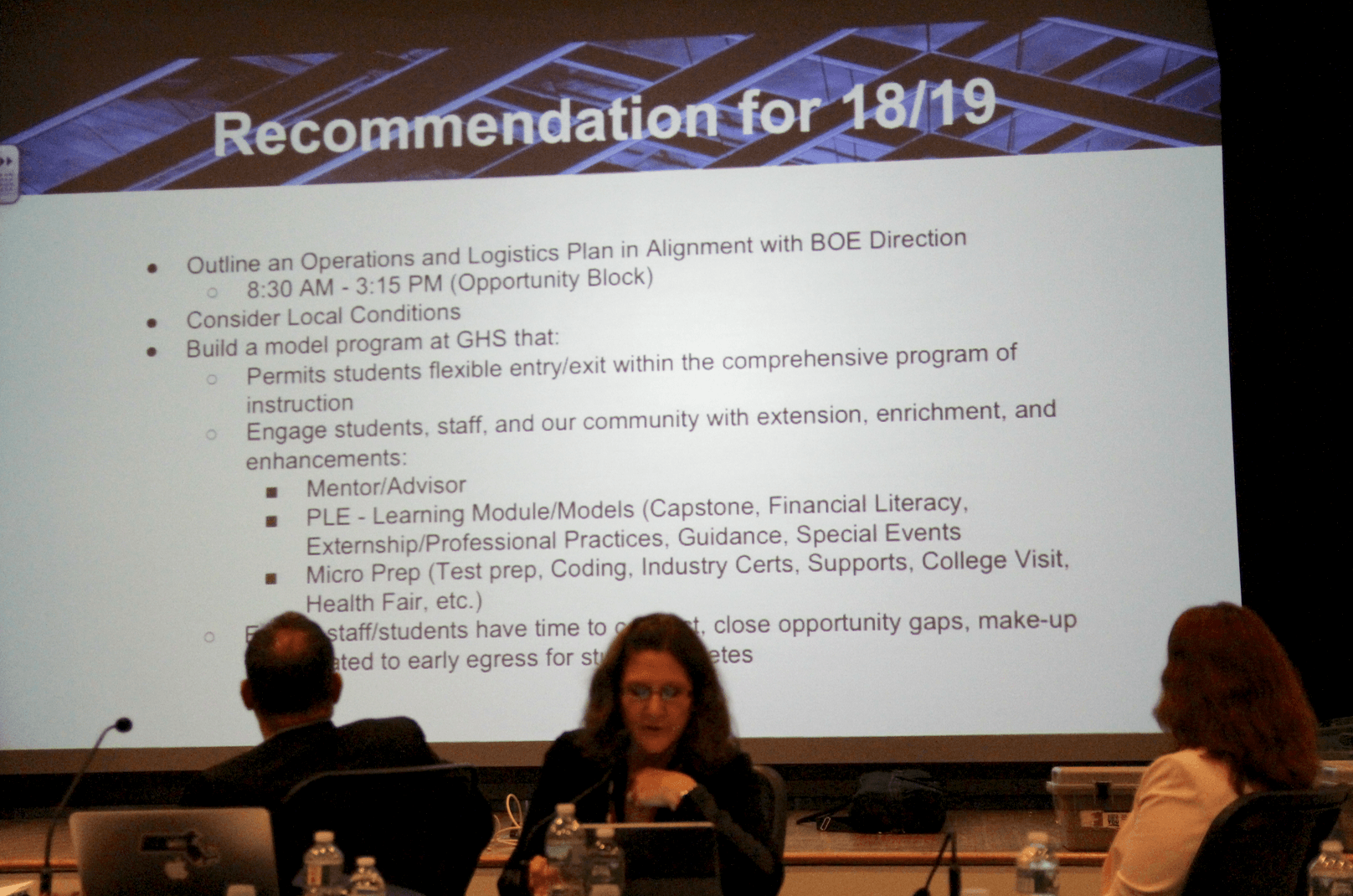