“There’s going to be impassioned views on both sides of this because there is a lot of stakeholders in this,” Mr. Sherr said, but he stressed that the steering committee members must be objective, “honest brokers.”

“There is somebody on the committee who is very involved in student activities and is impassioned about their job…walking around the neighborhood and across town, just vigorously against the change,” Mr. Sherr said. Directing his next comment to the Superintendent, he said, “I would hope at the next meeting that maybe you could spend some time resetting the approach of the committee members so that they all understand what we’re trying to accomplish. They need to be calm and thoughtful.” 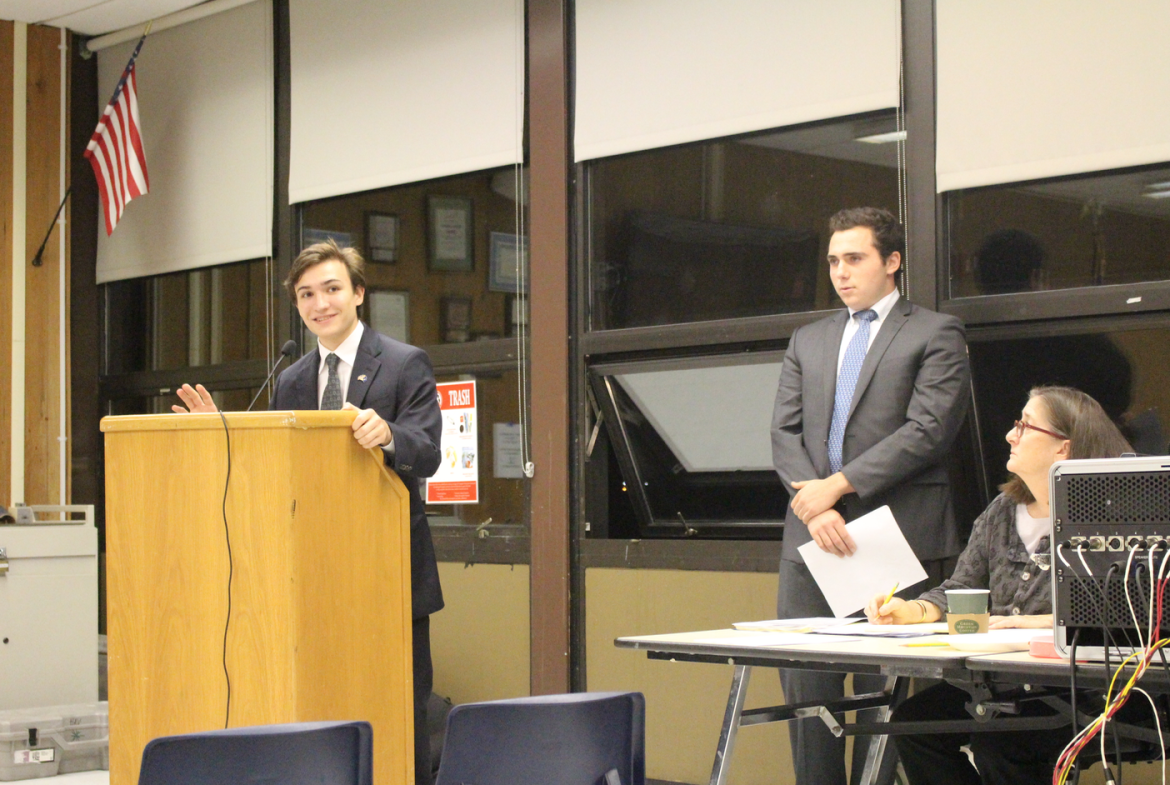 Student government leader Spencer Faragasso said he had asked many students for their personal responses. He said one student described being so tired every morning that they pretend to go to the bathroom during their first block class and take a five minute nap. He said another student described having to wake up at 5:45am in order to have time to get dressed, have breakfast and get to school on time. He said that student is so tired during the day that she goes home after school and has a four hour nap.

Indeed the student government leader said he too goes home and sleeps for four hours, describing it as “Sleep, part 1.”

“Clearly the students are impacted immensely,” he said. “We need more sleep. It’s as simple as that.” Faragasso said soon students will put together a survey to yield more accurate data and understand exactly what the students want.

Joseph Peters, the senior class president, said that there is sentiment among students at GHS ranging from those who vehemently support the school start change to those who adamantly oppose.

“While many students express interest in changing the start time, others are concerned about how it would impede after school sports, clubs and activities,” he said, though he agreed the root of the issue is we just don’t get enough sleep.

Peters said time management is important, and academic rigor is key, but that more strict limits on homework than the current “guidelines” would go a long way toward a healthier amount of sleep.

Carol Sutton, who represents roughly 900 members of the teachers union said that to call start time “a hot button item” is an understatement. She described the issue as what everyone is talking about and “a litmus test” for Board of Education candidates.

“Teachers know that all is not right with the students and recognize the potential benefits of a later start time for academic performance, as well as the mental and physical well-being of the kids,” she said, but she added that students are just overloaded with coursework, activities and sports.

Sutton said in her 30 years of teaching she has seen students nodding off at their desks and exhibiting symptoms of depression and exhaustion. She said that as a parent, she witnessed her son’s metamorphosis from a bright-eyed morning person to a crabby kid who could not be aroused by an alarm or threats.

Sutton recalled that when she was in college, students were not allowed to take more than four classes, and the classes met a total of 3 hours a week. She pointed out that some GHS students are taking 4 or more AP college level courses, in addition to their other requirements and spend 7+ hours in the building at GHS.

“A lot of our athletes participate in GHS teams and then, after practice, they go to another practice with a club team or travel team before tackling homework late in the evening,” Mrs. Sutton said.  The teacher union president said teachers want a broader and deeper exploration about why  some students walk through their years at GHS “in a trance,” and others are not reaching their potentials.

“We hope that the strategic plan will provide the impetus for this broad discussion,” she concluded.

Parent Wheatleigh Dunham said that at the previous night’s school start forum, there were eyes and ears from outside our town.

“Parents in other districts are watching Greenwich,” Mr. Dunham said, adding that he didn’t think the costs associated with different options have been clear clear enough. “We ask our students to show their work. We’re asking you to do the same.”

In his Superintendent’s report, Dr. McKersie said two of four start time forums have taken place, and two remain, describing them as sessions of a time for the administration to listen.

The Superintendent said that preferences are beginning to emerge. Specifically, he noted some parents of elementary school students have asked that if there is a change that the elementary students not have to go to school early. 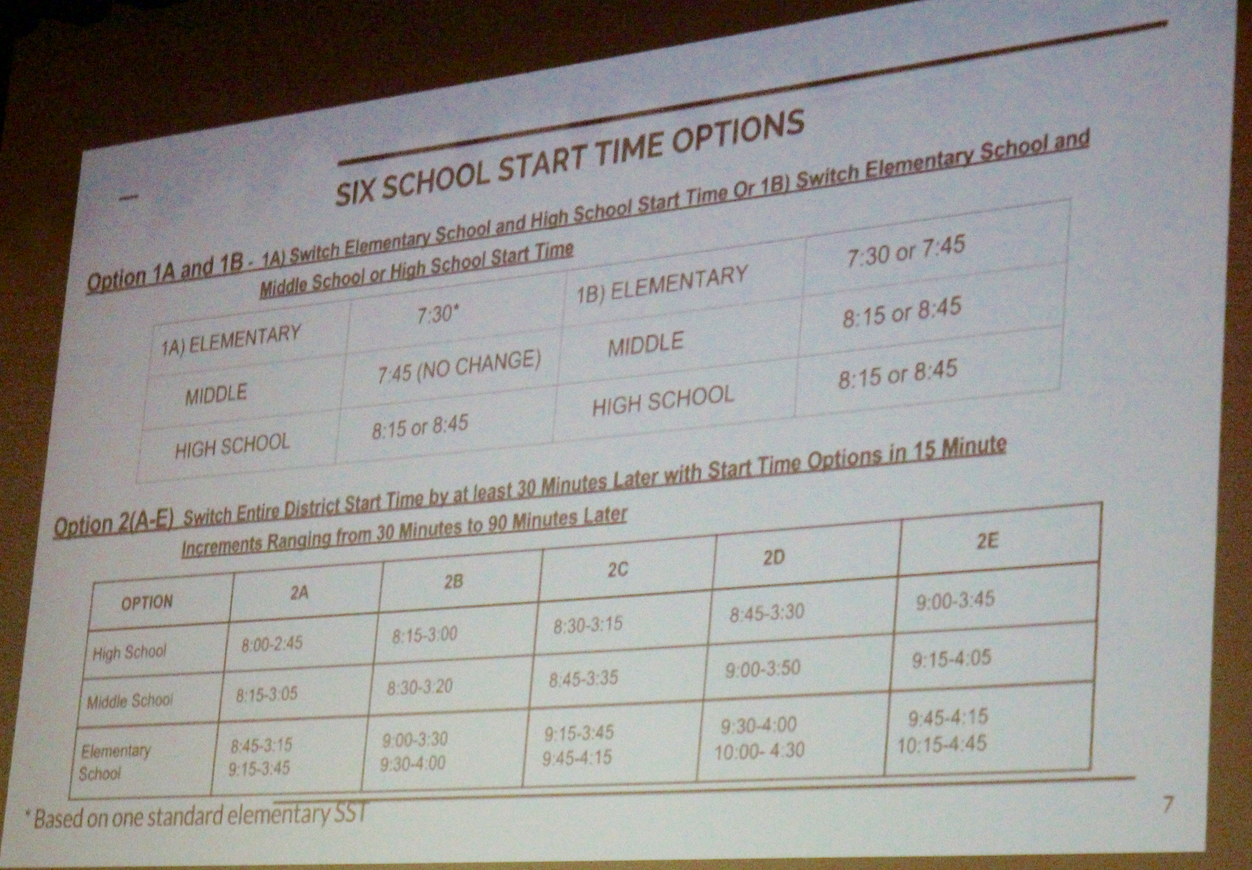 “You begin to see option 2C mentioned the most,” he said of the option that involves switching the entire District start time by a full hour, adding that option 3, (the Flex Schedule), option 5, (the “Recharge” option), and option 6, (the no-change option), all received doubts. 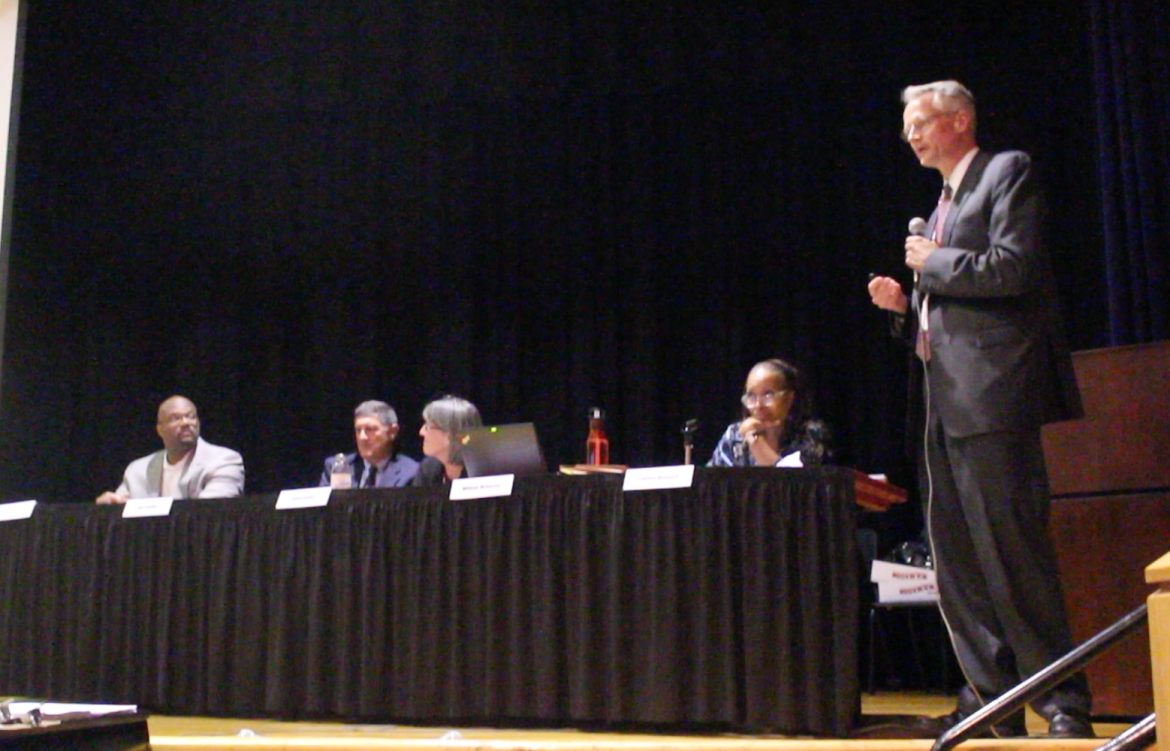 Dr. McKersie said a “broadbased RFP” had gone out to seek a consultant to analyze all aspects of Greenwich Schools busing, including the special education and private school bus obligations. He added that Dr. Winters is working with the high school students on the student survey.