“The students of Greenwich High School and I are in support of searching for a solution to this growing crisis,” Faragasso said. “We need our rest. It’s as simple as that.”

“I say from personal experience that too many students fall asleep in class or are so tired that they can’t even pay attention to the lessons being given to them.” – Spencer Faragasso, Greenwich High School Student Government President

“There, high school students received and extra additional 35 minutes of sleep. Teachers saw this as an absolute success. They reported students were more active in class. Even sporting teams were saw boosts in their performance.”

Faragasso beseeched the school Board to consider the need for change. “This issue means a lot to the students of Greenwich High School,” he said. 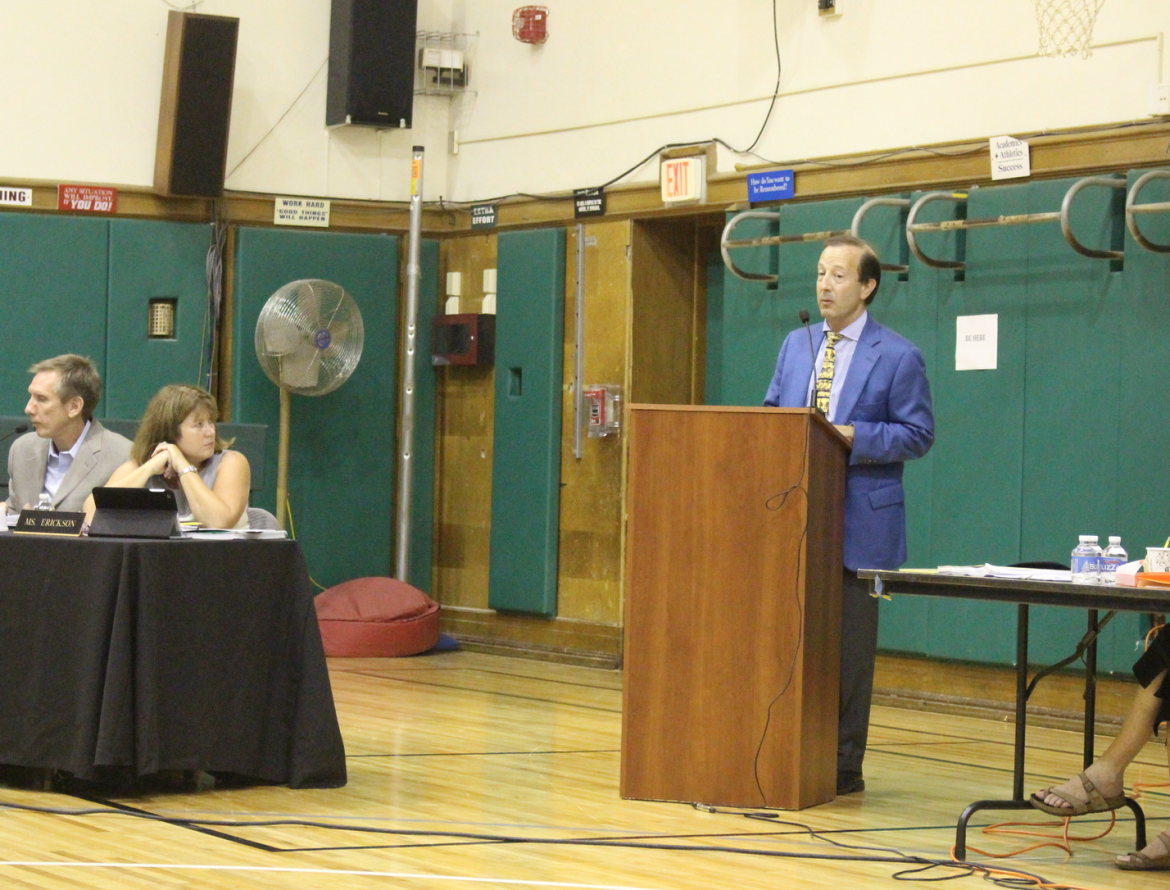 Alexander Weindling has a child in elementary school, one in middle school and a third at Greenwich High School who he said goes off to school looking [ale, drawn and like a racoon due to lack of sleep. Credit: Leslie Yager

During the public hearing portion of the meeting, three fathers spoke passionately on the topic. Alexander Weindling said he has three children – one at each level of school.

“For three children I’ve watched the elementary school child wake up at 6:00am and waste an hour of nonconstructive time before going to school,” he said. Mr. Weindling said his oldest just started 9th grade at Greenwich High School, and is already challenged by the start time.

“This is a young man who loves school and has been engaged at school. I have to drag him out of bed at 6 o’ clock and push him out in the street to catch a 6:38 am bus. He is sub optimal at that time.”

Weindling said his son goes leaves for school, “tired, pale and drawn and looking like a racoon.”

“It’s going to be hard work to change this bus schedule,” Weindling said. “They’re working hard. We’re testing their resilience with this current start time and we need to be do better.” 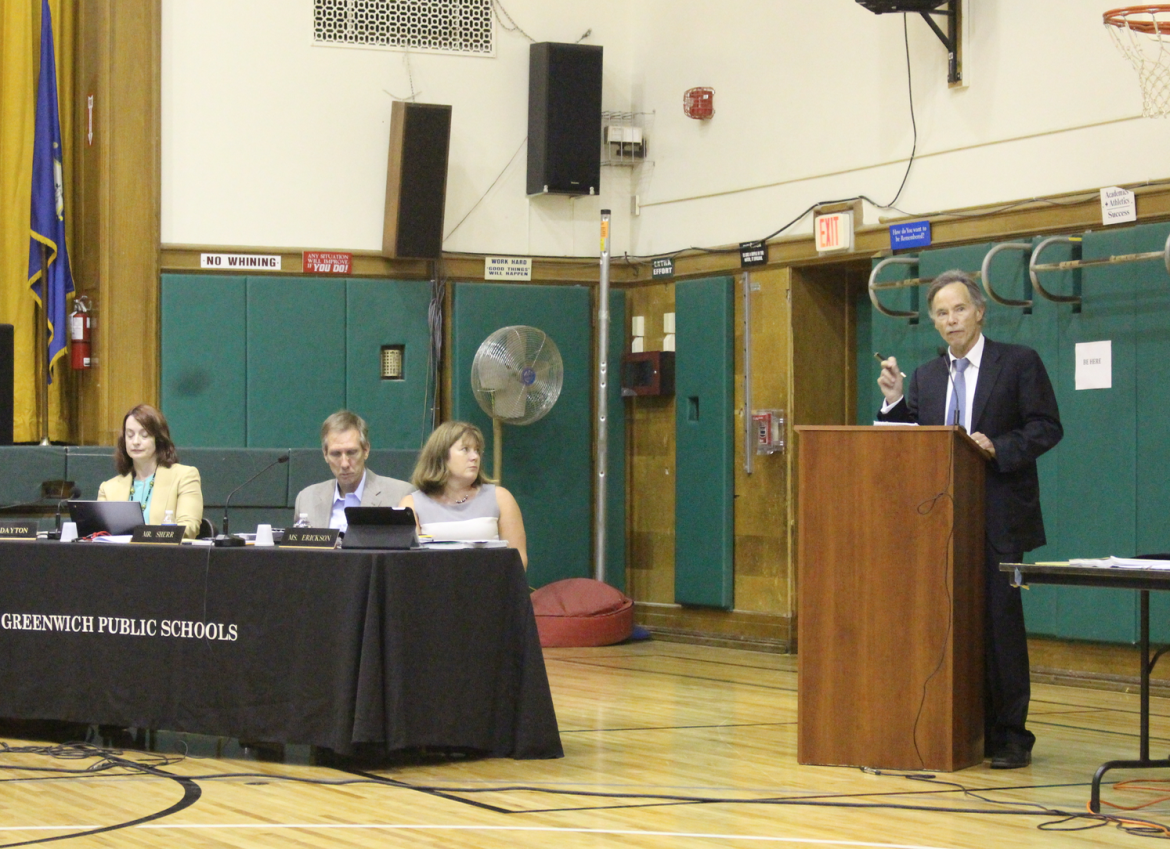 Jim Healy said it is very sad to wake his son up from a deep slumber at 6:15am to push him out the door to catch a 6:38 am bus when he is “sub optimal.” Credit: Leslie Yager

Jim Healy said it makes him sad to have to wake his son from his deep slumber at 6:15 am.

“At best he’s had 7 hours of sleep, which is almost 2 hours of sleep deprivation,” he said, citing Circadian rhythms that make it difficult for teens to fall asleep. “It’s pretty clear what needs to be done,” he concluded. “Compromises have to be made — bus scheduling, sports scheduling — but the last compromise we want to deliberately make is to compromise their mental and physical well being.”

The third father to speak out was Jon Michals, who described his daughter as having walked around in a constant state of low-grade exhaustion, ultimately becoming seriously ill with a virus that caused her to miss many days of school.

“Her near unconscious collapse culminated in a late night visit to the emergency room,” he said, adding that in in his opinion the illness correlated to her getting on average, just 6 hours of sleep.

“Changing school and bus schedules will probably cost money in a tight budget. When your child’s health is an issue, money is somehow always found. Lack of teen sleep is tilting teens away from robust well-being and toward chronic low-grade exhaustion.”

Just last week, Superintendent McKersie spoke at length on WGCH radio 1490 about changing the school start time. “Anyone who says I’m dragging my heels on this is wrong,” the Superintendent told host Tony Savino. “Most superintendents aren’t touching this.”

“Right now it’s a fast track to consider options for the 2016 school year,” Dr. McKersie said. “I have to submit a budget in November to the Board and have to know if there will be a cost for school start time.”

On Wednesday during the mental health fair at Greenwich High School, Amy Badini, who is the Communities 4 Action Chair of the Regional Youth Network and the Outreach Club advisor at GHS, didn’t mince words. “The steering committee has several people on it who are anti,” she said of the group selected to explore the possible school tart time change. “They keep asking ‘Can we do it?’ instead of How can we do it?'” she said.”The steering committee isn’t educated,” she continued adding that it has even been suggested that once day a week the students get a “sleep in day.”

“The data shows that that would be completely disruptive to their sleep schedules,” Badini said of the sleep-in day idea.

“And the Superintendent said he wants this to be cost-neutral, which is ridiculous,” she said. Badini said the non profit 501(c)3 group Start School Later has created a student advocate position at GHS, meaning the student can earn volunteer hours.