At one of the most well-attended Board of Education meetings in recent memory, two groups of parents vied to take the podium during the public hearing. The first of the two groups were parents urging the Board to implement a change in school start time at GHS without delay.

The first speaker was First Selectman Peter Tesei, who reaffirmed his support for the later start time initiative. “Recognizing there are many difficult issues before you, no other issue is truly defined as having impacts on our students’ health and well being,” he said.

“Be bold and focus on the immediate impact such a change would have for our students. Don’t let the fiscal issue drive the decision-making. Look at the underlying research and information indicating the improvements of  health of our students – that should take precedent.” – First Selectman Peter Tesei

Amy Badini, with a sophomore at GHS and two who have already graduated, and Heidi Scharfman, whose daughter graduated this past spring, both read pointed quotes submitted to the MoveOn.org petition for changing school start time in Greenwich. The petition is up to about 1,260 signers out of a revised goal of 2,000.

Anthony Lopez, who pledged to stay involved and run again for Board of Education after his unsuccessful bid earlier this moth, said that with school start time, “the entire community is calling out for something.” He urged the Board of Ed members to visit schools, meet people, and listen.

“I should be able to recognize every one of our board members if I’m in the grocery store,” he said, adding that the school start time change will impact all three of his children and that he signed the petition. 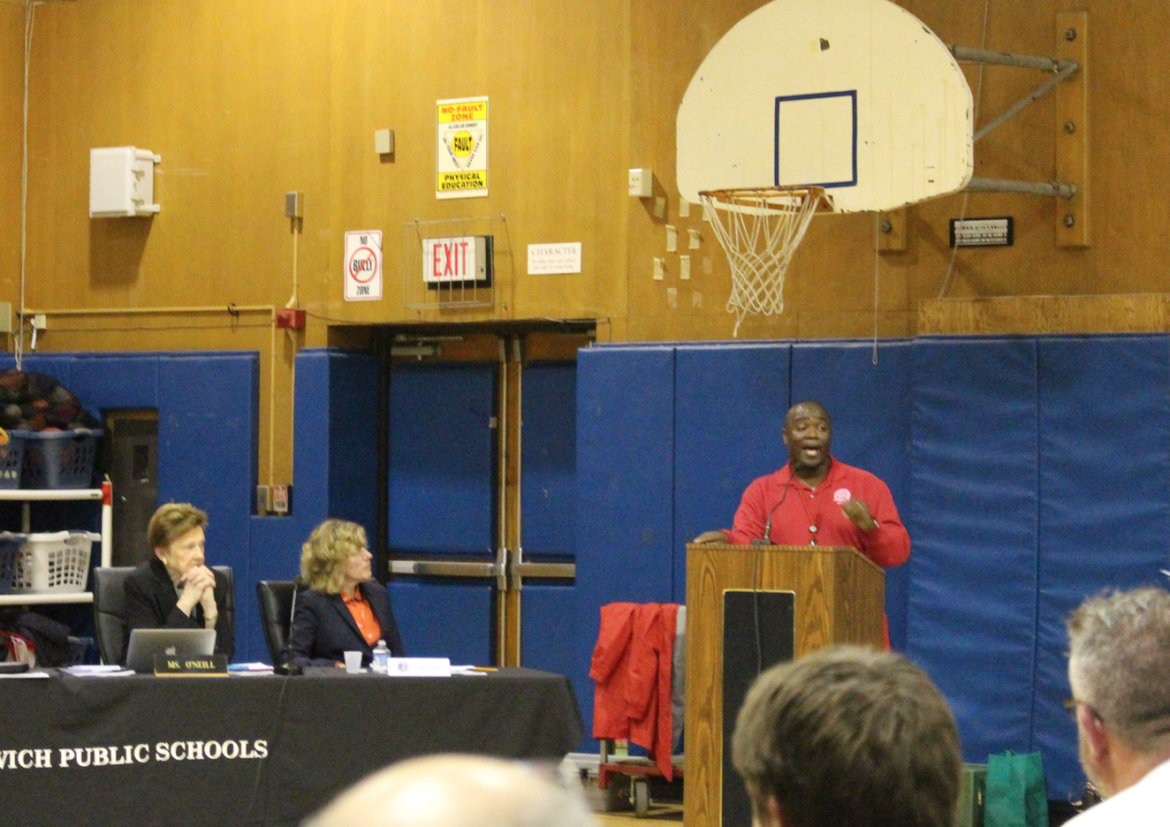 “Stress is very important, but we have to understand that more sleep helps alleviate stress,” Lopez said.  “I’m glad that you’re doing your due diligence, but I implore you to make sure we do this in a time frame that reflects the mandate. The health and safety of our students is paramount.”

Greenwich mom and psychologist Beth O’Donnell described sleep as the “scaffolding” that supports all other functions. She said it was unnecessary to spend money to commission a teen study stress, and although teen stress is a “related conversation,” she said it should not be the starting point. She urged that it not be the mission of the school start time steering committee to study stress.

O’Donnell said a school start time change should come before studies of stress, as it would have an immediate, significant impact. She said sleep mediates stress.

“If you do decide to spend money on a stress study, put it under the purview of the guidance department or school psychologists, who can take this on as a long term, ongoing effort,” she said.

O’Donnell said that changing school start time quickly will give the biggest bang for your buck.

Furthermore, she said that the Race to Nowhere website had updated information about stress. O’Donnell said over-achievement and even the college admissions process itself are culturally embedded and could take years of conversation to influence.

“Even if there were no homework, the sleep window still does not align with the biological needs of our teens,” she said.

Valerie Erde said it’s easy to “get caught in the weeds” of buses, sports scheduling, clubs, and commuting.

Erde said that earlier in the week she’d spoken to the superintendent of the Dobbs Ferry school district. Quoting Superintendent Dr. Laura Brady, she said, “‘The research is very clear. This is an adolescent health issue. You wouldn’t ignore teen smoking or drug use. You can’t ignore teen sleep deprivation. We can’t  let inconvenience stand in the way of doing what’s right for the kids. There is no other con side other than inconvenience,'” she said, quoting the Dobbs Ferry Superintendent.

The Dobbs Ferry Superintendent, Dr. Brady, said that she’d been girding for angst and complaints, but that had not happened, and that more teens were walking to school since the start time change.

After the public hearing, Dr. McKersie said, “We are working actively on how this can work in Greenwich. Most of the other districts cited tonight had a timeline like ours,” he said, citing Seattle specifically.

“We really are trying to do this right. The key decision point is transportation analysis. We’ve been running a busing system for 7,000 students, including private school students.”

McKersie said two consultants are being looked at for the transportation study. “What are the cost implications here?” he asked. “If there are significant cost implications, the Board has to grapple with how do we cover those? We have before you a very tight budget…There would have to be some very difficult choices to make.”

Dr. McKersie insisted that a stress study would not delay a school start time change.

“Dr. Winters is about to say to the steering committee, here are some other issues to think about after you study school start time. …don’t wait on the start time to figure it out, but you’d be irresponsible – tough word – if you didn’t also say there are two or three other things to think about. Homework has been mentioned. Where we are with AP’s have been mentioned,” McKersie said.

He added that because of the “very active digital learning environment” and a 24/7 environment that has to be monitored carefully, and have the cooperation from parents.

He said that while the district is working and waiting for the transportation study to come back, “Let’s get an independent statement on what the research tells us. It may tease out insights.”

McKersie said he proposes a timeline which would bring a forward a recommendation to the Board for a vote in May, for Fall 2017 implementation. 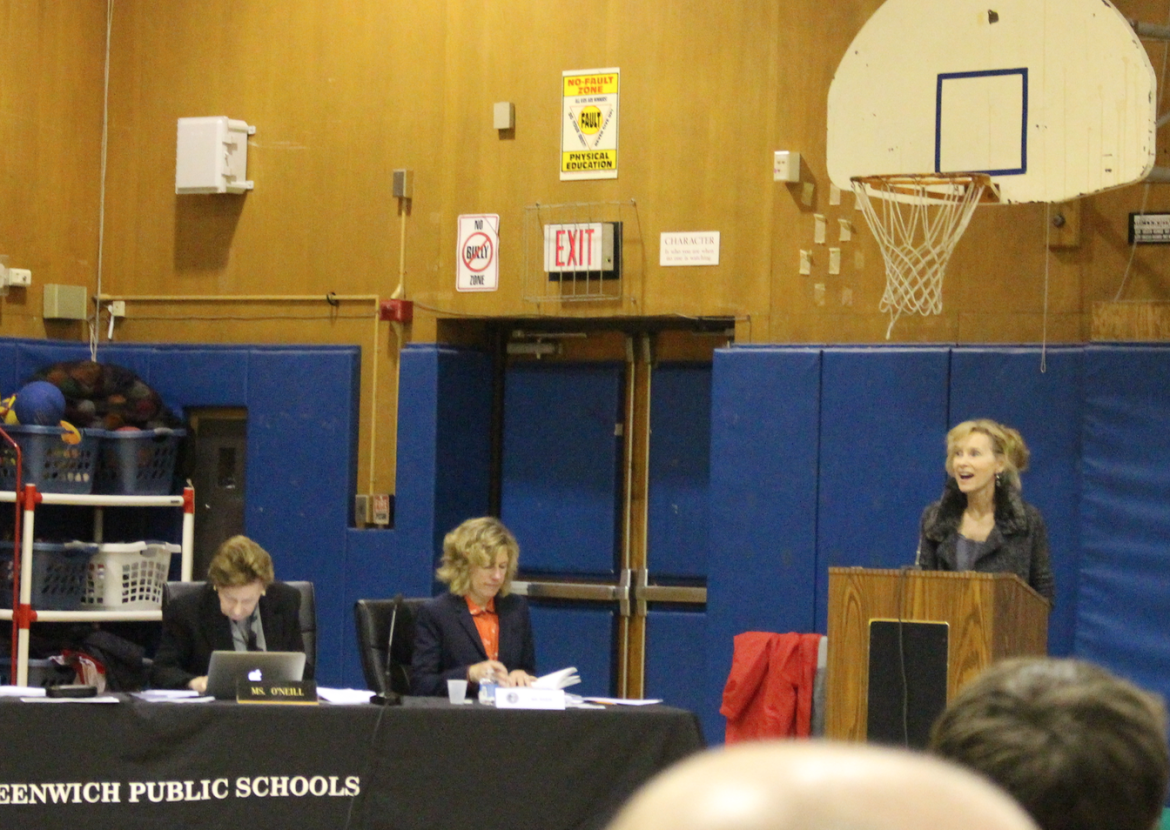 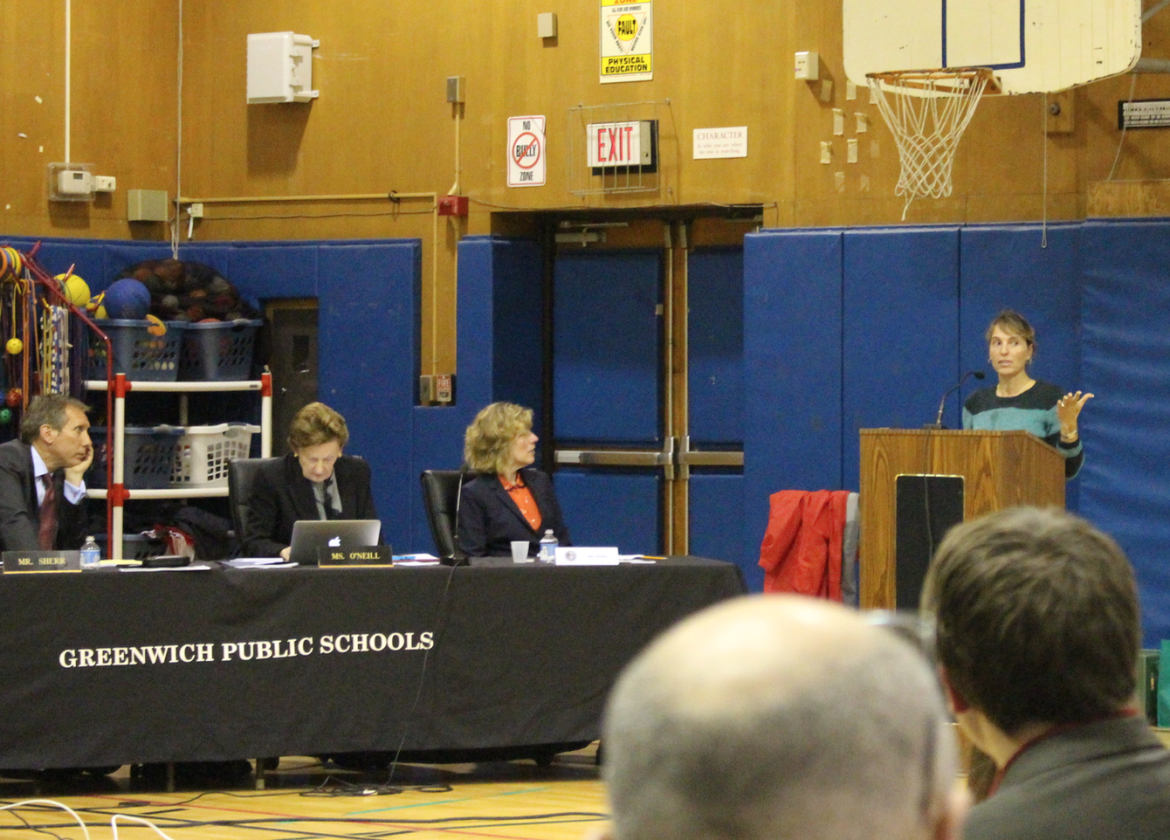 Amy Badini, a GHS parent and school teacher in another district spoke in favor of changing the school start time. Credit: Leslie Yager 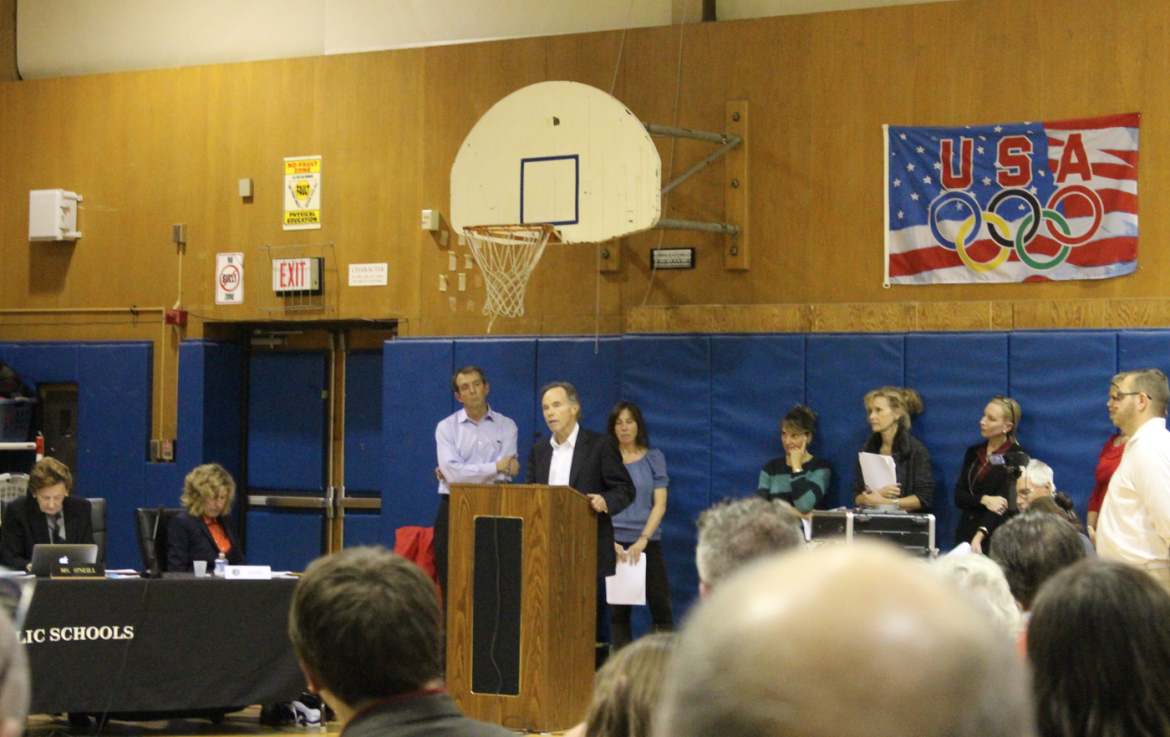 Several parents spoke in favor of changing the school start time at the Board of Education meeting, Nov. 19, 2015. Credit: Leslie Yager