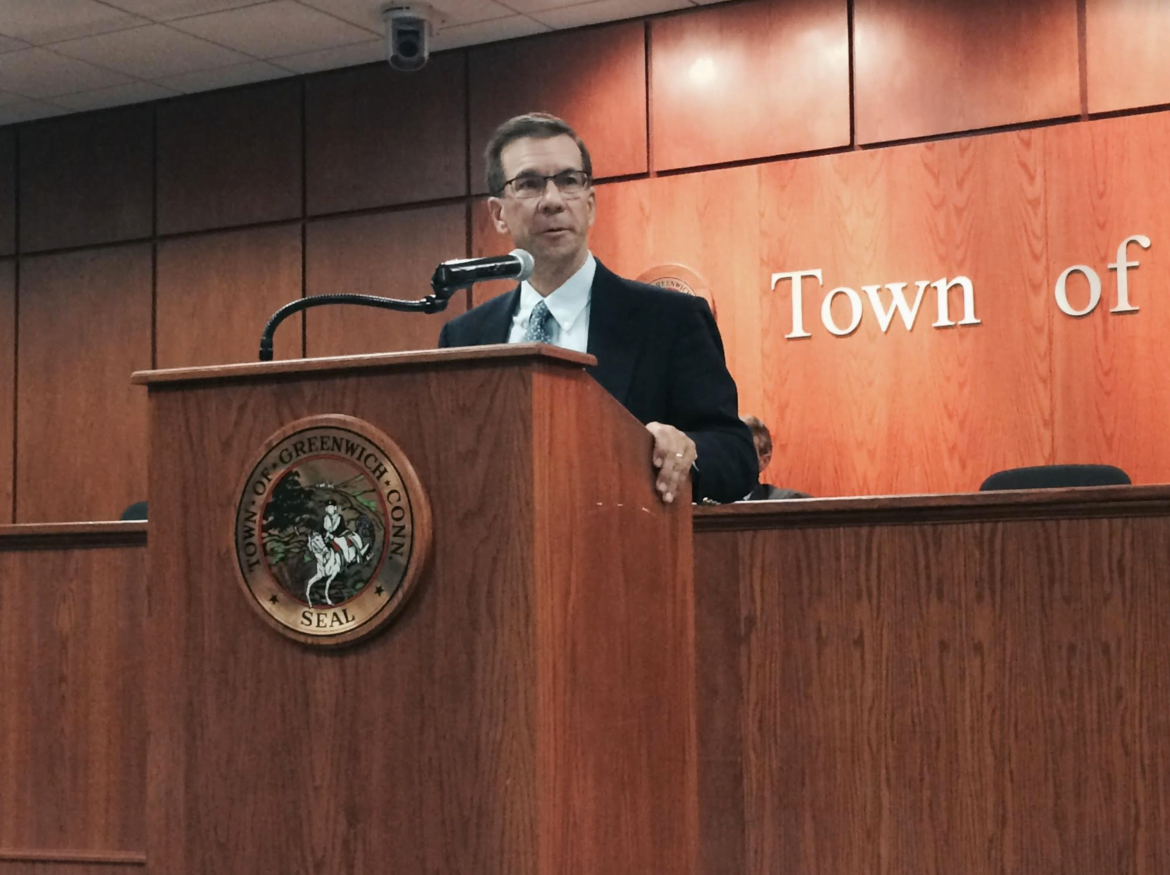 UPDATE, Sept. 14. After the three RTM committees heard from Mr. Popp, Mr. Walko and Mrs. Erickson, they broke out into their three committee meetings. All three committees voted in favor of the MI for a new New Lebanon magnet school. The full RTM will vote on Monday Sept. 19 at CMS.

Original Story: Sept 13, 2:30am. Three committees of the RTM – Land Use, Education and the Legislative and Rules – convened at Town Hall Monday night to hear from Matt Popp.

Mr. Popp did what is the right of any Greenwich resident, according to town attorney Wayne Fox. Popp formally opposed the Municipal Improvement (MI) for the construction of a new New Lebanon School as a magnet school. 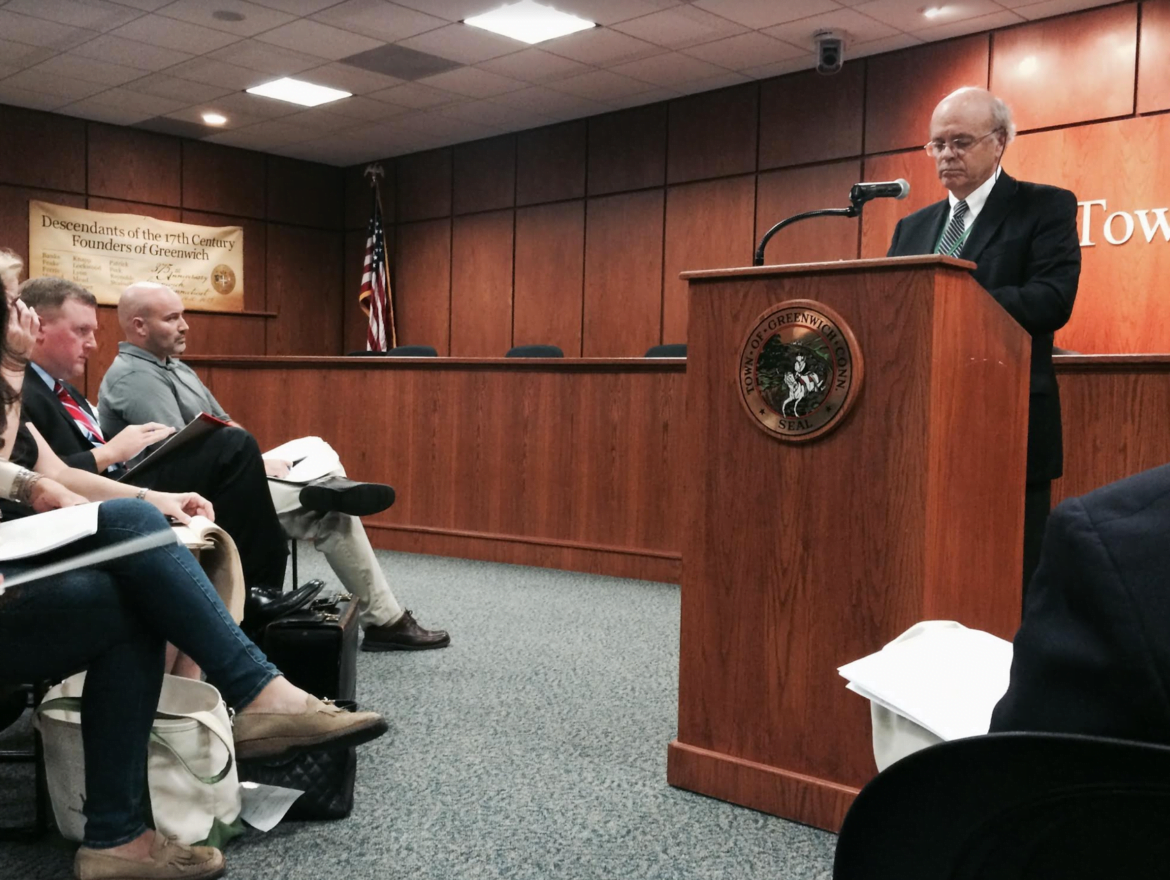 “There is a process by which an individual who is a property owner can challenge what the Planning and Zoning commission may have done, controlled by section 100 of our Charter, titled Referral of MI to Representative Town Meeting,” Town attorney Wayne Fox said. “It is up to you to determine whether it is consistent with the POCD. The P&Z commission determined that it was,” he said to the RTM members.

Popp argued that the new school does not preserve the natural landscape, which is inconsistent with the Town’s POCD. He said the wooded area behind the school buffers the neighborhood from air and sound pollution, and that the woods have been used for educational purposes.

“The woods are going to be cleared,” Popp warned, describing the ravine behind the existing school as a unique and valuable ecosystem.

“We’re supposed to protect the water quality,” he continued, arguing that water would go into a catch basin and right out into the Byram River, which Popp said does not meet the standards of the drainage manual.

“The school will be pushed into the ravine. You won’t even be able to see it when you drive by,” he argued. Also, Mr. Popp said the existing field would be shortened to accommodate a catch basin.

The crux of Popp’s objection to the new school was that school buses would worsen traffic in the neighborhood and the three-lane entry would not fit in with the neighborhood.

“The bus loop is about a half acre in size. There is no other place in Byram with a three lane entry. The high school doesn’t even have three lanes.

“…If you weren’t a magnet school you wouldn’t need the half acre bus loop and the school could remain on top of the hill and retain the character of the neighborhood,” Popp said. “In my opinion it is the bus loop that is driving the school into the woods.” – Matt Popp

Popp brought up the issue of costs, including those associated with cross-town bus transportation for magnet students.

He also suggested that if New Leb pulls students from under-enrolled Parkway School, there would be costs associated with closing that school, though Mrs. Erickson said there are no plans to shutter Parkway School.

Popp urged the RTM members to deny the MI. “You could still end up with an excellent building,” he said, pointing out that both the Cos Cob Library and the Teen Center had their MI declined, but turned out nicely. Popp said a better solution would be to “build an IB hilltop school.”

School Choice? The West Side of Town Loses Out

Popp argued that the magnet program at Hamilton Avenue School does not work and that it won’t work at New Lebanon either.

“I’d like to find someone from Old Greenwich Riverside, Cos Cob, or Parkway who are  going to put their child on the bus for 20, 25  or 30 minutes to bring them to a school in Byram,” Popp said. “I don’t think it’s going to work.” 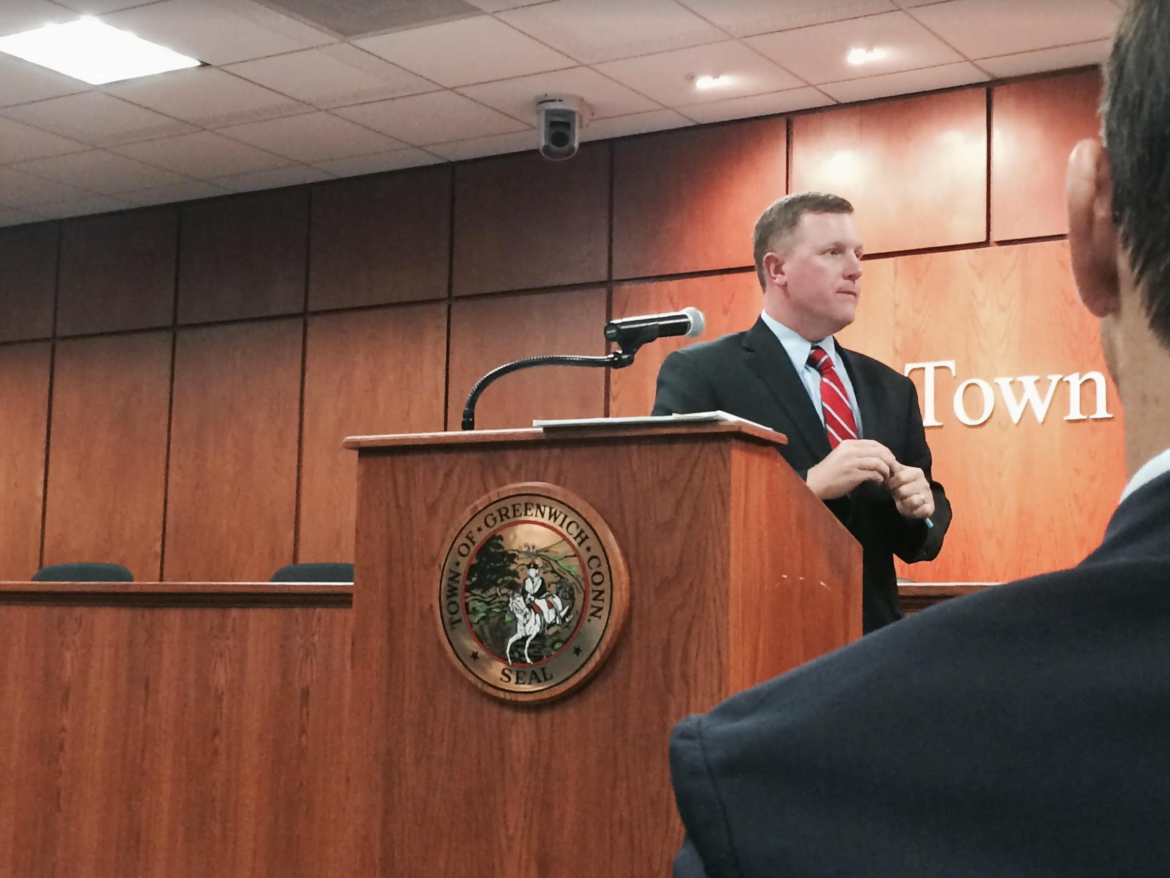 Steve Walko argued that the new school will not be “oversized.” Rather he said the size of the building was driven by the need to provide adequate “core spaces” including a full size cafeteria and gymnasium.

“Really not many from the Eastern side of town,” Mrs. Erickson said to a chorus of laughter.

Erickson acknowledged other elephants in the room: under enrollment at Parkway School and the concept of redistricting rather than creating magnet schools on the west side of town where schools haven’t been racially balanced.

According to a formula determined by the state, if a school’s racial minority enrollment is 25% more than, or 25% less than the average for the town overall, it is considered imbalanced. Principal Riccio said New Lebanon has 70% minority students. A school can also be cited for imbalance if it has too few minority students.

Erickson said that back in 2012, Greenwich received letter from the State about the district being racially imbalanced. “We had extensive community forums,” she said. “When we talked about redistricting as an option, it became very uncomfortable. I say the word uncomfortable, but there’s probably another word,” she said, to another chorus of laughter.

“I do believe more people would go to New Lebanon and Hamilton Avenue if there was more space,” Erickson insisted. “One of the fundamental problems of New Leb is a lack of core space, gym, cafeteria, playground and fields.”

She said with the new school it will also be possible to restore the former pre-K program, which would go toward the end of closing the achievement gap. “These kids need accessibility to preschool.”

Why not make under-enrolled Parkway School a Magnet?

RTM member John Duge asked Mrs. Erickson if the Board of Education had considered making Parkway School into a magnet school based to boost its enrollment.

She said Parkway has 25 classrooms. Six are used for specials. Two have been re-purposed into a science lab and computer room. Also there is pre-K at Parkway. That leaves two unused classrooms at the back country school.

“There is no way you can get the 14 sections of New Lebanon into Parkway,” she said, though that was not Mr. Duge’s suggestion.

Further, Erickson said 13 New Lebanon students attended Parkway as preschoolers and elected to stay. “Once people get up there they like it. It’s a great campus. It’s our only green school,” she said.

Peter Berg asked for examples of magnet schools that succeeded in achieving racial balance? Peter Bernstein, who is a BOE member and member of the New Leb building committee said Julian Curtiss is racially balanced as a result of its magnet program.

RTM’s Dawn Fortunato from district 3, a member of the Land Use Committee, asked whether the new building would proceed if the State discontinued the construction grant program and the town had to pay the full amount.

“If RTM denied the MI,  that would put us back to square one,” Mrs. Erickson said. ” The building committee doesn’t go away, but we would need to revisit everything, and I believe that would set us back.”

She said the state okayed the plan and that Greenwich expects to be reimbursed 62% through a diversity grant.

“We believe that if we have a vibrant IB community – we know from ISD that families are highly attracted to IB. Many of them don’t get into the IB program at ISD, they may be willing to consider New Leb, particularly if transportation is provided and they have a beautiful sparkling new school that’s on par with every other school in this district.” – BOE Chair, Laura Erickson

After Mr. Popp’s presentation and response from Mrs. Erickson and Mr. Walko, the group broke into their RTM committees. The full RTM will vote on the MI is scheduled to take place next Monday, Sept. 19.

Hamstrung at New Leb: Momentum Builds for Option 1 (into Ravine), but M.I. is for Scheme D (on Existing Site)