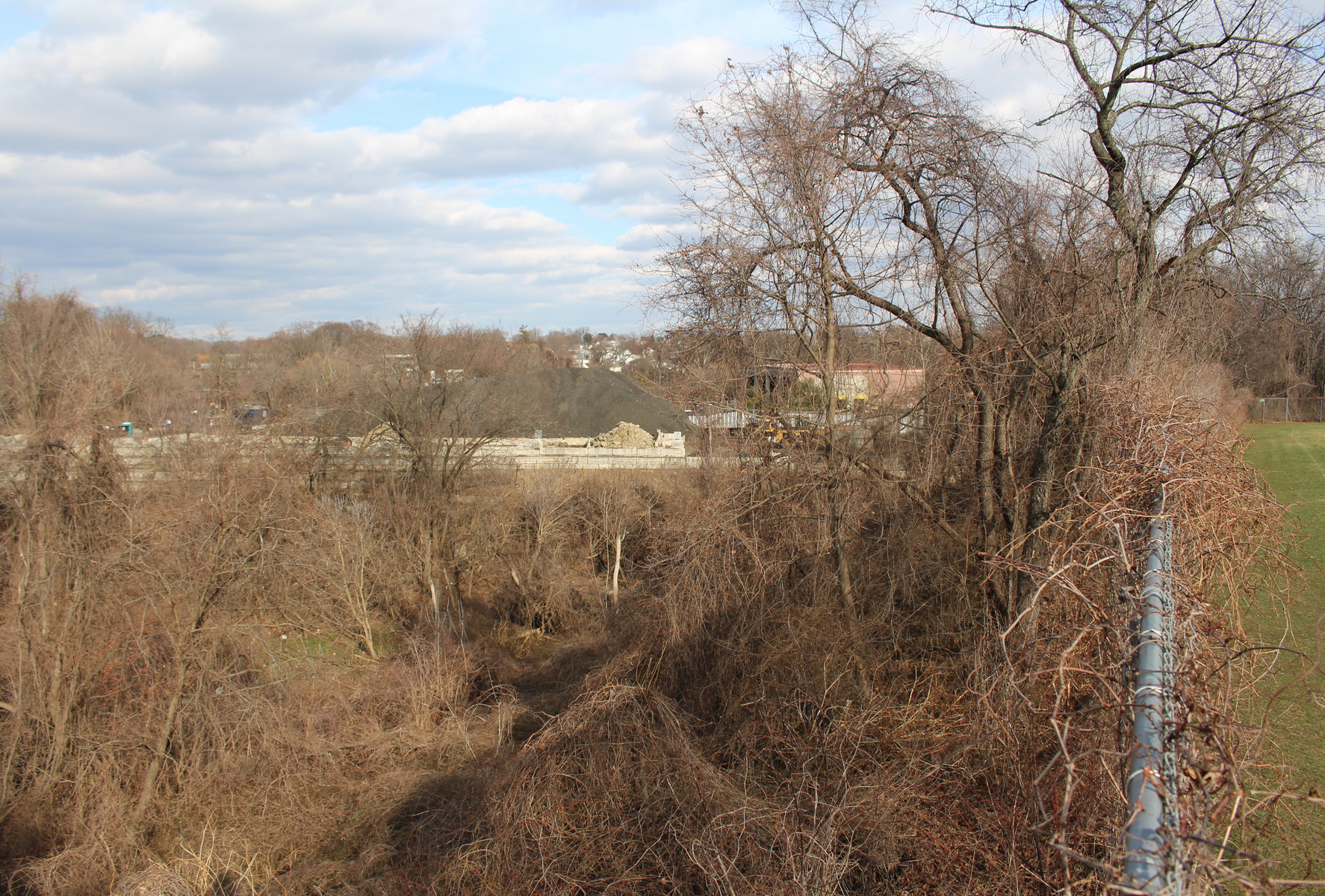 From the field at Western Middle School, a view of Holly Hill Resource Recovery Facility, the site of the former incinerator that burned for decades when residents called the facility “the dump.”

The Town owns the property, but the Board of Education controls it.

Western Middle School is adjacent to the town’s resource recovery facility, where for decades an incinerator burned residential and commercial garbage.

First Selectman Peter Tesei said various town departments – Conservation, Dept of Public Works, Law, Health, Parks & Rec, Board of Education, office of First Selectman, in addition to outside legal counsel and and environmental engineers at AECOM – have collaborated “on a path forward” and that a letter is being drafted to Mike Finkbeiner, who collected the “unauthorized” soil samples indicating elevated levels of lead and arsenic, requesting more details on his sample methodology, boring locations, depth of samples, how sample locations were restored, sample locations, chain of custody, and a complete lab report.

Selectman Marzullo said, “This is no longer a New Lebanon modular issue. It’s a Western Middle School-slash-town issue… We have an obligation to conduct our own tests to dispute their tests, and remediate if something is found.”

“There is a perception out there that we have to combat that there are toxins in that field,” Marzullo said. “How they were obtained is another issue,” he said.

“Shouldn’t we be doing our own tests simultaneously? We have an obligation to conduct our own tests,” Marzullo said. “We have to take control of this now. We shouldn’t be waiting and spending a lot of time trying to verify their tests.”

Mr. Tesei used the example of the public safety complex, saying, “It was tested, as a matter of course because it was known to have been previously had an automotive use, with oil, paints and so forth.”

“They tested and remediated,”Tesei said of the public safety complex on Bruce Place. “That has been a practice long before Greenwich High School emerged on the scene, or other places.”

Tesei said the validity of the tests done by Mike Finkbeiner, a licensed land surveyor, are in question. “It’s up to the project folks to determine whether they necessitate tests. I don’t think we should arbitrarily say we should test, because there’s costs…”

“As I’ve said publicly, there are other agendas at play… It can easily become a discussion on, say, let’s test public property. But you know what? I think your property should be tested – your private property. …We need to think logically and take a step back.”

“The unknowns are not going to be known until testing,” Mr. Marzullo said.

“One thing that the information and the BOE is requesting can provide is if the sampling was done under the turf, as far as exposures go, the turf is an acceptable shield to prevent exposure,” said Michael Long from the Town’s Health Deparment. “That’s one aspect we can look at.”

“We’re relying on an outside source,” Marzullo said. “The town once again has to become proactive. I recommend we begin testing. We know there is arsenic… It’s not good governance how we’re doing this.”

“We don’t have before us the scientific analysis, nor the regulatory requirements …How many milligrams or kilograms is at a risk level… We have to document that so that each of us can talk to our constituents and say what the residential standard is this…. Rather than creating unnecessary hysteria of, ‘Oh we have to get the kids off the fields,'” Tesei said. “We need to know more. We need to work with our professionals so that we can have a more meaningful discussion at subsequent meetings.”

Mr. Marzullo was not swayed. “To get that information we have to test,” he said. “We’re relying on information from someone who took it upon themselves to test.”

“No, we’re not. We’re trying to find out whether that was true,” Selectman Toner said.

“The Board of Education administration is working very collegially with town agencies that are relevant,” Board of Ed chair Laura Erickson said.

“I think the Dept of Health opined on the fields, whether they can remain open. The answer is yes they could because there is turf on the top there. We want to be very prudent. I don’t want to proceed with testing only because this report has come to light. That sets a bad precedent. I want to learn more about the report.” – Board of Ed chairman Laura Erickson

“The building committee took a vote to seek a state modification on the building code so that perhaps the soil would not be disturbed,”  she said. “They’re looking for options and flexibility.”

“They weren’t saying we’re not going to test at some point,” Erickson continued. “Everyone is proceeding prudently and cautiously. The information is not verifiable at this point. Do we want to rush in and test? I think we want to be very careful about the message that sends.”

Mr. Marzullo made a motion that the Selectmen recommend to the Board of Education that they begin testing at Western Middle School immediately.

“In my opinion there would be arsenic found. I think we should be testing now, and not relying on something not substantiated,” he urged.

Neither Mr. Toner nor Mr. Tesei seconded Mr. Marzullo’s motion, and so the motion was not advanced.