On Wednesday morning the architects selected by the New Lebanon Building Committee, Tai Soo Kim, presented four different options** for a new school during an early morning meeting at Havemeyer.

Typically, the building committee meetings don’t draw many spectators, 50 people crowded into the conference room to see what the architects came up with.

Before they got started, there was a short review of surveyor’s findings. Ryszard Szcypek, AIA, principal from Tai Soo Kim Partners, said that a culvert had been discovered in a corner of the New Lebanon property. He said the culvert has a 42″ pipe which is plugged and will be an important topic when they meet with the town engineers. To give credit, Mike Finkbeiner warned the Board of Education and original architects months ago that a stream flows through the property.

Mr. Kim started off by reviewing Option No. 1, which he described as having the biggest Wow Factor. He said building the new school without removing the existing school first is possible and would make everything easier. He said that option 1 would involve building behind the current school. 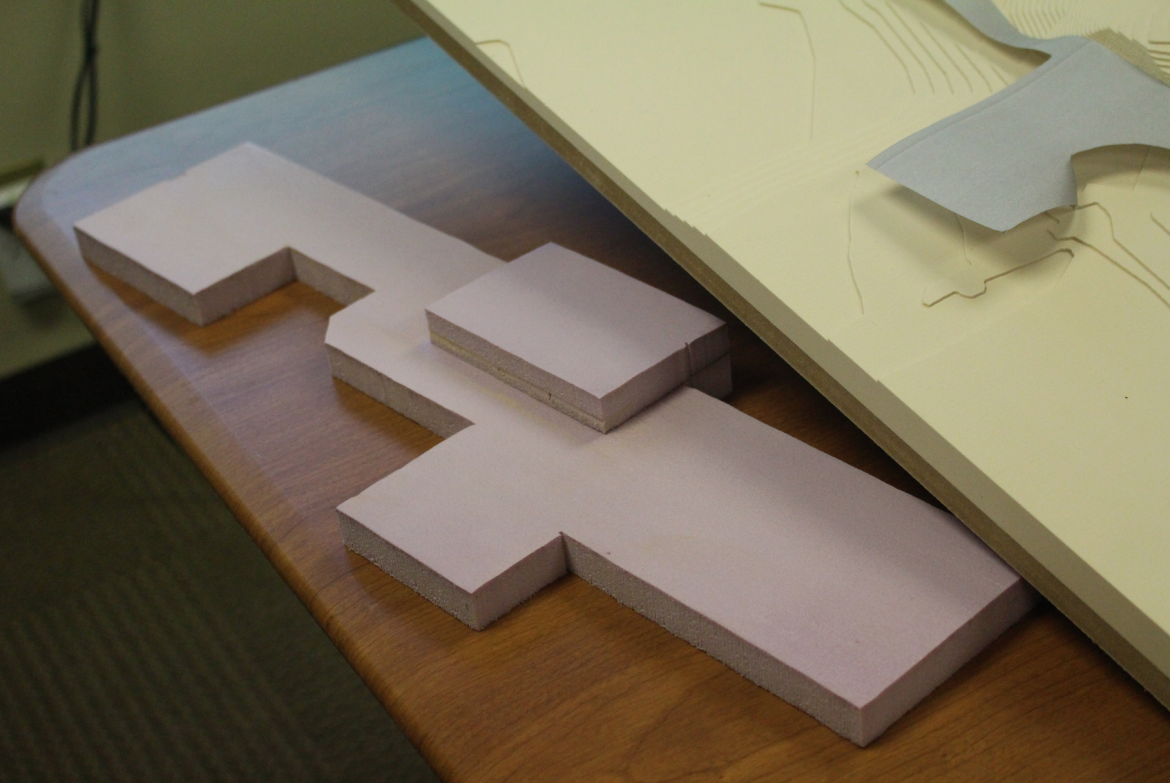 Option 1
Option 1 would arranged so that the administration can view from their offices all activity in the playground, bus circle and parking lot.

The lower level, which he said would not feel like it’s a deep hole because it would have views of level grassy areas, would contain the cafeteria-slash-community center, gymnasium with stage, and music instruction space. Also, the cafeteria would be two stories high and feature a skylight, so that even though it’s on the lower level, it would feel airy. The driveway would have three lanes: a bus lane, passing lane, and a third lane for parents to queue for pick-up.

Under Option 1, once the new building is completed,  the old building would then be demolished, and the idea would be to add foot bridges for access from the building, over the dip in topography, to the bus circle, playground and parking area.

The problem with Option 1 is that it means building in the ravine, a word that was not mentioned on Wednesday morning.

Back in early May the Selectmen, along with architects from Peter Gisolfi Associates, Board of Education members, media and interested residents took a walking tour of the ravine between the existing New Lebanon School and I-95. On May 14 the Board of Selectmen discussed what was being called “Scheme C,” short for building in the ravine. On May 28 they voted unanimously against it. Then, on June 9 the Board of Education held another public hearing, this one for input on Scheme D versus B —  building a new school on the William Street ball field (B) versus building on the existing school site (D). While many spoke in favor of re-using the existing site, a well-organized group of residents turned out to support Scheme B. Building on the existing site (D) was expected to mean relocating New Leb students either to modular classrooms nearby or farming them out to under-enrolled schools in Greenwich.

On June 19 the Board of Selectmen voted to deny MI for Scheme B.

D-Revised
The second option presented by Tai Soo Kim Architects was for ‘D-Revised.” This layout features a portion of the building that is 2 stories high and another portion behind it that is three stories high. This option would involve demolishing the existing building first and relocating children during construction.

The architect said that according to state code, the children in Prep-K and first grade should be on the ground level, along with cafeteria and gymnasium. Then, grades 2-5 could be upstairs and elevators would be integral to the design. The media center would be built over the gymnasium, which is challenging as it’s a heavy, long span, but, he said, “doable.”

Referring several times to D-Revised as “doable” but “challenging” and “tight,” the architect said art and science rooms would also go on the top floor. “You’d have long corridors, it would be double loaded… It would not be cohesive or have a community building feeling.”

Option 2
Option #2, like Revised D builds the school on the upper site but moves away from the two story layout. The media center is at the heart of the building, taking into consideration that New Lebanon offers the International Baccalaureate. “It is an inexpensive way to bridge the slope,” he said. Pre-K and Kindergarten have a separate entrance. From Mead Avenue the building would be visible,  which the architect suggested might make potential magnet students aware of it.

Option 2 would keep all the specials together on the higher level and grades 2-5 on the lower level. The layout would move teacher parking to the lower level to free up space for a bus loop above. Currently two school buses come and go fro the school. The new school, under Option 2 would accommodate four full size buses and s shuttle.

He further broke down Option 2 into A and B, with A involving relocating the children off site, and B, doing a phased construction starting with a 38,000 sq ft building below, moving the children into the lower level when it’s complete, then demolishing the old building and adding the upper level later. However, he said while students would stay on site and not have to be dispersed or moved into modulars, it would add another 12 months to the construction schedule.

In sum, the architects said that for about $32.8 million, Greenwich can build any of the options presented.

The architects pointed out that the last option, #2 B, involves more “rock and earth work.” It would take longer and possibly increase construction costs, and necessitate putting aside more for contingencies.

Then, in December, the architects said they want to go forward and meet with teachers and administrators for their feedback. “So far we’ve just worked from the ed specs,” the architect said. “Then after the first of 2016, we want feedback from the parents and neighbors in a public forum. We don’t want to make any promises but will take those comments into account.”