New Lebanon School’s tiny gym was packed but the tone was polite for Monday’s public hearing.  However, at the outset the Superintendent seemed to anticipate dissent.

McKersie reminded the audience of roughly 200 that it’s still early days and the plans are only in the conceptual stage.

Ben Branyan, School Dir. of Operations, listed a multitude of hurdles ahead, suggesting it’s too early to pass judgement. Yet the crowd was not angry. No pitchforks materialized.

McKersie said the architects, Peter Gisolfi Associates, had come up with new options and the crowd listened attentively.

The move for a new school stems from New Lebanon’s chronic overcrowding, but there is also the nagging issue of racial imbalance. The school’s heavy minority population, in this case, far more Hispanic students compared to other parts of town, which has triggered a warning from the state.

Connecticut imposes a formula that determines a school is racially imbalanced when its minority enrollment deviates more or less than 25% from the Town’s minority population overall.  At a small school, just a few minority students added or subtracted can throw a school into non-compliance — or compliance.

A new scheme, “Scheme C” was well received, but the elephant in the room may have been the idea of redistricting and embracing diversity that could have solved the problem. Back this summer at the BNA meeting Barbara Riccio said as much. (New Lebanon Principal on Racial Balance, Crowding, Out-of-State Cars)

And while enrollment has plummeted up at Parkway School, which could accommodate many more students, a new state-of-the-art New Leb with its IB magnet theme may magnet in more students and balance the backgrounds of the students within the building. And, in the process make the project eligible for diversity grants with up to an 80% reimbursement.”

The existing New Lebanon School is a mere 37,000 sq ft and an enrollment of 262. The current kindergarten is being housed offsite at the BANC and professional staff are working out of former closets. The space is just too small.

The architects said the ideal program for the new New Leb school would be 62,000 sq ft. 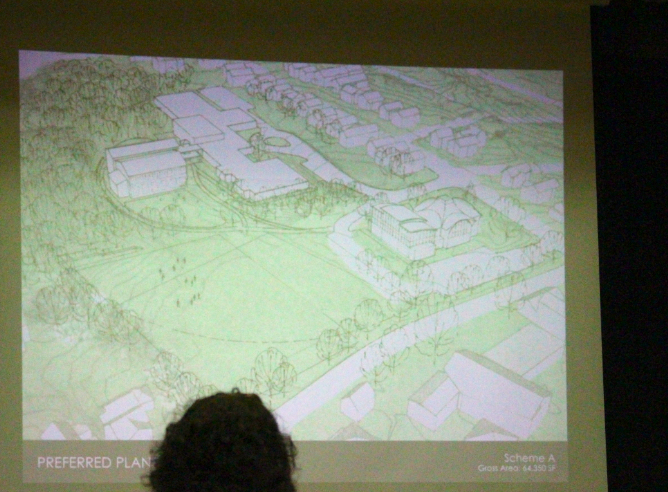 One of the renderings architects used to illustrate Schemes A through C for New Lebanon School. Credit: Leslie Yager 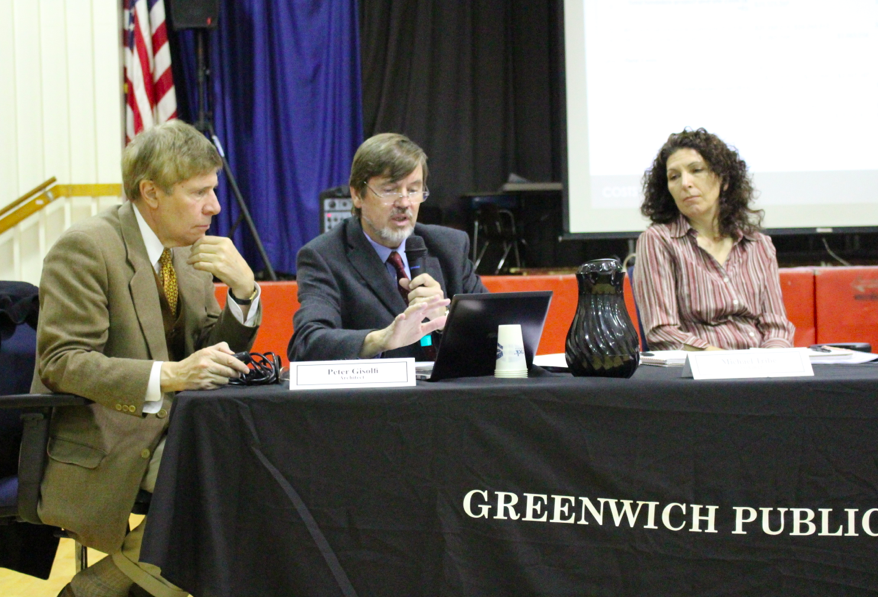 Scheme A would mean adding on to the existing building and leave it in operation as the major portion of the school. According to the architects, that would involve doing the work over two or three consecutive summers.

Scheme B featured a freestanding new school. The architects described the new building as “a courtyard building” which would be adjacent to the library.

C Scheme was a new alternative that incorporated previous input from the community. Similar to Scheme B, but the new building would be located to the south of the playing field. 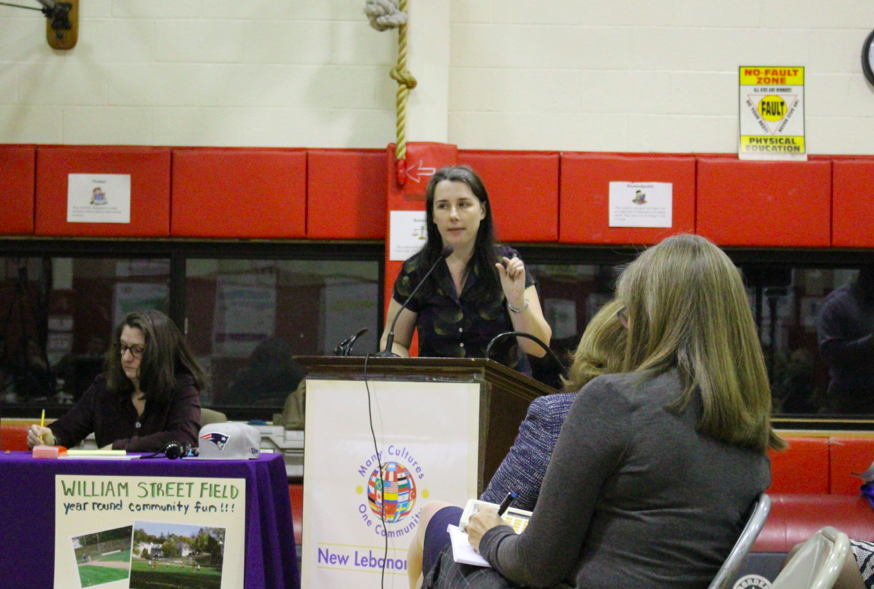 New Leb mom who worked on the feasibility study team this summer, Clare Kilgallen, said the main reason the school’s space would be increased from 37,000 sq ft to 62,000 sq ft has less to do with accommodating magnet students, which she described as “the smallest slice” of the space, than making the creating common spaces that are adequately sized.

She said the school is being built for 420 seats, not 470 seats, she said, dispelling an apparent rumor.

Kilgallen described the media center as too small, the computer room as too small. She said closets are being used for instructional space. She pointed to the stage at the foot of the under-sized gymnasium that had been used earlier in the day for dental health. “The biggest issue here is the common spaces, which all studies show are undersized,” she said.

Kilgallen said that in Dec. 1956, the Teagle family deeded to the Town the land next to the school for school, educational and playground purposes. Of the entire 7.5 acres gifted, New Lebanon school only uses 2.7 acres for the current building, parking and playground.

Kilgallen pointed out that New Lebanon School is the only school in town without a playing field. The students have limited space at recess and no real athletic fields for their PE program.

“The move to the adjacent ravine provides for a larger multi-use field, and an additional second field if we want it, where the playground is,” Kilgallen said. “It’s actually the option with the most parking. It has no chance of displacing students. I’m glad to hear everyone is in support of it.” – Clare Kilgallen

Eric Maurer, a New Leb father of two, described new construction as in everybody’s interest, but preferred Scheme B.

“Getting extra magnet seats means getting 80% matching funds from the State is in our interest. So we need to build a school that’s big enough. And putting a good faith effort into building such a great school that people want to come here, not just as magnet students, but for families to move to Byram,” Maurer said, though he said he didn’t necessarily like the idea of locating a new building “hidden” in the ravine, and preferred a new building visible “as a centerpiece for the town,” he urged everyone to come together, move forward and not delay. “If we’re divisive now, we’re not going to be able to move forward and even discuss where the building is because it won’t get built.”

Others who had embraced Scheme B, embraced Scheme C by the end of the architects’ presentation. Tracy McKenna, for example, whose children graduated from New Leb, said she initially favored Scheme B because she liked the idea of increasing the street presence of the school within the community as with Cos Cob School and Old Greenwich school, but said she would support Scheme C. 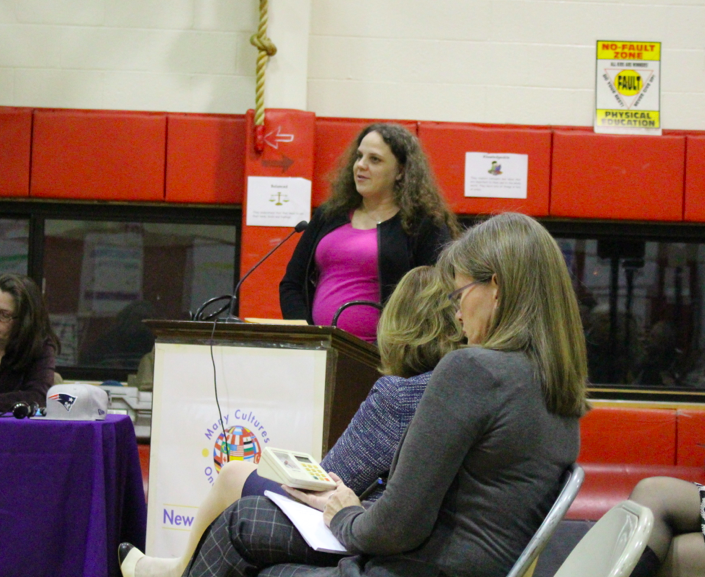 The first speaker at Monday’s public hearing which allotted a three-minute maximum per person, was Nicole O’Connor of Oxer Place who read aloud a petition signed by 553 residents of Byram. Credit: Leslie Yager

Nicole O’Connor read a petition signed by 553 residents of Byram, which was collected prior to the architects presentation of Scheme C, that would not jeopardize the open multi-use field, referred to as the Town Green by many.

Text of the petition:

“The children of Byram deserve a new school enabling them to reach their highest potential. The residents of Byram and all over Greenwich natural deserve open space where they can gather to gather, play, celebrate and connect.

The Byram village green on William St in the heart of Byram is a natural space where any time of day you might see Little Leaguers fielding a hit, parents and children fielding a pick-up game of soccer, dog owners giving fluffy some fresh air, or a simple picnic in the grass.

We must not have to  decide between having a Village Green and having a new school. Byram needs both.” Text of Petition signed by 553 Byram residents 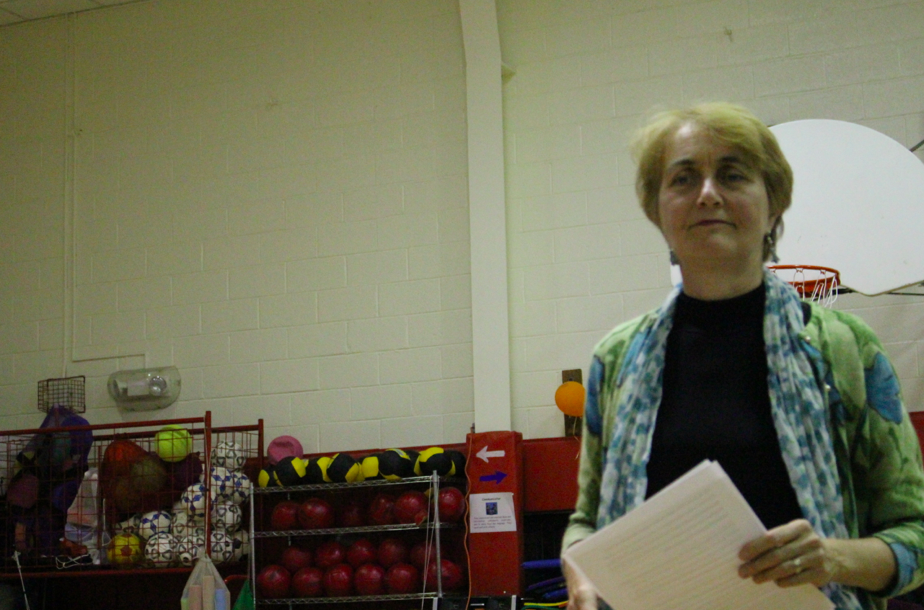 Patricia Biardi Kantorski, a local architect, described Byram as a cohesive, walking community established around the turn of the century by working class immigrants who came to work in foundries, factories, quarries and mills that lined the waterfront. She said little has changed but the origin of immigrants. Credit: Leslie YagerPatricia Biardi Kantorski, who lives a block from the school put the project in context of history. The site includes a school, playing field, library and woods, with four distinctly different environments: a hill where the present school sits, dense old-growth woods with a ravine behind the field, and an open playing field adjacent to residences.

Patricia Biaiardi Kantorski, an architect who lives a block from New Leb,noted the school is adjacent to the fire station, church, and Veterans Club.

“While the site is located within a dense residential and commercial area, it has a wonderful feeling of being open, safe an inviting,” Biardi said.

She described the school as safely tucked away from the busy street, and described the playing field as appropriately sited where anyone using it can be safely seen. Lastly, she said the woods provide a buffer from the noise and pollution of I-95. 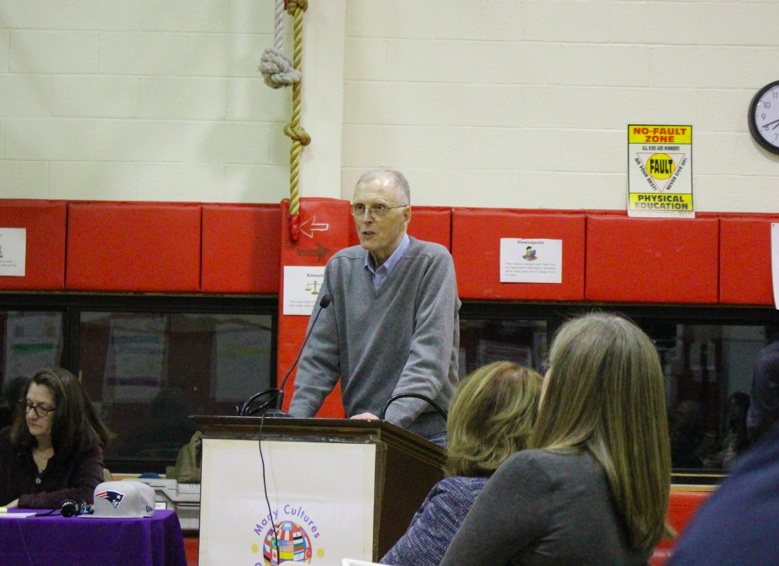 Bob Tuthill, the sold RTM member who was on the feasibility team over the summer. Credit: Leslie Yager

Bob Tuthill of Byram, the sole RTM member of the feasibility study, described himself as crazy about Scheme C, but urged the architects to rotate the building in the ravine so that it face the playing field.

“That’s the beauty. Swing it around slightly. You still have the open field. It’s still secure for them to play when school is not in session,” Tuthill said. 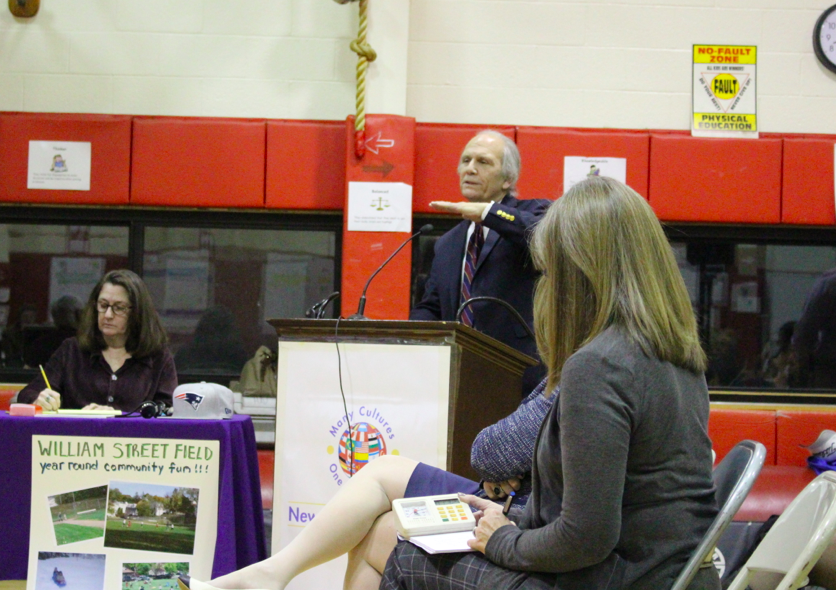 “The problem with Townies is that they have a memory,” said Chris Von Keyserling, lamenting the day the Town closed Byram School. “The reason they closed Byram School instead of smaller, and less functional New Leb was the Town was greedy and didn’t want to lose the land that New Lebanon sat on because of the deed give back. The problem with closing Byram School was that it led to decades of  redistricting fights through town, because their wasn’t the capacity to shuttle kids back and forth over the boundary lines.”

“I’m in favor of Byram getting what it should have gotten a long time ago.” Chris Von Keyserling

“I think a larger New Leb school is an appropriate redress of the shortsightedness of 30 years ago. It gives much more opportunity to be able to maneuver our populations as they wax and wane. It also gives Byram what it has long deserved and hot had, which is a full sized proper functioning school structure and grounds.”

A group of about a dozen Spanish speaking parents sat together, listened eagerly to the presentation and public comments through the assistance of an interpreter. One parent addressed the Board members and audience, likewise through an interpreter, to voice the Latino community’s fondness for the school, which she described with a list of superlatives.

“I want to thank you for turning this into a very positive place,” McKersie concluded before adjourning the session.