The Town is considering whether to acquire the three cemeteries which have no deed history.

Testifying at the hearing was Teresa Vega, who was recently interviewed by Greenwich Free Press. (Cousins who met through Ancestry.com Want Historic Black Cemetery in Byram Protected, Preserved and Interpreted)

Vega said her 4th great grandmother, Peg, had family ties with her owners and maintained a relationship with them even after being emancipated.

“The original intent of our ancestors was to give these people a final resting place for their slaves and ex slaves, where they could rest in peace for eternity, undisturbed. If anybody deserved to rest in peace, it is those people who spent part or all of their lives slaving away. And I literally mean, slaving away.” – Teresa Vega, Lyon family descendant

Ms. Vega said was thrilled that the Town commissioned the documentary study of the African-American cemetery. “I want people to know there is a long history of African-Americans this town,” she said.

When he had his turn at the podium, the Stewarts’ attorney, Philip Russell said his clients were not opposed to designating the areas as a cemetery. “They are not here to offend anyone,” said Mr. Russell. Mr. Russell said that the Stuarts bought the property adjacent too the African American Cemetery in 2013 and set about building a house to move into.

“During that construction they placed some fill onto the designated plot,” he said, adding that subsequently the Stewarts received a verbal and then a formal cease and desist order.

Russell claimed that the Stewarts did not encroach or excavate, other than place some fill on the adjacent property. Further, he said the Stuarts only learned about the public hearing last Friday when they were approached by a reporter.

Russell read aloud a letter the Stewarts had received from Chris Antonik, now deceased, who lived at 37 Byram Shore Drive.

In his letter, Mr. Antonik said that a previous owner had excavated much of “what is being called an African-American burial ground.”

“Such a colored cemetery has not existed during my residency and there have never been any cemetery markers of any kind on the property. …This property has always served as a side yard of the residents of 11 Byram Dock Street,” Antonik wrote in his letter to the Stewarts.

“In 2006 the house was purchased by a developer and rebuilt. During construction the side yard was excavated,” Antonik wrote, adding that when the previous owner excavated, the only thing he had witnessed being removed were old clay septic tiles.

Mr. Russell said that after receiving the cease and desist order, Jeffrey and Andrea Stewart hired an engineer to do an underground radar test and found no evidence of remains or underground tombs.

“There’s a line drawing, which appears for the first time in land records in about 1890. This is for a cemetery plot that as discontinued and went into disuse around 1800. Was this the exact place where this cemetery occurred?” Mr. Russell asked. “There is no physical corroboration of an established fact this was and is a historic cemetery.” 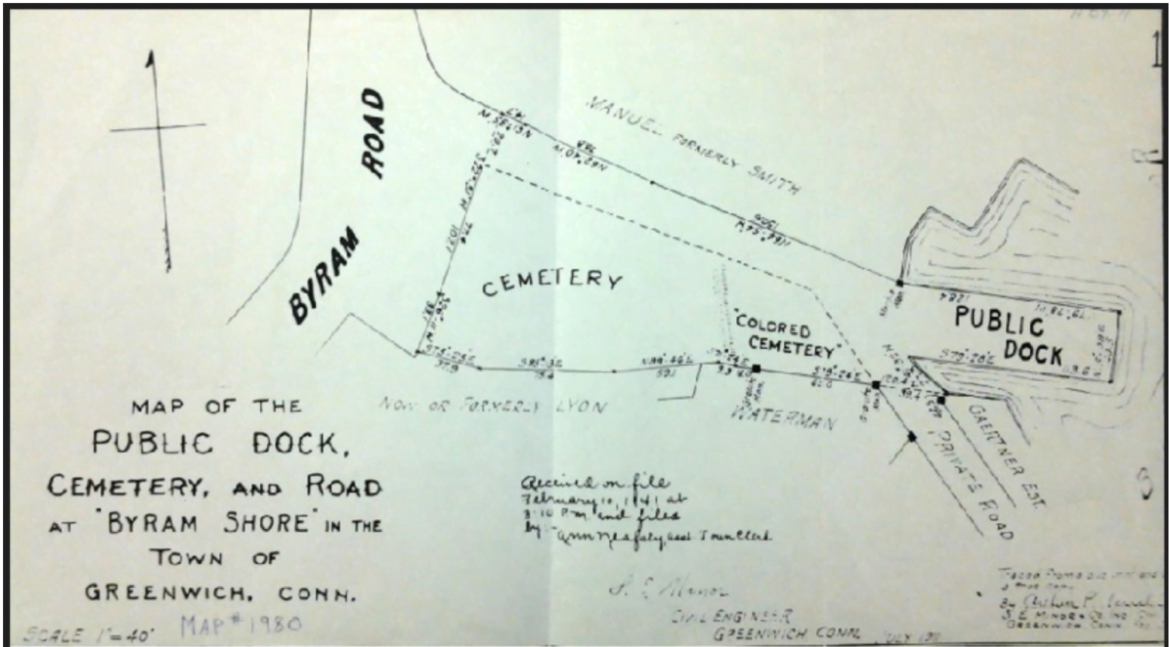 Historic map of Byram features a public dock, a Cemetery and a “Colored Cemetery.”

Mr. Russell said that after the cease and desist order, Mr. Stewart had been interviewed by Greenwich Police seeking to determine whether he had done anything criminal. “And that’s about the end of it,” he said, adding that it was premature for the town to acquire the property.

“There is no harm in the status quo,” he said, going on to suggest that archaeological testing and research could be conducted without the town acquiring the property.

“There is no real evidence either that there was one here, or if there was one there, that this is it.” – Philip Russell, attorney for owners of 11 Byram Dock Street

Furthermore, Mr. Russell said that his client had purchased their property “without knowing there would be a memorial constructed there.”

Chris Antonik’s widow Carolyn attended the meeting alongside Debbie Piper  and Laureen Taylor, who gave her current address as 302 Delavan Ave. Ms Taylor, who approached the podium with her cousin, gave a lengthy history of her Greenwich ancestors and offered to take ownership of the Lyon Cemetery.

“I have been there with clean up and erected fences and I was able to hire a reputable company to do some cleaning of selected headstones to correct a blemish on the headstone Chris (Mr. Antonik) had created while attempting to clean the headstones.”

Conservation Commission director, Denise Savageau said that being a descendant of someone buried in  cemetery does not mean they “own it,” but rather that they are stakeholders or interested parties.

Ms Taylor said the desecration of the African-American cemetery hadn’t been properly handled by the town and that it should have been documented as a formal violation in land use records and should have a police report.

Mr. Tesei asked Mr. Russell whether he had addressed his questions to the Town’s Conservation Commission, Land Use or Town Attorney. “No,” Mr. Russell replied.

Mr. Russell argued that the “so called African-American cemetery” is a separate plot from the Byram Cemetery and the Lyon Cemetery.

Ms Savageau disagreed. She said the Lyon Cemetery was a separate parcel, but land records list the ‘colored cemetery” and the Byram Cemetery as a single plot.

During the meeting, the purpose of the hearing was only to take comments, and not a moment for the Selectmen to vote. The next step in the process is for anyone disputing the ownership or claiming ownership of the cemetery to come forward.

Of the Stewarts, Savageau said, “They are aware of the (Historic Perspectives documentary study) and that the town is moving forward in the acquisition process.” She said the public hearing was held to comply with a state statute.

Acknowledging Mr. Russell’s claim that the Stewarts hadn’t learned about the public hearing until contacted by a reporter just days earlier, Eric Brower of Greenwich Preservation Trust said the hearing was preceded by three legal notices in Greenwich Time.

Also, he said, Mr. Stewart had purchased his property and approved site plan that included the adjacent property. He described the underground radar report as “clearly a trespass.”

Cece Saunders of Historical Perspectives, Inc, who was commissioned to write a report on the historic cemeteries, took the microphone.

“I have been in some terrible situations where cemeteries had been damaged, bulldozed, abandoned and dynamited,” Saunders said. “I’m so grateful to be working on this project where the damage was stopped in the very beginning and that the Town is interested in doing the right thing.”

Anne Young, staff member with the Historic District Commission, said September was Freedom Trail Month and the Town’s moving forward with acquiring the cemetery would be “a very symbolic move.”

“There is a wonderful opportunity for the town,” Young said.  “I ask you the Board of Selectmen to endorse this acquisition. This is nothing new. The Town of Greenwich has cemeteries under its ownership for 60 or 70 years.”

Jo Conboy of the Greenwich Preservation Trust also urged the Selectmen to move the acquisition process forward. “These are hallowed grounds and we have an obligation to do that,” she said. “As per the recommendation of the Historic Perspectives study, any fencing or preservation plan should be created in consultation with Dr. Brian Jones, a Connecticut state archaeologist with input from local historic preservation groups, particularly the Greenwich Preservation Trust.”

Carolyn Antonik – Passing on the Love for Byram’s Beautiful Cemeteries