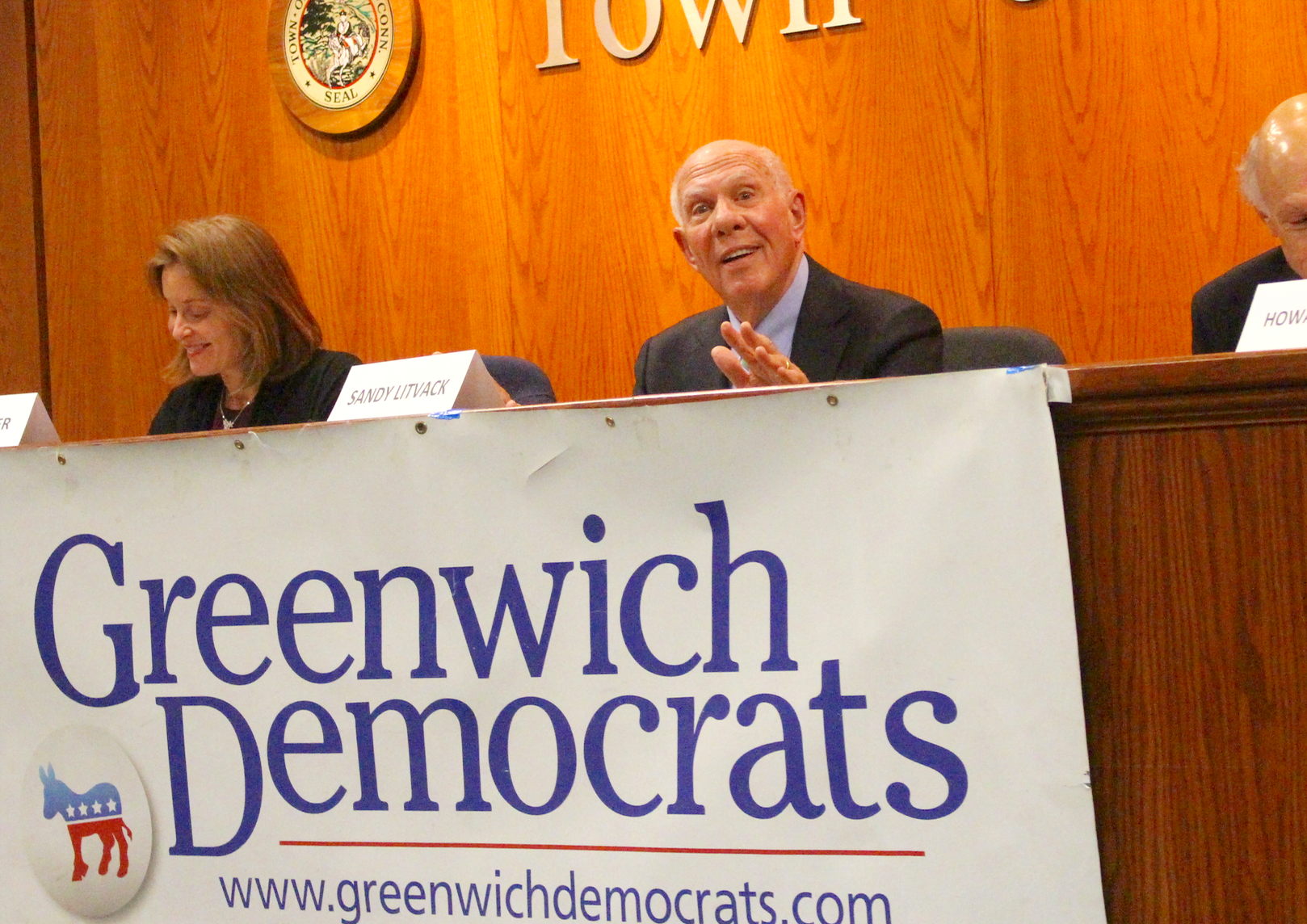 Greenwich Democrats held a forum at town hall on Monday night featuring what Sandy Litvack called “the team,” including the candidates for Tax Collector, Board of Education, and Board of Estimate & Taxation.

At the outset, Mr. Litvack, candidate for First Selectman, said he organized the forum because First Selectman Peter Tesei (R) would not agree to another debate. “He was offered eight dates and then I offered him any date to debate,” Litvack said.

Litvack outlined three differences voters would see in a year’s time should he be elected, beginning with educational charter change.

“The current First Selectman is supporting that. I am totally opposed to it,” he said. “Our BOE has been politically balanced for 80 years, and as a result it is bi-partisan.”

“They want to make it 5 to 3, and politically unbalanced. …I personally wouldn’t care if it were 5 Democrats and 3 Republicans, but it’s is a bad idea to put politics into education. It’s a prescription for disaster.”

Litvack drew a round of applause from the crowd of about 100 when he vowed, “If I’m elected, charter change will not occur.”

Litvack said because of the state’s financial crisis, Greenwich must be managed differently.

He said a proposal coming out of the budget oversight committee from the RTM to cut the town budget by 10% to 15% over the next 5 years “is unthinkable.” He said that would involve cutting the education budget, which he said would be “cutting into the bone”

“You cannot cut your way to prosperity!” Litvack said, adding that if serious cuts are made, Greenwich will become like Stamford.  “People don’t just move here for a low mill rate.”

“No one markets better than Disney,” he said, referring to his position as COO and Vice Chair of Disney. “Ours is not a marketing problem.”

“We can’t rely on the hedge funds any more,” Litvack continued, suggesting the town seek to attract businesses in industries that would employ millenials such as tech, media or animation.

Litvack drew applause when he talked about changing the “tone” of the town.

“Tone is set from the top. It takes leadership,” he said. “You start in DC with a tone most of us don’t like. It’s seeped into Greenwich in 2017. When someone has a petition trying to get onto the Board of Education and is followed around and harassed, and someone uses their kids of 8 or 9 to walk around chiding the person – that’s not civility. That’s a discourse I won’t tolerate.”

Litvack criticized the Republicans’ election motto of “Greenwich First,” which he said has echoes of the 1930s. “If you’re tone deaf to that and want to put it aside, I say, what does it mean? I suggest it means, ‘Me First,’ ‘My Kid First,’ ‘My Needs First.”

Litvack asked why the First Selectman hadn’t spoken out against Christopher Fountain’s directive to his readers not to vote for women petition candidates for RTM.

“When just this weekend, I read about somebody suggesting that nobody vote for women for the RTM, I say to myself, ‘What is happening?’ ‘Where is the First Selectman?’ …When leaders stand up, it changes the tone in this town.”

Litvack said as First Selectman he would have spoken out, and despite people pointing out that Donald Trump is not on the ballot, he said the ability to speak out against unacceptable behaviors is part of the tone the First Selectman sets.

“Where you stand on Donald Trump tells me who you are: what your values are, what you believe, how you made decisions and how you talk,” Litvack said. “I think Donald Trump is an embarrassment and has debased the office. I call on our First Selectmen: Where do you stand?”

During Q&A, Anthony Lopez asked what Mr. Litvack would do to improve public housing in Greenwich, referring to the persistent presence of cockroaches and mold.

“I have been criticized by those who walk around with their eyes closed,” Litvack replied. “I walked around Armstrong Court. I saw apartments – I saw the water. I saw the roaches. You going to believe them or lying eyes? I know what I saw.”

Litvack said the problem with housing is not limited to Armstrong Court.

“Because we’ve had no housing plan, we’re subject to being hijacked by developers who know they have the upper hand. This is because we sat and let it happen. I’d bring a resolve to attack the problem, to admit when there is a problem,” he said.

During Q&A, Steve Bruce brought up the weekend pleas from the blogger who discouraged his readers from voting for women petition RTM candidates.

“I hope everyone takes notice how offensive it is someone would go out of their way to suggest the women petitioners running are unfit,” Mr. Bruce said. “I hope everyone will use this as a point to rally around. That’s not what this town is about. Everyone should be appalled at the suggestion we should not vote for women.”

Who is the bully? And, are RTM contests pitting men against women?