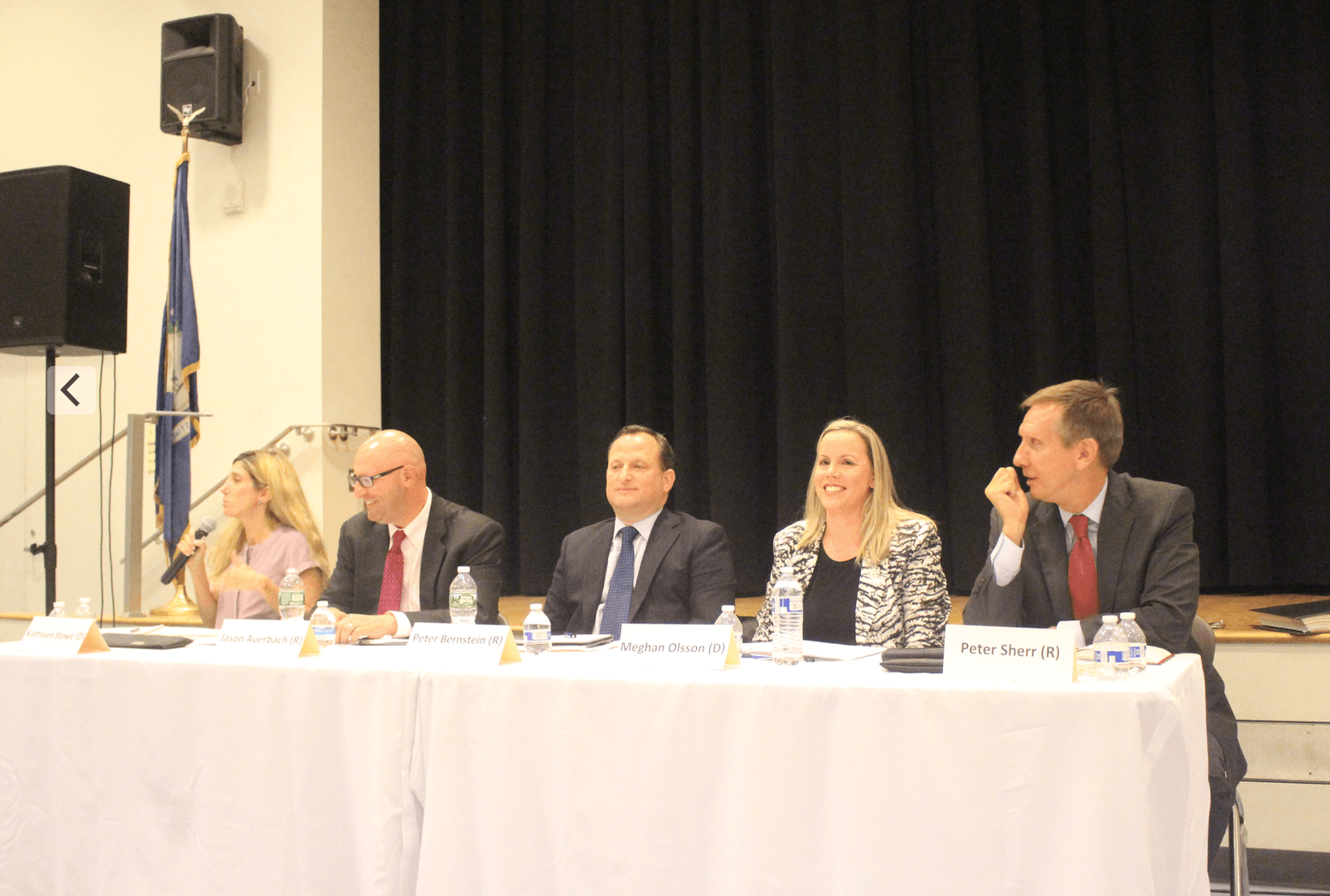 The modest cafeteria/auditorium where about 70 turned out for the event was a more intimate setting.

Peter Sherr, who is seeking a third term, and newcomer Jason Auerbach both repeatedly took incumbent Peter Bernstein to task. The three men are vying for two spots on the board.

There was discussion about a new New Lebanon School, possible forced redistricting, and racial balance. The three Republicans clashed repeatedly.

Mr. Auerbach praised Peter Sherr for recently asking what happens if a $23 million grant from the state doesn’t materialize, but chastised the board as a whole for not developing a contingency plan.

After saying he supports a new school, Auerbach lambasted its context within a plan for racial balance.

Auerbach said the school, as proposed, is 64% bigger than the existing structure. “That is wonderful if the state gives us the $23 million. …I am not prepared to make a $23 million bet for Greenwich tax payers. We will deliver a new New Lebanon in a fiscally responsible way.”

Mr. Bernstein, who said the racial balance law is flawed, argued that the building, as proposed, is needed by the town and that the state grant is still possible.

Bernstein, who serves on the New Lebanon building committee, said the contingency plan, “plan B,” would be the state forcing redistricting and busing on Greenwich, as is happening nearby in Fairfield, where they are paying $93,000 for each “yellow limousine.”

“We’re building the building we need, regardless of the racial balance plan. We need three classrooms per grade, we need common space adequate to the size of the school. It is the standard that was used when we built Glenville School,” he said. “Why should we have a different standard for New Lebanon School?”

Auerbach said the building committee was instructed to build based on an 80% reimbursement from the state and that the proposed 21 classroom school was not fiscally responsible.

“There is no bond here and no additional tax. The money is set aside. We have the money to do this. We are waiting on the state on whether we get the grant. That’s it. End of story. Greenwich has the money,” Bernstein said.

Mr. Sherr expressed concern the new school was outsized. He said currently New Lebanon has 260 students and the proposed building is sized for a maximum of 475 students. “That’s the size of Riverside School,” he said.

Ms. Stowe said the proposed building is well-sized considering 70 students in the district have been forced to go elsewhere due to overcrowding. Also she said projections are for growth, and that 50 magnet seats will attract more children to the school.

Ms. Olsson, a tenured teacher at Mamaroneck High School, said she was chagrined to see the overcrowded conditions at New Lebanon, particularly kindergartners being taught across the street in a windowless classroom and students playing soccer on giant rocks at New Lebanon School because their field is not usable.

Olsson said the new school was necessary because pre-school was taken away six years ago due to overcrowding. Noting the achievement gap, she said the neighborhood that would benefit from returning pre-school to the new building. She said the poster in the lobby at New Lebanon with a picture of the new school saying ‘Coming Soon’ had been up so long that it faded and was removed.

Ms Stowe said she was confident the state will come through. “We can build it. We’re Greenwich. It’ll only become more expensive if we delay it.”

Mr. Sherr said he was personally offended by the racial balance law, which he described as officious. The problem we’ve created is we’ve mixed up the needs of the local neighborhood with the racial balance plan. “We shouldn’t have done that.”

Mr. Sherr said that by attaching the project to the state, five years have passed and students are still in their outmoded building. “I pray every day that it gets passed because it’s the only plan the Board of Education has developed to get a new school for New Lebanon.”

On the possibility of state compelled redistricting and transporting children to other schools, all candidates said they opposed “busing,” though no one brought up the fact that there are under enrolled schools.

Mr. Sherr said he opposed redistricting and previously opposed six board members who pushed a plan “to essentially bus between 500 and 1,000 kids across the district. They were going to do it on a voluntary basis, but it was busing nonetheless.”

“If we don’t get the school at New Lebanon, I think it’s time to say good bye to the state. Let them come to us aggressively on the state law. We have been advised as a board by attorneys that the state law is probably unconstitutional. I think we should let the challenge happen and find out if that’s true.” – Peter Sherr

Achievement Gap and Class Size
On achievement gap, Mr Bernstein agreed that small class sizes drive achievement, not just in Title 1 schools, but in all schools. Bernstein, whose children attended Title 1 magnet schools Ham Ave and Julian Curtiss, said smaller class sizes were part of Ham Ave’s original magnet plan for K and and Grade 1, and the classrooms were built for smaller populations.

“I know because when my children went there, there were more children in class than there were cubby spaces,” he said about the smaller class sizes that were promised. “Give me a magic wand and a big pot of money. …That’s impossible, so we’re looking at other alternatives such as personalized learning and digital learning, and working with kids on mastery so that every student’s achievement can be raised.”

Mr. Auerbach said educational equity means students should all have have smaller class sizes. He argued that children at the bottom 20% get more than their share of resources, and that students in the middle are getting lost.

“Mr. Bernstein seems to be promoting a two-tiered educational system,” Auerbach said. “So you’re going to personalize learning at some schools? I support smaller class sizes across the district.”

Mr. Sherr said he fought hard against the past two superintendents who resisted the idea of smaller class size.

“I think it should be the standard across the whole district. I don’t believe in special rules for individual schools,” Sherr said, though had acknowledged that smaller class sizes were offered to encourage people to attend Hamilton Avenue magnet school. “I think the rest of the district should have what Hamilton Avenue has.”

“Mr. Sherr, in my four years on the board with you, I’ve never heard you make a single motion about class size,” Mr. Bernstein said, adding that Mr. Auerbach had been a proponent of a motion in the RTM to cut money from the budget specifically to take money away….” Mr. Bernstein was cut off by the moderator.

Ms. Olsson said there was a disparity between the schools which she described as a “vast inequity.”

“Students have different needs. Not class. Not race. Not income. I do not believe in a two tiered education system. …Our progress has regressed over the years,” Auerbach said during rebuttal. “If I’m a parent in this school I’d be mad as hell.”

Fields and Buildings
Mr. Auerbach said that two weeks earlier he came to Hamilton Avenue School and received “enthusiastic support” from parents for his plan to improve the school’s field.

“For ten years, Hamilton Avenue has had a hill. Go to any other school and they have a field,” he said.

Auerbach said that on the RTM he had come up with a plan that would cost $475,000 to improve the Hamilton Avenue School’s field, rather than $1Million.

“We have to think about remediation,” Auerbach said. “In some cases you can cap it and put on astroturf, and in other cases you can build up,” he added, referring to his suggestion the previous night that top soil go over the existing field rather than remediating.

Mr. Bernstein said he’d been advocating for fixing the Hamilton Avenue School field for many years. “We welcome the input. Thank you,” he said in response to Mr. Auerbach. “We’ve been working on this for more than two weeks. …I completely support redoing the field here. I’m one of the people who brought the motion to the floor last year, and the BET asked us for another plan. We’ve asked the administration to come back to the board with another plan.”

Ms. Olsson noted that three of the four fields with issues are in western Greenwich. “It’s unacceptable. We need to do not just what’s fiscally responsible, we need to do what’s right.”

Mr. Sherr said it was important to keep up existing buildings before building new ones, and that he had resisted people who wanted MISA (Music Instructional Space and Auditorium) for $45 million.

“Here is the deal that nobody likes to talk about. A deal was cut with BET to cut capital maintenance for 20% for 5 years. We’re now paying the price for that,” he said.

“Everybody likes to wave the flag, but if we’re not taking care of buildings that we have – the people at Hamilton Avenue know what happens when you don’t take care of a building. Does anybody remember the mold? I do! It was horrible. We need to make sure we don’t make those kind of mistakes,” Sherr said.

“It’s great to run around and talk about how you grandstanded and stomped your feet, went after and supported a $1Million proposal that will never see the light of day in the BET or the RTM. That’s not leadership,” he added.

Ms. Olsson said the Hamilton Avenue field is a need, not a want. “We had a forum last night in a new beautifully constructed auditorium,” she said, adding that some would argue whether MISA was a need or a want, versus an adequate playing field.

Mr. Sherr said sports facilities and fields are under invested in, particularly at Greenwich High School.

“We need to encourage the superintendent to re-look at the agreement between the Board of Education and Parks & Rec dept,” Sherr said. “They do a good job. They could do a better job. That needs to be a focus on the next two to four years.”

Moderator Jara Burnett offered candidates each an opportunity for closing comments and Mr. Sherr, who went last, offered a zinger for the last word.

Returning to the theme of collegiality that surfaced at both debates, he said the board would have been more collegial if one member hadn’t taken the other to court.

Sherr’s remark was a reference to Mr. Bernstein filing an injunction this July against him and Mr. Auerbach for allegedly intervening and interrupting as he and his volunteers visited public places including the dump, Tod’s Point beach, and train stations seeking signatures from registered Republicans to earn a place on the November ballot.

Ultimately, Judge Edward Karazin ruled that Mr. Bernstein had not proven he suffered irreparable harm and would therefore not be granted an extension of time for collecting signatures.  Still, the attorney for defendants, Tom Cassone, referred to his clients’ behavior as obnoxious several times. In the end, Mr. Bernstein received about 1,000 signatures on his petition, far beyond the 637 required and will appear on the ballot, facing the two RTC endorsed candidates, Sherr and Auerbach.