Updated at noon, Oct 20 to include response from Stephen Walko.

It’s been bruising campaign season in which three Republicans, all public school fathers, are vying for two slots on the Board of Education. This summer, the  Republican Town Committee endorsed two candidates, incumbent Peter Sherr and newcomer Jason Auerbach. A third, incumbent Peter Bernstein, petitioned his way onto the ballot. 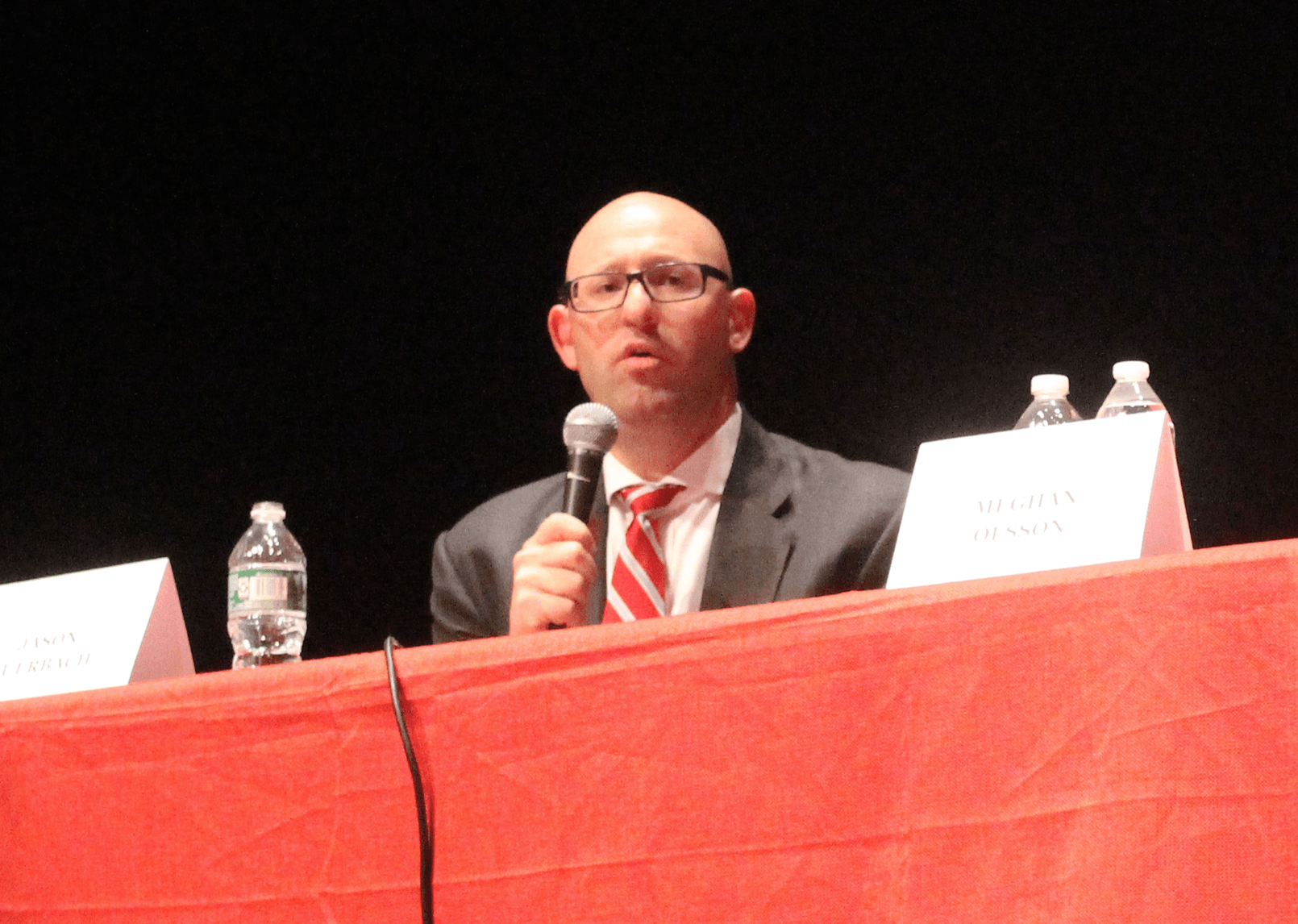 Jason Auerbach at the first debate among Board of Education candidates, held at Greenwich High School.

During last week’s BOE debates, there was much talk during debates about being “collegial.”

He alleged that after he was terminated, he was owed various forms of bonus compensation and expenses amounting to hundreds of thousands of dollars.

The heart of the case is that there were certain commissions that he would be entitled to after he left their employment, and still others that he would be entitled to only of the termination of his employment was not for cause. He was fired. He sued for all the overrides. Wells Fargo said he was fired for cause. Since there was a dispute, Wells Fargo held back everything. The United States Federal District Court found that he was properly fired for cause by Wells Fargo.

The small sum the court found Auerbach was entitled to was for only the commissions earned and reimbursement of expenses even though he was fired for cause.

According to the court record, Auerbach’s former supervisor Edward Thomas, and an employee relations consultant, Julie Miller, testified that Auerbach’s behavior had “created and perpetuated an unhealthy work environment.”

During Thomas and Miller’s investigation, Auerbach was placed on administrative leave. In sworn statements, Thomas and Miller said they interviewed 17 employees, and reviewed emails and other documents related to the allegations.

In a sworn statement, “Miller explained that various interviewees complained that Auerbach favored certain employees, treated employees inequitably, yelled at employees, and threatened not to give employees certain opportunities.”

Ms Miller recommended to Mr. Thomas that Auerbach be terminated “for misconduct involving violation of company policies, including the Workplace Conduct Policy, the Non-Retaliation Policy, the Personal Relationship at Work Policy, the Professionalism Policy, and the Code of Ethics in Business Policy.”

The United States Federal District Court, in the decision signed by District Judge Paul A. Engelmayer on May 15, 2012, ruled for Mr. Auerbach in the amount of $7,550.20, which broke down to $6,165.20 in unpaid volume override bonuses and $1,385 in unreimbursed expenses.

Reached by email on October 8, Mr. Auerbach said he was not sure why his job at Wells Fargo was being brought up so close to the Nov 7 election.

“I am not sure why this would come up unless someone has gone out of their way to try and destroy my reputation by doing excessive research and found something from over 8 years ago,” he said in the email.

In a Google search for “Jason Auerbach, Wells Fargo,” the court record comes up first.

“You are mistaken,” Auerbach wrote. “I was not terminated for misconduct at Wells Fargo.  The quotations you cite below are unsubstantiated allegations.  Ultimately, the court ruled I was treated wrongfully by Wells Fargo and the court ordered them to pay me substantial monetary compensation for Wells Fargo’s wrongful conduct.”

Reached by phone, James Waters, a Greenwich Native, said that in July he saw Mr. Auerbach at the beach with his charter change petition and large sign, and didn’t think it was right.

Waters, who is a former Navy Seal platoon commander who was born and raised in Greenwich, serves as a Navy military reserve officer and is an unaffiliated voter.

“These guys have been very diligent about campaigning and put a friendly face on it and talk about voter choice and make people think they’re on the voters side, but I think the real story behind Mr. Auerbach and by extension, Peter Sherr, is there is something more malicious going on here,” said Waters, who works in finance.

“This is why I’m getting involved. I’ve made my life standing up to bullies. When I see that I think it’s important people stand up to them,” Waters continued, adding, “I have zero axe to grind.”

RTC chair Stephen Walko responded to an email on Thursday afternoon  inquiring about the vetting process for candidates.

“I have read the opinion of the Court and the response from Jason.  As an attorney who handles labor and employment matters, I am fully cognizant of the various sides of disputes between employees and their former employers,” Walko said. “To be sure there are always at least two sides of any story in these types of situations.”

Walko said comments by the Court had been discussed and that the RTC listened to Jason, and continue to fully support him and his candidacy.

“To be clear, the RTC Officers fully support Jason and his candidacy.  This type of personal negative attack does not serve the Town well.  The RTC is focused on our campaign to put Greenwich First!  The voters deserve this type of focus.”

However, in an Aug 1 statement from the RTC, two days after the incident at the beach, Walko wrote, “Whether a candidate is petitioning for a primary or to simply be included on the ballot in November, no one has the right to impede their access to obtain the necessary signatures. Any such attempts are simply wrong and not in keeping with the virtues of democracy.”

Following the July beach incident, DTC chair Jeff Ramer said in an email, “I may be the other Party, but I take no joy in this nasty behavior. On the contrary, I would have hoped that dirty tricks and bully boy tactics to obstruct a fine young person from petitioning onto the ballot was still not the Greenwich way.