In January Jenny Baird and Karen Giannuzzi returned from the Women’s March in Washington, DC where they were among hundreds of thousands protesting Donald Trump’s agenda the day after his inauguration. 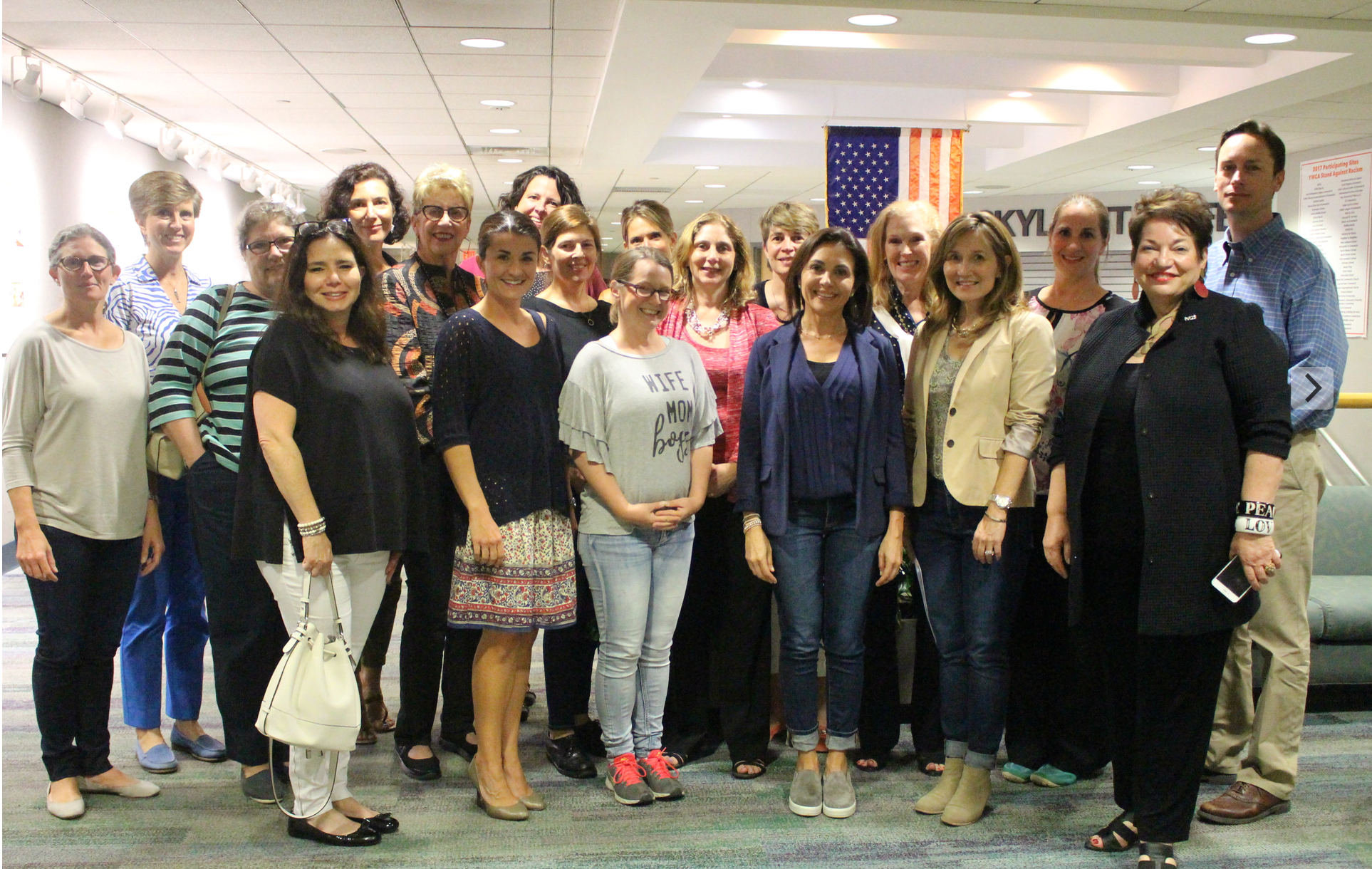 Some of the members of March On Greenwich at the YWCA on Sept 18. All but two photographed are candidates for RTM on Nov. 7, 2017 Photo: Leslie Yager

The event, a shadow inauguration of sorts, cut across age, race, and socioeconomic status.  The duo from Greenwich, who had organized buses to transport Greenwich women to and from the march, returned to Greenwich eager to sustain the energy.

Toward that end, the women began to familiarize themselves with local government in Greenwich, in particular the Representative town Meeting (RTM), which is comprised of 230 members across 12 districts and meets eight times a year at Central Middle School.

“None of us knew about the RTM.  So many of the members are over 65 and dominated by men,” Giannuzzi said on Sept 15, a date of particular interest to March On Greenwich, the group she and Baird founded.

“We wondered where were all the women with children in town,” she said.

March On Greenwich, which quickly drew several hundred people to a closed Facebook group, next reacted publicly to the arrest of RTM district 8 leader Chris von Keysering for Sexual Assault and the RTM.

In fact, Mr. vonKeyserling, who according to his arrest warrant, said to his victim, a 57-year-old woman employed by the town-owned nursing care center The Nathaniel Witherell, “I love this new world. I no longer have to be politically correct,” before pinching her in the groin, is running for re-election on Nov 7.

In light of both Mr. von Keyserling’s arrest and that of another RTM member, Chris Sandys who was charged with possessing child pornography, RTM Moderator Tom Byrne said the RTM lacked a mechanism to remove a member.

“This is not a private association,” Byrne told Tony Savino during a January interview on WGCH 1490 am. “These are elected officials and what can be done is limited.”

When the RTM declined to add the March On Greenwich women to a subsequent meeting agenda when Giannuzzi and Baird asked to read a short statement denouncing von Keyserling’s behavior, they got an eye full.

The moderator asked for a show of hands for who would agree to add the women to the agenda to read their 426 word statement.

“Not a single person raised their hand,” Giannuzzi said, though a few women apologized in the hallway afterward.

Beyond being disappointed at the RTM meeting, Giannuzzi and Baird said they were surprised at what else they learned about the RTM.

“Every elected official should have a town email address,” Giannuzzi said. “Some of them don’t even have an email listed.” A search of RTM members’ email addresses yielded a smattering of work addresses and personal hotmail, gmail, AOL and Yahoo addresses, as well as members with no email address at all.

The March On Greenwich women were not the first to urge change to the RTM.

The League of Women Voters of Greenwich’s  published their list of recommended changes for the RTM, which includes assigning town email addresses to all 230 members. They also urge term limits to RTM leadership, time limits for speakers, and upping the $5,000 threshold for approval of any expenditure or grant, which has been in existence since 1963, to $25,000.

Returning to their original idea of increasing engagement in local government, March On Greenwich got busy hosting cocktail parties and coffees to familiarize local voters with the RTM and to recruit candidates.

“We’ve recruited 40 to 50 candidates, predominantly women, but there are five men. Many have children,” Giannuzzi said on Friday morning. “We found that many people have an international focus but don’t know what’s going on in Greenwich.”

“We are Republicans, Democrats and independents,” Giannuzzi said of the March On candidates.

“Greenwich is such a purple town and it really represents the US. This is about civic engagement,” she continued, adding that to run for RTM, it is not necessary to be registered with a party.

“The idea is to get people engaged, and maybe down the road run they will run for a higher office,” she said.

Unlike other offices, the November ballot does not indicate a candidate’s party affiliation. In fact, March On Greenwich meets at the YWCA under the understanding that the group is strictly non-partisan.

Giannuzzi said her group was grateful to all the current RTM members who are volunteers. She said the goal wasn’t to target them or necessarily bump them from office. But, she said, “Greenwich is racially and ethnically diverse, and the RTM doesn’t reflect that.”

The significance of September 15 was that 4:00pm was the deadline for potential RTM candidates to submit signed petitions with at least 25 signatures.

“In all my years, I never remember so many petitions coming in,” she said. “It seems a lot of people are interested in running for RTM,” Budkins said.

Budkins said her office received a total of 110 petitions, 31 of which were from incumbents, with a total of 79 new candidates whose successful petitions earned them spots on the November ballot.

All those petitions resulted in a number of contested races.

In District 8, Chris von Keyserling’s district, there are 11 more candidates than the designated 26 spots, for a total of 37 candidates.

The number of members allotted for each district is dictated by section 41 of the town charter.

“We make a calculation every two years based on a formula set forth in the charter,” said Republican registrar of voters Fred DeCaro, who explained the formula is based on the number of electors in the town, divided by 230.

The RTM candidates will be listed in alphabetical order on the back of the Nov 7 ballot, which does not indicate the candidate’s party affiliation.

“We’re focusing on a positive message. We’re trying to improve the diversity on RTM to make it relatable to people who use the town services – the parks, the athletic fields and the schools – so that they can have a greater voice on the RTM,” Giannuzzi said, adding that for almost all of the new candidates, it’s the first time they’ve been involved in government beyond voting. “People never saw the need for it,” she said. “But a lot of these women have been active in their PTAs or with non profits.”

On Monday night at the YWCA, the executive director from the Yale Women’s Campaign School’s Patricia Russo addressed the March On Greenwich members, most of them RTM candidates.

von Keyserling Returns to Court, So Do Protestors