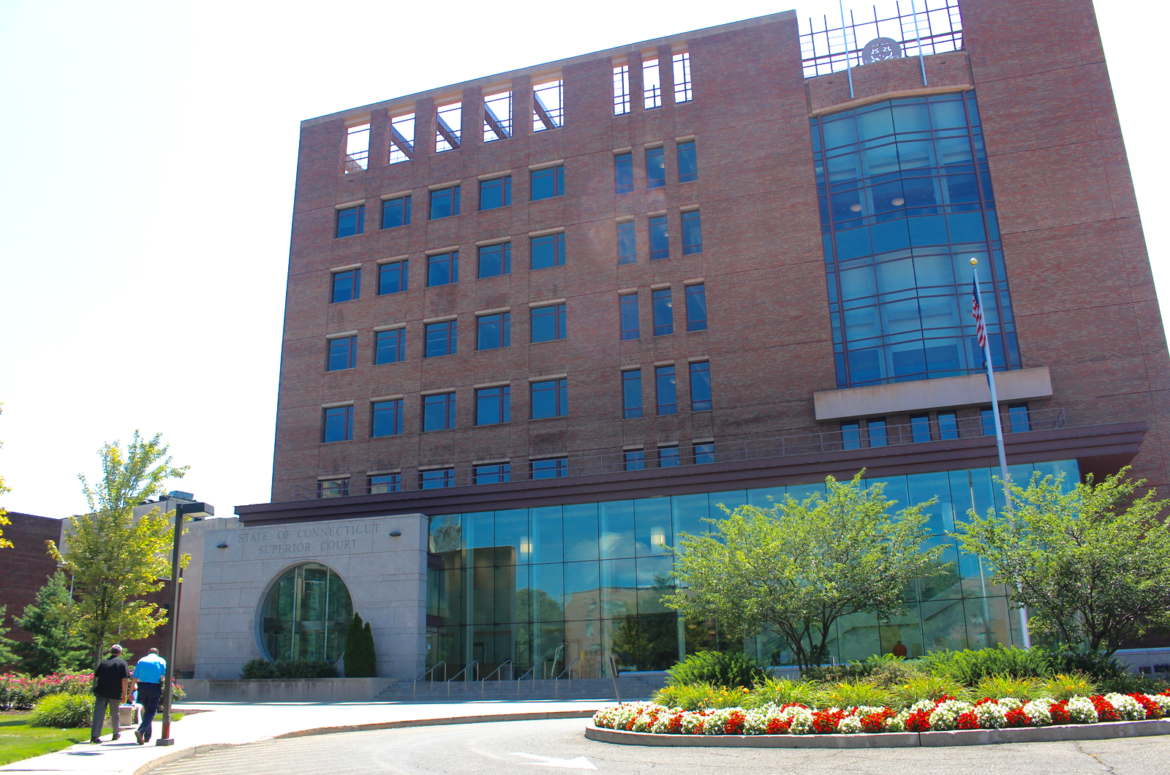 March 2, 2021. The following article has been updated to clarify language used by attorney Cassone representing Mr. Sherr in Stamford Superior Court in 2017. Attorney Tom Cassone argued in court that even “if” defendants conduct could be considered “obnoxious,” as alleged by plaintiff, it was protected free speech under the First Amendment. An attorney for Mr. Cassone said at no point did Mr. Cassone assert that defendants’ conduct was obnoxious, nor does he believe that today.

Original story, July 2017. After five hours in Stamford Superior Court’s room 6A on Wednesday and another three hours on Thursday, Judge Edward Karazin, Jr. issued his ruling on Peter Bernstein’s request for an injunction against Jason Auerbach, Peter Sherr and Randall Smith for allegedly interfering with his petition efforts.

Judge Karazin said that Bernstein had not proven he suffered irreparable harm and would therefore not have an extension of time for collecting signatures.

On July 25, Bernstein, a current BOE member, was passed over by the RTC for endorsement for another term, in favor of incumbent Peter Sherr and Jason Auerbach.

The next day, July 26, Bernstein’s petition was certified in the Registrar’s office.

On Friday the 28, he took the day off work and began circulating the petition with the help of volunteers seeking to collect 637 signatures to earn a place on the ballot. If he achieves 637 signatures, which may be the case once the verification process is complete, he will vie with Sherr and Auerbach for just two seats.

Coincidentally or not, Mr. Auerbach said that on the 28th he began circulating a petition for charter change, which he described as his signature issue for his campaign.

“We are advancing the issue of charter change. That needs attention,” he told the court on Thursday.

Peter Sherr said the reason he headed to the dump Saturday the 29th, rather than go door-to-door to visit registered Republicans, was that party affiliation had no bearing on who could sign the charter change petition.

Mr. Sherr who is an advocate of changing the town charter to scrap the rule preventing either party from holding the majority. There would also be a change to the system of having half the eight seats on the Board in play during municipal elections. The system of having a maximum of two seats for Republicans two for Democrats would be replaced. Instead, five spots on the Board would be up for election in one municipal election, and three seats would in the next.

Mr. Sherr told the court on Thursday that at the dump, “He (Auerbach) asked people if they wanted to sign a charter change petition so the BOE would be populated by people the voters choose, and not those appointed by their parties.”

Back in May, the Board of Education, voted a “sense of the meeting resolution” for charter change.

They voted 6-2 to reject the proposal. Those in favor of charter change were Mr. Sherr and Lauren Rabin.

Though anyone could sign the charter change petition regardless of political affiliation, Mr. Auerbach said he went ahead and asked people their party affiliation “because I had the presentation to the charter change commission and wanted to show them there is a cross-section of people signing.”

Asked whether he heard Katie Yu testify on Wednesday that he had encroached on her space and interrupted her, Mr. Auerbach said he had heard the testimony, but only recalled a friendly, civil conversation with her.

“Is it your testimony that what she said is false?” Mr. Ryan asked.

“I’d say it was amicable, and when she was done (talking to a voter), I would then say, ‘Would you like to hear more about the issue?'” Auerbach replied. “It was amicable. We were chatting.”

In fact, Mr. Auerbach categorically denied interrupting or interfering Mr. Bernstein or any of his volunteers.

The incident Auerback recalled took place at the dump on July 29 when Mr. Bernstein was speaking to a voter. “I believed they had finished speaking, but the voter had not signed yet,” Auerbach said. “He aggressively asked me to stop,” Auerbach recalled of Mr. Bernstein. “I walked away from that voter. Mr. Bernstein didn’t appreciate that someone was trying to talk to a voter.”

Over and over Mr. Auerbach insisted that charter change is a timely issue, and not a pretext to interrupt Mr. Bernstein’s efforts, which had a hastily approaching deadline.

“The First Selectman’s race is going to be centered around charter change,” Auerbach said, though he added, “I don’t think the charter change referendum will be on the ballot. It may come to the RTM.”

“The relief sought doesn’t bear any resemblance to the claim,” argued attorney for the defendants’ Tom Cassone. “They make it seem the whole universe was based on the dump and Tod’s Point for a few hours. Also, he chose not to get signatures for the first two days.”

Cassone said the plaintiff showed no evidence that the behavior of the defendants prevented people from signing, though a video taken by Mr. Bernstein showed a voter throw his hands up in exasperation.

“With the exception of Jan Goossens,” Cassone said. “And he signed Mr. Bernstein’s petition anyway.”

“What the plaintiff is asking you to do is legislate petition activity,” Cassone said to the judge.

“Why not just hire people to jostle you all the way around?” attorney Ryan asked. “If there are no restrictions on interfering with the petition process, I’ll hire a bunch of high school kids and tell them to scream and get in the way.”

Mr. Ryan argued that the rights of the defendants had been placed over those of the plaintiff.

Attorney Bianco repeatedly suggested Mr. Bernstein could have petitioned elsewhere if he didn’t like the behavior of the defendants.

“The implication has been made that he (Bernstein) didn’t try hard enough,” attorney Ryan said. “But you have to allocate your limited time. A big focus was to get other people to circulate the petition.”

At the end of the day, the judge said the burden of proof had been on Mr. Bernstein.

The defendants’ attorney Tom Cassone said even if his clients’ behavior had been obnoxious, which he did not believe to be the case, Karazin said the plaintiff had not presented enough evidence.

Judge Karazin said the state statutes had not foreseen this type activity and there were no directly analogous court cases.

“The allegations of the complaint and standard of review have not been proven by a fair preponderance of evidence,” Karazin said, adding that the court found the claim of malicious and unconstitutional conduct causing imminent and irreparable harm had not been demonstrated.

And while four witnesses on Wednesday testified that they had been on the receiving end of interruptions during conversations with voters, Karazin said it was still the defendants’ exercise of free speech and the behavior hadn’t reached the standard of “irreparable harm.”

Karazin did say that should be defendants’ behavior continue, there could be other remedies, including charges of breach of peace, creating a public disturbance or disorderly conduct.

“It’s unfortunate that people have to resort to the court process because campaigning has gotten so obnoxious, and people feel deterred from exercising their constitutional right,” said attorney for the plaintiff John Ryan of Russo & Associates after the decision was handed down. “Hopefully this is moot and Mr. Bernstein will get the 637 verified signatures needed to get on the ballot.”

As of Thursday afternoon the Republican registrar had not finished verifying and counting to see if Bernstein has the required 637 signatures and have a chance to bump either Mr. Sherr or Mr. Auerbach from one of the two Republican spots on the board..

As soon as the results are announced, Greenwich Free Press will issue an update.