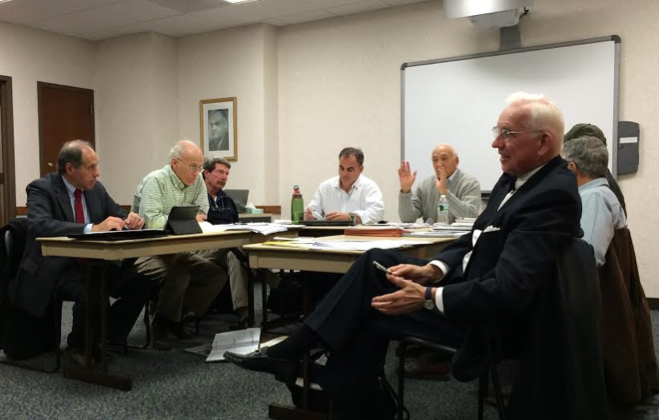 Ian MacMillan, the Town’s state appointed Harbor Master, sat silently at  Wednesday night’s Harbor Management Commission (HMC) meeting at Greenwich Town Hall. Conversation devolved to the same contentious arguments that have been brought up time and time again concerning who has ultimate jurisdiction over the harbors of Greenwich.

Again and again the commission and larger than usual audience who turned out on a cold night, reminded themselves there still is no harbor management plan.

HMC member Bruce Angiolillo distributed dozens of spiral bound, tabbed copies of a presentation he prepared containing seven sections. He said the intention was to clarify the statutory framework and what he described as “the lay of the water.”

Angiolillo, a practicing attorney who lives in Old Greenwich said, “I am just a lay person who has some training and collected the statutes to offer some observations.” With respect to a legal opinion, he said he’d defer to the Town’s attorney.

Though he did not speak during the meeting, MacMillan was often the object of discussion.

On Thursday, reached by phone, MacMillan summed up Wednesday night’s meeting. “Thank God for freedom of speech,” he said. “We’ve heard it all now.” 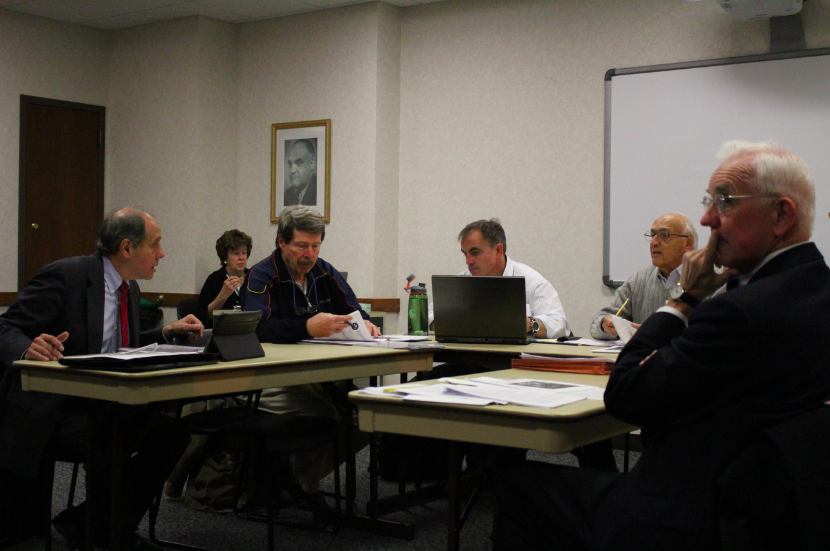 For months, several members of the Harbor Management Commission (HMC), including its chair Frank Mazza, tasked with writing a harbor management plan for Greenwich, have bickered with MacMillan, demanding his “list” of mooring permits, and questioning his expenses. And for months MacMillan has argued that multiple issues need to be sorted out first, not the least of them being unpermited moorings in shellfish beds and discrepancies over where the border is between Stamford and Greenwich in the water.

The HMC held a public hearing in October and have hired a consultant Jeffrey Steadman to help tackle their tedious task.

MacMillan has repeatedly insisted that without a state approved plan, the Town has no binding effect over his activities.

Angiolillo’s handout, section 1 cites the Town Charter, Article 19, Sec. 307, which states that the Town shall have authority to regulate anchoring and mooring of all vessels, boats and craft and to designate moorings. He referred to the Special Legislative Acts of 1949 and 1955, which he said granted home rule to the Town of Greenwich, to the Board of Selectmen specifically.

“I am here as an agnostic,” Angiolillo said. “I’m not here advocating more or less involvement in moorings than presently exists with the harbor master. Right now Ian’s responsibilities over moorings is at the Town’s suffering.” He said the Town charter gives the authority to the Selectmen, which, in turn the Selectmen delegated to Parks & Rec.

Angiolillo said that in 2009 Parks & Rec delegated authority to the then Harbor Master Jonathan Asche, but that nothing in section 15-1 strips the Town of its authority over the harbors. 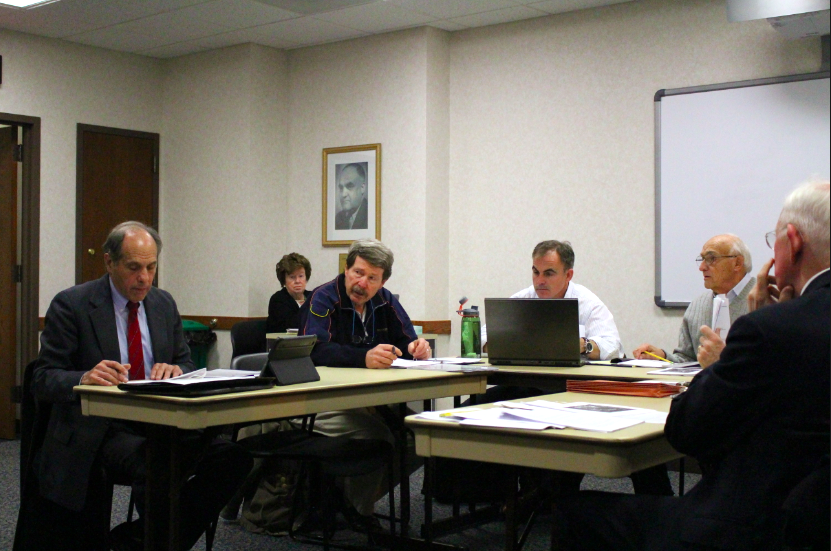 “So when people say that the Town, until it has a harbor management  plan, is stripped of authority with respect to controlling its anchorages, its mooring fields and the like — it’s just not true,” Angiolillo said.

“The notion that …that the Town has no authority over deciding who gets a mooring and who doesn’t is subject to Hartford. That’s just not there,” Angiolillo said.

“I don’t mean to suggest that the harbor master is operating outside the law, but he is operating a regime right now which is only because the Town has given it to him and the Town can take it away,” he continued.

Angiolillo, addressing Silberberg, said he was confounded that anyone would be arguing to take away authority possessed by the Town and yield to the State. 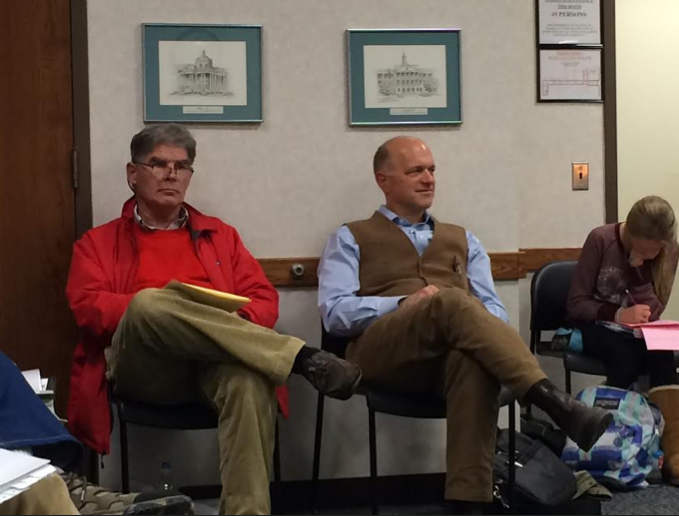 Still, Gary Silberberg, along with several members of the audience kept insisting there remained a conflict with State law, referring again to Section 13b-51 which refers to the Commissioner of the DEEP (Sec. 13b-51. Jurisdiction over harbors and navigable waterways.)

HMC member Peter Quigley, who said he didn’t necessarily disagree with Angiolillo, urged the commission to have lawyers sort it out.

“It’s a legal issue,” Quigley said, suggesting the issue be interpreted legally between the town Attorney and the attorneys at the state level.  “To sit here trying to make determinations on what to do with these problems when we don’t have a plan…we need a legal interpretation.”

Mazza said the Board of Selectmen have no intention of giving up control of the harbors to anybody. “They have the ultimate veto.”

“That’s their fight,” Quigley said of the Board of Selectmen. “To me it’s a legal interpretation.”

Illegal Moorings: Mexican Standoff
Angiolillo said the commission was in receipt of a letter from Carolyn Swiggart, lawyer representing a local shell fishermen who holds a lease on shellfish beds in Old Greenwich.

‘There are waterfront property owners with moorings off their homes that have been there for many years,” Angiolillo said of unpermitted moorings located in shellfish beds in Old Greenwich addressed in the Swiggart letter.

“I think the Town in the first instance decides if the shellfish bed owner concludes he can block it, he can go to the Dept. of Aquaculture in Hartford and complain to them.” But for now, he said, the situation is frozen — “it’s a Mexican standoff.”

Murky Town Line off Coast of Stamford and Greenwich
“We don’t know where the Town line is at this point,” Mazza said when Gary Silberberg brought up the issue of Greenwich boat owners whose moorings may in fact be in Stamford’s waters. The blurred boundary has implications for policing and whether Greenwich or Stamford would issue a permit.

The conversation again circled back to questions of Town versus State jurisdiction.

“We have differences in interpretation,” Silberberg said, suggesting the commission should seek a legal opinion from Hartford. “I’m not sure the Town law department isn’t biased. Perhaps we should go to someone on an independent basis.”

Hans Isbrantsen, who was Indian Harbor Yacht Club marine chairman in 2010, said that the State had sued IHYC, ordering them to remove moorings. Isbrantsen said that like Angiolillo, he had based his arguments on the 1949 Special Acts, but was unsuccessful.

“In the process we spent over $125,000 fighting the state,” Isbrantsen recalled. “I went to the town and asked them to defend us. They refused and let us hang out to dry. We finally settled with the State.”

He said that at the time, the DEEP gave him an opinion that the Town does not have exclusive authority.

“It’s the harbor master, appointed by the state, in this case, Ian, who always has the authority. I have a letter from the DEEP on that. The Town never gave the authority to the state — they never had the authority. They had some authority,” Isbrantsen said.

“If two people are at odds, the state always wins in every case. You said the Town turned over control to the State,” Ibrahamsan said to Bruce Angiolillo. “They didn’t. They never had exclusive authority, and they don’t have it now.”

“The legislative authority invested in Ian is limited to matters that relate to navigation and safety,” Angiolillo insisted.

“At the end of the day, if someone says I want my mooring here or there, Ian makes that determination, not the Town,” Isbrantsen said. “In my mind the State is protecting us from ourselves. The Town has no plan. We’re handing them money and getting nothing back for it. Local control has been totally wrong.”

“The harbor management plan is only advisory and at all times the State has the right to say, ‘I don’t like it,'” Isbrantsen said.

Alexander said it was his understanding that the federal government required harbors of refuge, especially Greenwich, but, he said, “We don’t even know where our boundaries are?”

Mooring Fees – No Enforcement
On the topic of fees collected and what a harbor fund would go toward, Mr. Mazza said brought up Mr. Masi’s idea presented at the October public hearing that all boaters pay a standard fee.

“If you’re going to collect, then make it a boating registration fee. Make it $20 or $25. The current system is unfair and broken. We have people who have paid seven years religiously, and people who have never paid.”

Mr. Isbrantsen said under the current system he and others paying their fees get nothing in return. “That’s why the Town is wrong.”

“We have monies coming in from a select few…What’s going on here?” asked Syl Pecora. “Let’s just fix what we have.”

“It starts with a harbor plan. We gotta do a plan,” Quigley said.

“Enforcing regulations on a boat is difficult. You can’t just tow them and lock them up. Compliance now is pretty much voluntary. That’s why we need a plan. That’s something we need to write in the plan. We need to write up rules that have repercussions.” – Lt. James Bonney

Mr. Mazza said the Town attorney was reviewing the discussion materials prepared by Angiolillo and that the Selectmen have included that on the agenda for Friday’s Board of Selectmen meeting (Nov. 21 at 10:00am.)