At Wednesday’s Harbor Management Commission meeting, Frank Mazza, the former chair of the commission gave an update of the Mianus dredge project, which he said is almost competed.

“They are saying they’ll finish at the end of this month,” he said.

Mazza said that unfortunately, one of the two dredges broke down and was out of commission for two weeks while it was being repaired.

The good news is that the channel is all dredged from railroad bridge to the Riverside Yacht Club.

“That part of the job is completed,” Mazza said, adding that in the inner harbor, the dredge is currently in the middle of the Palmer Point Marina and working its way down to the railroad bridge. “That will complete the project.”

The contractor said they have dredged 51,000 cubic yards as of a little past mid- December, and that they projected they might have 1,000 yards to go.

Mr. Mazza said the amount of cubic yards is based on a six foot depth with one foot of over dredge, and that the contractor does not dredge under the bridge.

“They anticipate being done by the end of the month,” Mazza said. “It looks good.”

The federal Navigation Project (FNP) contract is with Patriot Marine. 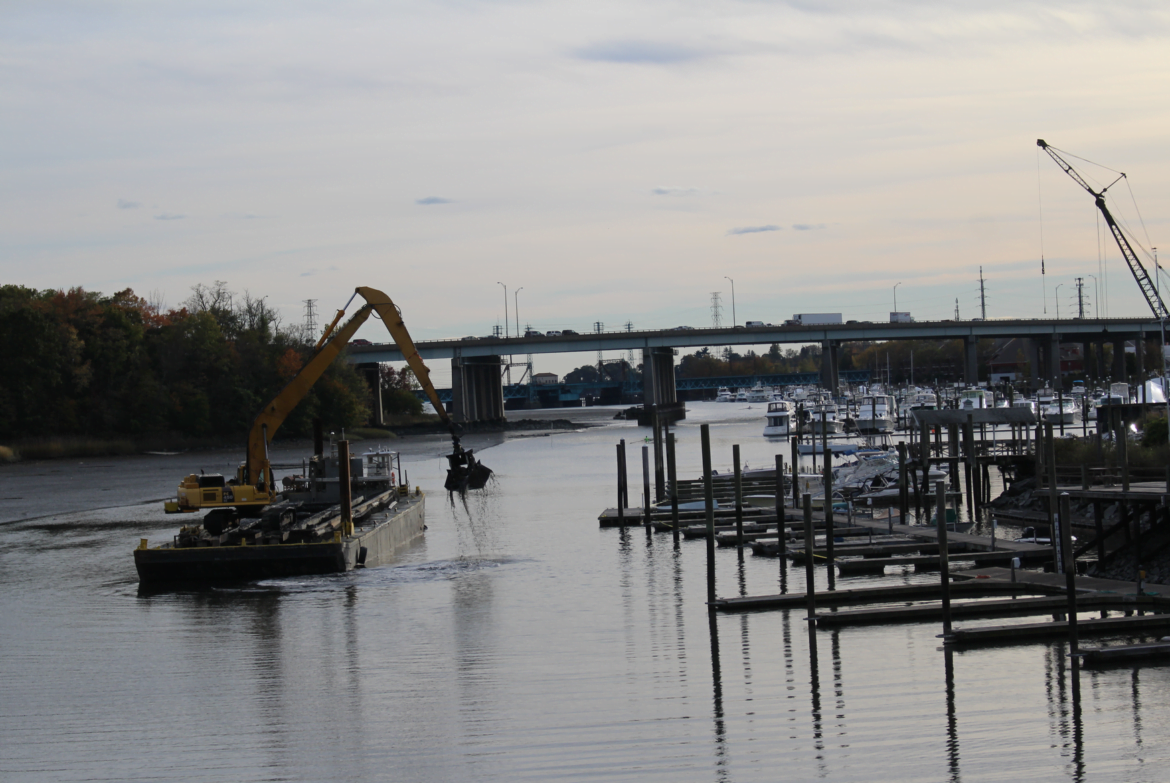 View from Rte 1 in Greenwich of the dredge under way in Mianus channel in October. Credit: Leslie Yager

Geoff Steadman said he’d spoken with the Army Corps of the Engineers (ACE), who joked that it takes up to about twelve years to plan and get permits for a dredge project like this, but that the project takes just three months. 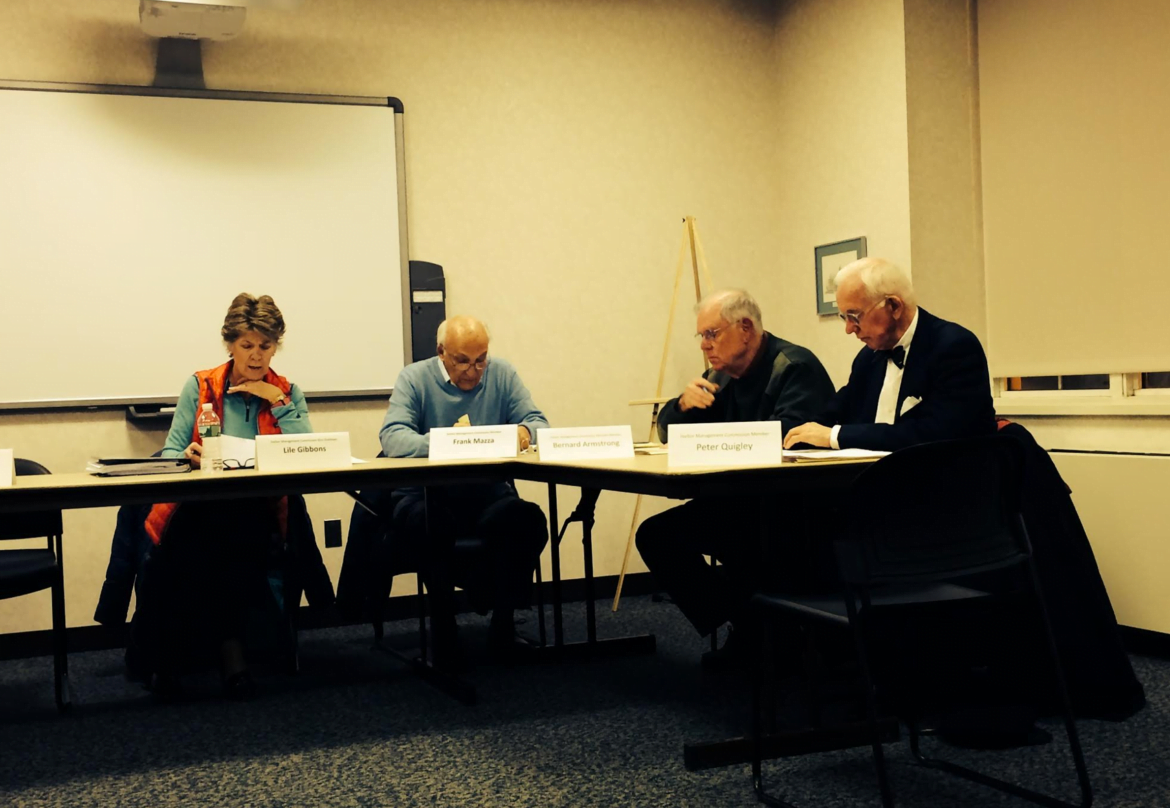 “When we finish we should write up the steps it took to get to the completed project so that there is a record,” he said. “The project started in 2004, when Rick Kral at Beacon Point Marine asked Parks and Recreation Dept for approval to approach ACE to ask about dredging if it were done through the voluntary efforts of the waterfront community. “Then the project stalled because of the lack of federal funds,” he recalled.

Mr. Steadman offered to write up a record of the efforts from the beginning, and Jeff Freitag, Superintendent of Marine Facilities & Operations, offered to help. 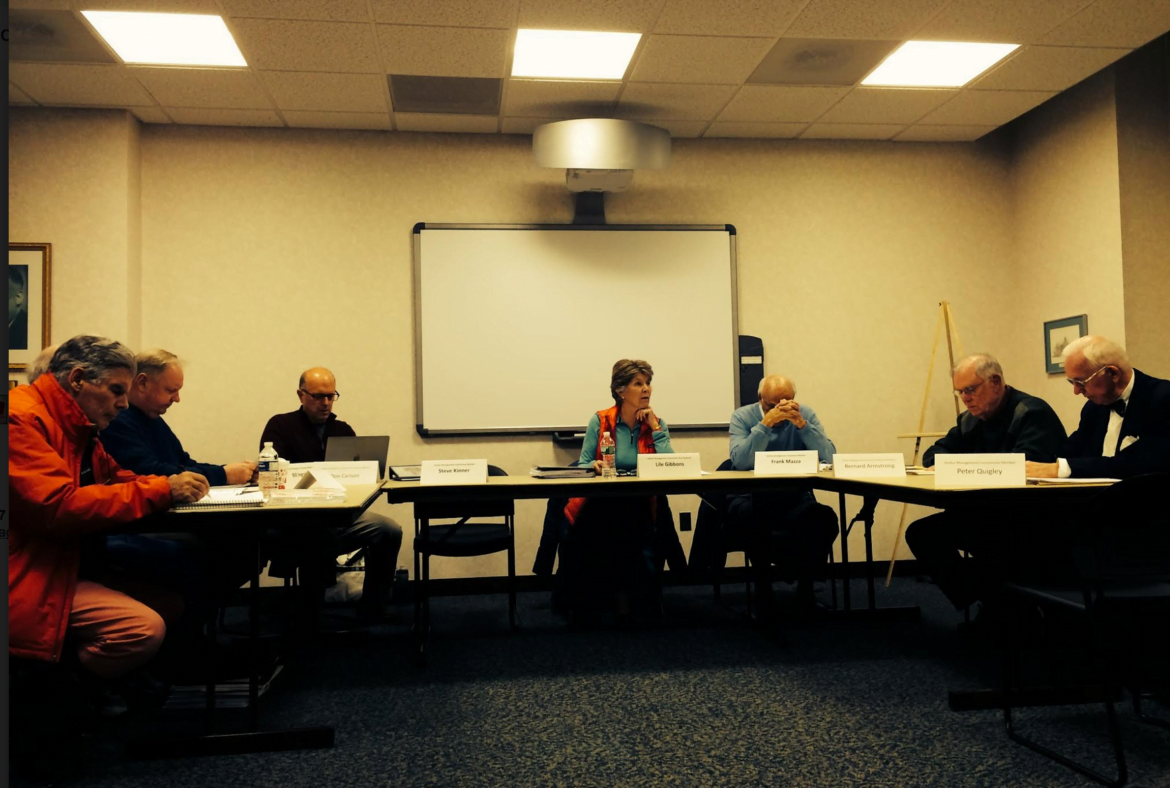 Mr. Armstrong inquired when the dredge equipment will be removed from the river. “If they have another job to go to, it’ll go quickly. If not, it’ll be there for a while,” Mr. Mazza said. “It’s a chore to move this equipment around. It’s slow and nobody wants it in their back yard.”

Mr. Steadman said there was a question about whether the federal aids to navigation would be put back in place when the work is completed, and that indeed that would be done.