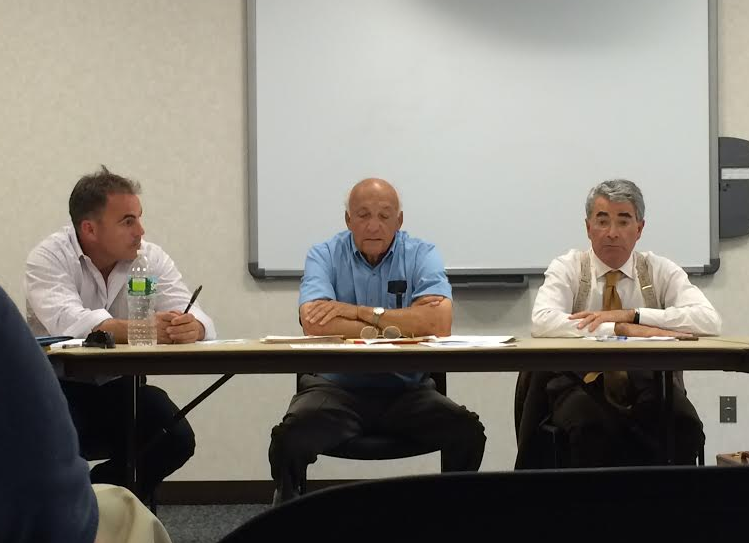 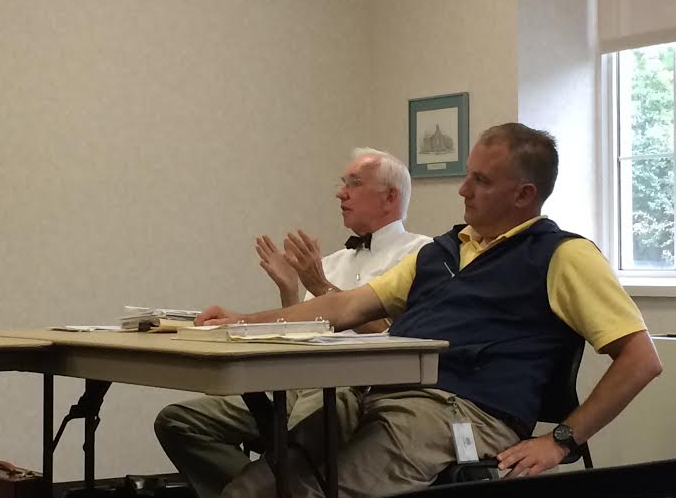 Mazza said shellfish lessee Robert Griffin has hired a lawyer, Carolyn Swiggart, and asked Old Greenwich residents and Rocky Point Club members with boat moorings in his shellfish beds to sign an agreement and each pay a $200 fee.

Mazza described the Old Greenwich homeowners as “up in arms” and estimated the number of moorings from Rocky Point Club located in shellfish beds as 14 or 15.

The commission chair said he’d received a call from First Selectman Peter Tesei asking for background and inviting him to a meeting that took place on Tuesday, July 15 with the homeowners, club officers and members in Old Greenwich. Mazza said that he,  Steve Kinner and Mike Van Oss had attended the meeting “strictly as observers.” Harbor Master Ian MacMillan was also in attendance. Also present at the meeting was the president of the Rocky Point Club, David Robbins, who is an attorney, as well as two other club members who brought attorneys with them to the meeting.

Mazza said that Mr. Griffin attended the meeting with his attorney Swiggart and that both the Town Attorney and Town Assistant Attorney attended the meeting, which featured a 2-1/2 hour conference call that included five state officials: Brian Thompson from DEEP, Director of the Office of Long Island Sound Programs and his supervisor Brian Golembiuwski ; Capt. Chuck Beck, DOT Marine manager for the state; David Carey, Dir. of Connecticut Aquaculture.  Carey was accompanied by an Environmental Analyst from his department, Alissa Dragan.

“We had almost as many lawyers as other people there,” Mazza said of the First Selectman’s meeting to discuss moorings in Old Greenwich.

“There is a lot of concern because there are a lot of implications for the state including shellfish beds, moorings and charges for moorings in shellfish beds,” Mazza said adding that during the conference call, one state official observed that the shellfish beds may be more valuable as moorings than for shellfish.

“They feel they are having rights taken away from them if they can’t put their moorings in front of their house,” Mazza said of the Old Greenwich residents and club members, who he said are concerned about their property values.

The meeting ended with no resolution, according to Mazza, except that the homeowners and Rocky Point Club plan to go back and talk further to the shellfish bed operator and his lawyer.

“I’d like to say that Ian was right,” said Kinner. “Ian was following state regulations. He may have started this whole issue but Ian said the state law says you have to have permission  for a mooring in a shellfish bed.” – Steve Kinner

Gibbons asked hypothetically what would happen if the shellfish bed operator were to refuse permission.

“If they refuse permission then they can’t put the mooring in,” Mazza said. “If they don’t put them in, then the club doesn’t operate. It’s a serious problem.”

Mazza explained why he believes it’s a problem to have moorings in shellfish beds. “His ability to  operate within the beds. They usually drag and it effects his visibility and he can get his gear snared in the moorings.”

Mazza said Tesei has drafted a letter to the commissioner of the Dept. of Agriculture asking for a definitive ruling on who is entitled to charge a mooring fee. “Dave Carey said yesterday that he’s going to try to get it but that it might take six months to get it,” Mazza said.

Harbormaster Ian MacMillan, who is ex officio member of  the committee, was not at the Wednesday meeting in the Mazza room.

Reached by phone, MacMillan said, “Several Old Greenwich land owners are interested in locating their moorings in areas close to their properties. Most, if not all, prefer locations in a shellfish bed. Some have been located in that area for over forty years. None of them have ever been granted a state harbor master or DEEP issued mooring permit and many do not have permission from the shellfish man, Robert Griffith.”

MacMillan said he became aware of 12 Old Greenwich neighborhood moorings last October. “None of them were permitted, which is what brought us to knock on doors and contact neighbors to determined who owned those 12 moorings. Once that was done, we realized that none of them had ever been issued mooring permits,” MacMillan said. “And because they’d never been issued permits, the issue of permission from shell fishermen had never come up, which is what precipitated all of this last minute interest.”

“Had these neighbors been compliant with state law, this issue would have been dealt with decades ago,” MacMillan continued. “It is my job as state harbor master to bring mooring owners in Greenwich waters in compliance with state and federal law. The sooner the better.”

The Greenwich Harbormaster said a mooring owner must keep in mind that a mooring is not an extension of their property, but rather a privilege extended to them by the state of Connecticut. “They have a right to anchor their vessels in navigable waters, however, they do not have a right to a mooring, especially in a shellfish bed without the permission of the shell fisherman.”

MacMillan said that littoral rights regard access for shoreside properties to navigable waters, but that does not entitle them to locate a mooring in a shellfish bed. “They are entitled to the view, but not to the waters or the land beneath them,” he said.

As for the shellfish beds, Macmillan said, “They have no idea how valuable they are. A series of shellfish beds can yield hundreds of thousands of dollars if worked properly, whereas the income derived from charging a mooring fee would barely cover the removal of those moorings in a timely manner for cultivation purposes.”

Lastly, MacMillan said that during the meeting, the Rocky Point officials emphasized that they are primarily a swimming, beach and social club and that their boating and sailing program is a small but important portion of activities available to members.

“No person shall set, tend or assist in setting or tending any lobster pot, trap or similar device for the catching of lobsters or set any mooring on any oyster bed without the permission of the owner or lessee of such bed.” – Connecticut General Statues, 16-157 a (e)

Harbor Management Commission member Bruce Angiolillo, also an attorney, identified himself as a 20+ year member of the Rocky Point Club.

“The shell fisherman has a right to farm the seabed,” Angiolillo said. “The shellfish bed owner has the right to decline the permission if the mooring is going to damage the bed or interfere with it.  That means the permission can’t be denied for no reason at all. It can’t be because they don’t like how they look, because they have a vowel at the end of their name…”

“I do not believe that issues like this should go to court. I really do believe that people should work these things out because we all should share the harbors.” – Bruce Angiolillo

“I just honestly wonder about the circumstance we find ourselves in…Now all of a sudden this year the lawyers are are involved and people want to charge money. Something just doesn’t add up.”