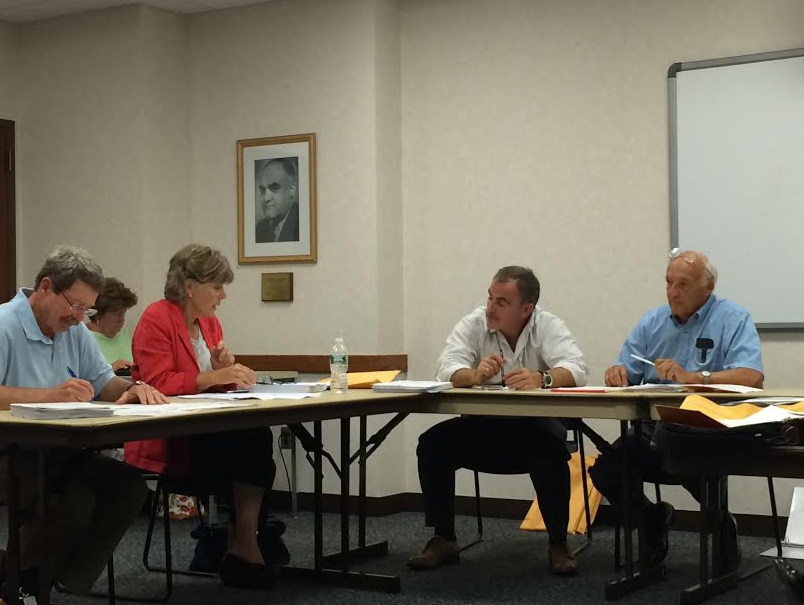 At the August meeting of the Harbor Management Commission, the topic of a budget was introduced by chair Frank Mazza. Attached to the agenda was a proposed budget for harbor management expenses for 2014-2015: 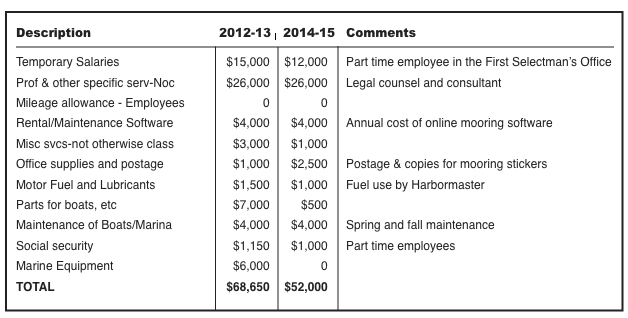 Mr. Mazza said that when the Town’s budget was passed by RTM last May, it passed with a resolution stipulating that the Board of Selectmen, on behalf of the harbor management commission, is authorized to collect proceeds from mooring permits in Greenwich Harbor and such proceeds should be used for maintenance and expenses.

Mazza read aloud section 307 of the Town’s Charter giving authority to the BOS on behalf of the harbor management commission authorizing them to raise funds for harbor improvements.

Once the commission completes a plan, they will become independent of the Selectmen.

Mazza described it as “unusual” to have a budget that is cumulative rather than year-to-year, but that “when money was needed, more money got appropriated.” The cumulative budget started in 2007, Mazza explained. Describing the cumulative budget as a little hard to follow, he said, “We’re proposing this year to take it to a yearly budget.”

“The idea is to go to the BET in September and a budget will be approved and any money left in the existing account will be turned back to the revolving account and we’ll start from scratch.”

Frank Mazza said the harbor management account, is a reserve account, with a total of $233,600, of which $50,175 reflects this year’s in mooring fees collected. Mr. Mazza said that the amount of money appropriated out of the account totals $16,000

Mazza said the $233,600 in funds are reserves, and that the budget, which came out of the Selectmen’s office, is administered by John Crary.

Going through the budget, Mr. Mazza said the item “Temporary salaries” reflected payment for ongoing part time service of Penny Monahan, who was present and taking minutes at the August commission meeting.

“No, it will be done by the town budget director,” Mazza replied.

Lile Gibbons also replied to Mr. Quigley. “We’re not there yet,” she said. “Right now we need to know how much money we have and to come up with a plan.”

Mazza repeated his disagreement. “It’ll be done by the Town’s budget director,” he said, adding, “The Town can do interim appropriations.”

Harbor Commission alternate, standing in for Lt. James Bonney, was Gary Silberberg, who disagreed. “But we don’t know what our income is. We should know how much we have.”

Bruce Angiolillo said, “We are not in the business of spending more money. We are an advisory body, with a very limited role. We do not have the power of the purse,” he added.

After much back and forth, Lile Gibbons said, “We don’t have a plan, but we’ll have expenses to create a plan.”

Mazza said, “Now we’re operating under the Board of Selectmen, but if we want a budget to operate this commission, we have to do it.”

Quigley objected again. “I think we should have someone from the Town come and suggest how to manage the financial ins and outs. You can’t have a budget if you don’t have an accounting procedure.”

“This is the money that’s in the budget,”Mazza said. “I don’t know what else to say.”

Selectman Dave Theis, who attended the meeting, suggested having the Town comptroller come to the next commission meeting to explain, but Gibbons warned that would represent a month’s delay in moving toward completing a harbor management plan.

“We’re just determining how much money it will cost to come up with a plan,” Gibbons said.

Catch 22
Michael Von Oss described the commission as “hamstrung” because, “We have a budget, but without a plan, we don’t have the authority to spend it.”

“Are we taking care of the expenses we have incurred? There are people involved,” Mr. Quigley said, adding that the Harbor Master, Ian MacMillan, has not been reimbursed for expenses for several months. Quigley directed his the remark to Mr. Mazza.

Gibbons asked what expenses Mr. MacMillan might have incurred and Mr. Mazza mentioned a phone bill.

“I think we can all attest to Ian’s use use of a cell phone,” Mr. Von Oss said.

Mr. Mazza said the harbor master’s phone bill raised a red flag. “It’s not a lot of money. It’s only about $650. He doesn’t have a landline. It’s the only phone he has. Starting in December there were 6,000 minutes, which raised a red flag.”

The harbor master receives a $525 annual stipend for his work and, reached by phone, told Greenwich Free Press that he is available to his constituents 24/7 via phone. He said he pays his phone bill out of his pocket and subsequently submitted 6 months of phone bills for reimbursement.  He has not been reimbursed for his phone bill since November 2013.

After unresolved discussion of the Harbor Master’s expenses, Mr. Von Oss made a motion to approve the 2014-2015 budget and it was passed with all in favor, but for Mr. Quigley, who abstained. “I’d like to know what we’re all voting for,” he said.

Adding confusion to the budget discussion – the collecting of mooring fees and the subject of reimbursing  harbor master expenses – is that Town Charter Section 307, may conflict with state statutes.  The issue is murky because CT General Statute section 22a – 113s states that a mooring fee may only be collected within the scope of a DEEP approved harbor management Plan, and that a specific fee schedule must first be adopted by a vote  of the Town legislative body. Section 22a – 113s also states that the Harbor Master shall collect such a fee.

This begs the question: Without a plan, can there be a fee? Is it appropriate to vote on a budget?

MacMillan answers to the state, rather than the Town. He is an appointee of the Governor. Greenwich municipal code  states nothing shall be interpreted or demand to conflict with the powers and duties of the Harbormaster.

Nevertheless, the commission voted in favor of the 2014-2015 budget and MacMillan has yet to be reimbursed for six months of phone bills.