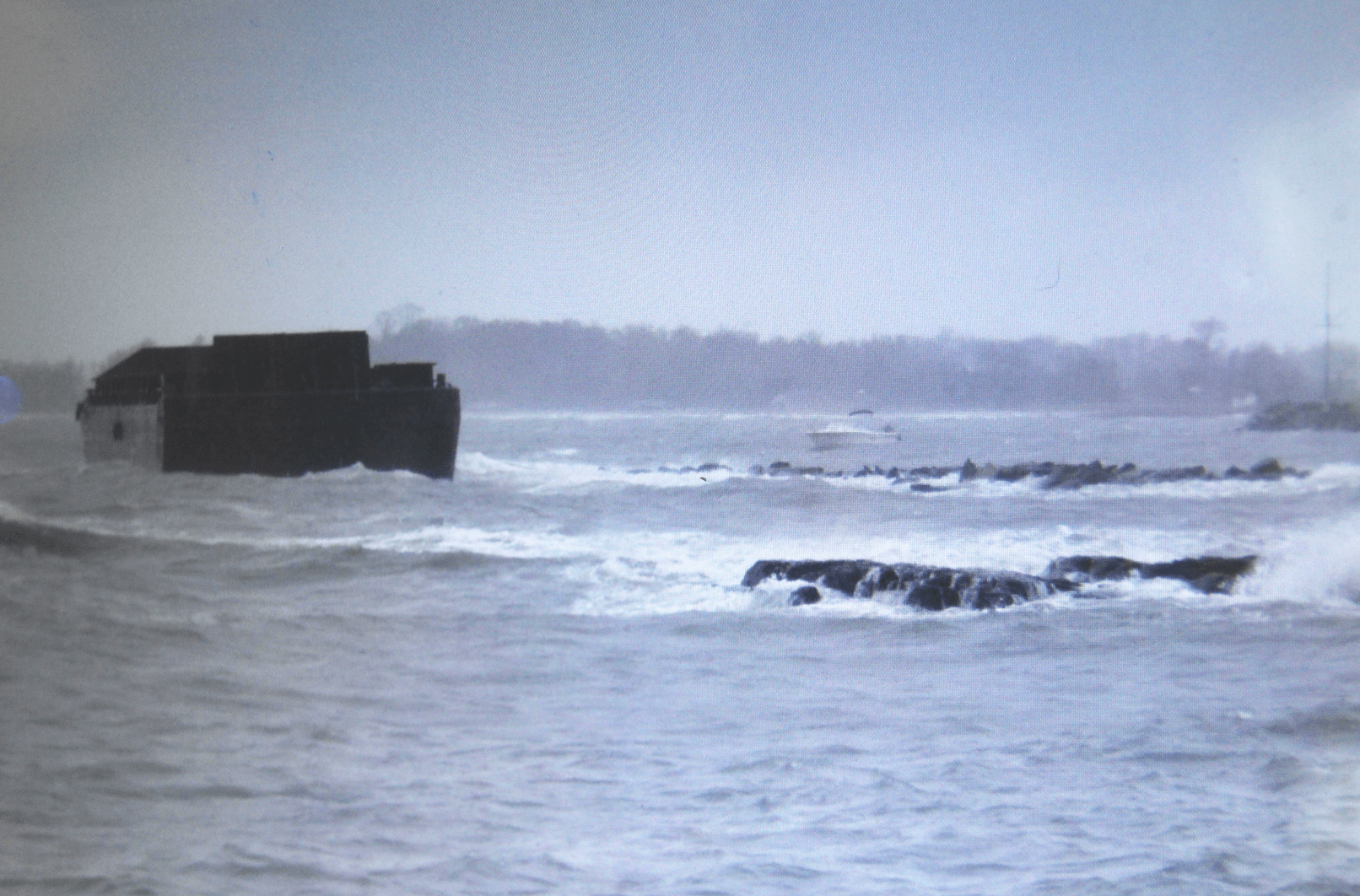 A barge that came loose from its mooring, drifted and got stuck on rocks at Rocky Point in 2014. Photo: Greenwich Harbor Master 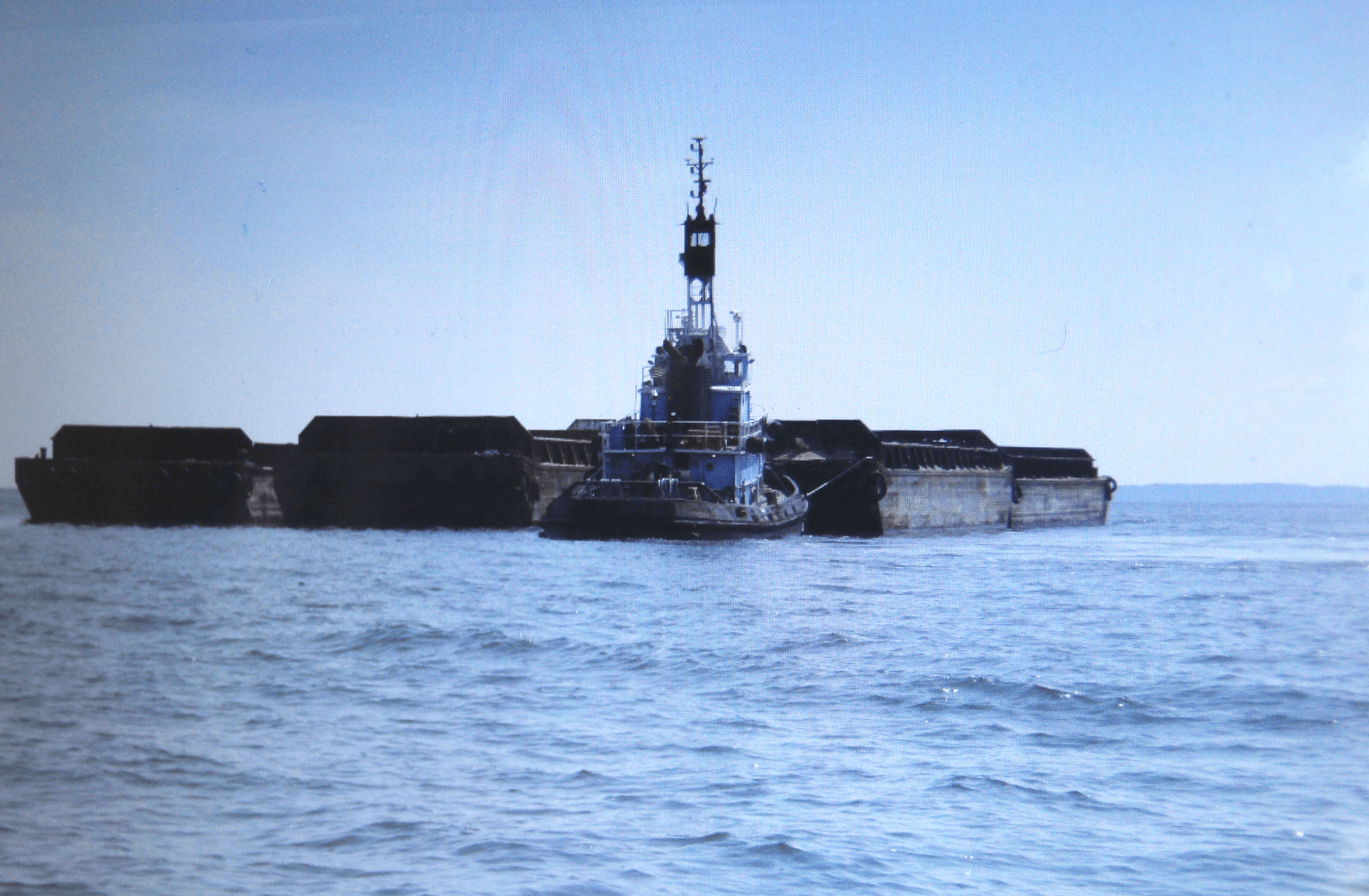 A barge buoy in Greenwich waters off East Manursing Island in Rye, rated for two barges, was photographed in roughly 2016 with at least four barges. Photo: Greenwich Harbor Master

On Monday, Oct 7 at 4:30pm Weeks Marine Inc will hold a public information meeting at Stamford Government Center where they will present present a proposal for a commercial barge mooring in the waters of Stamford Harbor south of the Stamford Breakwater, near Greenwich waters.

The meeting is in the Operations Conference Room located on the 10th floor.

The public is invited to attend the meeting. After the informational presentation, there will be an opportunity for public participation and comments through a brief question and answer period.

Last May, at a Stamford Harbor Management Commission meeting, about a dozen Greenwich residents turned out to learn about the mooring.

Objections were numerous, both on environmental grounds and out of concern for safety of small craft.

The chair of the commission, Dr. Damian Ortelli, told critics of the proposal that it was still just a “pre-application,” which the likened to a rough draft.

The president of the Rocky Point Club said the mooring location is in the line of sight of 60 children learning to sail in their junior sailing program.

The location was also objectionable to residents Dolphin Cove in Stamford.

Also a representative of Norm Bloom & Son, who farm nearby shellfish beds said heavily laden barges can potentially break through and plow through the shellfish grounds and impact the ability to harvest.

An existing barge mooring is owned by Buchanan Marine and an arrangement in which it is shared with Weeks Marine who move materials for O&G Industries has been fraught as the two companies do not get along.

Mr. Knott said he had gotten barge activity under control, but at one point Buchanan’s mooring which is intended for a max of four barges, had up to 13 using it at a time.

He acknowledged Weeks Marine was involved in a barge accident last year.

Barges have grown in size over the years and four barges equal the size of a floating football field.

Also, in May 2014 a barge became detached from its mooring in Stamford waters and drifted to Rocky Point where it got stuck on the rocks.

In September 2018, one of two sand and gravel filled barges being delivered by tug to O&G Industries in Stamford Harbor, cut loose from its mooring and drifted toward the Hinckley Boatyard in Stamford where it hit a $1.5 million custom catamaran yacht.

He also said his commission serves in a local advisory role to DEEP. “We can give them a suggestion that we love it, that we hate it, or that we like it with modifications. They can follow that information or not,” he said.

He also said he had been inundated with complaints and suggested the “public outcry” be directed to DEEP and the Dept of Aquaculture.

“I’m getting six to 10 of these (letters) a day saying they’re going to ruin the Sound and they (barges) are going to move, and there will be dead kids in the water,” Dr. Ortelli said.

People with concerns were also told that if the application advances, a petition with 25 signatures would trigger a public hearing at Stamford Government Center.

Of note is that in 2001 an application from Amboy was submitted for a mooring further south of the Weeks proposed location and was approved in 2005. Despite the approval it was never installed.

Commission member Paul Adelberg, who has had a mooring at Dolphin Cove for 30 years, said he was alarmed at the prospect of a mooring so close to small craft activity, which he said is growing in popularity.

According to the public notice of the meeting, anyone seeking more information about the application should contact Mooringinfo@weeksmarine.com or (908) 956-6810.

“Pre-Application” for Mooring in Stamford Waters Near Rocky Point Has Hackles Up in Greenwich May 26, 2019