First in a series based on interviews with Greenwich harbor master Ian MacMillan, Straight Poop, From the Poop Deck… 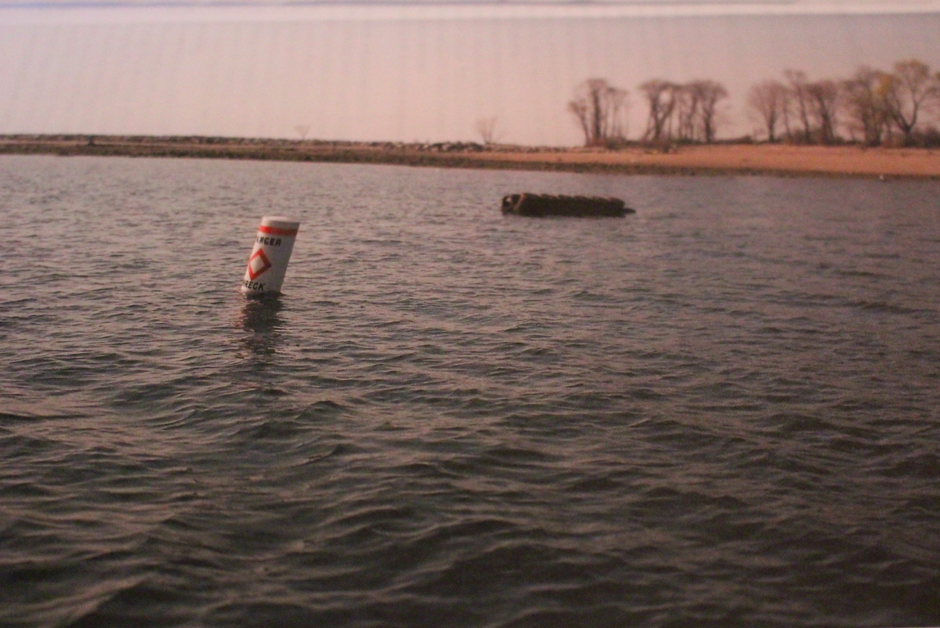 The wreck of the tug boat Kevin B off Captain’s Island is visible at low tide. It is a dangerous obstacle during high tide when it is not visible. The harbor master points out that the town set buoy does not have adequate ballast to keep it from traveling, which MacMillan points out is a hazard to boaters.

New Year’s Resolution No. 1.
Remove the wreck of the tugboat “Kevin B,” (the B stands for Buchanan).

The 80-ft tug, which had been towing barges in and out of Port Chester, and, is located just north of Great Captain’s Island in a pristine sandy area where boaters love to anchor and moor.

Macmillain said the wreck has been there since being run aground by the US Coast Guard in 1954, and burning down to the waterline, the event having been witnessed by Capt Henry Marx of Landfall Navigation (Stamford). Marx, who grew up in Byram, saw the tug on fire and witnessed the Coast Guard run it aground at its present location.

In 2013, Macmillan got a $15,000 estimate from Atlantic Marine out of Westerly RI, an operation which he said does quite a bit of work in Greenwich.

“They would pick with a crane the engine block and put it on a barge and then use clamshell buckets to remove the rest of the wreck and put the debris in 40 ft long dumpsters,” MacMillan said. “Then they would bring that to the dump in Stamford.”

The Greenwich Harbor Master said the town could even make some money on the salvage steel.

“It’s called pre-trinium steel because it was cast prior to 1945,” MacMillan explained. The Trinity atomic test explosion on July 16, 1945, south of Los Alamos, contributed to the tritium contamination of stainless steel after open atmosphere atomic explosion testing became common. “So it’s not polluted with trinium, a trace in all steels created after the Trinity explosion. That means you can use it to make medical devices as it has no trace trinium, he explained.

MacMillan wrote Ron Lalli (the Town’s risk manager) and Peter Tesei on Jan 30, 2013 issuing the order to have the wreck removed. Connecticut statute Sec 15-11a gives a harbor master authority to order the removal and taking of derelict vessels. “I’ve received no reply almost a year later,” MacMillan said.

“Everyone who’s been out there hates it. Every year people hit it. Every year there is damage. This past year two boats hit it in one weekend over 4th of July,” MacMillan said.

Macmillan said seldom do these boating accidents get reported. “They just go away and get it fixed,” he said.

MacMillan said that once the Town is on board with paying for the removal, the protocol for removing a wreck, would involve the DEEP issuing a permit.

“That’s what those fees are supposed to be paying for!” Macmillan said of the $200,000+ of mooring fees that have been collected by the Town over the course of several years.

“The most important thing is ‘Don’t get hurt.’ The idea that someone surface diving and clonking that with their head is ridiculous. Get it out of there. You want to get sued? It could be millions. Millions!

“We’ve had enough physical harm and tragedy in our waters. It’s time we consciously act on behalf of the boating public, and remove obstacles to navigation.” – Ian MacMillan, Greenwich Harbor Master on the wreck of the tugboat Kevin B

MacMillan explained that in the intervening years since the tug caught fire and burned down to the water line, the wreck has been picked clean. “People have removed portholes, bronze nails, propellers and so on,” he said.

These days at low tide it’s hard to miss the engine block from a 6 cylinder diesel engine (appears in photo) at low tide.

It’s danger is when it is under the water’s surface. “It’s dangerous to life and limb because it’s in a popular anchorage where people like to anchor and go swimming for the day,” MacMillan said. “My greatest fear is that someone will dive in and crack their head open landing on this engine block.”

New Year’s Resolution No.2
The town doesn’t deploy adequate ballast for the 19 buoys they service, according to MacMillan. Specifically, he pointed out that 4 buoys that mark the channel in the Old Greenwich Cove, and their sister buoys that mark wrecks, including Jake’s Reef, the sugar boat wreck and the Kevin B. have inadequate ballast.

“These are town deployed aids to navigation that have become hazards to navigation,” the harbor master said of the buoys that are set and tended to by the Town.

MacMillan describes the buoys as wandering about the Cove as they see fit, because they don’t have adequate anchors to stay on station.

As a result, MacMillan said the buoys tangle up with boats’ rudders and keels and foul them on numerous occasions. “This last year we’ve had to call mooring vendors in to untangle them and replace them in their proper stations, only to be moved again and again through natural occurrences,” he said.

“They’ve been putting in 75 lb pyramid anchors instead of 200 lb mushroom anchors. It’s more important for a buoy to have adequate ballast because they don’t have adequate scope,” he said referring to the length of the chain. “You don’t want to have a lot of anchor chain. So therefore you need more weight to keep it on that spot.”

MacMillan said that not only are navigational buoys grossly inadequate, but also the buoys that mark the wrecks.

New Year’s Resolution No. 3
The Harbor Master who receives no salary for his services — just a $500 stipend — would like to get reimbursed for expenses related to meeting the duties of harbor master.Specifically, MacMillan seeks reimbursement for his phone bill.

“I am accessible 100% of the time unlike anybody else in Greenwich government.  That letter from Gov. Malloy doesn’t say ‘Only weekends,’ he said, as he shared a letter dated Dec. 14, 2011 from Gov. Malloy appointing him as Greenwich Harbor Master.

“Pursuant to sections 4-1 and 15-1 of the CT gen’l statutes it’s my pleasure and privilege to appoint you as harbor master for the harbors and navigable waterways of Greenwich, to serve for a term ending June 30, 2104 or until a successor is appointed and has qualified, which ever is longer, in succession to Jonathan Asch.”

MacMillain noted that the Town of Greenwich website has his unlisted phone number and personal email address listed. “My phone service is unlimited text, email and voice,” he said. 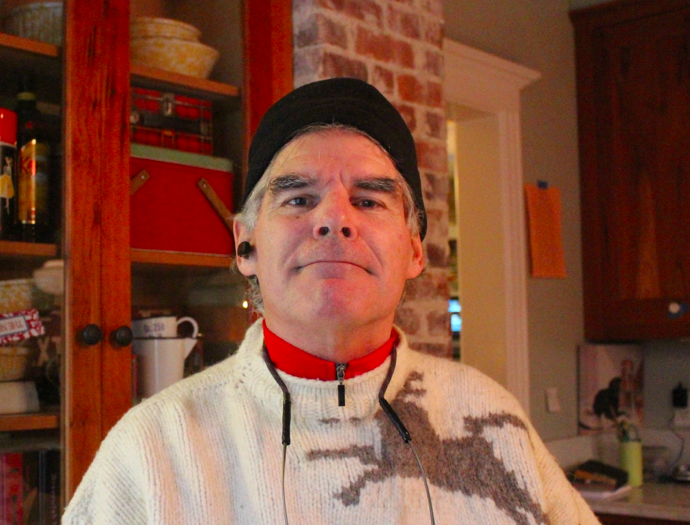 Note the Bluetooth earbud in MacMillan’s ear. “I bought it so I could be available to boating community even when I’m driving. Most of my work is done on the boat when both hands are busy or when I’m driving. If I’m at home, I’m using both of my hands typing.” – Ian MacMillan

Nov. 23 Tesei’s to Mazza: Live with the Arranged Marriage with Harbor Master