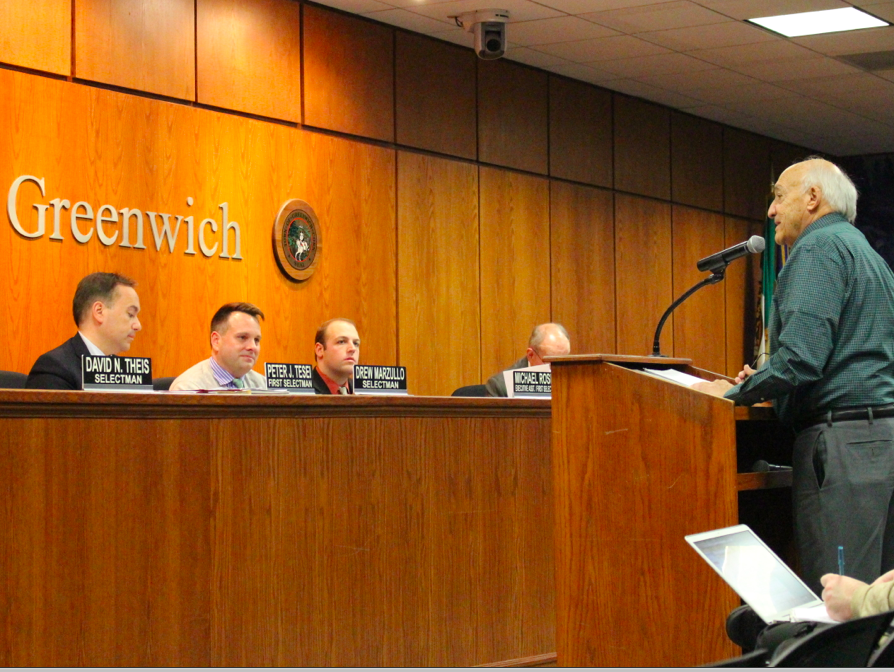 Appearing before the selectmen, Mazza, the chair of the Harbor Management Commission, appealed to the trio of selectmen to assert, or rather, re-assert their authority over Greenwich’s Harbors.

Mazza suggested the process would be straightforward and result in abrogating power from Ian MacMillan the current Harbor Master who was appointed by Democrat Governor Malloy.

Mazza said that back in 2009, the Town had handed over jurisdiction of the harbor to Parks & Rec by sending a short letter, which he read aloud. He suggested that the Selectmen could just as easily take it back.

With that, Mazza segued to a document prepared by attorney Bruce Angiolillo, a member of the HMC who lives in Old Greenwich and is a 20+ year member of the Rocky Point Club. “We’re saying that within the statutes, the control can revert to the Town,” Mazza said, summarizing Angiolillo’s document.

Selectman Dave Theis asked Mazza for clarification. “Who has the authority? The State or the Board of Selectmen, according to Attorney Angiolillo?”

Mazza replied, “The Board of Selectmen do, if they didn’t turn it over to the Harbor Master.”

At that point, Mr. Tesei intervened.

Pointing out that a previous director of Parks and Rec served a dual role as harbor master, the First Selectman noted that responsibilities had since been “bifurcated.”

“We’ve been trying to co-habitate harmoniously, and let’s face it, we haven’t been successful. …so we have parallel responsibilities.”

“It’s like an arranged marriage. You gotta make it work,” Tesei said to Mr. Mazza as MacMillan, the harbor master sat silently in the rear of the meeting room.

Loquacious outside Town Hall, MacMillan, who is known for answering to the earbud that is his 24/7 means of communication with the Greenwich boating community, did not speak during the meeting even as Tesei suggested the arranged marriage.

MacMillan was equally silent during Wednesday’s HMC meeting, where despite being an ex-officio member, he is not provided a seat at the table. In fact, on Wednesday, when he arrived to find no free chairs, he sat on the floor until a member of the audience opened the closet and found extra seats.

On Thursday, reached by phone, MacMillan summed up Wednesday night’s meeting. “Thank God for freedom of speech,” he said. “We’ve heard it all now.”

Tesei said the differences can’t be reconciled until the HMC completes a plan and has it approved locally and by the State.

“Let’s face it. This has consumed an inordinate amount of time. Can we just focus on the task of putting the plan together?” Tesei said.

Mazza said the plan won’t be done before the next boating season, with a rough estimate of the end of 2015.

Selectman Drew Marzullo lightened the moment. “Maybe by 2026?” he joked.