Voters have been waiting for the League of Women Voters Greenwich to announce a debate between candidates for the State Rep position in District 151.

This is the position previously held by Fred Camillo, who was sworn in as Greenwich First Selectman on Dec 1, 2019 and resigned as State Rep the next day.

On Thursday afternoon, the League of Women Voters, who have organized candidate debates in Greenwich for many years, issued a statement that a debate that would have taken place on Jan 16 between Harry Arora (R) and Cheryl Trepp Moss (D) would not take place.

In their statement, the LWV said they regretted the debate would not take place.

“The Arora campaign has rejected the League’s choice of Moderator and has insisted upon unacceptable conditions requiring the publication of her political affiliation,” the organization said in a release, adding that a LWV debate is defined by certain characteristics.

“The League sponsors the debate; ensures that the debate is nonpartisan from planning to conclusion, in conformity with the standards required by the IRS for our 501(c) 3 status; selects the moderator; and approves the format and rules governing debate, according to clear standards,” the statement continued.

The LWV said they understand candidates seek to present themselves and their policies and positions in the most positive light and they are happy to provide a forum for that to take place.

The LWV said the proposed Moderator, Kay Maxwell, is the former President of the League of Women Voters of the US.

“(She) has moderated debates in Connecticut for 30 years at all levels of government, including those for Governor, US Senate, House of Representatives, Mayor, First Selectman, Board of Education, etc. She has never been accused of being partisan,” the statement continued.

“To refuse to debate in a public forum moderated by a person of her qualifications is unjustifiable and indefensible,” the LWV concluded. 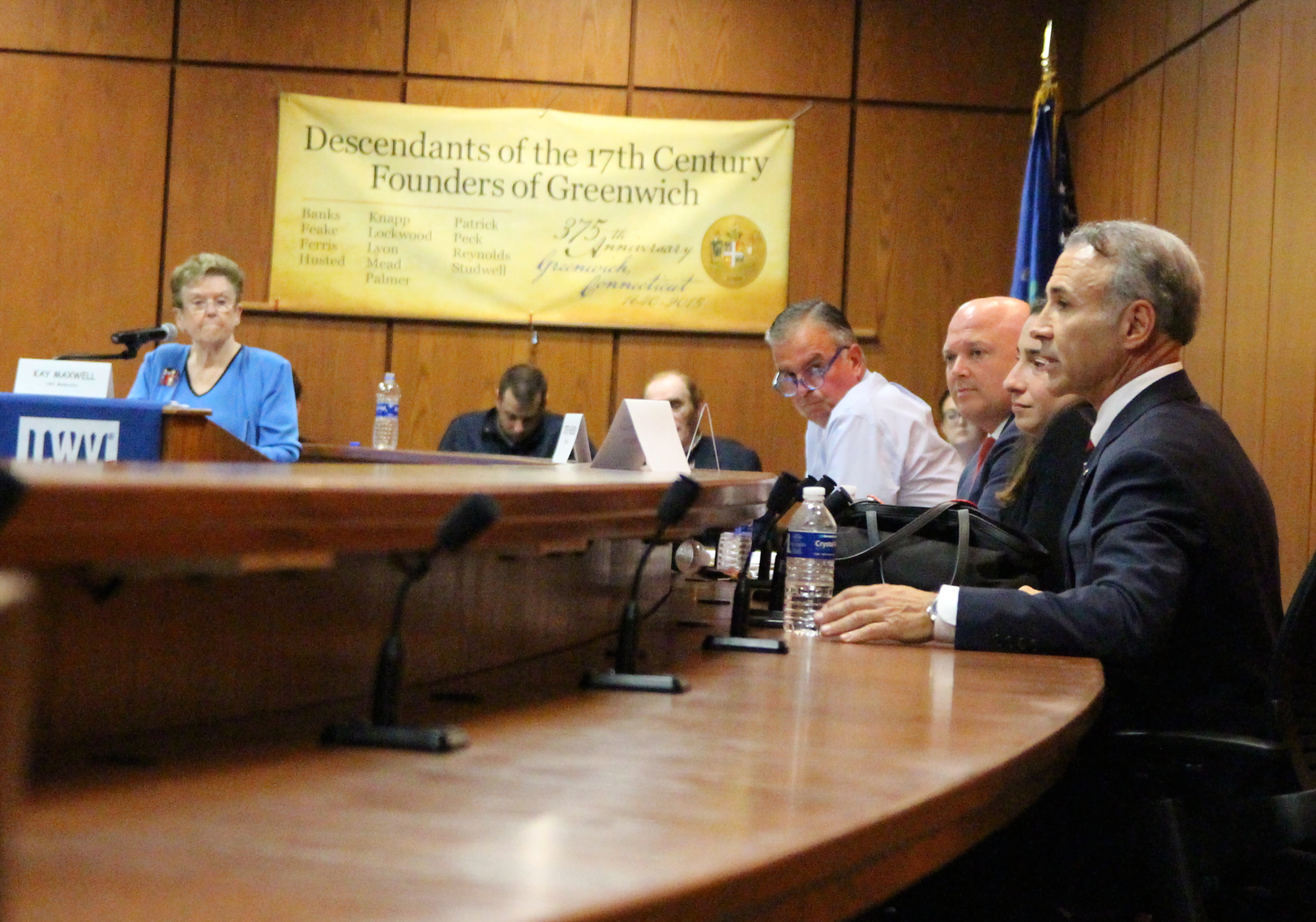 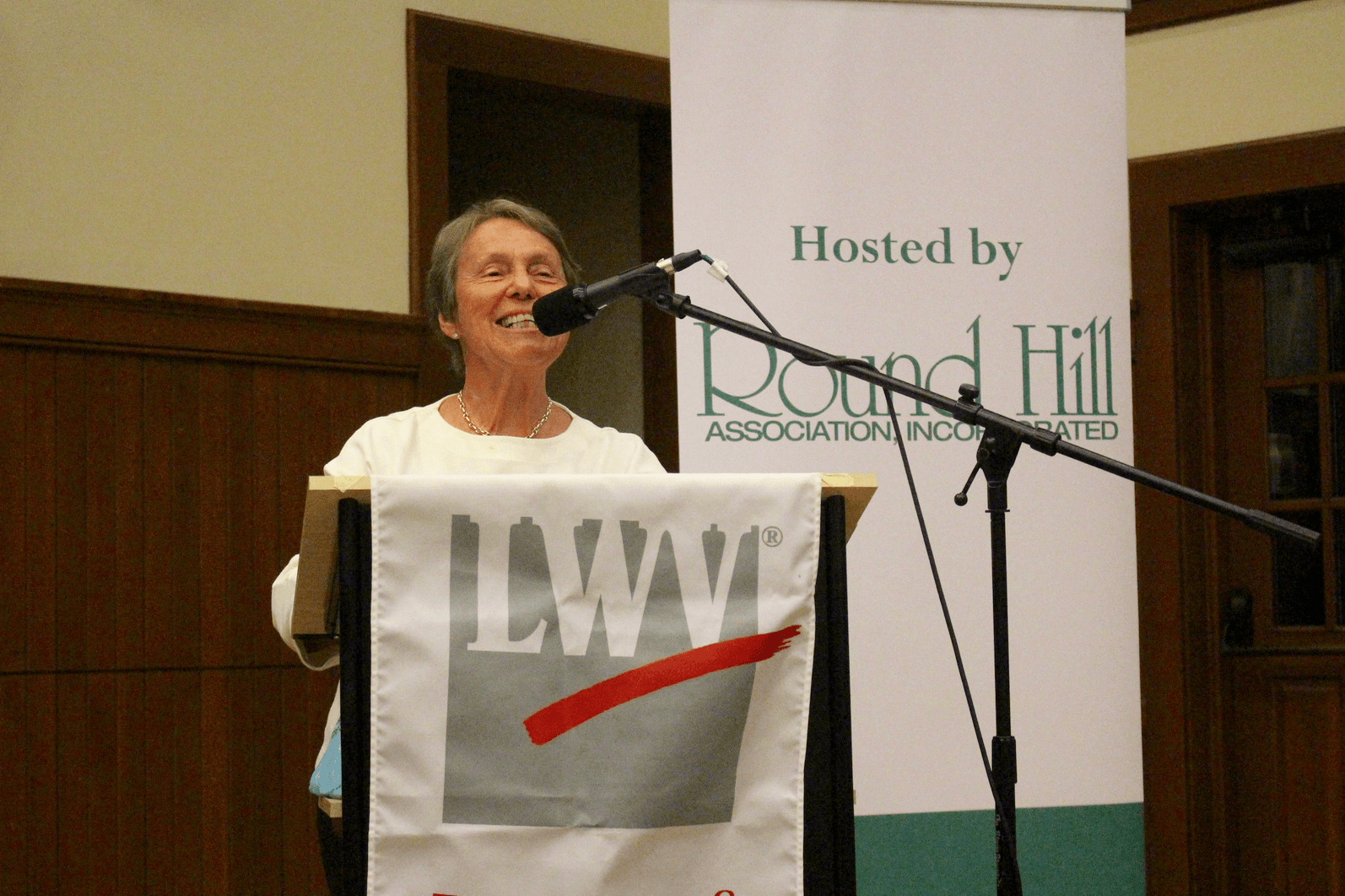 Jara Burnett of the League of Women Voters moderated a 2017 Selectmen debate at the Round Hill Community House. Oct 17, 2017 Photo: Leslie Yager

On October 11, the League of Women Voters hosted a debate between First Selectman candidates Jill Oberlander and Fred Camillo. Kaye Maxwell was the moderator.

A year earlier, at a packed debate between State Senator Scott Frantz and his challenger Alex Bergstein, also organized by the LWV, the moderator again was Kay Maxwell.

An October debate for all Selectmen candidates at the Round Hill Community House was moderated by Jara Burnett.

“The League had insisted that  the debate be moderated by registered Democrats (Jara Barnett or Kay Maxwell) and our only condition was that the moderator be someone who is independent and unaffiliated to either party,” she wrote. “Upon their insistence, we even agreed to a Democratic moderator as long the political affiliation of the moderator was stated and made transparent.”

She said the League refused to make the requested accommodation and cancelled the debate.

“We have reached out to other organizations and keep the date and time open to have the debate,” she added.

“I can’t comprehend why (Mr. Arora) camp feels they are uniquely in a position to doubt the LWV credentials and are entitled to dictate as to who should be the moderator.”

“I don’t care to know the moderator’s political affiliation,” she added. “And it’s not appropriate for anyone to demand one party or another. The League is a 100 year old non-partisan organization whose sole mission is civic engagement. They always run fair and informative debates. And I deferred to the League entirely to choose the moderator they want.”

At the December BOE meeting superintendent Toni Jones said the election would fall on a regular school day even though the polling stations are located in public schools.

“We are in school. We have messaged staff and parents working with election board and police to make sure are comfortable,” she said. “It’s only a third of voters. There are eight sites and police will put a person at each polling station. We feel comfortable with that.”