UPDATE: This story has been updated to reflect that the charter change committee was appointed by the Board of Selectmen at its July 14, 2016 meeting, not by First Selectman, Peter Tesei.

According to the meeting minutes, at the conclusion of the vote, the lone Democratic selectman Drew Marzullo described the vote as “a sham.”

Other than the nomination of Joan Caldwell to chair the committee, whom all 3 Selectmen voted for and who has since died, votes on nominees were not unanimous. (See below from July 14 meeting minutes).

During Thursday night’s Board of Education meeting at Glenville School, over 45 speakers took advantage of their three minutes to voice their opinions on the proposal from the BOE First Selectman’s charter change committee.

The controversy started after Greenwich Selectmen* appointed the committee to look at the way the Board of Education members are elected. 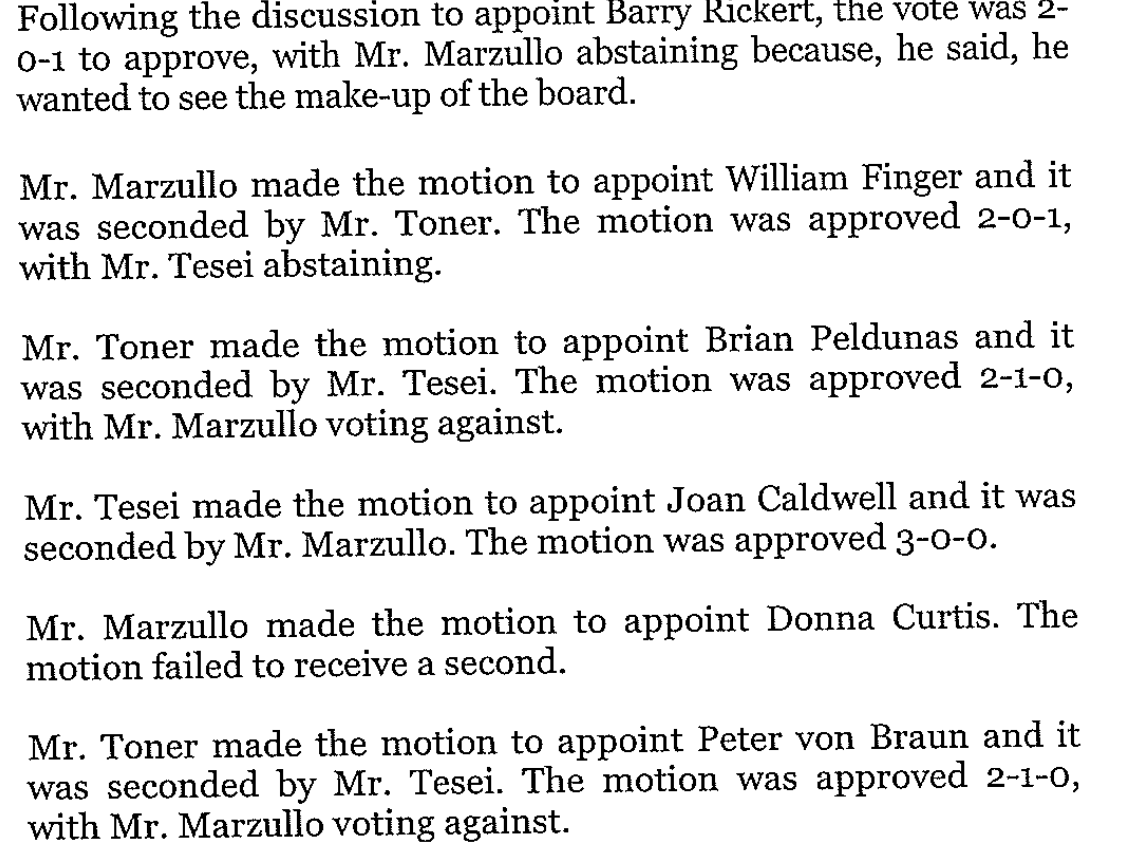 Greenwich is one of only four in state where individual parties are guaranteed an even number of seats, and elect members for four-years terms. The recommendation of the committee, would mean expanding the board so that one party could potentially hold a majority, though there was a dissenting opinion written by Bill Finger.

Those opposed argued the change would guarantee the board would be controlled by Republicans and that they preferred a balanced board with an equal number of members from each party.

With so many speakers during the public hearing, the meeting didn’t end until after 1:00am.

On Friday morning on WGCH 1490am, Board of Education chair Peter Sherr said that any changes to RTM, BOS and BET are required to go to referendum, and that the potential BOE change might be handled likewise, or decided by another body.

“You could recognize a who’s who of party operatives on both sides – pro and con on this thing. It was quite a political evening.” – Peter Sherr, BOE chair

In any event, although the Board of Education has no legal role in the decision under the town charter, they did come up with a “sense of the meeting resolution.”

The Board of Education voted 6-2 to reject the proposal. 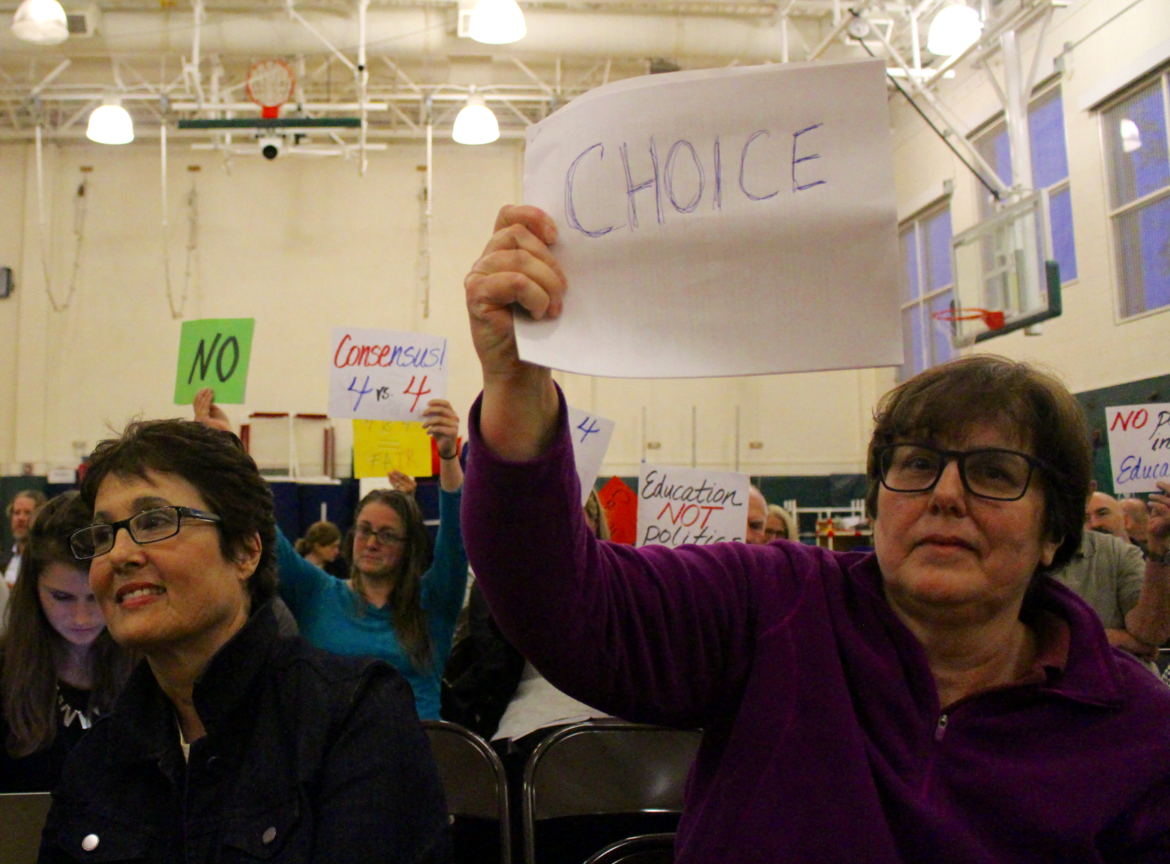 Democrats and Republicans had strong opinions on the BOE Charter Change proposal during the May 25, Board of Education meeting at Glenville School. Photo: Julia Moch

Beyond that, on the question from the Board of Selectmen as to whether change might be decided by referendum, Sherr reported that a majority of board members didn’t even want to take up that question, and a motion was made to table it.

On Friday morning Jeff Ramer, head of the DTC said that there was a large turnout of Democrats and their sympathizers who spike against the proposal during the public hearing.

Ramer said Mr. Tesei’s objective is to mandate a Republican majority on the Board of Education, “tossing out a century old tradition of bipartisanship.”

“We can understand the First Selectman’s desire to fatten his power and the power of his Party,” Ramer continued. “However, he should not have been surprised that the Board of Education threw it back in his face last night, by an overwhelming (and bipartisan) 6-2 vote.” 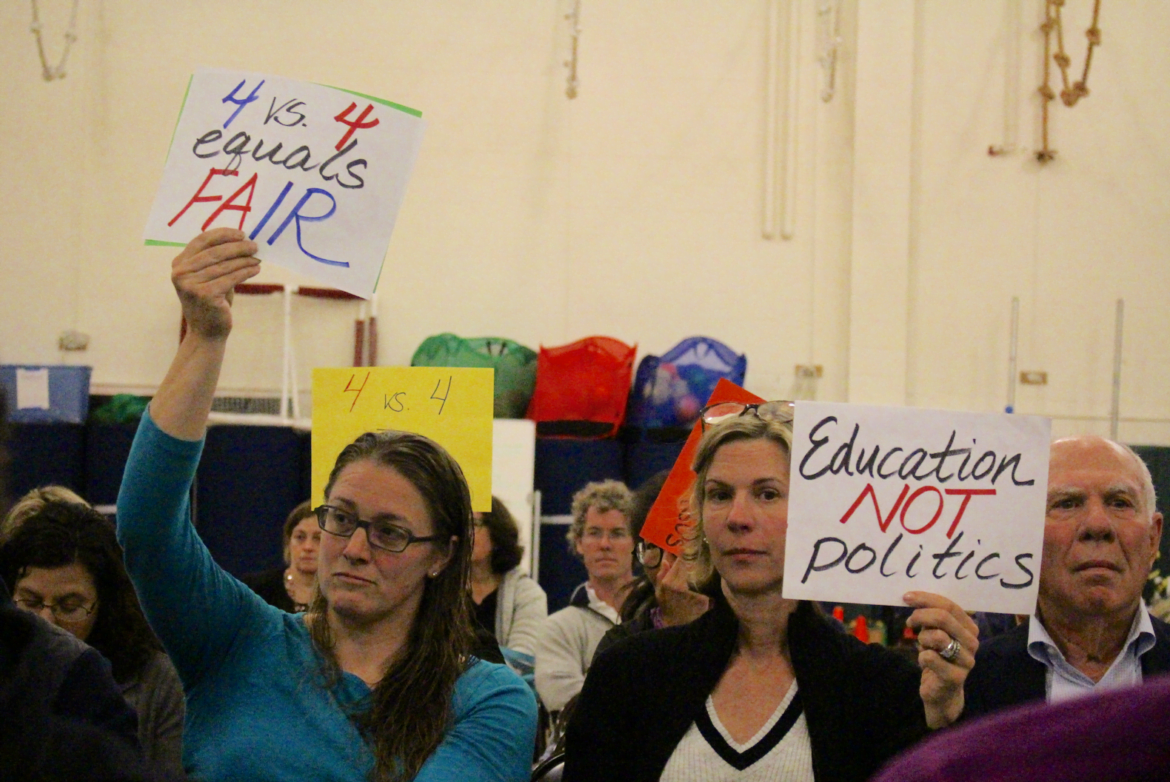 Many Democrats turned out with signs “4 vs 4 equals Fair” and “Education, Not Politics,” to express their opposition to the BOE Charter Revision proposal. May 25, 2017 Photo: Julia Moch