Board of Education member, Peter Bernstein, a Republican who has vocally opposed a possible education charter change that would allow members of one political party to hold 5 out of 8 seats, instead of the longtime rule of 4 from each party, this week found himself booted off the Republican slate.

At this week’s RTC meeting, the committee nominated incumbent Peter Sherr, who was selected as chair by the Republican dominated Board of Selectmen in December 2016 in an unprecedented vote, following several unsuccessful votes by the Board of Education. The RTC also selected newcomer Jason Auerbach, a public school father from the east side of town, leaving no spot for incumbent Bernstein.

Still, Bernstein has no plans to walk away.

Like fellow Republican Peter Sherr and  Democrat Laura Erickson both did, he is petitioning his way onto the ballot.

On Friday morning Bernstein was on the Metro-North train station platform seeking signatures for his petition. He said it was the first of many in his efforts. He has a full schedule of stops this week, including visits to the beach and the dump.

Peter Bernstein has a busy schedule in his effort to petition onto the ballot after being denied RTC nomination. Stops will include train stations, the beach and the dump.

While the November election is barely on the radar of most Greenwich residents, Bernstein must make quick work of obtaining hundreds of signatures.

“I have until Aug 9 to collect 637 signatures,” he said on Friday morning as he paced the Metro North Greenwich train station platform with his clipboard.

The number of signatures represents 5% of the registered Republicans, which Bernstein pointed out might have been higher if hundreds of Republicans hadn’t defected since the election of Donald Trump.

Bernstein, who has a rising 5th grader at Julian Curtiss School and another at Central Middle School, works full time as an attorney for MasterCard. He said his employer has been “amazingly supportive” of his participation on the BOE. In fact, he is the only attorney on the Board, which he pointed out adds value.

“I have served on the negotiations committee and was instrumental in contract negotiations, saving the town millions of dollars by moving the teachers to the state health plan, a model that the rest of the town is following.” Bernstein has also served on the policy and governance committee, which makes sure that the district is in compliance with state and federal laws and regulations.

The petition process is not like run of the mill. Only registered Republicans can collect signatures. “It’s the middle of summer and people are away,” Bernstein said.

Anyone seeking to help Bernstein circulate his petition must go to the registrar’s office at town hall during  business hours and be certified. From there, each petition only contains 20 signature lines.

The Registrar’s office will disqualify signatures that don’t meet strict criteria.  For example, one man signed the petition Friday morning and was almost done with his address, getting as far as Brook instead of Brookside before he had to hop his train. Bernstein said that probably be disqualified.

With an uphill battle ahead of him, Bernstein, explained why he will persevere with his petition.

“We’re already losing two members on the Democrats’ side,” he said, referring to Laura Erickson and Debbie Appelbaum. (The DTC nominated Kathleen Stowe and Meghan Olsson for the two available seats). “Just seeing the groundwork from the last four years start to pay off significantly, now is not the time to take our foot off the gas. Just look to the recent test scores to see we have improved across the board.”

Bernstein referred to what he called RTC hypocrisy in nominating a newbie over himself. Especially he said after they had embraced competition previously.

Bernstein pointed out that Mr. Sherr petitioned his way onto the ballot himself.

“Peter Sherr has politicized and polarized the work that we do and has added an element that is not conducive to our primary mission, which is achievement for all our students.”  – Peter Bernstein

Mr. Sherr addressed the RMA on Wednesday despite guidelines prohibiting a candidate from speaking in such a manner within six months of an election, though he did not mention charter change during his talk.

“I’m not a political animal,” Bernstein said. “Education should not be a political issue. We should all be able to debate the importance of educating our students for the future.”

As for charter change, Bernstein said it has little to do with voter choice.

“I find no merit in the so-called Glastonbury recommendation and find it to be anti-democratic – with a small D,” Bernstein said, adding that it seemed support of charter change served a litmus test for nomination.

“And let’s be clear, this would be a Republican party majority as Republicans far outnumber Democrats in town in not just registered voters, but in people who actually turn up to vote,” he said. “Completely disenfranchised are unaffiliated or independent voters as no one I’ve spoken with can recall an unaffiliated person elected to the Board of Education. The reality is that there are more unaffiliated voters in town than either registered Republicans or Democrats.”

“They’ll only select members who toe the line,” he said of the RTC. “I’m responsible and accountable to the voters of Greenwich.”

“The decision to go from three BOE candidates from two was made at an RTC meeting this week when only 57 people voted on who should be on the ballot,” Bernstein continued. “That is less than one half of one percent of the registered Republicans in Town.”

Also, Bernstein said the meeting was was not publicized.

“This was done in the dark, with 57 people deciding at 11:30pm who should represent the town. They just demonstrated that this is all about accountability to the RTC and not to the voters,” he said.

As for being passed over in favor of a newcomer Jason Auerbach, Bernstein sees some irony.

“Four years ago these people advocated for three candidates which failed, forcing Peter Sherr to petition onto the ballot.

Now the RTC is only interested in nominating two candidates in a time they are talking about voter choice!” – Peter Bernstein, petitioning to be added to the ballot in order to earn a second term

“Peter Sherr has already been on the Board for eight years and another term puts him at an even dozen, giving him plenty of opportunity to have moved the needle and make him the constant through the superintendent turmoil,” Bernstein said. “He has been a polarizing figure at times, while at other times, he has been quite capable of working with others in our caucus.”

As for nomination of a candidate to effectively bump him from his post, Bernstein said he believed it was retaliation for his opposition to BOE charter change.

At the May 25 public hearing, 45 people signed up to speak during public hearing, resulting in the meeting not ending until 1:00am. During the hearing, which can be viewed online on Vimeo, people spoke passionately on both sides, but more speakers spoke against charter change than in favor.

Democrats and Republicans had strong opinions on the BOE Charter Change proposal during the May 25, Board of Education meeting at Glenville School. Photo: Julia Moch 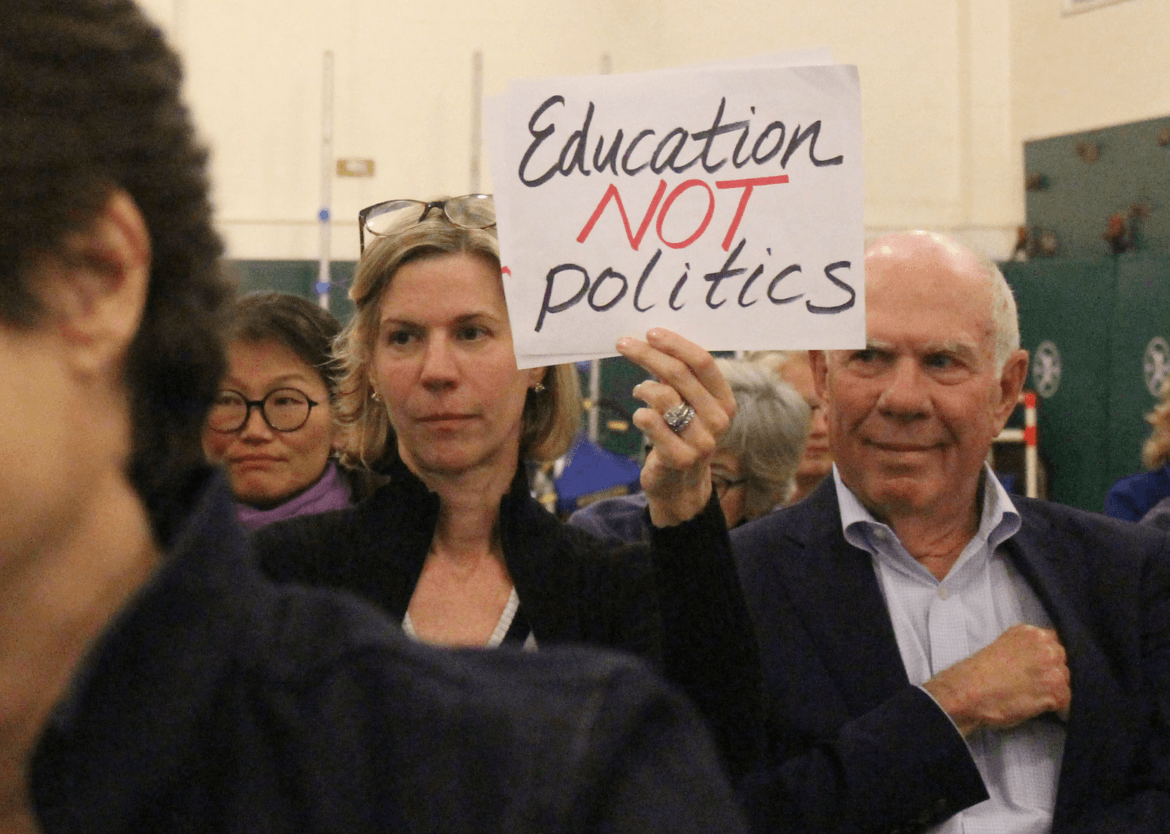 Sandy Litvack and his wife Joanna Swomley with a sign indicating opposition to BOE charter change. May 25, 2017 Photo: Leslie Yager

“I don’t know Jason as well, as he rarely attends full Board of Education meetings,” Bernstein said, adding that Auerbach only attended during the public comments, which occur at the beginning of meetings. “He didn’t stay for the business portion of our meetings.”

The previous two Board of Education chairs had positive comments regarding Mr. Bernstein.

Former BOE chair Barbara O’Neil, said in an email on Friday, “Peter is an experienced and knowledgeable Board member as well as an independent thinker with an ability to see issues from many sides. His skills as a lawyer are invaluable to the proper functioning of the Board.”

Mr. Bernstein’s Democratic colleague on the board, Laura Erickson, who is not seeking another term, said she was surprised to hear the BOE outcome at the RTC convention on Tuesday night.

In an email on Friday morning, Mrs. Erickson said she was pleased to hear Bernstein is seeking the alternate path to get on the ballot, giving voters choices.

“The punitive nature of the RTC vote to toss Peter Bernstein off because of his vote against making a BOE charter change – which failed to gain BOE support by a vote of 2-6 because it would not be in the best interest of Greenwich public education – is truly alarming,” she said.  “And why is the RTC repeating the same mistake that it made in 2013?  Not renominating Peter Sherr for voting Leslie Moriarty (a Democrat) as Chair was also a bad move.  I supported Bernstein’s right to petition just as I did Sherr back in 2013.”

Erickson said that to cast a vote on merits is not being a “maverick.” Rather, she said, “It’s putting your constituents ahead of partisan interests.”