February ushered in another win for the GHS boys hockey team. With a 6-1 victory against the Iona Prep Gaels on Thursday, the Cardinals brought their record to 10 wins and 2 losses (losses to Darien and Xavier).

Hamill Rink boasts great ice. Longtime rink manager Rich Ernye hears from college players who come back year after year and say the rink has the best ice around. Not too hard. Not too soft. 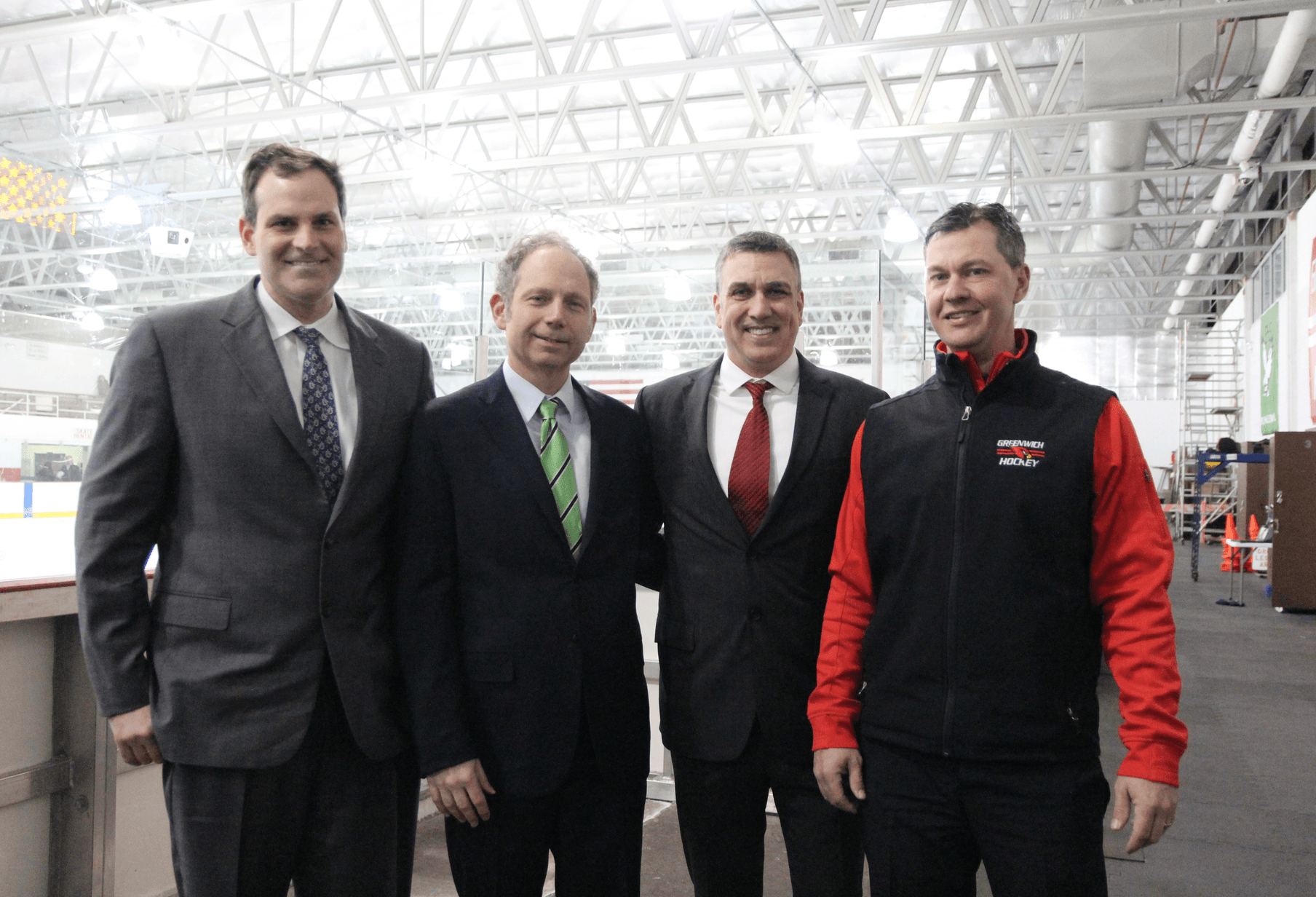 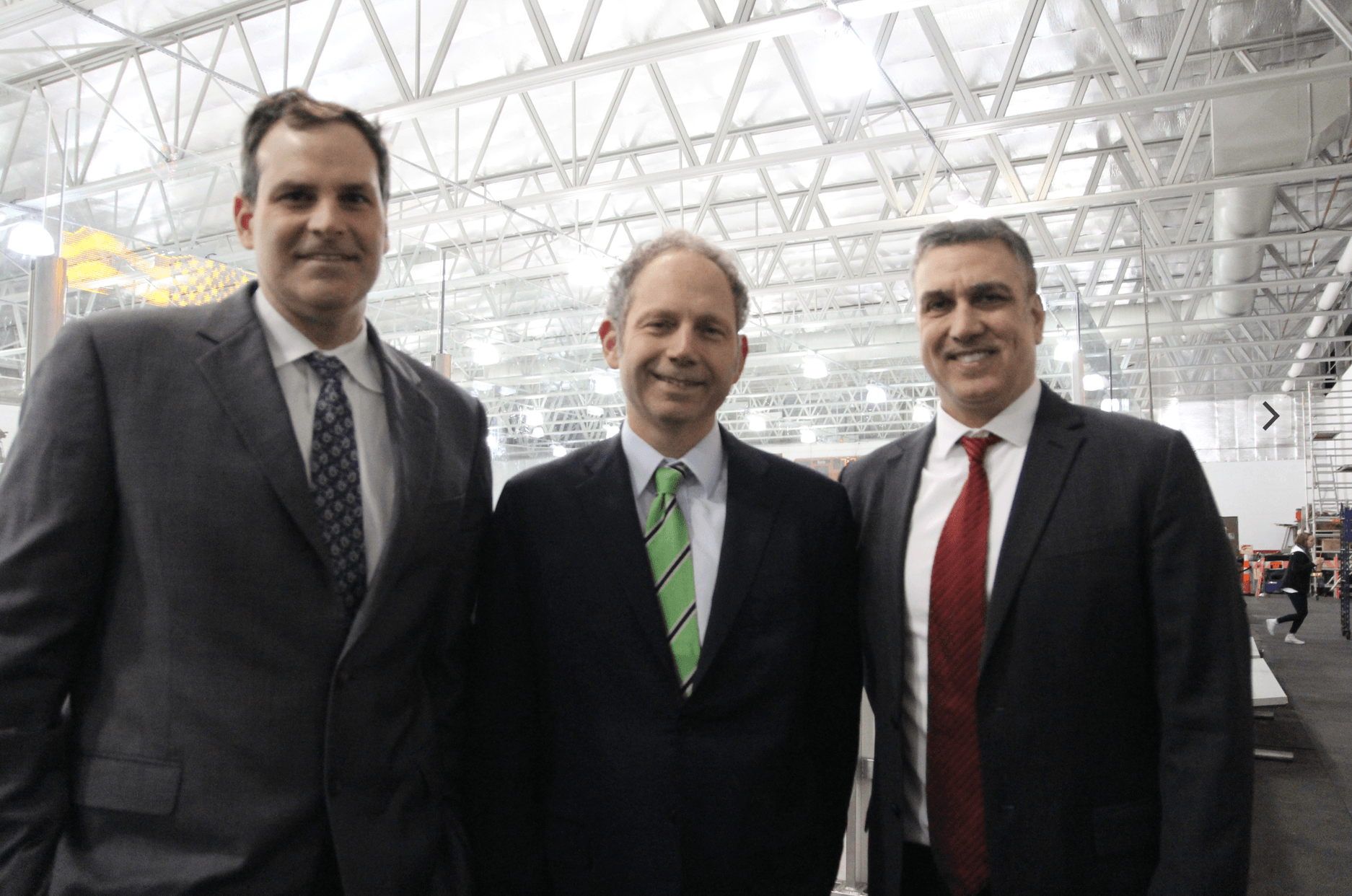 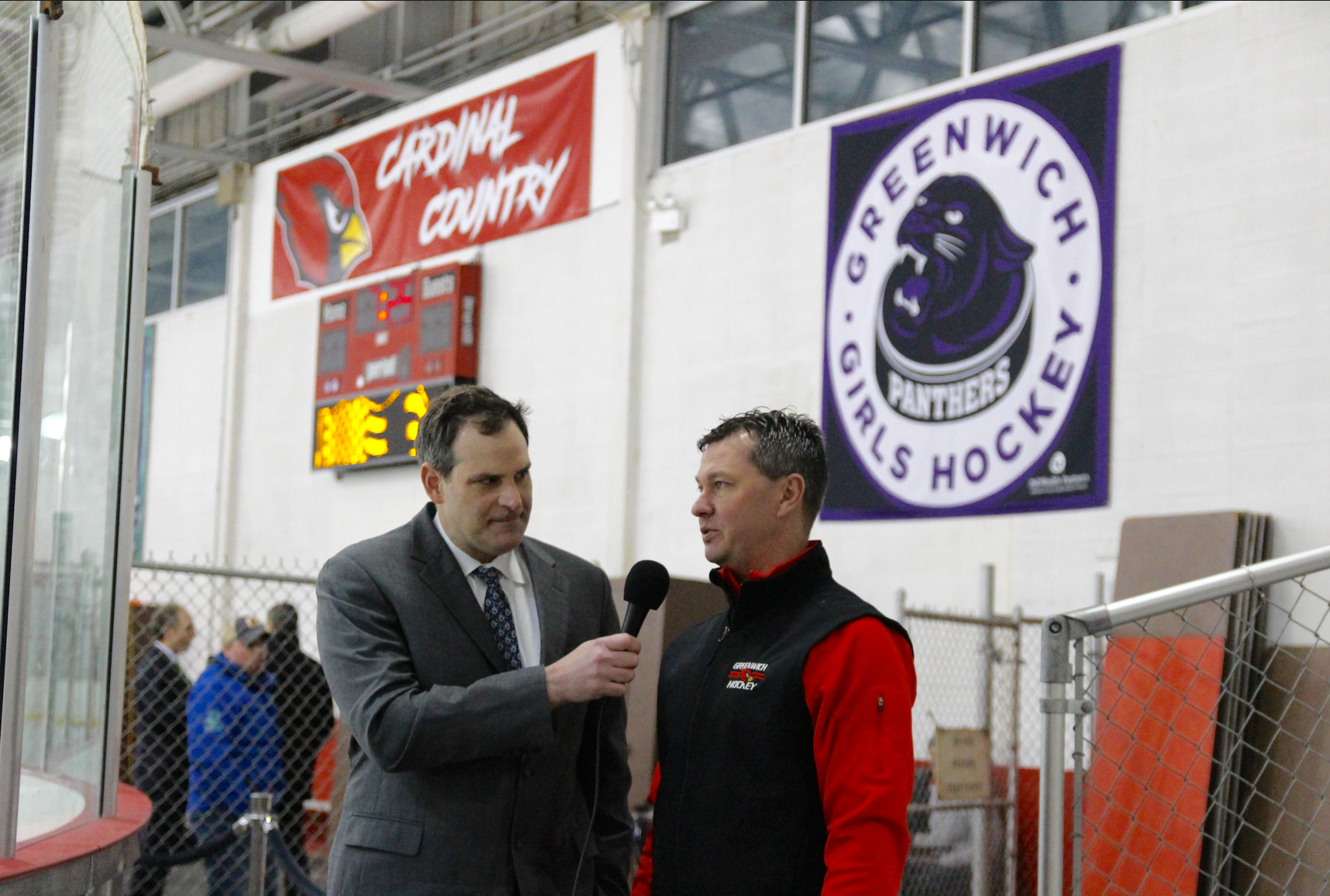 While nostalgia is fun, and the vintage photos inside the rink entrance draw  admirers, Hamill rink was disadvantaged from its start.

Originally an open air rink fashioned atop a slab, bleachers and a roof were added later. McGuyver would have been proud the day the bleachers were lifted and heated rooms added underneath to house skate rentals, an office, a meeting room, and locker rooms, because until the late 90s skaters changed inside tents.

Not to beat a dead horse, but the rink is desperately in need of modernization. There is a single bathroom shared by players, officials, rink staff, fans and police. There are no showers and the rink remains several feet short of regulation.

While hockey has become a year round sport, Hamill rink has no insulation. Nor is there heat or air conditioning. Each spring the ice is melted and rolls of green turf are unfurled, extending the rink’s use through the summer. But as the temperature soars outside, so it does inside. Since there is no foyer or vestibule to serve as a buffer from the elements, the temperature in the rink mirrors the temperature outside. In the summer soccer, t-ball, flag football and lacrosse are played on turf in the rink.

“It’s a year-round sport, so when the season ends, the kids find other opportunities. …That way, when the season starts, they’re fresh,” Fulton said.  “We could support year round ice.”

While Hamill Rink has been passed over for replacement, hockey in Fairfield County has soared in popularity in the past 20 years.

“It used to be there was only one option in Greenwich and it was Dorothy Hamill Rink,” said hockey devotee Rich Fulton, who has coached youth teams and has teens in the Cardinals hockey program.

“Now there’s Terry Connors, Chelsea Piers, Stamford Twin Rinks and Two Sheets in Shelton,”Fulton continued. “At Chelsea Piers, the CT Junior Rangers added a team at every age group, and they still don’t have enough ice. Brunswick used to use Hamill, now they have their own rink.”

While demand has increased Hamill Rink has remained frozen in time.

Success Despite Adversity
Not unlike the Cardinals football team who soared under the leadership of John Marinelli despite lack of illuminated fields to practice and play on – and a reliance on port-o-potties – the hockey team also has a stellar coach in Chris Rurak.

“Both coaches have both made a old stodgy program exciting,” said Fulton.

“I want these kids to have the best high school experience they can,” said Rurak who became head coach last year. “I’m trying to create an atmosphere where my team can feel it’s competitive to a Division 1 college.”

Rurak is building the hockey program with the goal of attracting talent and  winning state championships. While there are kids who come up through the ranks of local hockey leagues, when they get to high school they are too often lured away by the Junior NY Rangers or the CT Oilers.

“There was a stigma that this wasn’t a professionally run program,” Rurak said. But that has changed.

Fans and supporters of Cardinals Hockey have beefed up the program with a new game announcer in the form of five-time Emmy Award winner, Rob Burnett, best known as executive producer of the Late Show with David Letterman.

“We got a first class announcer in Rob Burnett. It’s special because of his professionalism,” Rurak said.

Not only does Burnett lend star power to the program, but through the generosity of sponsors, the games are live streamed on LocalLive, where they are also permanently archived.

Fulton said when he and other supporters, many who are part of the Greenwich Athletic Foundation, learned that the Darien Blue Wave has their games professionally taped and archived, they got to work.

“The Darien Athletic Foundation struck a deal with HAN network. They have archives of hundreds of games. They’re taping everything,” Fulton said. “That’s modern day recruiting. If you’re a coach and want to check out a player, you can go to a game or go to a website.”

Fulton said the GAF connected with a LiveLocal, and games are now streamed and archived courtesy of local sponsors. The results are very professional and there is no app required. Here are the GHS sports broadcasts.

“It’s great,” Rurak said. “The boys’ high school years are documented forever. I wish I would have had that to look back on.”

A highlight of Thursday’s game comes at the 40 minutes 20 seconds mark in the form of “Ask a Cardinal.” In a simple but compelling concept, Burnett rapid fire quizzes members of the hockey team about each other.

Burnett, who introduces himself as ‘the voice of cardinal hockey,’ joking that the nickname was one he gave to himself gives a nod to Hamill Rink:  “Some call it a rink. Some call it an arena, but everybody calls it Cardinal country,” he said at the start of the game.

Burnett, joined by Andy Boer and Chris Jones, are a fun trio to follow as they commentate on Cardinals hockey games. Another highlight of the LocalLive game coverage is an interview of Coach Rurak by Chris Jones.

“They do a lot with a little and deserve kudos. They do it because they love it,” Fulton said.

Fulton said the combination of a charismatic head coach and efforts on the part of Cardinals hockey supporters and the GAF, are making a difference.

“The common denominator among all involved is friendship,” Fulton said. “We’re all buddies and friends. Our kids grew up playing hockey together. We don’t like it when we coach them from when they’re 5 and 6 year old’s, and then they get to GHS and feel like there is a better opportunity elsewhere.”

“If Greenwich was able to keep all its hockey players in town – either public or private – we’d be one of the greatest hockey towns in the country.

I kid you not! We want the path to go through GHS and its home rink.” – Richard Fulton

Just before Thursday’s game, Coach Rurak said the GHS hockey team is hanging onto players who might otherwise join the Jr Rangers or CT Oilers.

“We’re getting media attention, live game coverage and improvements like the new sound system donated by the Greenwich Athletic Foundation,” he said with a nod to the giant sound system pendant that descents from the rafters.

The GAF donated $17,000 to purchase and install the state-of-the-art audio system last summer. Previously they donated $110,000 for new bleachers for the Greenwich High School gym.

“It is so much fun to see the players and the crowd respond to the music that can now be heard through the rink,” said Lee Milazzo who has been involved in fundraising for the new audio system.

“If we create a great atmosphere, a better facility, and archive, they’ll stay, get the looks, and stay in town,” he said.

The Greenwich varsity ice hockey team has a home conference game vs. Warde/Ludlowe on Thursday, February 15 at 5:30p in Greenwich at Hamill Rink. 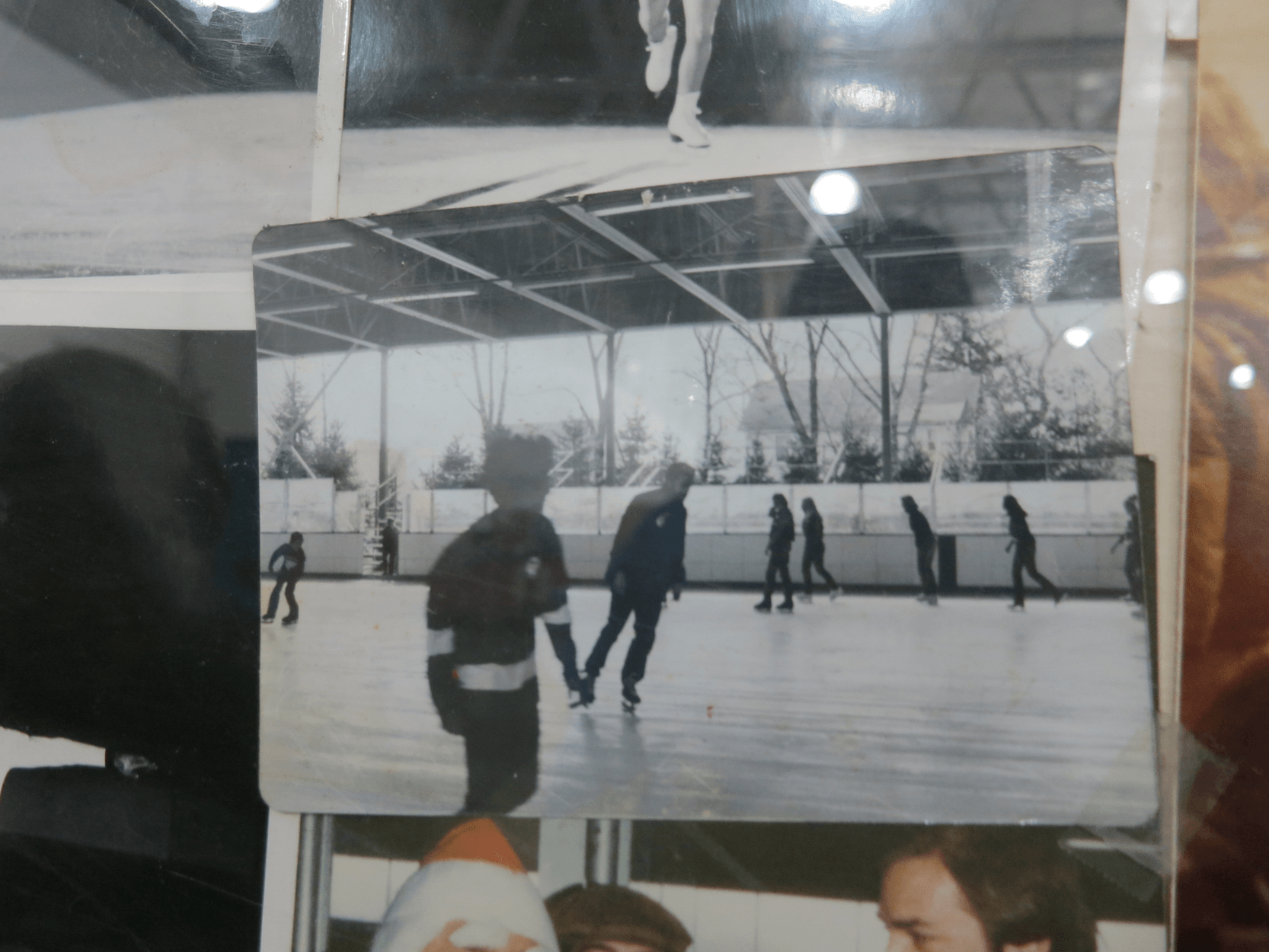 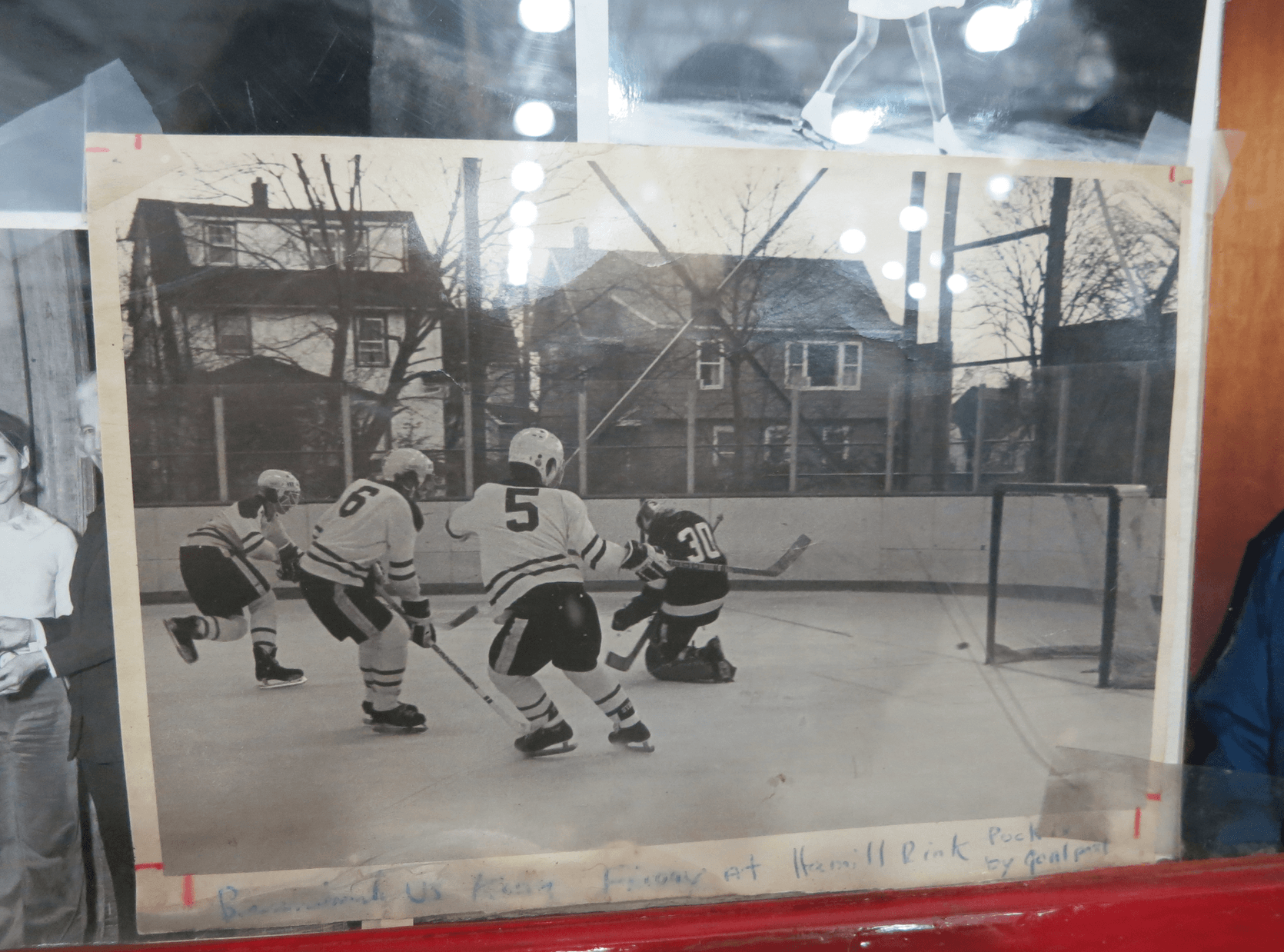 Hamill Rink evolved from an open air rink built on a slab by the old Byram School in 1971. This black and white photo is on the wall inside the rink.