The application was submitted before a moratorium was imposed.

Previously the ARC reviewed the application in August and reacted negatively, with Heidi Brake Smith calling it “just a box.” 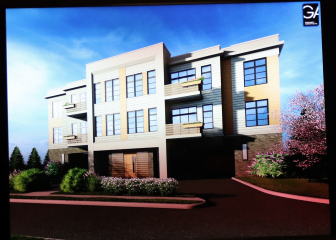 In November, the applicant came before P&Z with revised renderings incorporating ARC feedback, but it was still not well received by the commissioners.

This week the applicant was praised for their redesign.

Gone is the flat roof. Gone is access via Neil Lane.

Also the applicant eliminated the full curb cut, and added landscaping and grass.

The commission pushed  the applicant to consider excavation for underground parking, and to reduce the number of units to 18, with 15 at market rate and 3 for moderate income. 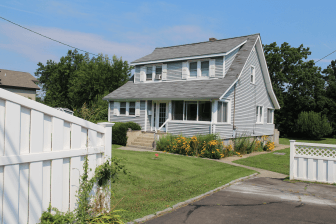 If a proposed 20 unit apartment building is approved it would replace an existing 1,491 sq ft house at 1205 East Putnam Ave, built in 1900. Photo: Leslie Yager

Attorney for the applicant Chip Haslun said underground parking was not feasible.

He also said residents in the 20 units would not generate enough trips to impact the existing conditions, a point which residents vehemently objected to during pubic comment.

Richard Cleary, a resident of Park Place said Neil Lane could not handle the increased traffic. “The intersection at McDonald’s is the worse intersection in town. The traffic studies are worthless.”

“You should throw this proposal out,” said Stacey Cleary. “The traffic at that intersection is insane as it is. Forty more vehicles does not make sense.”

“Look what just happened in Old Greenwich,” she said, referring to the pedestrian who was hit by a car and died a week later.

Still Haslun said traffic counts had been taken on a Thursday and Saturday and the study was done pursuant to Institute of Transportation Engineers standards.

Commissioners continued to press the applicant on underground parking which would bring the building down in height.

“It’s a matter of geometry,” said commissioner Hardman. “The development proposed at Sheephill Rd successfully incorporated subterranean parking. There’s ways to skin this cat and not every parking space needs to be below ground.” 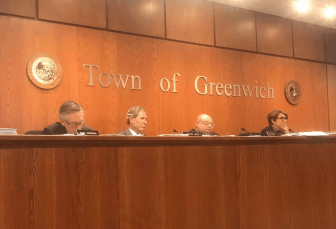 Still, Hardman said the key problem with the building remained its sheer bulk.

“This is an 80% increase in FAR,” Hardman added, referring to the possible incentive offered by 6-110. “It’s worth making it attractive to the neighborhood.”

The applicant’s civil engineer Charlie Mills said it would be a challenge to comply with the town drainage manual and create underground parking, but that no soil tests have been done.

“If you can’t get enough parking below grade, perhaps the building simply has to be smaller and have fewer units,” Mr. Hardman said.

“You are saying if we move the building down, it will impact the drainage, but nobody has even dug a hole yet?” Mr. Macri asked.

Mr. Macri said to fit in with the nearby buildings, the building’s first floor should be at grade, and that the massing of the building remained “overwhelming.”

Mr. Haslun said his client was reluctant to excavate. He talked about eliminating the half story at the top of the building, adding a false gable around the top to gain recreation space, and reducing the number of units.

“No that’s not adequate,” Mr. Hardman said. “Much more can be done. It’s a tremendous increase in FAR. An 80% increase and for that the community, Riverside in particular, should have something more in keeping with the scale.”

Hardman suggested reducing FAR from .9 to .5, but Mr. Haslun said that would kill the entire project.

“One more time for the record, more work can be done,” Hardman said. “You have a smart development team. Show us some other alternatives that reduce height and bulk.”

The commission noted that the 20% formula does not guarantee .9FAR, but rather up to .9FAR.

“You aware you got in underneath the moratorium?” Dennis Yeskey said. “This is coming in before the moratorium because this is the exact issue we have. It’s four units. I’m not sure it’s worth it.”

“Is it a non starter if we can’t put the parking under ground?” Haslun asked.

“It’s for your engineer to figure out,” Hardman said. “There are creative solutions that will make this viable and attractive to the community.”

Mr. Yeskey said he’d be happier if the building was reduced to maybe .7FAR.

The applicant’s engineer Charlie Mills repeated that he was worried about drainage and hitting ledge. “I’m looking at it from the point of view of the neighbors,” he said. “This is a big building because of the incentives. It may not be possible to support underground parking on this site because it’s level.”

Ms. DeLuca asked if the applicant to consider fewer units.

Toth said he and his partner had done their homework on the number of market rate units and affordable units. “Otherwise we have to seek other applications,” he said.

“We have the number of units we want to accomplish,” Toth said. “Land is expensive in Greenwich.”

“You have all these incentives, and you push back. There is an 8-30g,” Toth warned, referring to the state statute for affordable housing, that exempts developers from local zoning regulations.

“Property is expensive. You have to have a certain rent roll,” Toth said.

Still the commission continued to push for a smaller building with underground parking.

Commission chair Margarita Alban said ground level parking under a building is common in Stamford or Port Chester, not Greenwich. 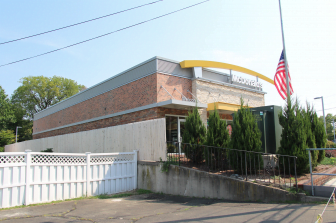 1205 East Putnam Avenue is between McDonald’s by Exit 5 and Pet Pantry in Riverside. Photo: Leslie Yager

During public comment residents said even without direct egress to Neil Lane, tenants would loop around to Neil Lane to get on I-95 anyway.

There was also the comment that McDonald’s patrons will park there.

Judy Forstbauer, who lives on Neil Lane behind the proposed building, said the rendering of the building did not reflect its surroundings. “If it did, you’d see little buildings all around it. This will stand out.”

“This space is for an Airbus, not a jumbo jet. How could we consider putting a jumbo jet in this space?” Mrs. Forstbauer asked. “It’s a zoo over there with the shopping center. …To do all the damage it will do, it’s crazy. This needs a lot more consideration.”

Don Conway said, “You achieved underground parking on Sheephill Road, which is even lower. …You can get rid of water. You can bury the parking and only have two stories. That keeps the place looking residential.”

Joseph Smith of Griffith Rd said having a 20-unit apartment building would be devastating to community character and contradict the newly approved 2019 POCD.

“For lack of moderate and affordable housing, can we honestly say the proposal addresses the needs beyond the narrowest definition?” Smith asked. “This will add up to 40 more vehicles to an area that is choked already, not withstanding studies. It presents clear and present danger to pedestrians.”

Liz Peldunas of Riverside Association complimented the move away from “a McDonld’s look,” but said the building was still too big.

Peldunas asked who would pay market rate to live next to McDonald’s anyway?

And, she pointed out that the property is zoned for Dundee School.

“Walking to Dundee? You’re going to drive your kid. Even a middle schooler would be challenged to navigate that intersection,” she said.

Riverside resident Susan Foster said allowing the extra height would set a precedent in Riverside and that soil and water testing should be done early in the process. “Why aren’t the questions being answered way before this point?”

The application was left open, and the applicant was asked to take a hard look at locating the parking underground and reducing the number of units.

20-Unit Apartment Building Does Not Fare Well in Architectural Critique

Next for the Wrecking Ball in Greenwich: Indian Harbor Mansion That Sold for $13 Million