At Tuesday’s P&Z meeting Candace Garthwaite and Rita Baker presented a pre-application for a proposed “Scenic Road” designation for a loop around the northern part of Binney Park.

The route would include portions of Sound Beach Ave, Wesskum Wood Rd, and Arch Street in Old Greenwich – essentially a loop around Binney Pond – for a total of .6 miles.

“There’s so many characteristics that define a scenic road,” Garthwaite said, adding that the route features many historic elements.

“This is our gateway to Old Greenwich,” Baker said. “We want to preserve the unique character of that part of Old Greenwich.”

In addition to views of historic Binney Park with its pond, streams, stone walls, beautiful trees and scenic views, the route would include the First Congregational Church, established in the 1600s, and the historic graveyard where prominent figures include Edward Binney, as well as the Perrot Library with its Jeffersonian architecture.

“There is also the history of how Helen Kitchel donated the land for Binney Park,” she added. “There are so many stories to tell.” 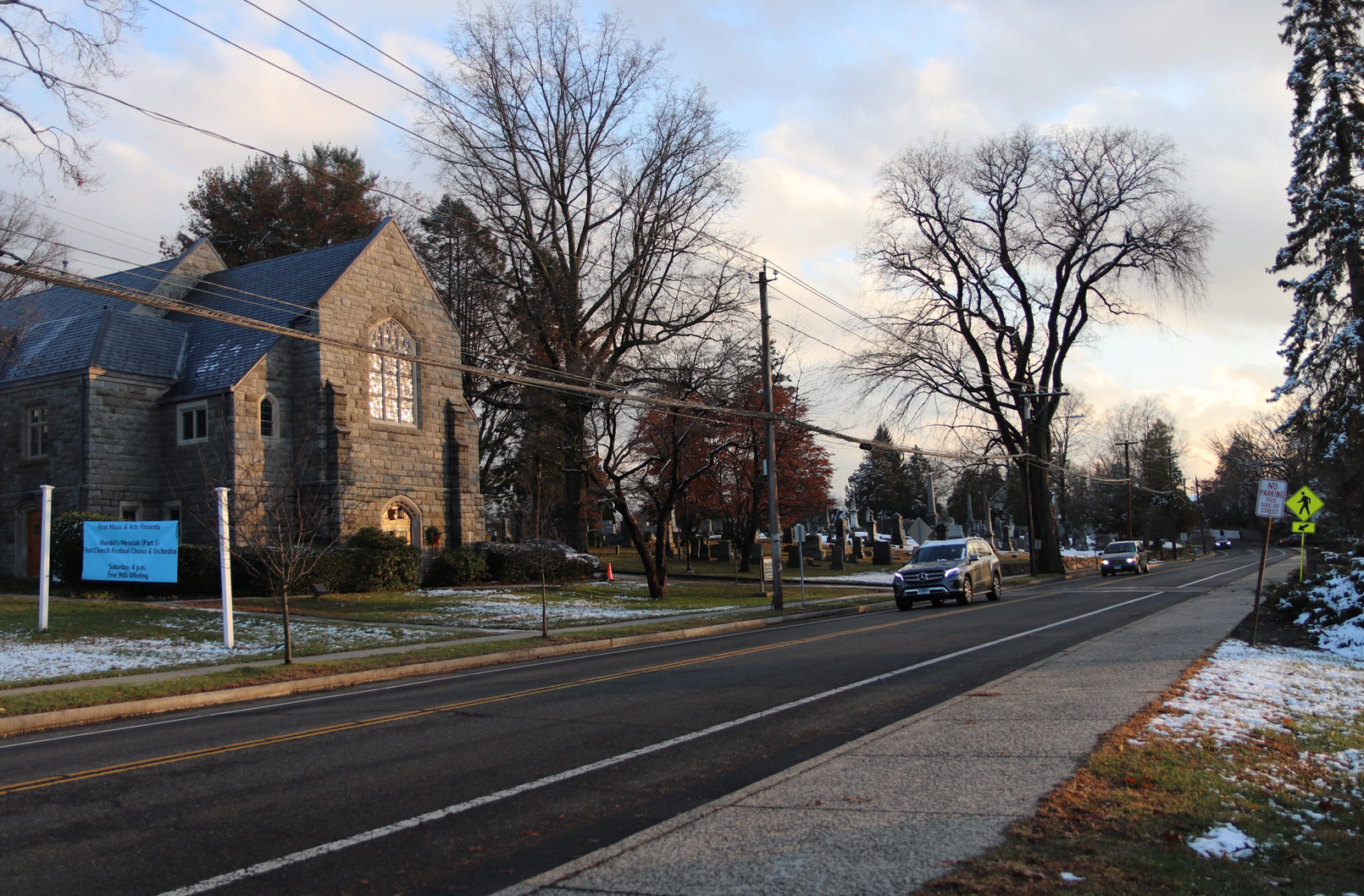 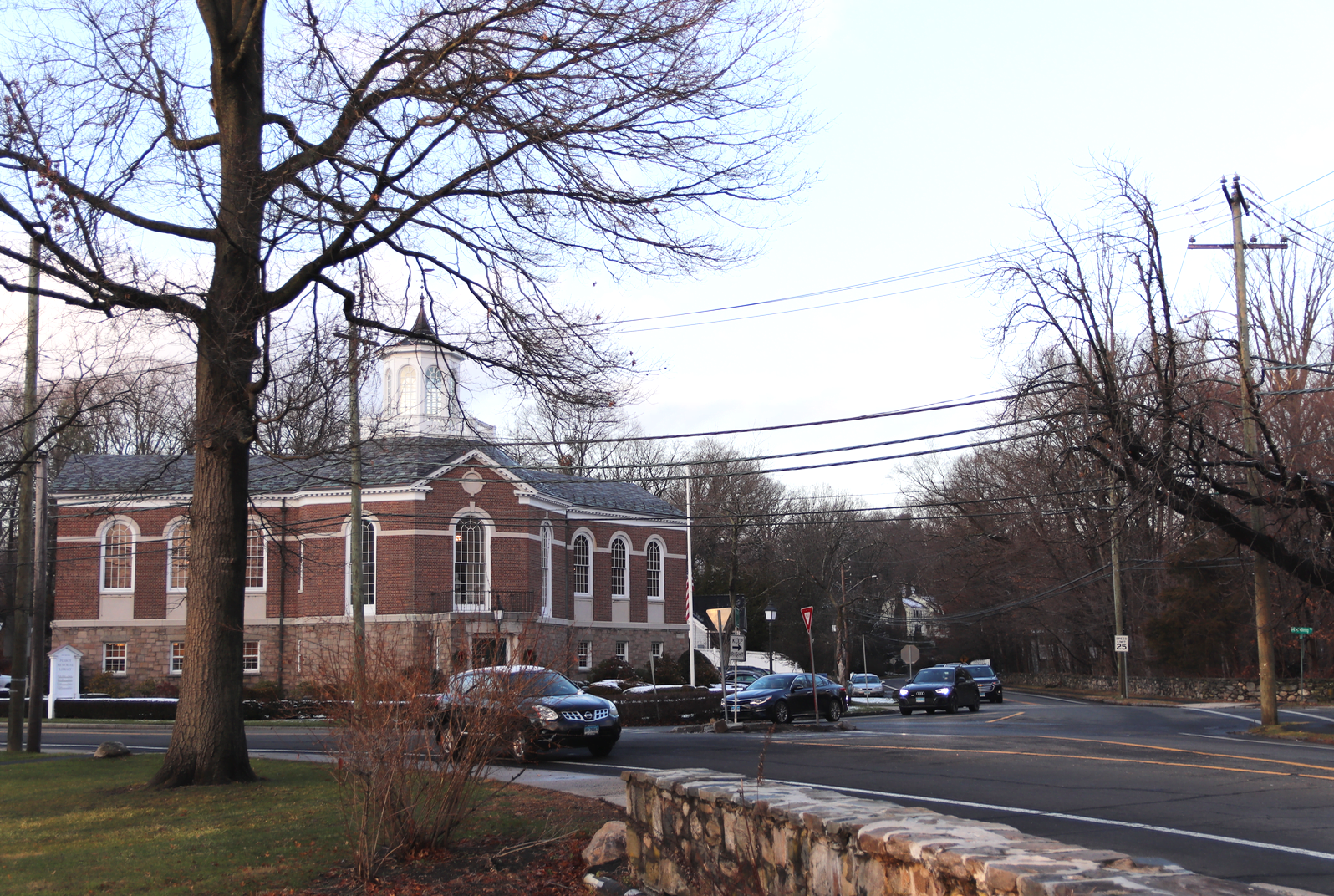 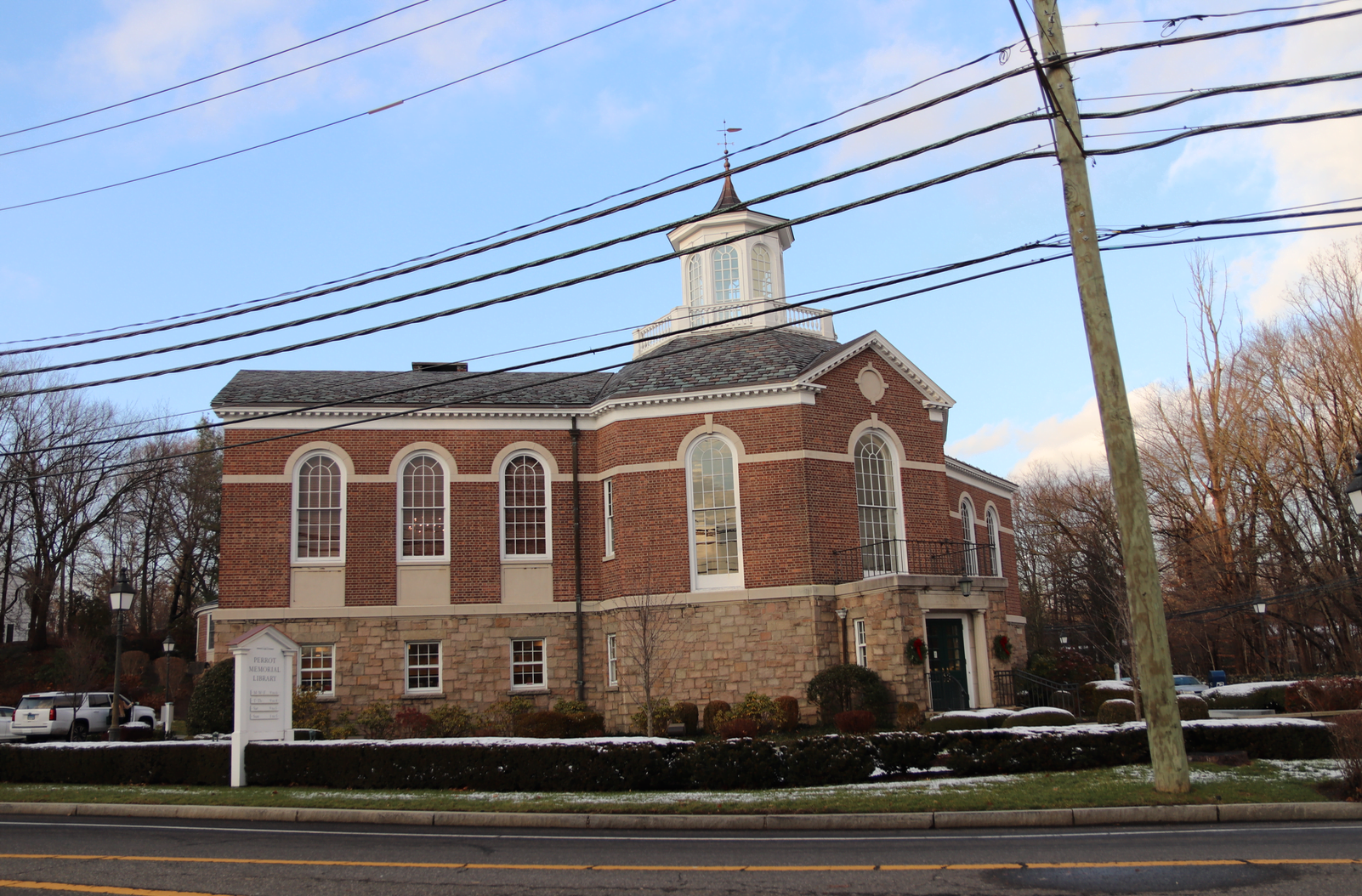 Garthwaite said the idea for a Scenic Road began in spring 2018 when Greenwich’s Dept of Public Works proposed a bridge and rotary project. She said the project would have changed the iconic character the entry to Old Greenwich. 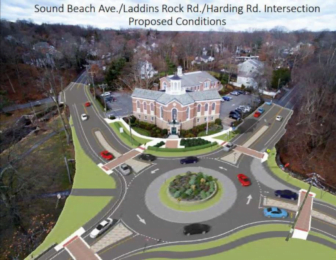 Those proposed upgrades came about after the Town sought CT Dept of Transportation funding for upgrades to the bridge where Sound Beach Ave goes over the Cider Mill Brook. The idea was to bring the bridge up to the 100 year storm standards. The bridge is rated poor and needs to be rebuilt.

Neighbors turned out in number to oppose a 100-ft traffic circle on Sound Beach Ave by Laddins Rock Rd and Harding Rd (by the Perrot Library).

After two public hearings with townspeople protesting the project, P&Z took a vote at a special meeting on May 14, 2018.

Voting in favor of the MI were Richard Maitland, Andy Fox, and Nick Macri. Voting against were Margarita Alban and Peter Levy.

“When we were before you on that MI, we were asked if this was a scenic road. The light bulbs went off at that point.” – Candace Garthwaite

Garthwaite said that she, Rita Baker and Lorain Lovejoy started knocking on doors of abuttors to talk about a Scenic Road. “The community felt so strongly and emotionally about this sense of place.”

Baker said neighbors and abutting neighbors were 100% in favor of the idea.

“We have notices from every neighbor, except for two whose homes are rentals and we were unable to contact them,” Baker said.

“Scenic roads are irreplaceable resources, the destruction of which has had and will have an adverse impact on the town’s historic and scenic heritage. The purpose of this Article is to establish standards and procedures for designating town highways [1] or portions thereof as scenic roads and for regulating and preserving the town’s scenic roads for the benefit of present and future generations.

The commissioners noted Tuesday’s discussion was for direction, and any input from the commission would be non binding.

That might be hard to reconcile with the traffic on Sound Beach Ave.

There was discussion of amending the Town Charter so that the language on scenic roads allows a road with more traffic.

“I know a lot of people say they drive through Bruce Park when they’ve had a stressful day when they drive back from downtown. If that’s not a scenic road, I don’t know what is,” said Commission chair Margarita Alban. “What about the piece of public road that goes to Tod’s. Is that scenic? Should we be making efforts to protect that?”

Alban said all over Facebook people post photos that illustrate their ties to town parks. Should we be taking steps to protect those parks?” she asked.

“Especially Bruce Park, when you think about the impact that Eversource could have had on Bruce Park. We didn’t have a tool in our kit to protect Bruce Park as much as we wanted to. Maybe we need something broader that would allow us to protect more beautiful drives.” 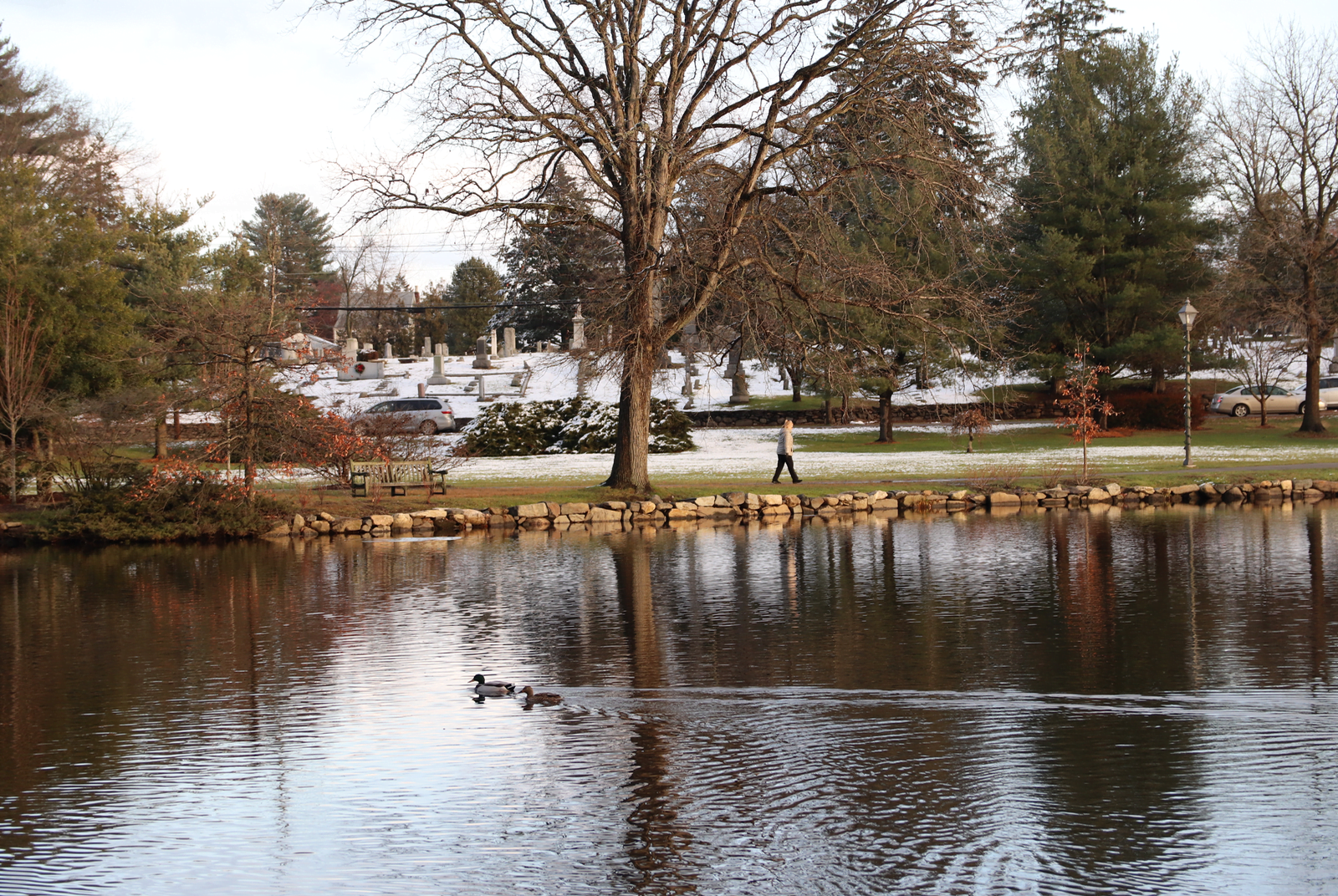 “All the scenic road gets you is control over what happens within the right of way,” DeLuca said, using Cliffdale application as an example.

She said there were trees or stone walls outside the right of way that couldn’t be protected.

DeLuca read aloud Section 11-13 (b), says “Alterations or improvements to a scenic road include but are not limited to, reconstruction of a scenic road, widening of the right of way or of the traveled portion of the scenic road, changes of grade, straightening, removal of stone walls and/or mature trees, but exclude routine repairs or maintenance.”

“But that is literally within the right of way. You’re only talking about that 50 feet. The things you’re describing as of value, and are obviously outside the 50 ft.”

“We’re just saying you do the first step with Binney and leave the door open so others could come behind you and we could do more,” Alban suggested. 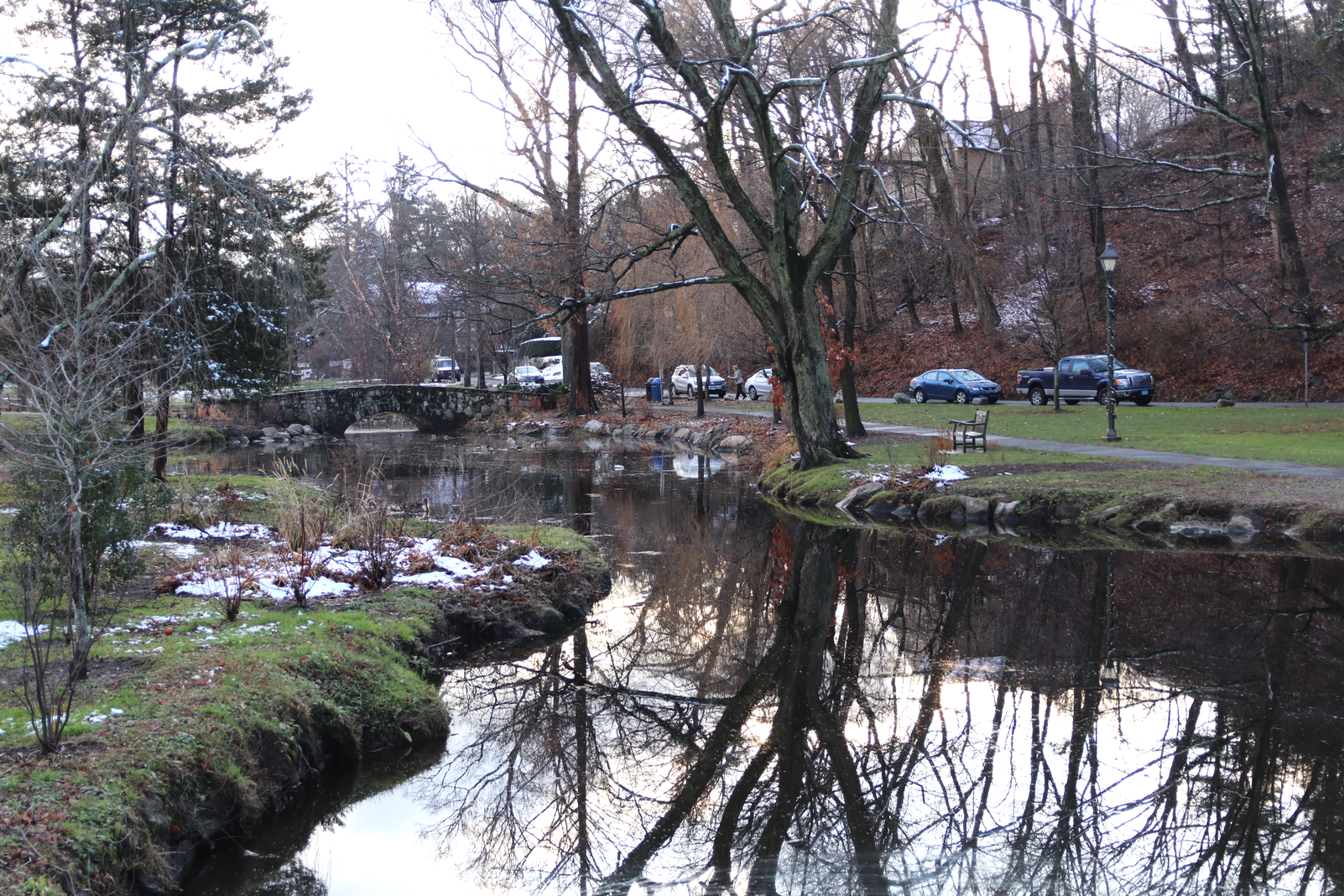 Commissioner Peter Levy said there is a possibility of using a regulation that preserves a view. He also said speed limits might come into the equation of whether this loop can be designated scenic.

“We can work with the First Congregational Church and the Perrot Library for historic landmark,” Garthwaite said.

“Bite off what can be chewed now,” Alban said. “Small bites.”

The loop straddles parts of both Riverside and Old Greenwich.

“There is something so calming about the beautiful scenery and beautiful view. I didn’t feel the traffic took away from it at all,” Garthwaite said. “You can just rest your eyes and brain, and just take it in. I don’t feel the number of cars takes away from what we are trying to protect.”

Garthwaite and Baker agreed to explore the possibility of charter change and look at previously approved applications for scenic roads in Greenwich.

There is information about Charter Change on the law department’s page on town website.

“We’re home rule on this which means Greenwich can differ from the State on this,” Alban said. “We should take the traffic questions out of it. It is high volume. That’s not the issue in my mind. My sense is this is consistent with the newly approved 2019 POCD which talks emphatically about community character.”

If it is possible to get a charter change approved, the MI would then go before the Board of Selectmen, and then the RTM, before coming back to P&Z. 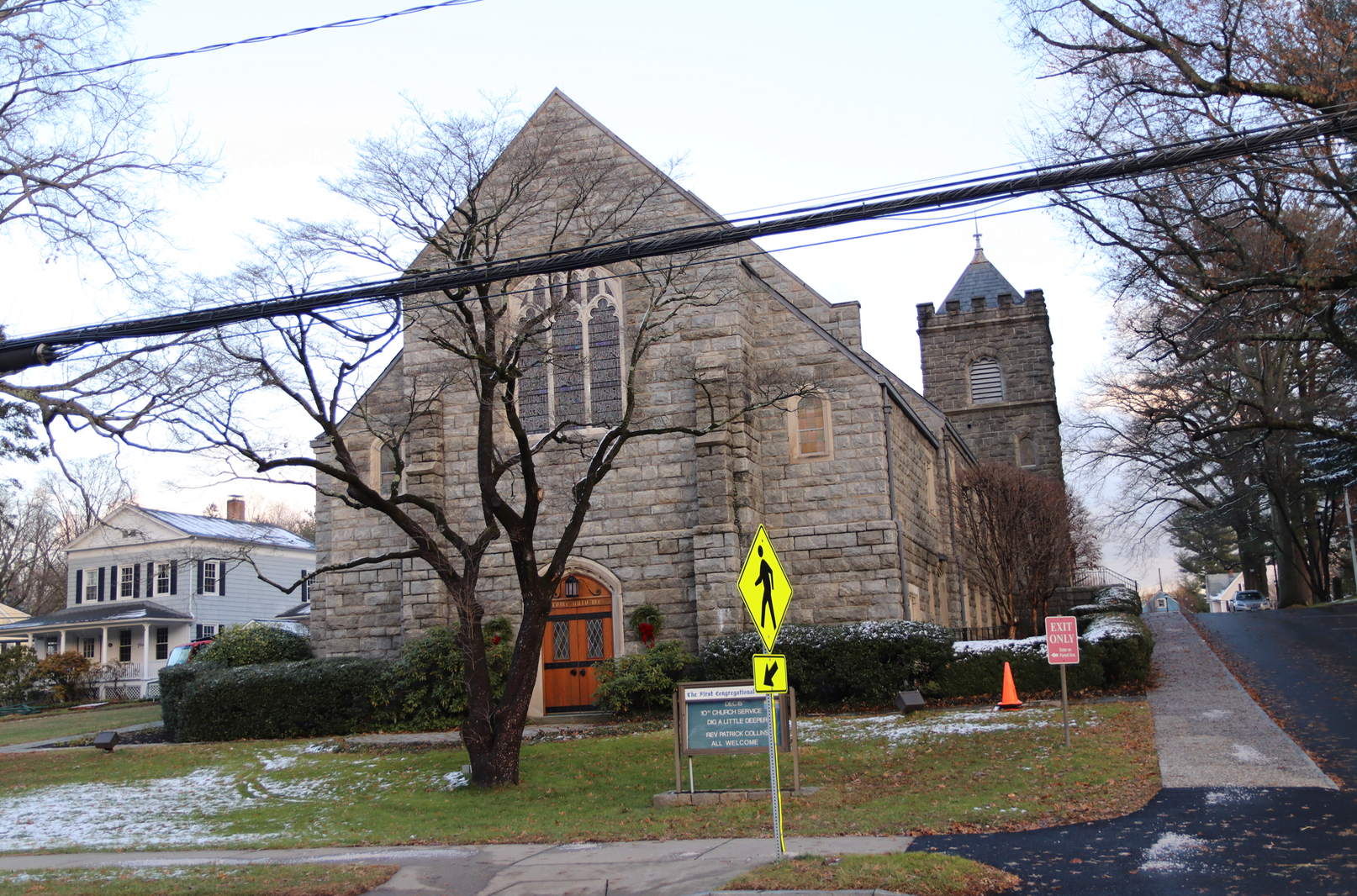 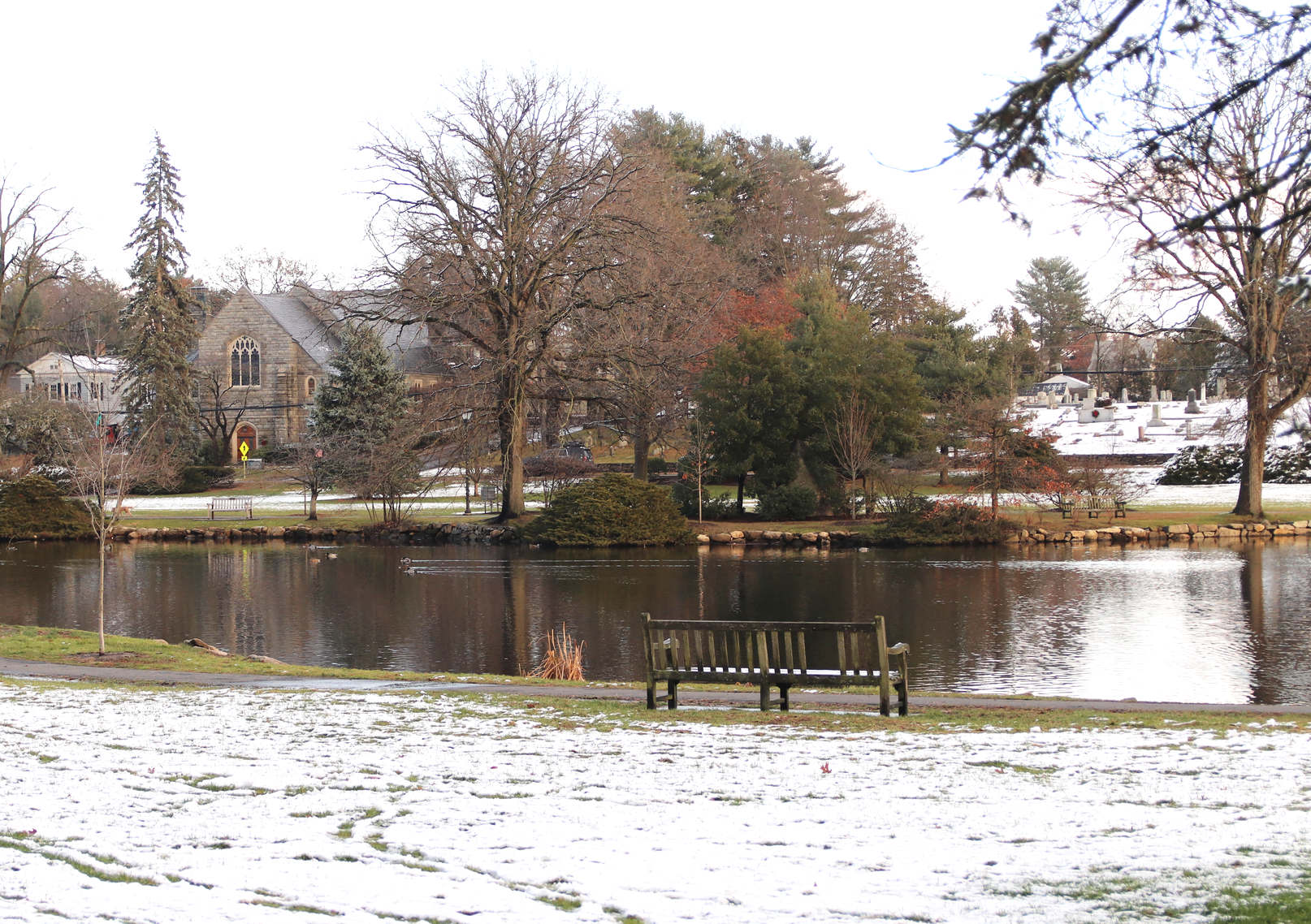 View from Binney Park of pond with The First Congregational Church of Greenwich and graveyard on Sound Beach Ave. Dec 11, 2019 Photo: Leslie Yager

Residents on Bridge Fix and Raised Rotary in Old Greenwich: “Fix the Railroad Culvert, Not the Rotary!”