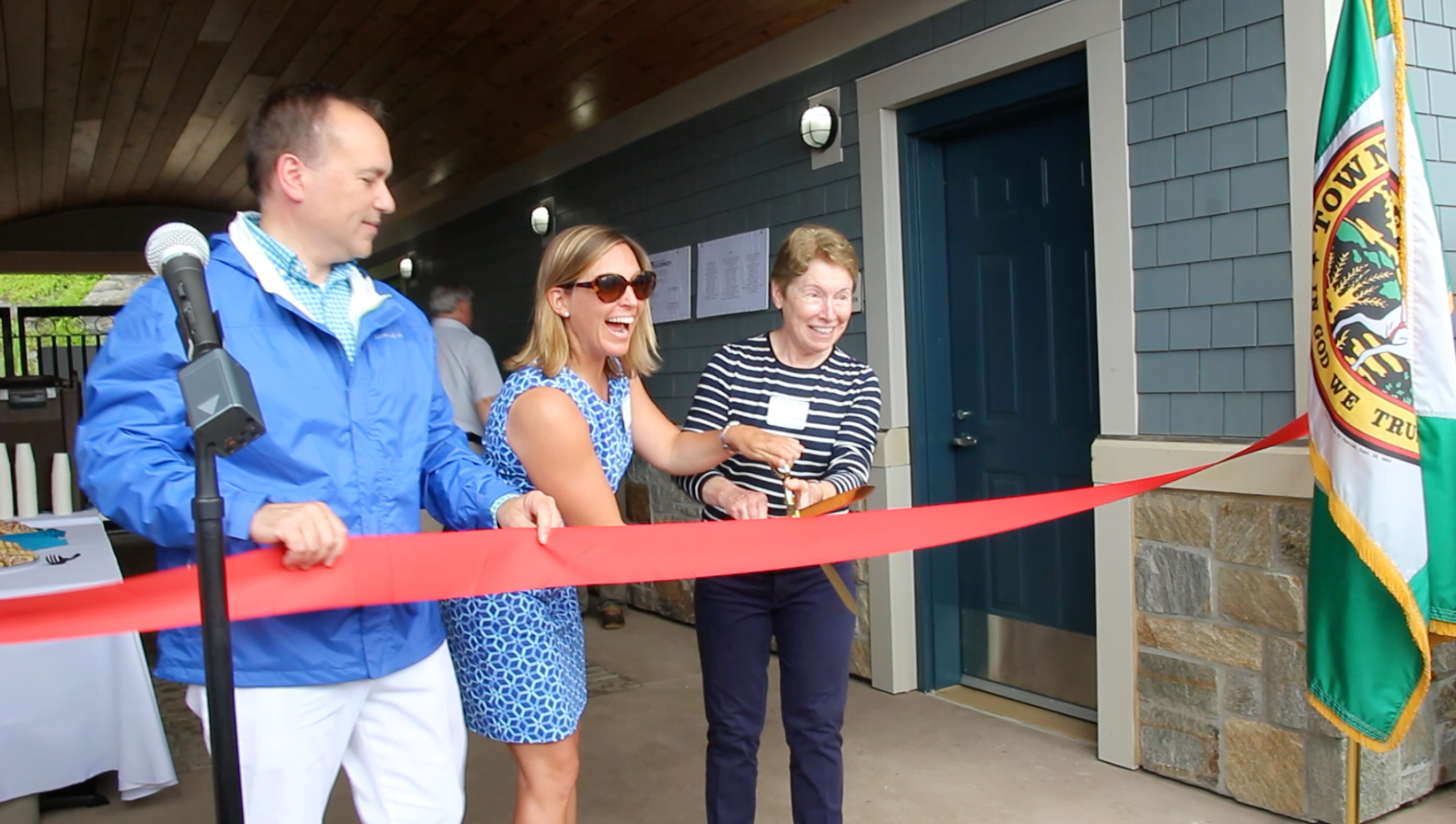 On Thursday morning the long awaited opening of the Greenwich Pool at Byram Park was celebrated with a ribbon cutting.

Among a crowd of about 150 invited guests, the ribbon was cut by the Junior League of Greenwich’s capital campaign co-chairs Carisa Sykes and Debby Lash, as Parks & Rec director Joe Siciliano along with Superintendent Building Construction and Maintenance Al Monelli and First Selectman Peter Tesei looked on.

After a night of thunder storms, followed by morning showers, the clouds parted as if on cue and the steam began to rise from the brand new pool deck. Guests gravitated to the shimmering blue pool as lifeguards took their stations. 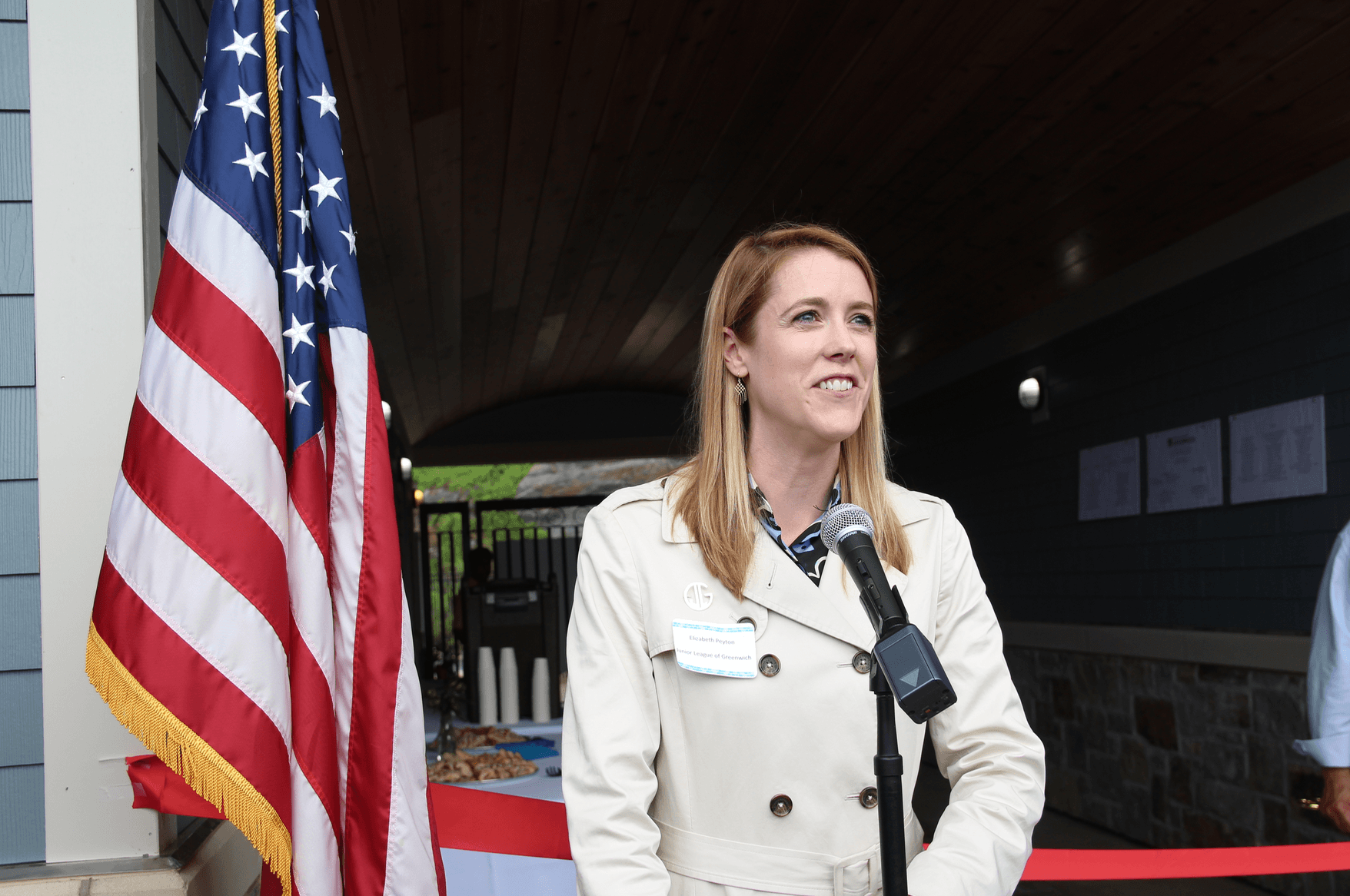 Junior League of Greenwich president Elizabeth Peyton thanked the lengthy list of people who made possible the opening of the Greenwich Pool at Byram Park. June 28, 2018 Photo: Leslie Yager 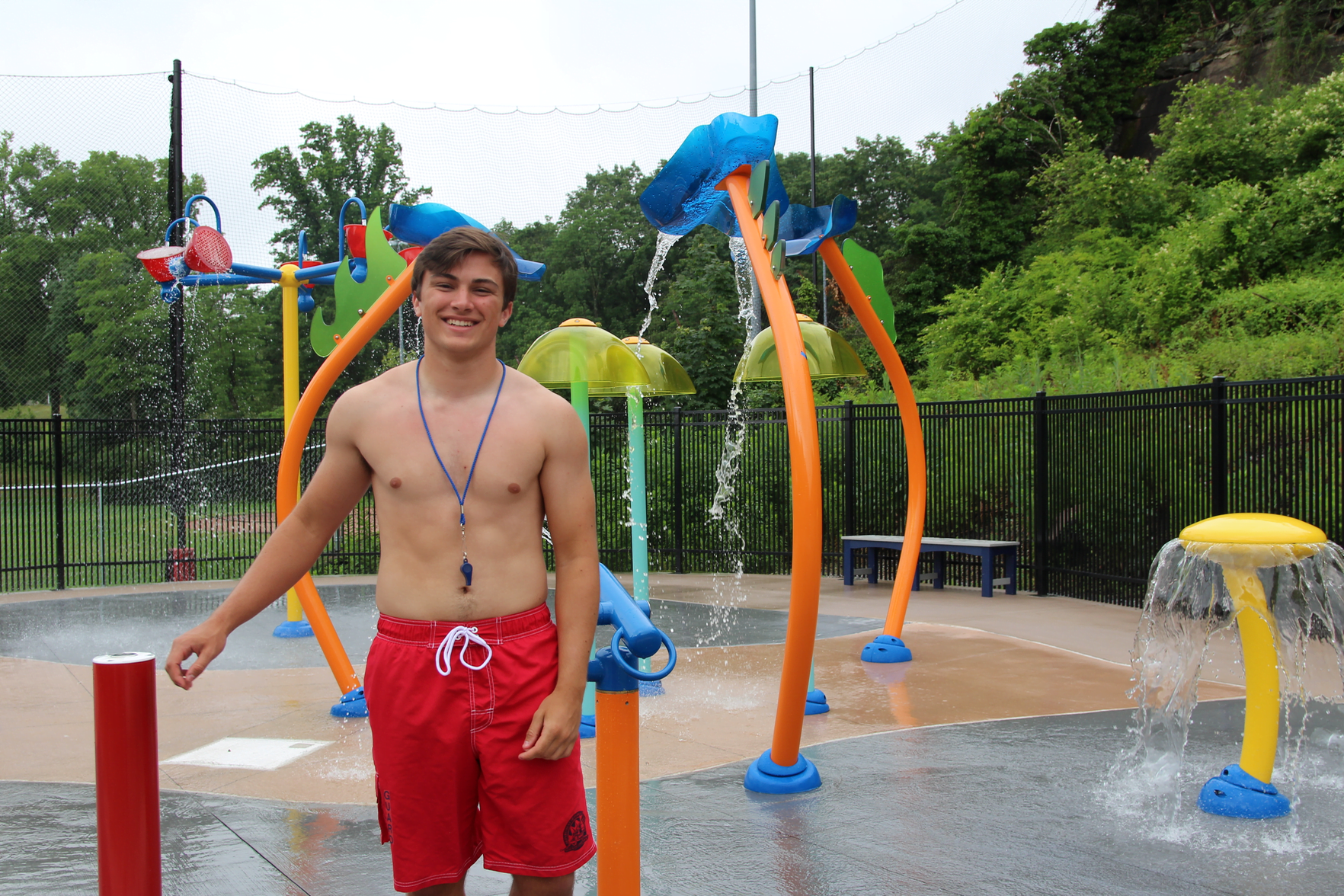 The first family to test out the pool was the Judges of Byram – Tim and daughters Lauren and Emilie.

The pool project was launched back in 2011 and First Selectman Peter Tesei in his remarks praised the Junior League for their tenacity in seeing the project through. In fact, he noted it is likely the League’s biggest project, as they raised $2.5million for the endeavor. 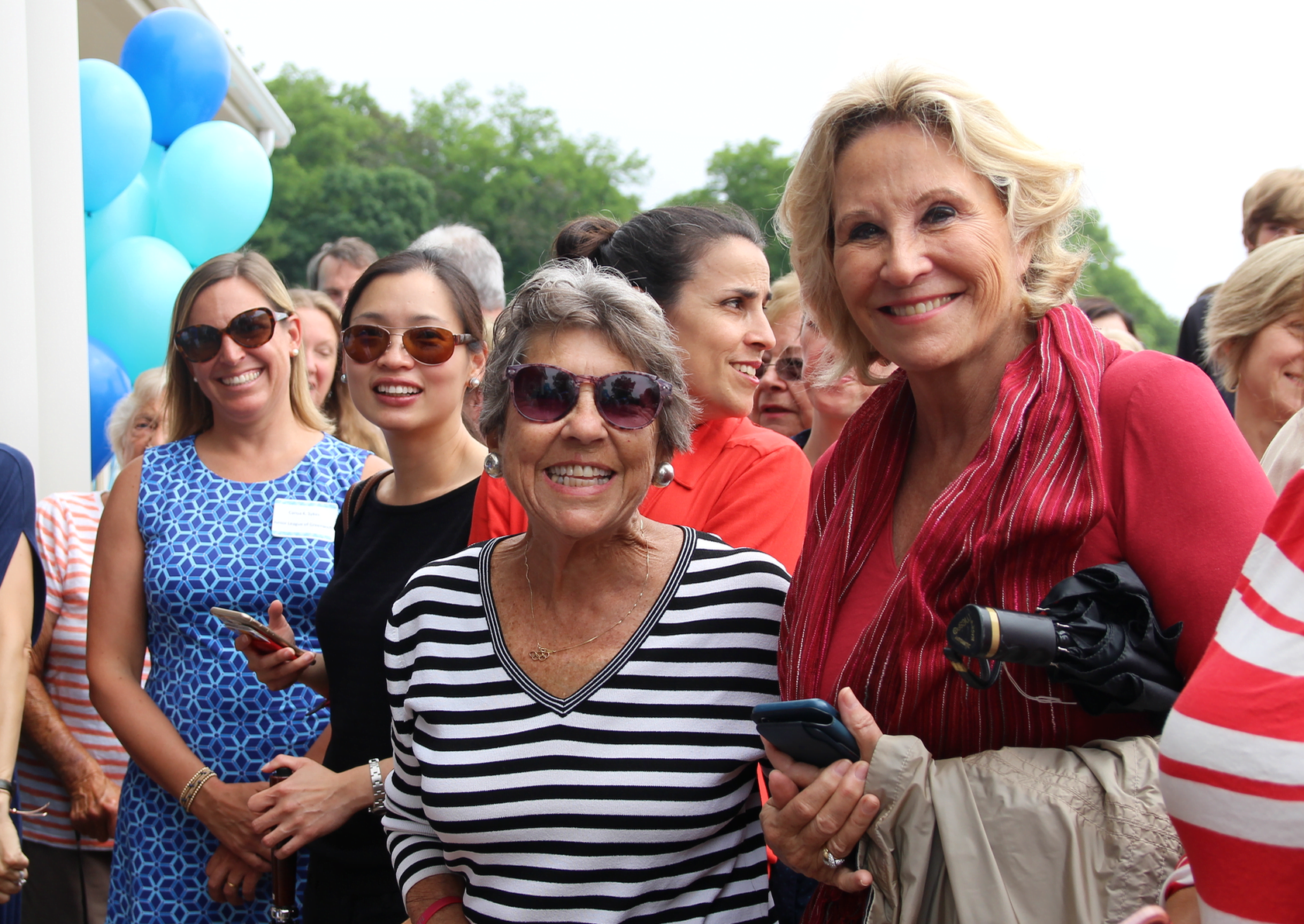 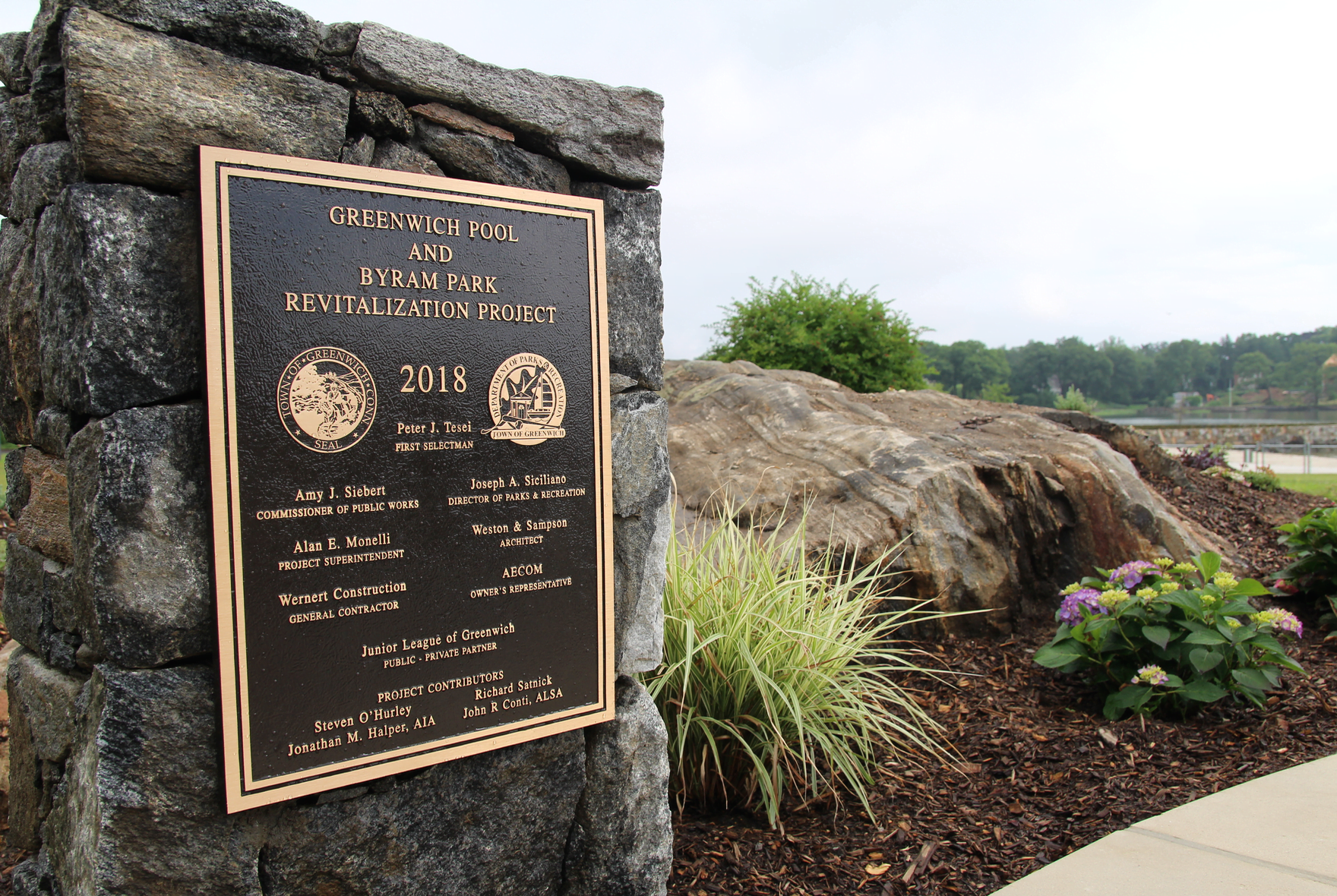 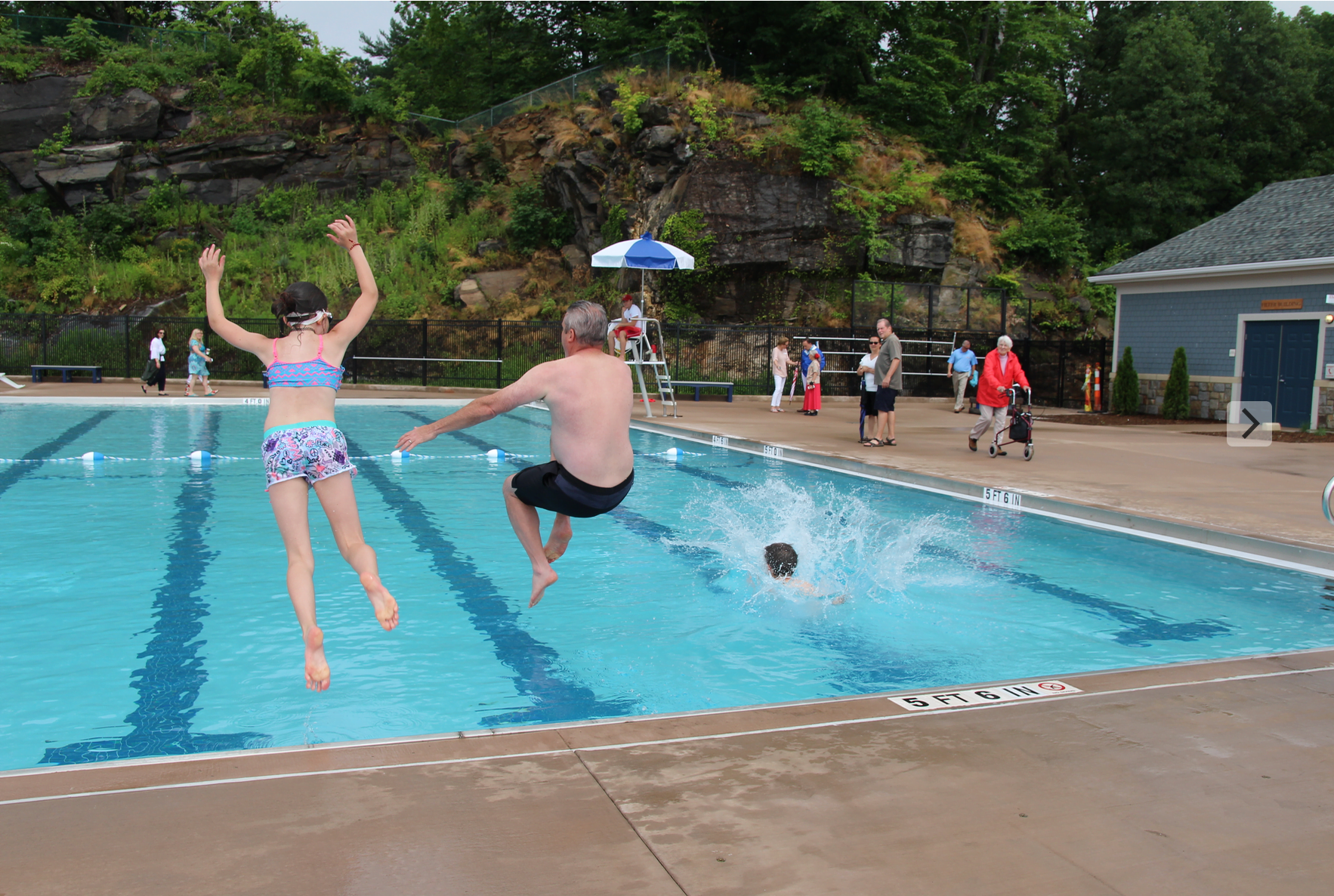 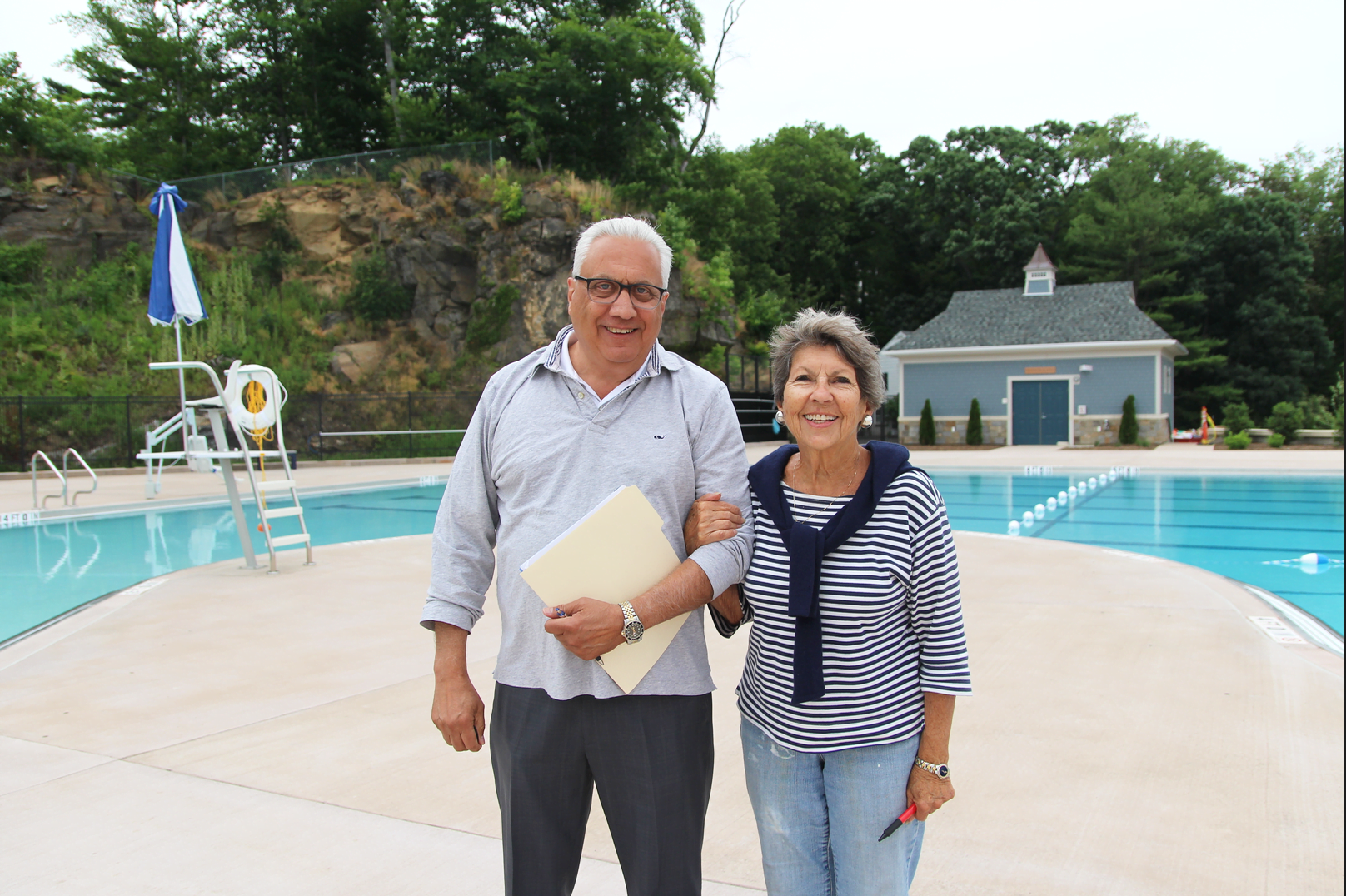 On Wednesday night the Parks & Recreation board held its June meeting at the new pool.

Joe Siciliano was beaming as the facility had just received a Temporary Certificate of Occupancy two hours earlier.

He said there were still some issues with the concession stand, so that will not formally opening along with the pool, but there is a temporary opportunity for food service. 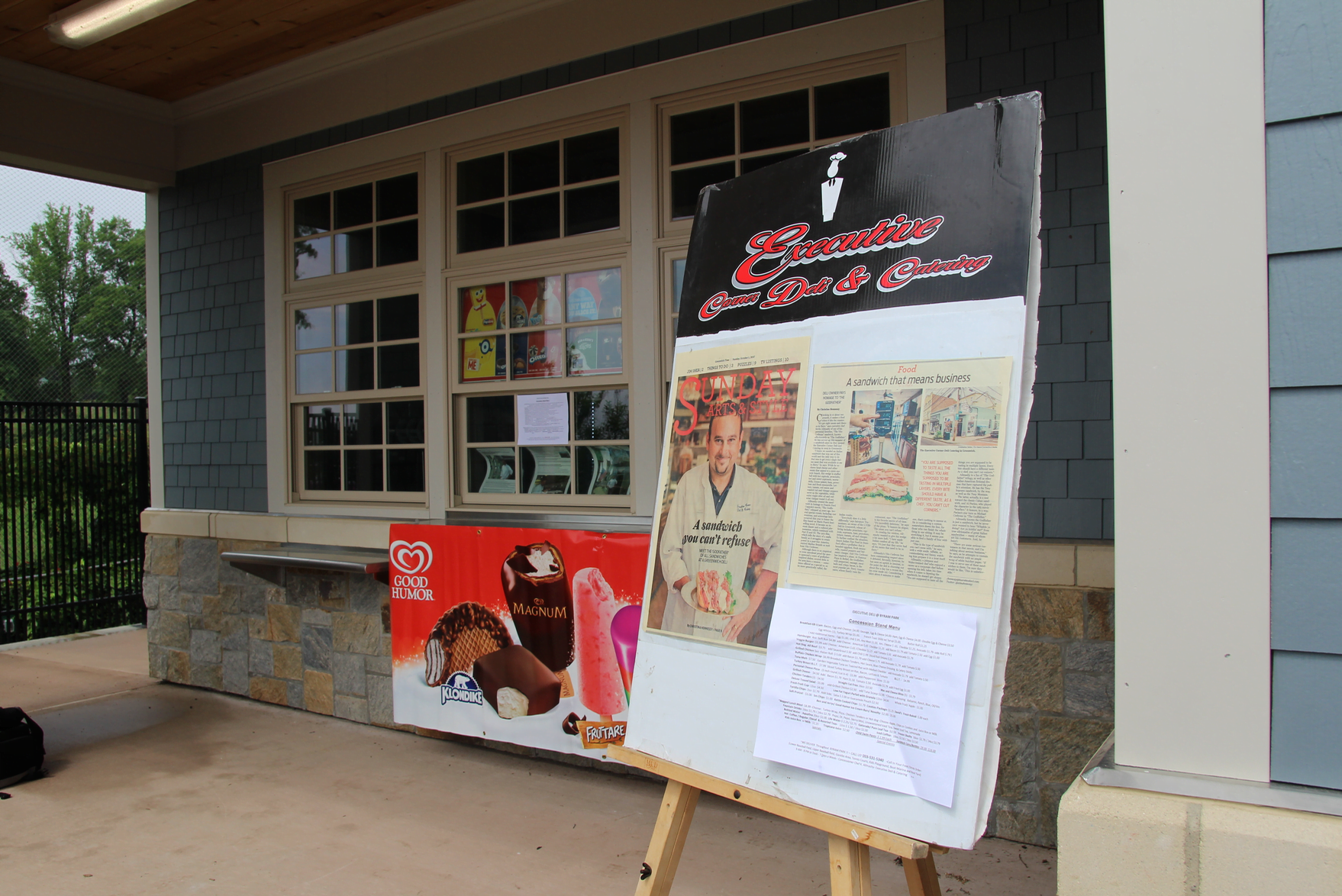 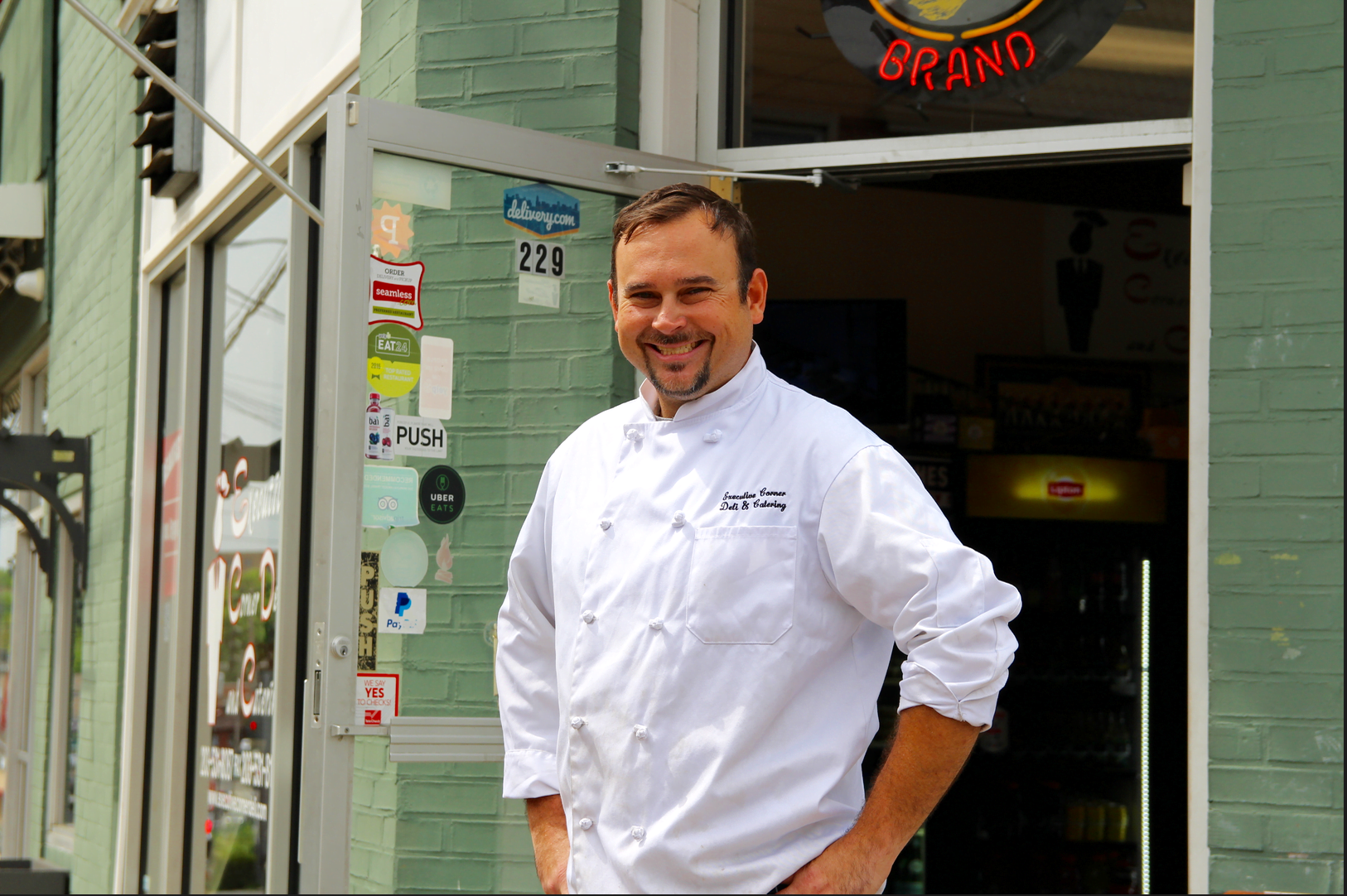 Kevin Allmashy of Executive Deli on Delavan Ave in Byram won the contract to run the concession stand.

Siciliano gave an overview of the running of the pool vis a vis the beach and the other parts of the park, including guest policy, fees, and scheduling.

The 6,000 sq ft pool is “zero entry,” which means it’s easy to enter, like walking into the water at the beach. The other end of the pool has steps into a semi circle, where two classes a week will be offered through the Senior Center. There will also be morning swimming lessons starting the week of July 9th. The idea is to have the lessons finished before the pool opens to the public at 11:00am. 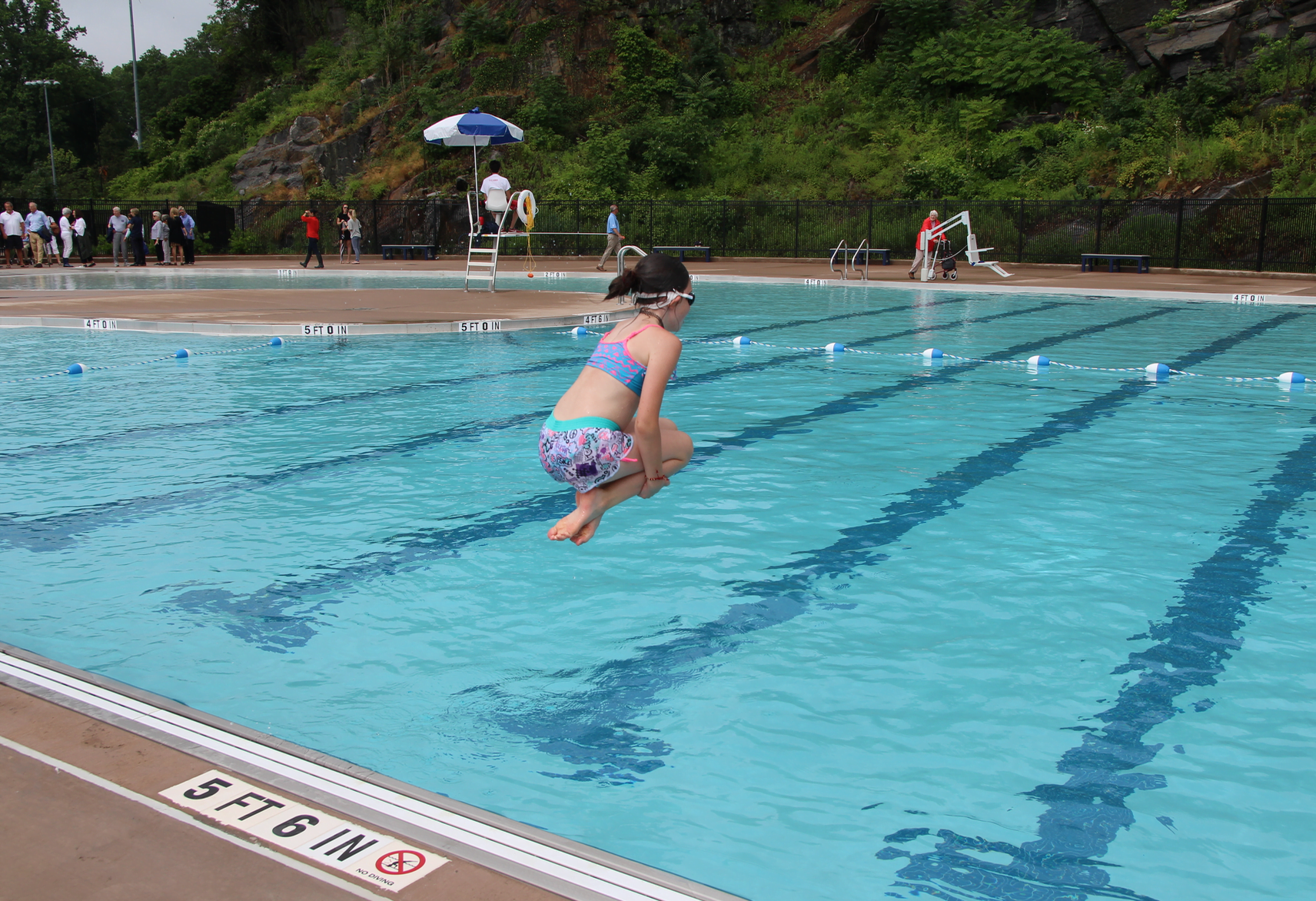 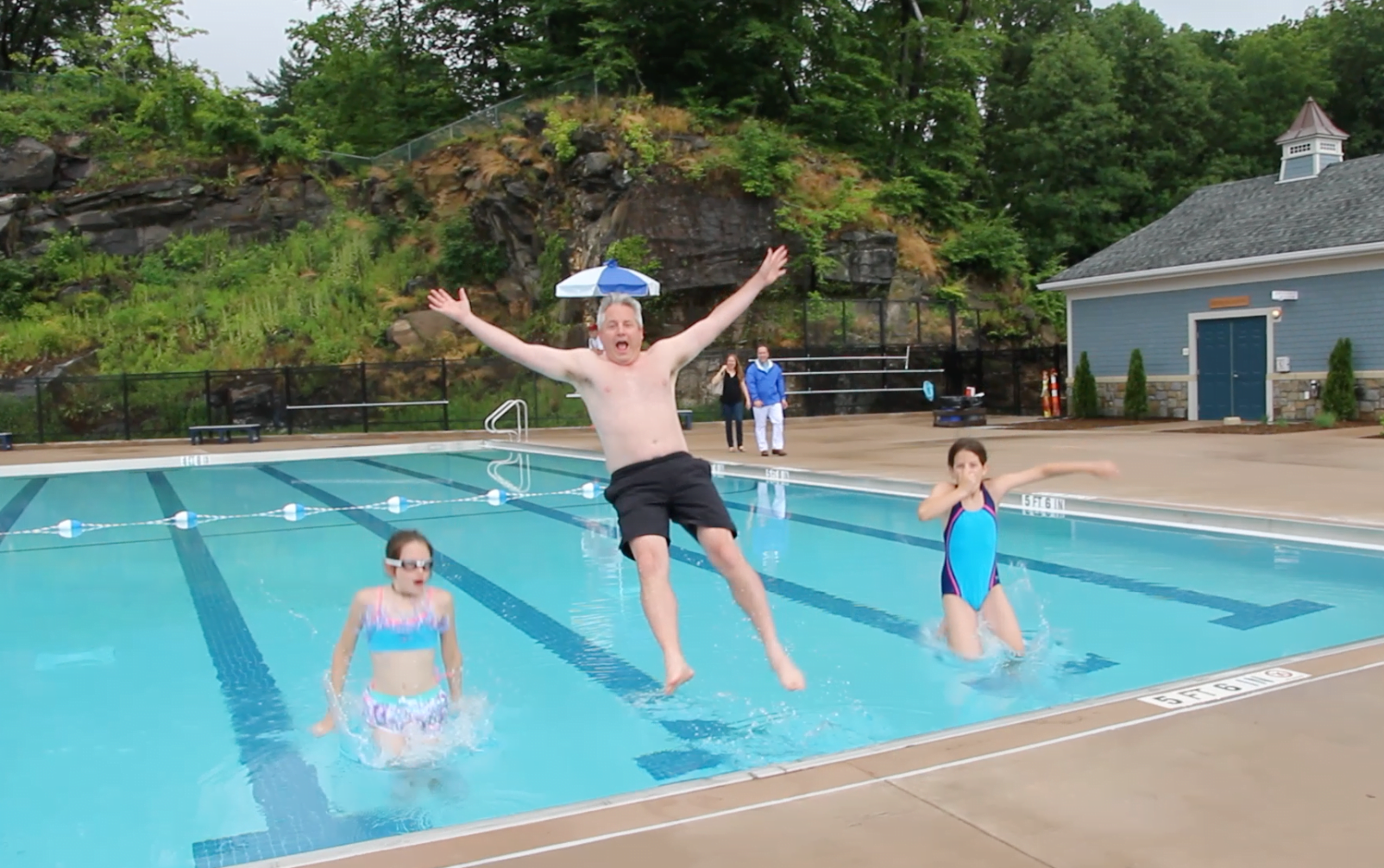 Siciliano said the new pool is six times larger than the pool it replaced, and 50 additional parking spaces have been added.

“For this summer, we know what’s going to happen. We’re going to have a line of people waiting to get in this pool. We didn’t build a pool for 10,000 people to get in at the same time. We expect some parking delays and people waiting in line because everyone is excited about coming.” 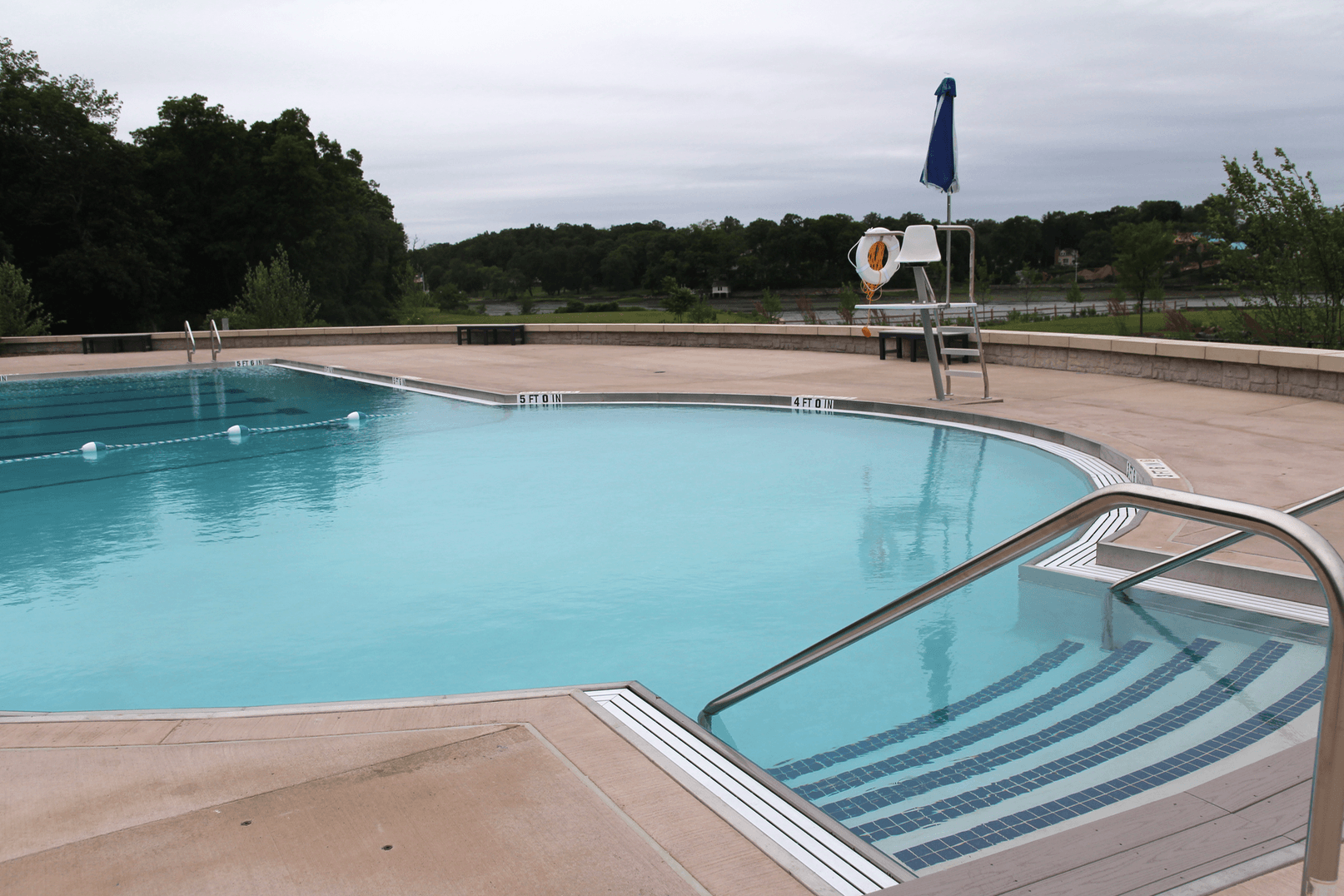 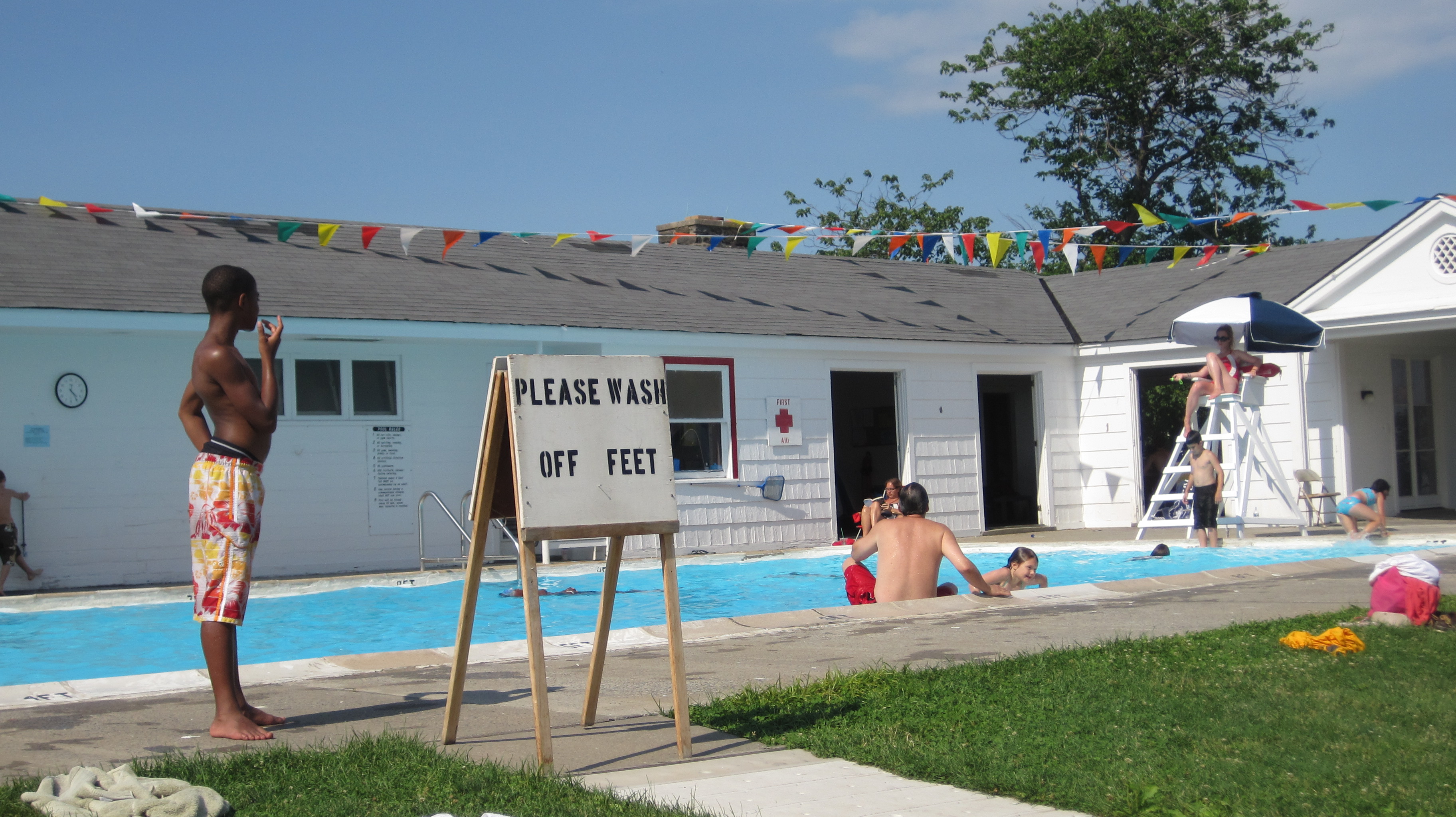 Many remember the former Byram pool which dated back to 1925. It was part of the Rosenwald property the Town purchased. Summer 2011. Credit: Leslie Yager

Siciliano also said that for now people will not be allowed to bring in beach chairs onto the pool deck, though there are plentiful benches and a wall around the pool that was intended for people to sit on. The idea is to transition people in and out of the pool, rather than have then set up chairs and stay for five hours.

A lifeguard staff, pool manager, and assistant pool manager have been hired. They’re all certified in pool operations and as lifeguards.

All the lavatories and showers for the beach and pool in one building, which also includes changing facilities.

There is an alarm system in place. Should someone trespass the system will notify the caretaker and Greenwich Police.

There is a wristband system to differentiate visitors who are destined for the beach (they pay $7.00 a guest). People visiting the pool will receive a different color wristband at the gate (and pay $8.00 for a guest).

(Beach guest passes are available online as well as in person at the Eastern and Western Greenwich Civic Centers on weekdays.).

There is a maximum number of guests a household can bring for the season: 10. A park pass holder must be at least 14 years old to bring a guest.

There are occupancy limits to the pool area, which Siciliano anticipates will max out at first. The limit is 240 people. 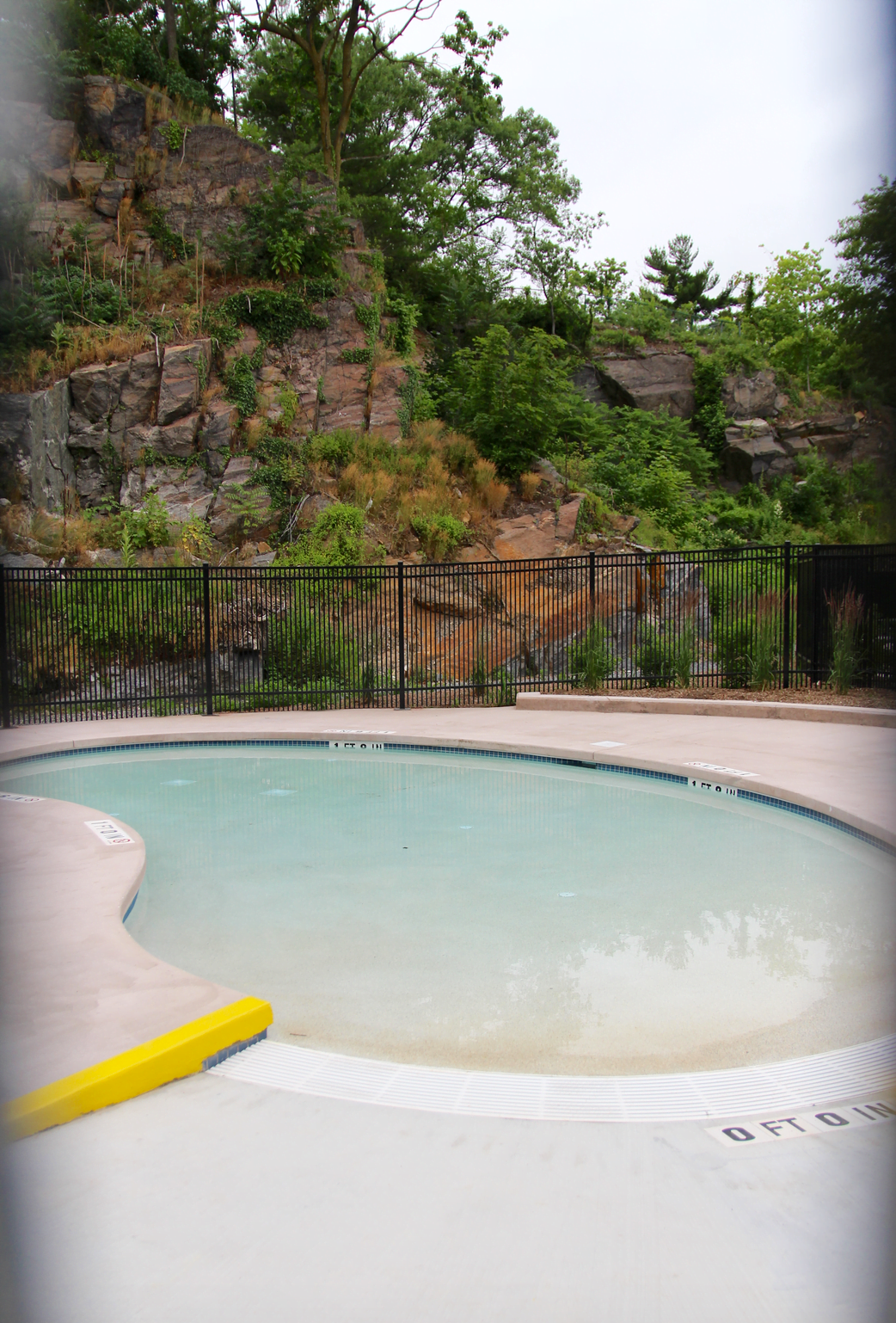 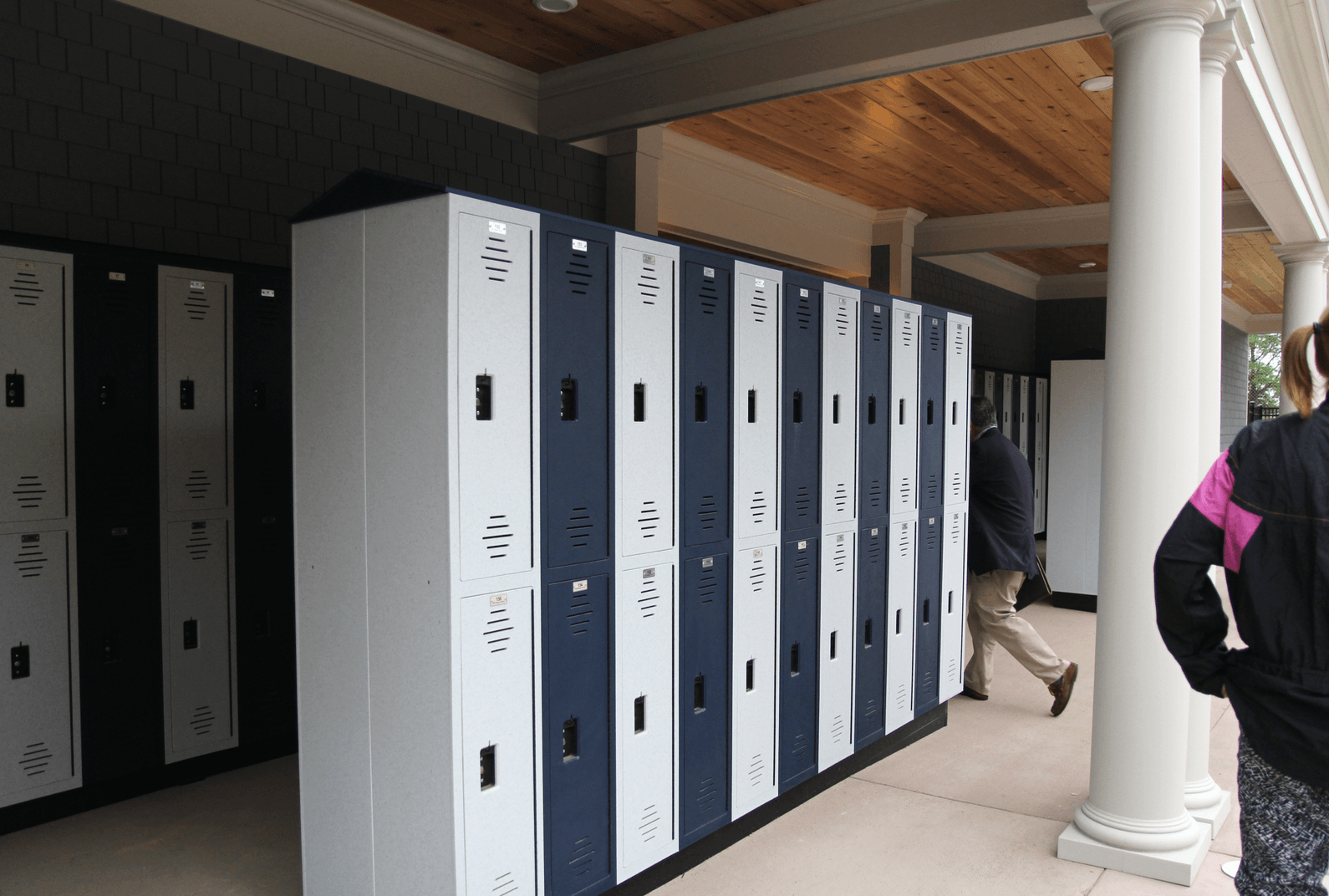 PHOTOS: Groundbreaking for Community Pool in Byram Marks the Beginning of “The Easy Part”

Take a Stroll Through Byram Park