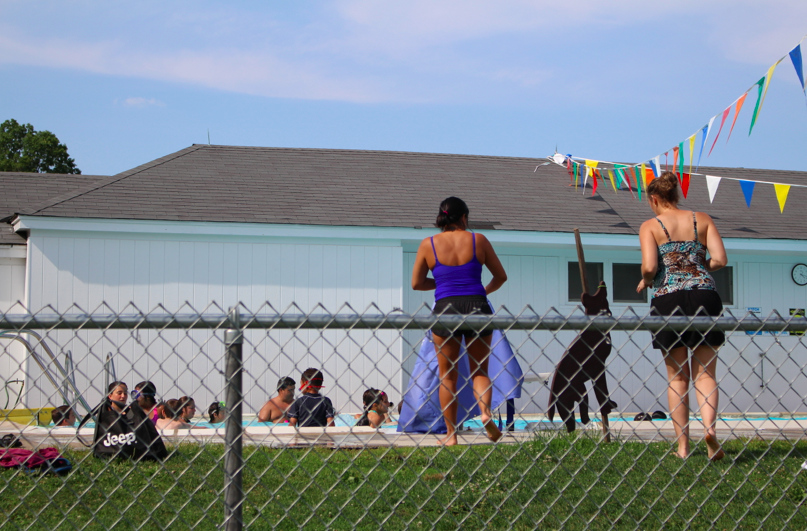 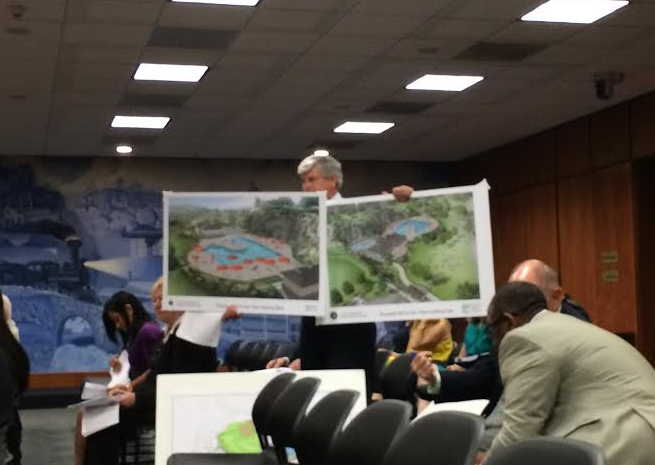 At Thursday’s Board of Selectmen meeting, Peter Tesei introduced Alan Monelli, the Town’s Supervisor for building construction & maintenance. Monelli presented the Byram Park Beach Pool project, which was up for MI or Municipal Improvement status.

The current pool has a capacity of just 40 people. The project would replace it with a new pool in “a more secure location” at a proper flood elevation.

If approved the pool would be located in the eastern part of the park and could accommodate 310 swimmers.

The project includes expansion of the existing parking lot and restoration of some natural dunes with plantings.

Selectman Dave Theis said he was exited by the project and complimented its innovative design.

Selectman Drew Marzullo asked what happens when more people would like to swim than the pool can accommodate. Monelli said currently the pool implements a half hour or hour rotation basis when a line forms.

As far as a motion to move the project forward for approval, Tesei said he had been advised by the Town’s special counsel for land use, Mr. Wetmore, that “the Selectmen don’t have the ability to condition a municipal approval.”

Still, Tesei said he had the ability to express an opinion in support of the project with the “understanding” that that all environmental testing would first be completed and accepted, and that a final agreement would be reached with the Junior League of Greenwich.

Marzullo said that what P & Z does will impact the final costs of the project and issued the caveat, “We’re  approving it without the numbers.”

Three-term RTM member Peter Quigley, who is former vice chair of the land use commission and current member of the harbor commission introduced himself as a concerned citizen and tax payer.

Quigley said he didn’t question the merits of the project. But, he said, “Make certain this is the site you want to put this pool or is there a better place? …The taxpayer is going to have to bear this burden,” he said of the possibility the site might need remediation.

“We should be setting standards for other municipalities,” Quigley said of Monelli’s assurance that the Town would follow state protocols for testing. Quigley questioned the state’s testing standards, which he didn’t think included testing for metals and leads.

“With all due respect, that is not the impression I am giving…This is based on a historical finding. It may be that the site higher up is safe. But, this particular area sits downhill of Holly Hill Transfer station or dump. That is almost like Ground Zero of the fill that is being tracked to various locations along with the Cos Cob power plant as the two sources,” Quigley said.

“There is a historical trail,” Quigley said. “This is a municipal responsibility that is in front of the executives in the legislative part of Town for the public’s health and safety and for the taxpayer who ends up paying afterwards when we have to remediate…”

Monelli said phase 1 incorporates a historic review of the site, and sampling for hydrocarbons and arsenic as well as other chemicals typically found depending on what the property was used for in the past. “At Byram park we’re going down 5 feet and hitting rock,” Monelli said, of the site which was formerly a residence.

Marzullo asked why we aren’t testing at a more advance level? “Why can’t the Town go beyond the protocols and take testing a step further?”

That’s why there are protocols set up by the EPA and DEEP. But DPW goes a step further and performs soil tests. We look for hydrocarbons, fly ash, arsenic and a number of chemicals that would be typically found depending what the property was used for in the past.”

Of potential development sites in Greenwich in general, Tesei quoted Denise Savageau who had told him ‘It’s hard to find natural fill anywhere, because so much land has been disturbed over time.’

Quigley descried Byram Beach as one of the most polluted in the state and said that the runoff comes from Holly Hill Transfer station.

Parks & Rec Director said that actually the runoff that most impacts Byram beach comes from I-95. 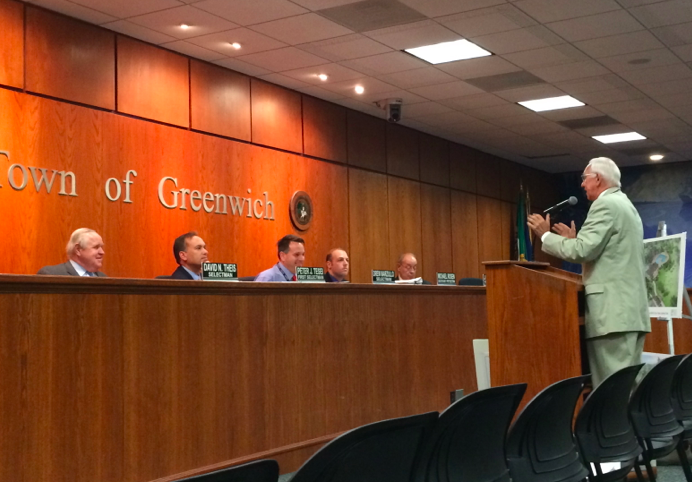 Peter Quigley addressed the Board of Selectmen about his concerns that the Town might find contaminated soil at the site of the proposed pool in Byram Beach Park, and suggested thinking in advance of an alternate site. Credit: Leslie Yager

Tesei said the BOS approval is contingent on compliance to state law. “I do appreciate what you’re saying,” Tesei said to Quigley.

The project next goes before the Planning & Zoning Commission.