Before Al Monelli even mentioned the high levels of Arsenic recently discovered in the soil in the field at 30-acre Byram Park, during Thursday morning’s Board of Selectmen meeting, he put the pool project in the context of history.

In 1974, a 5.2 acre waterfront property owned by the Rosenwalds was purchased by the Town. It was one of three properties pieced together to form Byram Park, where many are hopeful to see a large, ADA compliant recreational pool take shape and replace the old, leaky residential pool, a holdover from the Rosenwald property dating back to 1925.

Monelli, Greenwich’s Superintendent of Building Construction and Maintenance, explained that the Ritch family, namesake of Ritch Ave, which runs between the park and I-95, had owned a granite quarry on the site in the 1840s. 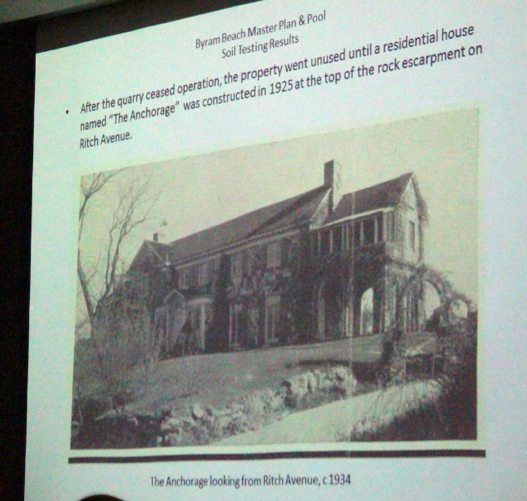 After the quarry shut down, a private home called “The Anchorage” was constructed there in 1925 on the top of a steep slope of granite, Monelli referred to as an escarpment. 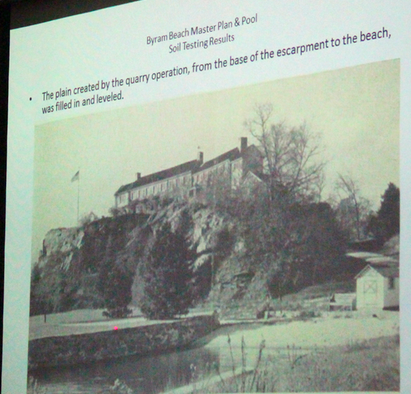 Under the seaside mansion, at the foot of the steep escarpment, fill was used to level the ground above the beach. As a result, “The Anchorage” benefited from an attractive lawn overlooking the waterfront.  In addition to the swimming pool, the property had a tennis court, which Monelli said was a clay court, rather than asphalt.

(The Town’s media library contains more park history, and its gradual transformation from a private seaside estate into a public park.)

A vintage photo from Monelli’s presentation is recognizable to those familiar with the park today.

The 1925 pool is small. After all, it was intended for use as a family pool. It has leaks which Monelli said are beyond repair. Lastly, the pool is not ADA compliant. 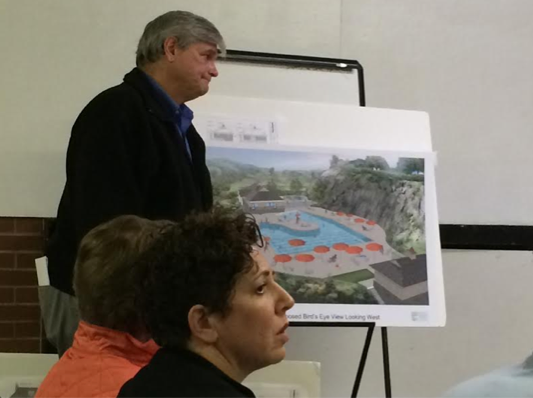 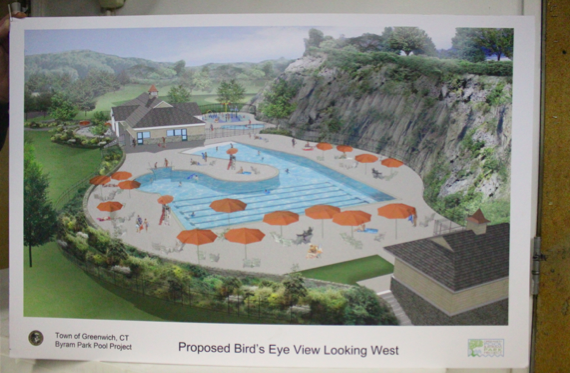 View looking west of the proposed recreational pool at Byram Park. This rendering was presented in July to the Selectmen when they granted MI status. It was presented to the Parks & Rec board in October and approved unanimously. Credit: Leslie Yager

In July, the Board of Selectmen granted MI status to the project.

On Oct. 30, Jr League’s Sue Rogers and Debbie Lash attended the Parks & Rec board meeting where Monelli shared a rendering of proposed pool, and detailed the history of the project which he described as “the most intense and complicated project” of his career. The Parks & Rec Board put their weight behind the project that night, delivering a unanimous vote.

Rogers, who has been involved in the project since the start, pointed out that the League has donated 10% of costs to date, specifically two $20,000 contributions toward the $400,000 incurred on studies. 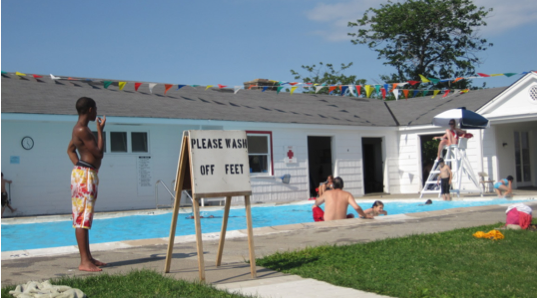 In the area of the proposed pool, which would be disturbed during the pool project, DPW did a ‘Phase I Plus’ site assessment, checking the soil for lead, chrome, cadmium, arsenic, nickel, silver, mercury, selenium, pesticides ETPH/PNA’s such as hydrocarbons, gasoline, asphalt and diesel fuel, and VOC’s such as vinyl chloride, trichloroethylene. All the tests were taken from beneath the turf and mulch layers, and went down to an average of 5 ft, hitting granite from the original quarry.

Monelli said that in order to level the field over the former quarry, a combination of sand, crushed stone and stone were brought in, and topped with 16-24″ of topsoil and grass.

Though no other contamination was found, including PCBs, high levels of Arsenic were discovered. Amy Siebert, head of DPW said explicitly, the word ‘field’ did not refer to a playing field, but, rather, to the grassy area near the existing pool.

During his presentation, Monelli said that because the Arsenic exceeded a CT DEEP threshold, the Town began Phase II of the site assessment, and a total of 77 soil samples were taken.

Monelli, said that going into Phase III it is important to note that the DEEP does not have jurisdiction over the cleanup of the site for three reasons.

Remediating Arsenic-Contaminated Soil
Monelli, who was joined by Siebert at the podium to answer questions from the Selectmen, explained that the Rosenwald portion of the park has been closed, including the pool, and will remain closed until the Town completes remediation, which is contingent on the approval of funding from the BET.

“How did the Arsenic get there?”
Monelli said Arsenic is a naturally recurring element in some New England  soils, and that back in the 1920s, the soil that was brought in as fill most likely contained the Arsenic. He said that remediation would mean removing the upper level of topsoil to a depth of 15″ and transporting it to a site within Connecticut that is licensed to receive soil containing Arsenic.

Monelli said that the project is at 30% complete and is going before P&Z on Tuesday, Dec. 9 for final site plan approval.

Amy Sierbert Commissioner of DPW said, “You worry about Arsenic when it’s in your drinking water.That’s one of the real concern… This is not in drinking water. And there is no groundwater because you’re in this quarry situation.”

“Now that we know about it, we take steps to address it as we move forward with the project,” Siebert said, adding that discussion was needed.