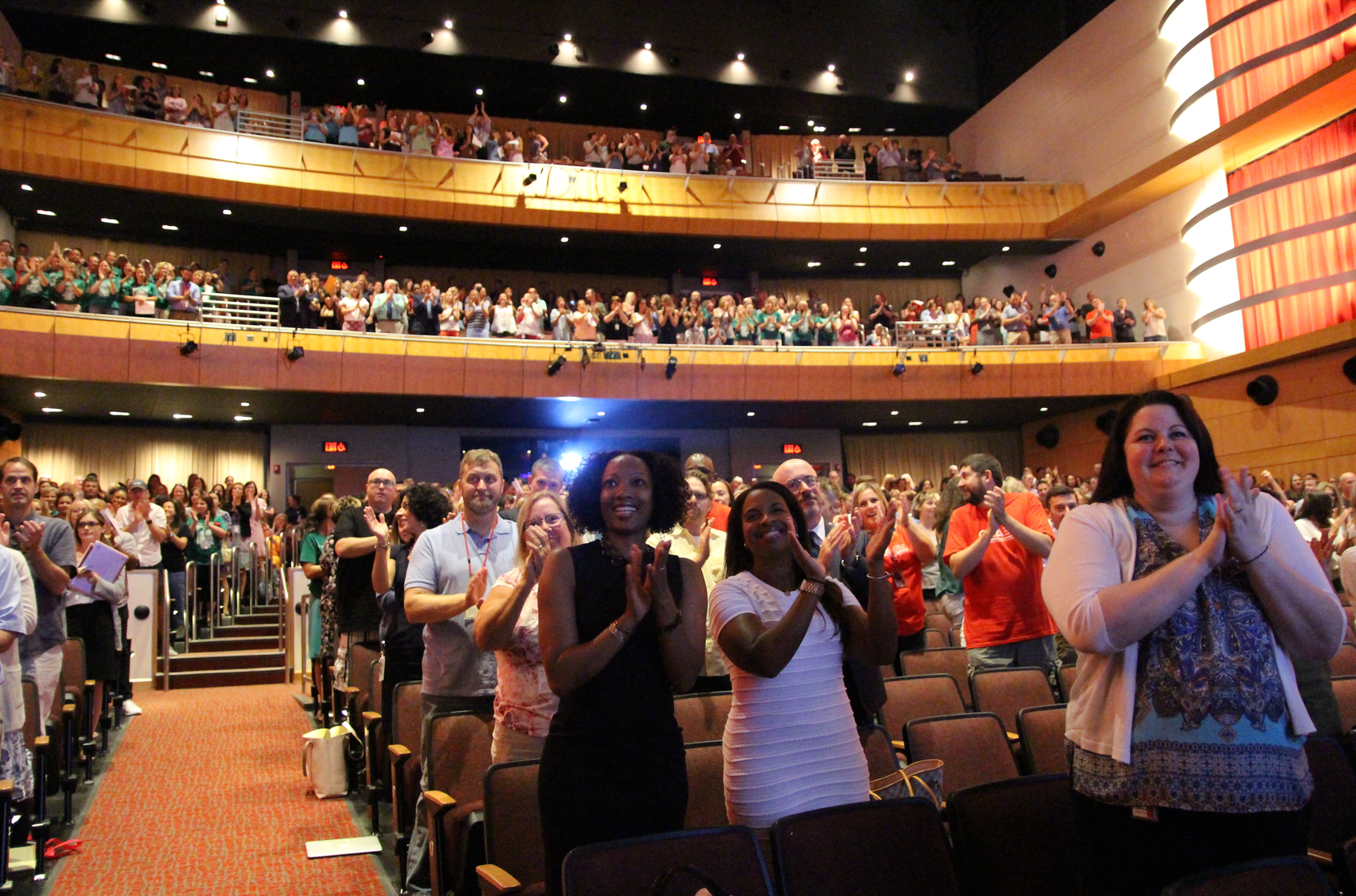 At Monday morning’s convocation ceremony for Greenwich Schools teachers, it was early in the program that interim Superintendent of Schools Ralph Mayo received a standing ovation.

Mayo, who grew up in Greenwich and worked for Greenwich Public Schools for 41 years, was upfront about the need for the District to rebuild community trust.

“We do care a lot but some times we don’t show it,” he said. “We need to go out this year and show them how much we care about them.”

The rest of his remarks had the theme of building individual connections with students.

Mayo said he remembered the names of at least a dozen Greenwich teachers from when he was a student. He said they were people he made amazing connections with. 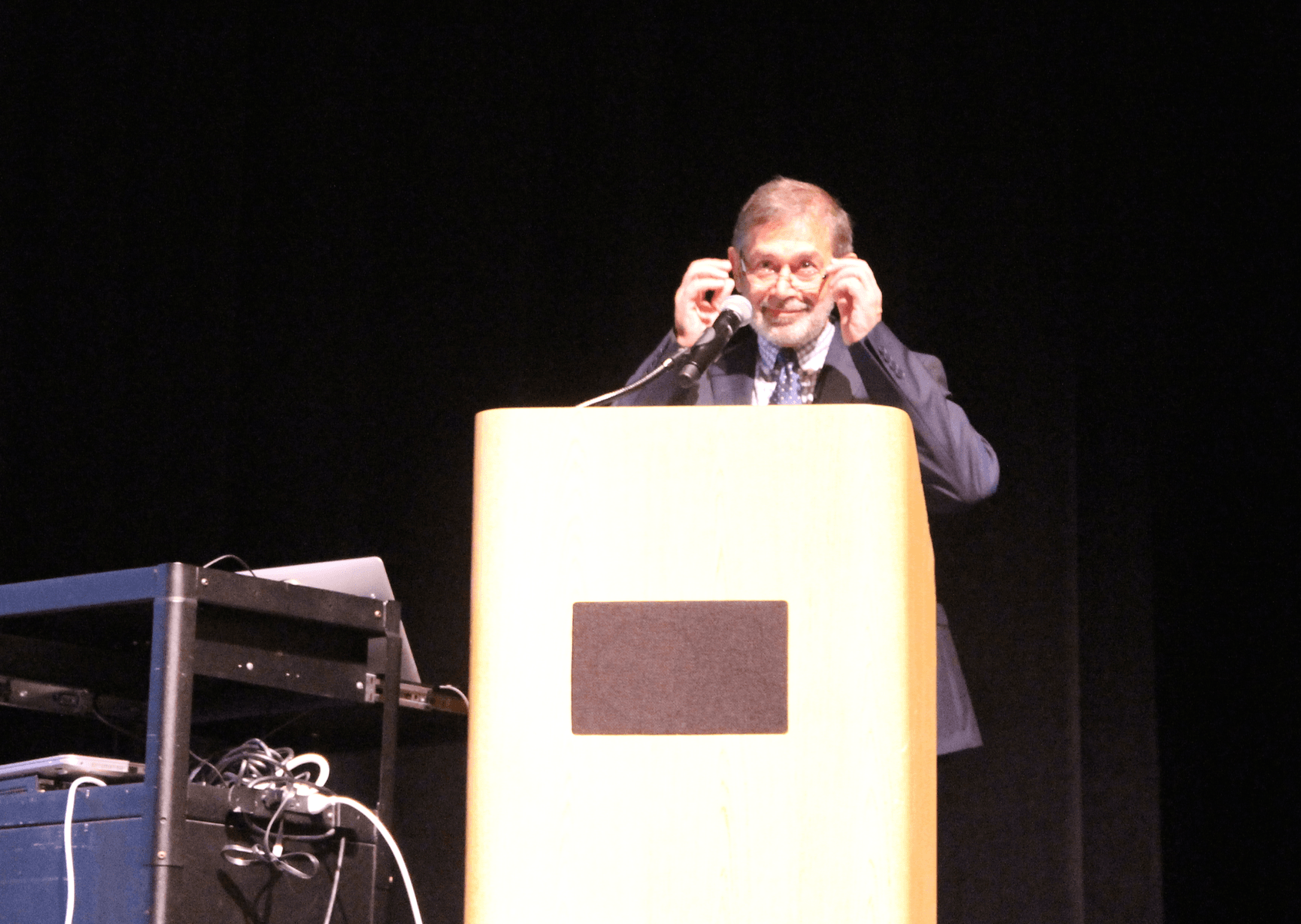 Mayo said his first grade teacher Mrs. Armitage had made more of an impression on him than anyone besides his parents.

He described the day in kindergarten when he was five that he wasn’t sleepy during nap time. He left his nap mat and headed for the door.

“Our teacher was distracted getting the milk ready for when we woke up, and I saw that shiny brass doorknob and said, ‘I’m not really sleepy, I’m going to take a walk.’ I grabbed that doorknob and walked out of Byram school, crossed the Post Road, went along Windy Knolls and finally arrived at Arther Street,” he said as hundreds of teachers in the performing arts center gasped.

“The look of shock on my mother’s face when she opened that door! She didn’t say anything. She just grabbed my wrist and we started walking back to Byram School. She had forearms like Popeye. By the time we reached Byram School my hand was purple and I couldn’t feel it. I walked into the principal’s office with my mother. He had a few words for me and asked me to come around the desk to the side. In his drawer was a rubber hose. He said, ‘If you ever leave school again, you get this. And next year in school you’re going to have Mrs. Armitage.'”

Mayo said all summer long his brother tried to instill a dread of Mrs. Armitage. But the end of the story was was not about a mean, strict teacher.

“She made a connection with me right away. She knew she had to channel all that energy because I could not sit down for five seconds, ever. She took my energy and figured out that I was competitive and said, ‘I challenge you to finish this reading box in so many weeks. Then I’m going to give you time to play blocks.'”

Mayo said that teacher tapped into his energy and competitiveness and he rose to the occasion. He credited his teacher with his lifelong love of reading.

“She made that connection to me, taking me from being a runner to getting me back to school,” he said. “Make those strong connections to those students so they want to come back every day.” 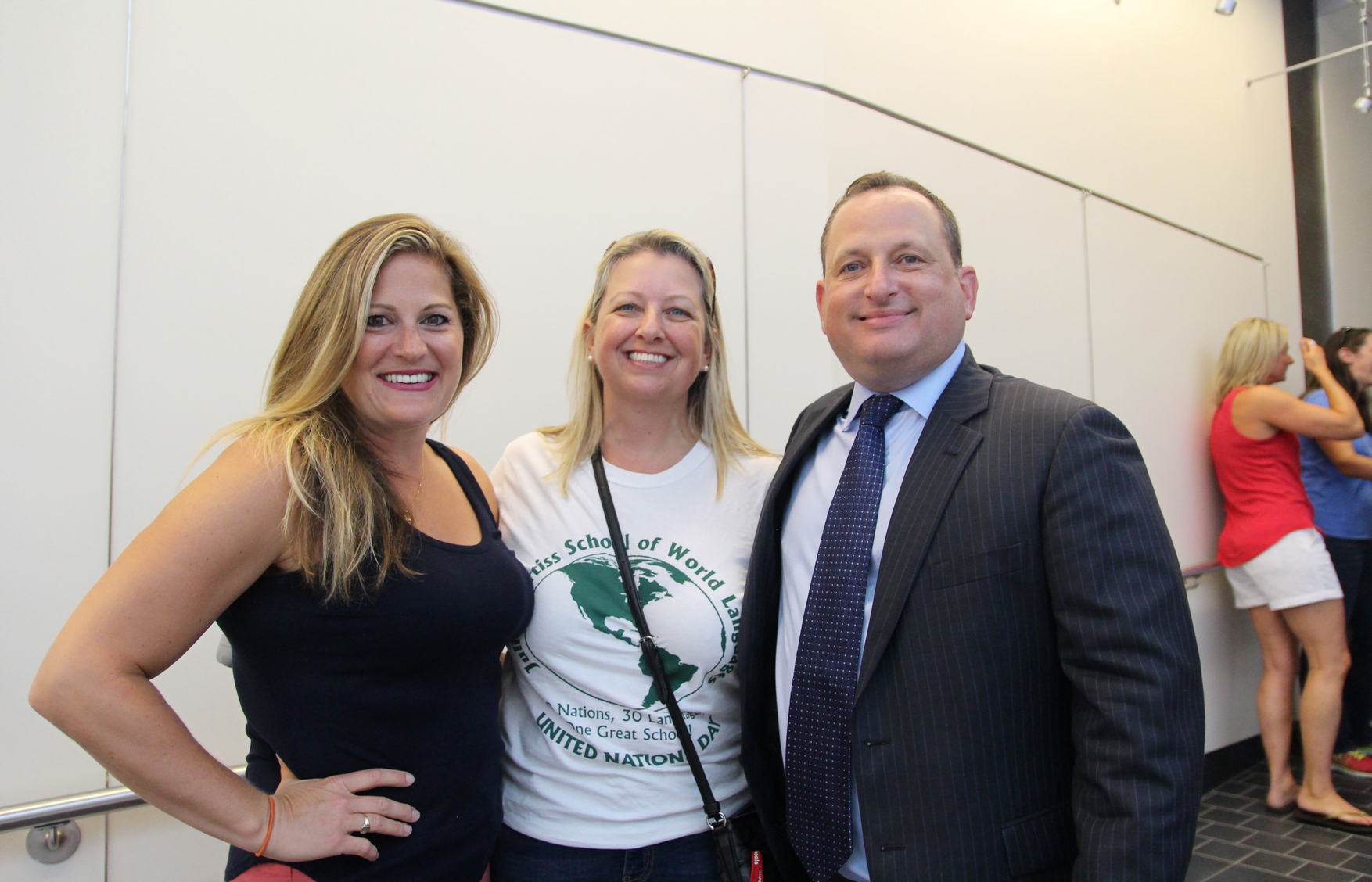 “The rest of you. In each and every building, no matter your grade level or what you do in the school, I would ask you to embrace and collaborate with the new teachers.  You are all a team, from pre-K, all the way to high school,” he said to the 1,000+ teachers gathered in the PAC. “You are the continuum that helps our students achieve academically and ultimately be the vision of the graduate when they leave us. We’re all in it together.” 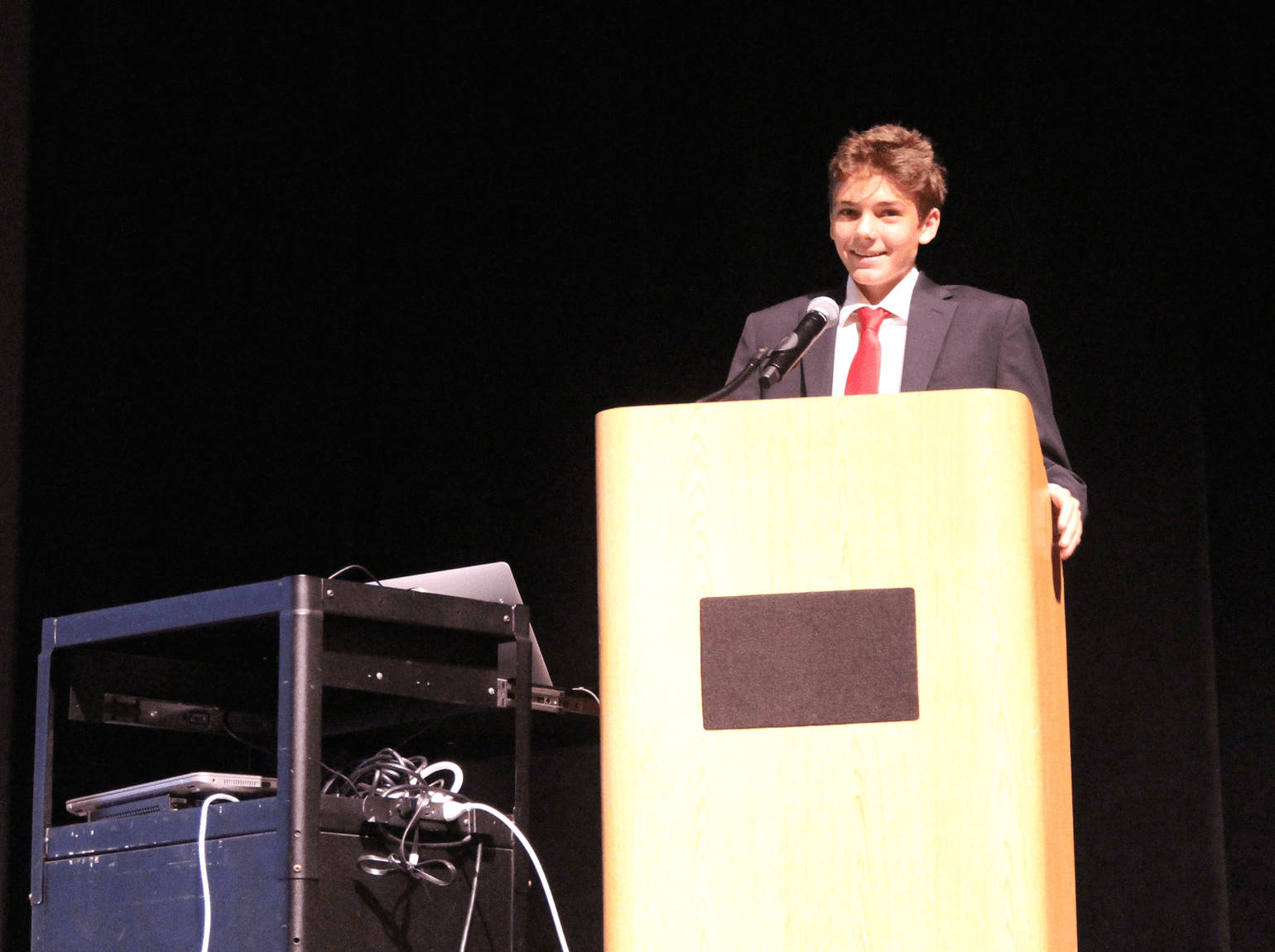 “This is of course the earliest I’ve woken up in like 60 days,” joked GHS student body president Alexander Kosyakov, who went on to address the many recent personnel changes in Greenwich Schools. “First, Dr. Winters, you will be sorely missed at GHS. You have done so much since 2009 to think and act upon the school’s philosophy of freedom with responsibility.” 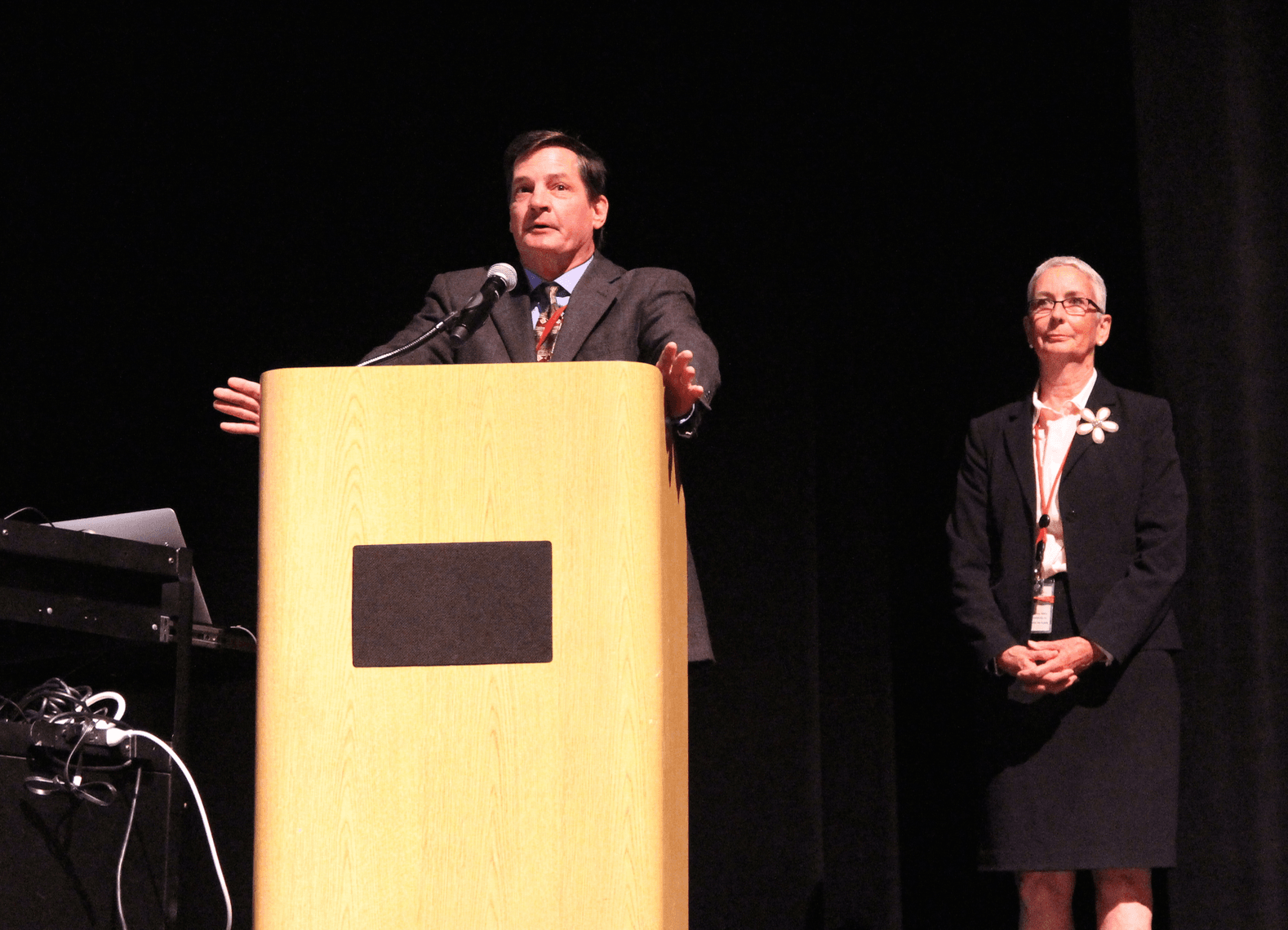 “You’ve already done so much since starting at 1984 as a Chemistry teacher,” he said. “I think you’ll be happy to know that four of the nine GHS executive committee members, including myself, took AP Chemistry last year.”

Kosyakov said he recently took the SAT at Naugatuck High School, where he registered in a room they call The Hall of Legends.

“It was full of display cases with memorabilia linked to famous Naugatuck alumni,” he said. “It got me thinking. Greenwich has seen pro football Hall of Famers, Nobel Prize winning economist and Olympic figure skaters from among its schools. Mr. Piotrzkowski has called GHS one of the finest educational institutions in the country. You can always say that’s because of the nice town, nice facilities, what have you. But I say that it all comes down to the people. Teachers who do their very best for the students, Administrators who care about students. The BOE who lets someone like me speak at their meetings.” 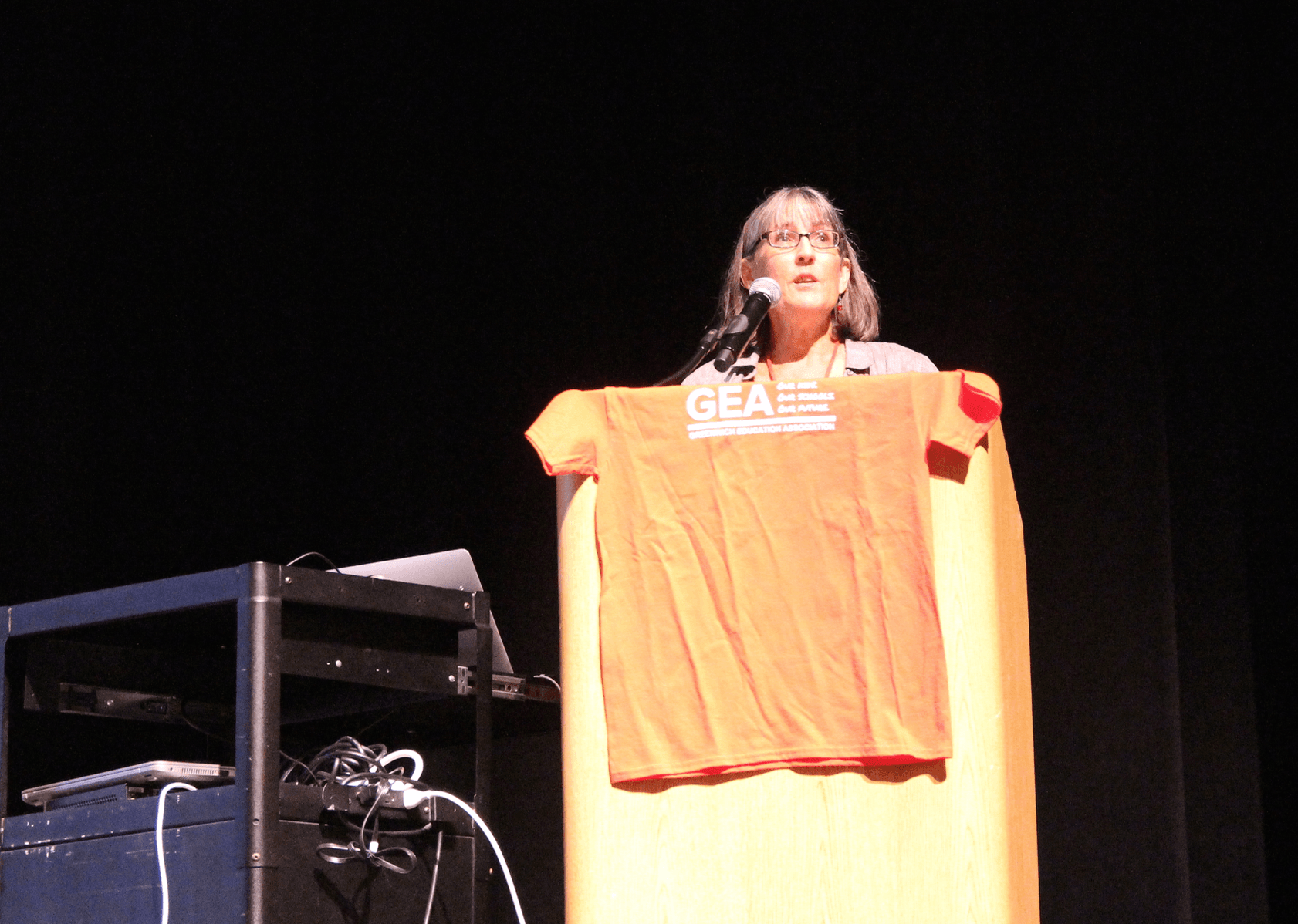 Greenwich Education Association President Carol Sutton said the GEA slogan for the year is GEA: Our Kids. Our Schools. Our Future.

Sutton pointed out that interim superintendent Mayo is perhaps the first ever superintendent who came up through the Greenwich Public Schools himself, and was once a member of GEA.

“Ralph is truly one of us,” Sutton said.

In a few days, she said, “We will greet students with a rich and varied curriculum – standards based, of course – innovative pedagogy, personalized learning, choices upon choices. Digital tools,  we have mindfulness, SEL, STEM, STEAM, AP, ALP … We will strive to give them everything they need, and we won’t forget the love, the hope, encouragement, understanding and patience, and more patience and more patience.”

“These intangibles are like the loopy part of Velcro. Our kids need hope and love for the other stuff to stick,” Sutton continued. “Let’s recommit to giving them what they need, and as Ralph said, to make those connections.”

Sutton implored teachers to do their part to safeguard Greenwich’s Public Schools.

“Forces arrayed against public education are out there. They are heavily resourced and highly organized,” she said, citing Wisconsin as an example.

In that state, Governor Scott Walker enacted a law called Act 10 in 2011 that gutted unions, targeting teachers in particular. The power of public employee unions to bargain was decimated and pay was cut for most public sector workers.

“Wisconsin stands as a stark example of what happens when those forces are successful,” Sutton said.  “But then comes the success stories of West Virginia, Arizona, Kentucky, Oklahoma, Colorado, North Carolina and just recently Missouri.”

Sutton said that students in Parkland, Florida had displayed the power of civic engagement and collective action.

“The future of public education is in our hands and it’s going to be a very heavy lift. But we are up to the challenge,” she said. 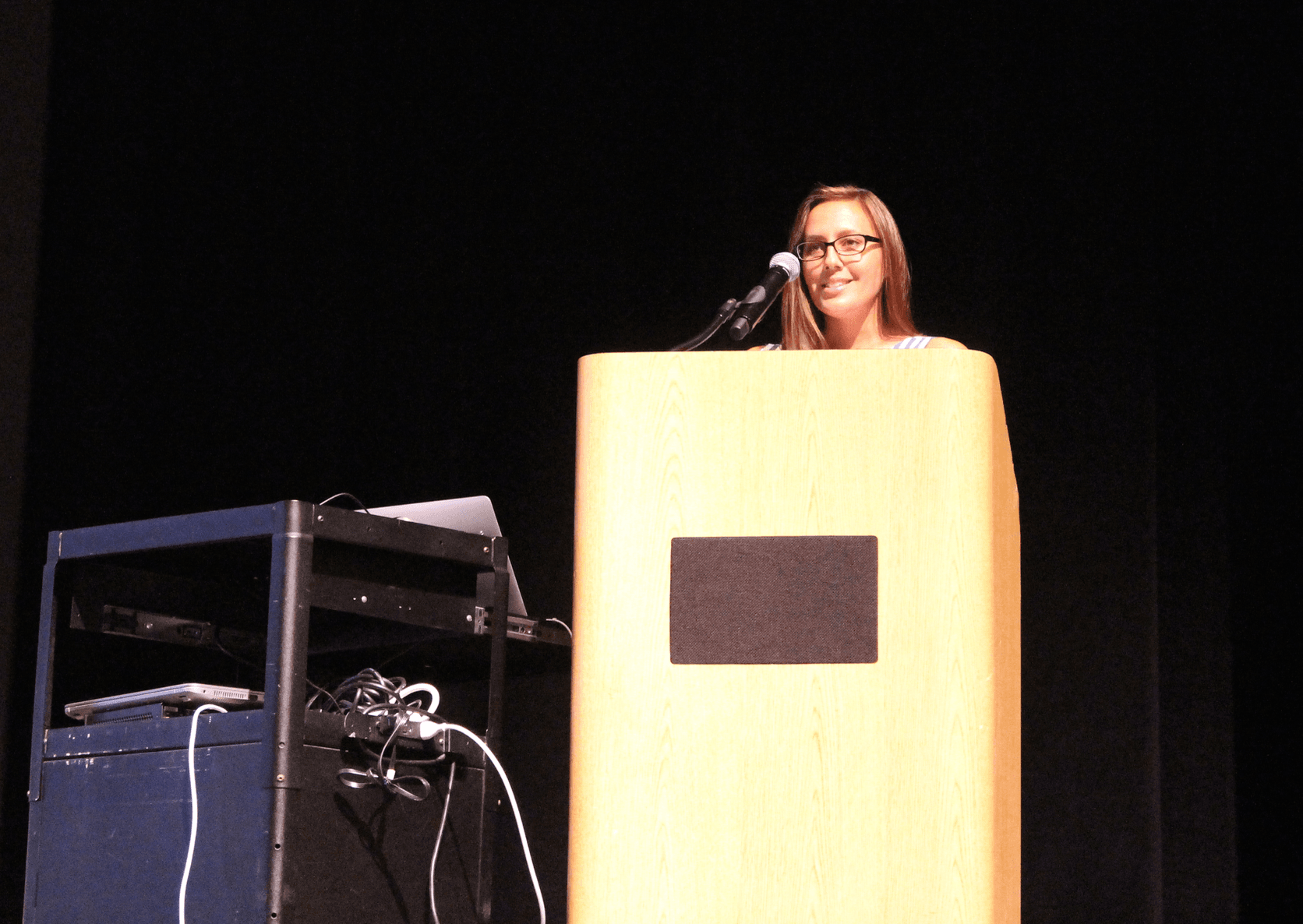 Greenwich Representative for the CT Teacher of the Year Program Michele Giorlando DeRosa, who teaches teaches English Language Arts and AVID at Western Middle School, said so much about teaching is about the spaces in between the curriculum.

“It’s easy to focus on the buzzwords of education and to get wrapped up in the latest approach to teaching or to get tunnel vision about test scores and performance,” she said.

Emphasizing the importance of getting to know students as individuals, she recalled receiving a note years ago from a shy student at the end of the year thanking her for a kind remark she had made about an essay.

“There is what we teach – the content and skills – and that’s incredibly important,” Giorlando DeRosa said. “But the highest priority has and always will be our day to day interactions with the students. What we do is just as important as what we teach.” 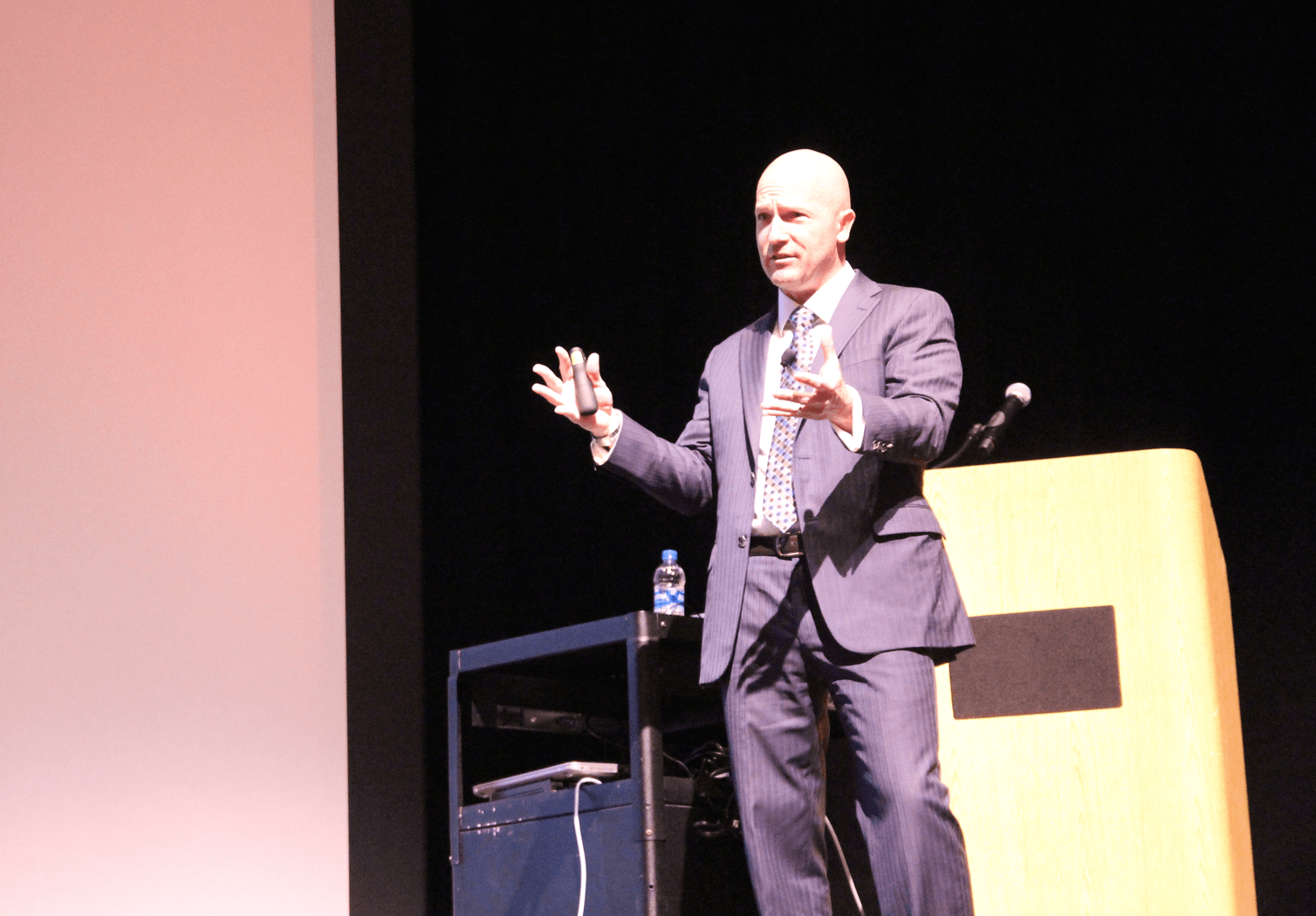 The event concluded with a keynote address from motivational speaker, Eric Sheninger, “Inspiring Students: Bringing Awe Back To Learning.” 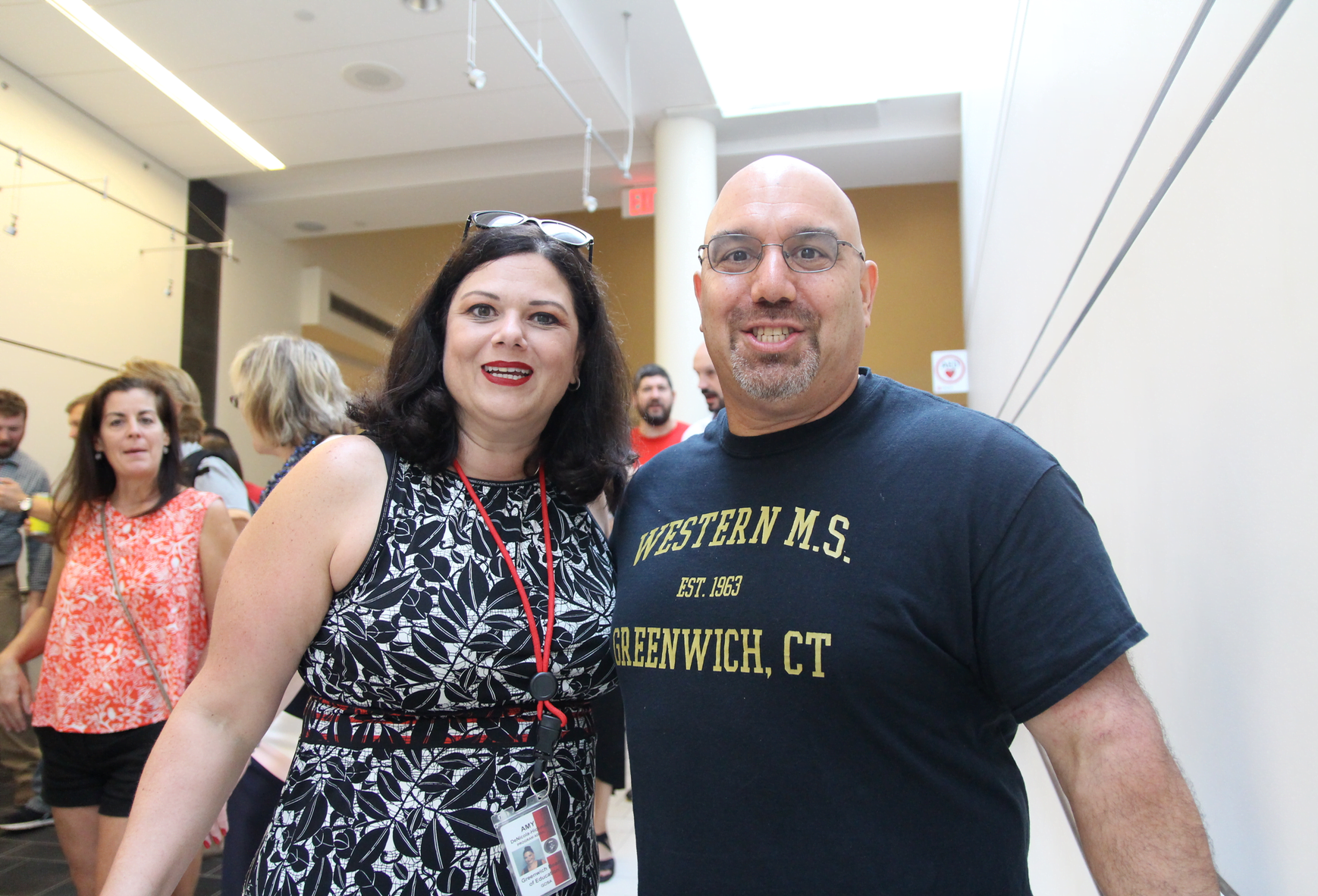 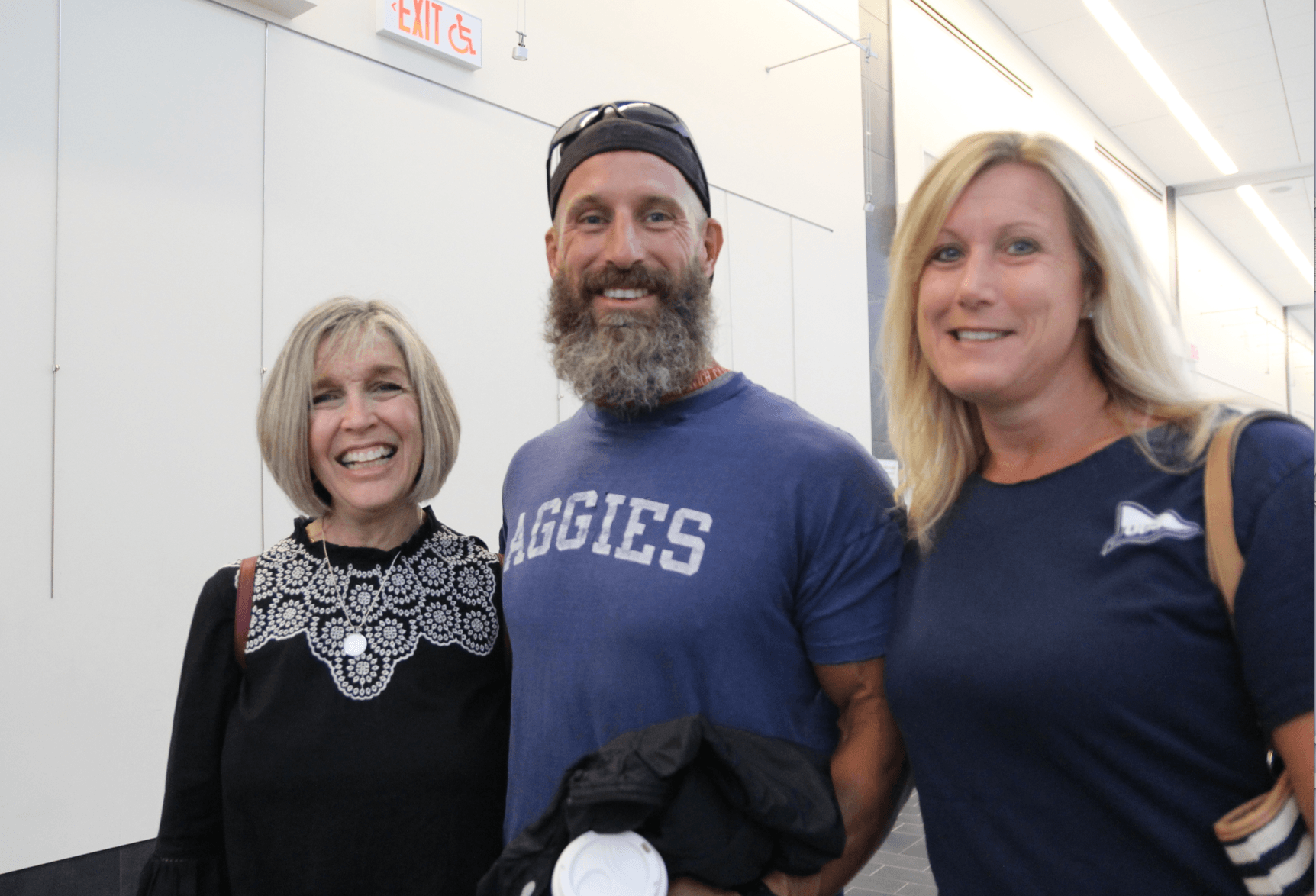 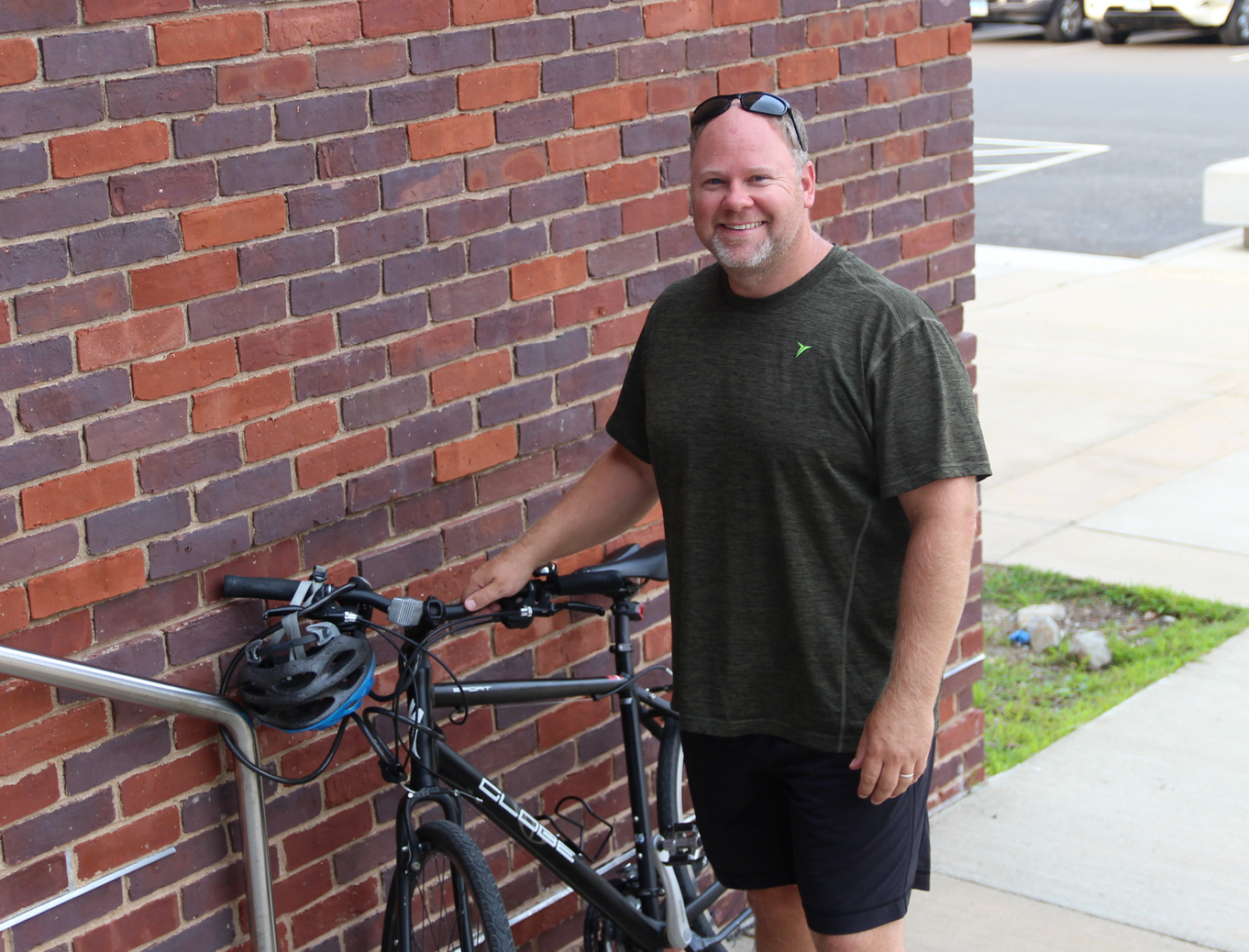 PE Teacher is the picture of fitness, arriving by bicycle to convocation, Aug 27, 2018 Photo: Leslie Yager 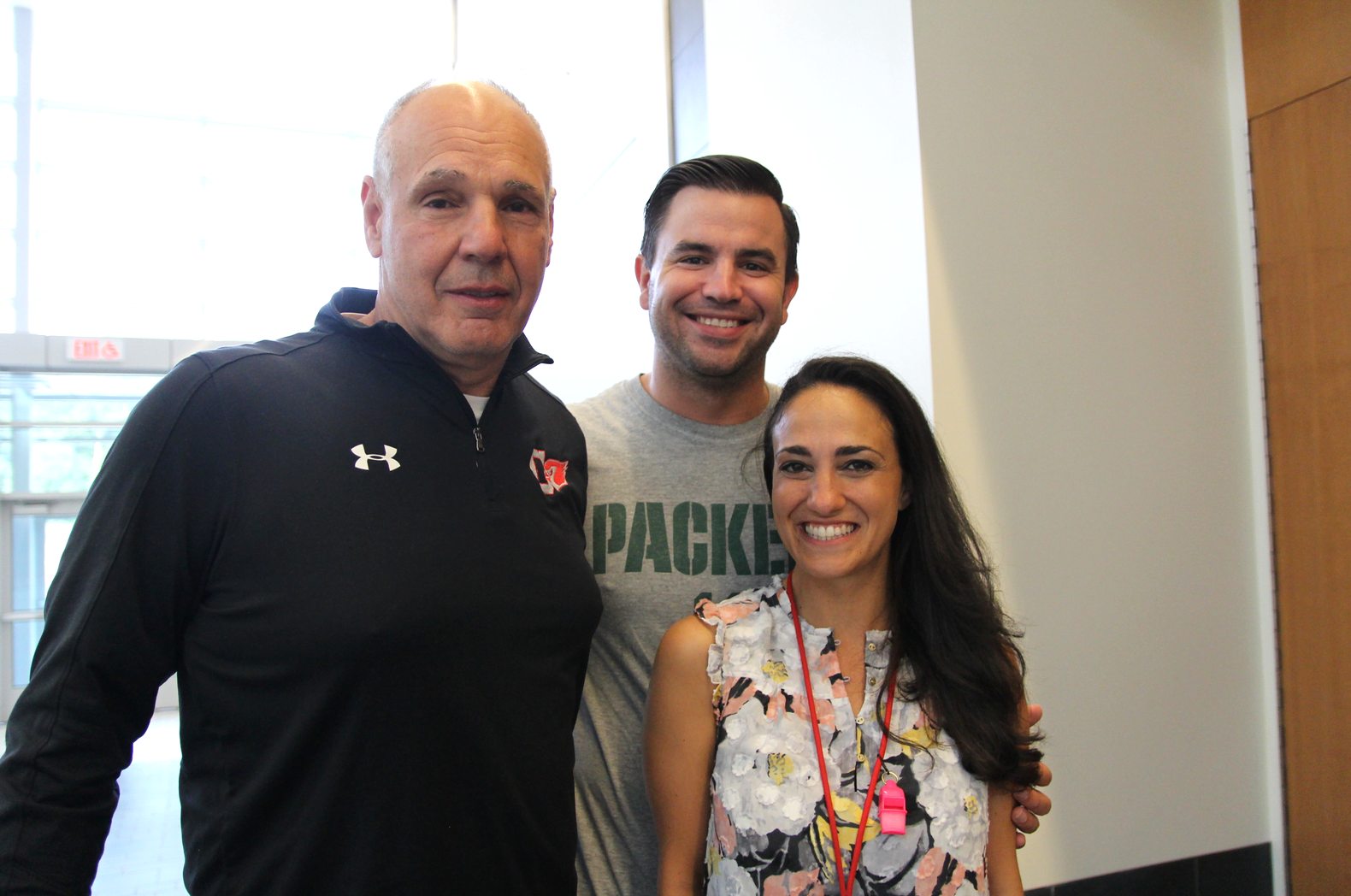 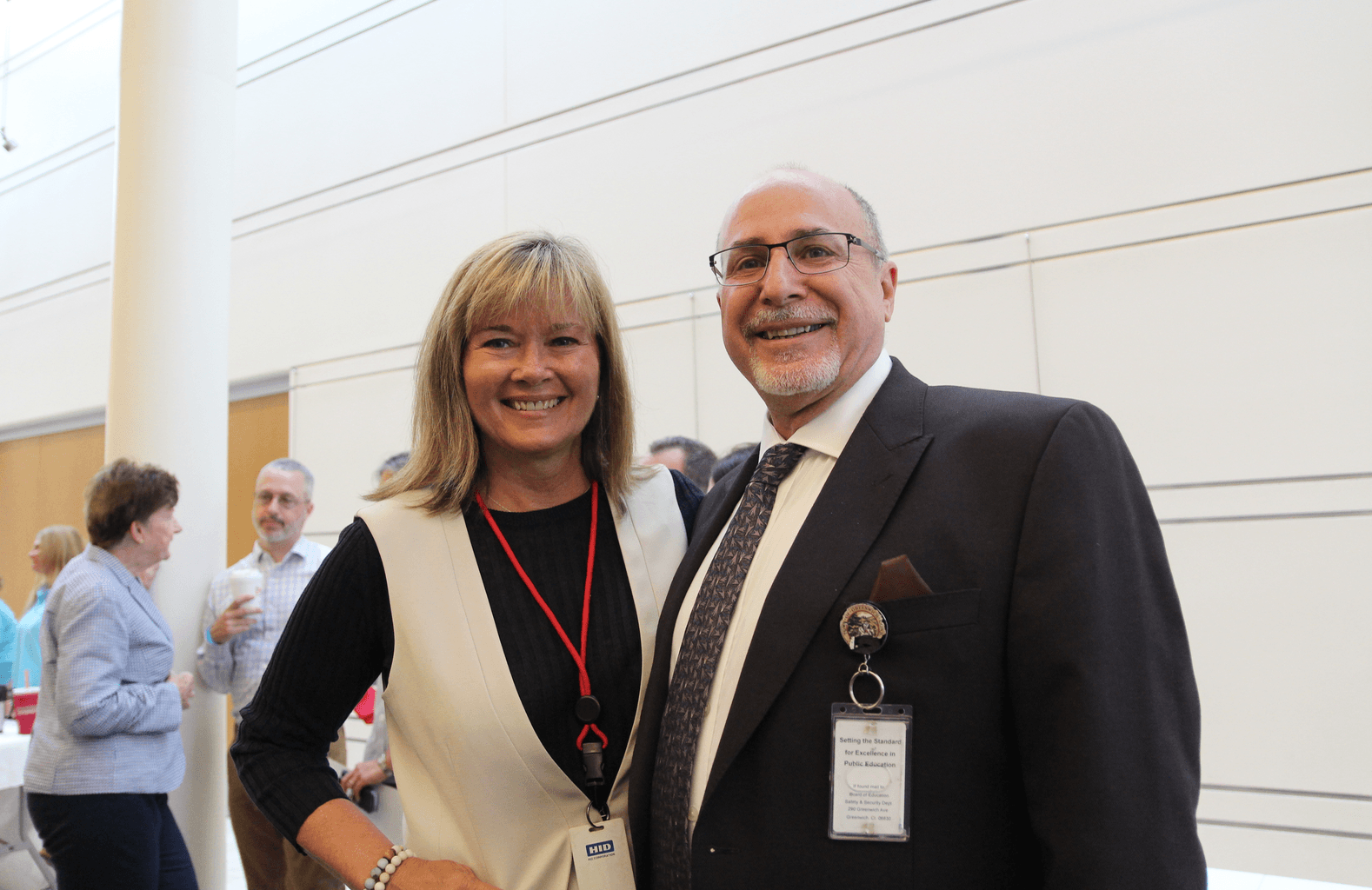 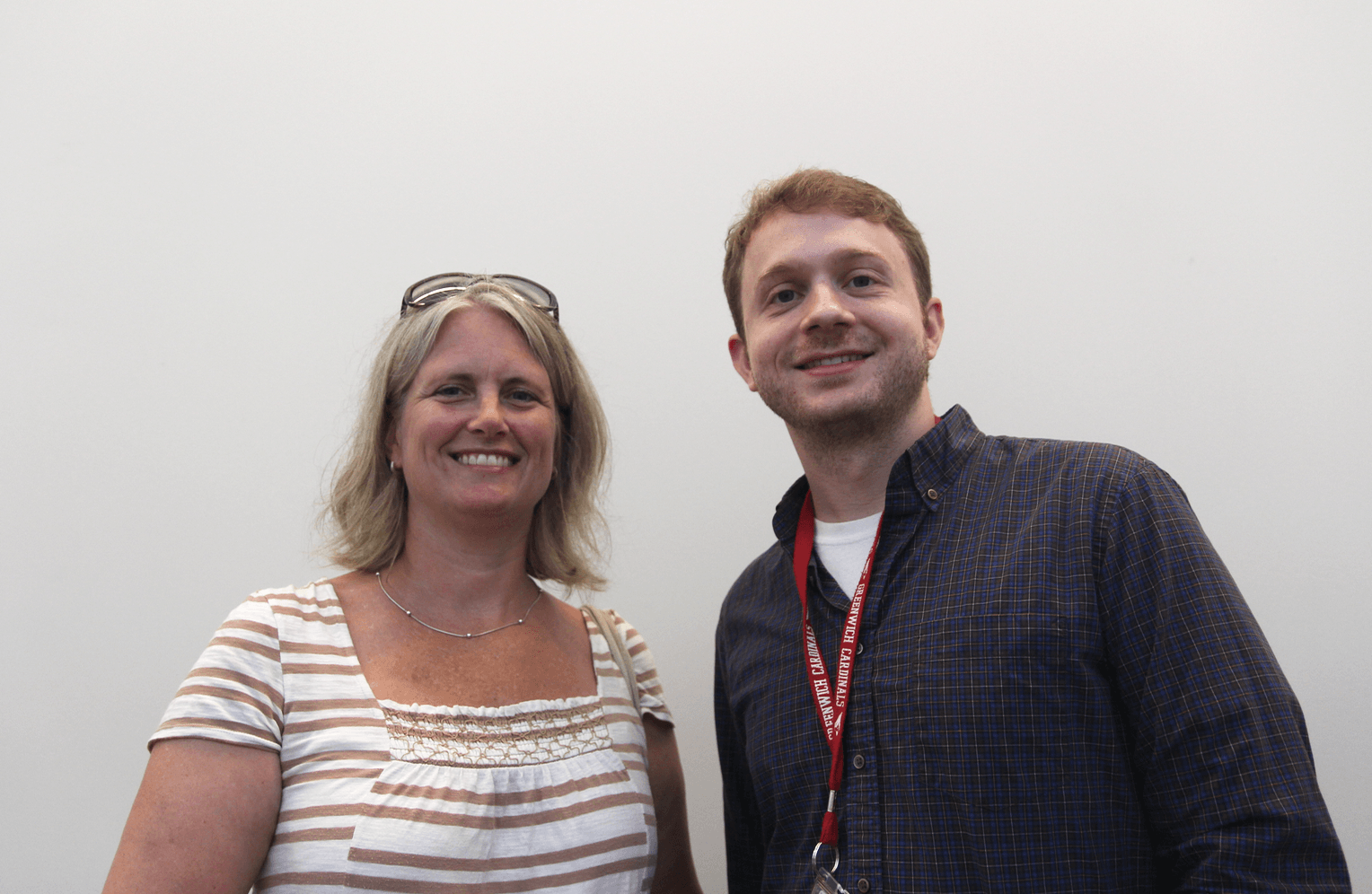 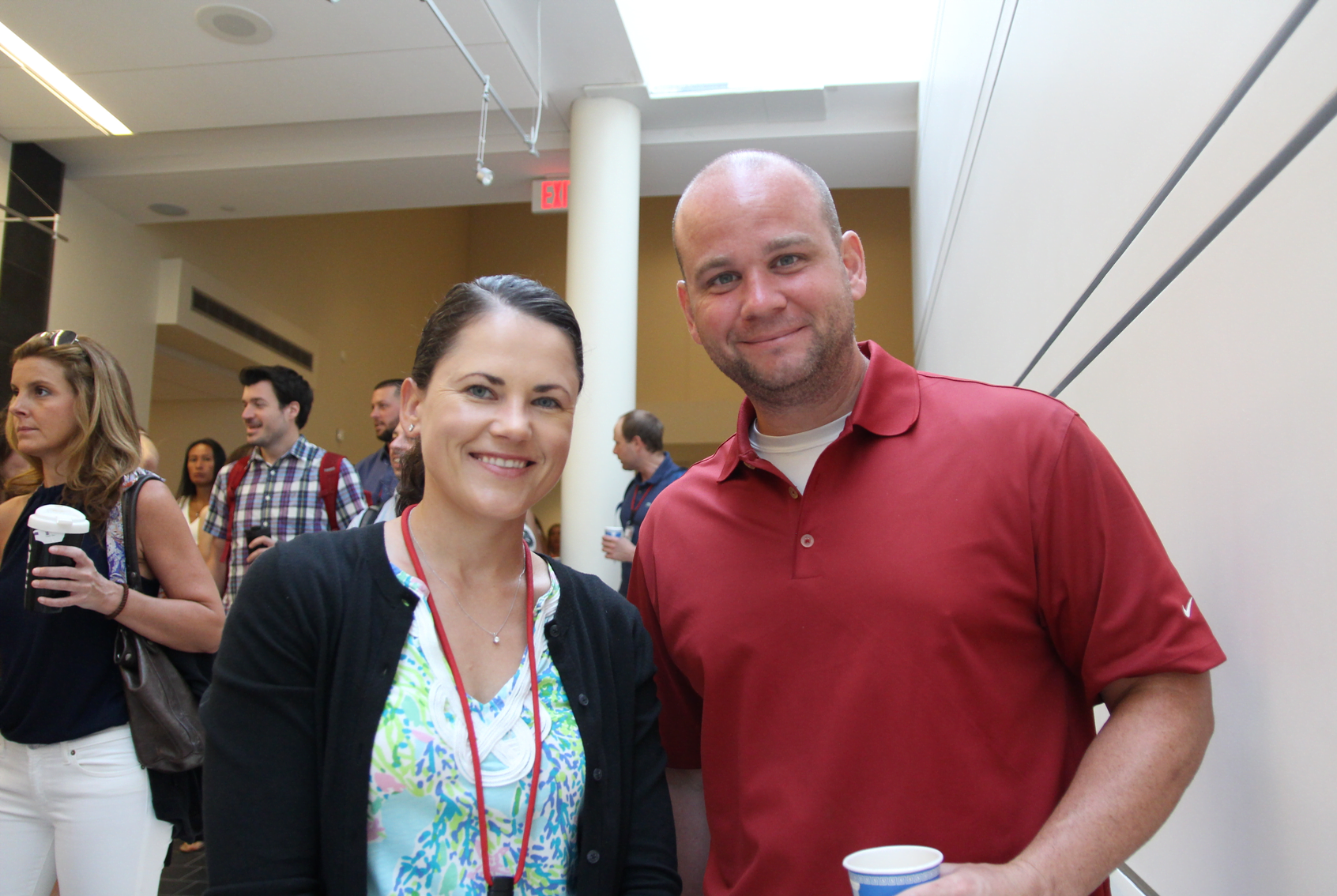 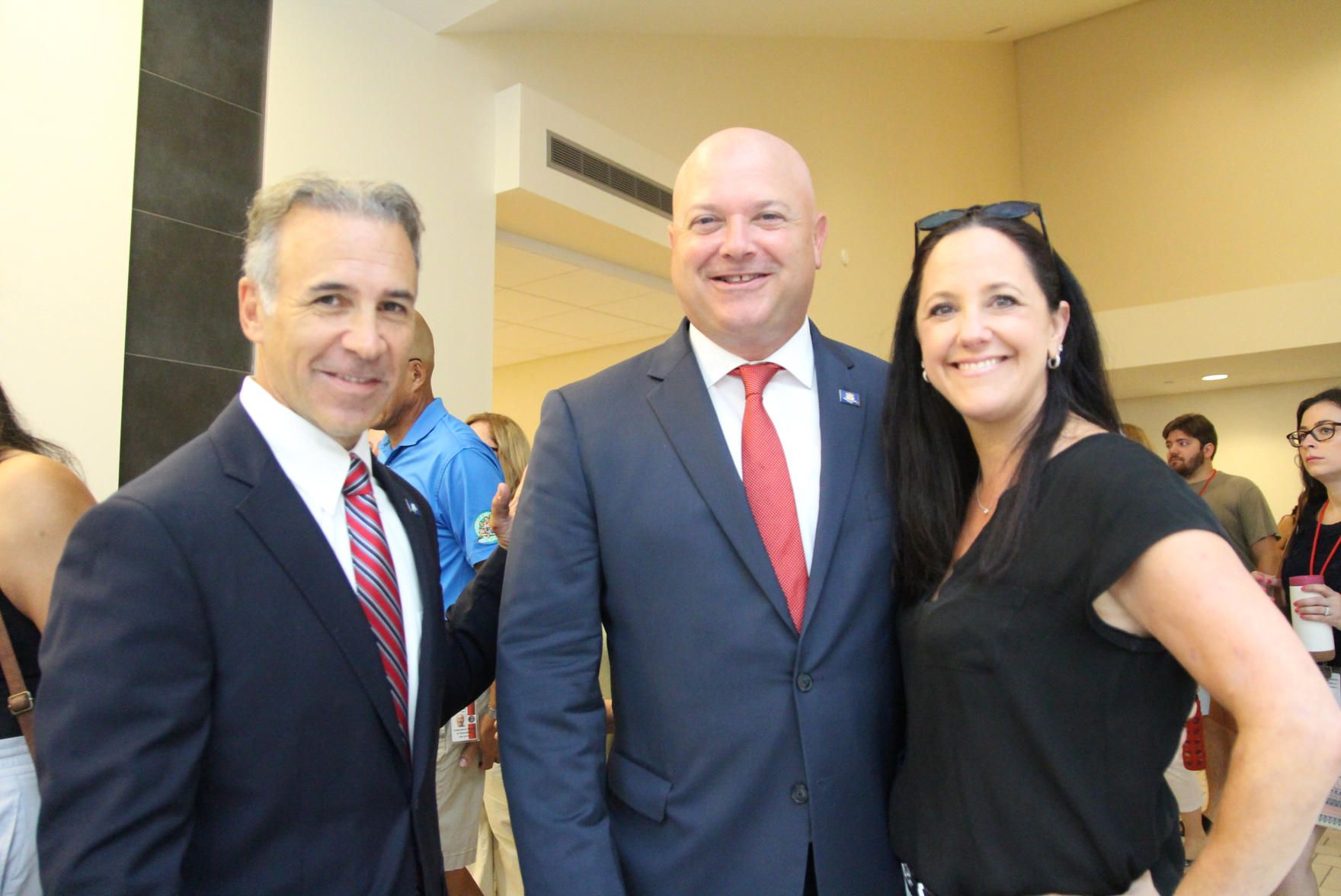 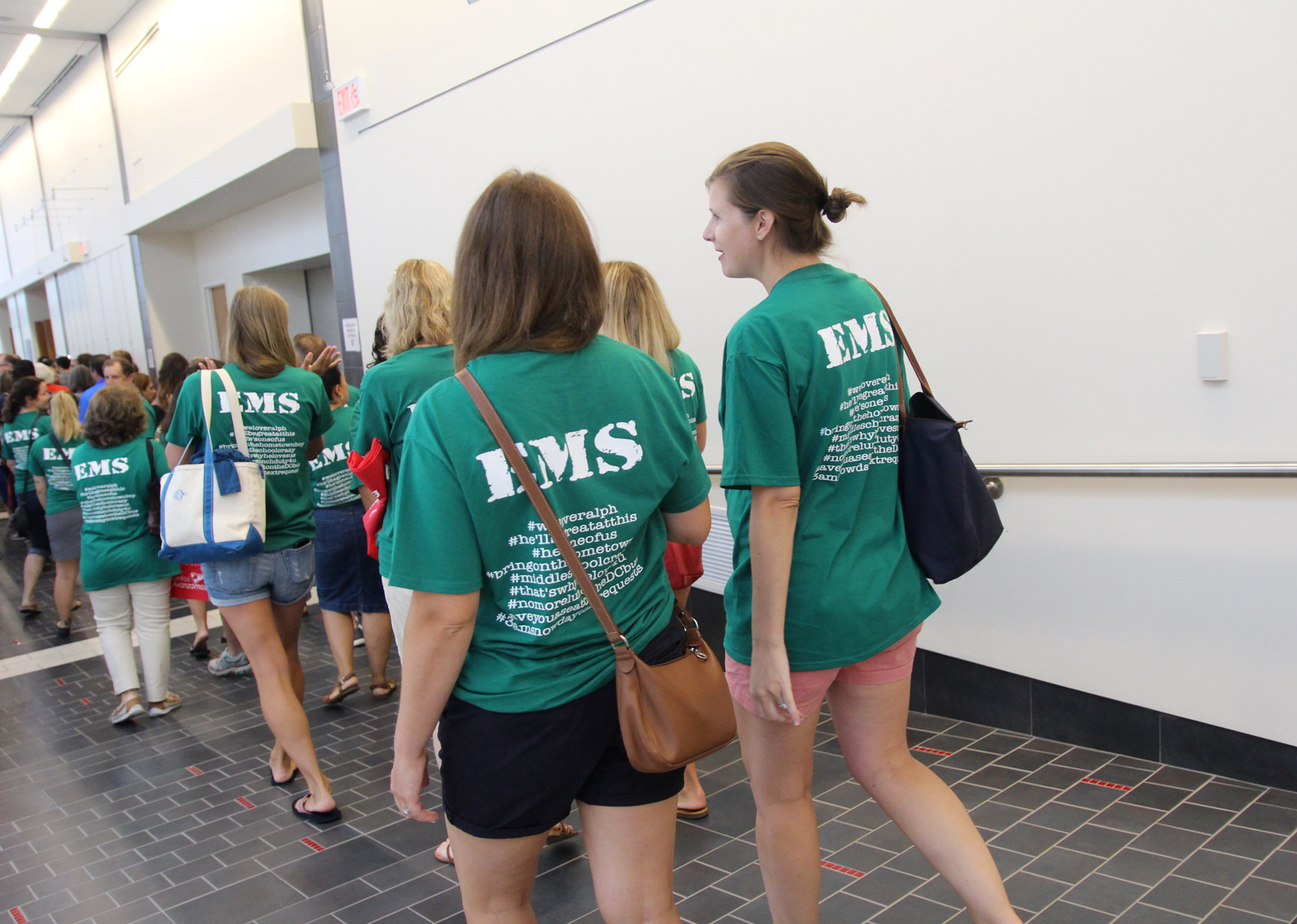 On Monday morning, over 1,000 teachers had breakfast and then streamed into the performing arts center at Greenwich High School for convocation, Aug 27, 2018 Photo: Leslie Yager 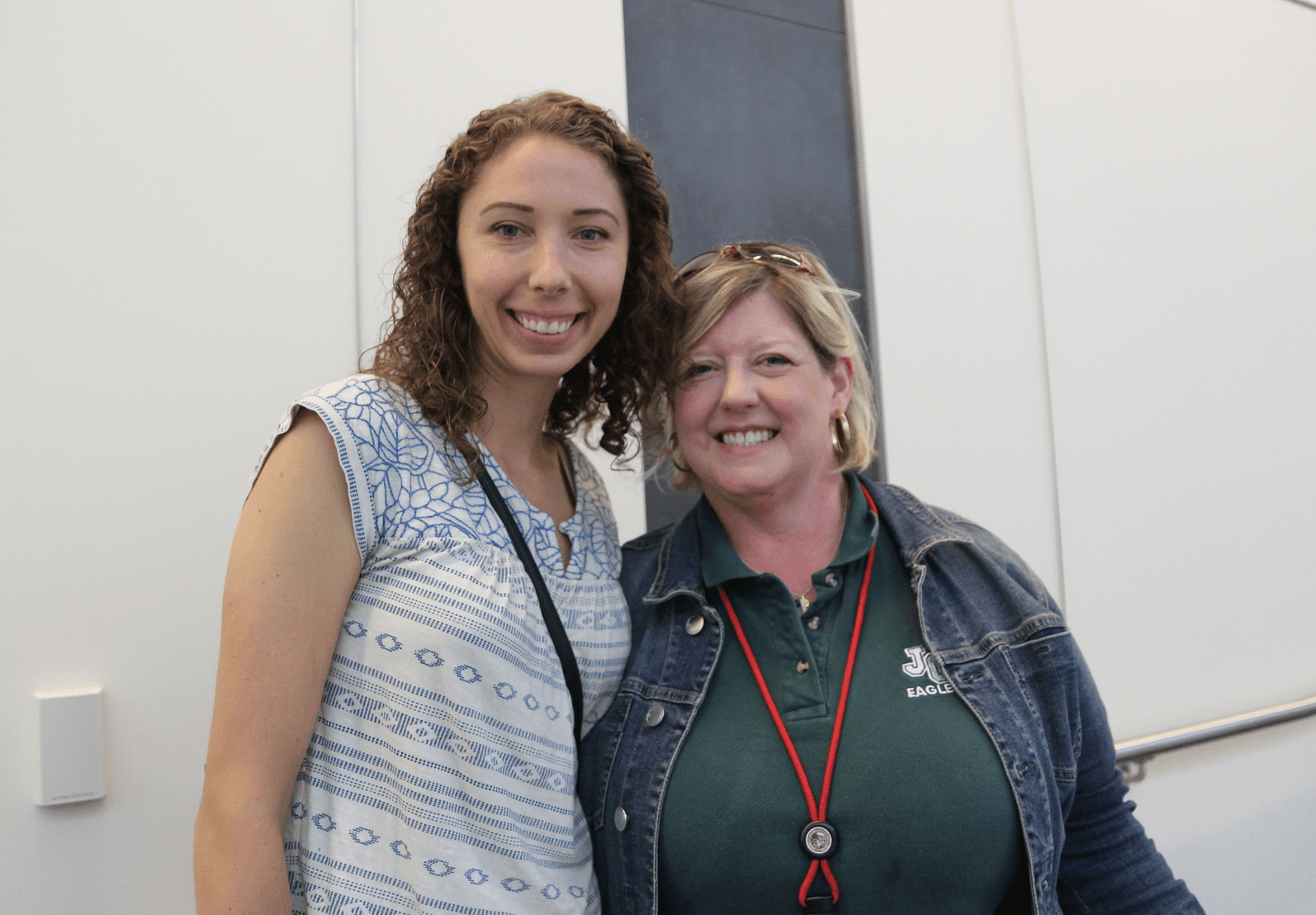 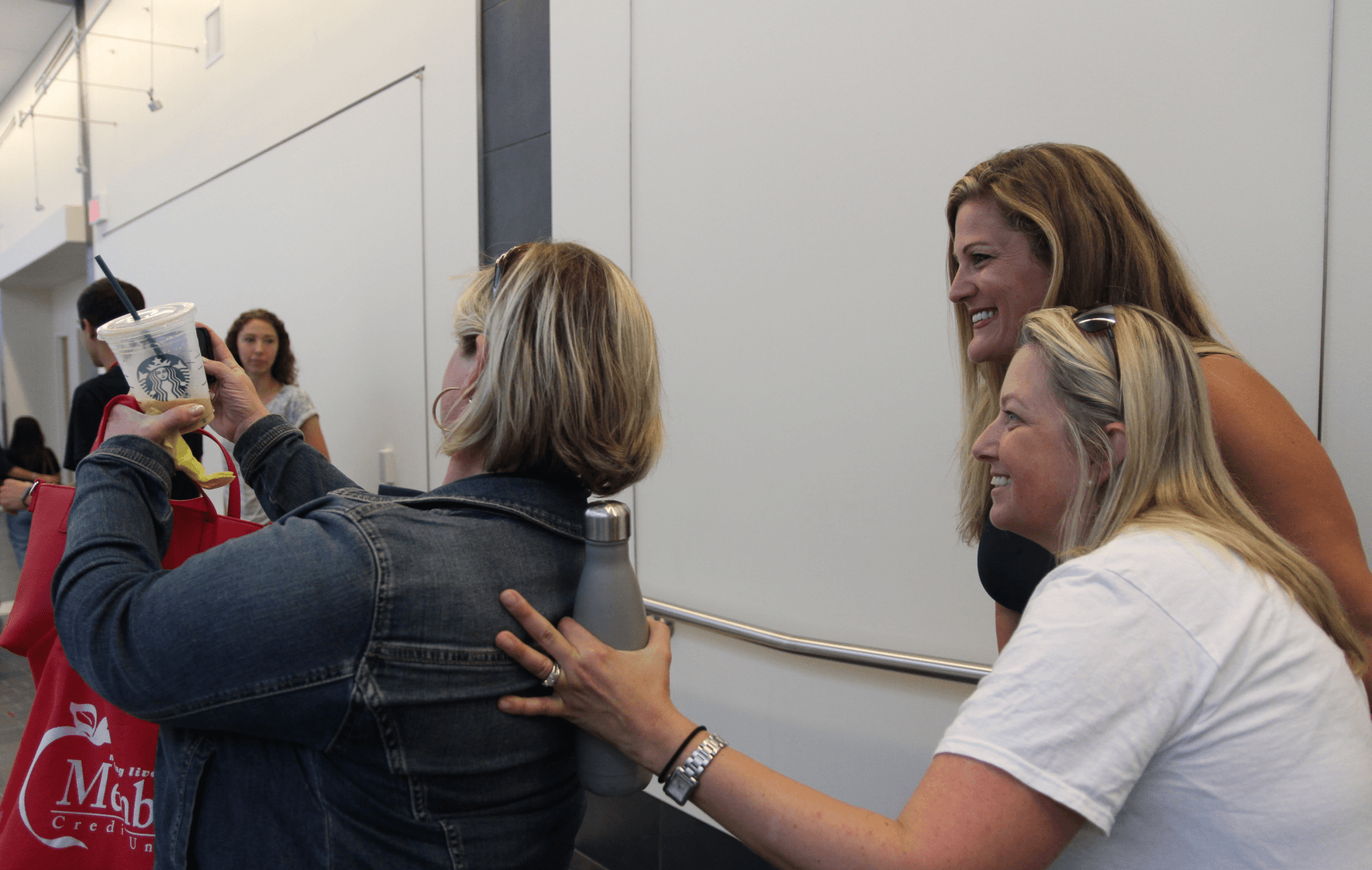 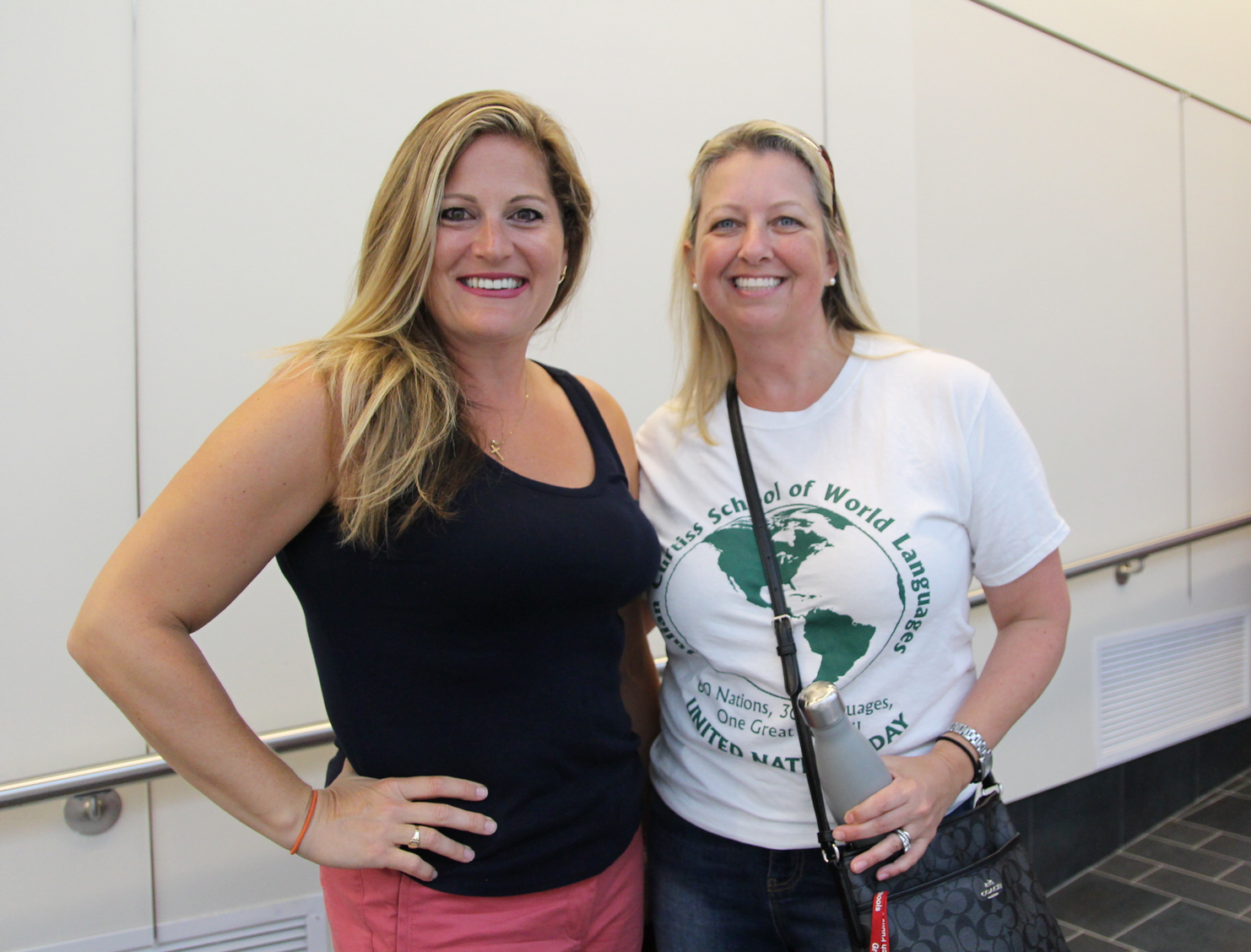