When students returned to Greenwich High School a few weeks ago, they were surprised to see there was no floor in the gymnasium. No bleachers either. 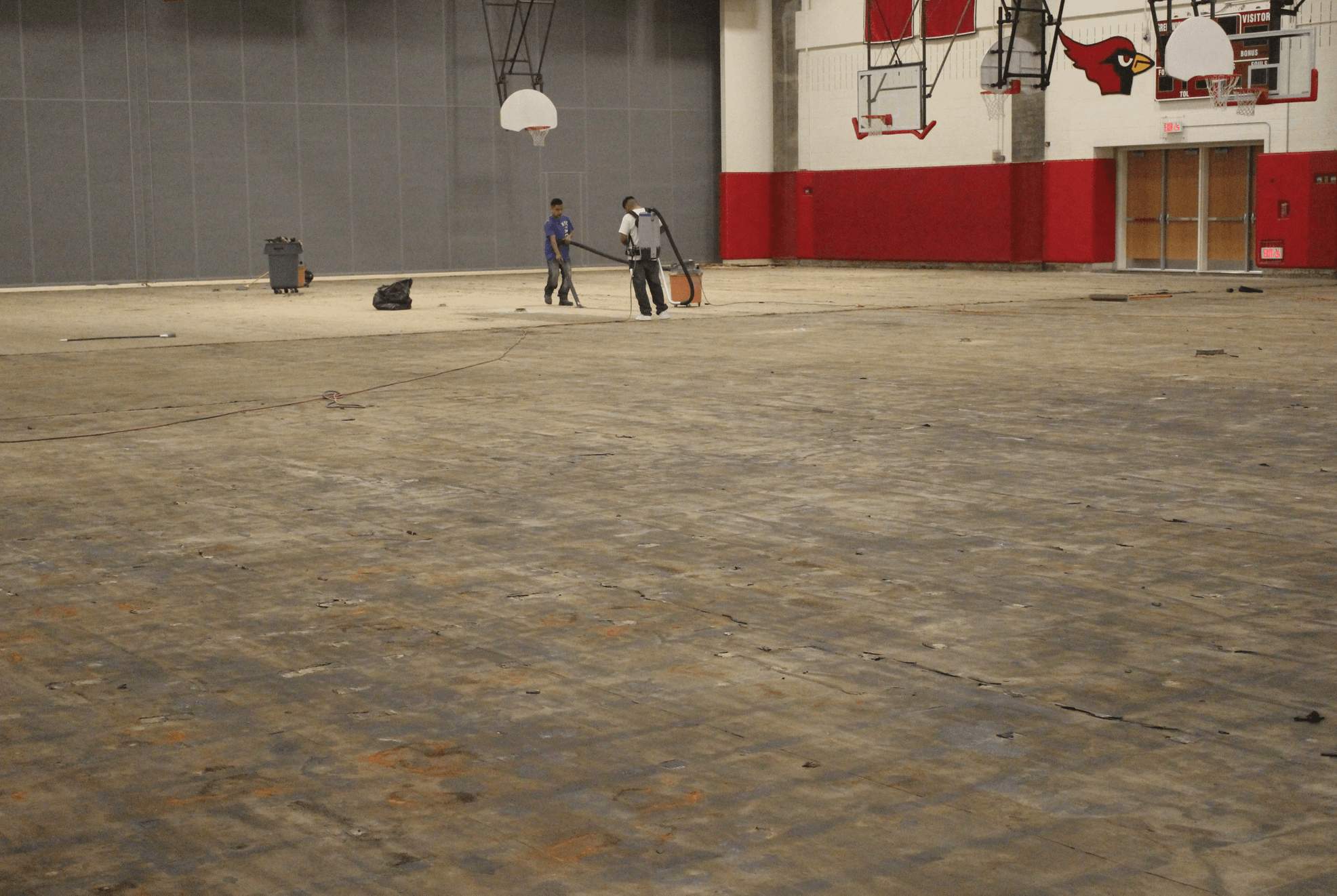 A peer mentor leading a tour for new freshmen opened the gym door, got an eye full, and steered the newbies in the other direction.

Just before Mr. Matten left, he celebrated the Greenwich Athletic Foundation’s gift of $110,000 for new gym bleachers, a generous gift for the long overdue replacement the outmoded, uncomfortable wooden stands.

Matten who held the job in Greenwich for five years, took a job with Hunter College in New York.

Before Mr. Matten’s departure, the district’s managing director of operations Jim Hricay, hired in 2015 by former superintendent McKersie, gave notice in May that he had accepted a position with the Pelham Union Free School District, in New York effective July 1, 2017.

Vendor Walks Away, New Vendor Hired
Over the summer, the company selected to replace the gym floor, Rainbow Floors, walked away.

GHS headmaster, Dr. Chris Winters said in an email that the floor replacement was to have been completed by the end of summer. “Demolition began, and once the floor was removed, the vendor did not return,” he said.

The headmaster said the district contracted with a second vendor, Dalene Flooring, who immediately began the process of completing the floor in the most timely way possible.

Right now the work is being done by the second and only other bidder on the job, Dalene Flooring.

With November 1st as the anticipated completion date for the flooring project, Winters said the new bleachers will be installed roughly two weeks after the successful installation of the floor.

Rich Fulton of the Greenwich Athletic Foundation was sympathetic.

“These things take time,” Fulton said. “We look forward to seeing the installation of the state-of-the-art bleachers donated from the GAF. It’s unfortunate the floors were not ready for the start of the school year, but we are confident that they will be done expeditiously.”

Board of Education member Laura Erickson said that managing all the summer work is always “a heavy lift” and that with the departure of both Mr. Hricay and Mr. Matten, the director of human resources Bob Stacy filled in. (Mr. Stacy came on board in 2015 to replace Robert Lichtenfeld who retired.)

“Bob Stacy really did a yeoman’s job,” she said.  Not only was the district busy all summer with the hiring process, but the new superintendent Dr. Jill Gildea started on July 1.

“It is really unfortunate the timing slipped on the project but I am glad we are getting it done instead of waiting until next summer,” Erickson said. “I hope the fall teams are being accommodated appropriately and as best as possible with all the games and practices that need to be scheduled.”

As long as the weather holds out, high school gym classes can take place outdoors.

If the school does indeed have use of the gymnasium by Nov 1, that would be just in time for the start of basketball season, which has a spirited fan base and draws large crowds to fill the bleachers.

In the meantime, last week Greenwich Schools announced that Daniel Watson would start on October 2, 2017 as the district’s new Facilities Director. 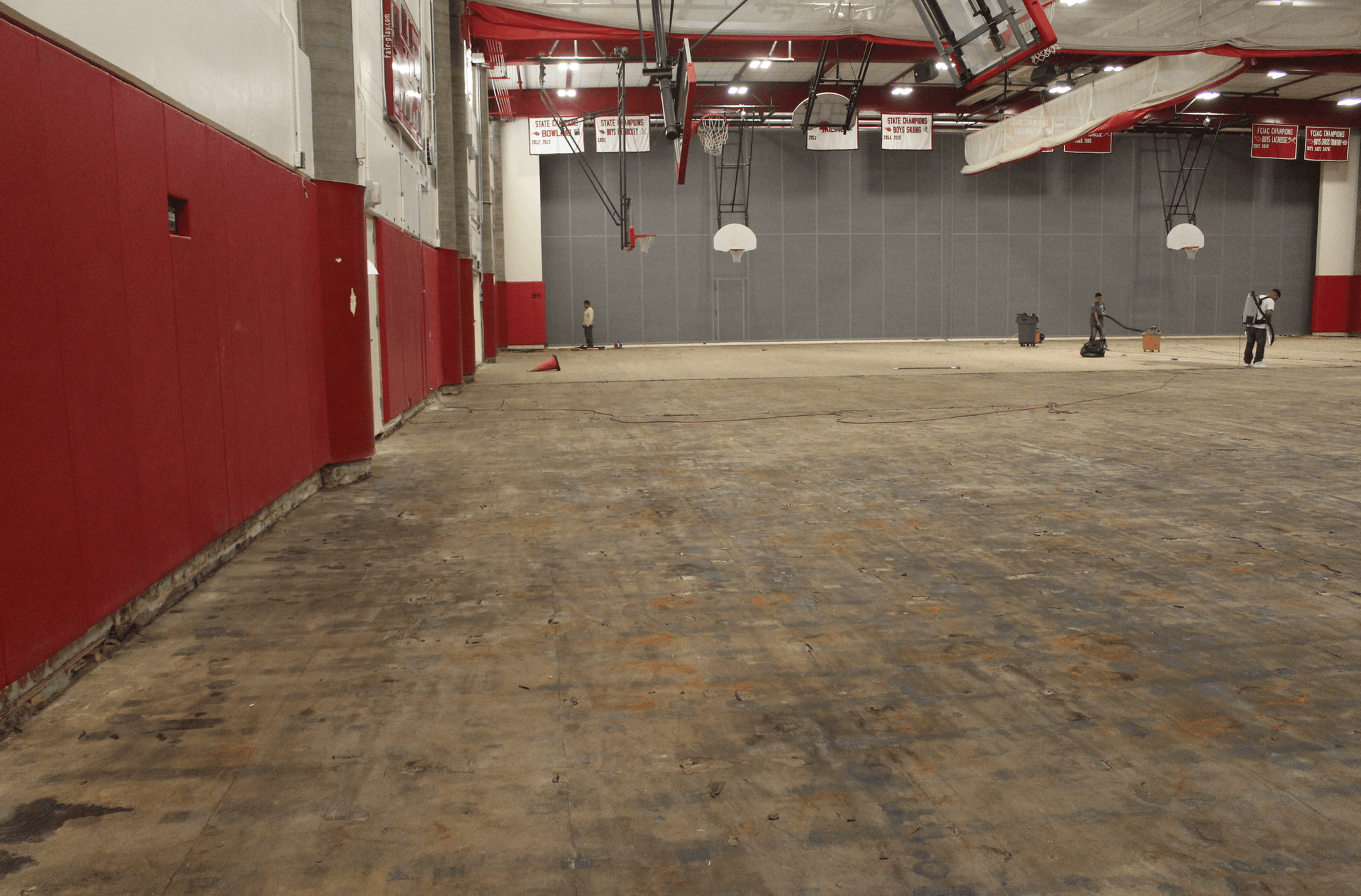 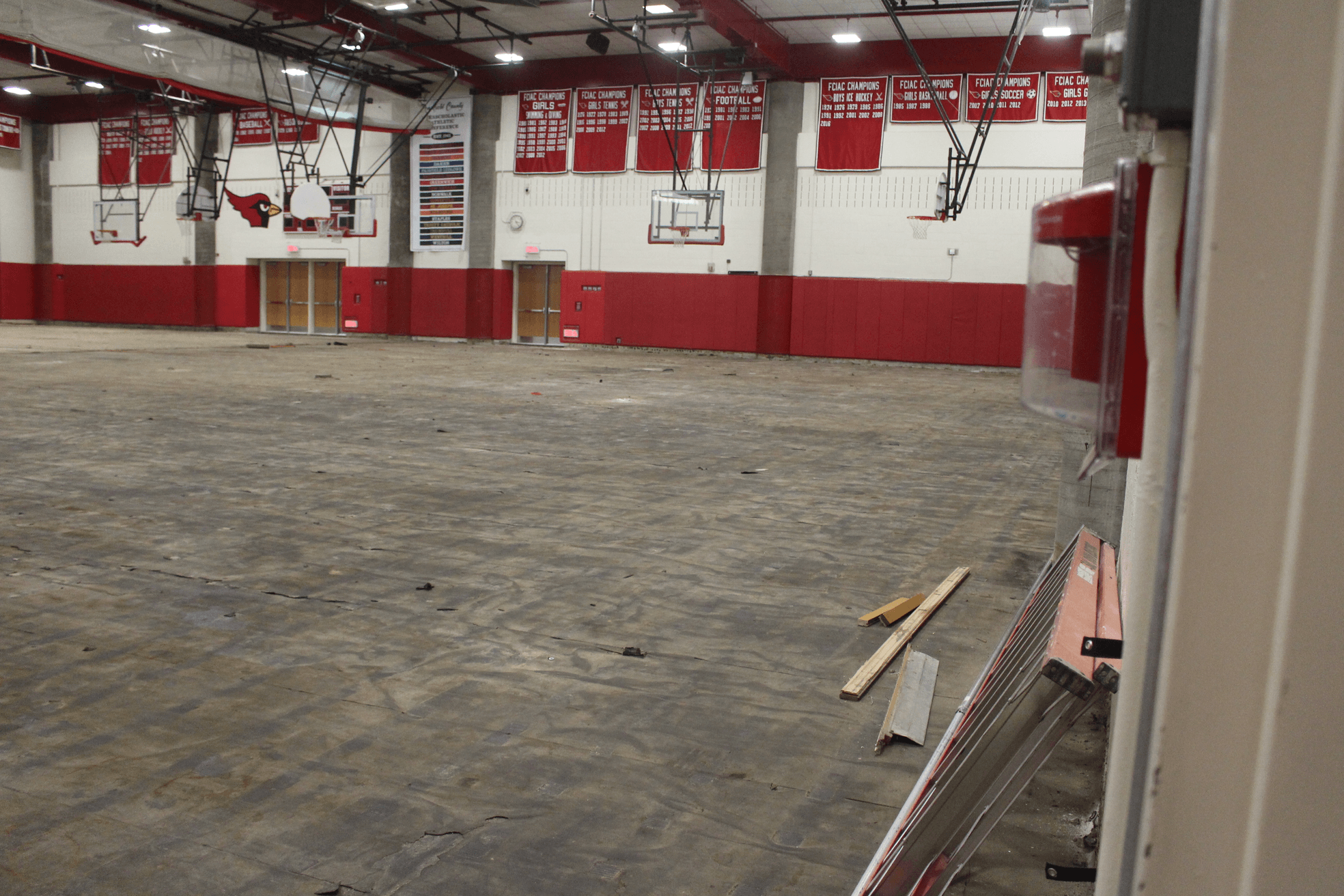 The raw gymnasium floor where bleachers paid for by the GAF will be installed about two weeks after the new gym floor is in place. Photo: Leslie Yager