On Monday night the RTM voted to approve the 2019 Plan of Conservation and Development, which was a surprise.

There had been much talk about postponing the vote. In fact, four committees had voted for postponement.

Earlier in the day, RTM Moderator Pro Tempore Alexis Voulgaris said on WGCH, “I think RTM members just want a little bit more time to read into it before they weigh in. …It’s a big item, and we’ll likely put it to the following month.”

Among those advocating for a vote Monday night were LWV president Sandy Waters, past LWV president who is head of the Tree Conservancy JoAnn Messina, Conservation Commission’s Susie Baker, former P&Z chair Louisa Stone and  Francia Alvarez, who spoke as a member of the Land Use Committee and as a resident.

P&Z director Katie DeLuca said she was pleased with the vote. “My sense is that hearing speaker after speaker explain the virtues of the Plan, the hard work and outreach that went into it, and the desire to move it forward, was ultimately what swayed the majority from voting for postponement,” she said in an email on Tuesday morning.

Indeed outreach was significant, and the lengthy process of public review began back in 2017.

Also, focus groups included 32 meetings with town boards, commissions and organizations – everyone from Tamar Lurie to the Tree Warden, and from Greenwich Hospital to the Housing Authority. The P&Z Commission publicly noticed 50 other meetings to discuss edits of the POCD draft.

After a motion to postpone failed, the overwhelming majority of RTM members voted in favor.

The next step is implementing the Plan.

“It was extremely gratifying to have that kind of support for the document,” DeLuca said. 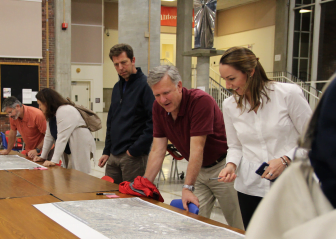 One of the guiding principles of the POCD is to preserve community character.

After input from a public planning session at Greenwich High School last year, P&Z agreed to work on a landscaping plan for Route 1 and to address signage.

DeLuca noted that the Riverside Association in particular has urged the town to create a “sense of place” on Rte 1 in Riverside.

Liz Peldunas of the Riverside Association has said that community wants the Post Road to reflect a character of place and described Riverside as both “a mutt” and the “poor step child” of Cos Cob and Old Greenwich.

For example, at hearings on a 20 unit building at 1205 East Putnam Ave proposed under the Town’s 6-110 “workforce housing” regulation, Peldunas noted Riverside has a village name and distinct zip code, yet its main drag is Putnam Ave.

P&Z has since put a moratorium on 6-110 applications.

Also, DeLuca said P&Z has had several sessions with the Greenwich Board of Realtors, and as a result the Commission is committed to studying FAR, height, and other building controls so they are simple enough to explain to newcomers and less dependent on professionals.

The POCD also calls for developing a tree preservation ordinance for private property, which has been on the radar of many local environmental groups for years.

A recent 6-110 application for 62 Mason Street, submitted before the moratorium, was case in point.

For the 7-unit building, which will replace an 1890 structure, the applicant had to hire professionals for repeated appearances before P&Z and ARC.

At the same time the application demonstrated the need for a tree preservation ordinance.

Over the objections of the Tree Conservancy, the applicant received permission from the tree Warden to cut down a mature Town-owned Maple tree that is part of the historic streetscape to make room for a wide driveway.

As part of the agreement, the tree warden stipulated a “historically important” Magnolia tree on the property be preserved. However, the applicant’s attorney John Tesei subsequently said the Magnolia was not healthy and needed to be cut down.

The commission ultimately approved the 7-unit building. It includes 2 units of workforce housing.

“This ordinance will be tricky as we must ensure the appropriate balance
between private property rights and the public good,” DeLuca said of a tree ordinance.

The Plan also seeks to develop housing opportunities that include innovative, high-quality, green, “physically accessible to all” options beyond the single family residence.

She said the Plan also addressed the balance between having top quality public and private schools and respecting neighborhoods.

DeLuca noted schools are mostly located in residential neighborhoods, and neighbors have voiced objections to increased traffic and to school expansions.

A proposed 30% FAR in 2018 drew the ire of neighbors of GHS and Greenwich Academy in particular. That proposal was ultimately withdrawn.

Other guiding principals are to preserve open space, particularly in back country, and to maintain the town’s economic vitality by upgrading zoning regs and streamlining the process of establishing a business in Greenwich.

It also refers to strengthening Downtown as the central business district, exploring a dredge of  Greenwich Harbor, creating an art installation, improving lighting in the Steamboat Rd underpass and improving parking downtown by segregating employee parking from consumer parking.

In particular, DeLuca said, “the health care industry is one we must keep a close eye on as it is gaining strength to parallel the hedge fund industry in terms of where we can add value.”

And while the POCD focuses on providing more affordable and moderate-income housing in Greenwich, the elephant in the room remained state affordable housing statute 8-30g.

While P&Z imposed a moratorium on the town’s 6-110 workforce housing reg, 8-30g continues to exempt developments from local zoning regulations.

Though the Commission has had some success with using the statute to convert illegal apartments to affordable units, hundreds of residents have turned out to object to large 8-30g proposals including a multi story building on Sound Beach Avenue (After a law suit, a scaled down version was approved as a moderate income development rather than 8-30g.) and a proposal for the site of Post Road Iron Works for a 5-story, 355-unit apartment building with two levels of underground parking that was rejected by the Wetlands Agency. (After the applicant appealed in court, Judge Berger denied the appeal.)

Recently, P&Z approved a settlement with a Milbank Ave developer who sued the town after the Commission rejected his proposed apartment building.

While residents expressed dismay with the massive building, which will replace six turn of the century houses with one 30-unit building, the developer could have resubmitted under 8-30g for a significantly bigger development.

First Selectman Fred Camillo, who was until last week a State Rep, has worked on a state level toward a moratorium on 8-30g.

Section 8-23 of the Connecticut General Statutes requires each municipality to adopt a POCD at least once every 10 years.