The commission started the evening discussing a proposed settlement of a lawsuit involving a residential apartment building proposed on Milbank Avenue.

Several years ago the commission changed the rule in R6 zone to no longer permit multi-family and allow only single family or two family homes. But before the rule change, this application submitted under the old reg.

The proposed apartment building is at the corner of Havemeyer and Milbank Ave. It involves consolidating six lots – 255, 257, 259, 261 and 263 Milbank Ave plus 71 Havemeyer Place. Parking for 70 cars would be underground. 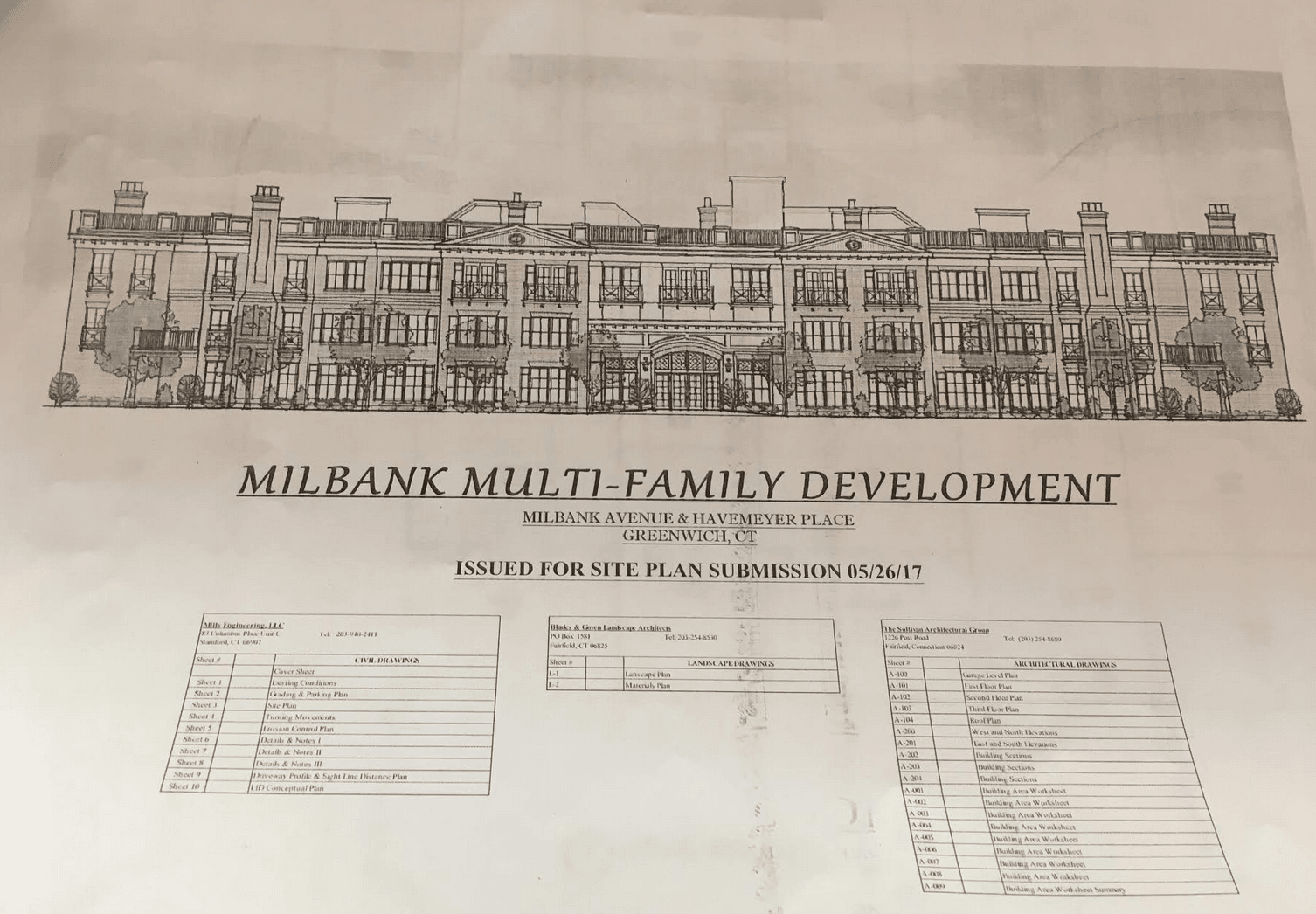 Rendering of proposed apartment building on Milbank Ave back in 2017.

In 2017 P&Z denied the proposal due to concerns about massing of one large building. As proposed then, the building faced away from Milbank and had 19 units. The applicant then appealed the denial in court.

Fast forward two years, and the “stipulation of settlement,” which the commission voted to approve on Tuesday night, is for 30 residential rental units, which is 11 more than proposed in 2017.

However, the commission said some concessions had been made by the applicant: the Floor Area Ratio (FAR) is the same, and the apartments are now configured in two separate buildings connected by a one story lobby that won’t be visible from Milbank Ave because the lobby is up a slope and there will be landscaping.

“I think we’re in a pretty good position to find what we’ve been looking for: a good balance between the built environment and the character of the town,” said commissioner Nick Macri, adding, “Remember way back we talked about the site being a transition between the town and residential neighbors behind it? We have in front of us something that kind of respects that balance and transition.”

Macri explained that the settlement reflected two years of negotiations back and forth.

“The courts encourage this time of mediation prior to a trial, and encouraged both parties to reach a settlement,” said P&Z director Katie DeLuca. “There have been considerable concessions.”

“They’ve made the building appear less bulky and overwhelming to the street,” said chair Margarita Alban.

The commission did allow public comments which will be transferred to superior court for consideration on December 12. 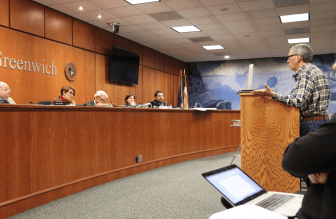 Ridge Street resident Greg McLaughlin said he was very concerned that cars from the apartment building would compete for limited on street parking in the neighborhood.

“Is this a done deal?” McLaughlin asked. “We’re concerned about a population explosion. It’s going to be more cars and more people. We built a home on Ridge Street three years ago and it’s already exploding with traffic and parked cars.”

“There’s a lot more parking,” Ms. Alban acknowledged. “The bedroom count did not change. The number of units changed. You should have the same amount of people.”

“We’re essentially doubling the population of the neighborhood,” McLaughlin said.

No one mentioned 8-30g specifically, but there were enough hints that the applicant could have submitted the project under the state’s affordable housing statute. That would exempted them from local zoning regulations and result in something even bigger and not necessarily have adequate parking.

“This is a question of a balancing act,” said Ms Alban. “We recognize there is a lot of congestion and traffic downtown, but we also recognize we need housing units for younger families and younger people.”

The vote was unanimous in favor.

255 Milbank Ave is one of the lots that will be combined to make room for a 30 unit apartment building.  Photo June 23, 2017 Photo: Leslie Yager

257 Milbank Ave is one of the lots that will be combined to make room for a 30 unit apartment building. Photo June 23, 2017 Photo: Leslie Yager

71 Havemeyer Place is one of the lots that will be combined to make room for a 30 unit apartment building Photo June 23, 2017 Photo: Leslie Yager