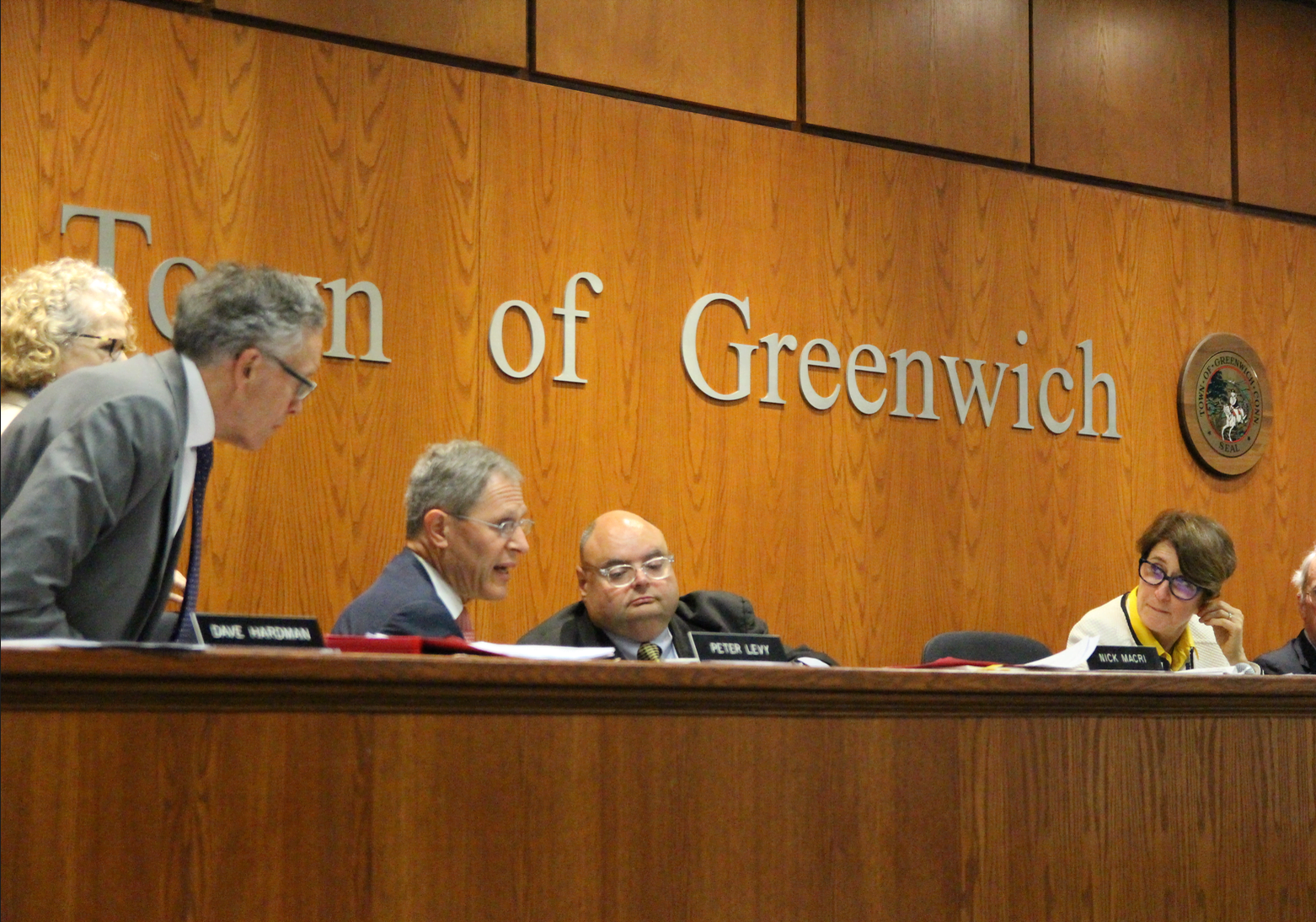 On Wednesday night, the P&Z commission again entertained an application to re-develop 62 Mason Street where a house built in 1890 will be demolished to make way for a 7-unit building that includes 2 units of workforce housing.

The application is submitted under the town’s 6-110 regulation, which is intended to incentivize moderate income “workforce” housing.

Originally the proposed architecture for the building was Italianate, but after multiple sessions with the Architectural Review Committee, the applicant was steered toward a mansard roof.

The applicant has said they strenuously objected to the mansard roof, but complied with ARC nonetheless.

At the Aug 6 P&Z meeting, the commissioners said the mansard failed to match the body of the building.

On Wednesday night the applicant returned having tweaked the architecture.

“Can we get back to consensus and stop taking it apart piece by piece?” she asked.

“I disagree. I think ARC advises us…We have two architects here. This potentially saves a trip back to ARC. These are very constructive comments,” commissioner David Hardman said.

With a nod to all the time the applicant invested trying to please the ARC, Ms. Alban said, “The commission prefers to start talking to applicants before they get too far along. That is my issue.”

She said the proposed architecture was less a concern than the leafy streetscape which will screen the house.

The applicant’s landscape architect Wesley Stout approached the podium to address the commissioners. “I understand the concern about the Magnolia,” he said.

There was several seconds of silence.

“No. The concern is for the London Plane,” Alban replied, referring to the Town owned tree in front of 62 Mason that the applicant wants to cut down.

Earlier in the day the Tree warden Steve Gospodinoff announced the tree could be cut down, at the applicant’s expense, on the condition it be replaced by five 3” DBH (diameter at breast height) shade trees.

During the public hearing on the fate of the London Plane tree in the way of the proposed 22 ft wide driveway Dr. Greg Kramer, Superintendent of Parks & Trees, asked about the plans for the Magnolia, which he said was likely was as old as the house.

“I believe there is historical importance in protecting it,” Kramer said at the tree hearing. “Can you show a landscaping plan to protect that tree?”

There was no mention about the Magnolia being poor health.

And in Gospodinoff’s decision letter, he specified that “the landowner will take all reasonable provisions to protect the Magnolia tree during construction.”

Ms. Alban, who has been very involved in drafting the new Plan of Conservation and Development (POCD) said she was surprised to hear anything about the Magnolia being in poor health and brought the conversation back to the London Plane.

“We keep hearing over and over again as we develop the long range plan, that people want to retain community character, to retain streetscapes, and retain a green look along the street,” Alban said. “What you’re doing is adding big walls and adding little bushes.”

“And the tree warden said you’re adding three inch trees. They’re teenie,” Alban continued. “What I object to is, having heard the comments from the public about our long range plan and the loss of streetscape, this is completely unnecessary. Why can’t you enter the building from the rear or side? You had people speak at the hearing and they objected to it. There you have it.”

Attorney John Tesei said, “Regarding the Magnolia. It’s not healthy and it needs to go.”

“The Magnolia tree is unhealthy? I saw in the minutes you were going to save it,” Alban said.

“I said I’d use best efforts to say I’d try to save it,” developer Albert Orlando said from his seat without approaching the podium.

“It says, ‘The land owner will take all reasonable provisions to save the Magnolia,'” Alban said quoting minutes from the tree hearing. “If, after the fact, it’s unhealthy, you’re putting us in a difficult position.”

The applicant had submitted a letter earlier on Wednesday from William Gossett of Gossett Brothers Nursery in South Salem  saying Tom Gossett and William Molyneux had looked at the Magnolia “for possible transplant” and determined it was “not viable as the caliper of the tree was too large and the center is completely hollow.”

“We recommend this tree be removed,” the letter said, adding that it was not feasible to transplant the “Sycamore” (a reference to the London Plane).

Ms. Alban said the Tree Warden needed to check the condition of the Magnolia.

Addressing attorney John Tesei, Ms. Alban said, “I ask you, why do we have to have a big driveway in the front. Why we can’t have the entrance in the back?”

Mr. Tesei said he’d spoken to town attorney John Wetmore and learned locating the driveway at the back via the municipal lot would involve a revocable license granted by the Town. “And securing an easement requires approval of the RTM,” he said. “You can talk to Mr. Wetmore.”

“We should do that,” Alban said.

Ms. Alban said the applicant still had issues to work out with DPW. “You have a DPW resubmit prior to final site plan approval dated August 27. …Address whether you can get around the London Plane and the Magnolia that became ill after the hearing.”

Ms. Alban said there was a precedent for accessing residential dwellings from Town property.

“The apartments behind Tiffany’s – they are similar, they are accessed through Town property. We have done this before,” she said. “We’re going to get the facts. Until we get satisfaction from DPW, we should not move forward. We normally do not do that unless there is a strong reason.”

During public comment, Francia Alvarez from the Greenwich Tree Conservancy said it was important to note that the application marks just the beginning of construction using 6-110 for workforce housing on historic Mason Street.

“This town owned London Plane tree is not the only one to suffer this fate and change the streetscape,” she said.

“At P&Z, safety and curb cuts come up over and over,” Alvarez continued. “I worked for 8-1/2 years across from Lincoln Ave and Mason Street. Traffic speeds up and down, and I’ve seen tractor trailers getting stuck, with police coming to their aid. Cars have to wait to dare to make a turn at rush hour. This 22-foot wide driveway and curb cut pose safety issues to vehicular and foot traffic, and to the workforce heading out to lunch at mid-day.”

The item was left open and many issues were left to be resolved. 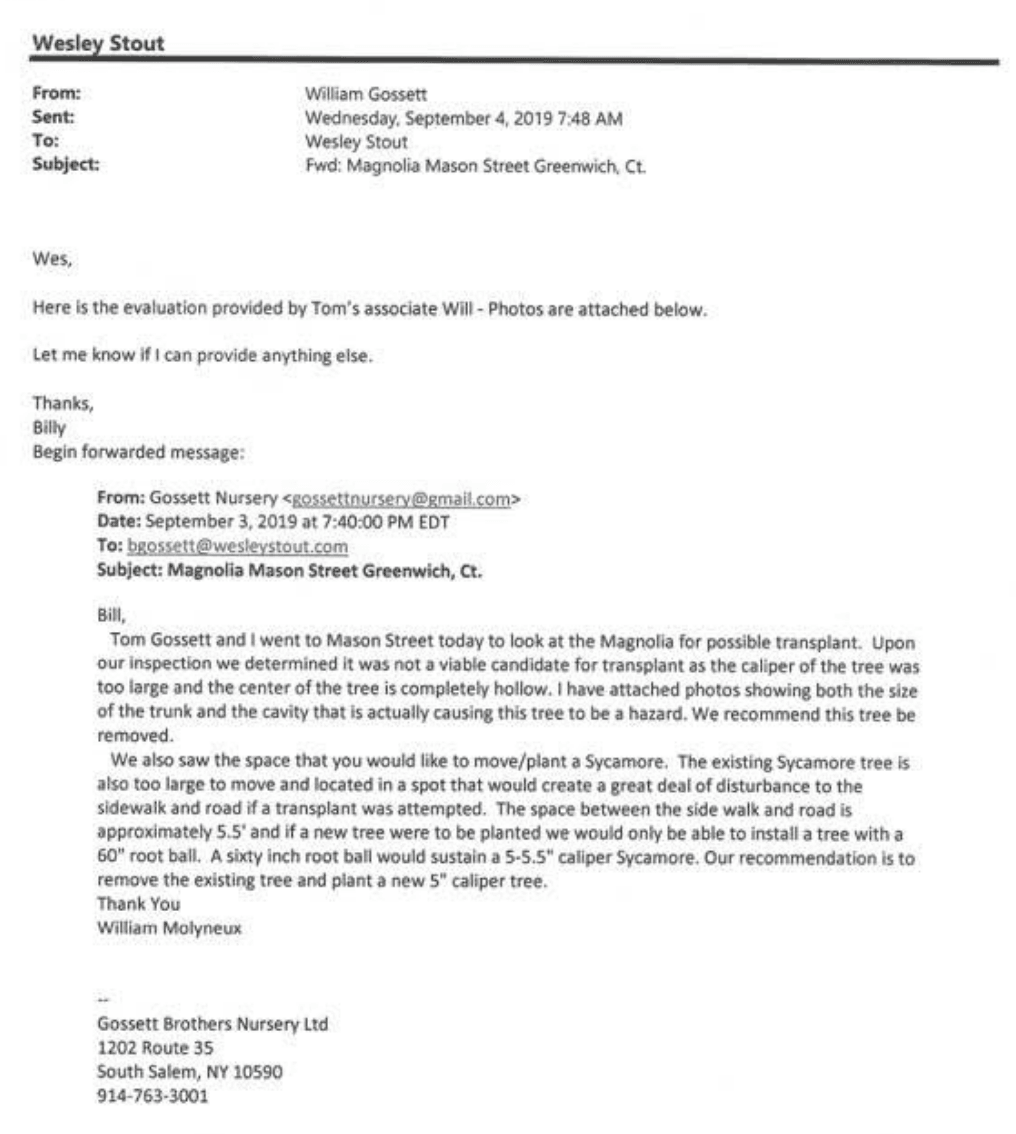