It was during Steven Sudell’s visit to Yale-New Haven Hospital’s Smilow Cancer Center in New Haven that he first encountered kindness rocks, small round rocks painted with messages of inspiration.

In June 2017, Steven, a 14-year-old from Greenwich, painted a rock with the message, “Vote for Pedro,” the memorable line repeated by Napoleon Dynamite who helps his unassuming friend Pedro run for high school student government.

Maureen Adamczyk Baldino, who coordinated that kindness rocks event at Smilow, recalled that when she crossed paths with Steven, there were more than 2,500 painted rocks in the healing garden and she gave several to him.

“Because he is a cancer warrior, Maureen came to him with a special box of rocks for him to choose from,”  said Steven’s aunt Lisa Bologna a native of Greenwich. “Afterward, he went home inspired.”

Maureen, who has lost more than one close family member to cancer and these days is bringing her brother there for appointments, said bestowing inspirational messages on a rock sounds mundane but is very meaningful for the recipients.

“A rock is the most inanimate object on the planet,” she said. “But once you paint it and release it out in the world, you make connections with people like Steven. Can you believe it?” she asked. “People like Steven keep me going.”

Maureen tried to explain further. “With a cancer family, every bit of kindness is magnified because someone does something for no credit. It’s a most beautiful feeling,” she said. “It’s a lot more powerful, the anonymity of it, than if someone just walks up to you and gives it to you. It came from the universe.”

At first Steven and his family had no idea that painted rocks with inspirational messages was something of a national movement and that here in Greenwich Elisha Perez and her 8-year-old daughter were creating kindness rocks.

Elisha explained that The Kindness Rocks Project was started by Megan Murphy on Cape Cod.

“She (Murphy) started it after losing her parents. She put kind words on a stone and left it on a beach near her home,” Elisha said. “A neighbor told her she found it and kept it, and that’s when the movement was born. I reached out to her,” Elisha continued, adding that there was nothing like this in Greenwich at the time.

With advice from Megan, Elisha started “203Tkrp,” an affiliate of the Kindness Rocks Project, in Greenwich. She and her 8-year-old daughter started by painting hundreds of rocks for a scavenger hunt.

“We’ve left rocks all over Fairfield County,” she said. “We left at least 25 rocks with Cos Cob School. Then they created their own kindness rocks garden.”

Probably not by coincidence, Maureen, who was painting all those rocks at Smilow, had also connected with Murphy.

And, here in Greenwich Steven’s family connected with Elisha.

“When we started posting pictures of the rocks we were making, that’s how we connected with Elisha,” Lisa said. 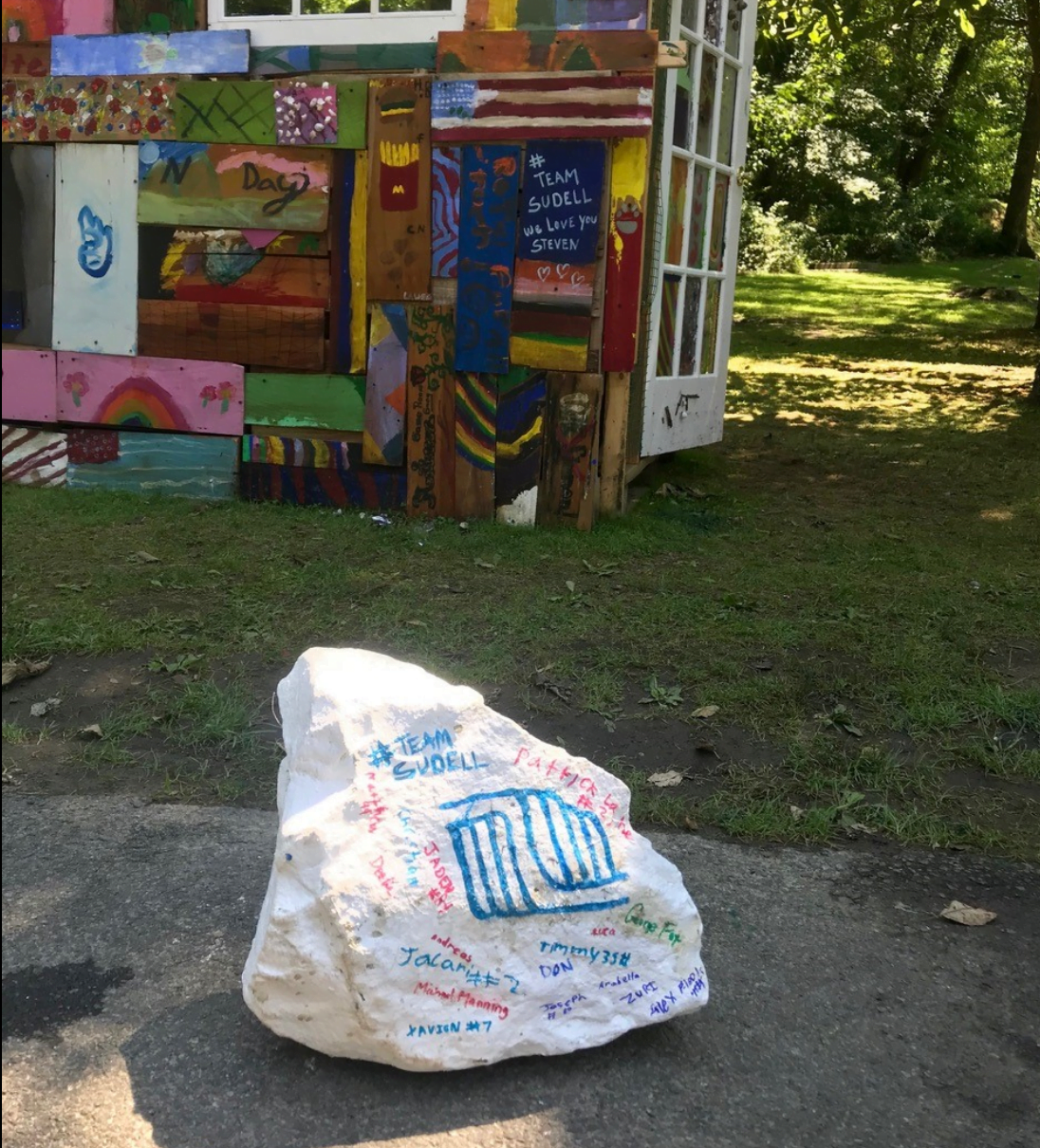 Up at Camp Simmons, the Boys & Girls Club of Greenwich did a kindness rock painting project with two sessions a day for a week. Pictures of those rocks were shared on Elisha’s 203Tkrp Facebook page.

Lisa explained that the whole idea is to give a rock and take a rock, and for the rocks to travel.

“We have people posting all over the world. We’ve heard from people who said they’d seen a #teamsudell rocks in Cape Cod,” Lisa said. “We even have rock artists posting  #teamSudell everywhere from Japan and Australia. One family painted rocks in Italy.”

Lisa said people are encouraged to post photos of rocks with the hashtag #teamsudell to Instagram and include the location.

Over the past several months, more and more people involved with kindness rocks have come into Steven’s orbit.

Patty Willard, a friend of Lisa’s, who works as a clinical coordinator in the outpatient center at Greenwich Hospital, brought the idea to her manager.

“I said, ‘This kid is amazing and always has a smile on his face,'” she said of Steven. “I asked if there was way to keep this going.”

Patty said she saw pictures that Steven’s mother Amy had posted on her Facebook, including pictures of walks through the garden at Smilow. “After that I was thinking of how to keep that going now that he’s home,” she recalled.

Patty said she got a big basket of rocks and paint, and put them out in the conference room at the hospital. From there, she said, “Our staff just went to town.”

“The creativity that came out of them was amazing,” she said. “Even people who didn’t even think they had talent. There was a little foot, bumble bees, a little pig, superman, fishing and golf.”

Patty said the rocks were arranged in the shape of a heart, and, after people were asking if they could paint more rocks, the hospital gave permission to continue the project.

“I have taken some of these rocks places myself,” Patty said. “People ask, ‘What are you doing?’ We tell them we have patients who have terminal diseases, and these rocks are inspirational for them.”

“These people are able to go there with you,” Patty said. “They’re getting around the world.” 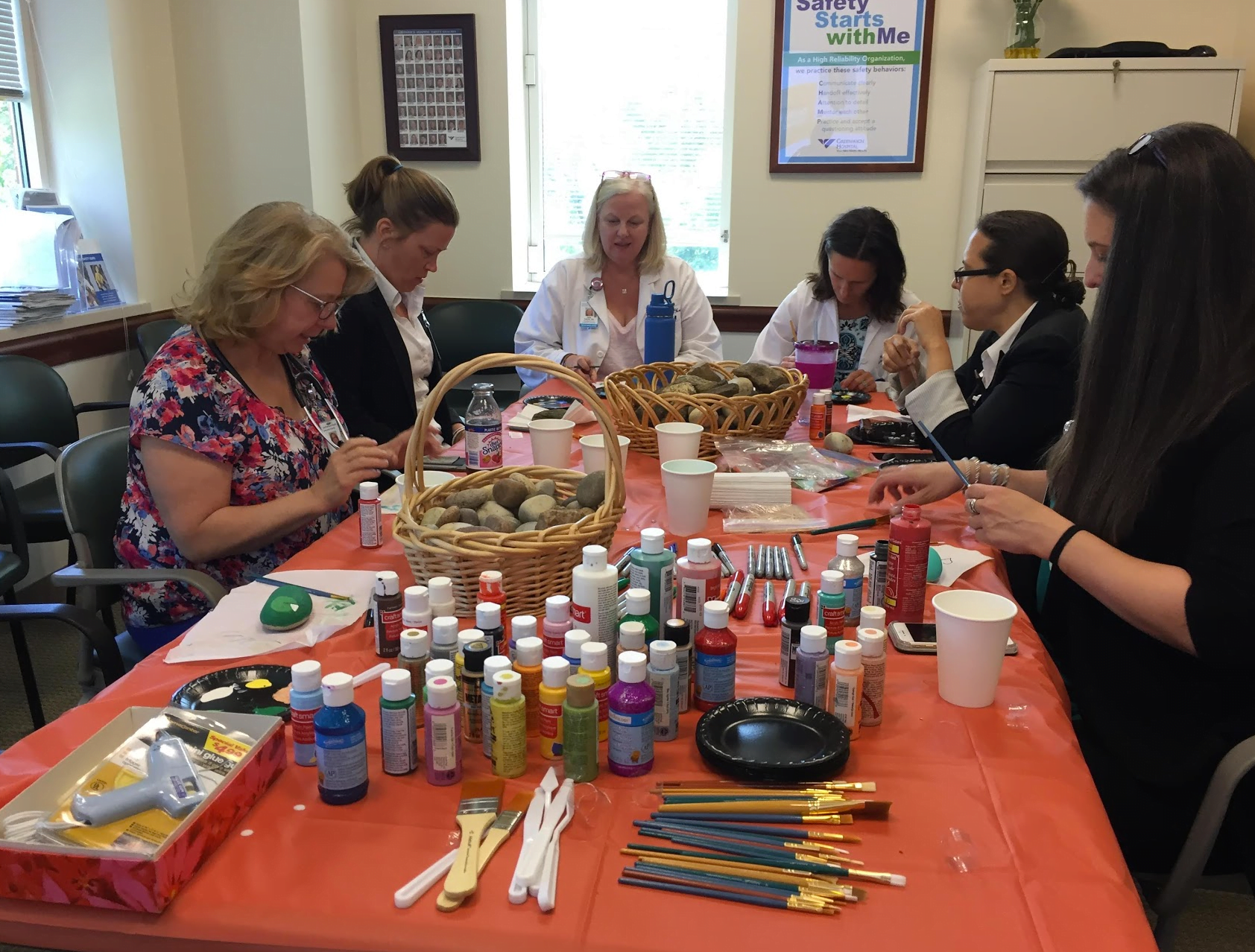 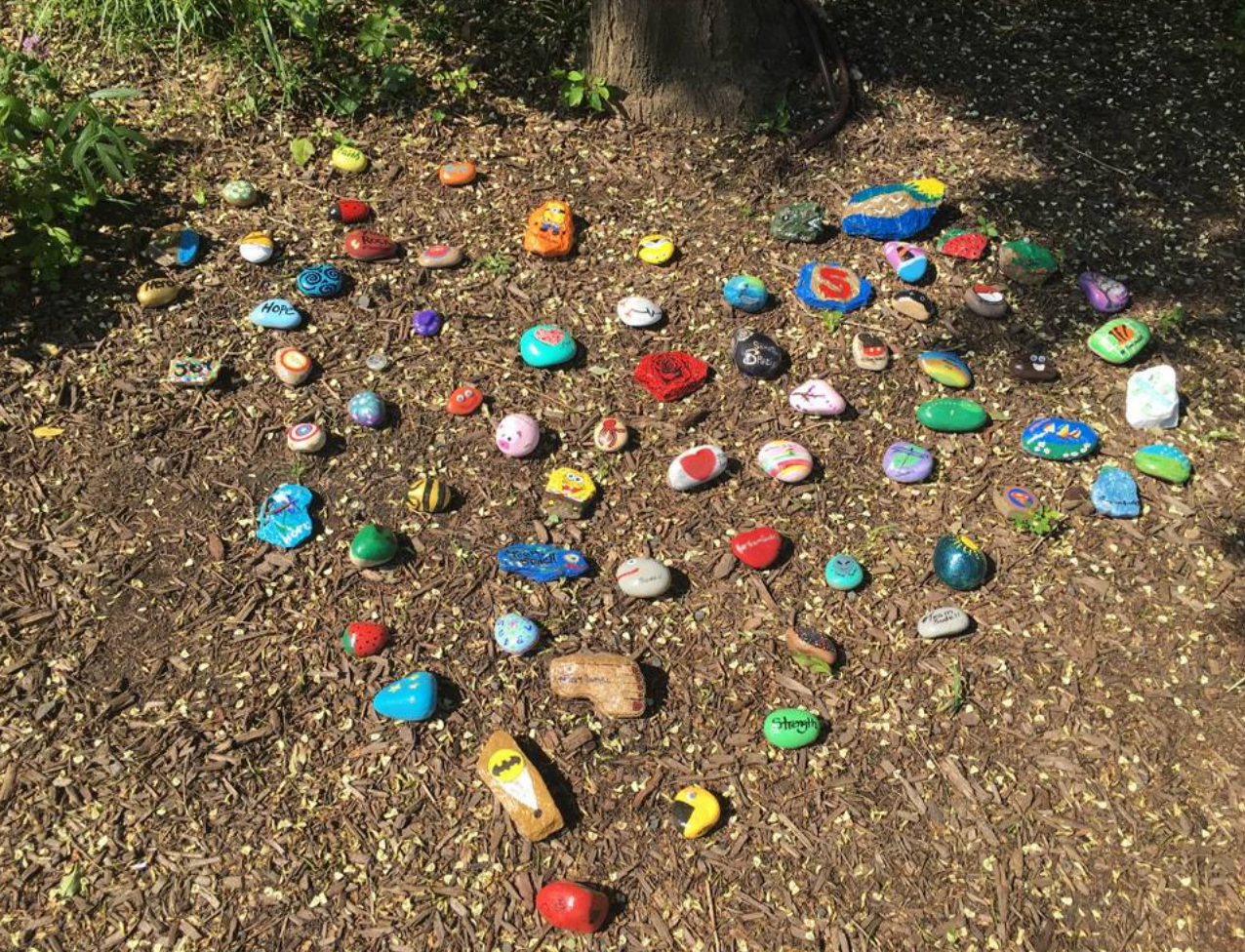 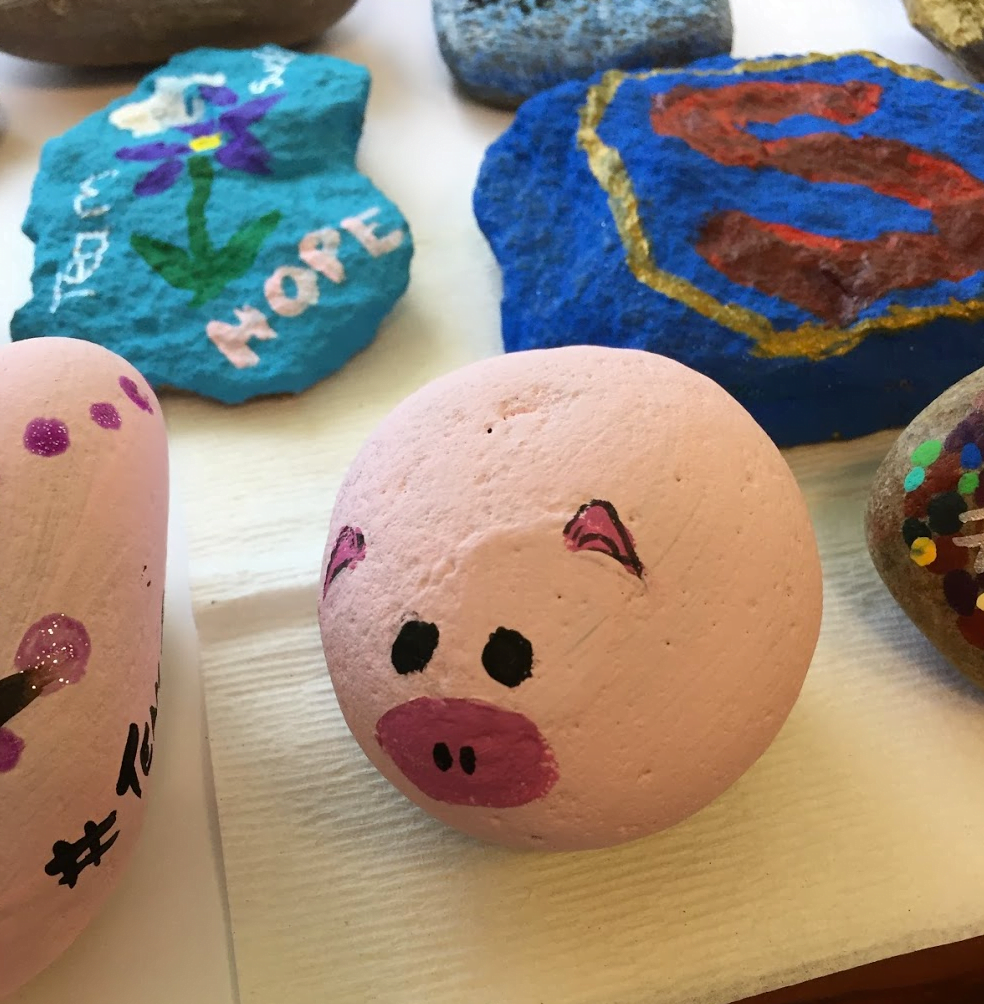 Mean while Elisha, after connecting with Steven’s family, was put in touch with State Rep Fred Camillo.

“Fred was instrumental in getting the kindness rock project moving with the Town,” Lisa said. “His efforts helped greatly in expediting the process and we really appreciate it.”

Elisha was next put in contact with Barbara Heins in the First Selectman’s office and they explored the idea of a permanent kindness rocks garden on town property.

On Wednesday, Heins said First Selectman Peter Tesei liked the idea of a kindness rocks garden. Heins, Tesei and and director of of Parks & Rec Joe Siciliano agreed on a space along the sidewalk in front of town hall.

The spot is highly visible, well traveled and handicapped accessible.

Others from the Parks & Rec Dept were involved including Alan Monelli and Bruce Spaman, and ultimately Darrin Wigglesworth, Park Operations Manager, and the Bruce Park Foreman Stacey Mortenson designed the garden.

Mortensen and her crew of Ricky Rodrigues and Branden Gospodinoff performed the work, which was completed Aug. 23.

Wigglesworth told Heins, his team was happy to make a difference.

“And that is what the project was all about – making a difference and hopefully bringing some happiness, consolation and solace to those in need,” Heins said.

There will be a ceremony at Greenwich Town hall to kick off the kindness rocks garden on Friday, September 7 at 10:30 am. 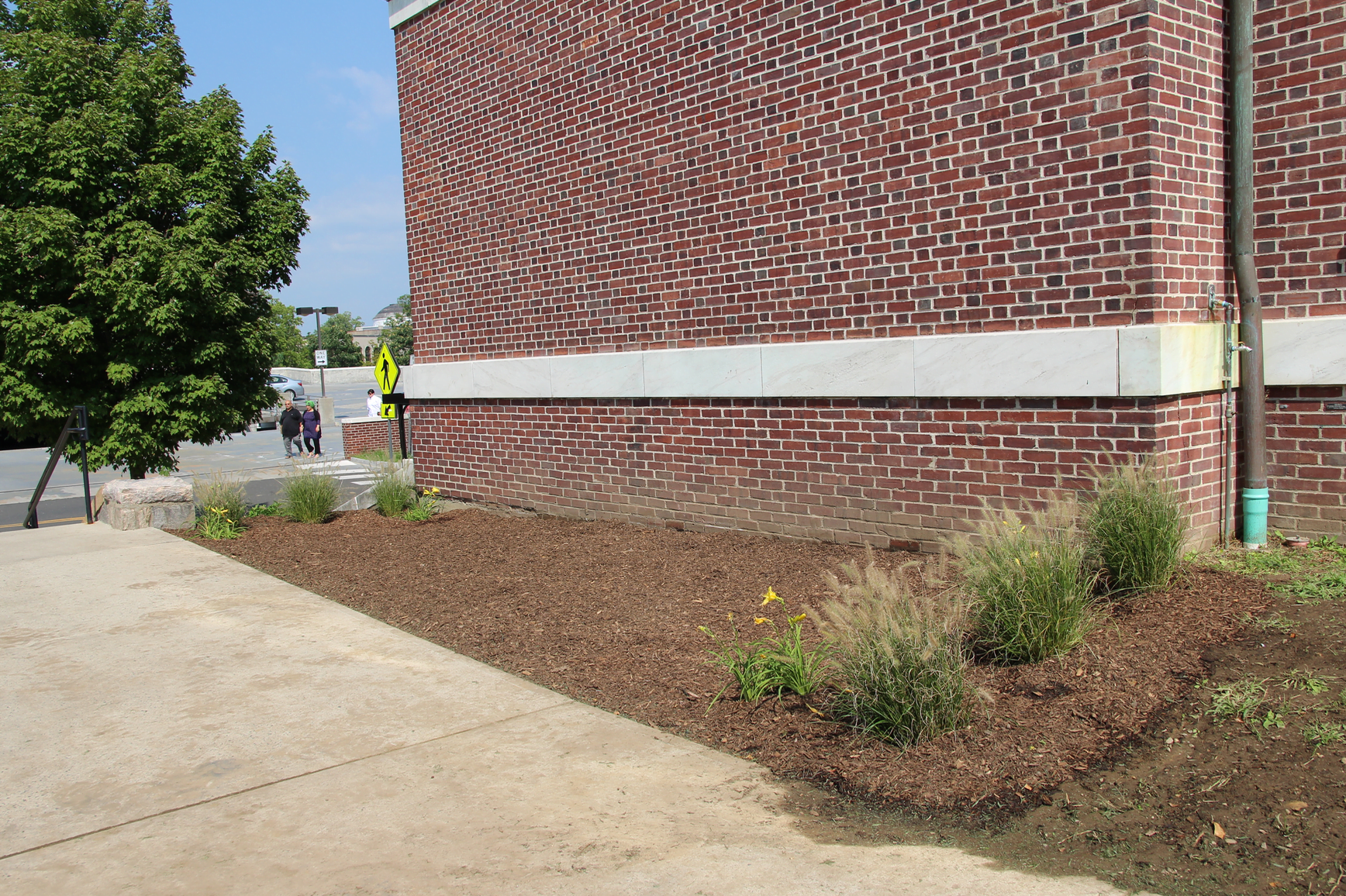 There will be a kindness rocks garden outside Greenwich Town Hall.

Since Steven painted his Vote for Pedro rock, his aunt Lisa has been putting her talents to use painting rocks.

“We understand Steven is the inspiration, but the garden is for everyone,” she said, adding that she has is currently busy painting rocks with whimsical mushrooms for the Woodland Fairies event coming up on Sept 24 at Smilow. 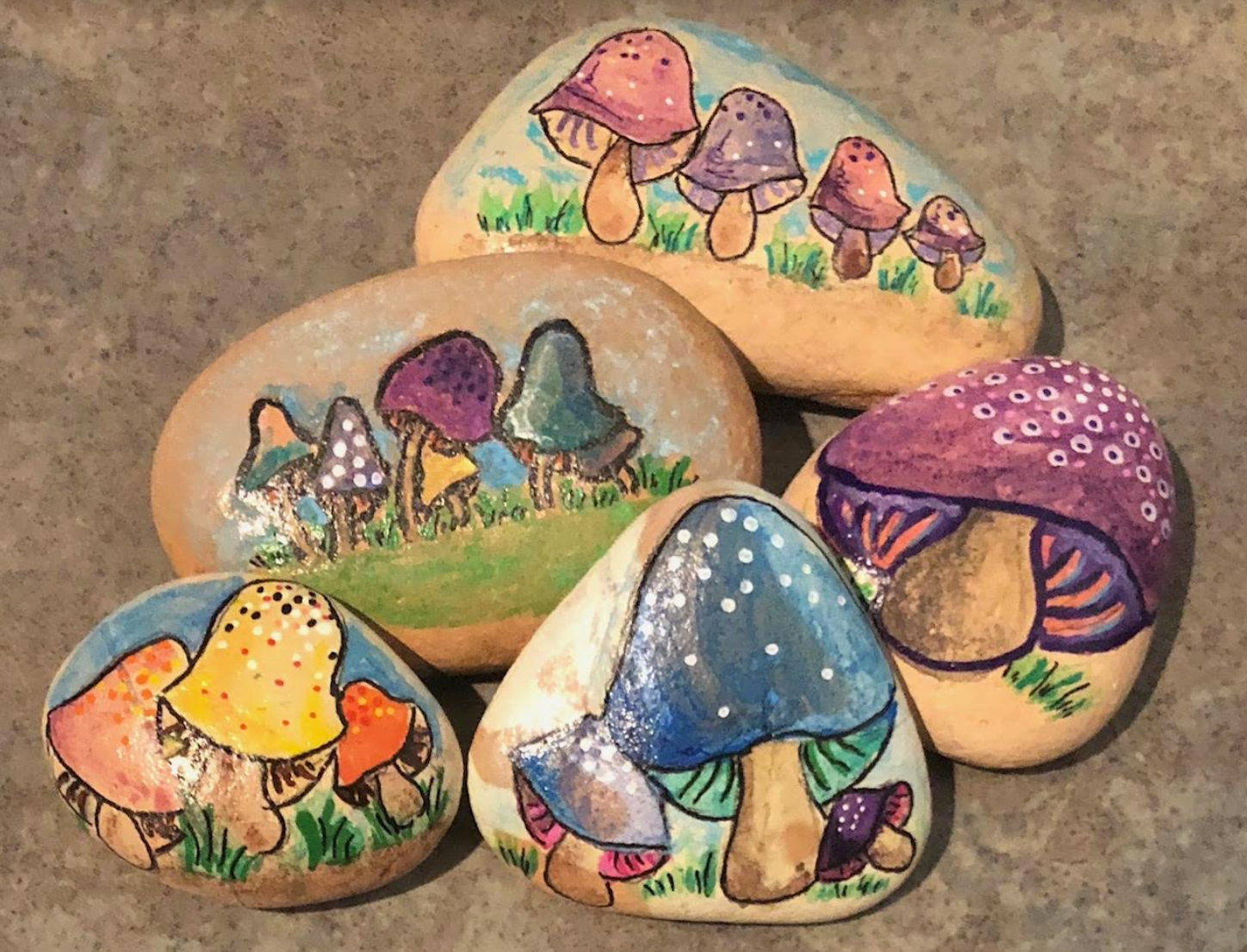 Lisa Bologna has been painting whimsical mushrooms on rocks for the upcoming Sept 24 Woodland Fairies event at Smilow Cancer Center in New Haven.

Maureen, who is organizing the Woodland Fairies event said thousands of rocks must be sourced and painted.

“It’s an endeavor where not a penny is transacted,” she said, adding that painting a rock can take 20 minutes, or maybe an hour depending on the design, and that the process has seven steps.

“You wash it, prep it, base coat it, paint it, seal it and tag it,” Maureen explained. “I’ve done about 3,000 rocks for Smilow. Some people think I’m crazy.”

“Smilow is already a scary place. I didn’t want to be there,” she said. “For me the rocks were a way of connecting.”

As for the Woodland Fairies event in September, Maureen said she is concerned there may not be enough rocks. She is hoping rock painters in the community will help.

She said anyone wishing to contact her can find her on Instagram where she goes by #smilowrocks. 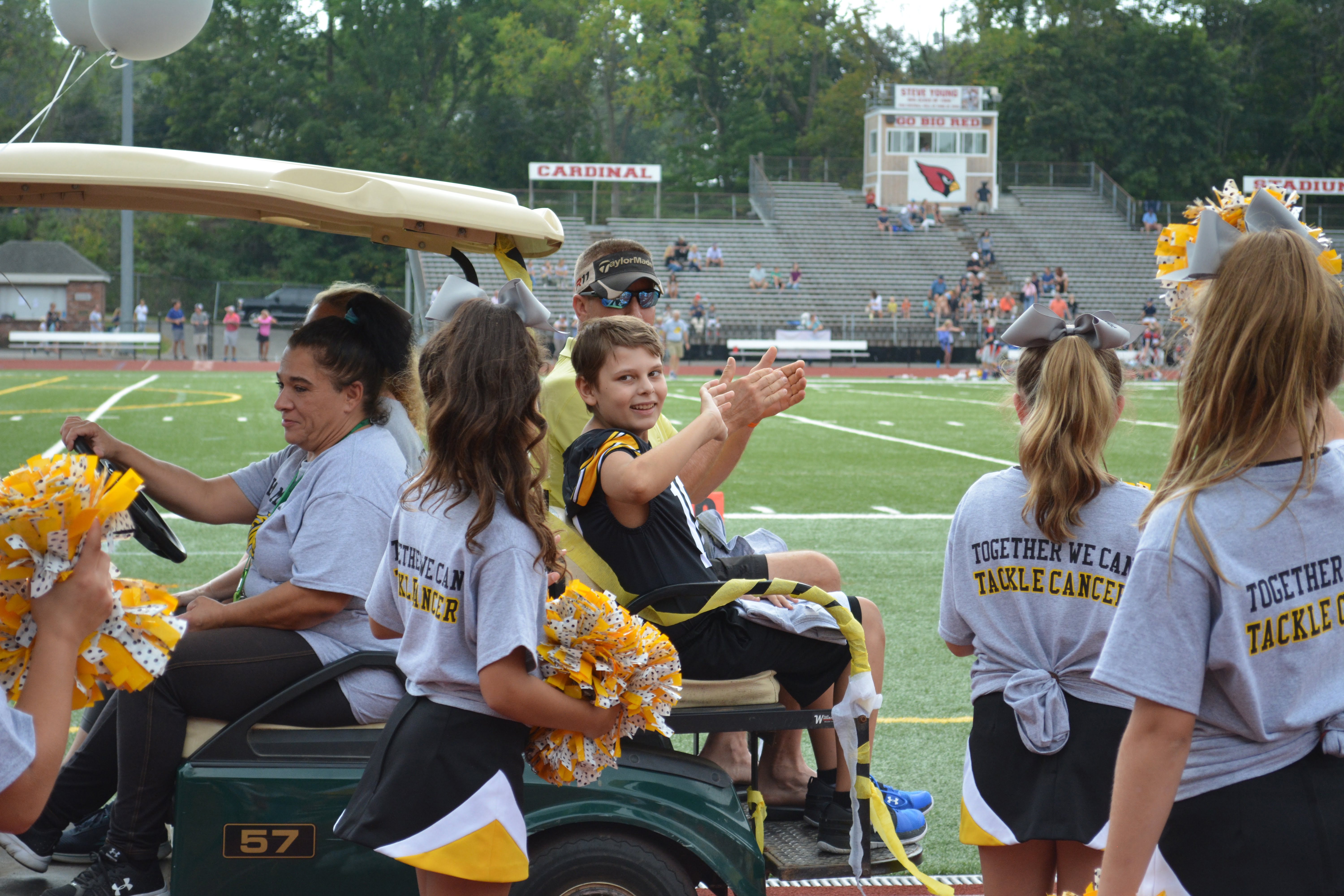