At Tuesday’s Stress, Success and Teen Setbacks event at Arch Street Teen Center, a panel that that included Dr. Paul Sethi from ONS, tackled the physical and psychological challenges of athletes coping with injuries.

Dr. Sethi described student athletes as vulnerable. “Their identity is wrapped up in sports and how we emphasize – as parents or as a society – in sports how great it is to be professional or how that will mean access to a college career,” Sethi said, adding that vulnerability comes into play when opiate medications are introduced.

“How do I tell the injured athlete to get through the pain. It hurts. Do I look you in the face and just say, ‘Put some ice on it and you’ll be okay?'” He said doctors can’t leave injured athletes in the lurch.

Sethi who was a college wrestler, said it is key for injured athletes to have someone they’re comfortable to talk to. 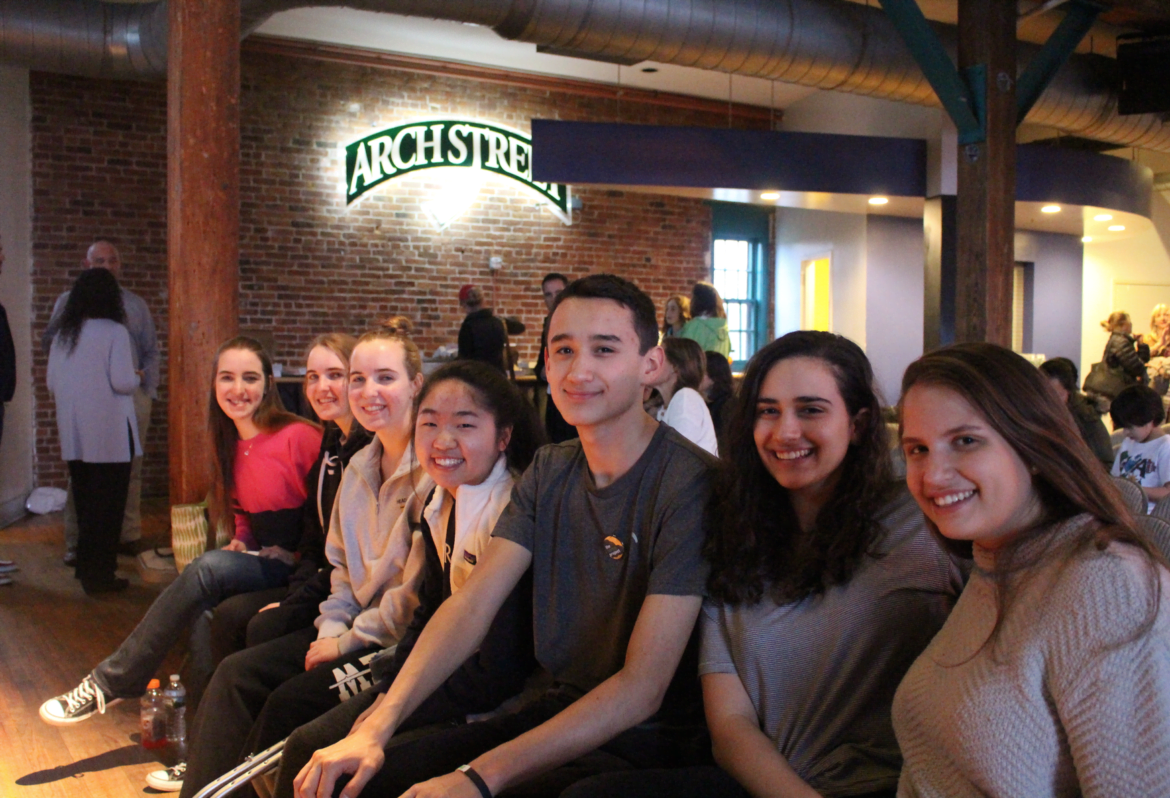 Members of the GHS Outreach Club

“This paradigm that pain is not acceptable … it is not a badge of honor any more,” Sethi said. “We know if you request refills of your pain medication, the chances of being hooked a year later substantially increase. …as soon as some of these really vulnerable athletes get a feel for these medications, it’s an a-ha, it’s an escape for them.”

Yet, he said that he doesn’t want to leave his patient in the lurch, and, for example have them in pain on a Saturday night and have to resort to the Emergency Room for relief. Sethi said this is the dilemma for doctors.

Dr. Delos said the psychic challenges of an injury are as important as the physical ones. He said the stages of grief set in, beginning with denial. He said when athletes take the mirror to themselves, they feel vulnerable. “Unfortunately, people who are vulnerable are also influencable, and even isolated from their friends.”

Diverted Medication. “The pills I give you for your surgery that you really needed  – the ones you don’t use get diverted and go to the wrong place,” Dr. Sethi said, adding that appropriately prescribed pain medications are the number one source of pain pills that circulate in high schools and colleges. 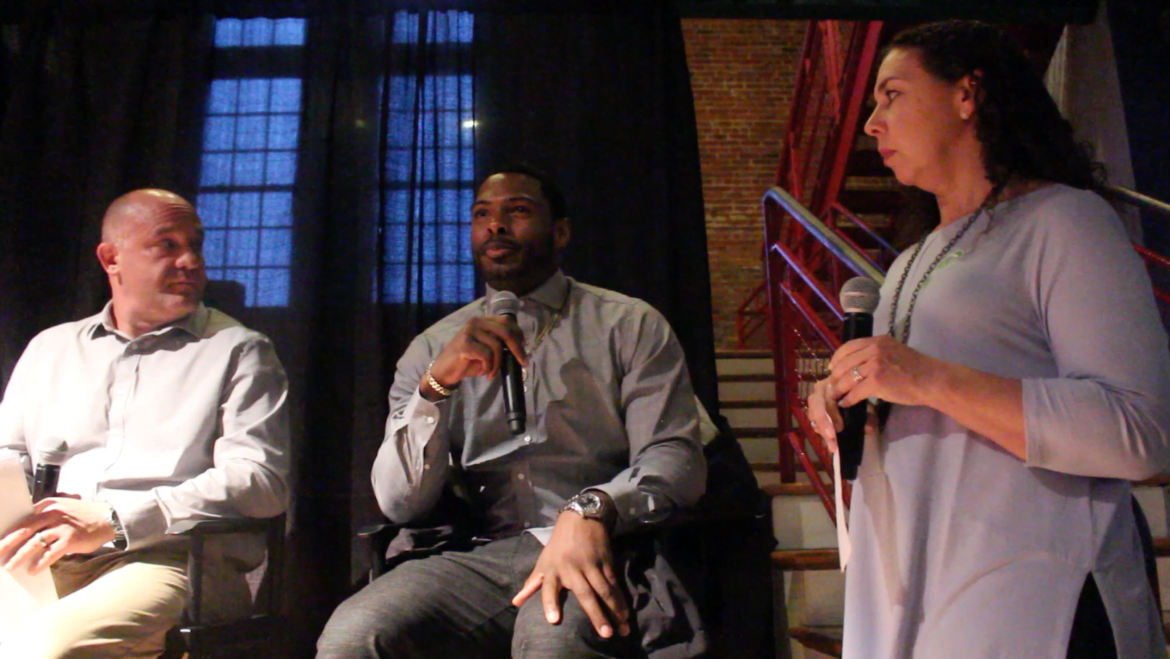 Michael Cox, former NY Giants running back, talked about his passion for sports and how he coped with being sidelined by a serious injury. April 4, 2017 Photo: Leslie Yager 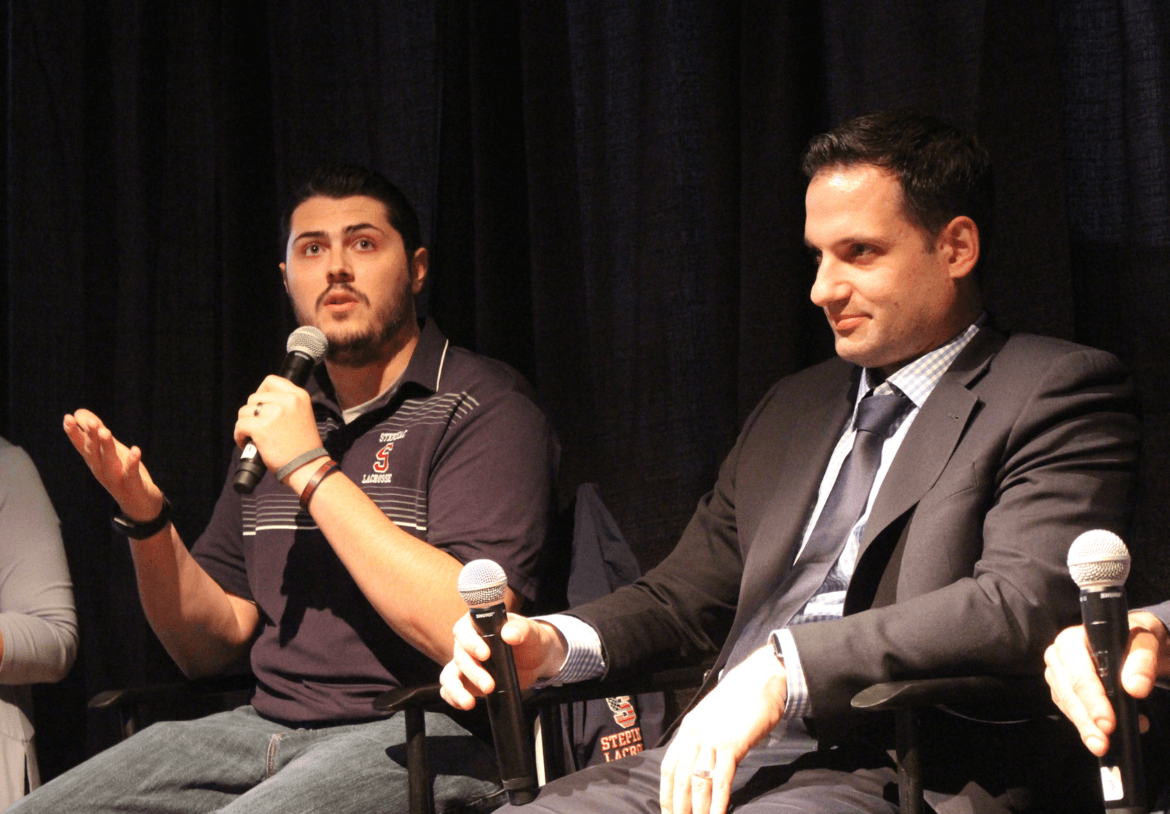 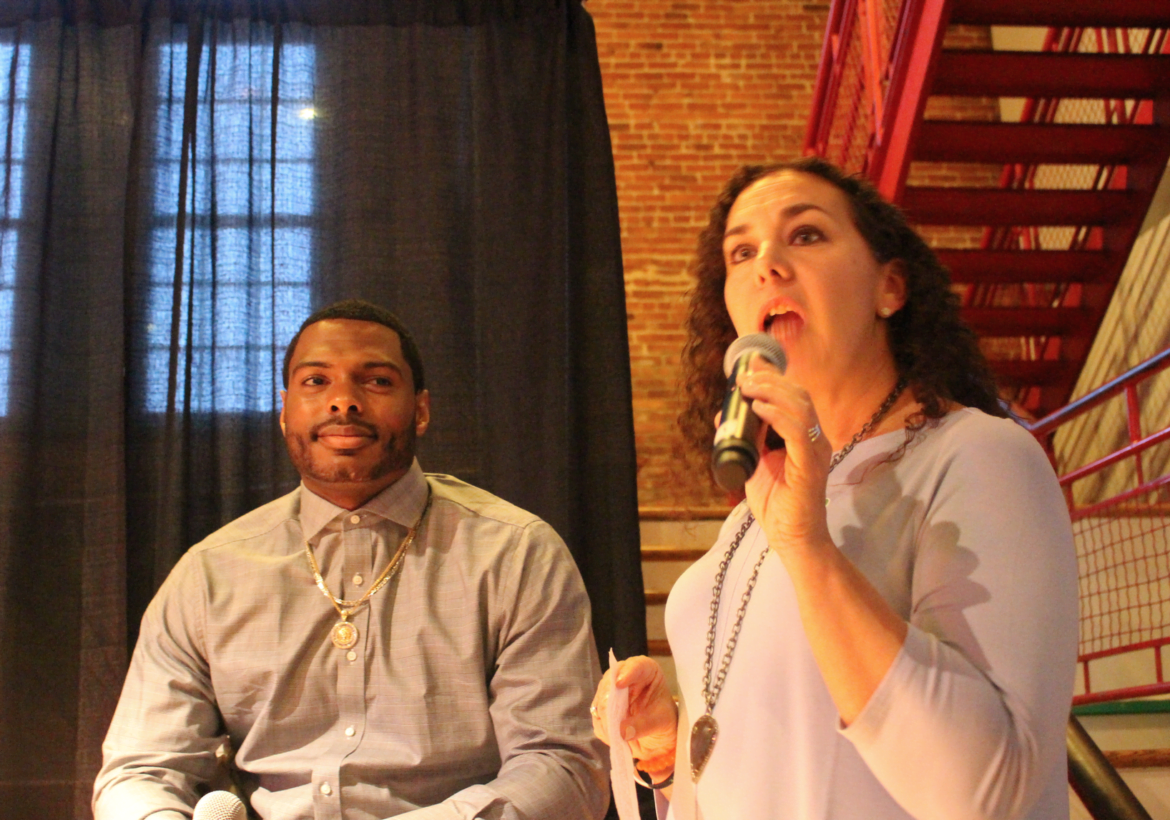 A special guest appearance was made by Michael Cox, former NY Giants running back, who talked about how, from a young age in Dorchester, MA he aspired to be a professional athlete.

“I always knew I wanted to be a pro athlete and that was my main focus at prep school at Avon Old Farms and later University of Michigan,” he said.

Cox said he shattered his leg, which now has ten metal pins in it and that he had undergone reconstructive surgery.

“I’ve had three major surgeries. I’m still recovering from it.  It was really tough. They prescribe you a lot of medication, so I can see how people get addicted,” he said. “You have to be safe and have a good support system. For me personally, I try to make the best out of the situation and work really hard on my rehab and try to do other things outside of football.”

Cox said it has been a challenge to find other pursuits to fill time that would have otherwise been spent playing football, but that is what makes him resilient. He said sports psychologists had been helpful. “I did my rehab and worked out, but there’s another 20 hours to the day – what do you do with all that time?” he asked.

Pete Falla, the head athletic trainer at Greenwich High School, said he works with non-athletes in the mornings at ONS and at GHS in the afternoons. He said his responsibility is to keep the athlete in a positive state.

“The way they react to injury has a lot to do with their personality,”Falla said. “Is the student athlete someone with anxiety issues? Do they have an underlying issue with depression? Do they have struggles at home with family? Are they Type A?”

He said some of athletes’ personality traits come to bear when it comes to dealing with pain, and suggested parents take an inventory of their children’s stress because it helps predict how they will deal with an injury.

“It’s okay for parents to say, with so much else going on, we have to draw the line somewhere,” he said, adding that sometimes parents should advise their kids to cut down the number of sports played.

He said athletes come from a structured routine of practices and games, that they should see their rehab as a process with structure with short and long term goals.

“That’s the athletic trainer’s job to keep them positive and making positive steps,” he said, adding that it’s his biggest job is to be supportive.

Falla said coaches also play a key role. He said some coaches create a negative environment where athletes have to be tough and believe winning is most important. He said good coaches tend to be involved in teaching and do things that are proactive for the injured athlete to keep them feeling part of the team. For example, they can schedule some of their PT and strengthening along with their teammates.

Michael Ahearn, a recovery specialist and coach, said he’d been an athlete in high school and then headed to St. Joseph’s in Philadelphia to play Division 1 sports, but his “partying” escalated along the way.

He said he had underlying anxiety and, at the impressionable age of 13, started drinking and smoking marijuana.

“I remember the satisfaction I got when the other kids who wouldn’t do that stuff – I was a badass. I was an ego-maniac with low self esteem,” he said.

In college he said his partying was no longer fun.

“I thought I could do no wrong, and mentally, as an athlete meant I couldn’t show weakness. Anxiety as weakness,” Ahearn said. “I was drinking to forget tragedy I didn’t deal with.”

His sophomore year two friends from high school died. He also suffered serious head injures that kept him away from lacrosse.

“My first game back from the head injury I broke a bone in my foot,” he said. From there, he said he didn’t want to deal with his problems.

“I went to the hospital and was prescribed pain killers. Because of my emotional detachment from my life, when I found painkillers, I knew I would become addicted…but I was already mentally checked out, so I took them.”

Eventually Ahearn lost his scholarship and dropped out of college.

Ahearn said at his lowest point, he was worried he’d lose his life and, in 2013, he confessed to his father that he had a problem and asked for help. “I had enough of that life style – it was dark and depressing.”

Ahearn has now been sober for 3-1/2 years and enjoys sharing his story and participating on panels to make a difference.

The entire event is available to watch on video via facebook. https://www.facebook.com/outreachkeepitsafe/?hc_ref=NEWSFEED

Scooter Braun Addresses Teens on Being from Greenwich, Being a Bystander, Being a Parent