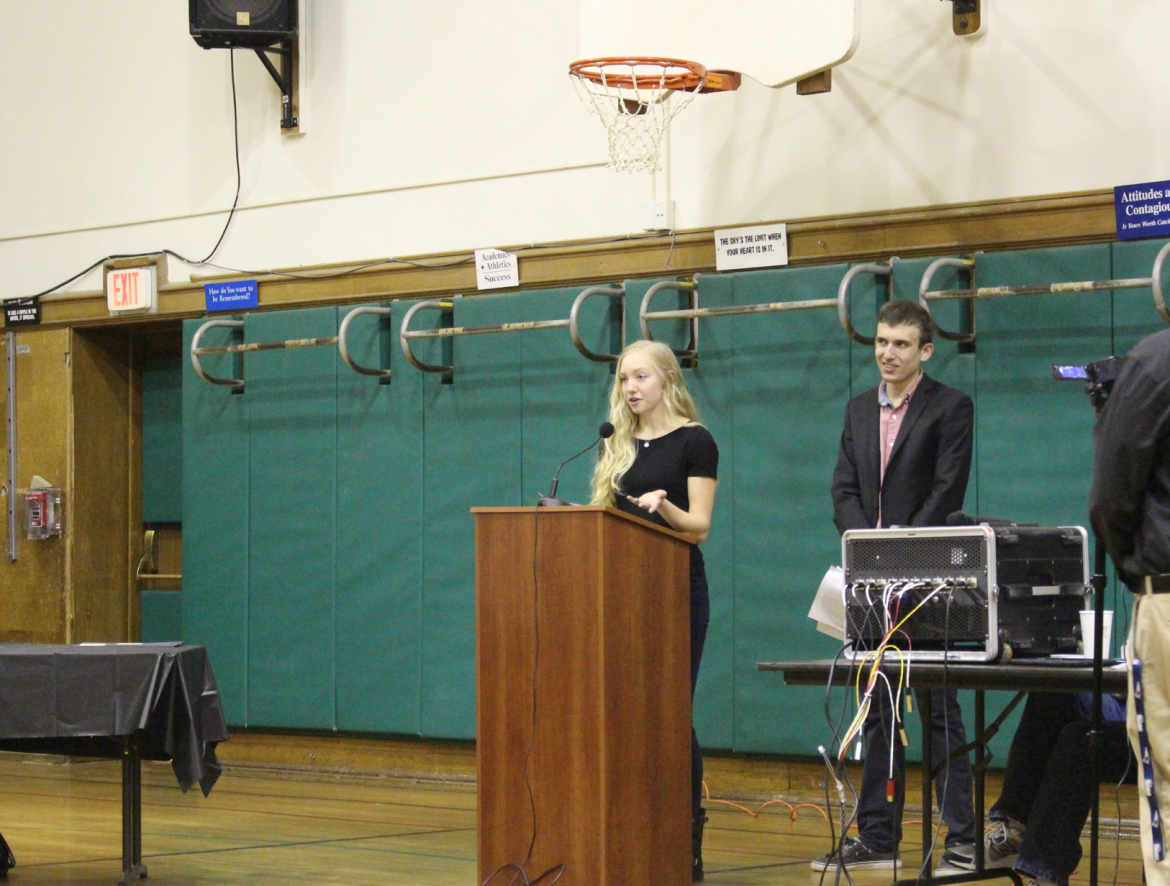 Blake Reinken, the president of GHS student government spoke at length about the school’s motto of ‘Freedom with Responsibility’ at Thursday night’s Board of Education meeting at Julian Curtiss School. Reinken’s surprise came at the end of his remarks.

After arguing that Chicken Joe’s or Garden Catering menu items added to the Cardinal Café menu would dovetail with the motto, he described a deal struck with school administration that acknowledged students must take more “responsibility.”

“Mistakes prepare us for the rest of our lives,” Reinken said of the push for more freedom, in this case the choice Chicken Joe’s in the GHS Cardinal Café. That said, Reinken acknowledged that students have been remiss in cleaning their lunch tables. For decades.

In a move toward ending the disgusting mess in the student center left for custodians, Reinken announced that a bargain had been struck.

“Custodians have been instructed not to clean up,” Reinken said. “It is our responsibility to clean up.” According to Reinken, the administration has offered that if students put an end to litter in the student center, they would be rewarded with the return of Cardinal Games. 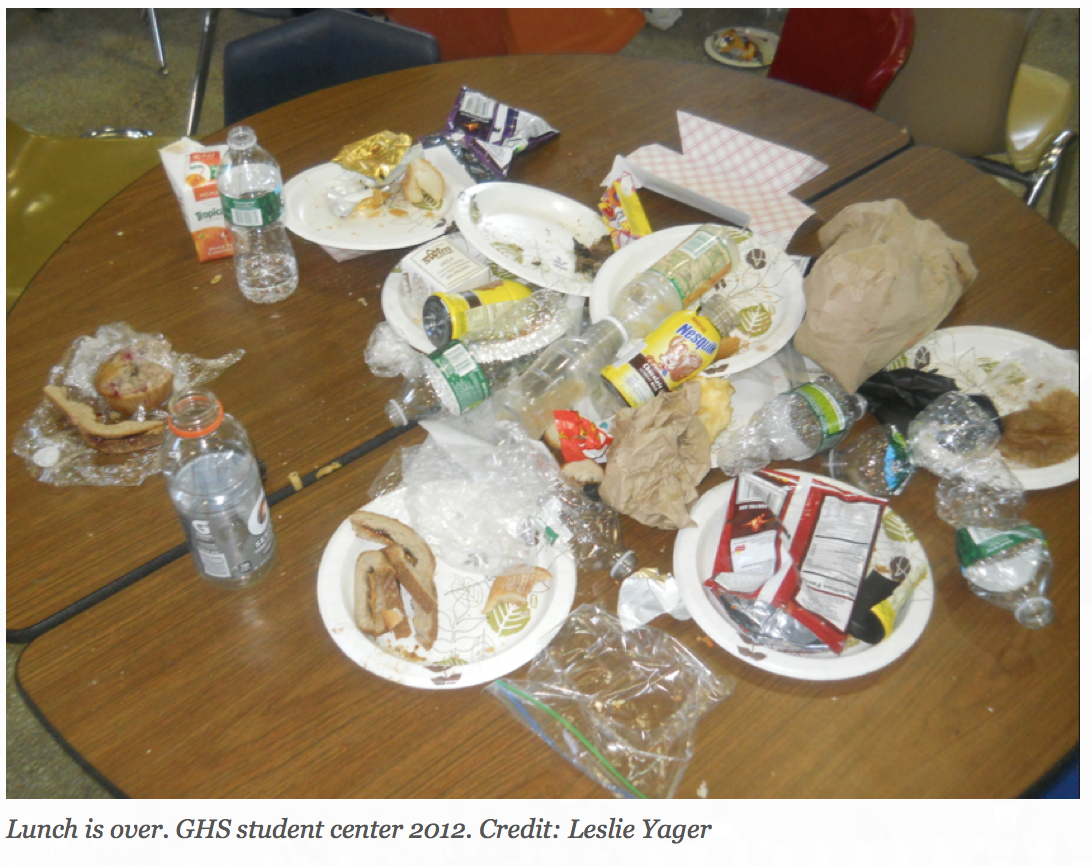 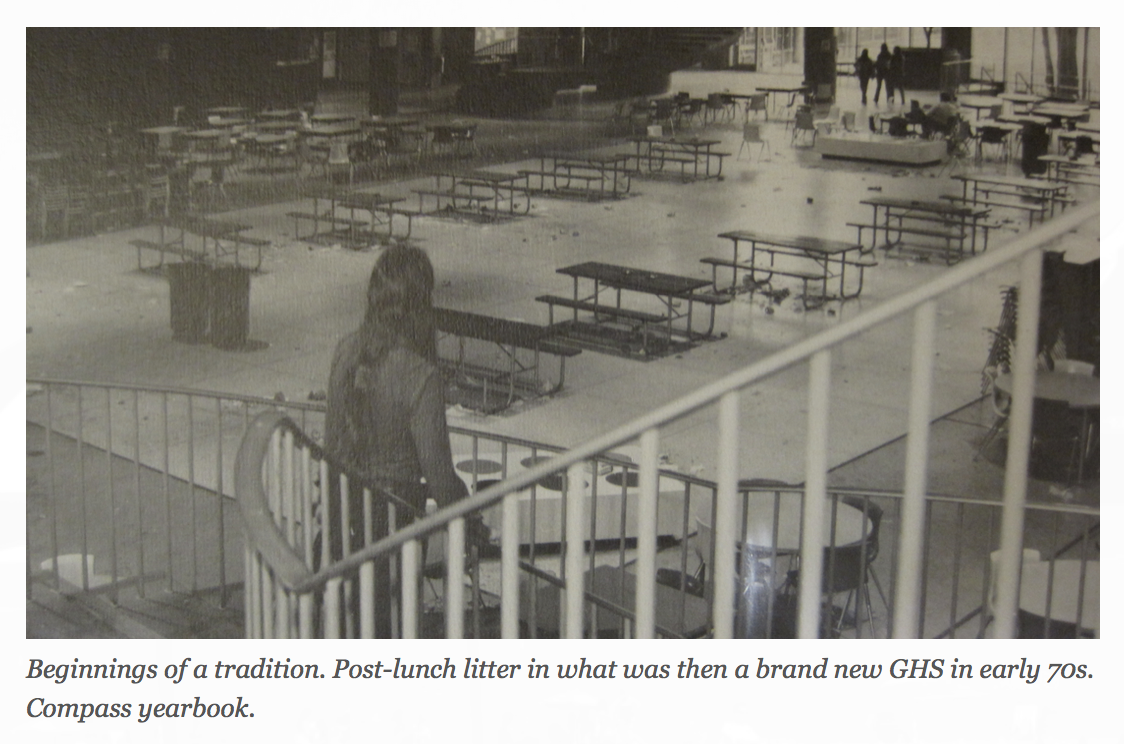 While Reinken insisted the buck would stop with the students, the bulk of his remarks focused on nuggets and wraps in the cafeteria. Reinken pointed out that GHS opts out of the Federal Lunch Program. He said GHS lets students walk outdoors on campus on sunny days. So why not add Chicken Joe’s to the selection. After all, Dominos is already a menu staple.

“Time and time again GHS students succeed in positions of responsibility. Our students have invent sub-capacitors and purification devices that change the world…Some even take 7 AP classes without batting an eye. But even when a student chooses to take an AP class and drops out due to mediocre performance, Greenwich High is still succeeding…I hope and truly believe that this board recognizes that mistakes prepare us for the rest of our lives,” Reinken said.

Reinken described his vivid freshman memory of watching nervously as Dr. Winters spoke about about Freedom with Responsibility, and how it is an essential part of what it means to be a Cardinal.

“I do support the proposal,” stated senior class president Julia Bunte-Mein of the Chicken Joe’s pitch.

“More options are always a good thing and I firmly believe in the school’s motto, ‘Freedom with Responsibility,’ and this applies to choosing one’s food every day. At the same time, to have this responsibility to make healthy choices, there needs to be healthy options available,” she said, though she conceded that improvements have been made.

“These changes have been noticed and are greatly appreciated.” She said iceberg lettuce has been replaced with mixed greens, the salad is tossed instead of thrown on a plate and fixed pricing has replaced the weight pricing.

Still Miss Bunte-Mein said she thinks the snack choices need improvement. She said  that if a student wants a healthy snack, that granola bars would seem to be the obvious choice. She said popular snack items are the chocolate chip muffins, buttered bagels, chips, and granola bars.

Bunte-Mein said the three granola bars on offer — Chewy Bar, NutriGrain and Nature Valley — all have high fructose corn syrup, artificial color and lots of added sugar, adding that she’d like to see healthier granola bars, such as Kind bars added to the selection.

Reinken referred to the petition he started with freshman class president George Brulaj, asking Food Service to consider a proposal from Chicken Joe’s. He said the petition quickly exceeded 500 signatures. He said that Garden Catering would also like to submit a bid for the chance to have their menu items on the menu at Cardinal Café.

He said the deal would offer significant revenue to Food Services. “I also believe we should be supporting small business in our community,” Reinken said.

“Non-seniors who obey the rules and stay on campus responsibly have earned the freedom of choices in their lunches,” argued Reinken who pointed out that Food Services already has a deal with Dominos but the pizza giant only has a 14% approval rating, based on a student government survey of 881 students.

Reinken, who acknowledged that the decision was not before the BOE, concluded his remarks by suggesting that Food Services can make a decision that is both worthwhile and profitable.

In other GHS student government news, Julia Bunte-Mein, senior class president, said that for teacher appreciation week, she is working with the VP of Community Service Pasqual Caroll on creating a video and painting a banner.

Bunte-Mein announced that the recent blood drive resulted in the collection of 56 productive blood units, which exceeded the previous drive. And, last but not least, she said that in partnership with Neighbor to Neighbor the GHS Former Attire Club is preparing a prom dress giveaway for girls from all over Fairfield County.