For the second year, the Greenwich Council Against Gun Violence hosted a rally for Team 26, a group of cyclists riding 400 miles to Washington DC from Newtown to advocate for gun safety legislation. The 26 cyclists take their number to honor the 20 first graders and six teachers killed at Sandy Hook Elementary School in December 2012.

Saturday’s rally drew a crowd of about 200 despite cold and snow. The rally reflected a GCAV’s collaboration of two other grassroots — the Stamford-based The ENOUGH Campaign and the Brady Campaign Southwestern CT Chapter. 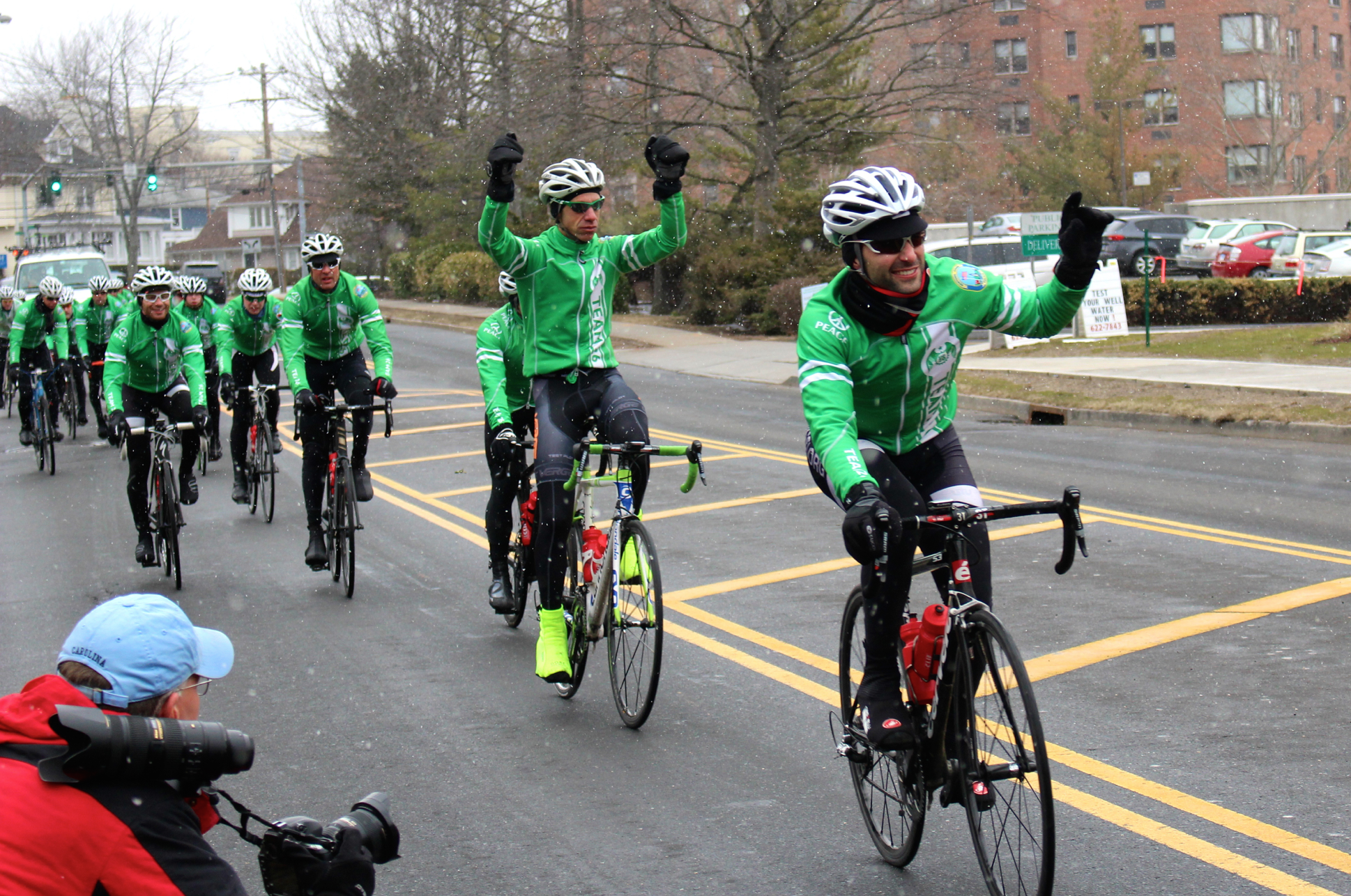 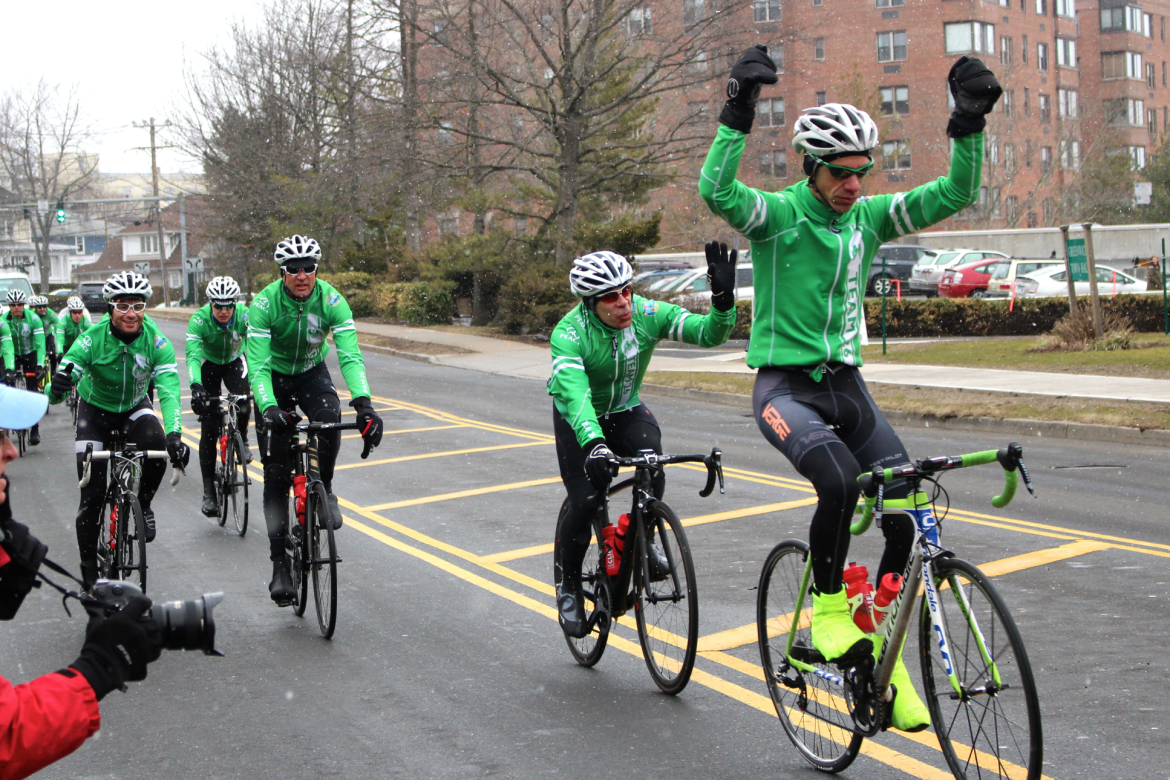 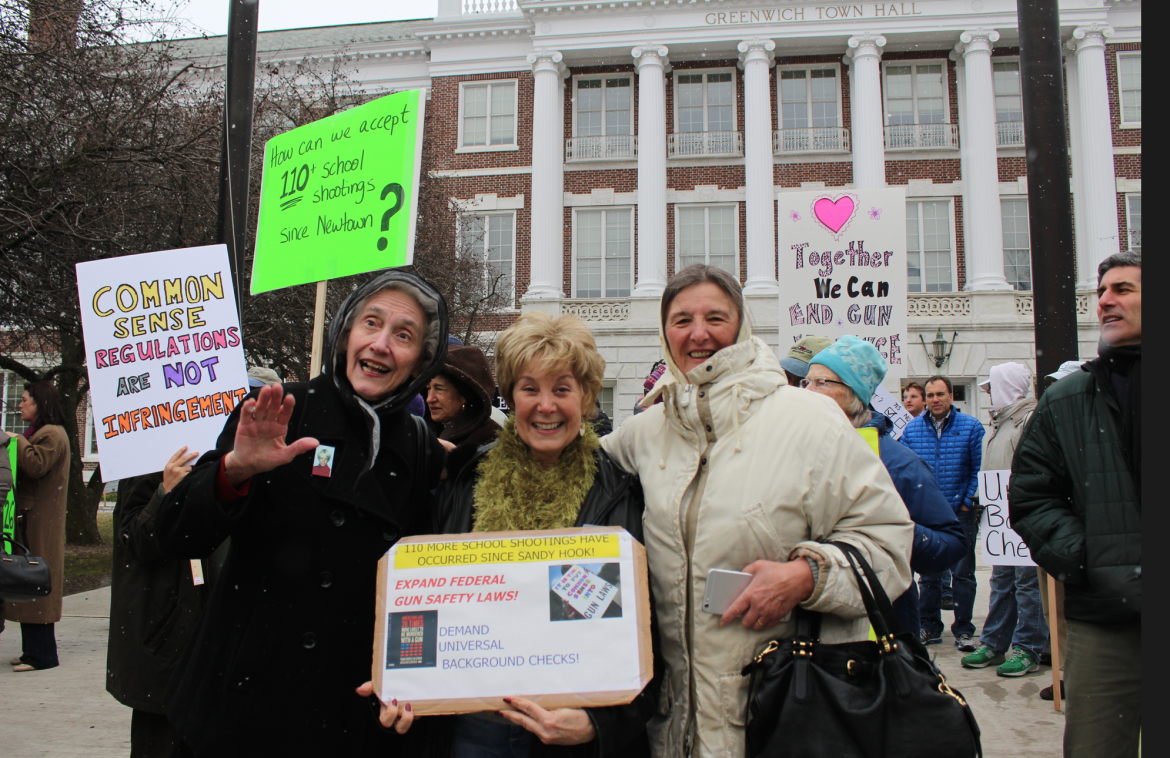 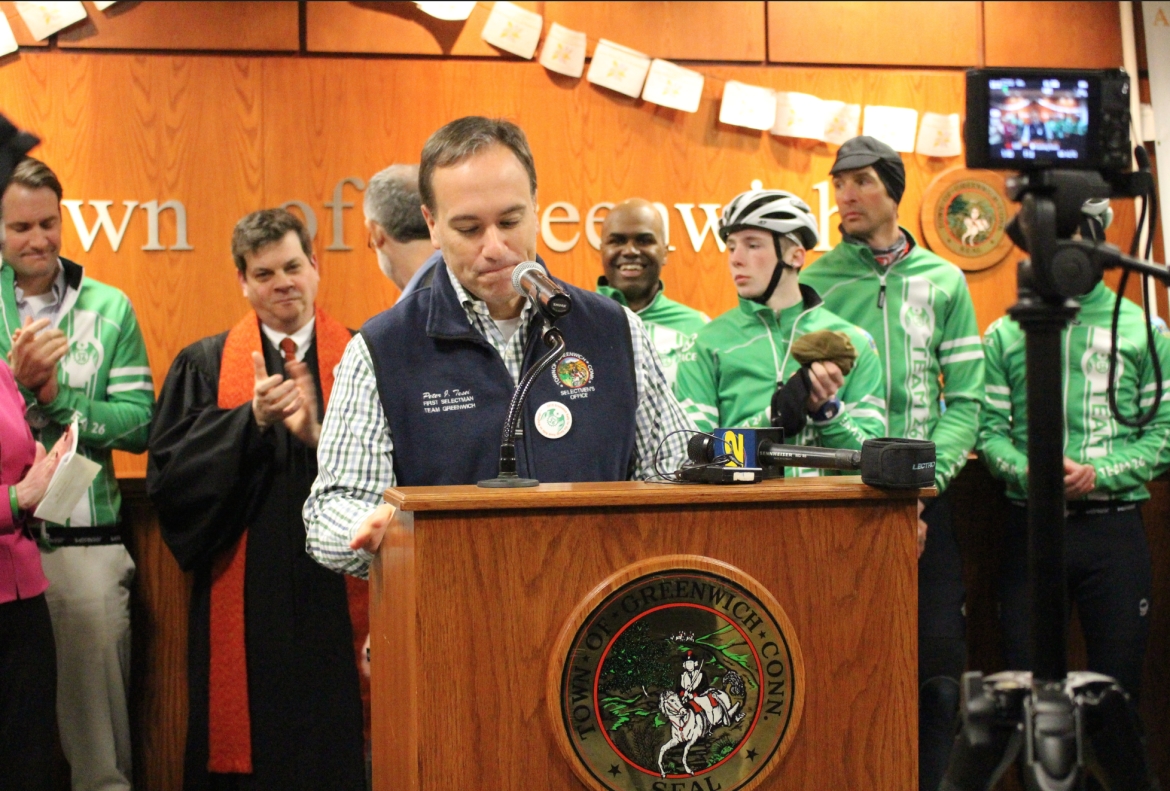 Greenwich’s First Selectman Peter Tesei, a Republican, was introduced by Jonathan Perloe. “Welcome to Team 26. We’re delighted to have you here in Greenwich,” Mr. Tesei said. “I want to extend my good wishes to you as you travel 400 miles in pursuit of your goal of responsible gun laws and wish you good health and safety and thank you for being here in the Town of Greenwich amongst your friends.”  Credit: Leslie Yager 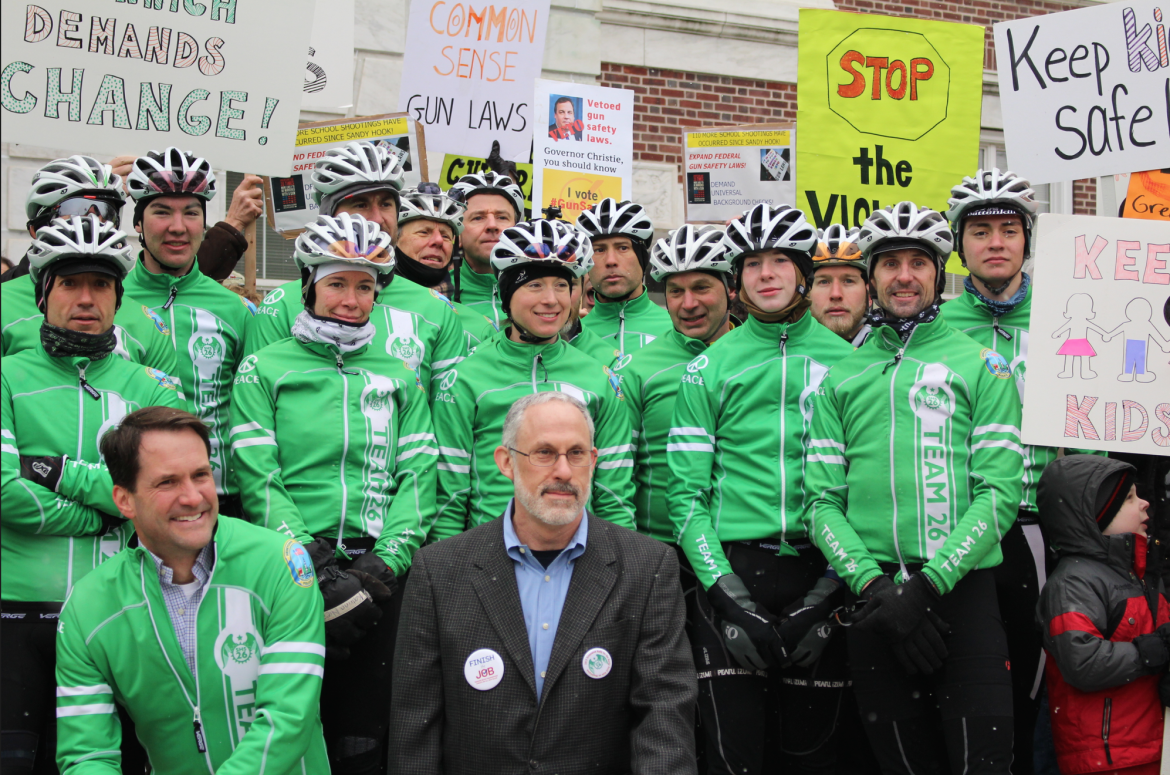 Congressman Jim Himes (D-Conn) and Jonathan Perloe along with Team 26 at the rally in front of Greenwich Town Hall on Saturday, March 28. Credit: Leslie Yager 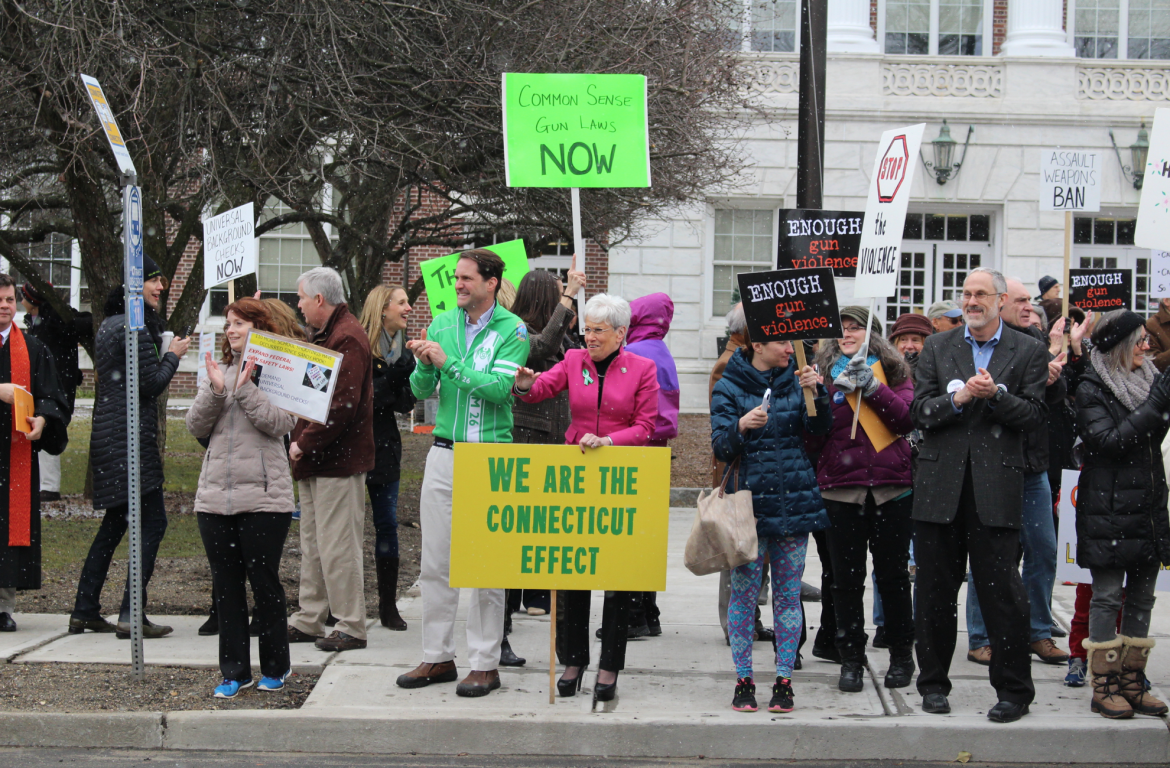 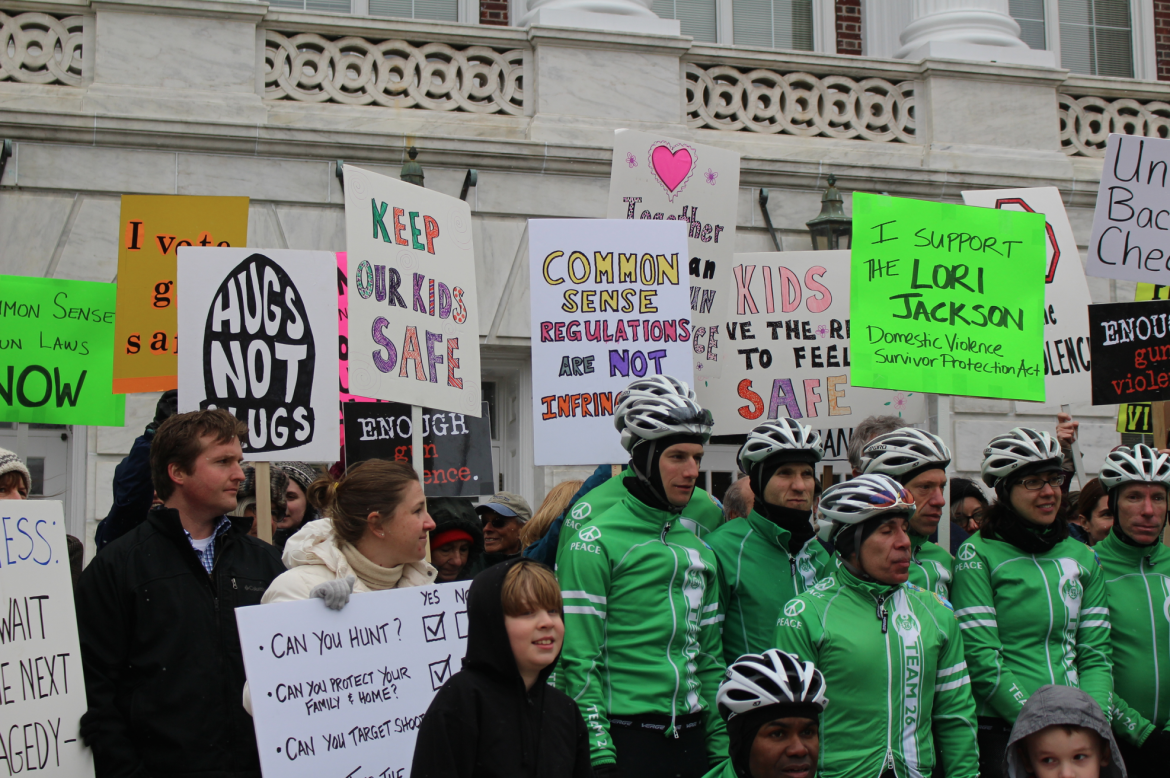 “We’re here today to close the loophole that lets domestic abusers keep their guns,” Perloe said, referring to The Lori Jackson Domestic Violence Survivor Protection Act, proposed after the murder of Oxford resident Lori Jackson, who was shot to death in Connecticut last year by her abusive husband while under the protection of a temporary restraining order.

“We’re here today to show our support for our friend, Lt. Governor Nancy Wyman, who endured three hours of questioning from pro gun rights law makers,” Perloe said. “I was there too and it shocked me that they were more worried about men losing their guns due to false accusations by women than they are about the thousands of women each year who truly fear for their lives at the hands of their abusive partners.” 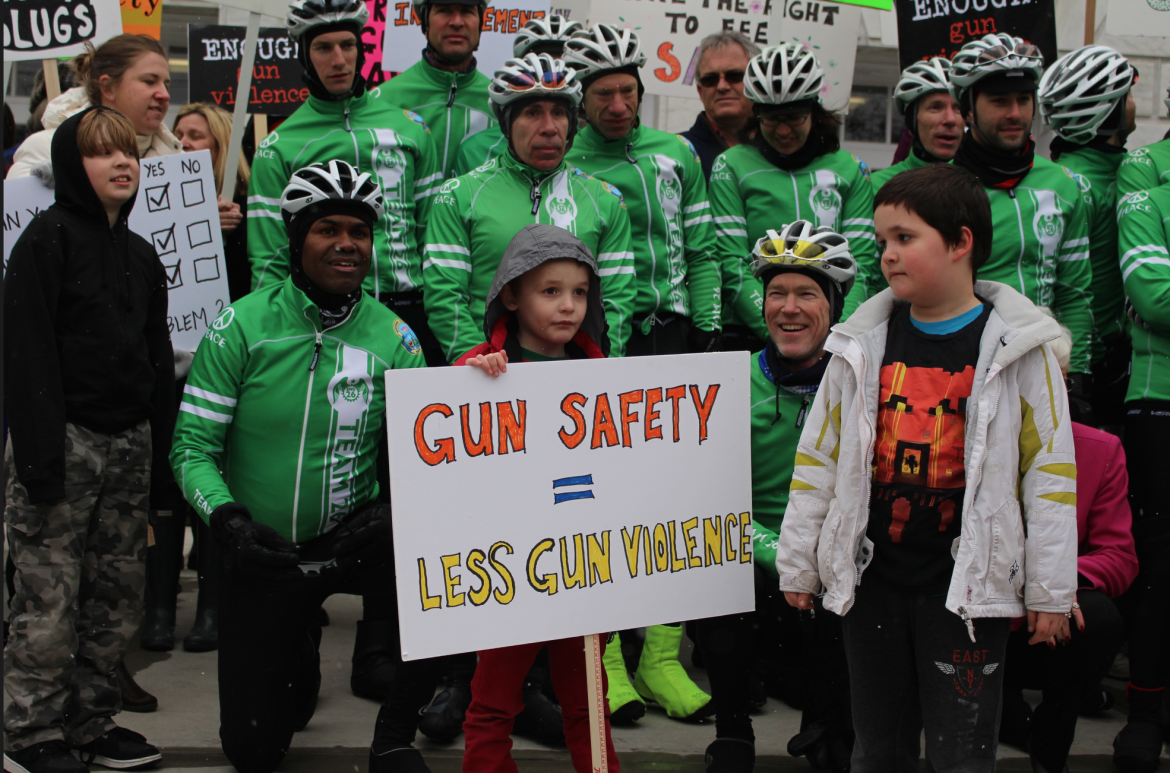 “Last fall Connecticut voters proved the strength of our movement by re-electing Gov. Malloy over his opponent who embraced the positions of the most extreme gun rights advocates,” Mr. Perloe said to a huge round of applause. “We returned to office more than 90% of the legislators who voted in favor of the historic 2013 gun law.”

“And Stamford voters wisely showed lawmakers that voting against common sense gun laws is career limiting. They tossed out one of the only Fairfied County law makers to vote no on the 2013 gun bill, and elected Caroline Simmons to the General Assembly.”

Monte Frank, who organized Team 26 and participates in the 400 mile ride also addressed the rally. “We ride for James Brady to make sure that his goal of universal background checks is achieved, and the will of 91% of the American public is recognized in Congress. We ride for Lori Jackson of Oxford, CT. We ride to restrict fire arms when a temporary restraining order is issued in domestic violence cases. We ride to end the iron pipeline of illegal weapons being driven into our cities,” Mr. Frank said. 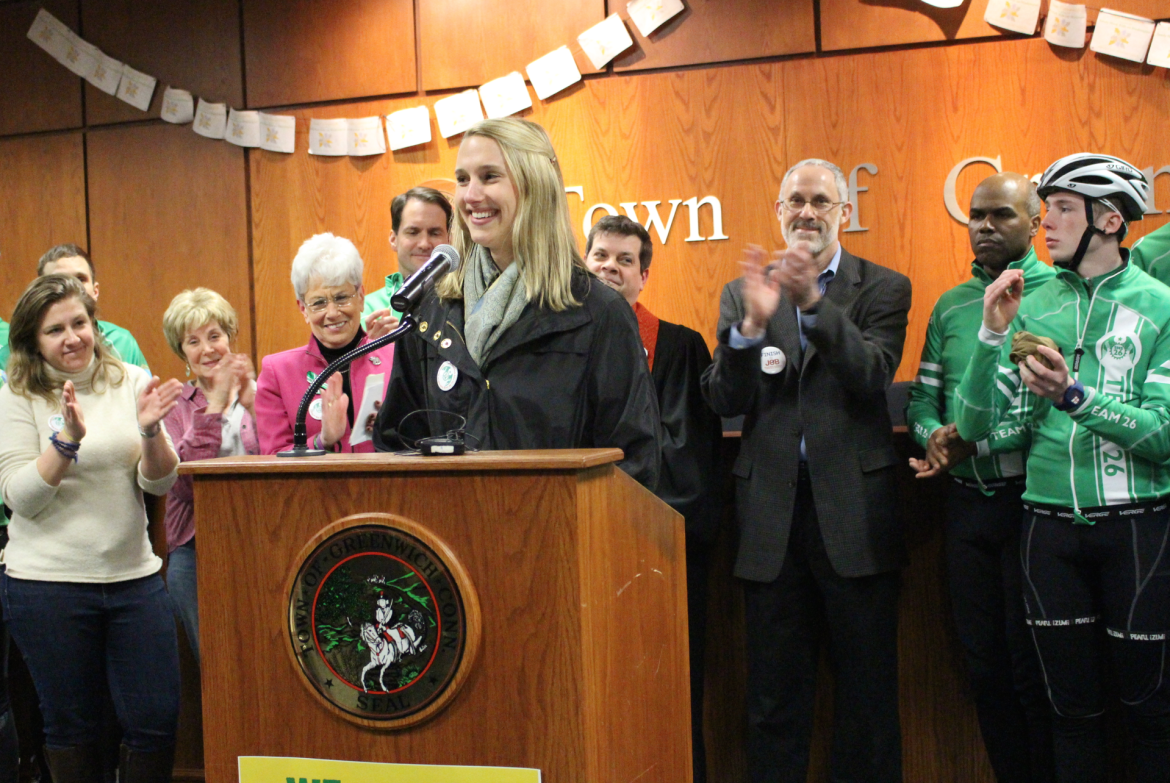 Stamford State Rep (D-Dist144) Caroline Simmons, who is from Greenwich, addresses the crowd at the Team 26 rally at Greenwich Town Hall on March 28. Credit: Leslie Yager

“What you’re doing today is amazing to me. Eighteen miles an hour is unbelievable! You are amazing,”  Lt. Governor Nancy Wyman said to Team 26. “We have to spread the word to other states that we have to protect the people of the nation. We don’t want to see, in any state, in any place, what we’ve seen in Connecticut. What people see every day when a gun is pointed at them at the hands of the wrong person.” 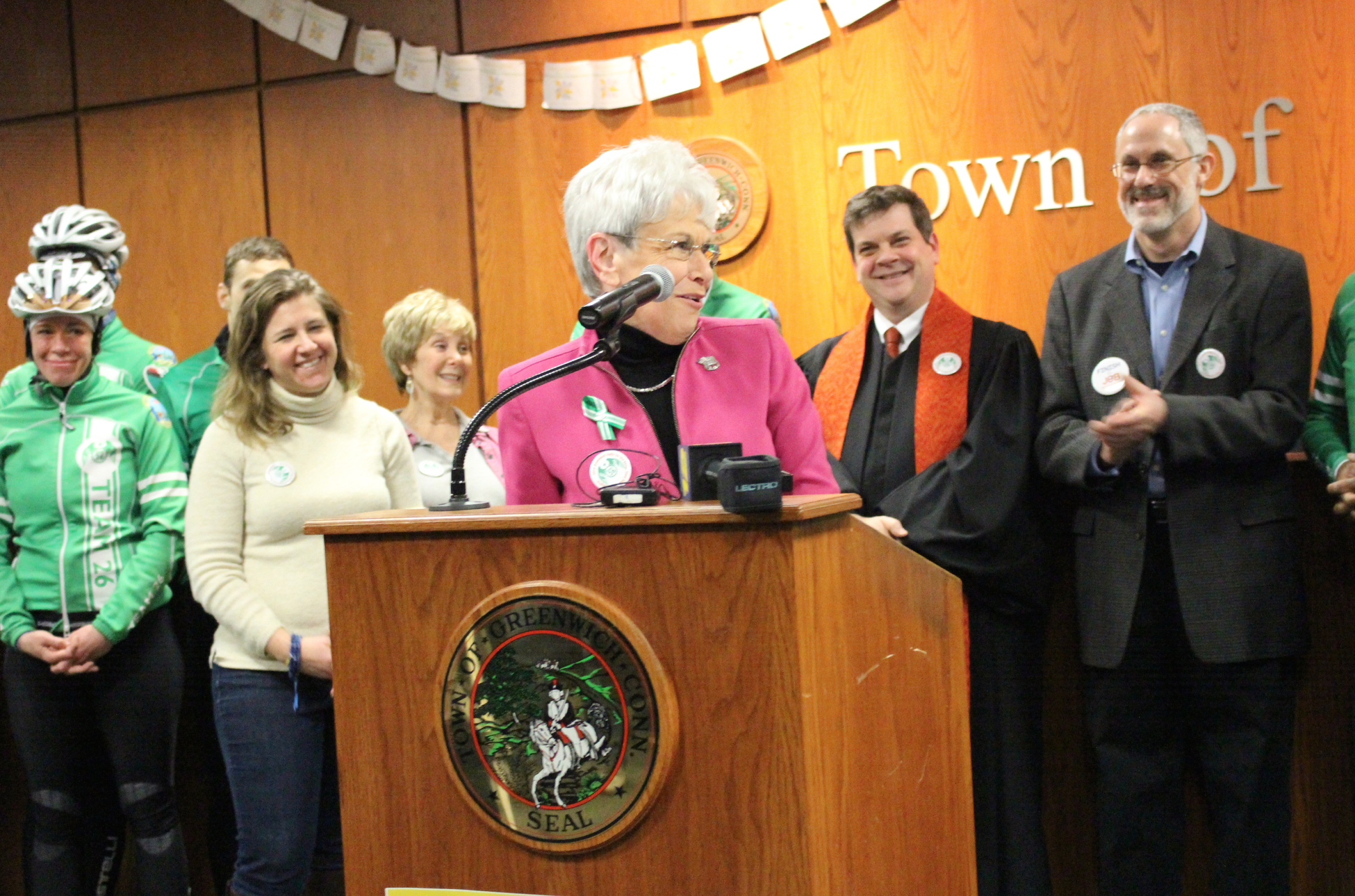 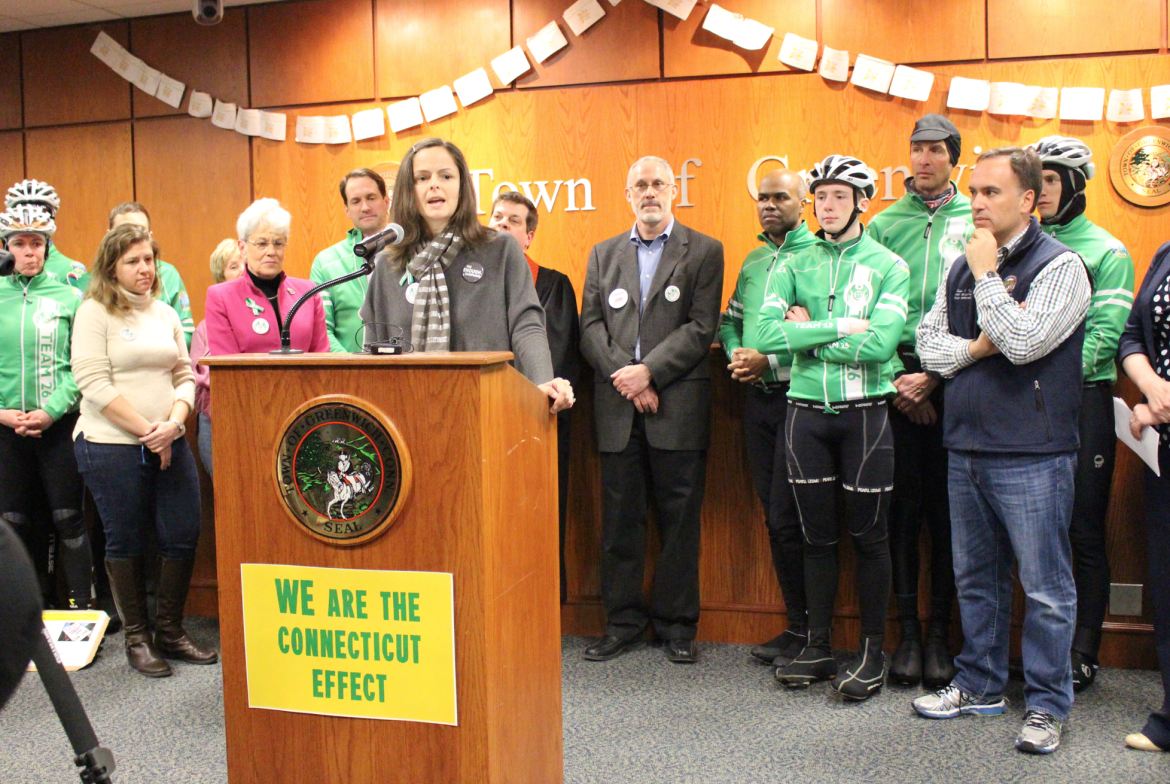 Wendy Skratt from The ENOUGH Campaign, based in Stamford. “This is why the citizen advocacy of Team26 is so important. Their drive to ride from Newtown to Washington DC gives us all the opportunities to gavther round them to show our support for their message that their message is coming from the not so silent majority any more. I’m not sure how many years it will take for Team 26 to finally ride to that capital to Congress to thank for Universal Background Checks,” she said. “I ask you to continue to show up and speak out with us until Congress acts.” Credit: Leslie Yager

Jim Himes, US Congressman (D-Conn) from Greenwich referred to the rally as an epic event, though he said he felt ambivalent about being at Town Hall.”Because I am a member of the institution which has been immobile in the face of all this country has death with, and deaf to the cries that came out of Newtown, that came out of Aurora, the violence because of the profusion of guns in this country. And that Congress has done nothing.”

Mr. Himes, who didn’t commit to ride the 400 miles to DC this year on bicycle, said there was a metaphor. “What we want is not that controversial. It’s not to take away American’s 2nd Amendment rights…It’s very basic, and the vast majority of Americans support it. We want to make sure before you exercise your 2nd amendment rights you’re not a terrorist, you’re not a felon, you don’t have a history of violence. We want an acknowledgement that some weapons are built solely for the purpose of war and don’t have a place on our streets.”

Mr. Himes said the “commons sense gun laws” should be non-partisan, but that it will take additional persistence. “In 1982,  when a US president was almost killed by a firearm  it took six years to pass the Brady Bill. It took consistency, steady work and commitment to finally get it done,” Mr. Himes said. 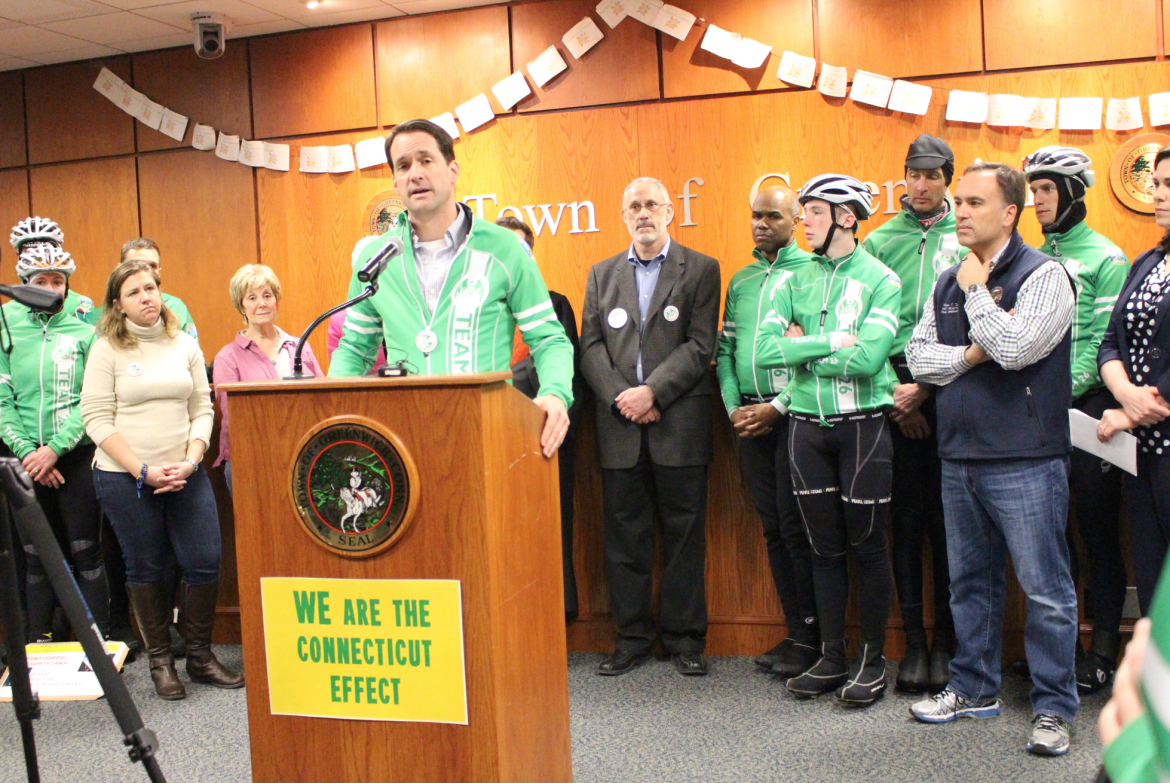 Greenwich YWCA Director of Domestic Abuse Services, Suzanne Adam said that under current Connecticut law, which includes some of the toughest gun laws in the nation, and progressive policies addressing domestic violence, “Nothing in Connecticut prohibits respondents from temporary Ex parte restraining orders from possessing firearms and ammunition. This is precisely the time to remove firearms from the equation.” 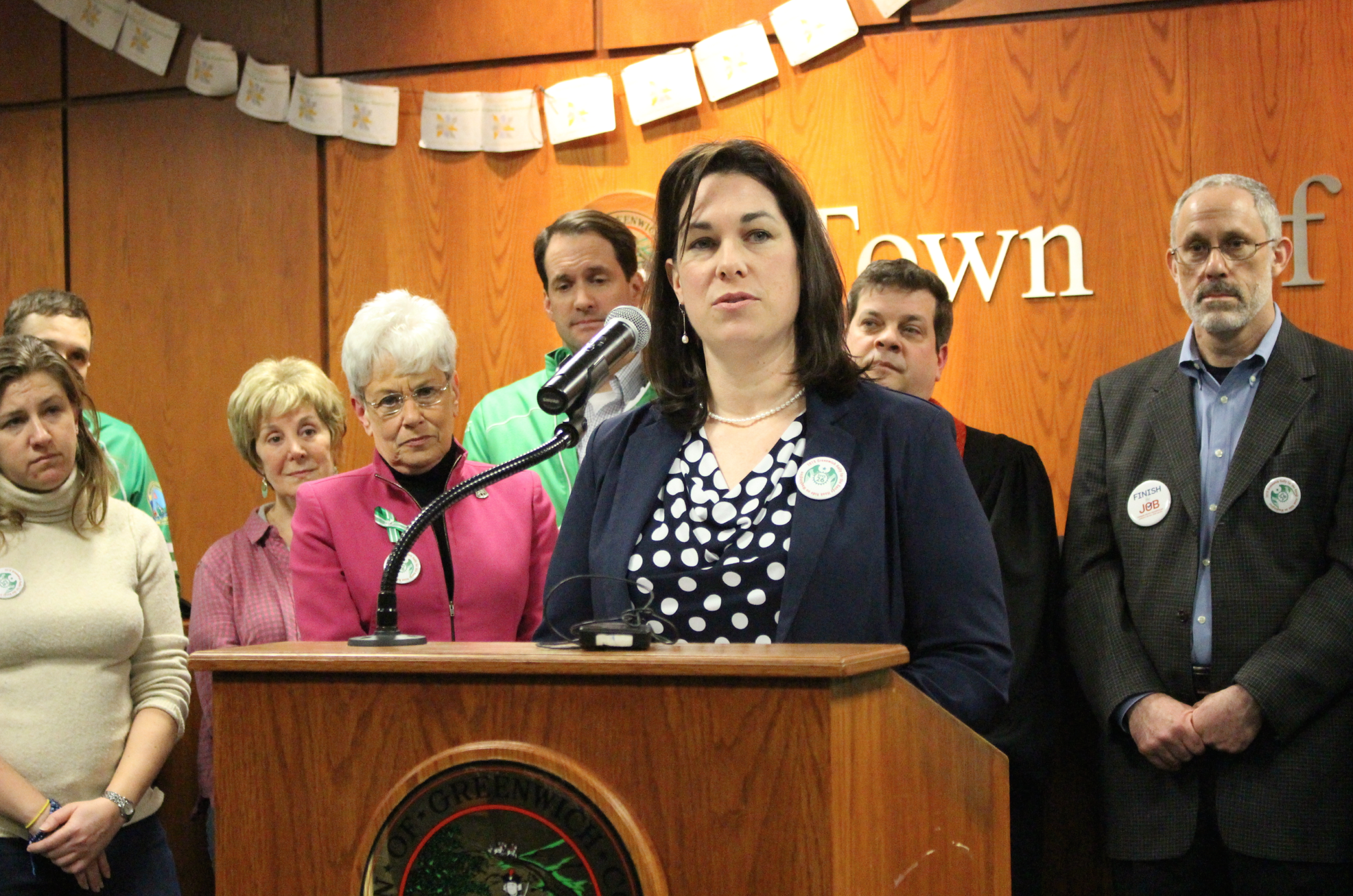 Mr. Tong said the Judiciary Committee saw more than a dozen bills designed to repeal the 2013 gun law. “None of those bills will be heard this year.” Of the bill named for Lori Jackson, he said many present, including Lt. Governor Nancy Wyman, waited for hours to testify and then were pilloried for hours about the 2nd amendment and gun rights. “They took her way off topic to distract attention from the bill,” Tong said. “The NRA was up there in force from Washington testifying before us, making all kids of arguments and twisting the Constitution, twisting the truth.”