The words that will longest be associated with Tuesday’s public hearing for a proposed 60 unit residential building at 143 Sound Beach Avenue in Old Greenwich will likely be “predatory developers,” “underparked” and “millenials.” 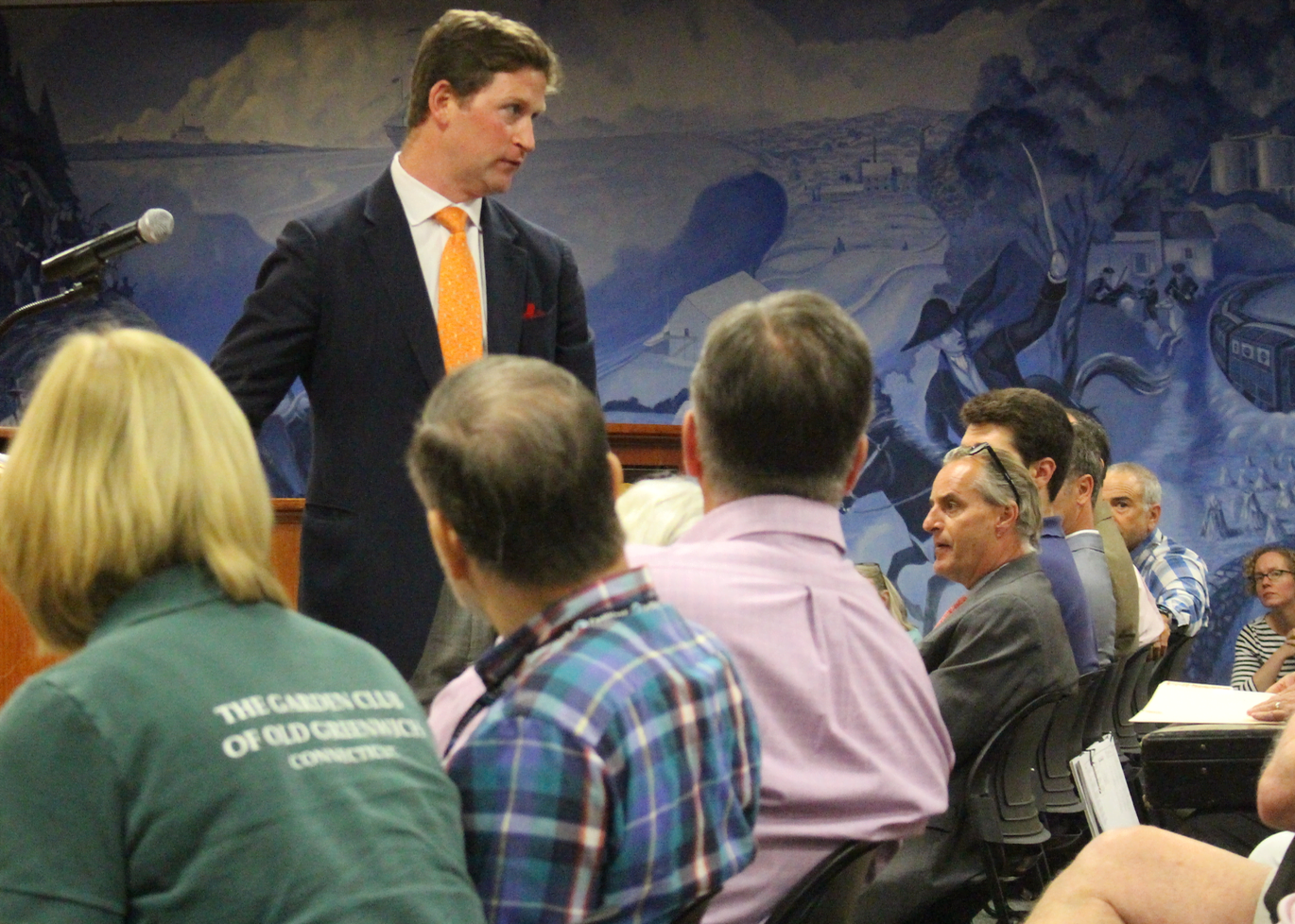 The Planning & Zoning hearing Tuesday night drew so many residents that it maxed out the occupancy of the town hall meeting room. Residents had to wait in the Cone Room upstairs for their turn. While waiting they watched a live stream of GCTV ch 79 while an application for a multi use building at Sheephill drew its own crowd downstairs.

Unlike the Sheephill proposal, the Sound Beach Ave development application, proposed by 143 Sound Beach Avenue Associates LP (registered to IVY REALTY XVIII, L.L.C.) came in under section 8-30g of Connecticut statutes, where 30% of units must be set aside as affordable for 40 years, and where half the apartments meet 80% of state median income, and other half are priced to target those at 60% of the state median income.

The development would replace a single story medical office building located at a major choke point into the village of Old Greenwich, just by the railroad underpass. 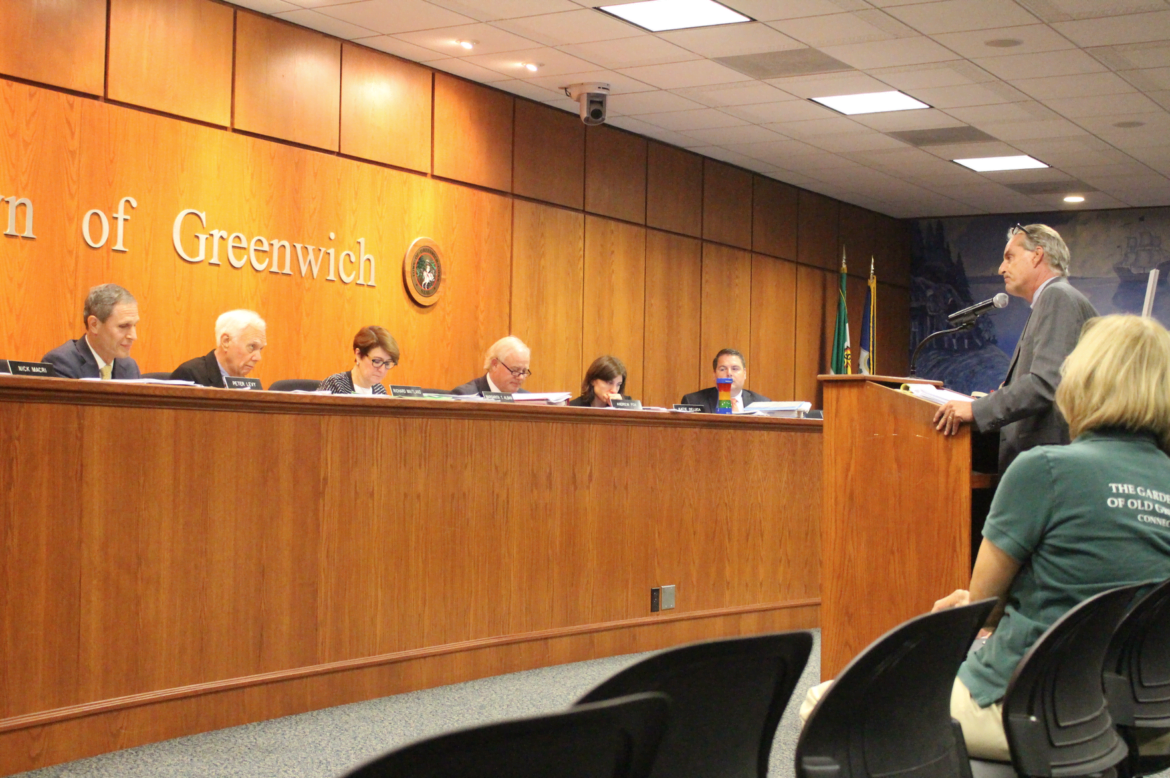 Indeed, access to a “transit district” was, according to attorney for the applicant, Chip Haslun, precisely why the 60 unit building would provide parking for a mere 47 cars. (Regs would require 110 parking spaces.)

At an earlier hearing in March, when the proposal was for 44 units and retail stores on the first floor, Mr. Haslun, had suggested the proposal would result in an overall reduction in traffic, which met with a chorus of laughter. Since March, he said the applicant had discovered retail tenants were not interested in the space.

“This is just not a viable retail building,” he said. “So we gave up on that application and came back under 8-30g and to add 16 units.” 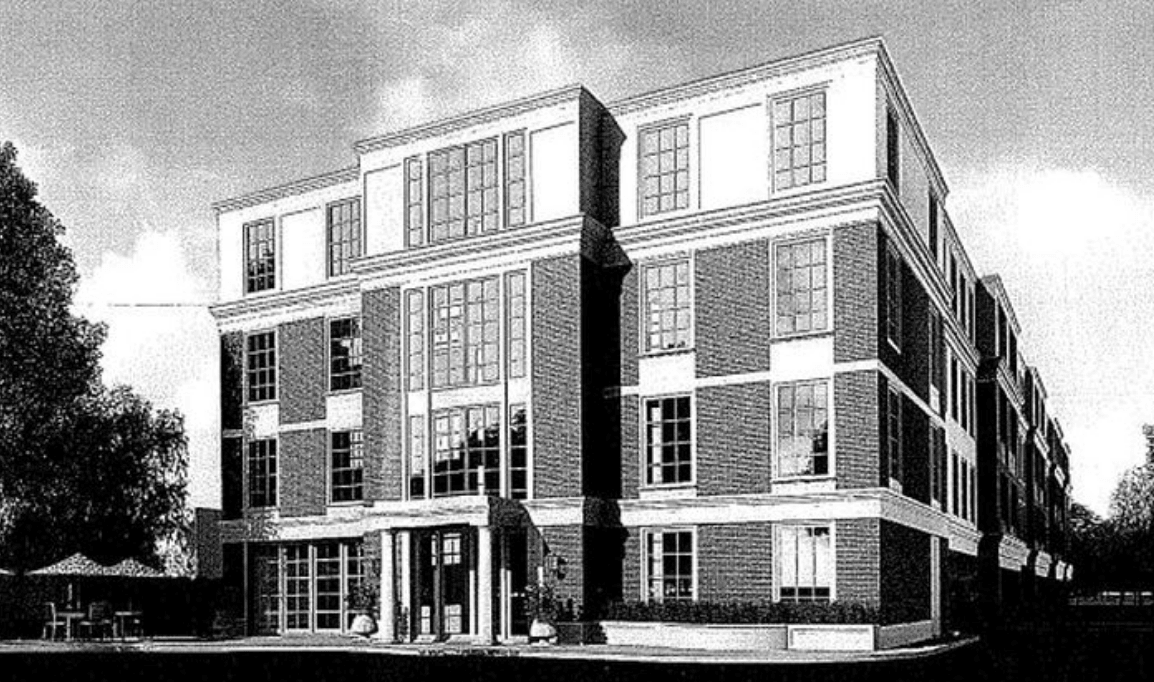 Haslun said the affordable units are subsidized by the developer, not the government which subsidizes Housing Authority properties in Greenwich.

Without the extra units, he said, “We don’t get the return…We had to add those units. It’s not meant to be a poke the eye at the commission or the community.”

“Parking as you know, we don’t fit the regulations,” he continued, which was met by an outburst from the crowd, who had to be reminded to remain quiet.

Haslun argued that the development would attract millenials who don’t own cars. He said millenials will take the train, Uber or Zipcars.

That’s where the fun started.

Resident after resident, each granted 3 minutes to speak, said the parking was woefully inadequate and that people who need an affordable apartment may be able to walk to King’s Market, but couldn’t afford to shop there.

It was suggested that residents in affordable apartments would likely prefer an inexpensive car and a short ride to Shoprite over the town line in Stamford than a walk to Kings.

“They won’t even be able to afford a scoop of ice cream at Darlene’s,” one resident said.

“You are creating a group of people forced to shop at Kings and walk to the beach. People who can’t enjoy the amenities because they don’t have transportation,” said one resident.

Further, residents argued that existing parking in the village is already very tight.

Sam Telerico Jr. who said he lives just south of railroad tracks in an apartment over the Rummage Room said people consistently park illegally in the private parking lot behind his building.

Telerico said people leave their cars in front of stores all day and go off to work. “Millenials in this environment will have a bike, and a car and will also use Uber,” he said.

Adam Tooter, adjacent neighbor from Potter Drive, who recently purchased his home and who was expecting the birth of his first child at any moment during the hearing, said affordable housing needs should not outweigh safety concerns.

“I do not trust them. This is our neighbor who does not shovel the sidewalk on cold snowy mornings and has a dead tree hanging over the sidewalk where our children play,” he began.

“I urge you to do what is right and acknowledge that Ivy Capital is a predatory developer” who is “….hiding expensive units behind affordable ones,” Mr. Tooter said.

“Nobody walks to Kings to save money,” he continued. “And nobody goes to our restaurants if you’re living in affordable housing.”

Mr. Tooter said that yes, residents make use of Uber. They also use Amazon. He pointed out that the Uber drivers take up parking spots while they wait for a fare. And, because of Amazon, delivery trucks are already a constant presence in the neighborhood.

Haslun said hoped the apartments would appeal to Old Greenwich School teachers, members of the Old Greenwich Fire Dept,  or employees at Kings Market, who could leave their cars parked at work overnight.  He said it was folly to continue “building theaters to cars.”

That suggestion met with audible gasps from the crowd.

“If you are going to negotiate with these businesses you have to let us know,” warned commissioner Margarita Alban.

“You’re assuming it’s part of an urban setting and part of an entire community,” said Alban. “You can’t be expecting them to use the commuter or municipal parking.”

The fee for a parking space at Old Greenwich train station is $475 dollars a year, for which there are years long wait lists.

One resident pointed out that although it is permitted to leave a car there overnight, the town might not be prepared to enforce removal of those cars by 5:00 or 6:00am when commuters arrive.

“We have all witnessed the penitentiary parking structure going up behind Kings,” said Paige Davis, a 24 year Old Greenwich resident. She said the parking structure under construction at the train station will have but one egress, and it will be onto Sound Beach Avenue.

“Because of the national trends, fewer and people in Greenwich are owning a car because people use Zipcars, bicycles and are going on the trains,” Haslun persisted.

“That applies to millenials,” Alban said. “Your development may appeal to millenials, but you have not specified that you are going to have that specific demographic. Go see if you can figure out the bus route,” she suggested.

“Many people do,” Haslun quipped.

“Cars are going to be a thing of the past,” Haslun said.

“Cars are a thing of the future,” commissioner Macri replied, adding, “And If I come see my friend, where am I going to park?”

“Two spaces are going to be used for Zipcars. They will share. We thought that you’d see that as a positive,” Haslun said.

“I don’t believe they took into account that it is not an isolated residential development, but rather an entire area associated with transit and also the village businesses below,” he said.

O’Rourke said the “typical parking demand” in a 60 unit building would be 1/2 a parking space per dwelling unit.

“Your assumptions seem more relevant to an urban context than a suburban context,” said Richard Maitland, chair of the P&Z commission. “It’s inconceivable to me that living in the nice apartment that I’m not going to want to go somewhere else.”

Susie Orbanowski of the Old Greenwich Tennis Academy said, “Our parking lot is empty at night and I cringe at the thought that we would be invaded by the parking from next door.”

David Fox, a 40 year resident of Old Greenwich, said the 1/2-car-per-unit parking formula reminded him of a 1980s study of experts from Harvard who predicted that the average family in Old Greenwich would have 1-1/2 children.

“And therefore we were going to close the Old Greenwich School,” Fox said. “You hear the facts, and it ain’t true.”

Darrell DeMakes a VP for the Riverside Association described the millennials argument as a red herring.

“They probably wouldn’t be able to make market rent,” he said. “Stamford has a tremendous amount of inventory. They’ve overbuilt in the area of millenials.”

Stephen Meskers of Lockwood Ave in Old Greenwich, the father of three millenials, said the notion that millenials will not need cars is ludicrous. “Uber is a Friday night event if there is a bar involved.”

Furthermore, Meskers suggested people in one bedroom units would be couples who own two cars.

Mike Warner who was a member of the original First Selectman’s Housing Task Force said he was worried the town would wind up with “a white elephant on our hands.”

Attorney for the Tooters, James Fulton, said the objective of 830-g was other than sound land use planning, which he urged the commission to consider. He took issue with the recommendations of the applicant’s traffic engineer, Mr. O’Rourke and his firm Adler Consulting.

“I once tried to hire Mr. Adler’s firm, but they wouldn’t let me hire them. ‘We only represent applicants, you do opposition work, we can’t help you,'” he recalled them saying.

Traffic
Residents and commissioners took issue with the applicant’s traffic study which was conducted by Adler Consulting on April 29, a nice day that they likened to a typical summer beach day in terms of traffic down Sound Beach Avenue.

“While we found summer-type operating conditions in April, typically one does not do traffic counts in June, July, or August because it is not typical,” O’Rourke said, and residents burst out laughing.

Commissioner Andy Fox asked O’Rourke twice, why he hadn’t listened to residents’ warnings about beach traffic during the March hearing.

“It is our intention to do another count in August before we come back in September,” Haslun said.

Arline Lomazzo said she had new beach traffic counts from Parks & Rec, which has increased significantly every year since the town lost a lawsuit brought by Brenden P. Leydon to open Greenwich Point to non residents.

The issue of safety of children came up many times.

“We are all afraid to let our kids ride their bikes to Perrot and to the beach,” one longtime resident said.

Darren Schneider, with four children of his own, said there is a disproportionate number of children in Old Greenwich.

“My kids bike to Perrot Library, to the Tennis Academy and to Binney Park,” he said. “I fully believe to have another 60 units is a disservice to public health, safety and welfare of the children of Old Greenwich.”

Suzanne Prunier, a 54 year resident of Greenwich, said she was concerned about the development resulting in a domino effect.

“Who is to stop another developer?” she asked. “It’ll set a precedent. That’s a concern.”

One of the last barbs was directed toward the architect, Rich Granoff.

“It’s ugly, commercial looking, and doesn’t suit the character of the village,” said Carl Anderson. ” Maybe it belongs on the Post Road. It’s an eyesore. It has no Colonial character to it whatsoever. Sorry Mr. Granoff, that’s my feelings.”

In terms of next steps, Mrs. Alban said that if the commission were to approve the application, it would be because it would be desirable to the targeted demographics, which in this case would be millenials.

“You have to demonstrate to us that you can accommodate those people and that the lack of parking will be okay. That’s your burden,” Alban said. “I think you’ve structured it in a way that will be a burden to people. You have to convince us that your target population is going to live there in spite of you not having parking.”

“Parking is not a matter of health or safety,” Haslun said. “Let me think about it. I don’t understand how to do it.”

Commissioner Peter Levy addressed Mr. Haslun. “You make a lot of assumptions that I don’t know how you back it up. Your assumptions – I’ve never seen them to be true anywhere else.”

At the end of the hearing, the commission agreed to keep the application open. There will be another hearing in September.

“We’ll do another traffic study and see you in September,” Haslun said, also agreeing to incorporate the additional beach traffic data from Parks & Rec.