On Thursday night, the Planning and Zoning commission met at town hall. Notably absent was anyone from the Board of Education, who were first on the agenda for their application to bring in temporary lights powered by generators at Central Middle School to be used for the Greenwich High School boys rugby team. The commission skipped to the second item on the agenda and then asked if the Board of Education had arrived. They hadn’t. Many in the audience were eager to hear the application heard, including reporters and many of the CMS neighbors. It was not to be.

Further down the agenda was the application for a four story, 60 unit apartment building at 143 Sound Beach Ave in Old Greenwich, a project that is roundly deficient in parking, yet may be exempt from that and other regulations under the 8-30g state statute created to encourage developers to construct affordable housing.

The statute overrides local zoning laws if a municipality doesn’t have 10% of its housing listed as affordable, which Greenwich does not.

Again, the town hall meeting room was full to capacity. 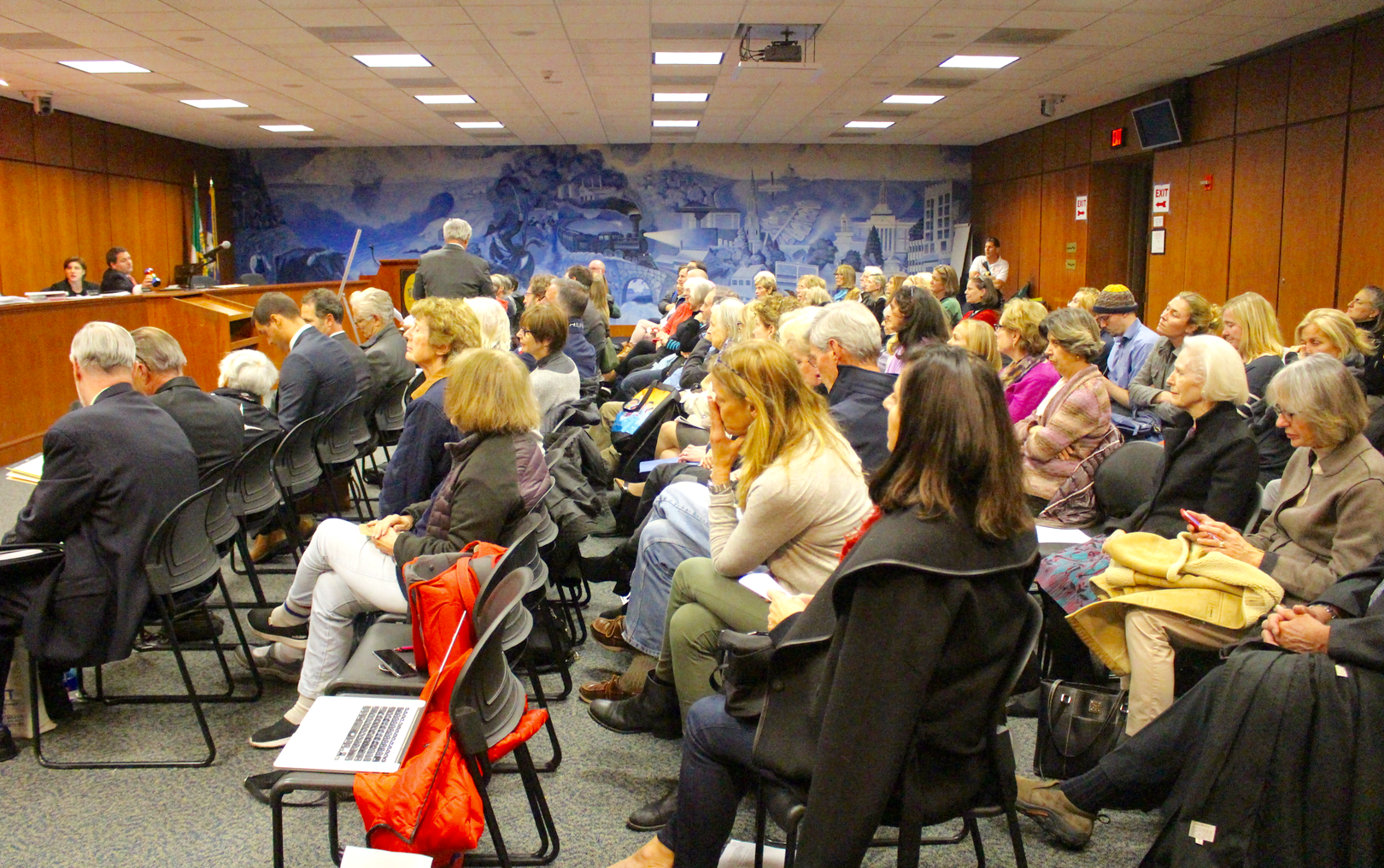 While the entire meeting felt like déjà vu, as the applicant hadn’t, since the last hearing, significantly updated the proposal to respond to the Planning & Zoning commission’s concerns, a neighbor on Potter Drive, Adam Tooter, surmised the reason.

“Ivy Capital didn’t make any changes to their application because they feel they can win in court,” he said. 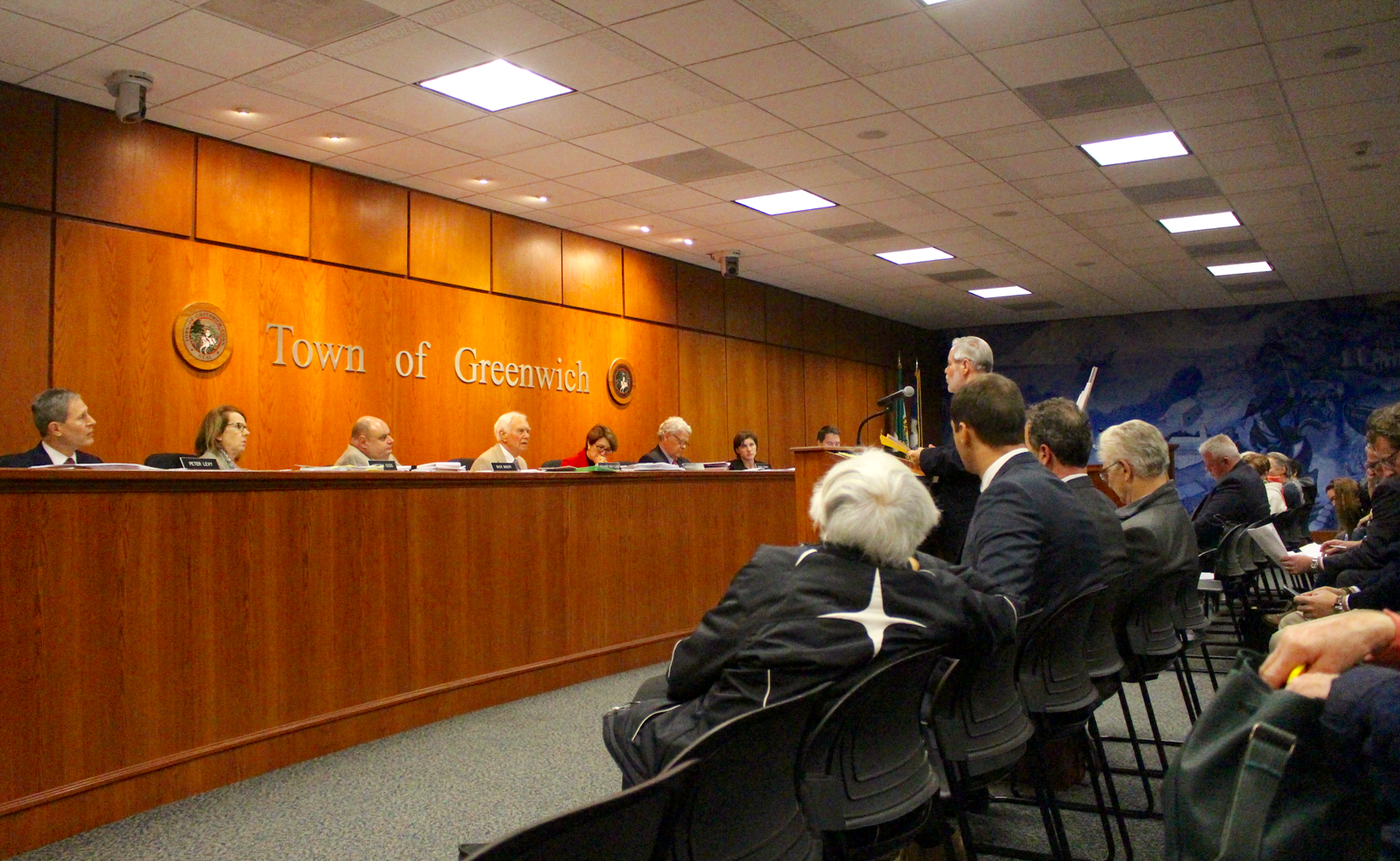 Again, the attorney for the applicant Chip Haslun and traffic engineer Michael O’Rourke suggested that residents would use Transportation Association of Greenwich (TAG), Zipcars or Metro-North instead of owning cars. (The 6o unit building is still proposed to have just 47 parking spaces.)

Again the standing room only crowd burst into laughter.

The commission asked what would happen if the applicant couldn’t find tenants willing to rent if there was no parking spot.  Haslun replied, “It’s a financial risk my clients are taking.”

That didn’t go down well with the commission or Mr. Tooter’s attorney, James Fulton.

“You don’t want partially empty buildings. It invites vandalism, deterioration and crime. You can’t approve it if they say, ‘We’ll take the risk,'” he said to a round of applause.

P&Z chair Richard Maitland said the applicant had submitted studies of parking in an urban Transit Oriented Development (TOD) that undermined their case.

“In these urban studies, my reading of their findings was that the standard of 1.2 spaces per unit was the appropriate standard. …You’re not even close to the 1.2,” Maitland said.

Again there was a conversation about fire safety. Haslun described J Lofts in Chickahominy as a similar structure in that it has only single-sided fire access. He pointed out that P&Z had approved that project with a note about it being “Transit Oriented Development” (TOD).

Mr. Maitland said he disagreed, and that the Sound Beach Ave application didn’t have the same “openness” as J Lofts.

Commissioners read a letter from Greenwich Fire Chief Siecienski, who expressed concerns about the single-sided access. Siecienski said the proposal “continues to place the burden of site restrictions on responders” and that the Old Greenwich Fire station’s three firefighters with a 24-foot extension ladder (standard on Engines) would be easily overwhelmed.

“I remain concerned and opposed to the project,” Siecienski wrote in conclusion.

The applicant’s fire code expert said because of limited aerial access and limited staffing in the Old Greenwich fire house, it would be impractical to rely on ground ladders, but that the application included a series of building enhancements including “compartmentalization” and a “robust” 13R system sprinkler system.

Neighbors testified that an influx of residents relying on on street parking would hurt local businesses.

The applicant’s traffic expert said he’d identified 26 parking spaces in the vicinity of the development, mentioning Webb Ave and Forest Ave as places that tenants of 143 Sound Beach Ave could park overnight.

Mrs. DeLuca said street parking is governed by the town charter and the Board of Selectmen, and that while parking is not metered, there are considerable time restrictions for parking during the day, as well as a prohibition of overnight parking for all the roads in close proximity to the site.

There was also push back on the applicant’s expectation that tenants could park in the expanded Old Greenwich train station parking lot.

Again, David Spear of DLS Traffic Engineering LLC, a traffic consultant representing the neighbors, said not only is there a 3 year wait list for spots, but that the applicant hadn’t accounted the expanded train station bringing in an overall increase in traffic. He said there will be bigger platforms, longer trains and more cars heading in and out of the lot.

To the applicant’s argument that tenants would not dart across Sound Beach Ave, but rather use the stairs to go up and over, Spear said a DOT project manager told him that when the stairs are reopened, some people will use them, but others will choose to walk across the street.

“The closer you live to the RR station, the closer you cut your time,” Spear said. “So if you’re right next door, you’re splitting hairs and if you’re running behind you don’ take the stairs, you run across the road.”

Lastly, Spear said that if the deficient parking pushes residents off site to search for parking, they’ll add pedestrian activity, which increases the interaction with pedestrians and vehicles and the probability of conflict.

Again, Diane Fox, the town’s retired P&Z director argued that the town does have quite a bit of affordable housing. In fact, since the last hearing she’d investigated further and determined that between grandfathered or legally nonconforming homes with accessory apartments, and housing provided for staff by private schools, private clubs and Greenwich Hospital, the  town meets the 10% affordable marker.

However, the current P&Z director, Katie DeLuca said that hospital, private schools and club housing doesn’t count toward the 10% because those units are not publicly available.

Ms. Fox said that per the POCD, moderate income housing is encouraged along the Post Road, which can handle additional traffic volume and that the housing can be incorporated as part of mixed use buildings.

Fox said the Patio.com site was approved for mixed use development with moderate priced housing, and that the commission had acknowledged the site meets all relevant criteria.

Attorney James Fulton, representing neighbors, urged the commission to reject the application and cited an affordable housing lawsuit brought by Garden Homes of Stamford over their application to build a 47 unit building in Westport. He said Judge Marshall Berger upheld a Westport P&Z denial of the Garden Homes proposal.

“Judge Berger didn’t like when Garden Homes did not come back with revisions,” Fulton said, suggesting that the applicant in Old Greenwich was doing likewise.

In the end, the applicant’s attorney said he was familiar with the difficulties of finding affordable housing, and that someone in his family had drafted the 8-30g regulation.

“It is so very difficult to get towns to build affordable housing, that’s why they created 8-30g,” he reminded the commissioners. “Towns have good intentions, but when push comes to shove, it just wasn’t being done.”

Haslun said the idea was to create a mechanism to push towns to ensure that 10% of their housing is affordable.

“It just never gets built,” he said. “We’ll continue on to the court system. I have a feeling there is going to be an appeal.”

The commission closed the application but said they needed time to review materials submitted by the applicant just before the meeting before taking a vote.