An application was heard by P&Z on Tuesday for a major Fareri Associates development project straddling West Putnam Ave between Valley Drive and Weaver Street.

On the south side of Putnam Ave an office building at 500 West Putnam (next door to Citarella) would remain, but another building would be constructed adjacent to it that would include 35 housing units of which 8 would be “moderate income” under the town regulation Sec. 6-110. This is also referred to as “workforce housing.”

The abandoned, crumbling CT Art Institute would be demolished and the massive rock outcroppings it sits on would be blasted to level the property. The applicant proposes to replace those buildings with two mixed use buildings containing 67 residential units. Of those, 14 would “moderate income.” There would also be two retail spaces and the applicant anticipates leasing one to a grocery store and the other to a fitness center.

The commission balked at the idea of yet another fitness center, especially one right up close to the street. They said they’d prefer a restaurant there.

There were also questions about integrating the development into the surrounding office buildings at Greenwich Office Park, and whether those office workers setting out to eat in a restaurant at 581-585, shop in the new supermarket, or cross over to Citarella would be able to walk safely. The applicant’s Attorney John Tesei said there would be pathways within the complex and that the rejiggered intersection would have an additional lane of traffic, plus two pedestrian crosswalks.

“That’s what you’re trying to sell us on – that it’s going to be great for this whole office park because there’s no great places to eat now,” acting P&Z chair Margarita Alban said. “But what if they (pedestrians) have to battle on the street?”

Later in the meeting, which went until about 1:40am, she said, “We have time. Fix it. Get it resolved. Think about your pedestrian internal circulation.”

Commissioner Nick Macri said the Zoning Enforcement Officer Jodi Couture was concerned about the height of the building’s bulkheads.

“Let’s talk about height,” he said. “What they’re perceiving is very large. People ask, ‘Why is this building so big?’” He said that with the double height spaces on first floor, there is a perception of the building having five stories. He said he was concerned about the sense of over development on West Putnam Ave considering the very tall wall proposed. “And it’s very close to the Post Road.”

“You are micromanaging how an owner is going to fill up his space,” he said. “You’re dealing with an experienced owner. We’re not building on a to-suit basis for a tenant. This has to have the capability of fitting a variety of tenants. In an ideal world, we’d have the restaurants in the front of the building. We want to not wait to develop this property. It’s been sitting long enough.”

Mr. Macri said, “You’re not really designing a building for a specific type of tenant, but … it’s got to be perfect because it’s going to be here a very long time.”

Macri referred to the building that is home to CVS, saying some people love it and others hate it. “It’s there forever. So we have to get it right.”

“Mr. Fareri builds handsome buildings,” Tesei said. “You commented how well the 500 office building looks. I think you’re technically, who the applicant is, show a willingness to work.” 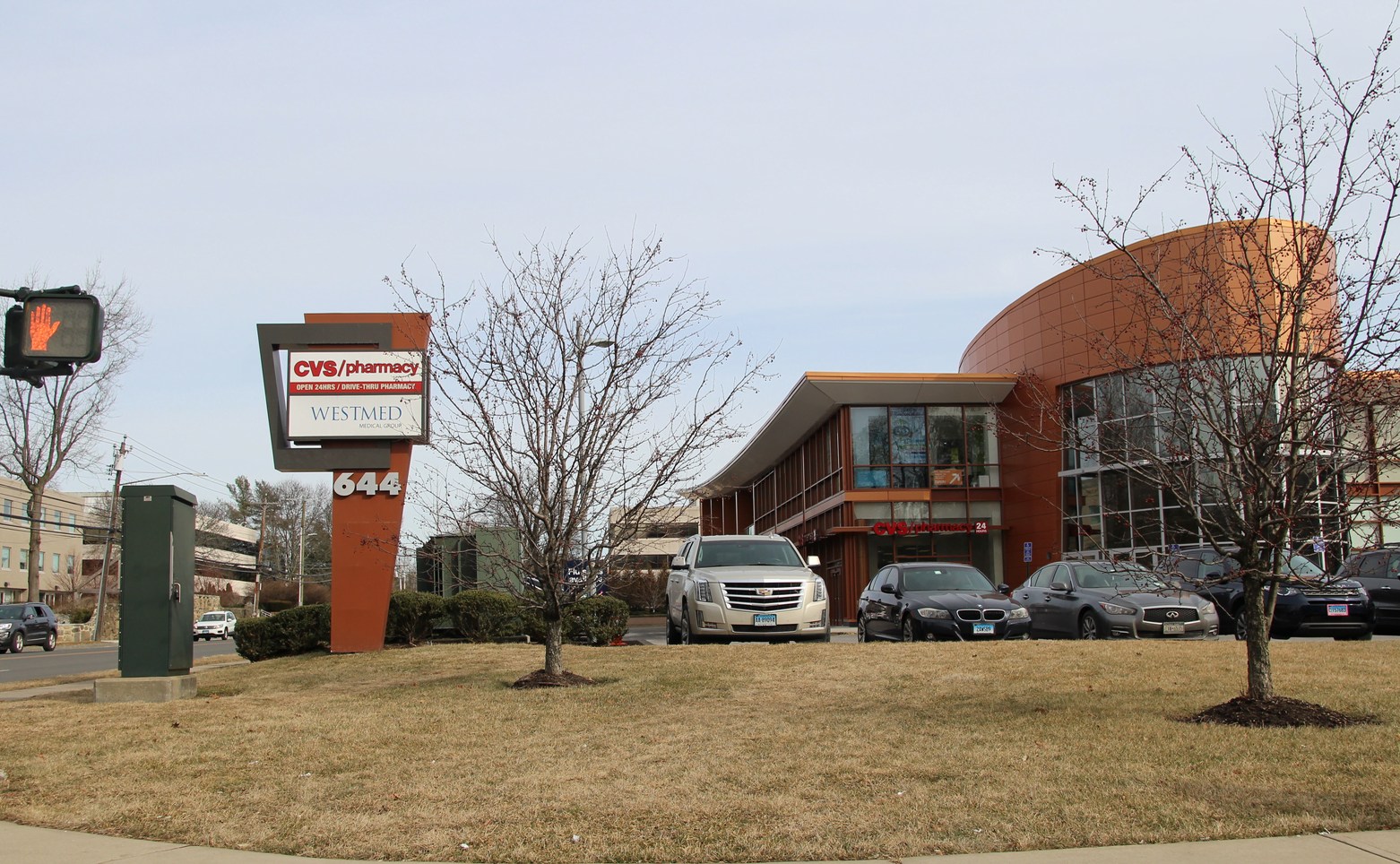 “We’re not attempting to micro manage private property owners. But we have an obligation, because you’re asking for considerable variances from as-of-right with our affordable,” Commissioner Dave Hardman said to Mr. Tesei, referring to the extra FAR and height the applicant would receive in exchange for including moderately priced housing units.

“The building coverage greatly exceeds what you could be restricted to (without the moderate income housing),” Hardman pointed out. “At what point does it become too much? Doing the simple math, two buildings rather than one, you have the illusion of something much bigger.”

“We spent an incredible amount of time looking at different iterations,” Tesei replied. “And this plan has been around for more than a year now. We’ve had to undertake a substantial amount of traffic analysis and we worked very hard with the ARC. You have to look at your process, if this commission is going to come around after we’ve been encouraged to go forward, and we can come here and wipe the whole slate clean because a few of us don’t like it.”

“They’ve been saying this all along,” Alban said, referring to previous P&Z feedback that the proposed development would be perceived as massive from West Putnam Ave. “This is the not the first time you heard the question about the double height on the ground floor.”

“But we’re following the process,” Tesei said. “There’s a lot of good that comes out of this for the Town of Greenwich. I’m hot hearing what the big problem is. …I don’t get it. A four-story building is permitted.”

“We’re starting with a double height entrance in one story so you have the perception of five stories,” Macri said.

“It is overpowering to the road,” said commissioner Andy Fox. “The commission wants to see a restaurant there and not another fitness club. The idea of fitness on our front doorstep – maybe that’s all you can rent, but if that’s what you’re investing this money for, why do we need this extra high space so close to the Post Road?”

The commission asked Architect Richard Granoff to explain why he designed two buildings instead of one.

“Also,” he said, “The current building is actually taller than what you are looking at because it sits on a ledge.”

Granoff said that unlike Citarella across the street where the parking is very tight, the front of 581/585 features a pedestrian sidewalk.

“The front is almost like a pocket park and includes outdoor dining,” he said. “You can’t drive right up to the front.”

“We’re worried about over development because you have development on both sides,” Macri said.

“People on this side of town appreciate the outdoor dining,” Tesei said. “There is much more to this application than moderate income. We’re also building another traffic lane, for a right hand turn.”

“The balance we seek to find we might not be getting,” Macri said. “We’re getting something very very large, and some units.”

Ms. Alban mentioned an article in Greenwich Time about the proposed development and noted that P&Z received neither comments in writing nor public comments at the hearing (though that might be because the public would have had to wait until 11:00pm to testify).

Mr. Fareri addressed the commission. “We were trying to do something positive. Improve the streetscape. When you look at J lofts, I don’t think it is high,” he said. “Look at what’s there now? An attractive building? No?”

Mr. Fareri said the site is not conducive to either office space or a car dealership.

Across the street, regarding the proposed project at 500/600 West Putnam Ave, acting chair Ms. Alban took issue with a proposed “green wall” which the applicant called a hanging garden. She said Equinox had installed one but it had not thrived.

She said a green wall could be wiped out by a single storm, and what remains is a massive unattractive wall.

“If the landscaping is not evergreen, what you’ll see from Post Road is a solid constructed wall,” Alban said. “In Port Chester they have garages that don’t look like garages. You could do something like The Mariner in Port Chester that looks attractive.”

At the close of the meeting, which wrapped up at 1:40am, the commission left the application open. They asked the applicant’s attorney Mr. Tesei to return with details on parking at the existing building at 500 West Putnam Ave (next to Citarella), where there is a parking arrangement with medical professionals.

The issue is that not all the medical office space is occupied, and the possibility that the parking count had focused on doctors, despite physicians assistants having their own appointments at 15 minute intervals all day long.

The commissioners said the applicant’s information on parking counts was difficult to follow.

“We’re looking for the information in tabular form, not alluded to in a narrative,” Ms. Alban said. “Give us a complete table with all the medical people in the whole building.”

Commissioner Andy Fox agreed. “We need a chart to give to staff so that when there is a change of use, we can do the math simply.”

“Address the parking concerns,” Alban said. “We are not going to endorse it prior to a vote. And you don’t want to convert to preliminary. Go to ZBA because you can’t move forward without them.”

Waiting until after 1:00am to testify, former P&Z director Diane Fox, representing Whitnum & Reed, also questioned the parking counts which she said were based on “medical professionals” and questioned whether they included physicians assistants, nurse practitioners and  physical therapists. “Is everyone there affiliated with Greenwich Hospital?” she asked. She also asked about parking for construction workers and office workers during construction. 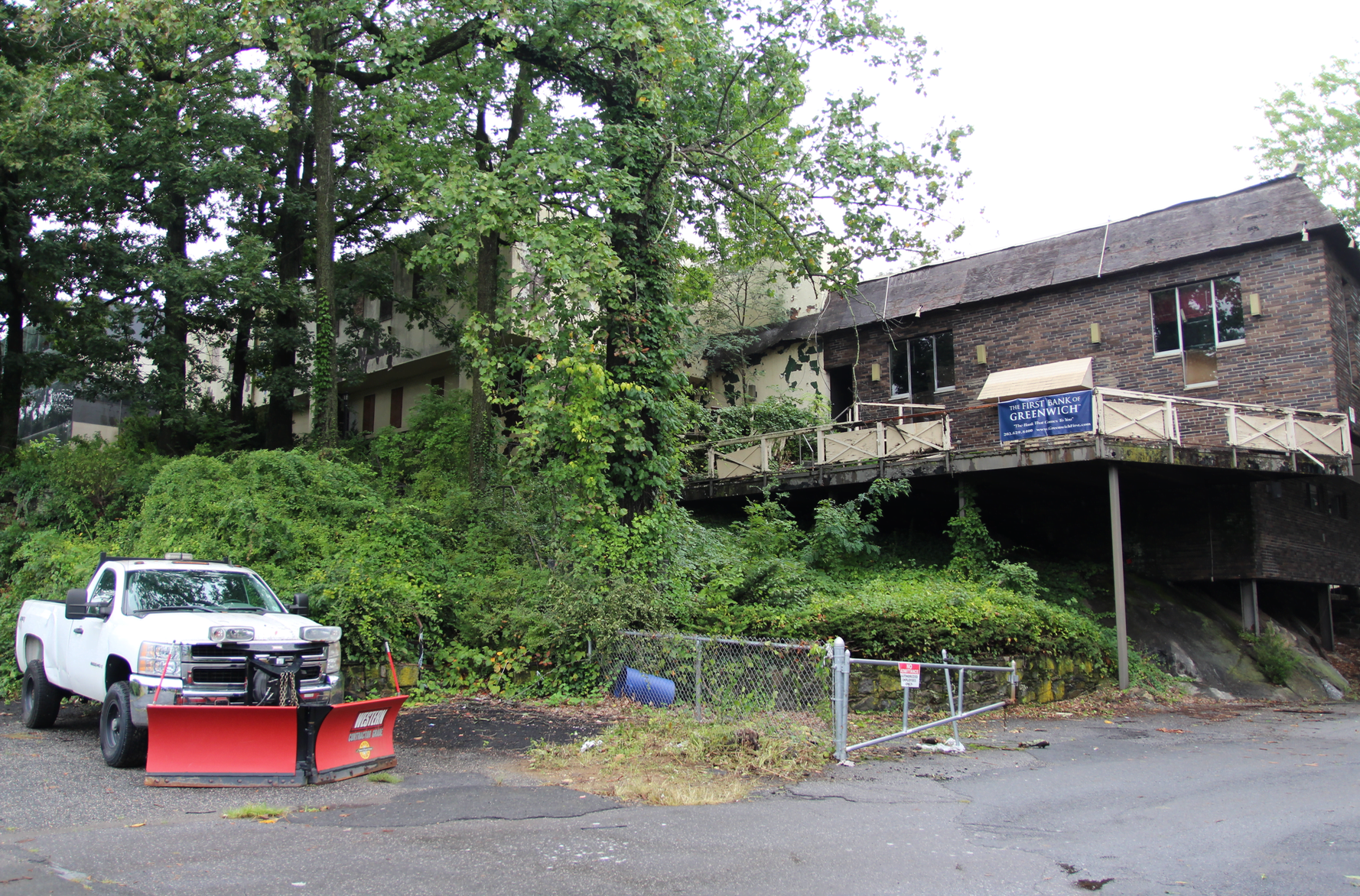