On Monday night the Greenwich Town Hall meeting room was packed for an hour long joint RTM committee meeting, the topic of which was a sense of the meeting resolution against tolls in Connecticut.

The resolution was submitted by Laura Gladstone who is not a member of the RTM who was able to put her resolution in front of the RTM by fulfilling the requirement of gathering 25 signatures of registered voters.

A “yes” vote indicated support for the anti-toll resolution.

A “no” vote was against the anti-toll resolution, which did not necessarily mean support of tolls. In the Land Use committee meeting, for example, several members said they didn’t have enough information to form an opinion.

Committee votes were as follows:

Land Use voted against the resolution: 4 yes and 7 no.

Legislative and Rules voted against the resolution: 5 yes and 7 no.

Transportation voted in favor of the resolution: 6 yes and 4 no.

Public Works voted in favor of the resolution: 9 yes and 1 no, with one abstention.

Finance (the committee voted to take a vote on the resolution on Monday night). Their vote was 9 yes and 3 no.

The resolution will go before the full RTM on Monday, April 8. 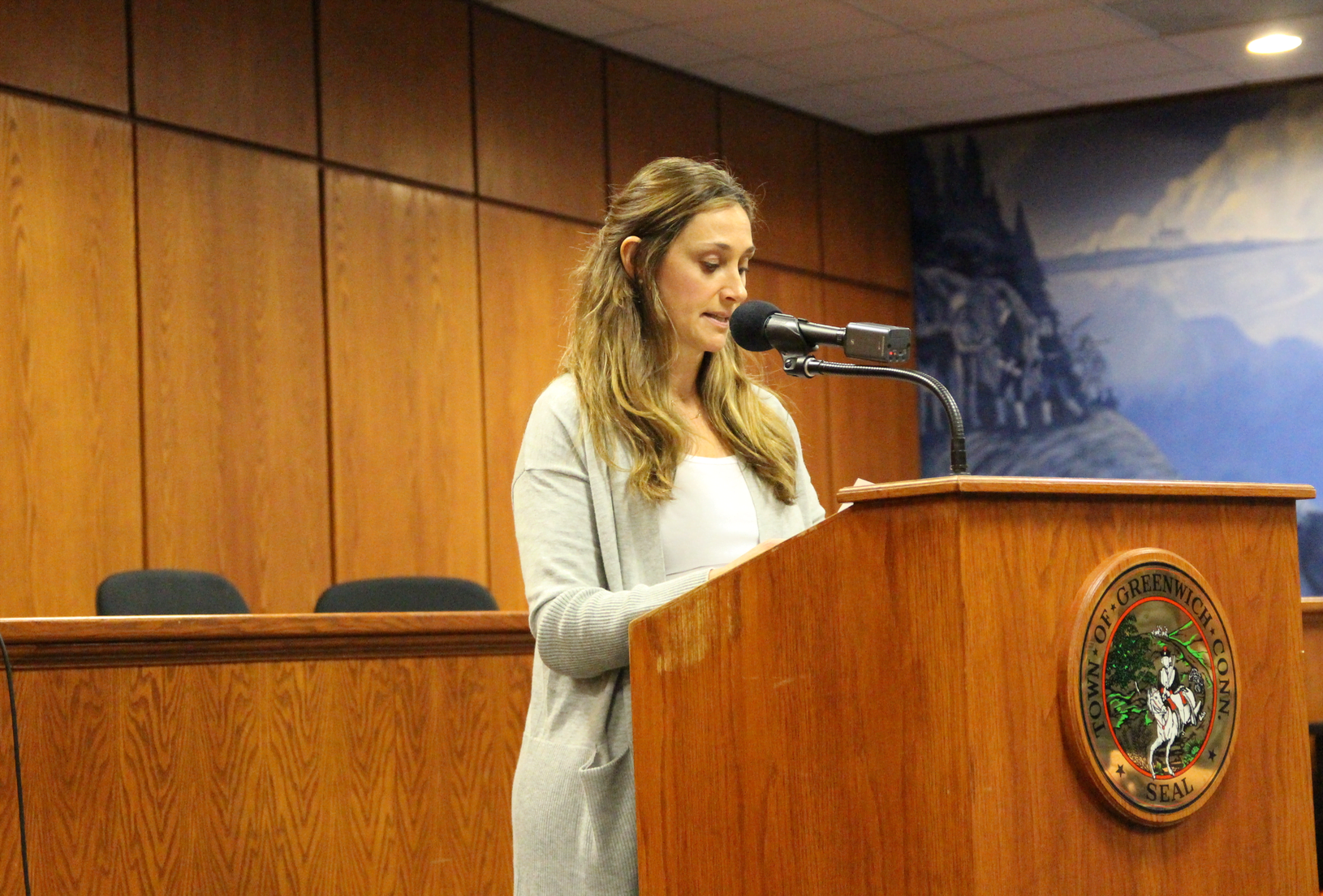 Gladstone’s resolution said tolls would pose a “substantial burden” on the people of Connecticut and drivers would avoid “costly tolls,” resulting in increased traffic and pollution on local roads and neighborhoods.

The resolution also said, “residents of Greenwich already pay more in taxes and fees than most residents in states around the country.”

Gladstone said Greenwich is the largest town in the state geographically, and contributes the most to Hartford, and a resolution against tolls would send Hartford a strong message.

“Connecticut tolls are an antiquated idea that does not work,” Gladsone said, adding that tolls would impact Greenwich residents who commute to other parts of the state and vice versa.

She said tolls would “limit vacations for their families, sports for their children and even mortgages and rent payments.”

Gladstone cited a recent study by Sacred Heart University that showed that 54% of people polled would avoid tolls and take local roads. 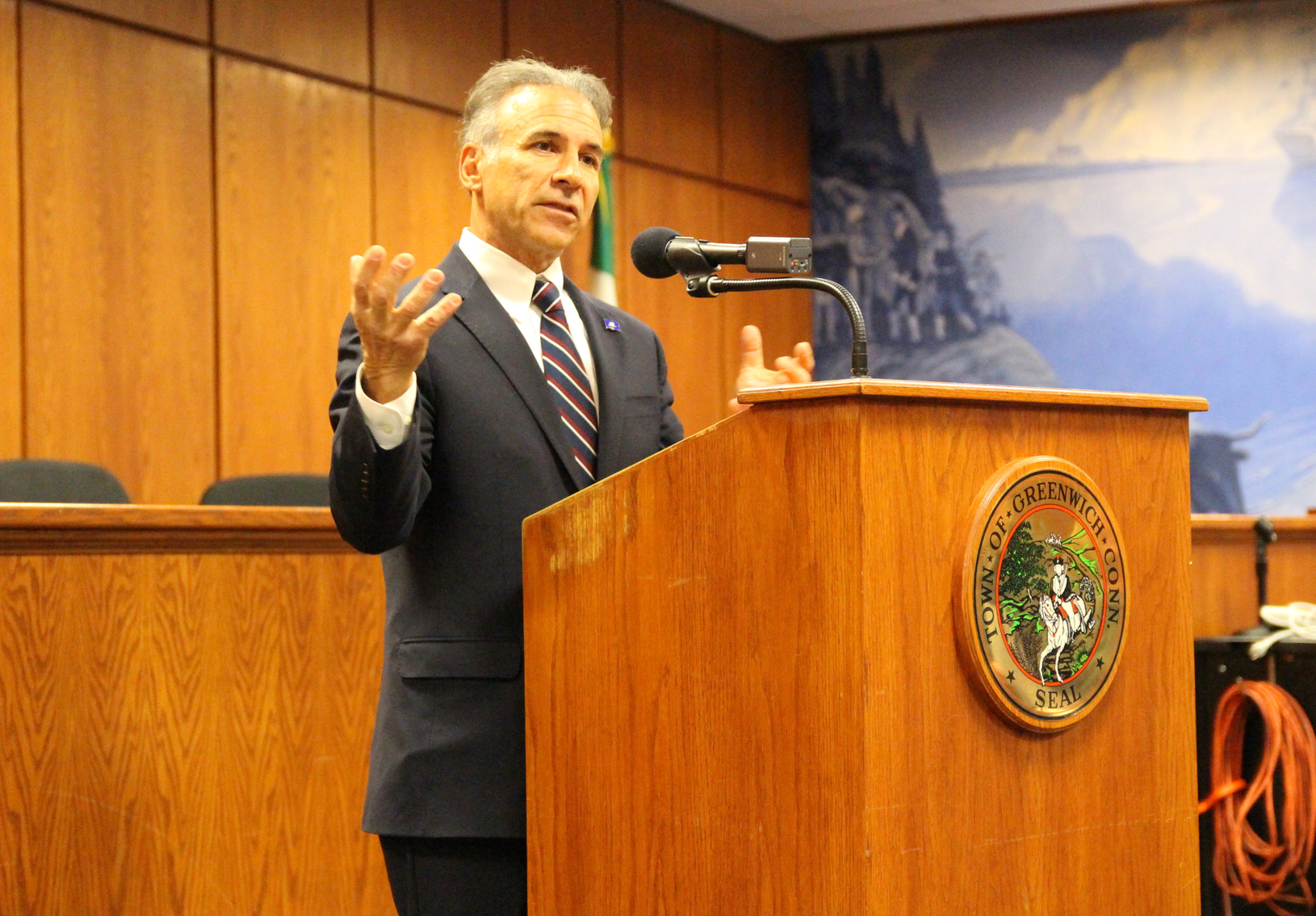 State Rep Fred Camillo (R-151), who recently announced he seeks the nomination of Republicans to be their candidate for First Selectman, argued in favor of the resolution against tolls. April 1, 2019 Photo: Leslie Yager

State Rep (R-151) Fred Camillo said Massachusetts has a hard time collecting toll payments from out-of-state drivers who do not have transponders (E-ZPass).

Camillo said golf passes and a beach cards are both examples of user fees because residents have a choice as to whether to purchase them, but tolls are another story.

“We have the money there and have been diverting it every single year,” Camillo said of the Special Transportation Fund. “We voted for a lock box. It goes into effect July 1….There is money there, and there are other ways to do this. Keep the weigh stations open. They’re never open. Let’s give it a chance to let the lock box on the special transportation fund work.” 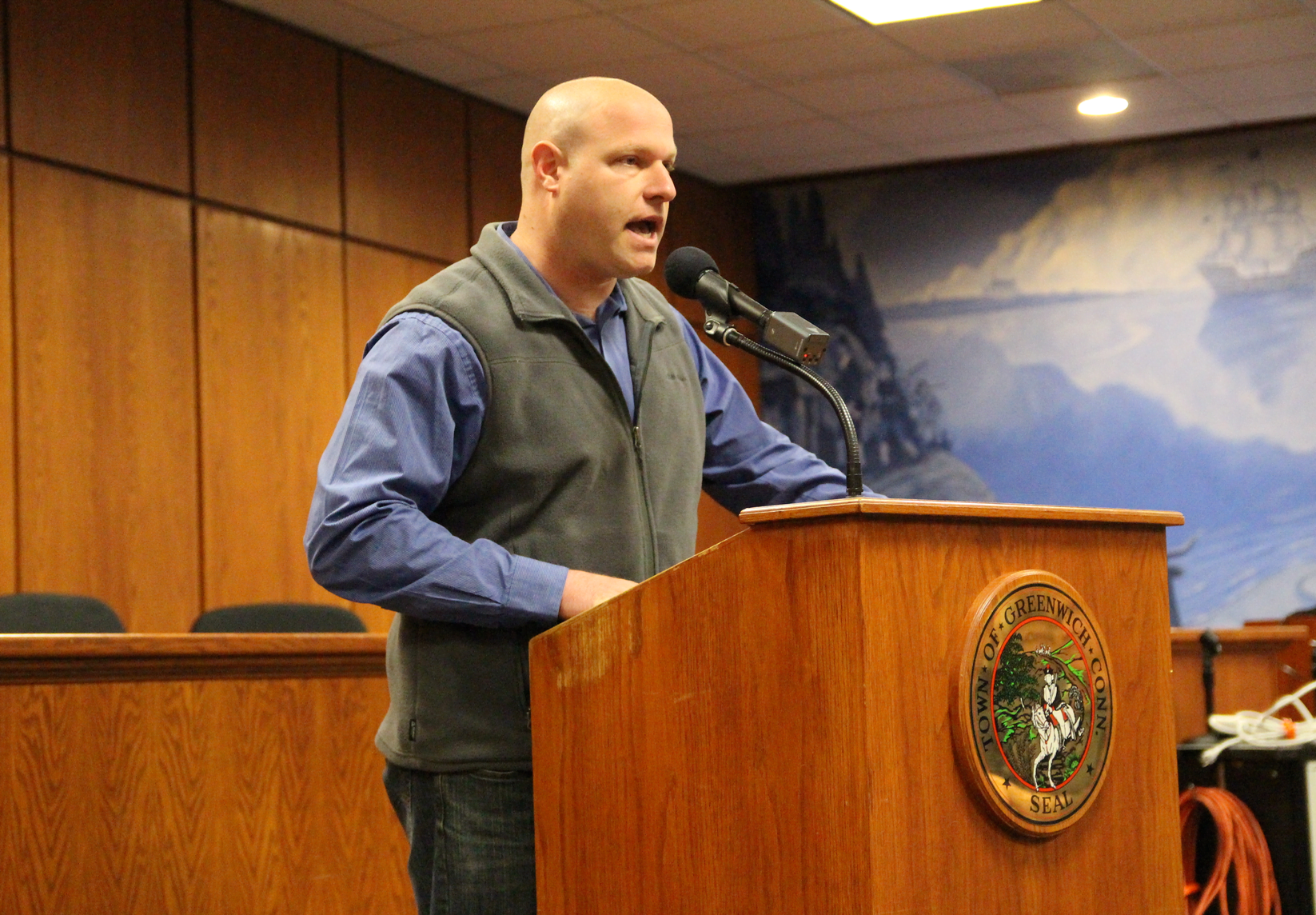 Patrick Sasser, a career firefighter in Stamford who owns a small excavating business, is the founder of NoTollsCT.

Sasser faulted Governor Lamont for running his campaign on a promise to toll trucks only, and changing his mind.

He said Connecticut has the 7th highest gas taxes and that residents already pay their fair share to use the highways.

Sasser said Hartford has mismanaged use of those revenues.

Further, he argued that tolls calibrated to charge more during peak travel times, “congestion pricing,” will force vehicles off highways and onto local roads.

“Forcing them off will double or triple the traffic in cities and towns,” Sasser said, adding that not all business owners will be in a position to pass the cost of tolls onto their customers. 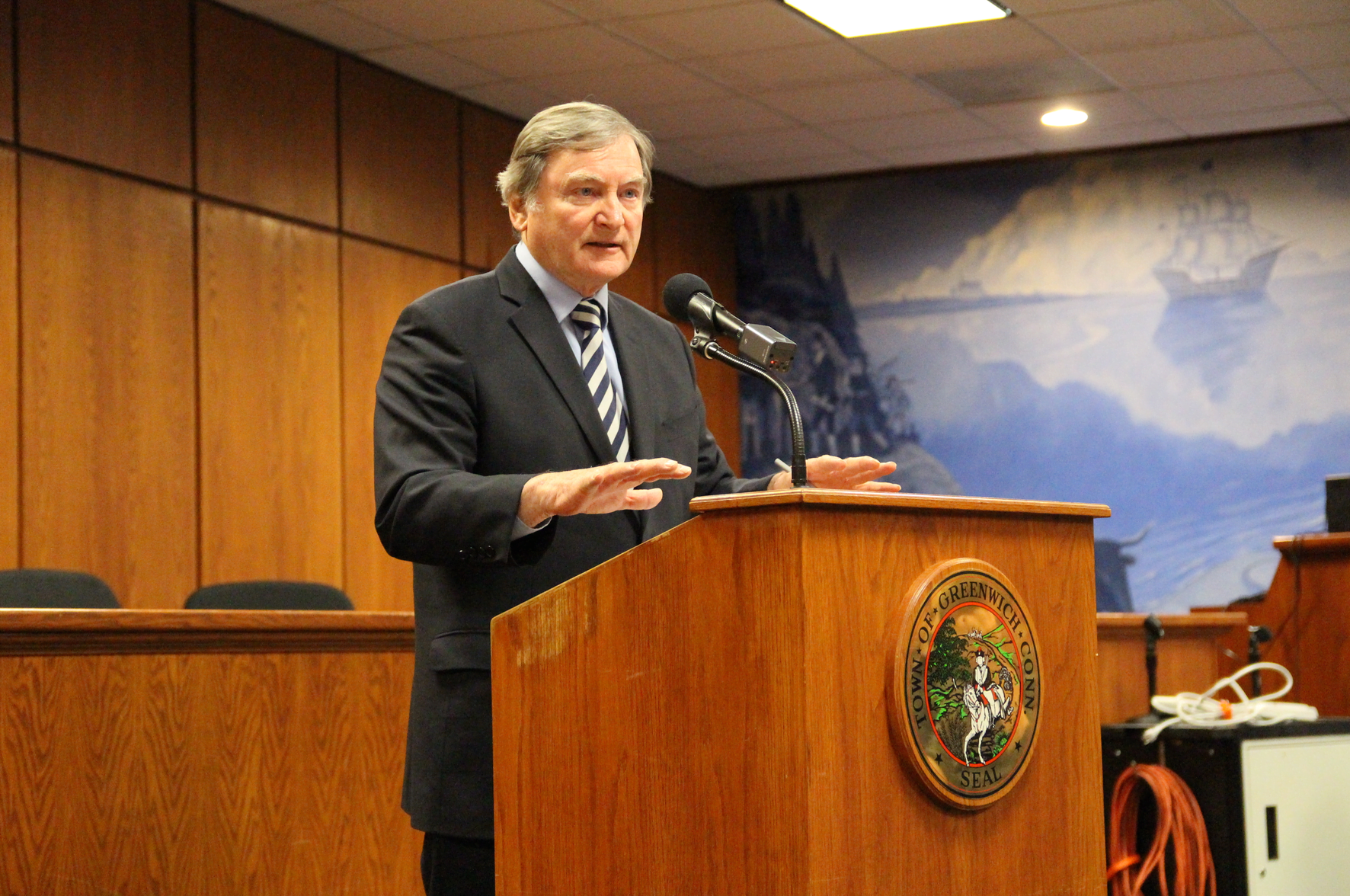 Joseph McGee, Vice President, Public Policy and Programs for the Business Council of Fairfield County spoke against the anti-toll resolution and in favor of tolls. April 1, 2019 Photo: Leslie Yager

Joseph McGee, from the Business Council of Fairfield County, an organization he said has opposed tolls in the past, rebutted Mr. Sasser, saying Connecticut’s need to upgrade transportation infrastructure is urgent.

“We went through this when Ella Grasso was Governor and the Mianus Bridge fell. You’d think we learned a lesson from that, but we haven’t.”– Joseph  McGee, Business Council of Fairfield County

“We’re the business organization that led the fight against tolls 30 years ago,” McGee said. “We’ve shifted our position….We need to invest in transportation. Whether it’s a user fund or a tax is almost immaterial. We need to plan for the future. A confident people invest in their future.”

“If you want to go to bond using general funds that go into operating – this state has put everything on the state’s credit card. You have to give Governor Lamont some credit for putting the state on a ‘debt diet.’ Bonded debt comes out of your pocket as taxpayers.”

He said the choice is between raising the gas tax or taking sales tax revenue and diverting the funds to transportation.

McGee said his organization is comprised of member companies with a total of 35,000 to 40,000 employees.

“Our organization is for investment in infrastructure. Why? If you look at economic growth, Connecticut is one of the slowest growing states in the nation. Only Wyoming and North Dakota have been slower over a 10 year period.”

“During the recession our companies had hundreds of jobs that could not be filled, and one of the key issues in Connecticut is transportation infrastructure. Our highways and rail system are not in good repair,” McGee said, adding that the cost of congestion is $1,200 per year, per person in increased fuel costs and lost time. “Our congestion on I-95 is one of the highest ratios of lost hours – 50 hours a year of people being late to work.”

“On the railroad system, there are four bridges that are 100 years old,” McGee said. “Last summer the bridges had to be manually closed because they froze in place from the heat. This is not acceptable on the New Haven line which is the main line between new Haven and Boston.”

“These bridges need to be replaced and are a billion dollars each,” McGee said.

McGee said that in Hartford the entire I-84 viaduct, which is essentially a bridge, needs to be replaced, which will cost billions of dollars.

“You use a pricing mechanism to get trucks that don’t need to be there out,” he said.

During Q&A, Don Conway asked, “How you guarantee this money collecting at the tolls is actually going into that lock box?”

“When you do tolling – these are federal highways – you have to negotiate a contract with the Federal Highway Administration,” McGee said. “Forget the lock box. The contract with the FHA is ironclad. The money raised from tolls goes only to highways or congestion mitigation.” 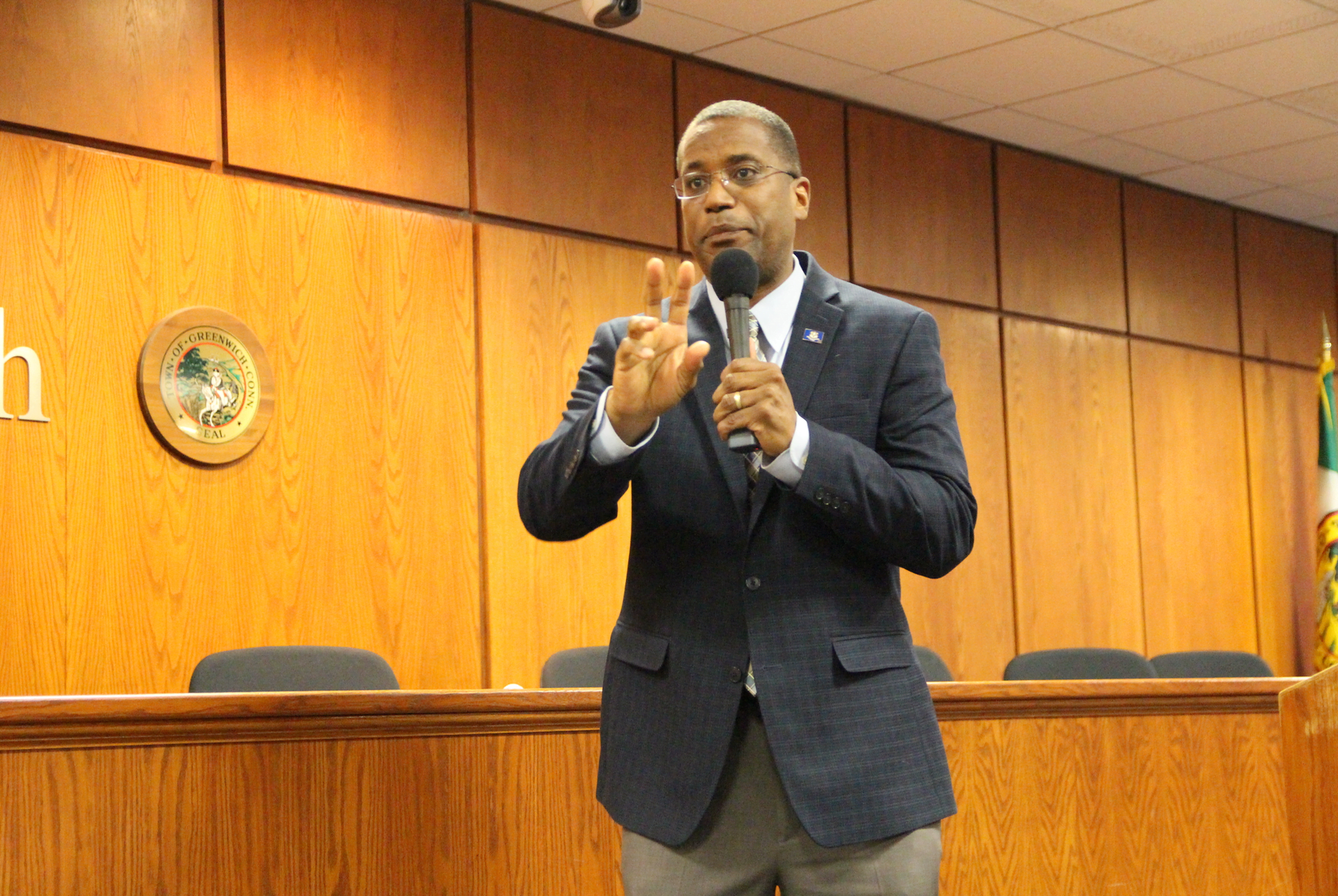 State Senator George Logan (R-17) was asked what happened to the $650 million diverted from the Special Transportation Fund.

“We have a Special Transportation Fund that is currently fully funded for four yeas. With tolling in Connecticut you wouldn’t see valid revenue for at least 5 years. …We are paying millions that go to Hartford. Why aren’t those transportation dollars being spent in Fairfield County? There is nothing in the mindset of the legislators in Hartford. They haven’t been using transportation funding to fix the roads and bridges in Fairfield County, and I’d argue that would continue with tolls.”

“We have to have a fact-based conversation,” Mr. McGee replied. “We have a state budget that is audited. We know what we spend on transportation every year. We are spending a $1.2 billion on transportation projects every year. It’s not that we’re diverting it all. We’ve diverted some, but the bulk is spent on transportation. It’s just not enough money to repair an aging highway system.” 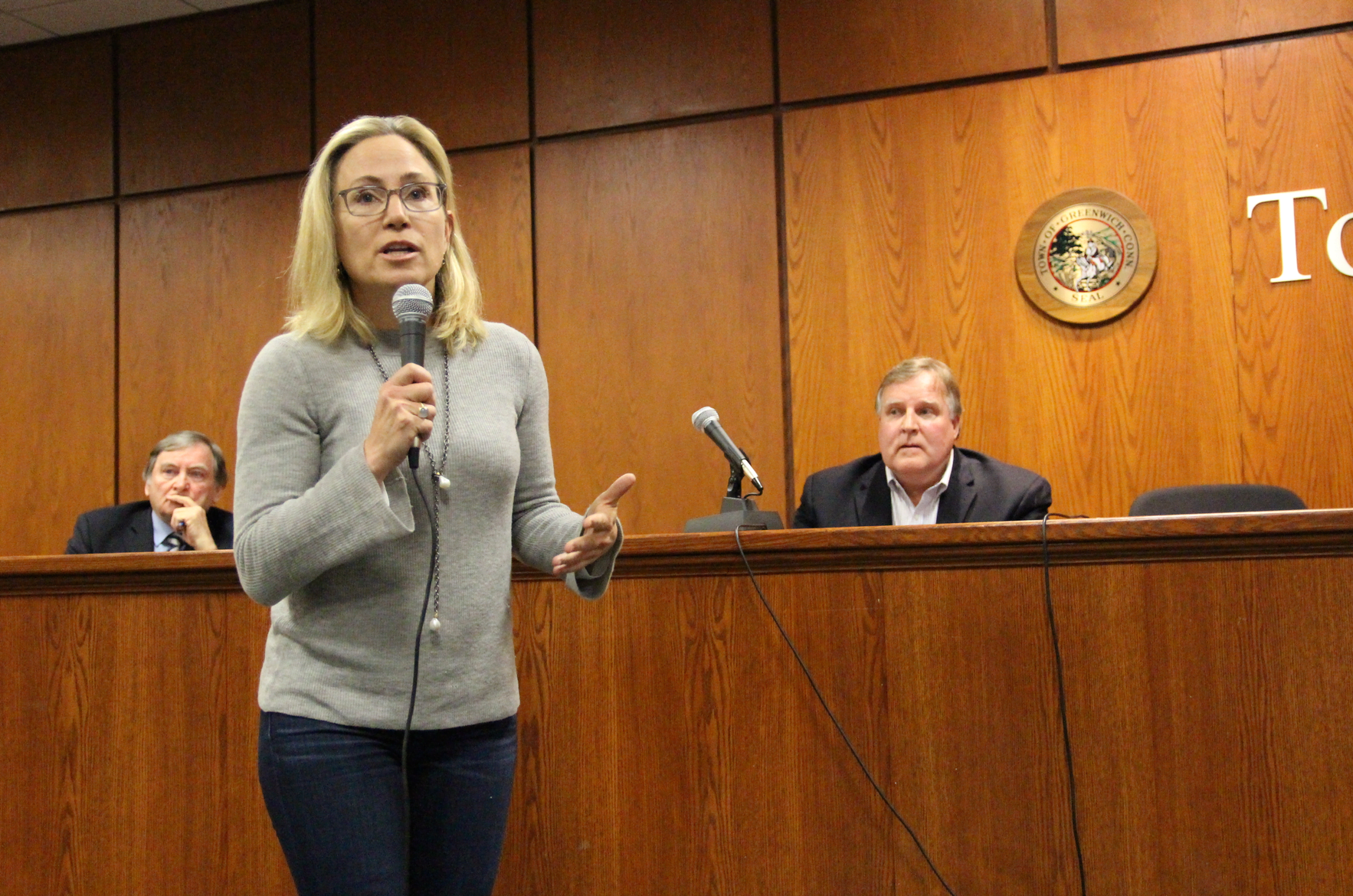 State Senator Alex Bergstein, vice chair of the transportation committee, said the problem is 40 years in the making.

“As my colleague Senator Logan pointed out, you’re not going to get results in two years. Politicians in the legislature are on a two-year campaign cycle. They want you to vote for them in two yeas. This is not politically expedient. It’s the responsible solution to something that took 40 years to accumulate. We’re sending a positive signal to the market by going on a debt diet, and a positive signal to the business community.”

“The cost of not doing tolls will be even higher,” she continued. “If we don’t put in a new source of revenue that may be even be more than 50% paid for by out-of-state drivers, and invest in infrastructure transformation, we are not going to be able to grow our economy and attract new economies here.”

“We keep having magical numbers about out-of-staters,” Sasser said. “First it was 30%, then 40%, and now the Governor is saying 50%. They are using numbers that fit their narrative, that fit their awful plan, that will effect the working class, the working poor of the state.”

“There is no silver bullet or magical source of funding,” Bergstein said. “The fact is, we don’t have the funding for the major upgrades that are needed. I fully agree that projects need to be run more efficiently and the costs of projects in Connecticut are too high.”

Bergstein also said costs need to come down and there needs to be greater accountability for how tax dollars are spent.

“There is no question that public funds have been mismanaged in the past,” she said. “I want to change that. We need to come together and support responsible long term solutions to these complex problems.”

The resolution next goes before the entire RTM on April 8.