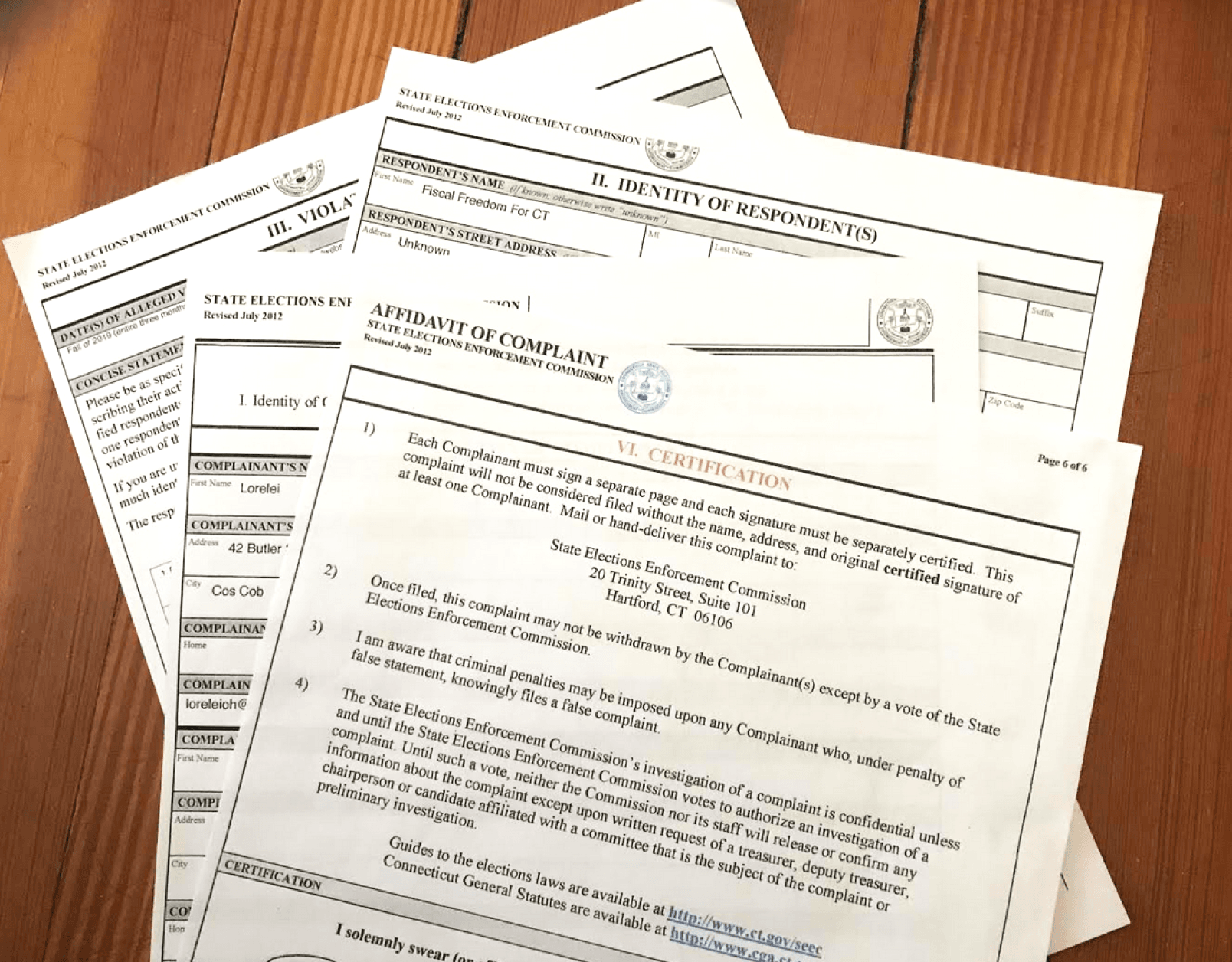 Casting a cloud over the 2019 campaign were SEEC investigations of Republican complaints stemming back to 2017, resulting in then BET Democratic candidates being fined for violations, including a $52,000 fine against Tony Turner. Turner has always insisted he did everything the SEEC had told him to do.

“I did everything possible to prevent exactly the situation that happened but couldn’t fight it anymore due to the legal costs,” Turner said.

In September 2019 the BET voted 7-5 to form a sub-committee to investigate the BET Democrats even though the SEEC had completed their investigation. Democrat Tony Turner voted with the six Republicans to form the subcommittee.

Republicans BET candidates seized on the violations during their campaigns, but after the November 2019 election, the board voted on Dec 16 not to proceed with the sub-committee, and instead ask the RTC and DTC to offer more training for candidates.

The SEEC has voted to authorize another investigation.

The SEEC agreed on December 18, 2019 to conduct an investigation.

O’Hagan was an incumbent RTM member in District 2 who failed to win re-election.

In the Nov 5, 2019 election Gladstone and DelGuercio were candidates for RTM in District 2, Salib in District 11, and Fiorello in District 7.

Candidates are allowed to make expenditures only for their own campaigns, unless a committee is formed and registered with the state.

“The complaint is really simple. It’s you can’t just spend money trying to get someone elected or not elected if you coordinate with the candidate and don’t report it as a contribution.” – Lorelei O’Hagan, complainant

O’Hagan’s complaint asserts that the Fiscal Freedom’s expenditures on campaign materials including a “scorecard” and postcard mailing were impermissible, that there was a lack of proper attribution, that Fiscal Freedom never registered with the SEEC as required. Also that Fiscal Freedom included members who happened to be candidates for RTM, violating state election laws by coordinating expenditures.

The complaint notes the “scorecard” was published on the Fiscal Freedom’s website and on a postcard mailed to at least one RTM District: District 2.

Fiscal Freedom’s website says its scorecard methodology is based on a handful of RTM votes:

“If you voted for Mareta Hamre, who was recommended by the appointments committee for the RTM Labor Contracts Commission of the RTM, you did not reflect Fiscal Freedom’s values,” O’Hagan said. “She’s a Berkeley trained lawyer, but if you voted for her you got a negative rating. It’s not even related to fiscal responsibility.”

“For the first time it became a partisan battle. (On Nov 5), at the polls they pointed at us and said, ‘They are going to raise your taxes.’ The RTM doesn’t even have the power to do that. The BET is in charge of the mill rate. That scared people.” – Mary Ellen Markowitz, District 2 RTM

“Nothing on the score card was related to long term borrowing, wasteful taxes or spending. How does a vote on a nomination correlate to wasteful spending?” – Lorelei O’Hagan, complainant

This week Kristine Lowe who was on the RTM for 2-1/2 years said her understanding had been that the RTM was a non-partisan organization.

“My understanding was that RTM is neighborhood based and comprised of well-intentioned, community-oriented people elected by neighbors who knew them and trusted their judgment.  The Fiscal Freedom website seems to run completely counter to that, with its arbitrary scoring system claiming to rate RTM members’ degree of ‘fiscal responsibility’ based on a narrowly selected set of votes, most of which are unrelated to town fiscal issues,” Lowe said.

Mary Ellen Markowitz, who won another term on the RTM in District 2, but whose husband did not, said, “The methodology is cherry-picked, skewed and didn’t make any sense.”

Markowitz said she was surprised that Doug Wells was not re-elected in District 2. “He was scored low on the scorecard, despite being an extremely valued and revered member of the RTM. That was shocking,” she said. “The fact that they put together a slate and identified themselves as Republicans – that’s never been done.”

Markowitz said she had knocked on hundreds of doors and never identified herself as a Democrat.

“Sometimes people would ask, but we are a non-partisan body,” she said, adding, “Fiscal Freedom up-ended that.”

“As for the SEEC complaint, (Fiscal Freedom) didn’t do their research in terms of being compliant with SEEC. You just can’t get away with breaking the rules.  As Republican State Chair JR Romano said about the investigation of Tony Turner, ‘They didn’t care what the rules are and didn’t care to find out if they were doing things properly,’ Markowitz added. “They are not above the law.”

In addition to the four respondents, other potential respondents are named in the complaint, which asserts they may have coordinated with Fiscal Freedom or benefited from expenditures.

“When I heard the major outrage by the Republicans about the SEEC rulings against Democrats, and the talk about how important it is that rules are followed, I thought, well this is interesting. If they really were outraged about the rules and procedures not being followed, they should be outraged about this.” – Lorelei O’Hagen, complainant

O’Hagan asserts in the complaint the Fiscal Freedom’s materials lacked proper attribution, which is the small print that should read: “Paid for By (name of individual)” or state the name of Treasurer and the committee if the material is from a committee other than a party committee.

Instead the postcard said simply “Paid for By Fiscal Freedom for CT.”

The scorecard on the website, which is still live, says, “Copyright 2018 Fiscal Freedom for Connecticut.”

What is Fiscal Freedom for CT?

This group was originally named Fiscal Femmes for Freedom but changed to Fiscal Freedom for CT in April 2018.

Gladstone said in press interviews at the time that the original name reflected an intention to offer a place to women who might not have felt comfortable participating with March On Greenwich or Indivisible Greenwich.

In April 2018 Gladstone said men wanted to be part of the grassroots group after it came out in opposition of a proposed plastic bag ordinance that included a small charge for paper bags. (The ban ultimately passed at the RTM in March 2018, but without any fee for a paper bag.)

The Fiscal Freedom website has no About Us section, no address, no names, no contact information. O’Hagan said this is why there may be more respondents than the ones who have self identified publicly as part of the organization.

O’Hagan’s complaint says the scorecard used “a multitude of disparate and mischaracterized votes.”

The complaint asserts that Fiscal Freedom worked as a political committee making expenditures to benefit RTM candidates, including their own members, without registering with the SEEC.

And while Fiscal Freedom was initially a haven for women who might not wish to be part of March On Greenwich or Indivisible, O’Hagan pointed out that the difference between Fiscal Freedom and those groups is that neither March On, nor Indivisible Greenwich spent money promoting candidates.

A complaint lodged by Republican party chair JR Romano charging that Indivisible had done so was dismissed by the SEEC.

“The issue of the scorecard was raised at the RTM long before the election. Then very close to the election, the first post cards arrived in mailboxes,” O’Hagan said.

“It’s misleading and full of half truths. It’s difficult to understand, and there is an improper methodology. If we were being scored and graded, we wanted to understand how and why,” she added.

O’Hagan said it doesn’t matter that Gladstone was not ranked on the scorecard. She said Gladstone reached out to Wilma Nacinovich, Chair of District 2, which is also O’Hagan’s district, and that with Nacinovich’s blessing, her neighbor Pam Schaefer transcribed the data from the scorecard, put it on a spreadsheet and disseminated it to everyone in their neighborhood.

Schaefer’s spreadsheet highlights her choices of candidates in green, including Gladstone and DelGuercio with her 100% score in green. There is no mention of Gladstone’s or DelGuercio’s affiliation with Fiscal Freedom.

“Wilma said, ‘I’m sorry I will only vote for people who are fiscally responsible,'” O’Hagan said. “This is how misinformation is spread.”

O’Hagan said residents of District 2 have a right to know the truth.

“There was a misinformation campaign that had a real life impact on the election. And it was coordinated by current RTM members and this organization,” she said. “They cheated their neighbors and they won.”

Laura Gladstone did not respond to a request for comment.