On Saturday at noon outside Stamford Government Center, a crowd who oppose tolls in Connecticut lined Washington Boulevard holding up protest signs.

Among the crowd were elected officials including State Reps Livvy Floren (R-149) and Fred Camillo (R-151), BET member Karen Fassuliotis, and BOE member Peter Sherr who was out on the center median on Washington Street with a No Tolls sign and pieces of yellow tape spelling out “no tolls” on the back of his coat. 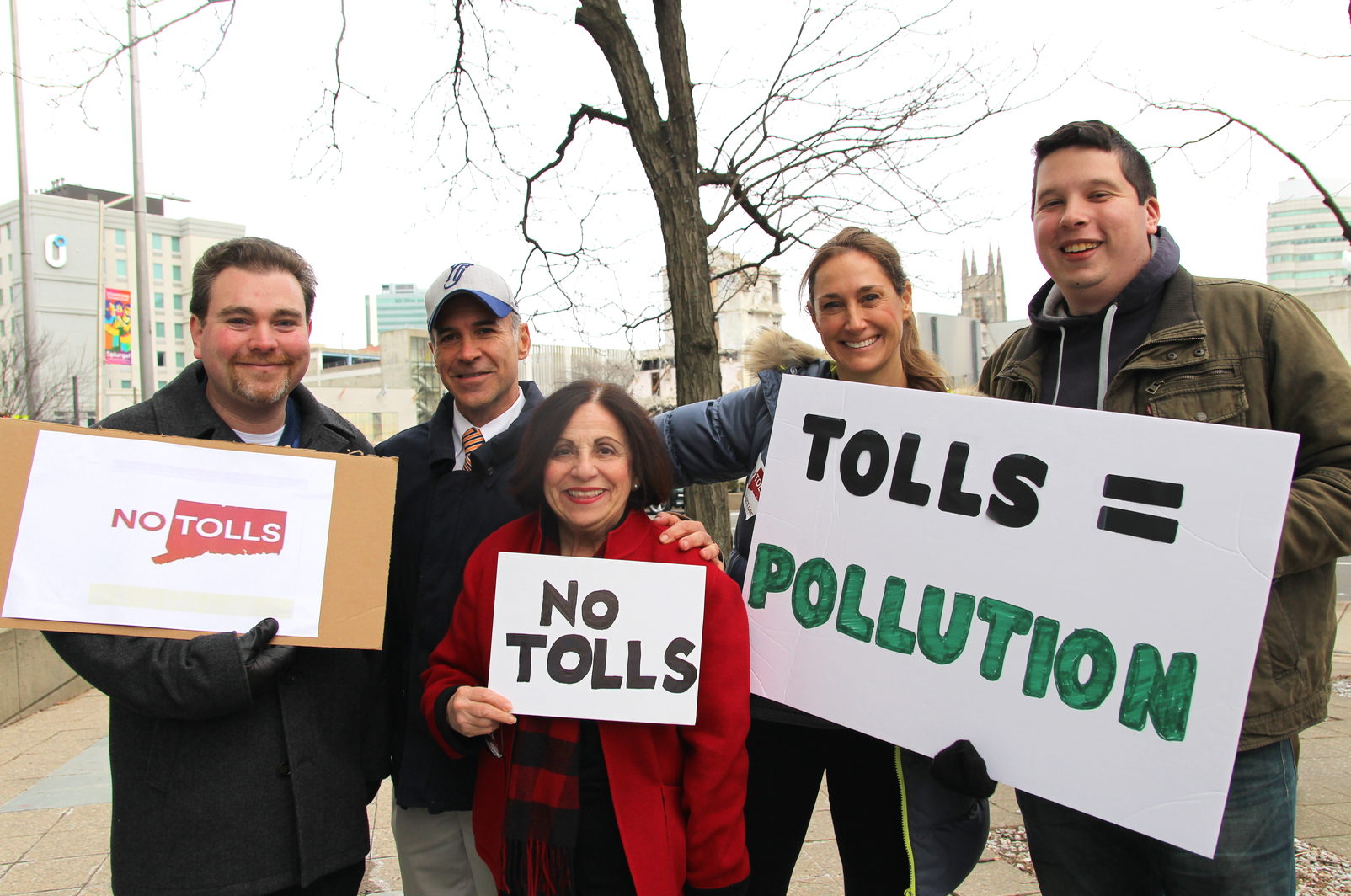 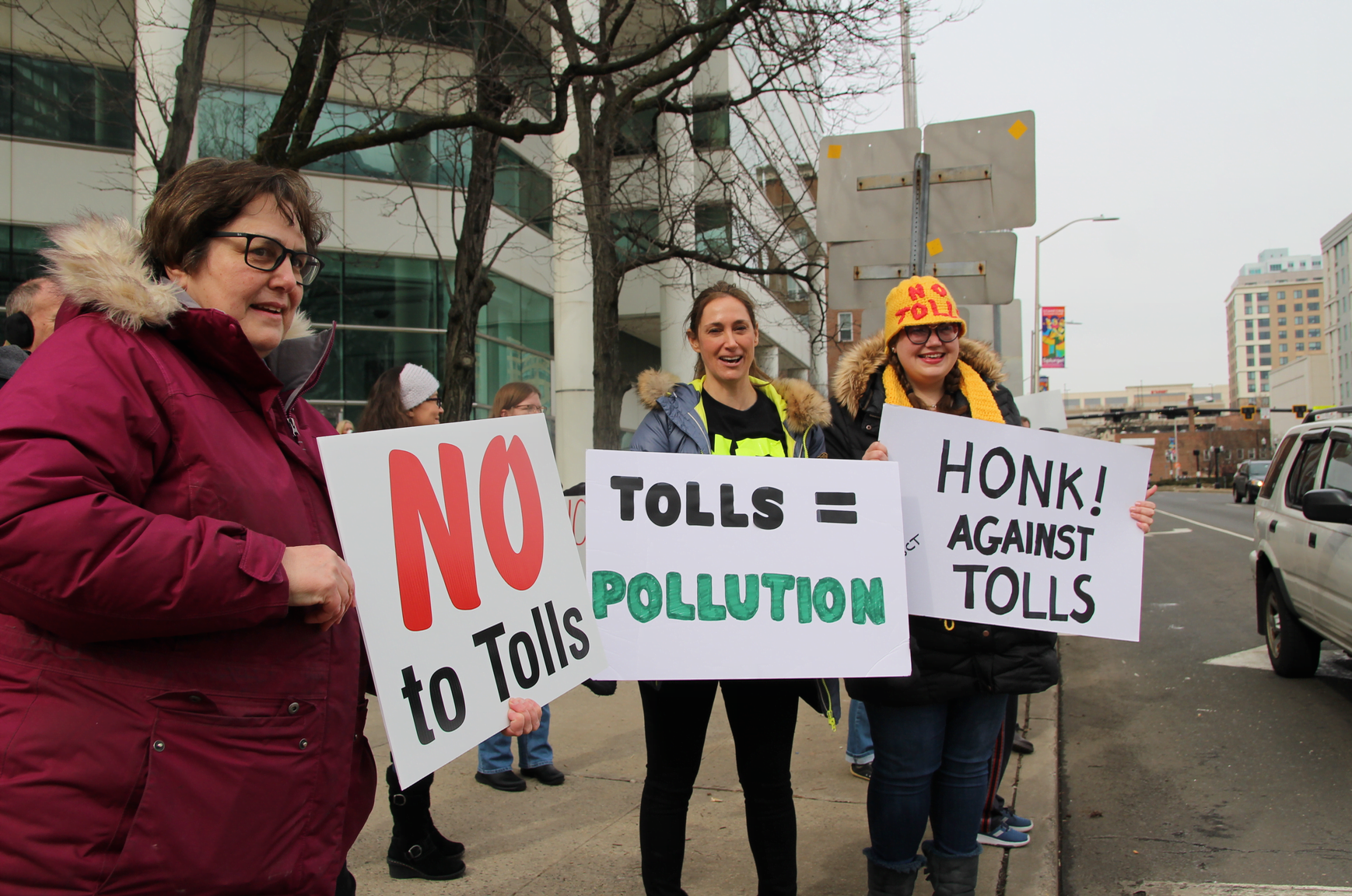 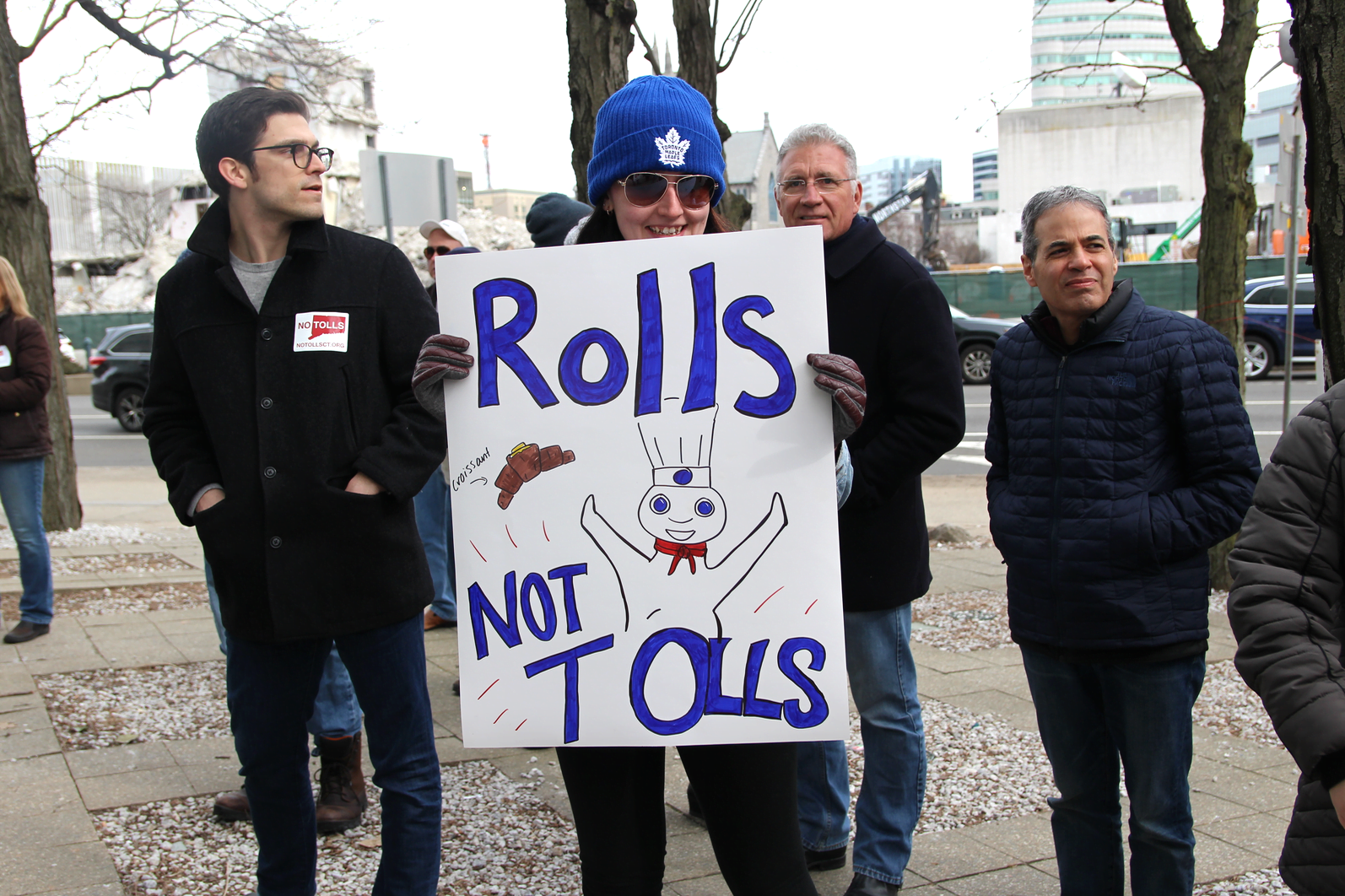 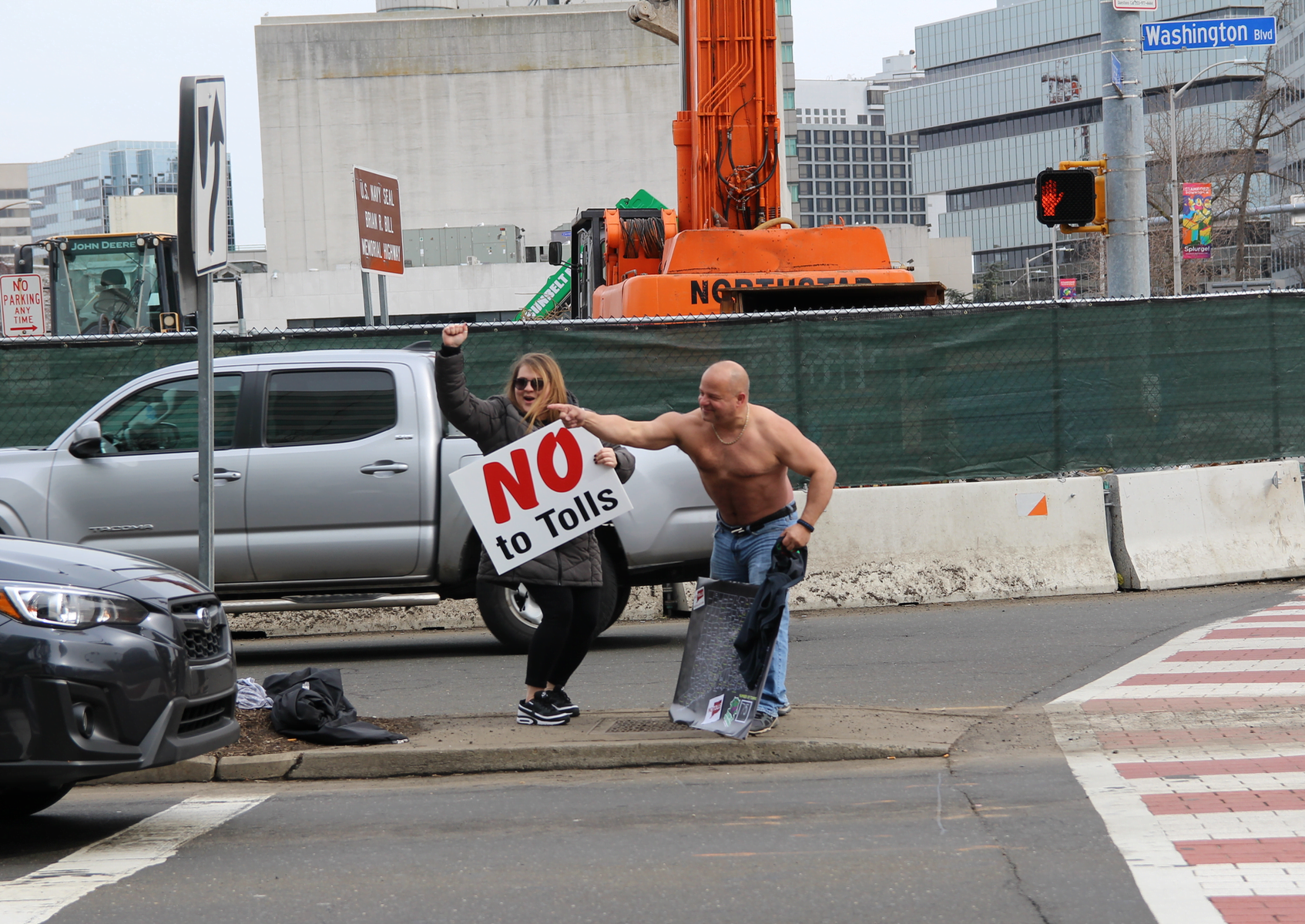 On the median along Washington Boulevard opposite Stamford Government Center, protesters against tolls in Connecticut were passionate on Saturday, Feb 23, 2019 Photo: Leslie Yager

Also present was Republican Bob Stefanowski who lost his race for Governor of Connecticut against Ned Lamont last November, and former State Senator from the 26th district Toni Boucher who lost her seat to Democratic newcomer Will Haskell.

Mr. Sasser, a founder of NoTollsCT, who runs a small excavating business and owns two dump trucks with his brothers, said he was pleased with the turnout, which numbered over 100.

“It’s cold out and people are out here anyway,” Sasser said.

At times the honking horns were deafening as passionate anti-toll protesters with ‘No to Tolls’ signs and handmade posters waved to cars and trucks.

Sasser said he fears negative effects of tolls on small businesses like his if tolls are  introduced.

In his remarks to the crowd, Sasser said a movement is growing throughout the state.

“We’ve become more organized. We have the attention of our lawmakers, and the governor. They’re finally listening to us and they hear us, because of people like you getting on the website and signing petitions,” he said.

Sasser said State Senator Alexandra Bergstein was quoted in the Hartford Courant saying, “‘I know the majority of my constituency in my district favor tolls. They are sophisticated, intelligent and understand the cost of not having tolls,'” Sasser said. “I want to thank all of you unintelligent, unsophisticated people like me.”

“We’re deplorable,” someone in the crowd shouted.

“Alex is going around and talking to people and speaks to the media and says everyone she talks to wants tolls,” Sasser continued. “But I just heard 2,000 cars go by honking their horns supporting what we’re doing.”

“The study last year called for 82 tolls. The Governor now says 53 tolls. I say zero tolls,” Sasser added, to another round of applause. “We went up to Hartford the other day. We sat down with his chief of staff two hours before he delivered his budget, and we made it very clear to him, this is what we’re going to settle for,” he said, holding up his fingers arranged to form a circle. “And the reason why is clear, tolls are another tax.”

State Rep Fred Camillo (R-151) also noted the size of the crowd.  “I ask you to respectfully and politely reach out to anybody you know in the State and ask them to reach out to their state reps and state senators tell them that it’s not unsophisticated and unintelligent to be against tolls. But rather it is sophisticated and intelligent to address the fact that we spend $100,000 per mile on administrative costs on transportation issues in Connecticut. The national number is $9,600. It’s 9-1/2 times the national average. Wouldn’t you fix that problem first?”

Camillo said that tolls won’t just impact residents in their travels; the businesses impacted will pass the cost of their tolls on to customers. 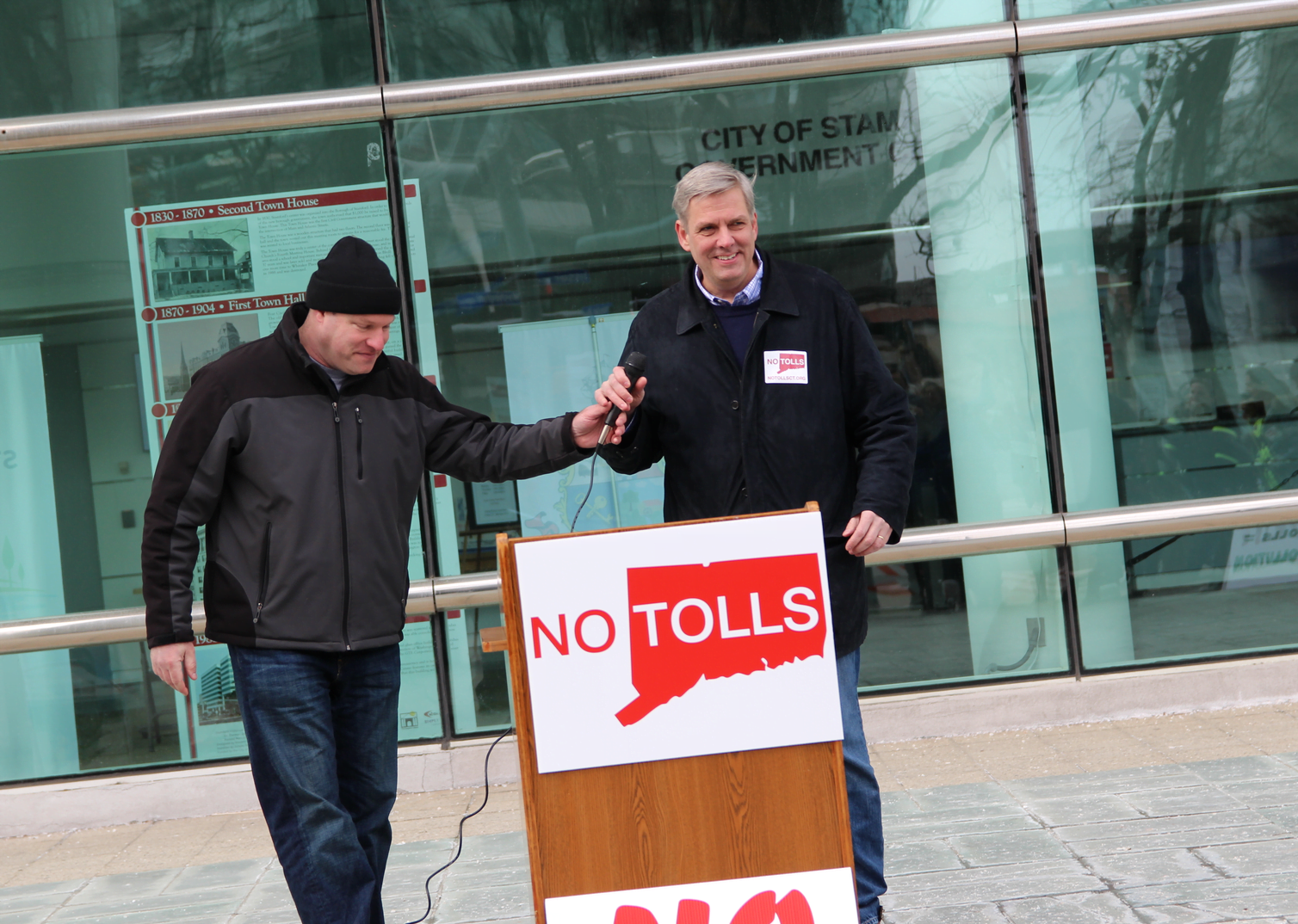 Bob Stefanowski spoke out against tolls at the rally at Stamford Government Center on Feb 23, 2019 Photo: Leslie Yager

“Thirty-eight days,” said Republican Bob Stefanowski who lost the election for governor to Ned Lamont last November. “It only took our new governor 38 days to break his most fundamental promise of the entire election. How many times did he say he was only going to tax tractor trailers? How many times did he say we only need to raise $200 million of revenue from tolls? Now he wants to raise $800 million by taxing and tolling every car on the highway,” Stefanowski continued, adding that on Twitter, “One of the liberal columnists up in Hartford Tweeted, ‘Bob it’s time for you to just go away.’ But I’m not going away.” 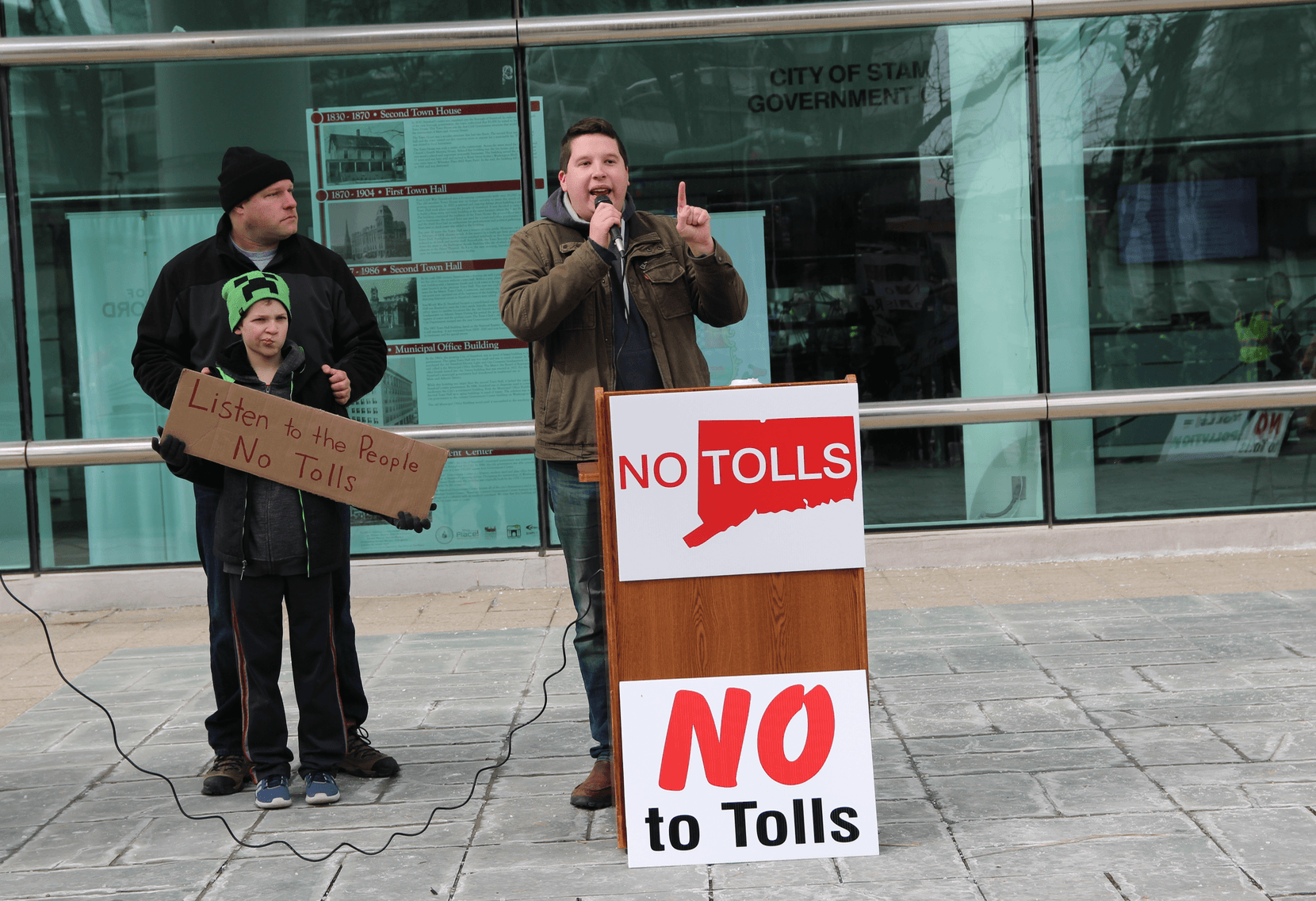 Steve Kolenberg, who is the chair of the Transportation Committee on the Stamford Board of Representatives delivered remarks outside Stamford Government Center on Feb 23, 2019 Photo: Leslie Yager

Steve Kolenberg, who is the chair of the Transportation Committee on the Stamford Board of Representatives said that on Thursday, said he was a co sponsor of an original anti-toll resolution.

“I was joined in co sponsoring that by folks from all over the spectrum – Republicans, Democrats – all with one thing in common – we are totally and completely opposed to tolls in this state,” he said.

“The folks in Hartford, those thugs up in Hartford they don’t want to make this happen. They want tolls to be a partisan issue,” he said.

Kolenberg said that the anti toll resolution that made it through his transportation committee did so unanimously.

“This resolution is going to put our state legislators on notice,” he said. “It sends a very clear message to them. Stand up for us. Ignore Joe Aresimowi, ignore Martin Looney, ignore Ned Lamont.” 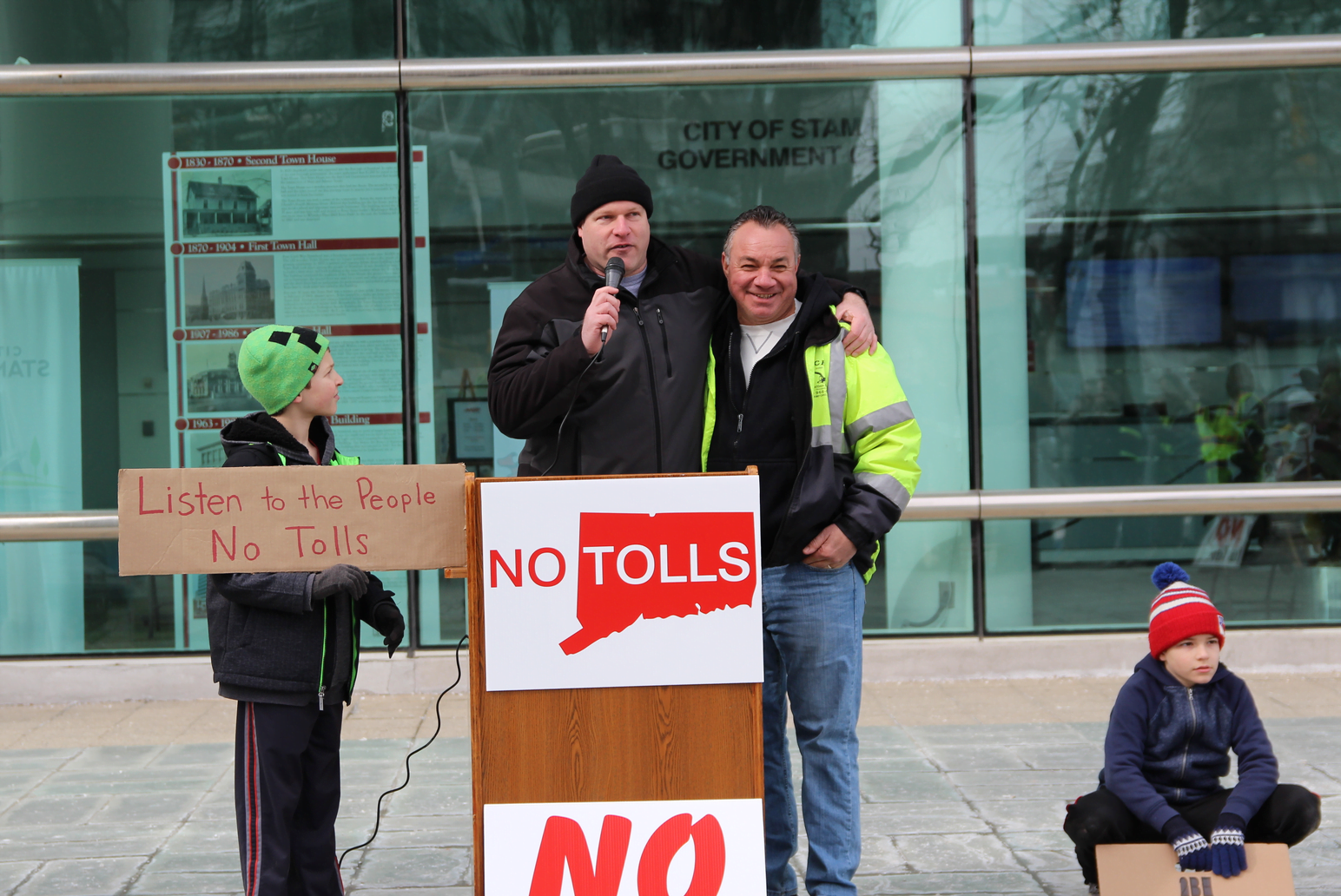 Robert Katchco, a small business owner in Stamford, said, “Studies show that families will pay on average $1,500 per year because of these tolls. So far I haven’t heard anything about cuts from the limousine liberals. Senator Bergstein made the comment that tolls will bring businesses to Connecticut. I’m not really sure how that works.”

“As a small business, they’re just crushing us,” Katchco continued. “They keep putting us in the vise and soon they’ll keep squeezing til there’s nobody left in Connecticut. Amazon won’t come here. We’re number 49 of the worse states to do business.”

Christopher Semmes of Greenwich pointed out that further south on I95 there is one toll heading in New Rochelle (heading north). “Other than that, the tolls are for bridges – Whitestone, Thogs Neck and Triborough,” he said.

Semmes suggested alternatives to tolls that would raise revenue for Connecticut. “The weigh station by exit 2 should be open more often. It should be returned to the control of State Police,” he said. “Also, there should be a tax on any money leaving the country through a transfer service like Western Union.”

At the end of the rally, Mr. Sasser asked the crowd to continue the effort and in particular to sign the petition on the NoTollsCT website, so that he could deliver boxes and boxes of signatures to Hartford. 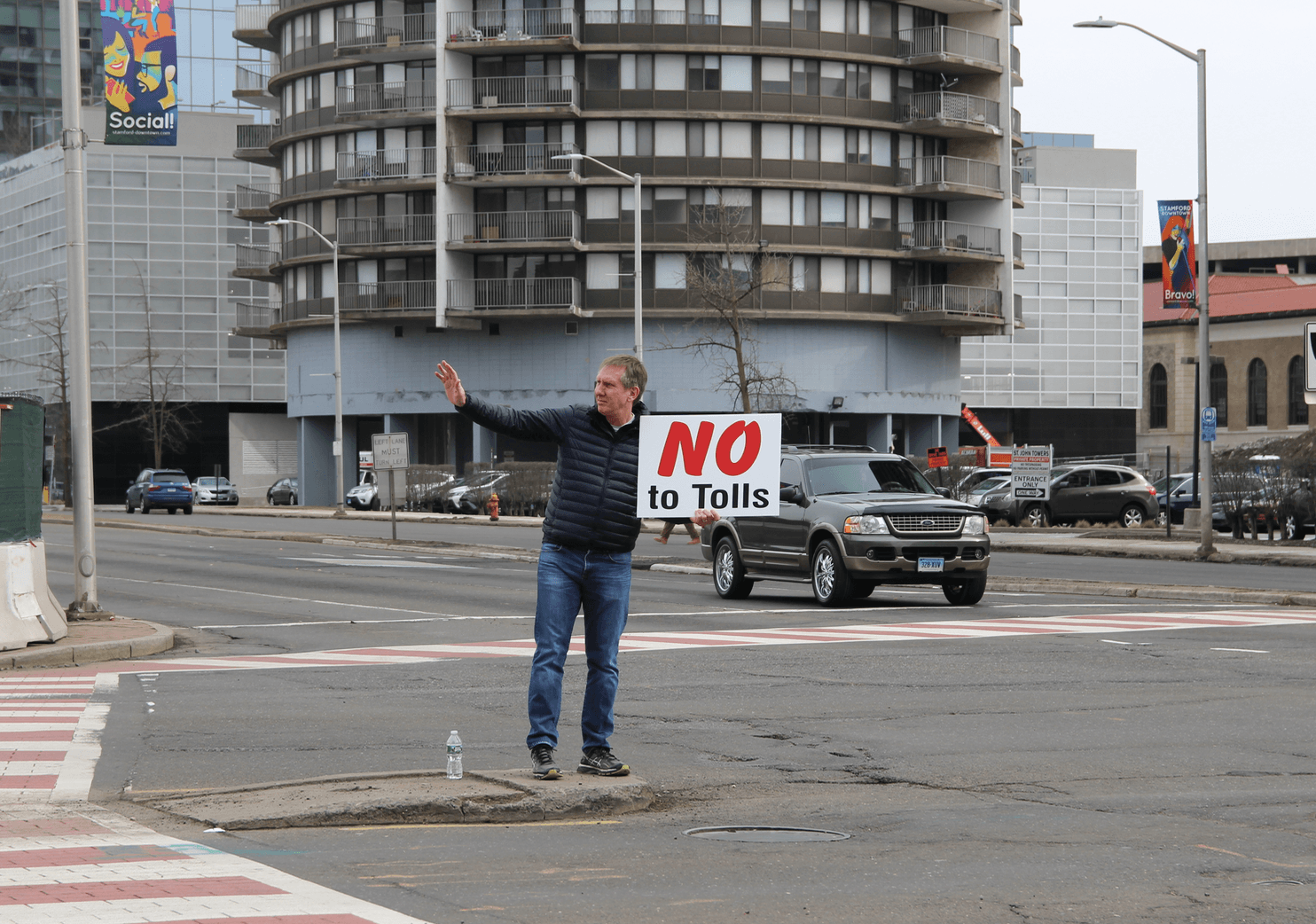 Greenwich Board of Education member, Republican Peter Sherr in the median along Washington Boulevard opposite Stamford Government Center for the anti tolls rally. Feb 23, 2019 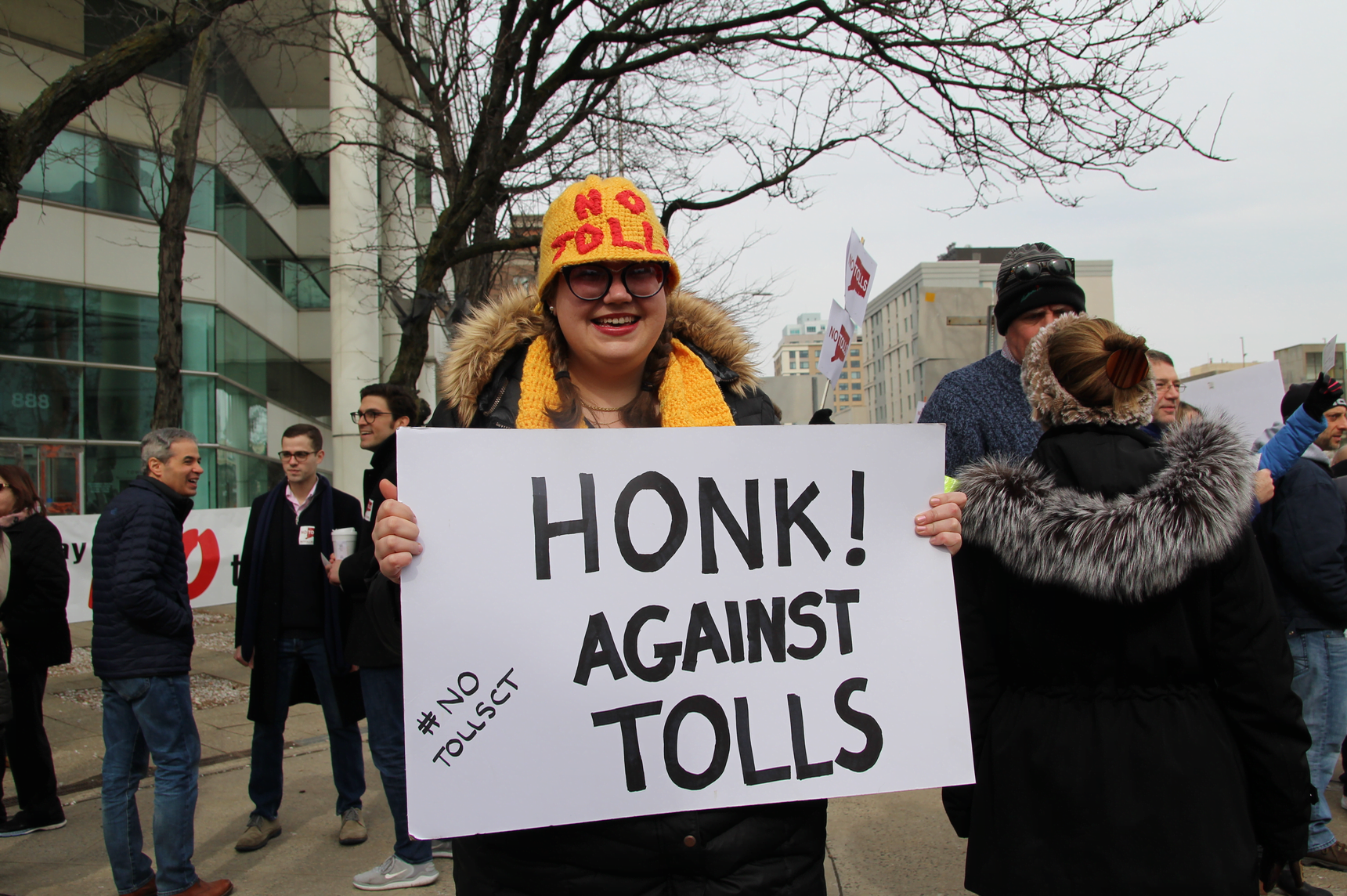 Hillary Gunn with a home made hat and protest sign at the anti-toll rally outside Stamford Government Center on Saturday, Feb 23, 2019 Photo: Leslie Yager 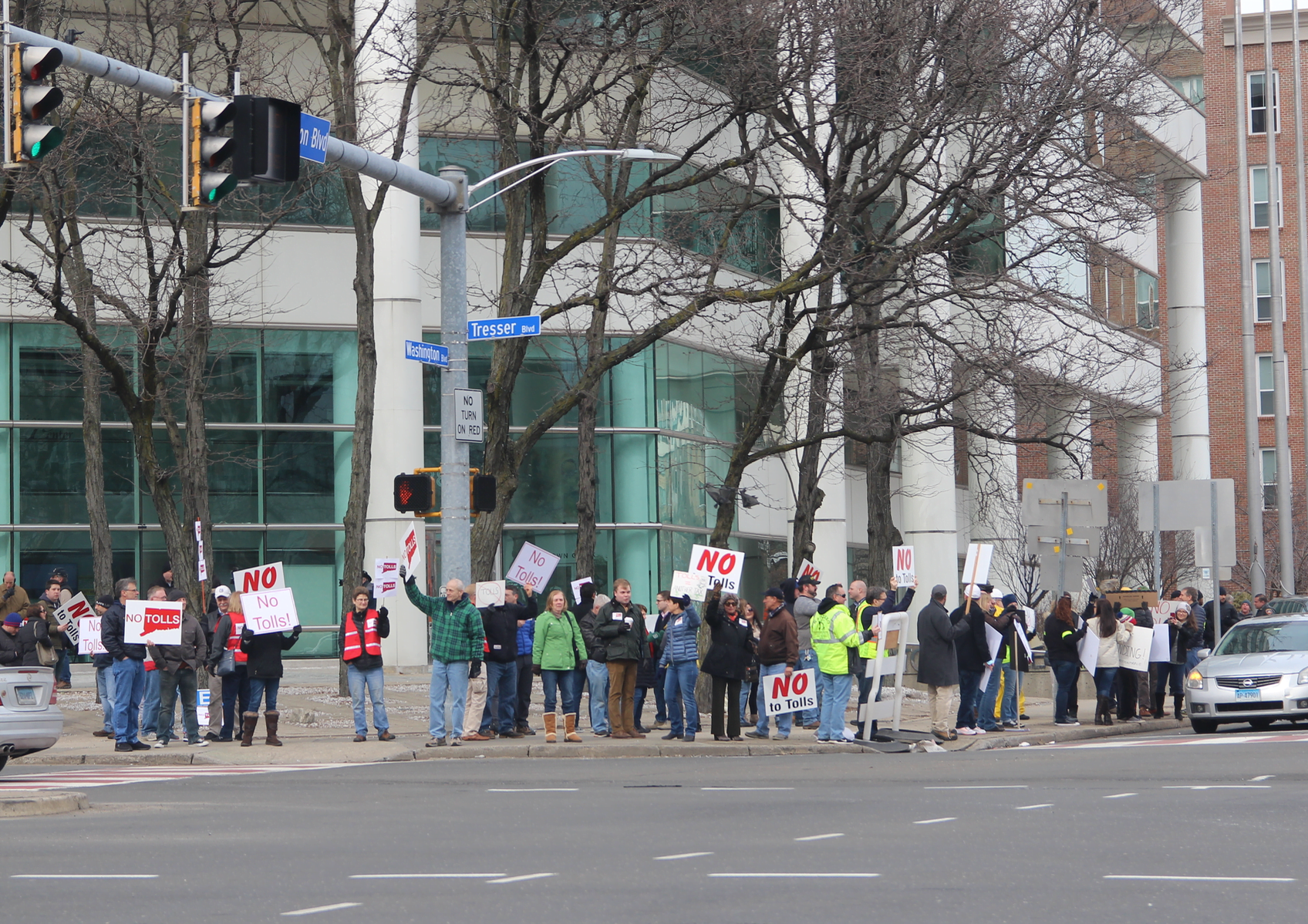