The first ever “Last Taste of Summer” in Roger Sherman Baldwin Park on Saturday was a celebration of both beer and the prospect of sustainability. 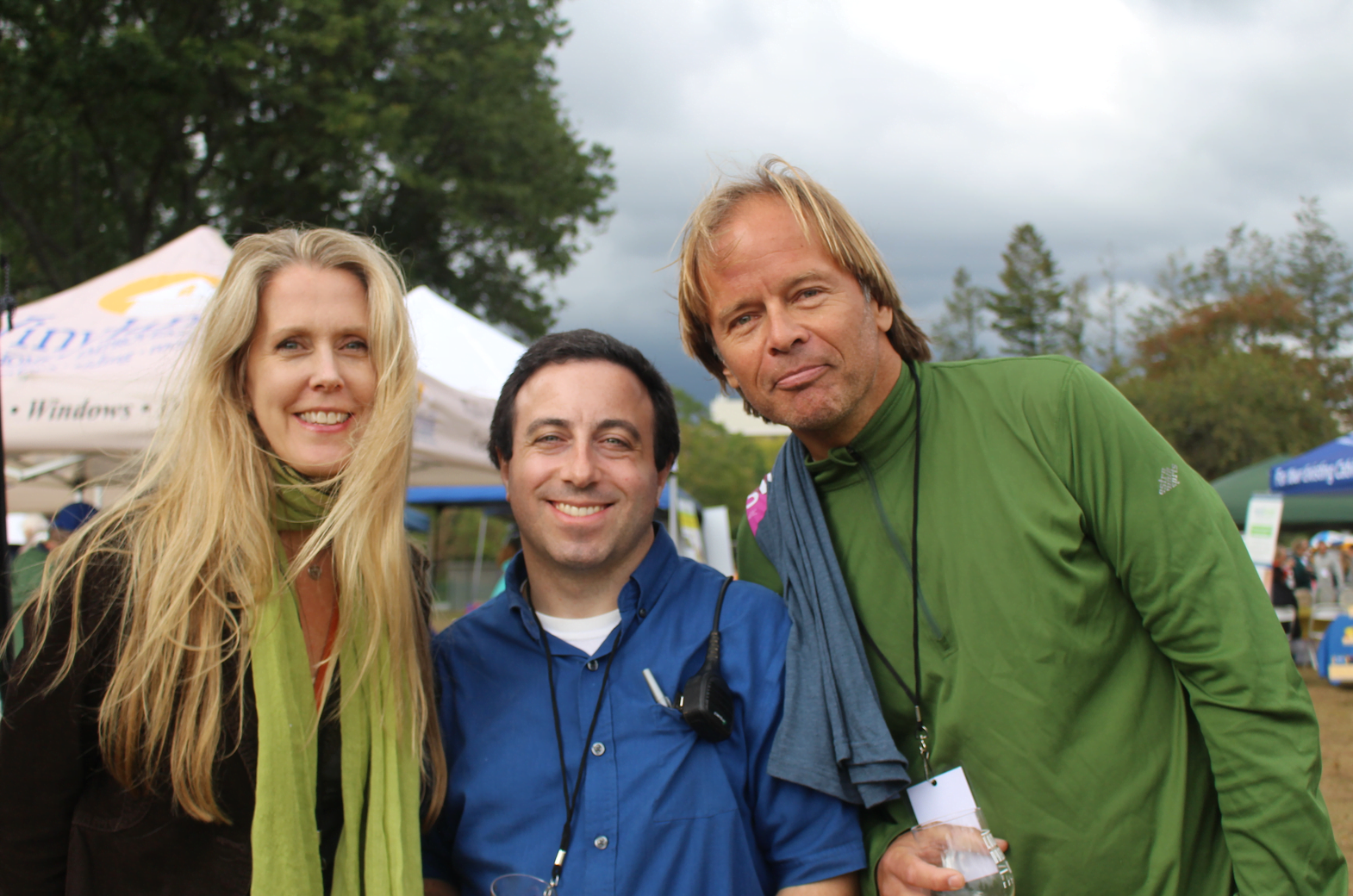 Even organizer Daphne Dixon, with Matt Zeccola and Kevin O’Shea at The Last Taste of Summer, Sept 30, 2017 in Roger Sherman Baldwin Park

With the goal of zero waste for the event, and an array of non profit organizations working toward that end, there was plenty to do and learn between sips.

“I couldn’t be happier with the inflow of the attendees who are enjoying the food trucks and the steel drums, and that makes my day on the Last Taste of Summer,” said organizer Scot Weicker. “And I want to thank Dom Delfino from Joey B’s who did all the cooking for the staff and emergency service workers.”

One of the tables was set up with a display of handmade reusable shopping bags, fashioned from t-shirts by slicing fringe across the bottom and tying it off in simple knots.

The BYOGreenwich, short for bring-your-own, is the mantra of the movement to phase out single use plastic bags.

“Plastic bags are neither compostable nor biodegradable,” said Anne Ogilvy, one of a about a dozen volunteers with the group on Saturday. “The plastic winds up in the trees and in the water.”

Ovilvy said Greenwich is uniquely poised to make a difference because residents embrace their roles as stewards of Long Island Sound.

Ogilvy’s daughter Field, a 7th grader, said she hopes to do her 9th grade Capstone project on the phasing out of plastic bags.

“I’d love it if this becomes something everyone does,” said Mia Murphy, an 8th grader. “It would be great of this helps spread the word,” she added as she showed off a handmade reusable shopping bag made from a pink t-shirt.

“Since it’s in Greenwich at the moment, I’d like to see the idea spread across the country, and then around the world,” said Milli Getz, also in 8th grade.

Hillary McAtee said the volunteers were receiving a positive response at the event. “We’re seeing a groundswell of support for the initiative,” she said.

Ogilvy said the online version of the group’s petition had received over 300 signatures on change.org the previous night, and many more signatures on paper at Saturday’s event.

The petition, which is geared toward the RTM, and has a goal of 500 signatures, seeks a positive vote on the Reusable Checkout Bag Initiative ordinance on Dec 11, 2017, and reads in part, “To protect the environment in Greenwich for the benefit and welfare of its residents by phasing out the use of single-use plastic check out bags, by initiating a 25¢ fee for single-use paper checkout bags and by encouraging the use of reusable checkout bags.”

Among local officials who support the initiative are State Rep Livvy Floren and the Board of Selectmen.

“I’m prepared to say, go forward to take a motion to advance the concept of a reusable bag ordinance in town,” First Selectman Peter Tesei said at the July 6 meeting following a BYOB presentation. In a vote, all three selectmen were in favor.

And although the bring-your-own group did encounter some reluctance from the RTM, there are many RTM members who do embrace the proposed ordinance, including District 8’s John Eddy, whose family’s enthusiasm has led to them making their own reusable bags.

Ogilvy said the argument used by some who resist the phasing out of plastic bags, is that a 25¢ fee for a paper bag would hurt low income residents. Hogwash, she said, since there would also be periodic free bag handouts, and local businesses who might enjoy having their logo on reusable bags would be encouraged to give them away to shoppers. 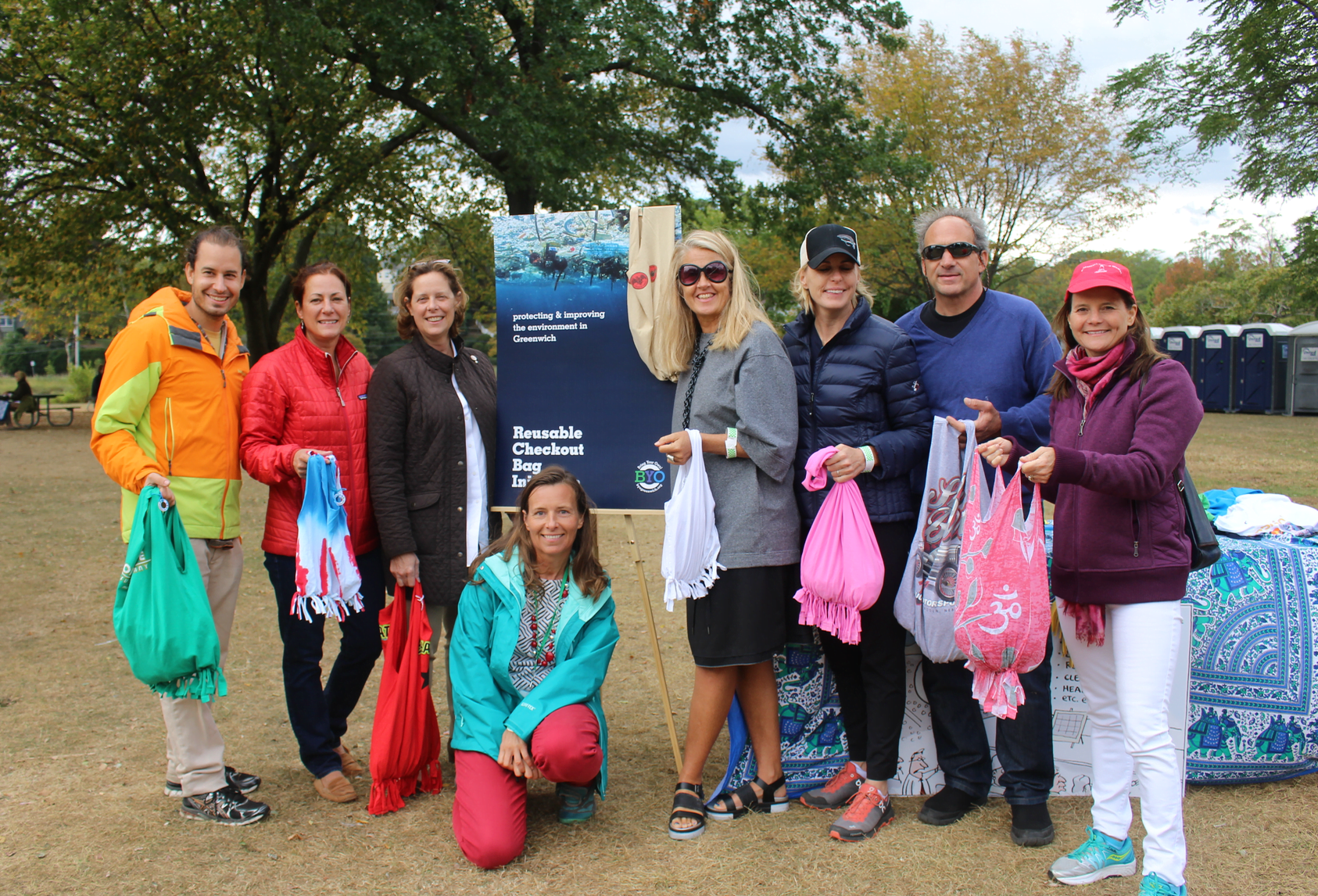 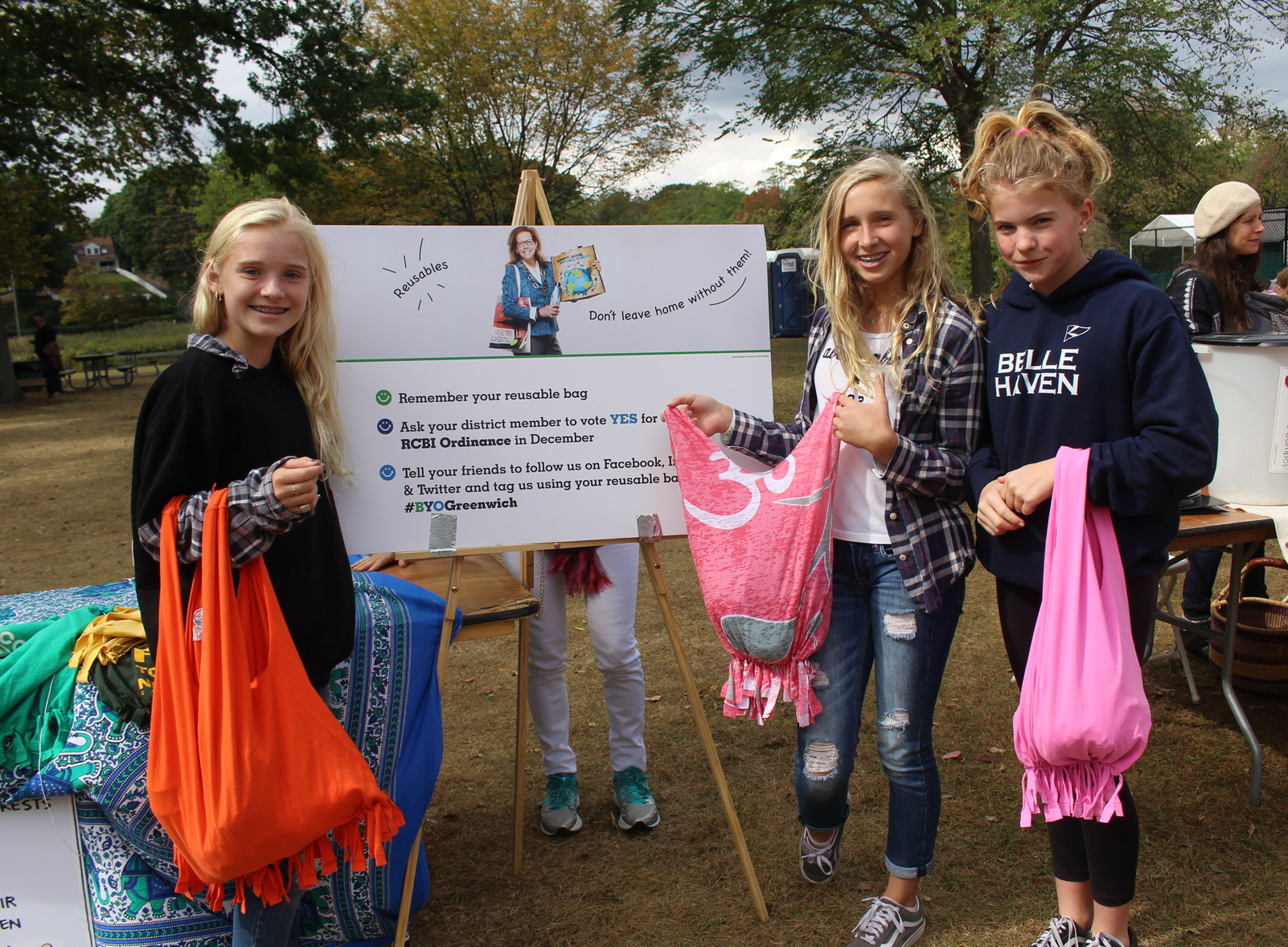 Also at the event were the innovators of Curbside Compost, an organic recycling service that allows households to have all their food waste collected for $6.00 a week in Greenwich.

Nick Skeadas and his wife Erica said the idea has really taken off and in addition to once-a-week pick-ups from residences they are in Ridgefield, Redding and New Fairfield where the towns have collection points at the town recycling centers. They also have composting programs at Greenwich Academy and GCDS in Greenwich.

The service provides households a power-washed clean pail that is swapped out for one full of food waste on Wednesday afternoons.  During the week, residents keep their pail either under their sink or in their garage, depending on preference, and put it out for pick up on Wednesday.

Their concept of food waste is broad, and includes, plants, coffee grinds and used filters, dairy, and all manner of scraps.

“We even take a whole coconut, meat bones, corn cobs and tea bags,” Erica said, adding that residents have the option of purchasing compost back from them for $10 for a 20-quart bag.

The Skeadas’ Curbside Compost, started a year and half ago, works with a composting company out of Danbury. Describing the process, Nick said the food scraps are mixed with a source of carbon, in their case dry leaves or wood chips. The mix is outdoors so it then benefits from rain or watering and finally, air. “The mix is placed on top of metal tubes with holes that pipe air through them,”Erica said. “We blow air through it so it doesn’t have to be turned by hand.” 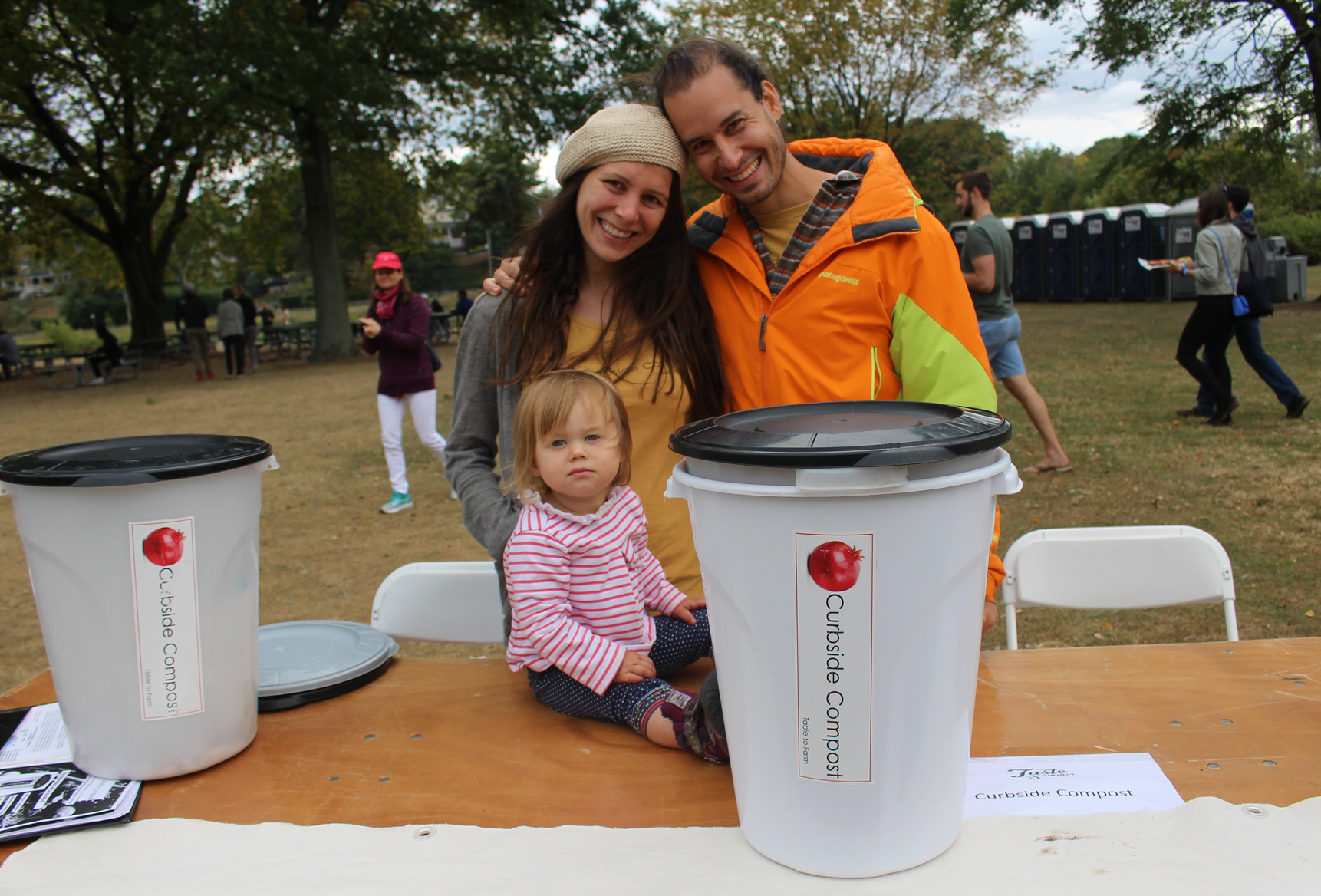 Erica, Nick and Genevieve Skeadas of Curbside Compost at The Last Taste of Summer, Sept 30, 2017 in Roger Sherman Baldwin Park 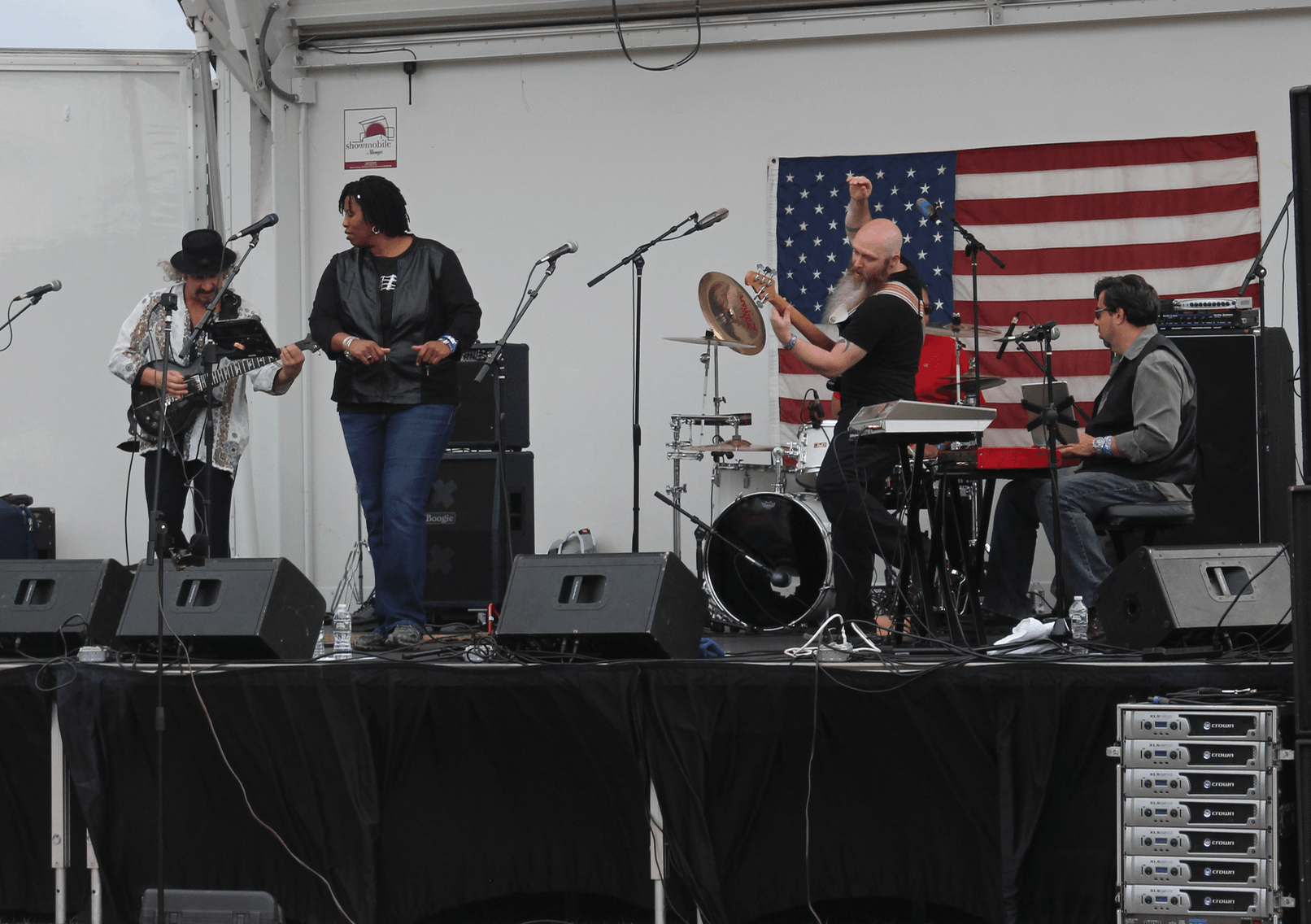 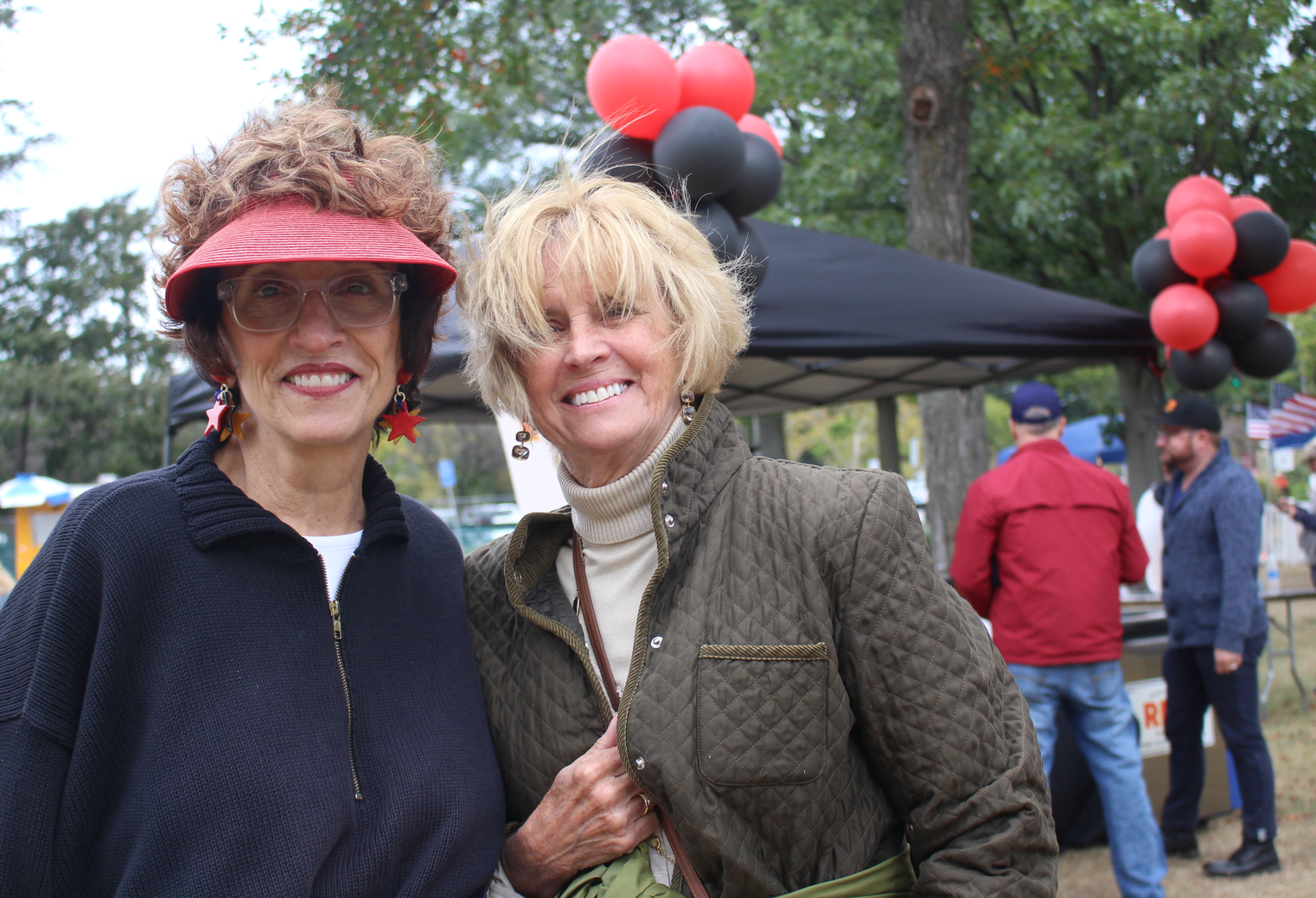 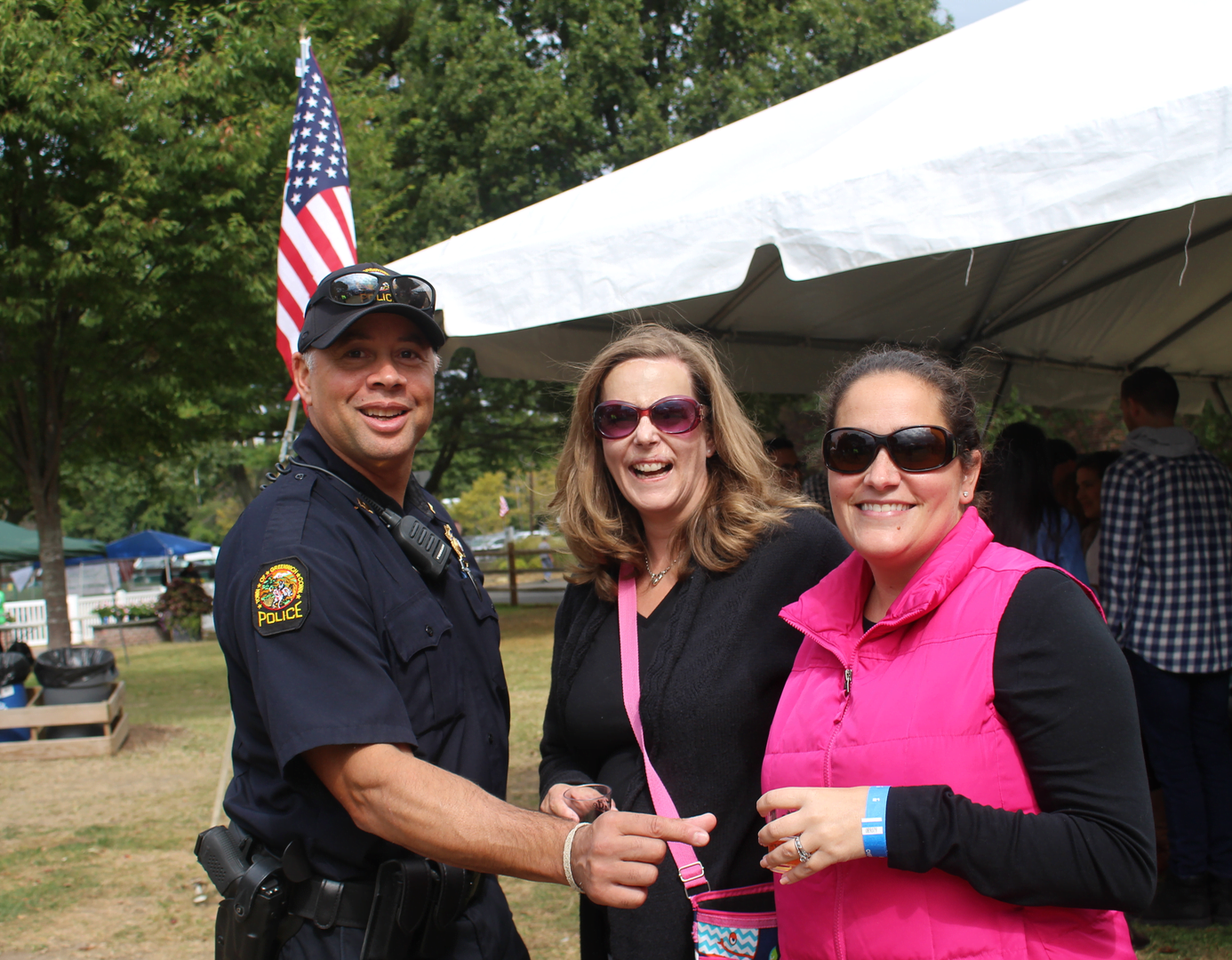 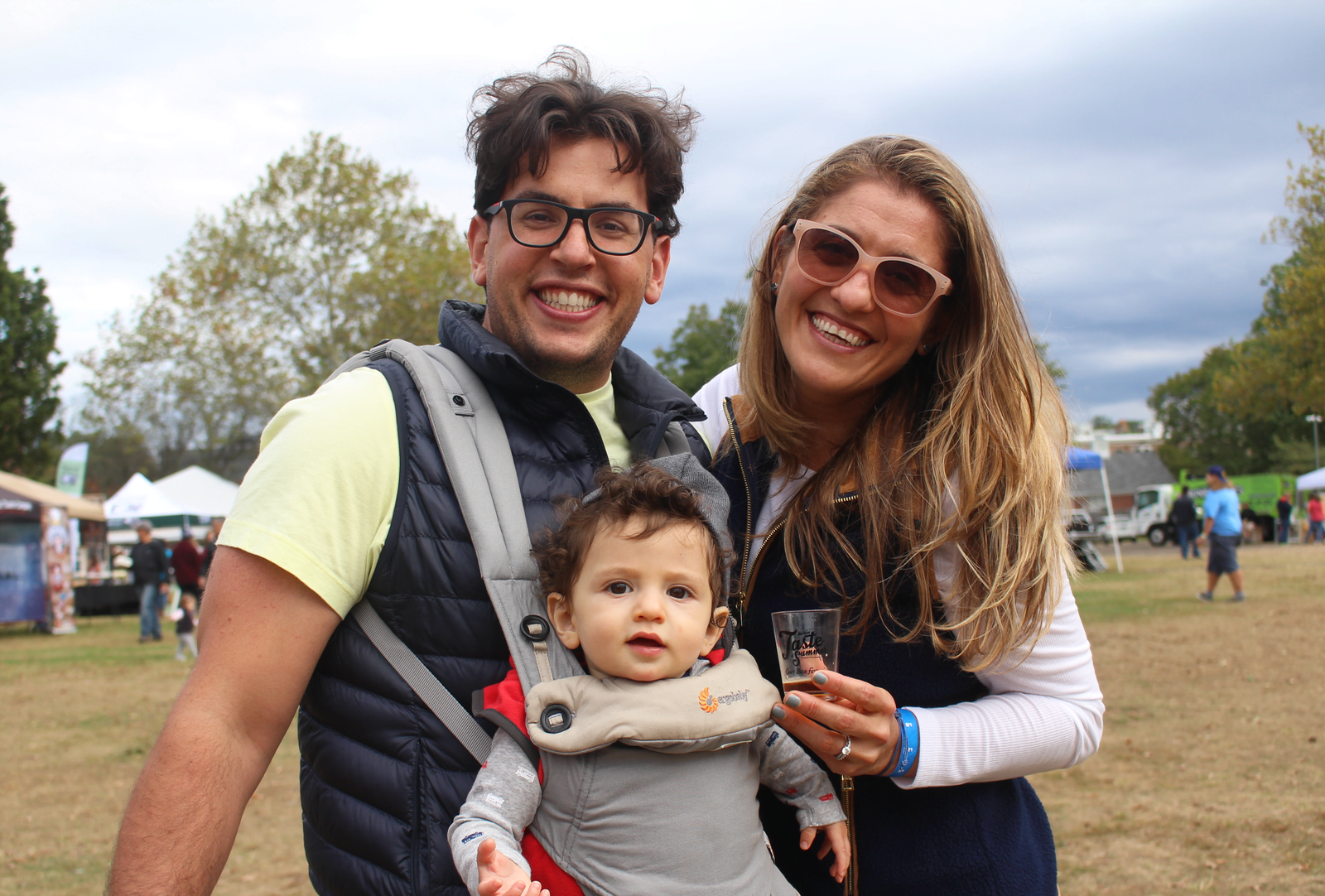 Abraham, Teresa and Julian at The Last Taste of Summer, Sept 30, 2017 in Roger Sherman Baldwin Park 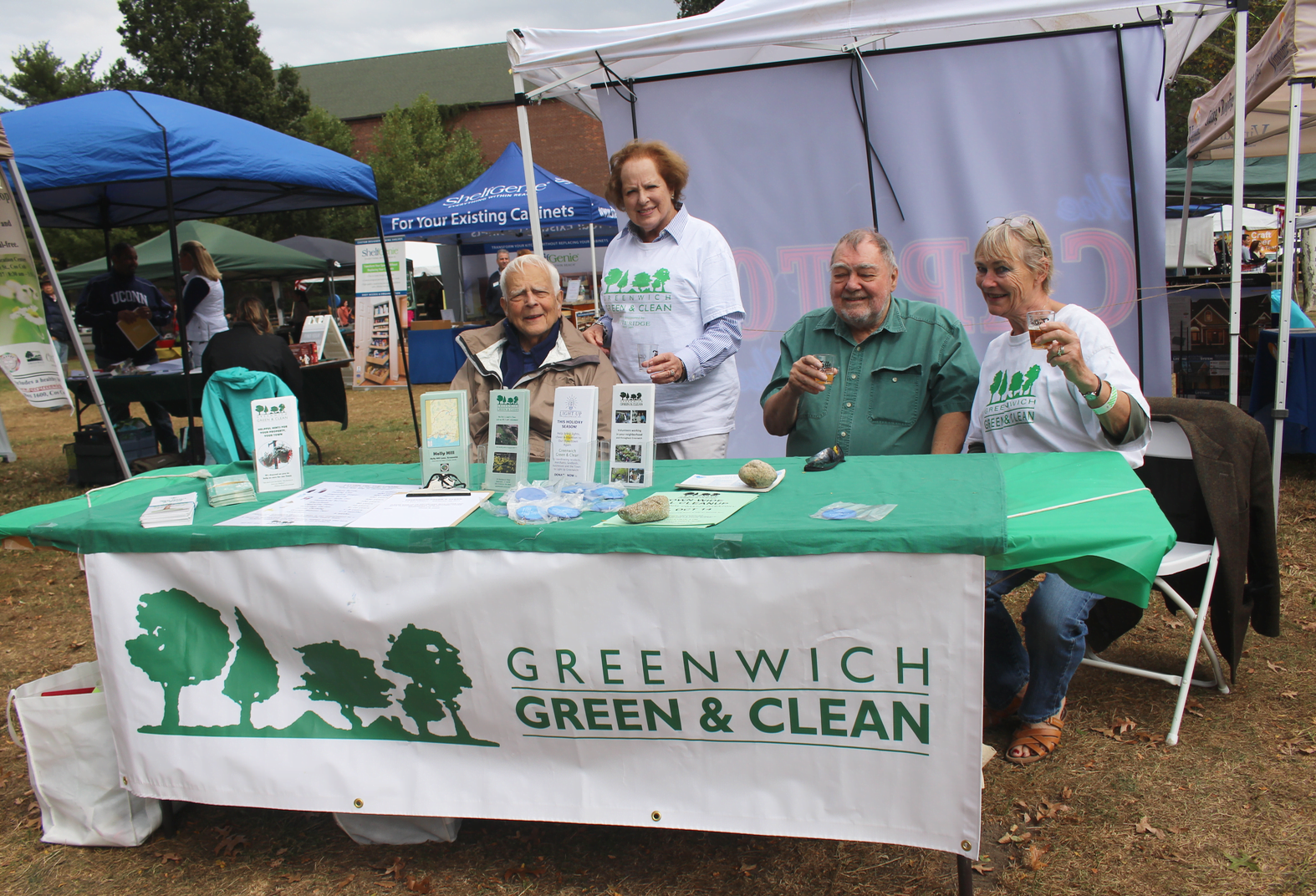 Lloyd and Mary Hull, Malcolm and Sally Davies at The Last Taste of Summer, Sept 30, 2017 in Roger Sherman Baldwin Park 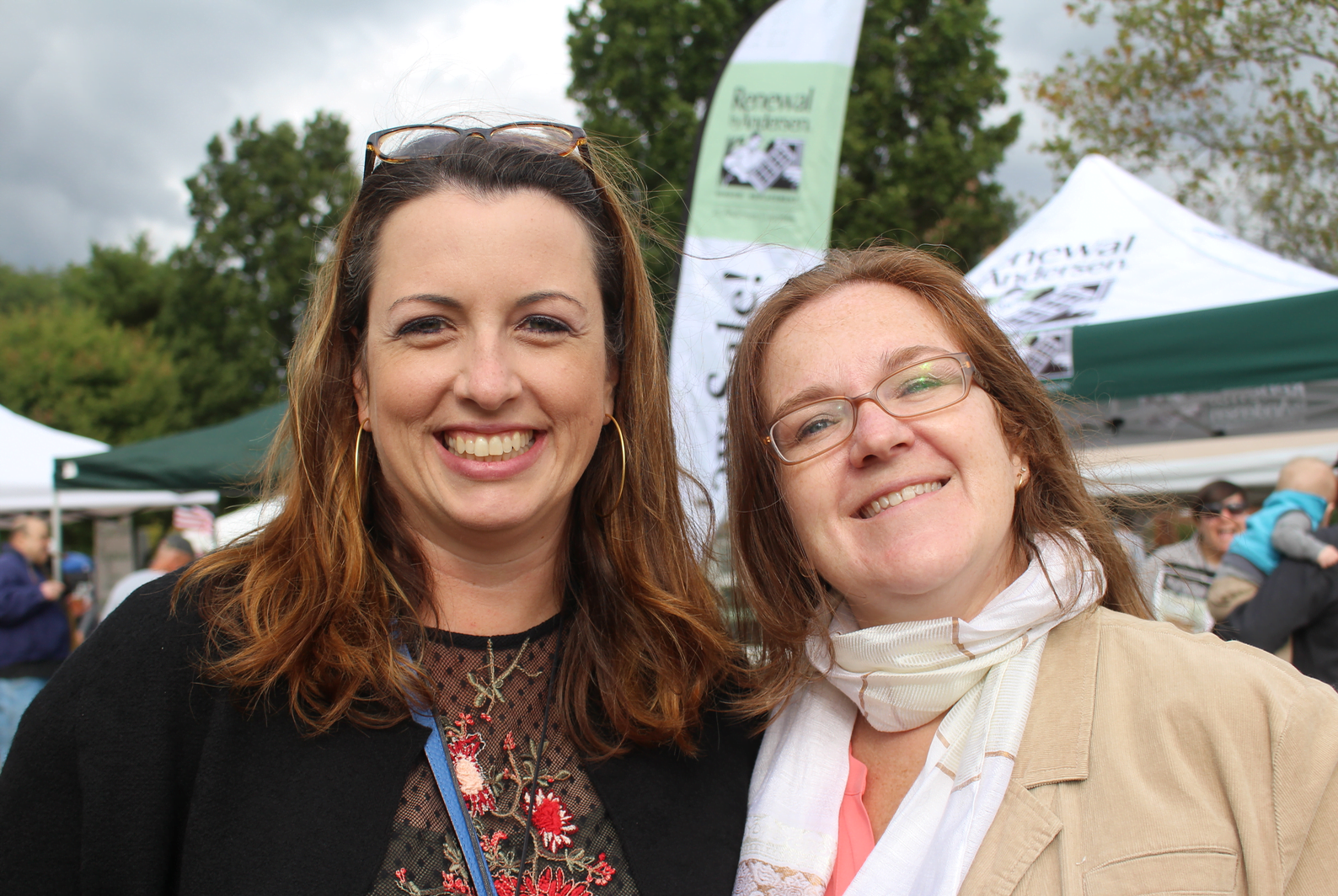 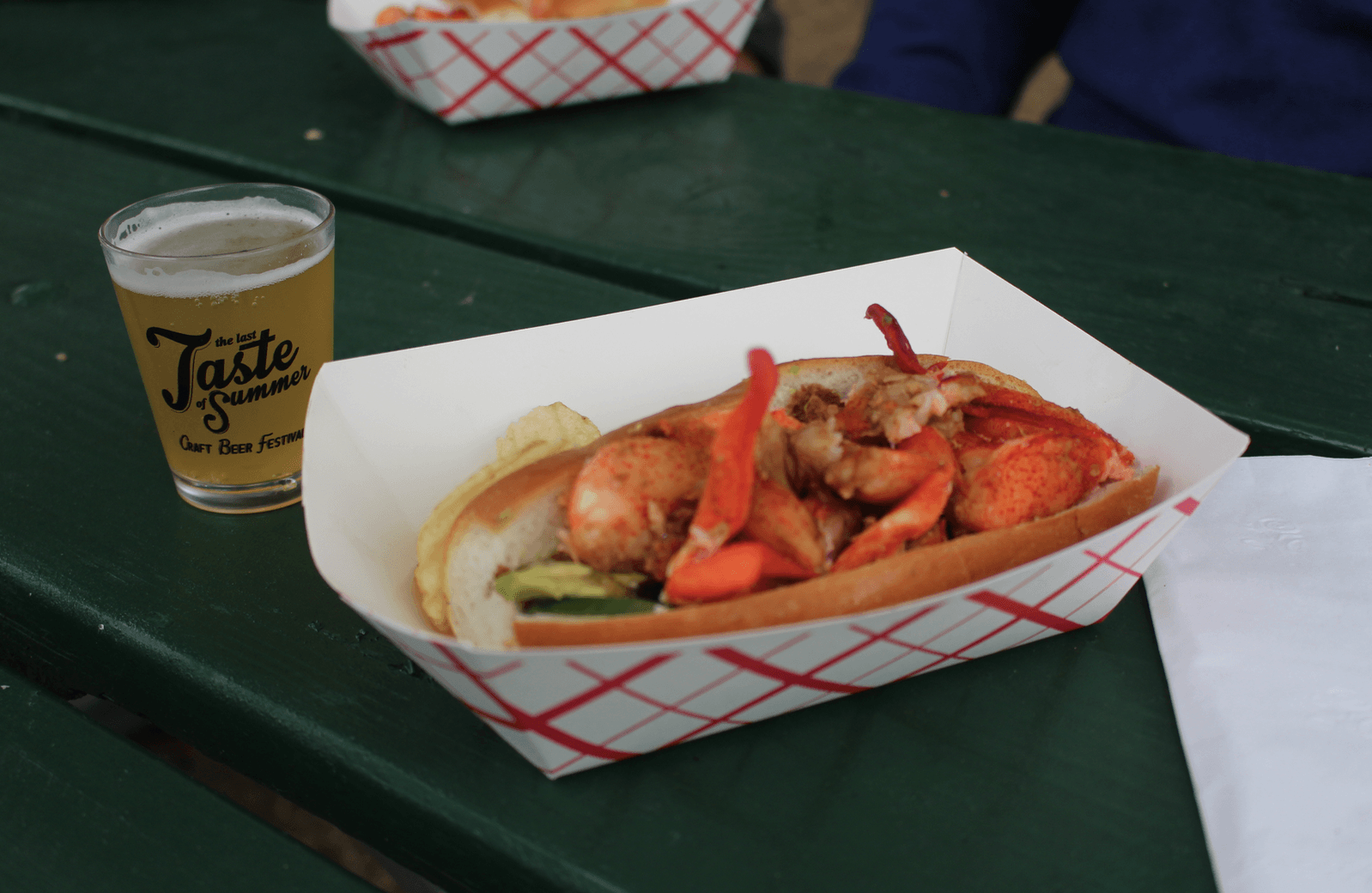 A taste of beer and lobser roll from the LobsterCraft truck at The Last Taste of Summer, Sept 30, 2017 in Roger Sherman Baldwin Park 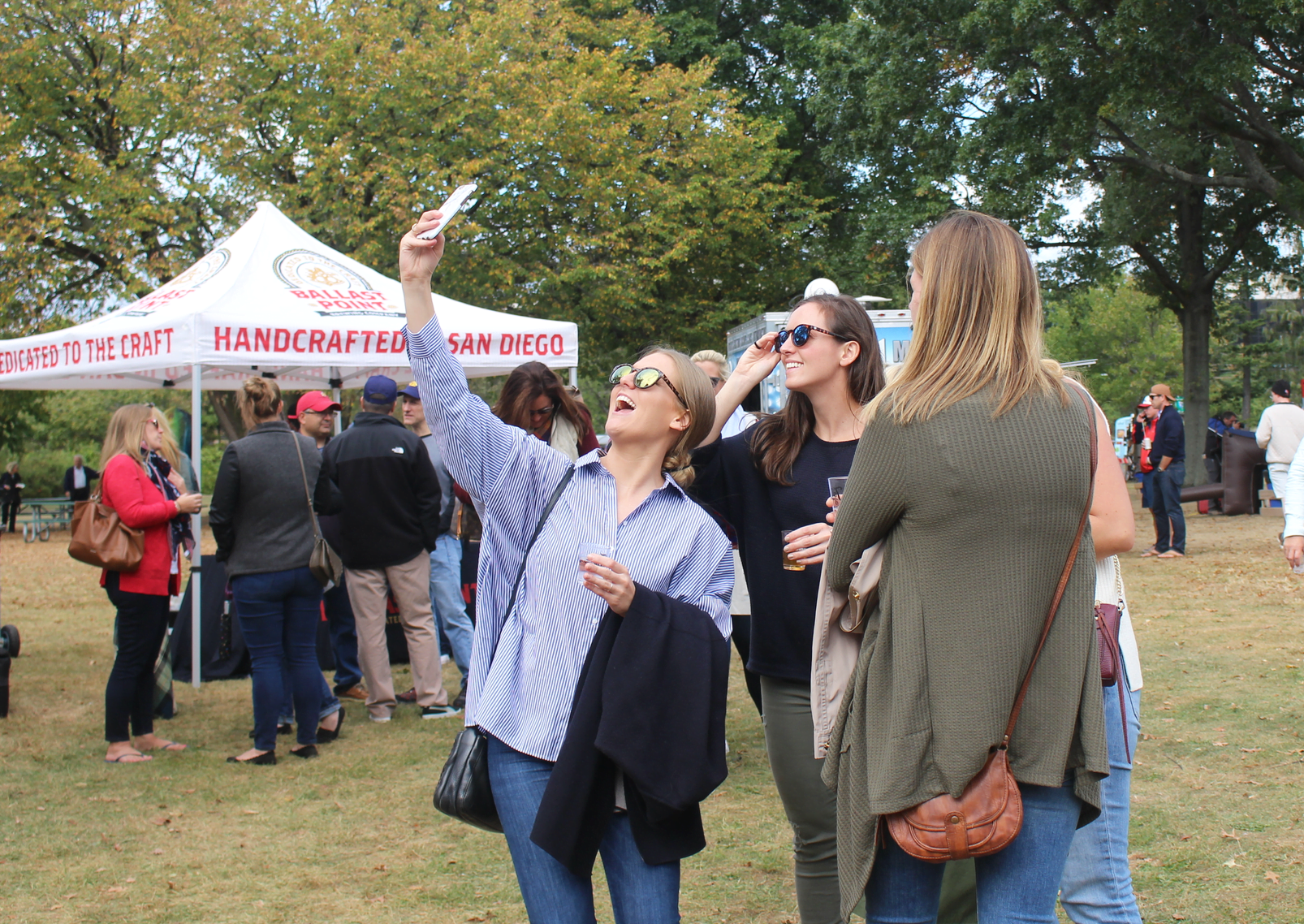 Selfies at The Last Taste of Summer, Sept 30, 2017 in Roger Sherman Baldwin Park 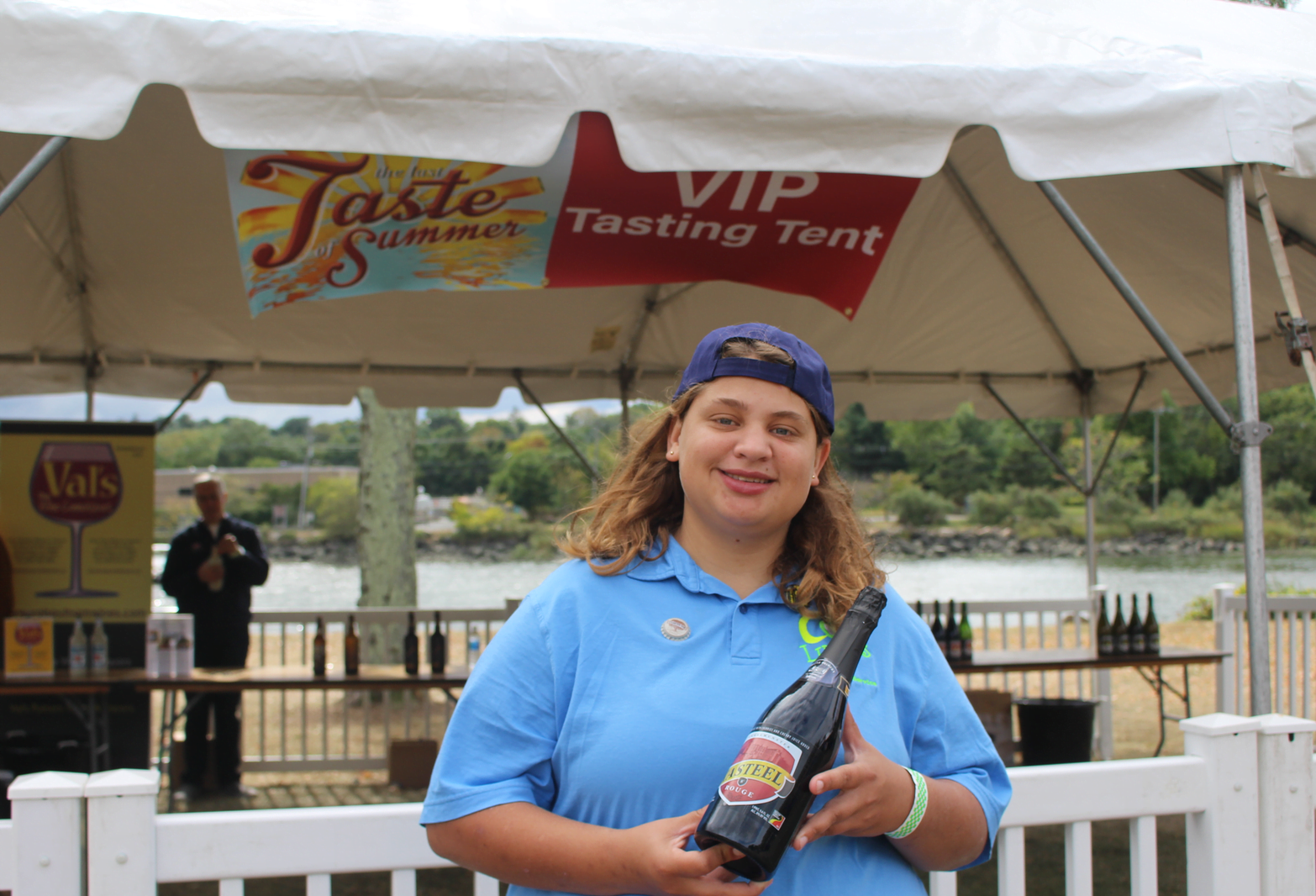 Luna Kodde working in the VIP tent at The Last Taste of Summer, Sept 30, 2017 in Roger Sherman Baldwin Park 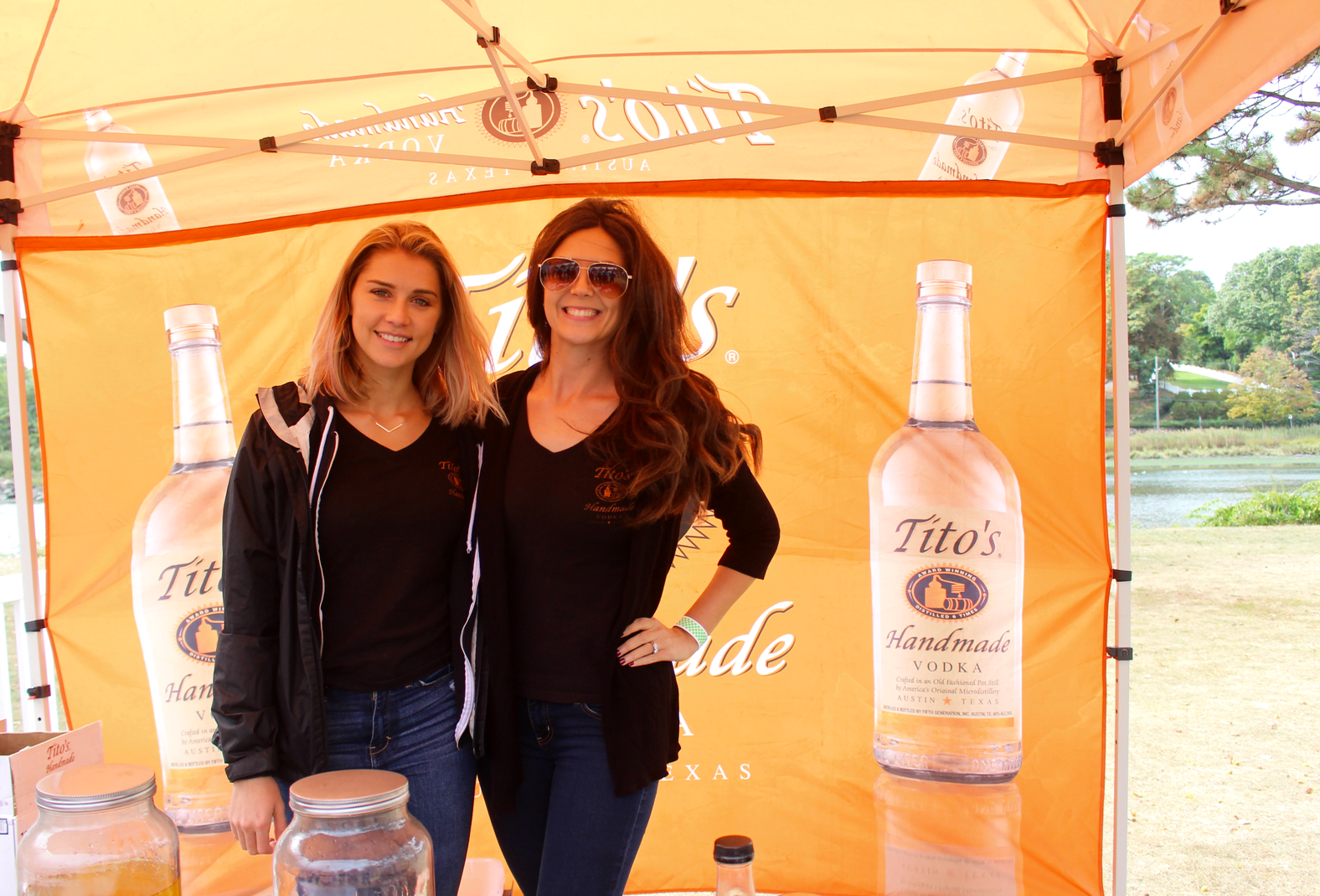 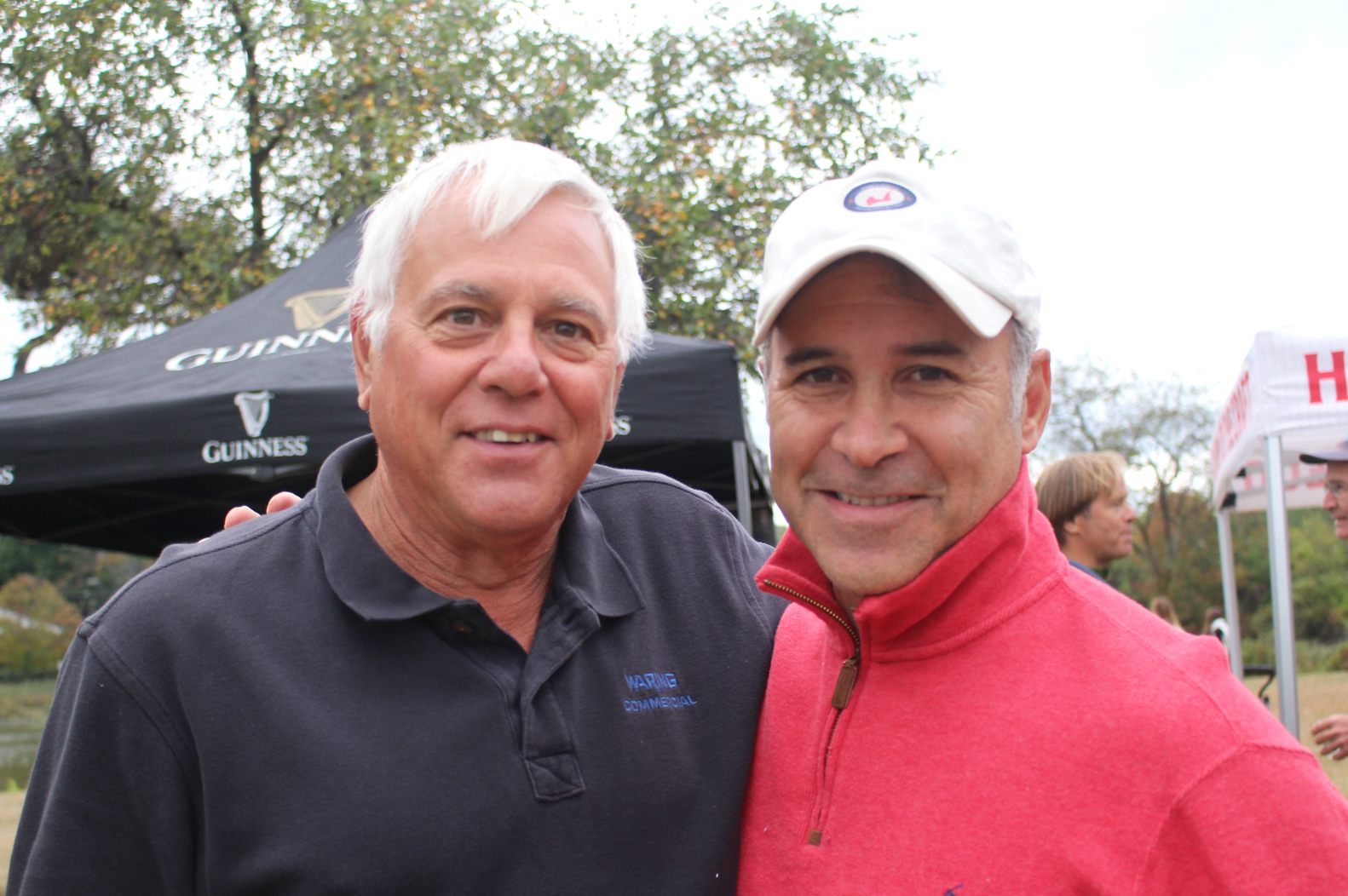 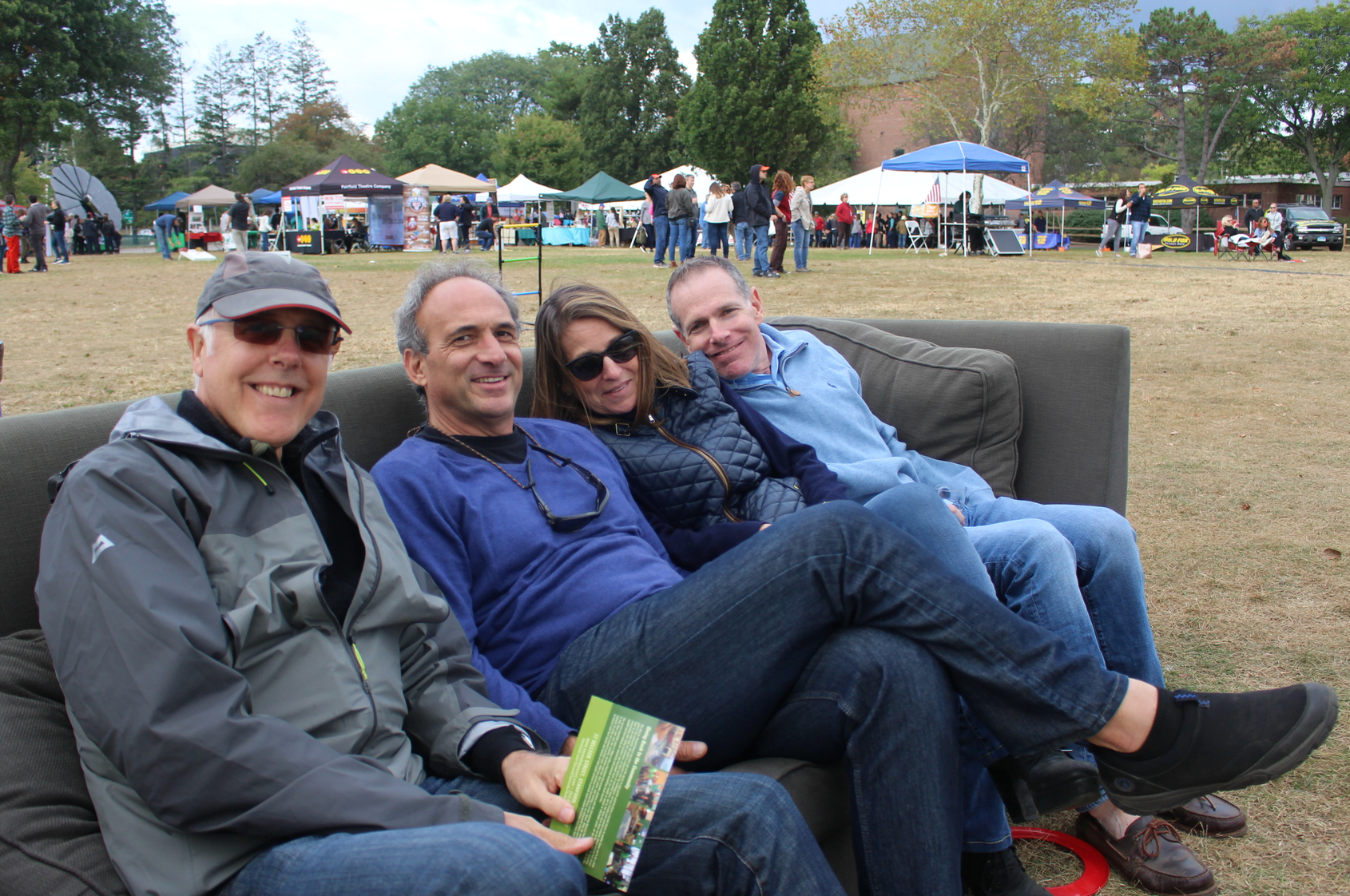